January was a month full of great events for me, as well as working towards my New Year’s resolution of completing my DT matrix and picking up a few Bring Back the Caches (aka Lonely Logs).

I’ve slowly been working towards a challenge cache in Ulster called 10 Lonely Logs (GC4DK10), where you have to ‘resurrect’ or ‘bring back’ 10 caches that haven’t been found for a year or more. While visiting friends in Cavan, I had a little look at some qualifying caches I could search for on my way home. This cache was one of two I ‘brought back’ on 3rd January.

It’s a multi cache located in the small village of Inniskeen in county Monaghan. The first part is a visit to the grave of the great Irish poet and novelist, Patrick Kavanagh. The cache then brings you on a circular walk down by the river. I really enjoyed this one. It hadn’t been found since August 2013, but all stages were still in perfect order. The walk was really lovely and I had a well deserved peppermint tea in the Poet’s Rest after finding the final. Well worth a visit, I can’t believe it doesn’t get found more often! 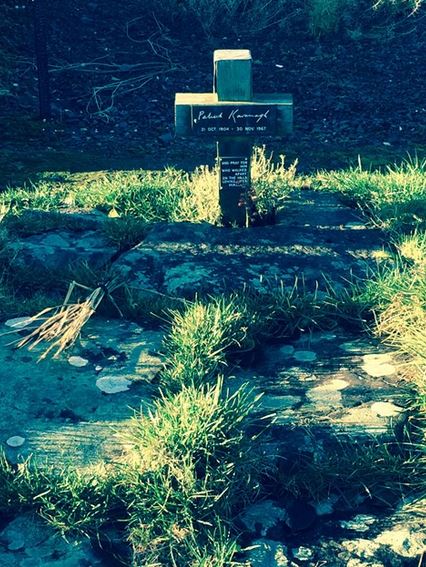 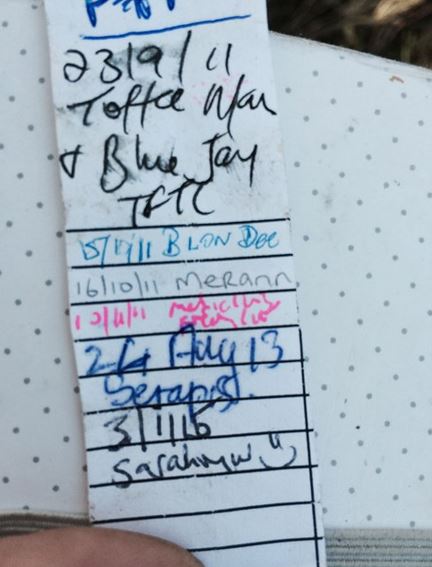 I had a day off work on 5th January and decided to come to St. Catherine’s Park in Lucan to try to finish the series of caches there hidden by local geocaching legend Blue Jay. Unfortunately, I didn’t manage to do them all but a return visit is not a bad thing! My favourite was this multi cache, which involved a field puzzle I haven’t come across before. Great fun. This series is very varied, and great fun for all the family in a lovely park. Highly recommended.

This event has been an annual occurrence for many years but it was my inaugural attendance. I had planned to go last year, but a torn ligament in my ankle on Christmas Eve (non-geocaching related!) meant there was no hiking on the cards for about 6 weeks early last year.

I was very excited to attend my first one, having heard great things from various cachers. This year’s event was held in Cruagh Woods in the Dublin Mountains. It was a cold day, but it was mercifully dry and we had a great time picking off the fantastic caches hidden in these woods by KowaiBaz, including Cruagh Cryptek (GC47Q6Y) – a multi involving a cryptex box, which we had great fun trying to open. That cache was also a new DT for me and the first of two new DTs that day. There was 41 separate ‘attended’ logs, and that doesn’t count the various team members, kids and geohounds who accompanied us.

The walk was topped off with a newly published cache – H is for Hezekiah (GC5HA39), which was placed in memory of a local geocaching legend, Hezekiah, who sadly passed away late last year.

After the walk, the group retired to the pub, but lulybelle, silver soldier and I took a small diversion to Massey Woods to pick up Dial 1-800-MASSEY (GC1C09W) – an eloquent little puzzle and my second new DT of the day. We went the shortest route and I ended up coming down the muddy bank on my backside, but it was definitely a memorable cache! We then joined the others in the pub for some well earned grub and drinks. 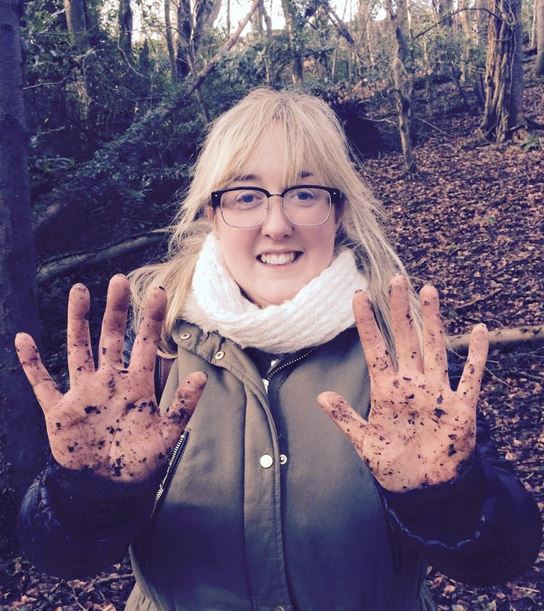 Four of us decided to car pool together and make our way to Belfast for the 11th Swedish Breakfast event and DucInc’s nearby CITO, as well as a plan to bring back a cache and find some others in between. I picked up Donnacha at 6.40am, before meeting the swerve, where he took over the driving. We then picked up silver soldier and were soon on our way up the M1.

The cheap as chips IKEA breakfast was very welcome when we arrived and I thoroughly enjoyed the geochat. We soon had to leave though, with the Cluedo Titanica (GC5HPG2) Wherigo cache in Belfast’s Titanic Quarter firmly in our sights.

This cache was a must-do, having done and thoroughly enjoyed the Cluedo Wherigo cache in Nice, which the CO, UlsterLatinos, had recommended to me. It didn’t disappoint, and I managed to guess the necessary clues within 3 accusations. A great fun cache, highly recommended!

We then hotfooted it across the city to bring back another cache before arriving at the CITO a little late. Some famous DucInc chocolate biscuit cake was enjoyed before we did some local caches in Hazelbank. The day was topped off with a trip to Cregagh Glen, with the night cache there the main target: Cregagh Glen Night Cache (GC4XJGM). Another great cache thoroughly enjoyed, and we managed to pick off the other caches in the glen at the same time (yes, in the dark!).

A very tired crew arrived back in Dublin around the 10pm mark after a fun filled day.

The weekend of the 24/25th January saw another trip up to Belfast on the Saturday; this time with me doing the driving and the swerve doing the navigating. We arrived just on time for the event and enjoyed the craic with the visiting Midlands geocachers and the local geocachers too. We then did several city caches, before heading back to the Titanic Quarter to grab some of the caches in that series before heading home at a more respectable hour than last week.

Sunday 25th was the geo-anniversary celebration of Fjon, who celebrated 10 years of geocaching! A great turnout and some fun watching a group of geocachers look for a nearby cache belonging to Daraconn. A great evening and definitely a milestone worthy of celebration.

With January just about done, I’m looking forward to what February has in store: at least two events coming up, and I’m sure, many more great caches!

1 thought on “Events, DTs and more events!! | The Geocaching Junkie”