Late last year, I was regaled with stories from Blue Jay and Toffeeman’s visit to New York City, specifically to do the Bridges & Arches of Central Park multi (GC17MX1). Blue Jay proudly displayed the geocoin she earned for completing it and raved about the cache – I was certainly intrigued. When I booked my US trip earlier this year, I booked a week on the East Coast, primarily to visit my sister and brother who live in NJ, but I always try to squeeze in at least one day in the Big Apple while I’m there. Having done most of the big tourist attractions multiple times before, I decided that this multi would make up my day in NYC.

Plans changed slightly in the summer, when my boyfriend decided to join me for the second week of my trip and we soon had a hotel booked near Times Square for a three day stay. Since he had never been to the city before, I promised we could do whatever sightseeing he wanted to do. All I wanted to do was one cache. Little did he know!

In the end, we split the cache over three days; altogether it took us about 7 hours to complete, entirely on foot. It’s possible to do some of the stages on bike but since bikes are only allowed to be ridden on the main paths, there would be a lot of dismounting and pushing the bikes around so we decided it wasn’t worth it.

Day One – The Southwest Corner of the Park

The cache has 32 stages in all and number one is located at the northwest corner of the park. I should mention here that the park is 843 acres and the stages are more or less spread across the entire area, so there is very little that you won’t cover. What a fantastic way to explore the park though! Tourists tend to stick to the southern part of the park and that was previously my experience too. Now I can say I’ve almost seen it all!

On day one, we managed to get nine waypoints under our belt before darkness shooed us out of the park and back to the bright lights of 5th Avenue. There is always a fear with multis that you haven’t counted correctly or picked up the correct number, but each waypoint has an ‘error check’ where you can use another number to check that your first number was correct. This was invaluable to reassure us that we were unlikely to have to backtrack, and also proved useful at one waypoint on day two, as the immediate arch area was closed off so we had to rely on the error check.

On day two, we caught the subway to 86th street and worked our way south again, picking up the stages in the middle of the park. We also managed to find two virtual caches, The Castle (GC4D82) and Central Park Guardian (GC3CFC), as well as a very cool earthcache, Cleopatra’s Needle – New York (GC59BR5). We really didn’t have time to find any of the other numerous caches in the park, as we still wanted to do lots of non-geocaching things and needed to get most of the waypoints done so we only had a minimum to do on the last day! We managed to get fifteen ticked off on day two, which left us with only eight more to complete on the final day.

I wrote a note on the cache page on days one and two and was pleasantly surprised to receive an email in the evening of the second day from the CO, addisonbr, giving me his cellphone number in case I needed him to check numbers when we looked for the final.

We started the day by taking the tour bus (which we had bought a 3-day ticket for) to the northwest corner of the park and again working our way south. We had just eight more waypoints to do, but these were much more spread out than the previous two days.

We managed to nab one virtual on this day too: Central Park Highpoint (GC3CF8), near to our starting point. Central Park North is not somewhere I had ventured to before but it’s much more untouched than the tourist thronged southern part. We even saw a black squirrel – something I didn’t even know existed until my event a few days previously in Princeton when an attendee told me they were common in that area. There were lots of chipmunks there too, which is something out of the ordinary for a European!

The bridges and arches in the northern part of the park were by far my favourite. Particularly the two bridges near the reservoir, which is in itself, something special to see, even boasting its own geyser!

After we did all the necessary walking, we had the all the necessary numbers in hand and sat down to work out the final coordinates. We got an acceptable set of numbers but with no internet access to utilise the checker, we couldn’t be sure. I didn’t want to contact the CO unless it was completely necessary so off we set – did I mention we weren’t exactly near the final? There was no way we were quitting at this stage, although the soles of my feet were definitely protesting!

Eventually we made it to what I hoped was GZ but it took me a few minutes to uncover the cache. The hint is pretty good when you get there, but doubt had set in. It turned out I had the cache in my hand without realising it almost immediately. I revisited the same spot and following a closer inspection, I laughed when it clicked that I had already picked it up as soon as I arrived.

Elation is too small a word for what I felt – all that work and it paid off, I could log a find on this most epic of multicaches! The CO regularly tops up the cache with special, limited-edition coins so that each finder can take one as a souvenir, but unfortunately, there were no coins in the cache when I found it. However, the CO kindly agreed to send me a standard coin and also a trackable coin, since I donated to the Central Park Conservancy. My envelope came last week but alas, someone in either the Irish or US Postal Service took a fancy to the coins and took them :(. The CO’s generosity knows no bounds though and he has agreed to send me some more, but this time they will be staying within the US and going to my sister, to be picked up by The_Mother in a few weeks!

This cache was undoubtedly epic and at times hard-going but I highly recommend it – it’s definitely special and memorable and the 400 plus favourite points attest to that. If you’re going with a non-geocacher, you will need to make sure they are very understanding or perhaps use bribery to make them more enthusiastic ;). 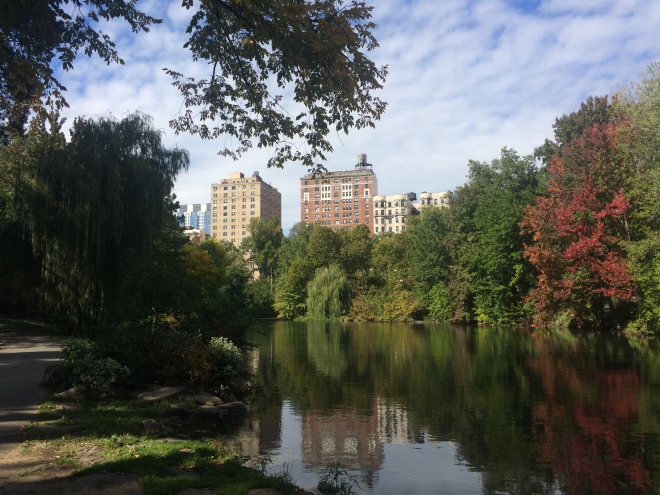