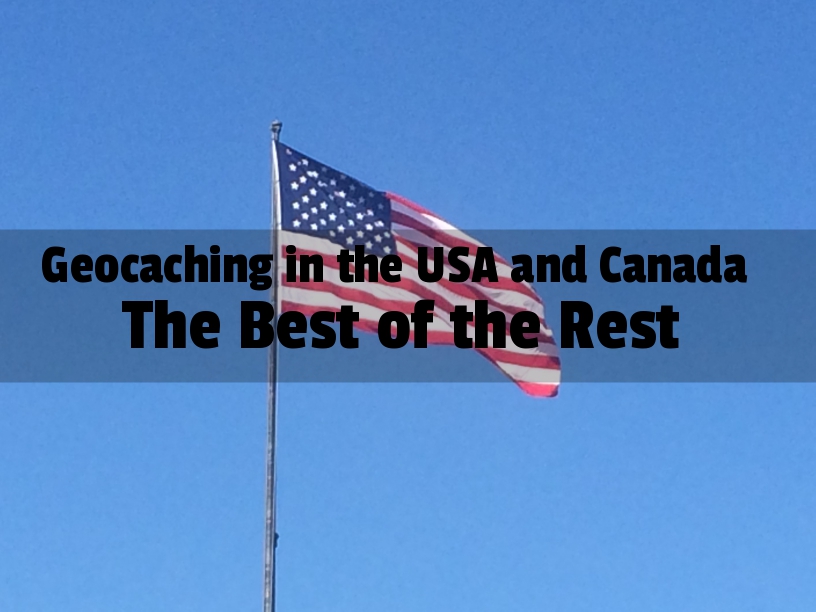 I have already written about the big highlights of my trip, so the below is a round-up of the best of the rest!

The morning after I arrived in Portland, my friends and I headed to a local German bakery for brunch but en route, I suggested we look for the geocache closest to their house. I pulled out my phone and we started navigating to The Atomic Penguin (GC46MZW). I had no idea that the nearest cache would be so awesome!

The cache was hidden in the boot of a convertible that had a tree growing out of it. Not only that, but the actual container was a huge chest full of cool swag for kids with a separate box for trackables.

A big part of my trip in the Pacific Northwest was collecting old caches to help fill up my Jasmer grid. When I had a whole day in Portland to explore by myself, my main aim was to tick off four required months for the Jasmer Challenge.

My favourites were the two multi geocaches I found in Washington Park: Sacajawea (GCHN0Z) and Coming of the White Man (GCHK0H). I ended up going to the park twice as there were too many muggles on my first visit, but I was glad to finally tick off the two required dates.

Sadly I had terrible weather in Vancouver and frustratingly, I also spent way too much time sitting in traffic, so I didn’t get to do as much geocaching as I would have liked but I enjoyed the places that the caches I did find brought me.

My favourite cache was the first one I found in Vancouver. I had a little bit of daylight left on the day I arrived, so I decided to go for a walk and look for some caches. Unfortunately, my hotel was in a geocache void. I had to walk nearly a kilometre to get to the closest one, so I ended up only finding the one: Cedar Cottage Free Library (GC5H64R).

The cache was hidden in a little wooden shed-like structure that had books for people to borrow and replace with another book for others to borrow: what a cool idea!

I spent the next morning geocaching in Stanley Park, although it rained almost non-stop. I managed to find just six caches but a lot of my time was spent marvelling at what the park had to offer. My favourite cache in the park was Lost Lagoon TB Hotel (GC5QKZD) – I had never seen such a big fake rock before, I struggled to lift it!

I held an event (Meet the Irish – Vancouver, GC63DW6) in the evening in an Irish pub called Dubh Linn Gate, and really enjoyed the company of the locals and two visitors from Slovakia!

My first day in Seattle was an epic Jasmer geocache hunt, mainly around the suburbs around Seattle. I met Grievous Angel who very kindly drove me around to lots of caches to fill up my grid.

Forbes Cache (GCD29) was particularly memorable from that day. Having been hidden in the same spot over fourteen years ago, there was a fair few overgrown trees and bushes to contend with. I tried to crawl through but in the end, I had to take off my watch and my jacket, and commando crawl to GZ! I ended up with dirty knees and my name in the logbook – success!

The day I went to Groundspeak HQ, I attended the event Emerald Isle to Emerald City (GC63VBM) in Everett, kindly hosted by GrievousAngel, and I relished the chance to meet some local geocachers again!

The day after I arrived to my sister’s in New Jersey, I hosted an event (Meet the Irish – New Jersey, GC63DR2) just down the road in Princeton. I really enjoyed meeting the local geocachers in the sunshine at the Princeton Battle Monument.

A smaller group of us had lots of fun doing the nearby field puzzle Ode to Einstein (GC64GFDW). I think the CO enjoyed watching us trying to figure it out too! Princeton is a lovely place to walk around, and there are a few nice geocaches to boot!

Since I have been to the Big Apple a few times before, I have already seen most of the major tourist attractions. One of the things I wanted to see this time was the Irish Hunger Memorial in Battery Park.

I hadn’t pre-planned it but there happened to be a mystery cache right at the memorial, An Gorta Mor (GC1PQRA). As luck would have it, it turned out be essentially field puzzle for me, since the crux of the puzzle was knowledge of another language, which I just happened to have learned at school for 15 years 😉

The memorial is a ruined stone cottage from the West of Ireland, which was transported to New York and rebuilt there. The site also has stone, vegetation and soil native to Ireland.

On our last full day in the US, we got the train to Philadelphia for the day. We managed to do five virtuals during our short time there, all of which uncovered secrets about the city that we didn’t know about and probably wouldn’t have otherwise found without the geocaches.

Hop-A-Long (GCDC97) brought us to Rittenhouse Square, which was my favourite hidden gem in the city. The park is a beautiful green space with amazing pieces of art on display, definitely worth a visit!

And so ended my fantastic fifteen day trip to the USA! I managed to earn seven new souvenirs when I was there, and of course, found two thirds of the Geocaching Triad, as well as filling nineteen months in my Jasmer grid!

It was definitely unforgettable, my only regret is that I didn’t find enough caches but there is always the next trip 😉