Get lost in the crowd at Pike Place Market, join the hordes at the Space Needle, visit the Museum of Flight – all par for the course on a trip to Seattle. But why not uncover the below secrets while you’re in the Emerald City?

1. Marvel at the Gum Wall underneath Pike Place Market

Yes, it is a wall of gum. Pretty icky really but nevertheless, a somewhat popular tourist attraction in Post Alley, below Pike Place Market. The tradition began over twenty years ago, in 1993, when theatre goers starting sticking their used gum to the wall. Workers attempted to scrape it away twice but it kept returning and in the end, they let it be. The wall has grown to take over both sides of the alley. 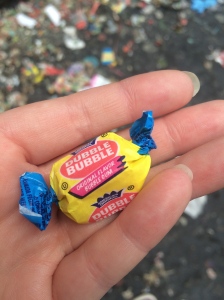 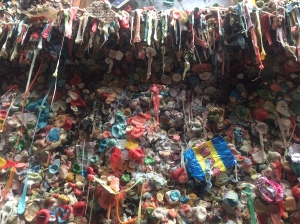 The wall is due to be cleaned for the first time in many years in November 2015 in an attempt to preserve the old buildings in Post Alley. However, if you can’t make it before then, fear not: it is fully expected the colourful display will slowly come back. Why not add to the new wall? Don’t forget your gum!

2. Get a photo with the Fremont Troll

The People’s Republic of Fremont is a neighbourhood in the north of Seattle, where the motto is ‘De Libertas Quirkas’ (freedom to be peculiar). Fremont is home to various quirky artworks and monuments and the king of them all is the Fremont Troll.

Aptly located at Troll Avenue N under the George Washington Memorial Bridge, the mixed media sculpture stands 5.5 metres high and is holding a Volkswagen Beetle car in his left hand. Visitors are encouraged to climb all over him and even attempt to poke out his eye. Try it for yourself!

3. Check out what Lenin is wearing today

Staying in Fremont, head to the corner of N 36th Street and Fremont Place and check out what the bronze statue of Lenin is wearing for the season. The sculpture is a work by Bulgarian artist Emil Venkov and was found by American Lewis Carpenter lying face down in the mud in Slovakia following the 1989 revolution.

The sculpture is unusual in that it is believed to be the only portrayal of Lenin surrounded by flames, instead of holding a book or waving his hat.

At Christmas time, Lenin can be seen donning twinkly lights and a glowing star. During Gay Pride week, he is dressed in drag. When I saw him in October, somebody had kindly dressed him in a woolly scarf, to guard against any autumn chill.

4. See the tree that grows chairs

Before you leave Fremont, head on down to N 35th Street (near the corner with Phinney Avenue) and have a look for an unusual tree. A tree full of wooden chairs to be precise. That’s a bit odd, isn’t it? But therein lies the beauty. The tree truly encapsulates all that is cool and quirky about Fremont!

While you’re here: can you smell that chocolate? Wow, Fremont smells delicious doesn’t it? That choctastic aroma is thanks to Theo Chocolate just across the street. You can take a tour of their factory too!

5. Beat the queues and opt for the twinkly view at the Space Needle

I have been told that visiting the Space Needle is ‘so cliché‘ but I felt a need to go there while in Seattle. One of the worst parts of travelling is the queues to get in to every popular tourist attraction. Not so if you visit the Space Needle at night! Go an hour before it closes and enjoy the twinkly view with little or no waiting!

You can check out the opening hours here. If you really love views, opt for the Day/Night Ticket that allows you two visits and come back the next morning for the daytime view!

Do you know any Emerald City secrets? Let me know in the comments!