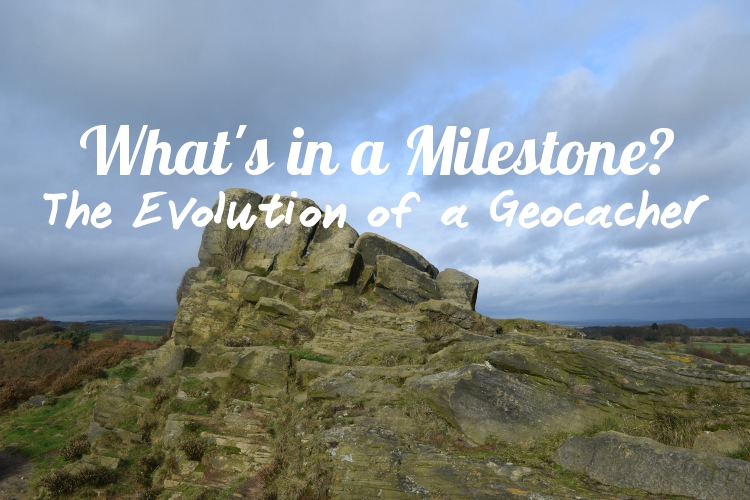 I recently found my 2,000th cache (huzzah!) and upon glancing at my milestones statistics on geocaching.com, I was reminded of various caches that Groundspeak consider to be milestones. For me at least, the first milestones (1, 5, 10 etc) meant nothing at the time. I didn’t even know that milestones were a ‘thing’. It was a simpler time really. But I digress. Looking back now at the caches listed as milestones (seventeen of them to date), I started reminiscing about all the caches that are marked as significant in my geocaching history and how the way I geocache has evolved since my first find.

Although some may not stick out in my memory, there’s no doubt they show my evolution as a geocacher – from how I wrote my logs to what caches I did as milestones, and even what photos I uploaded!

This wasn’t even really my first ever cache. The obsession with logging caches in the exact order they were found didn’t come until long after. I did, however, find this cache on my first day of geocaching.

I was reluctantly brought along with family visiting from England to find some of these ‘G-O-cash’ thingies in the local area. As soon as I found my first one (which was really “The Bray Heads” Cache (GC3G6G7), I was hooked! That cache was archived a few months later, so I hid a tribute cache of sorts in its place: #4 – A History of Bray: The Bray Head Inn (GC507RH)

Again, I’m not sure if the order of caches was correct on this day and I had no idea that we had done a letterbox hybrid cache, or indeed that there were even different types of caches.

I do recall I found a geocoin on my first day and I ended up bringing it with me to Chicago about 6 weeks later and placing it there! I was lucky I had the guidance of family members when I started out. I’m sure geocaching must be a bit of a mystery if you start out without a mentor of any kind.

I found this one just five days after I started geocaching. The_Mother and I went for a walk in a park I had only seen a small part of before, but now I own at least 5 caches in there! We spent ages looking for this one, and it was getting dark when we left but we weren’t giving up until we found it!

By number 25, the geocaching obsession was seriously ramping up and I did quite a few caches along the Blackrock Power Trail on this day. I think this was around the time I really started honing my geosense and this trail offers a great variety of hides so I saw lots of different container types. I still couldn’t spell ‘muggle’ though 😉 (refer log below…)

We found seven caches that day, which was quite a feat – or at least it felt like it then. This cache was particularly brilliant and the first of its type I’d found. Finding something I hadn’t seen before was, of course, quite a frequent occurrence in the early days. Every now and again, I still find something new though it’s undoubtedly more rare.

This was found on a second visit to the park that I found number 50 in. A glance at the log now makes me cringe: “Easy find TFTC”. As a cache owner, I don’t particularly like those logs, especially when it was meant to be easy (D1/T1 anyone?). Thinking about it now, the cache was hidden near a lovely wooden carving of Thumbelina. Why didn’t I mention that? Ah hindsight is a wonderful thing, isn’t it?

I don’t remember much about this particular cache but I did enjoy this series. My log tells me I was aware this was my 100th cache but I didn’t choose it especially to be my 100th. That planning didn’t kick in until find number 200….

My 200th cache was the first time I actually planned a milestone. It was a great night! One of my first events and I got to meet some new people who I can now call friends. I was still nervous going in as I only knew a few people and even those I’d only met once or twice. Everyone was very welcoming though and to date, I have been to 79 event caches, so it’s safe to say I wasn’t scared off that day.

This cache was not really planned – I did want to get my 300th milestone in the UK so in that sense, it fit the bill. It wasn’t a particularly memorable cache but it was nice to do a milestone with the English rellies who had gotten me into geocaching in the first place.

That was a relatively quick 100! I had been geocaching in London in between so that boosted my numbers and I wanted this, my first CITO event, to be my milestone so I made sure I got the caches I needed in the lead up. This event was great fun too and I have hosted many CITO events since, so it obviously made an impression.

Looking back at my milestones up to this point, I’m disappointed I didn’t upload more photos – I’m sure I took them but I have no clue where I’ve saved them!

With my 30th birthday coming up, I decided I wanted to visit the Giant’s Causeway for the weekend in question so The_Mother, Olly the geohound and I headed up to the North Antrim Coast for the weekend.

I planned this cache to be my 500th and it really was very special. I have been back to the Giant’s Causeway again and hopefully it won’t be my last visit as it really is a magical place.

I really came prepared this time, bringing my first ever milestone geocoin with me to photograph!

I was seriously in to planning milestones at this stage and THE_Chris suggested I do earthcaches for all my milestones up until 1,000. Why not? I do love earthcaches! This one was difficult but fun and in a great location. I’m still a bit perplexed why I didn’t upload any photos to the cache page.

Another scramble for an earthcache as a milestone. This one was relatively close to home but somewhere I hadn’t been before. Oh, did I mention it was windy?

Another milestone while visiting Saffron Walden. Earthcaches were thin on the ground and it was imperative I got one as my 800th to continue my earthcache-as-a-milestone streak!

This is a beautiful part of Dublin, right near where I work. I’m not sure I ever would have visited if not for this cache and the others there (I still have a few to find too so a return visit is definitely on the cards!)

Now this one was really special! I wanted to do my big 1k milestone while on holiday in France and Italy and, of course, it had to be an earthcache.

I had various ones picked out. I had also read up on Milan Cathedral and knew it was made of a particular marble and thought to myself, “this place deserves an earthcache.” So I did more research and planned to do my onsite work while I was there before submitting for publication. Mere weeks before we travelled, this cache was published! It was fate – this was to be my 1,000th geocache and what a great one it was too!

I had forgotten about the earthcache-as-a-milestone thing at this stage but I wanted to have a somewhat special cache for number 2000 and this cache looked like the one I would enjoy most while visiting family in Derbyshire. An earthcache and a view – two of my favourite things 🙂

We had the place to ourselves and we even got a break in the rain so we could really enjoy it. There’s an old bunker here (locked up though) and a triangulation point (I had never seen one of them before), as well as the impressive rock, so it was very worthy of my 2k milestone.

Now that I’ve done earthcaches for the last seven milestones, I wonder will I feel obliged to do the same at 3000? Time will tell!

Have a look at the logs on your milestone caches – have your logs changed since the first one? Do you plan your milestones? Let me know in the comments!

7 thoughts on “What’s In A Milestone? – The Evolution of a Geocacher | The Geocaching Junkie”