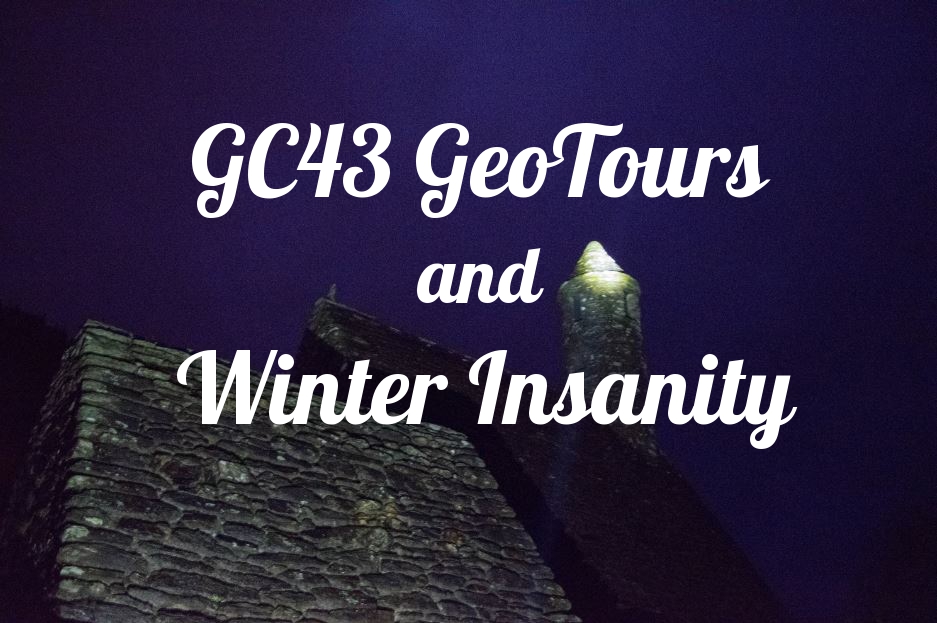 A couple of months ago, I discovered on Twitter that Oh Beep! was planning a visit to Bray on a pilgrimage to Europe’s First. He planned to meet StaticJay and make a geocaching assault on the town. I was shocked to find no event was planned so I quickly got to work righting that wrong and soon Oh Beep! & StaticJay Come to Bray was born!

I offered to give them a ‘GC43 GeoTour’ of Bray before the event so after meeting at the DART Station, we set off in search of several caches (most of them mine!).  It’s nice to revisit your caches every now and again, even if there are no reports of any issues, if only to remember why you hid a cache there in the first place.

I enjoyed the dash between caches and watching them make their pilgrimage to GC43, as Oh Beep! triumphantly lifted the ammo can above his head.

It’s a unique thing about geocaching. Sure, you make friends at local geocaching events but there’s also this worldwide sense of community in the game. I met these guys on Twitter and now here we were, geocaching together in my home town! 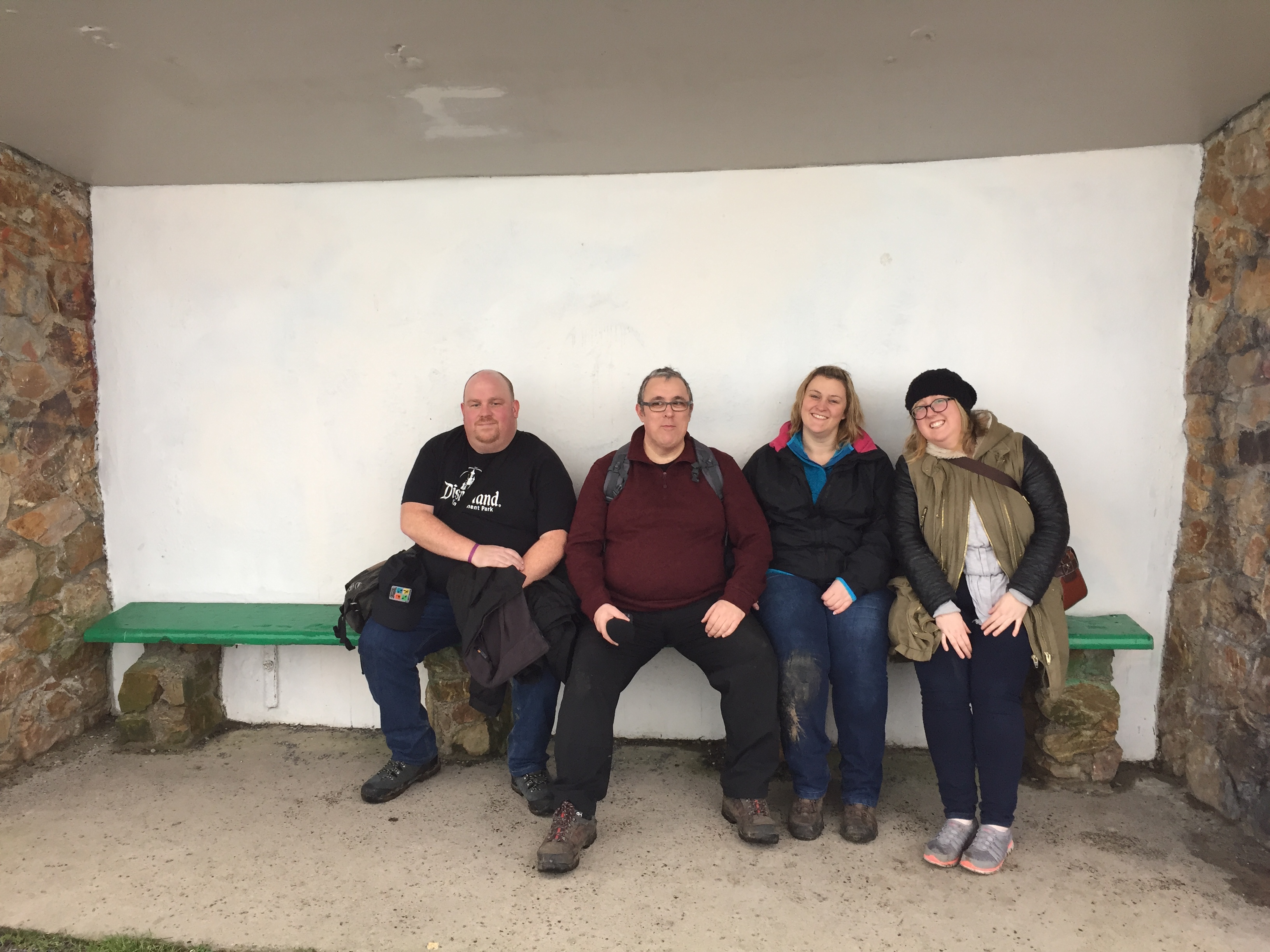 After leaving the visitors for a couple of hours to sample the beer and atmosphere in the Harbour Bar, we met again at the event location, where over 25 attendees showed up, much to my surprise. I didn’t think a simple event in a hotel lounge would attract so many, but as it happened, quite a few of them were on their way to Glendalough to stay over the night before our early rise to walk around the lakes in the dark, but more of that anon!

What was supposed to be a one hour event, lingered on for two hours until I had to leave, but some attendees still remained. I don’t like leaving an event I’m hosting until everyone has left but sometimes, needs must! 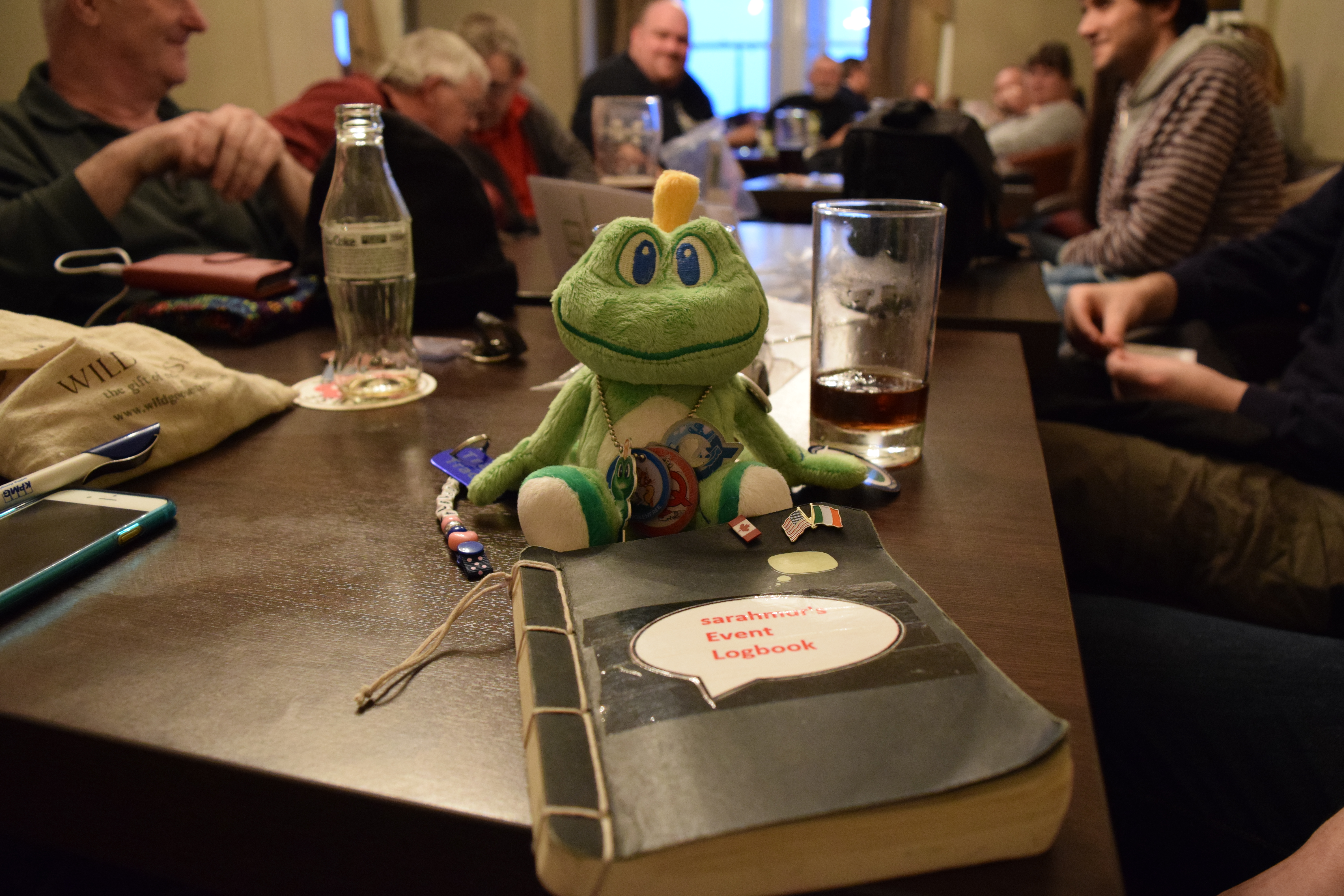 THE_Chris loves to host tortuously early morning events year-round and when I saw another instalment of Morning Insanity published, I didn’t bother putting it on my watchlist. “Not for me”, I thought. I did a search of events last week and seeing this one on the list, I clicked in and saw lots of ‘Will Attends’. “Maybe, just maybe”, I thought, “I can get out of bed that early on a weekend.” So I put a tentative ‘Will Attend’ on it and resolved to make up my mind when my alarm went off on Sunday morning at 5:30am. 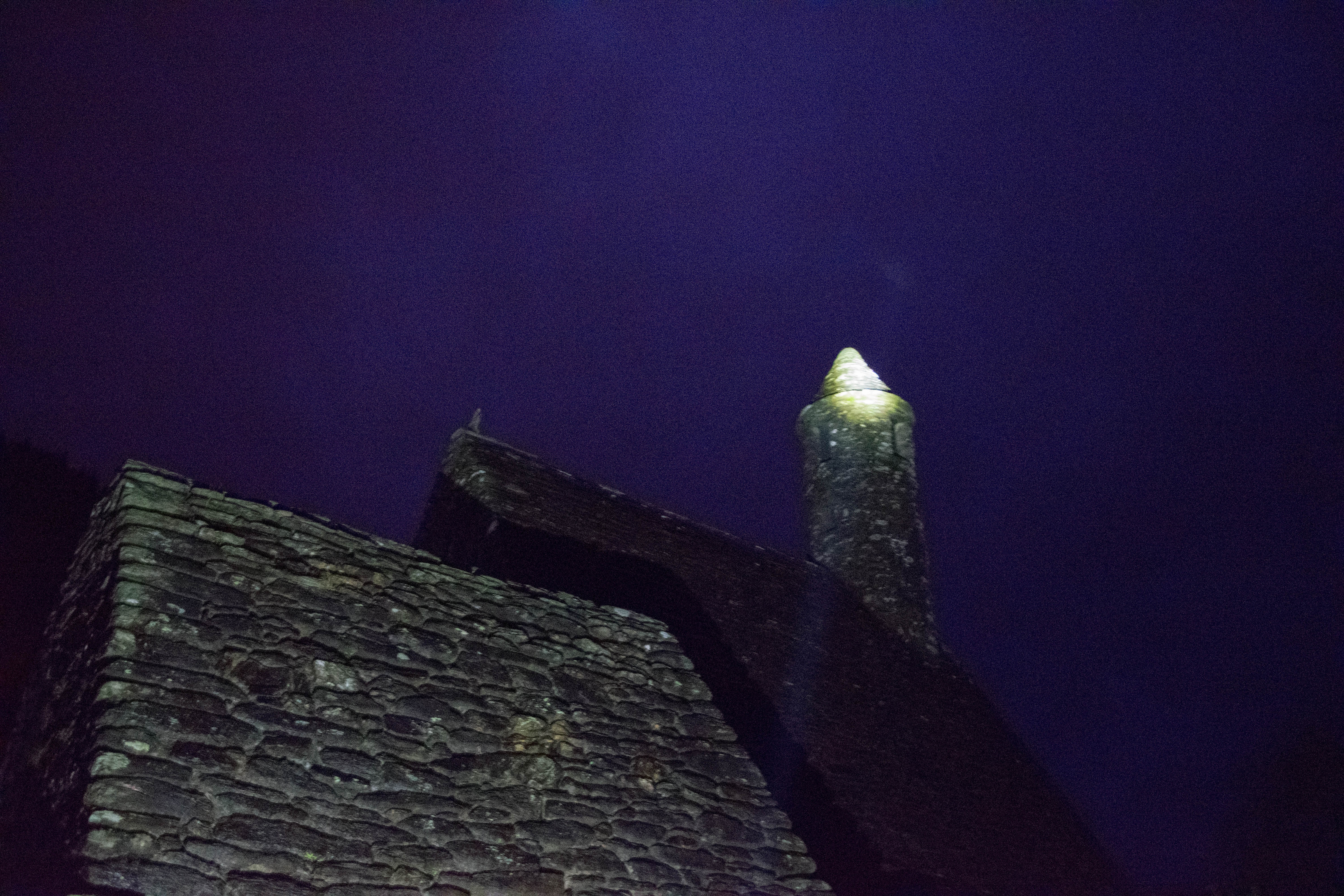 As it happened, the muggle woke me up at 5:20am and insisted I should go because I’d regret it if I didn’t. So off I went, leaving at 5:55am in the pitch dark and driving along the streetlight-less, winding roads all the way to Glendalough, spotting a few confused deer along the way.

I arrived at the parking coordinates at 6:30am (‘before sparrowfart’, as Lulybelle so eloquently put it in her log!) and saw, or rather heard, lots of geocachers gathering. Someone lucky enough to have phone reception announced there had been two new EarthCaches published along our route. A very nice surprise to add to the morning! 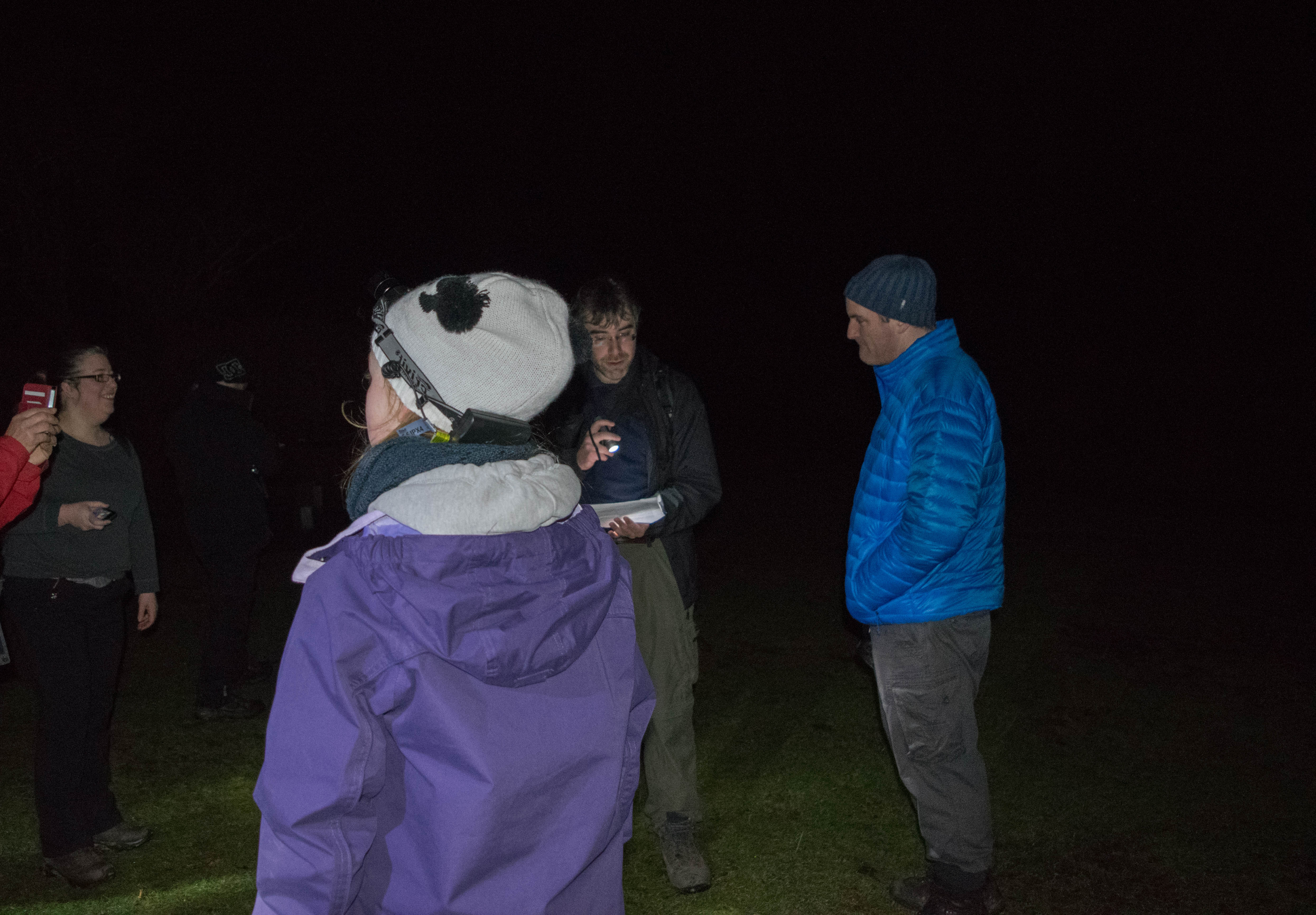 After gathering at the monastic ruins for a group photo taken by our host, we set off to the first stop on our route and the first of the newly published EarthCaches – the Lower Lake. Our event host read out the questions, as we all made sure not to fall in said lake, which was not at all visible in the complete darkness. It was a group effort, with various attendees shouting out answers. 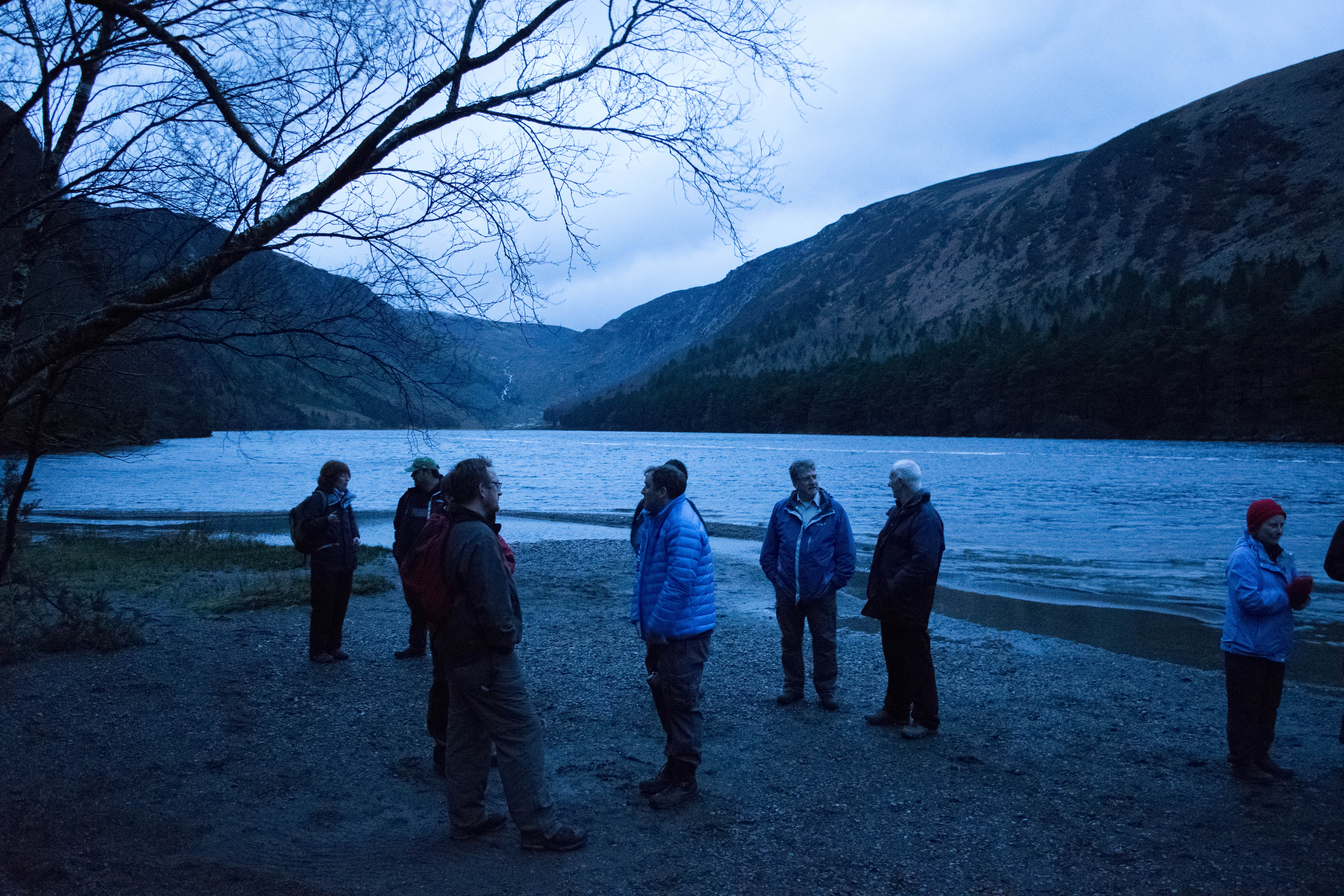 We soon reached the upper lake as the day began to break. Answers for the second EarthCache were discussed and yummy cake provided by the CO and Lulybelle was passed around. Blue skies evaded us as it was very overcast but I borrowed the CO’s tripod and had a go at getting a good shot of the lake. 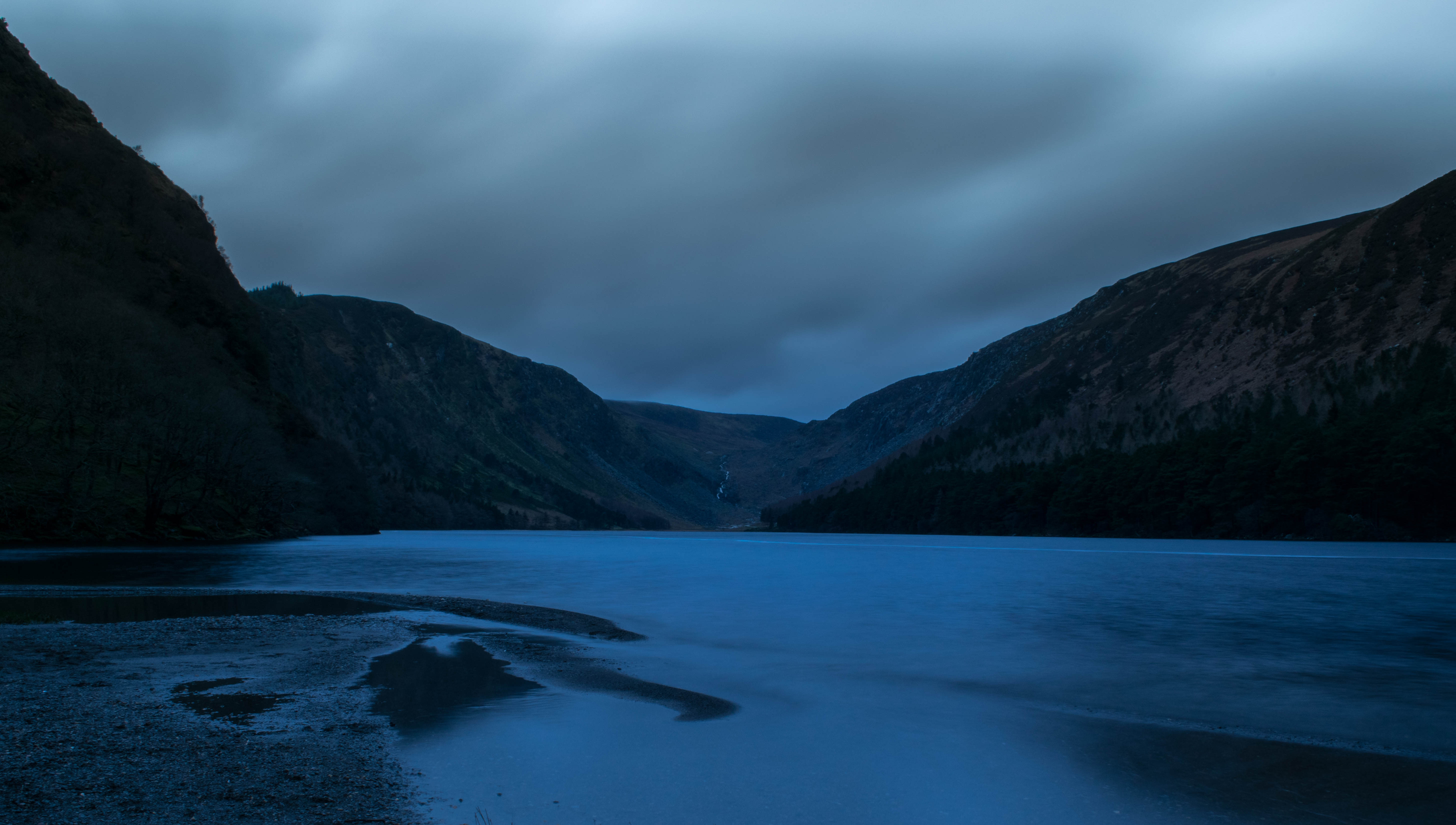 I noticed a splinter group going for a nearby cache as people started to drift off in various directions, so I decided to join them before heading home. I thought it would be an easy walk. It certainly was not. 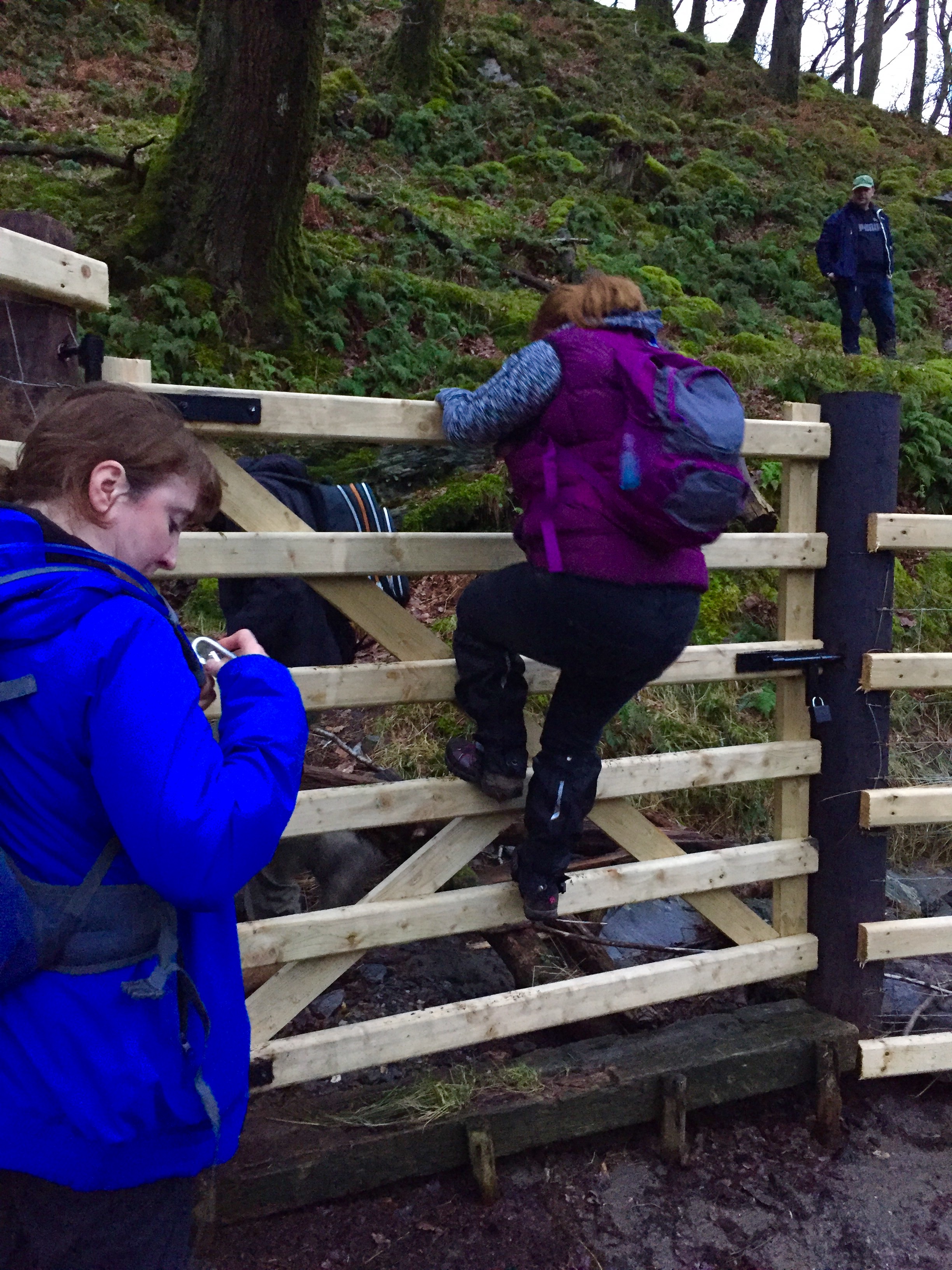 First up was the climb over the locked gate. Funny how a locked gate used to mean ‘do not enter’, now it just means ‘one more obstacle to overcome before finding the cache.’ 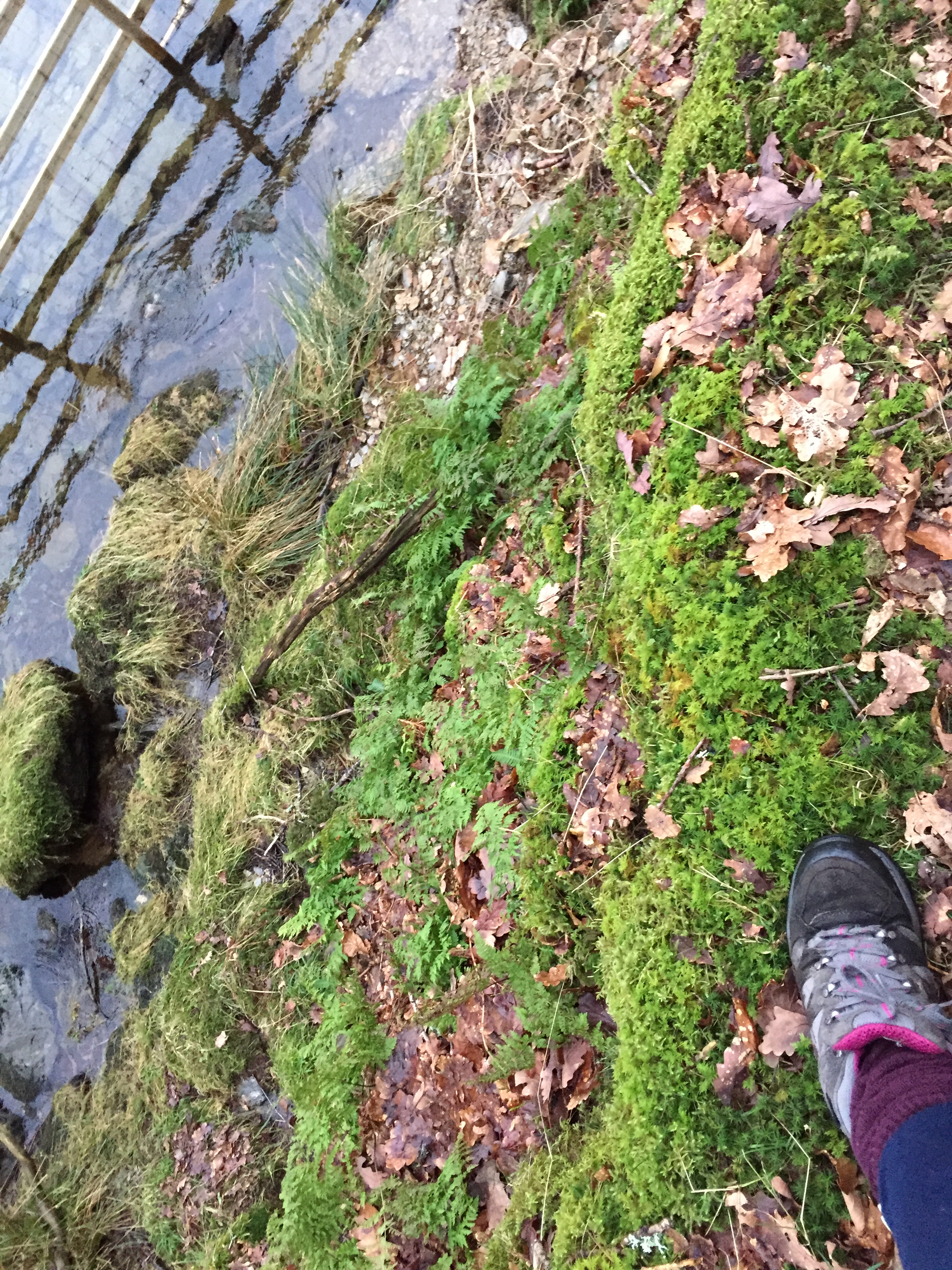 The way to the final stage was along a narrow trail with a sheer drop on one side and the recent rain had made it very wet. The most difficult part was a very slippery rock face but all managed to get up it without incident. The same could not be said for the way back but there were no injuries, thankfully. 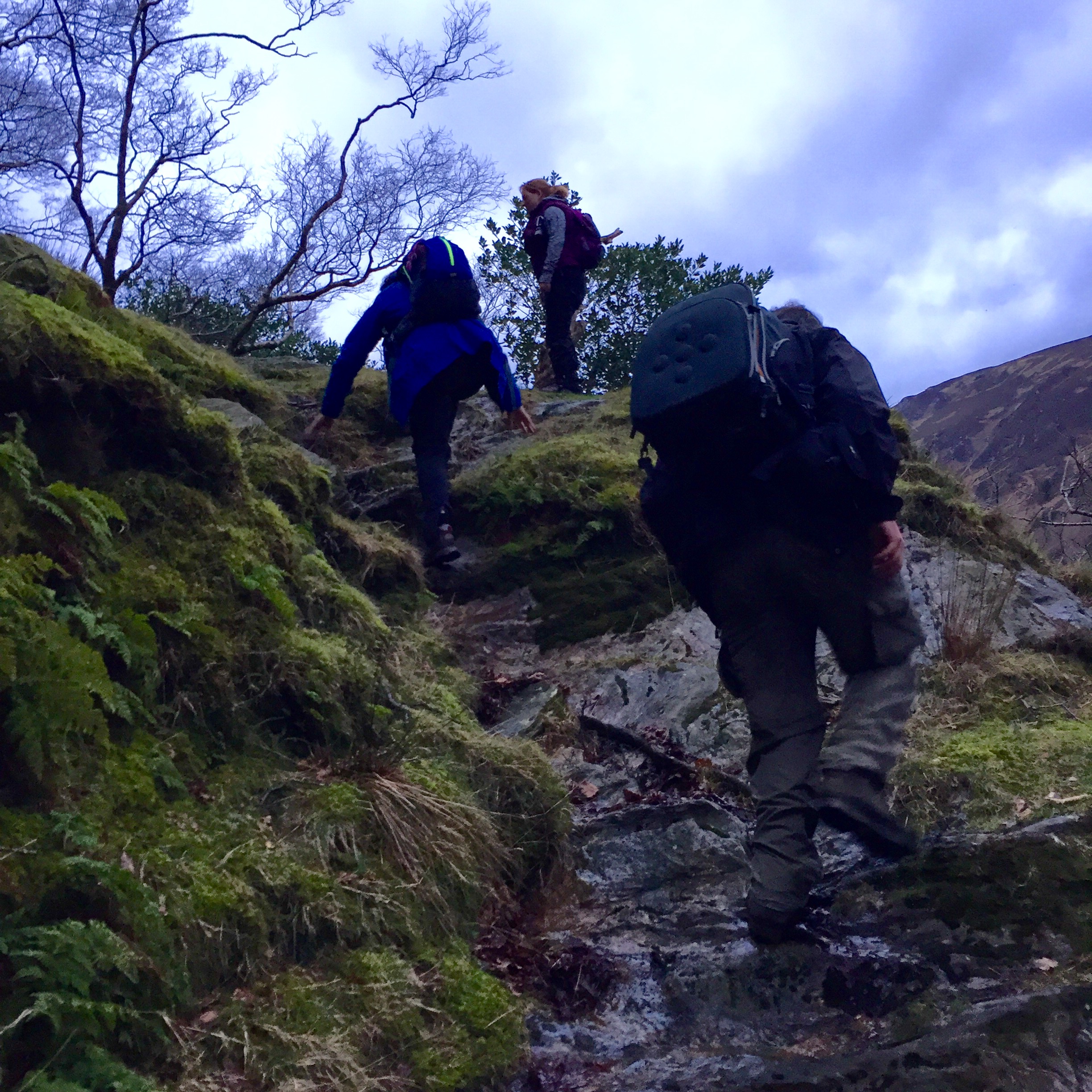 It was great fun going with the group to find the cache. I haven’t done any caching with a crowd like that in a while, and it really enhances the adventure element. On the way back to terra firma, we enjoyed some great views of the upper lake.

Some of the group decided to go for more caching madness up on Spink so four of us headed back towards the car park. Glendalough is really beautiful – I need to explore it more and there are still plenty of caches I need to find in the area. 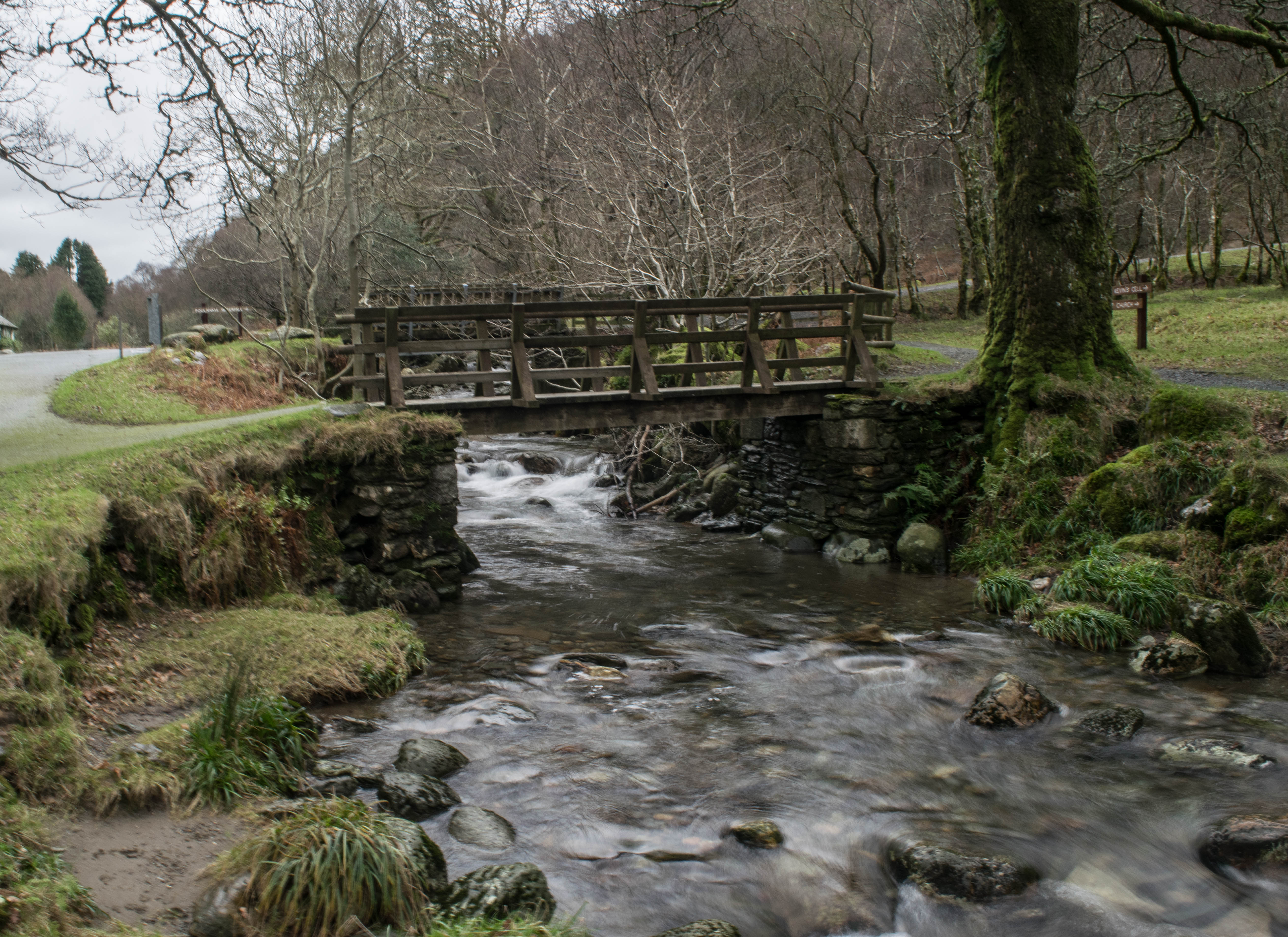 On the way back, THE_Chris told me about a plan to attend the Brugse Beer Mega in Belgium in April. Before I knew it, I was seriously considering taking the last spot available in the hire car. Long story short, I have booked my €50 return flight to Brussels for a two day rampage. Looking forward to it already! 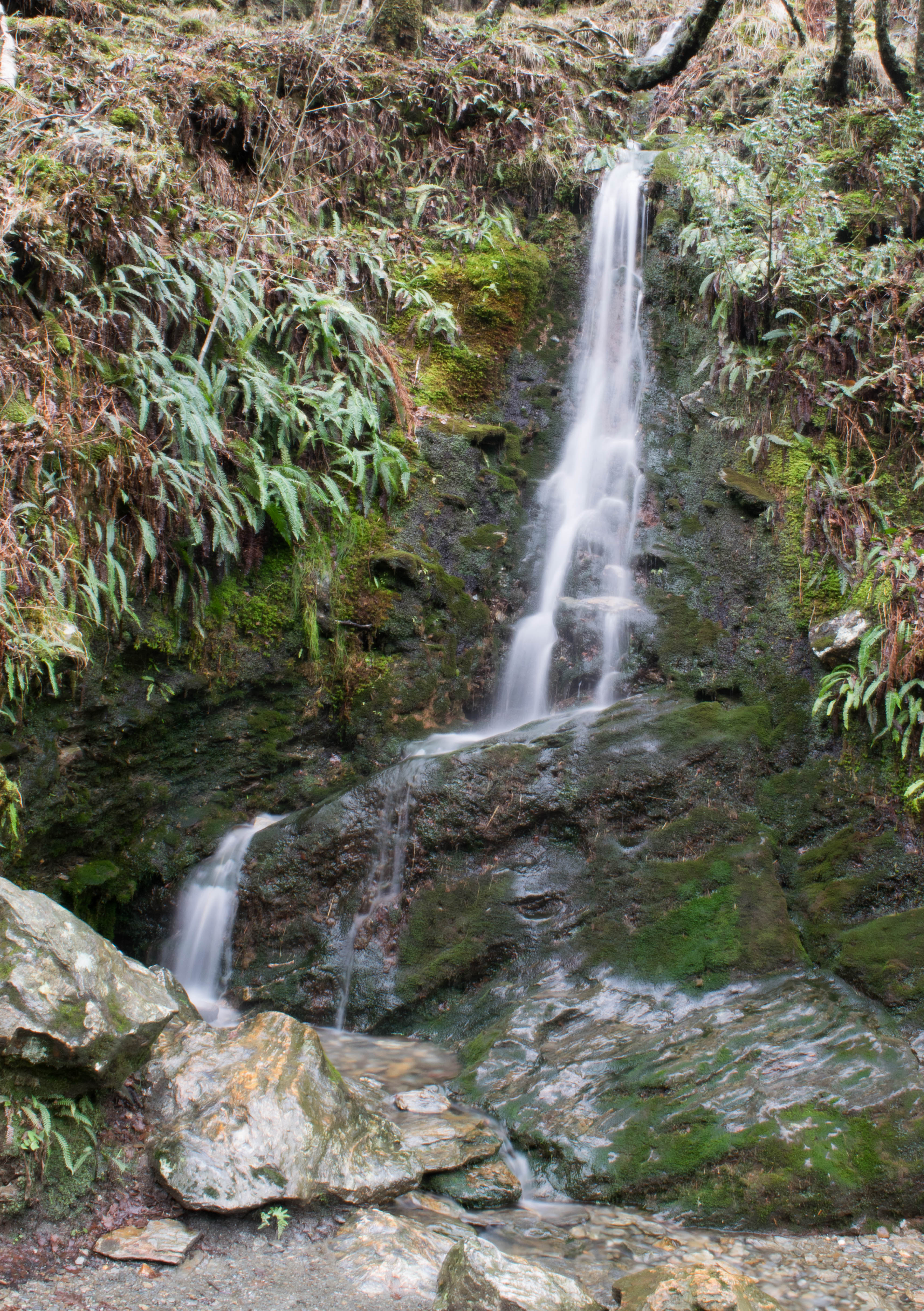 There was just time for one more cache, so we quickly found Glendalough (GC5TX21) before I headed home. 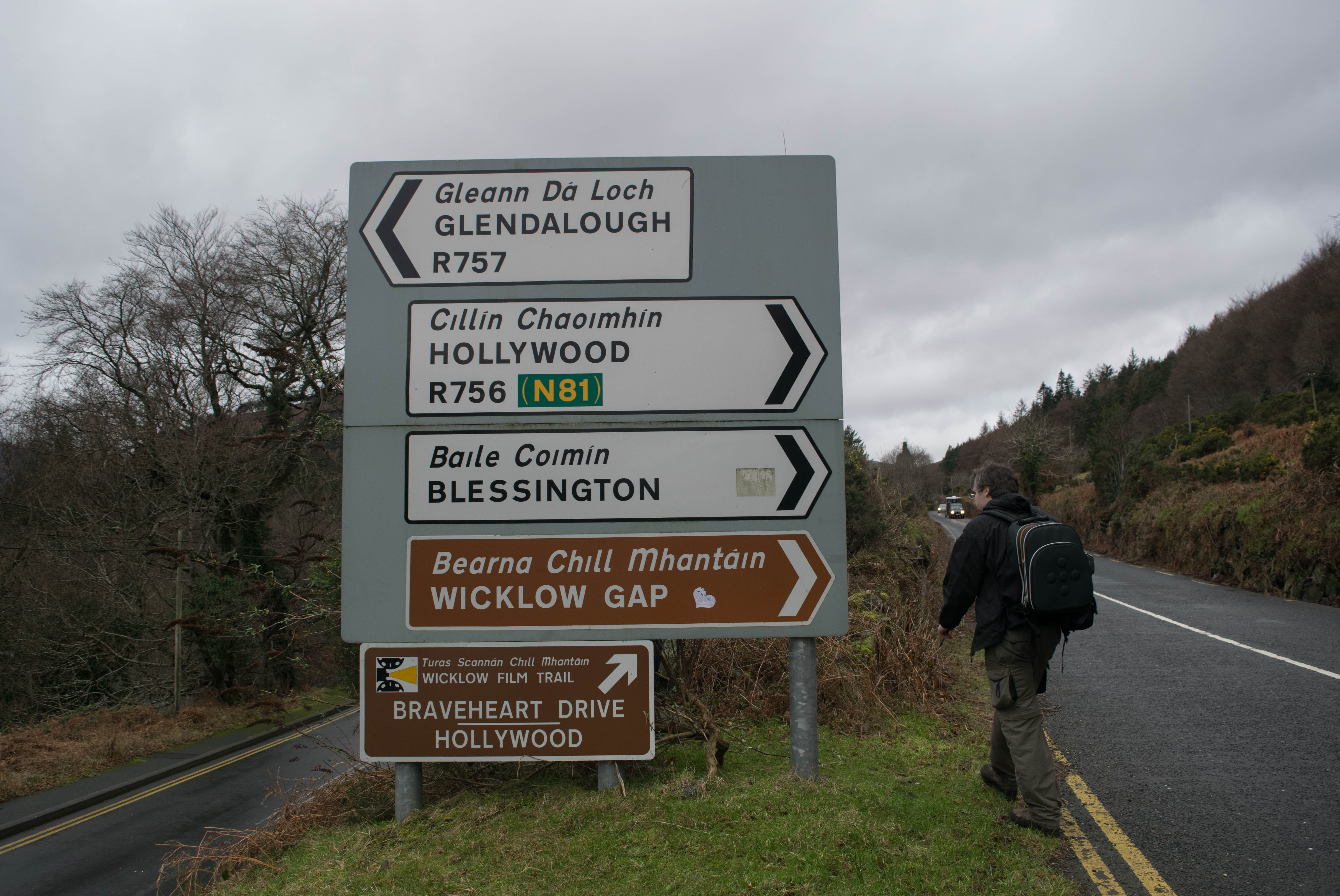 A fantastic weekend of geocaching madness, with a great group of geocachers equally as insane as me, by all accounts. What’s the earliest you’ve ever woken up to attend a geocaching event? Let me know in the comments.