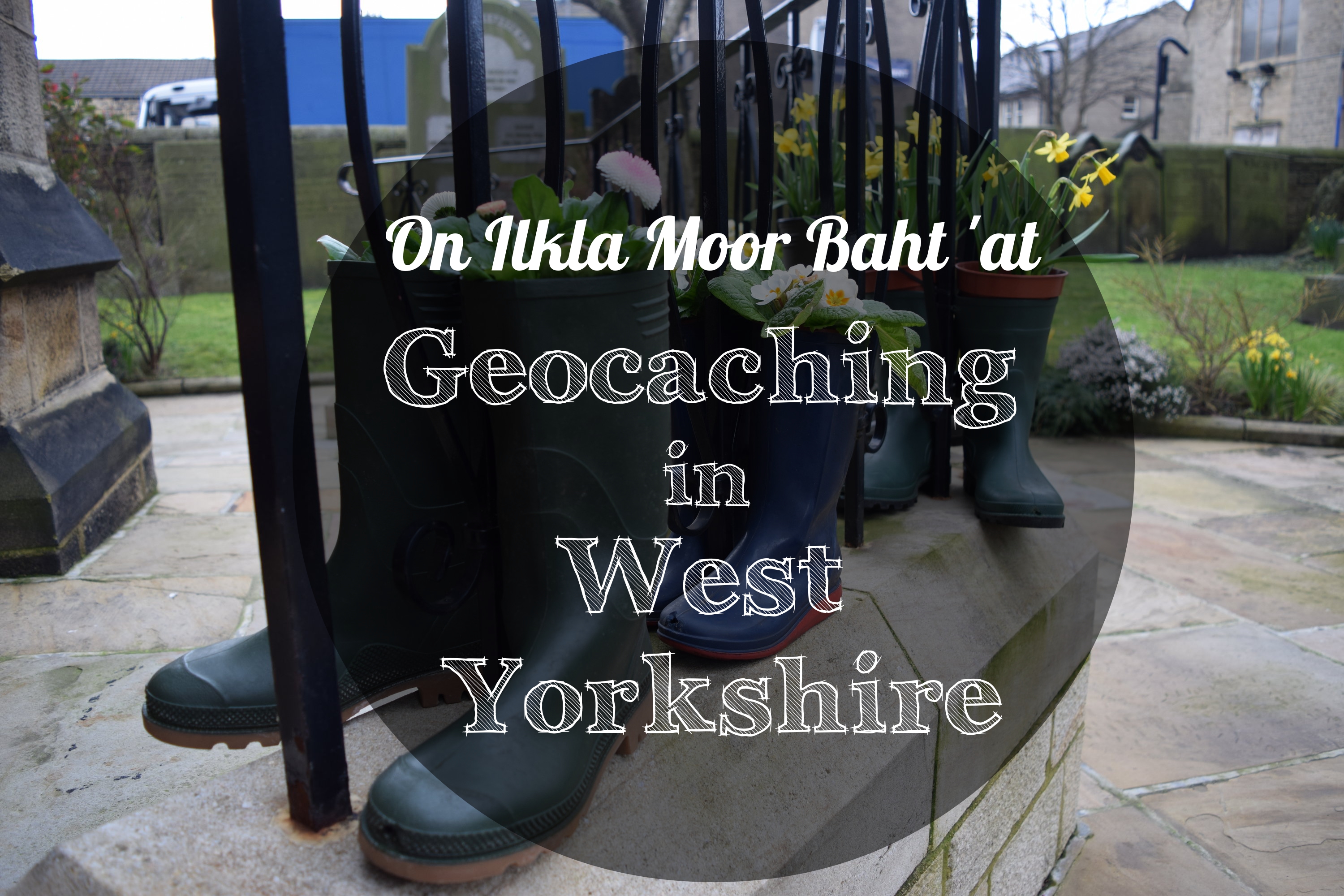 It’s been a tradition for quite a few years that I bring The_Mother on some sort of trip for her Christmas present. This year, I had the idea of booking an Emmerdale location tour. For those who don’t know, Emmerdale is a British soap opera set in the Yorkshire Dales and has been running since 1972. The_Mother has been watching it since then – that’s dedication.

Of course, the tour itself was only 4 hours long so we had the whole rest of the weekend to geocache – HAPPY DAYS :). We arrived late on Friday evening, so the caching didn’t commence until Saturday morning.

We awoke to an overcast but dry day – perfect conditions for some serious geocaching. We stayed at the Doubletree by Hilton, located at Granary Wharf, directly behind Leeds Train Station. The location is perfect and I got a really good deal at booking.com (50% off!!).

The first task of the day was to find the location of the event I was hosting so we didn’t get lost and end up arriving late.  GZ for the event was underneath the Equus Altus sculpture in the Trinity Centre – a location I had nabbed from a previous event hosted by GoldCircle and THE_Chris in 2014. 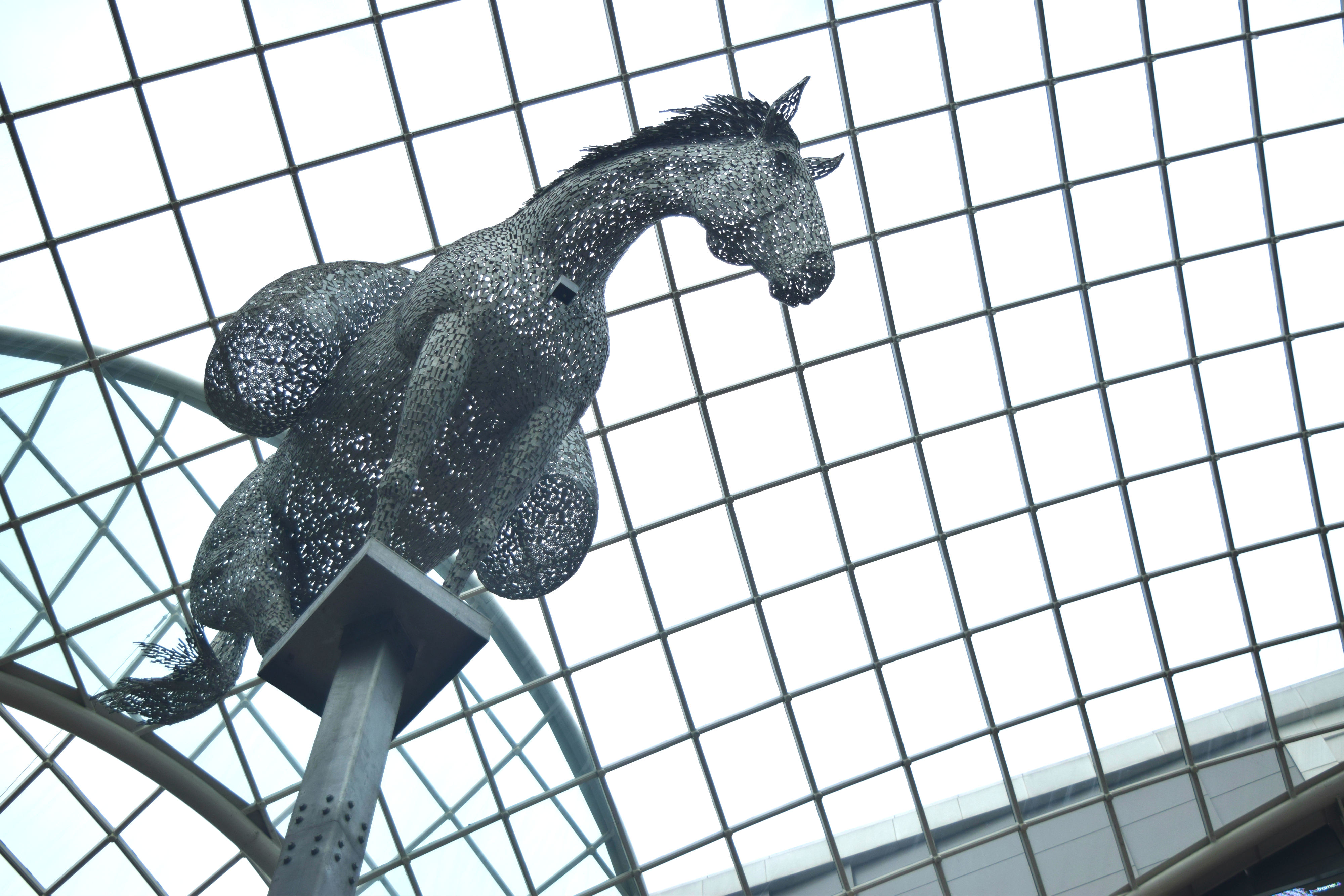 Since we were still early, we went and found a couple of caches before heading back at 10:40am to be nice and early for the 11am event. Soon one person turned up and before I knew it, a crowd had gathered underneath the horse, much to the bemusement of shoppers. 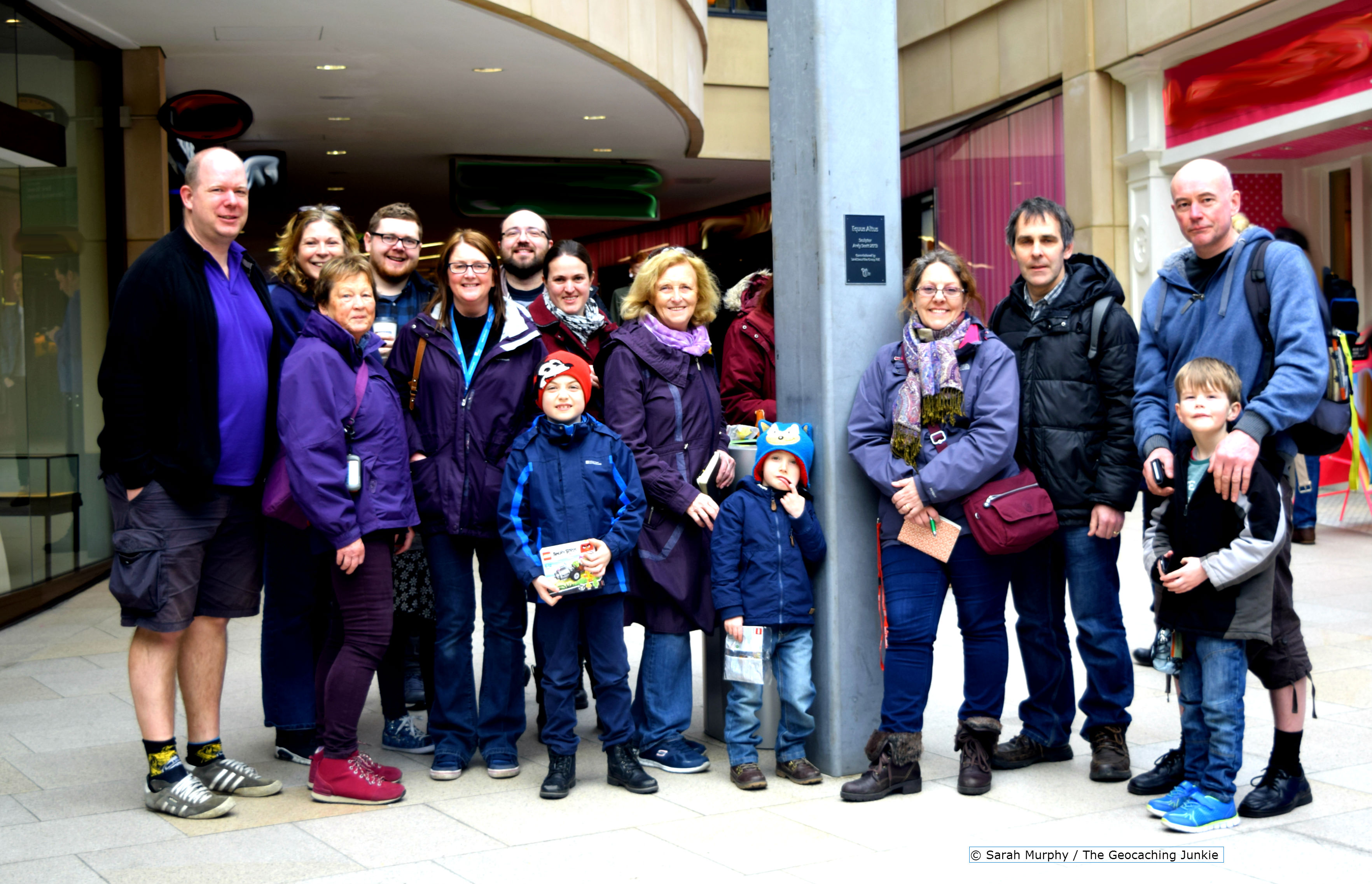 A lovely group of cachers chatted about all things geocaching and much too soon it was time to go. We still had time to kill before our tour and we found ourselves at the train station, where our bus would be departing from. The nearest cache was a puzzle: Sidetracked Leeds – City Square.

Now, I had a plan formed to try and get 6 cache types in a day: traditional, multi, puzzle, event, webcam and earthcache. There aren’t many puzzle caches in Leeds city centre and even fewer that I could figure out. I eventually solved – with help from tsiolkovsky – Where’s the Key? and I planned on going for that one, even though it was a bit of a walk from the city centre. I had looked at the Sidetracked cache, as it was a field puzzle, but the comments and the difficulty rating put me right off. My reservations were further cemented when it was mentioned at the event and I was told it was ‘quite difficult’. So when The_Mother suggested we give it a go, I outright said ‘no, it’s too hard.’ But we had time to kill so she said we might as well try. And what do you know? We had the cache in our hands within 10 minutes! A very satisfying cache to find indeed, and in a lovely location to boot. 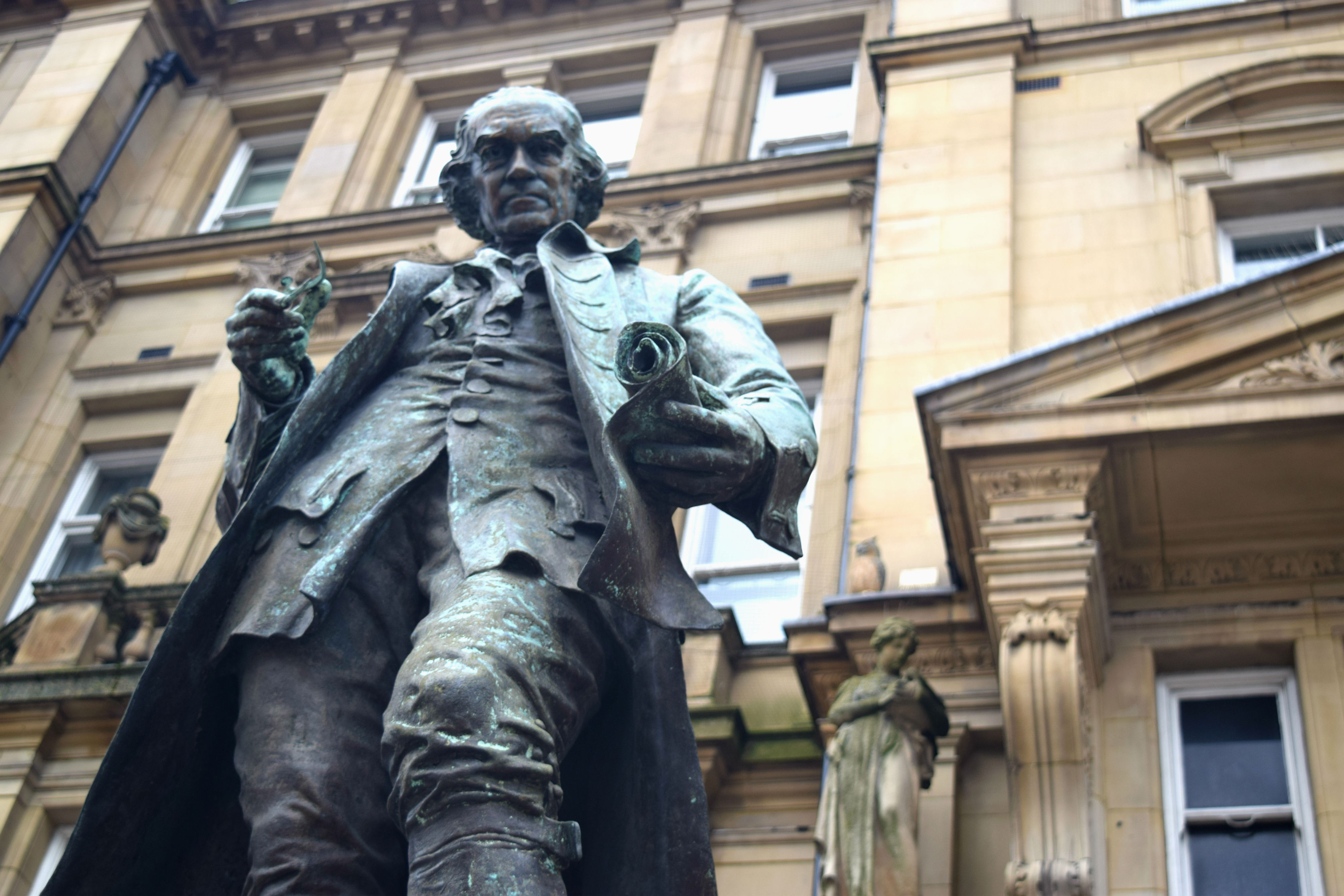 After that, it was on to the Emmerdale Tour of Classic Locations by Brit Movie Tours. We boarded the coach, which left promptly at 1pm from the train station and headed for the dales. Our tour guide, Bev, informed us that dales are basically what they call valleys and hills round these parts. There is really some lovely countryside in Yorkshire and I was glad we got out of the city to see it!

The tour itself was only okay. The show is now shot largely in a purpose-built village on private land but some outdoor scenes are shot at working farms and people’s houses. I don’t watch Emmerdale, so it was difficult to recognise some of the places. There were a few that I definitely did recognise. You can’t grow up in a house with an avid Emmerdale watcher and not recognise Home Farm or the Woolpack!

The tour gave us two 45 minute stops in Otley and Esholt, and of course, with that free time, we obviously went geocaching! In Otley, we found two geocaches. The first was  Historic Wharfdale – The Grammer School, right beside a statue of Thomas Chippendale, the famous furniture designer, who was born in Otley.

We had only been looking for the cache for less than two minutes when a man emerged from the building and asked ‘are you geocachers?’ After we confirmed, he promptly led us to the cache!

When we got to Esholt, we stocked up on our Emmerdale souvenirs in the post office, then headed to find ‘t Woolpack,  a very nice hidden-in-plain-sight cache. Our last stop in Esholt was for an alcoholic beverage in the famous pub itself. Well, it would be rude not to! 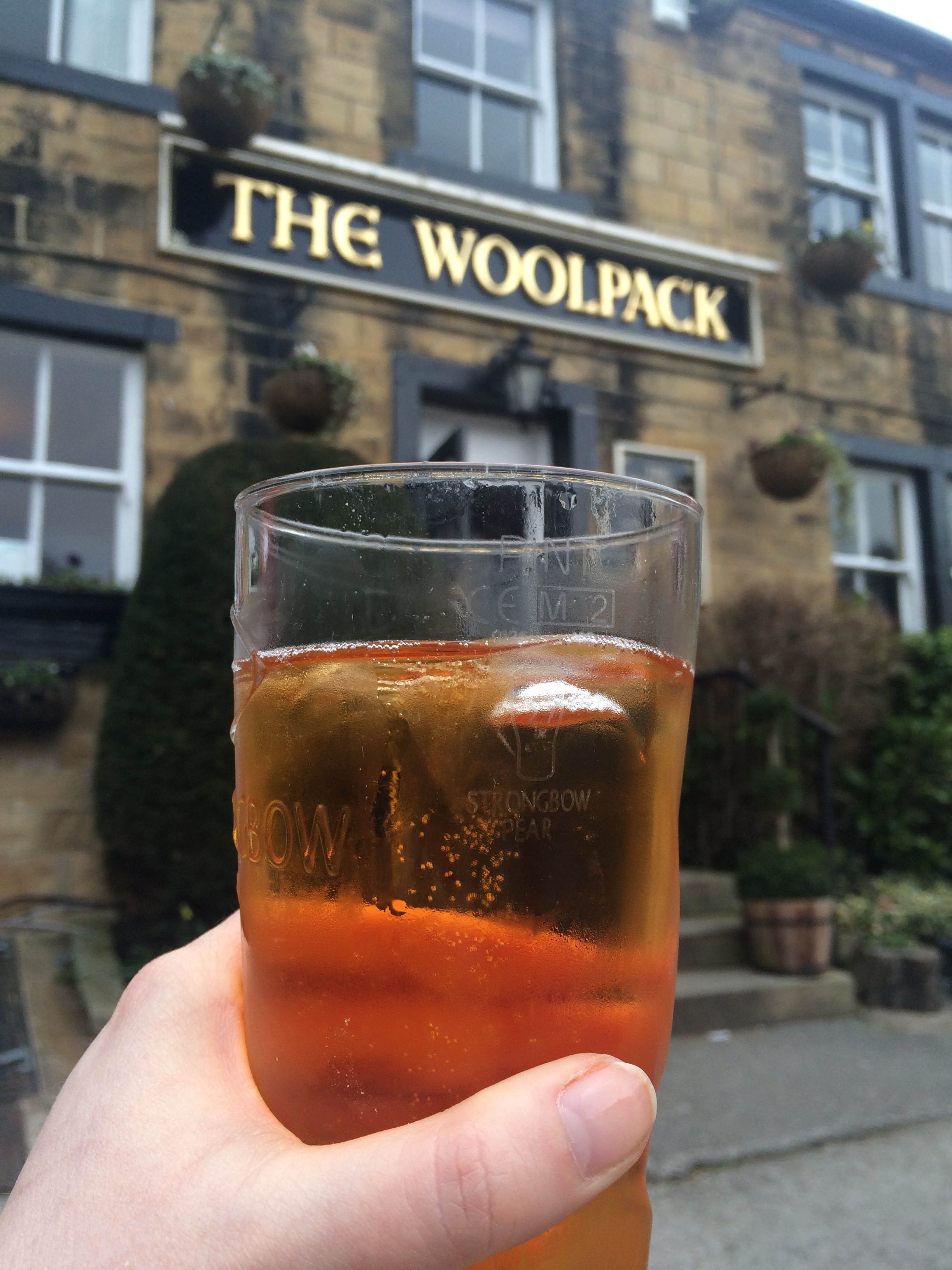 Once we got back to the city, the rest of the day was spent collecting the remaining three cache types we needed: the Leeds Web-Cam Cache – the oldest surviving webcam cache in the world, from October 2001; a nice multi cache in the form of Church Micro 4471…Leeds – St Annes Cathedral and the only earthcache in the city, Yorkshire Playhouse Earthcache, which we did in the dark! 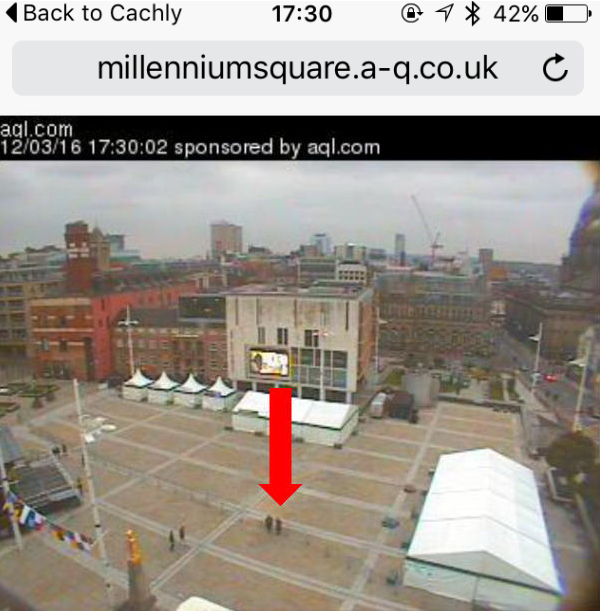 On Sunday, we didn’t fly back until the evening so we had the day to do as we pleased. When we were in Millennium Square the previous day at the webcam, we saw they were setting up for a St Patrick’s celebration the following day (as you can see from the tents in the picture!). Since neither of us had seen a St Patrick’s Parade outside of Ireland, we decided we had to go. As it happened, the sun was shining and the parade was great craic!

We had a drink afterwards at Millennium Square and enjoyed the music, before setting off on a quest to find more caches! It was the perfect day for geocaching and we covered almost 10 miles walking in the sunshine.

My favourite cache of the day was Foundry Square, a traditional that had us scratching our heads for a while until we eventually found it. The real beauty here was the location. Check out the cool bicycle tree!

A weekend thoroughly enjoyed consisting of 21 finds, and only one DNF. I really loved Leeds: a great, clean city, with friendly people and only a short hop out to beautiful countryside. What more could you want? 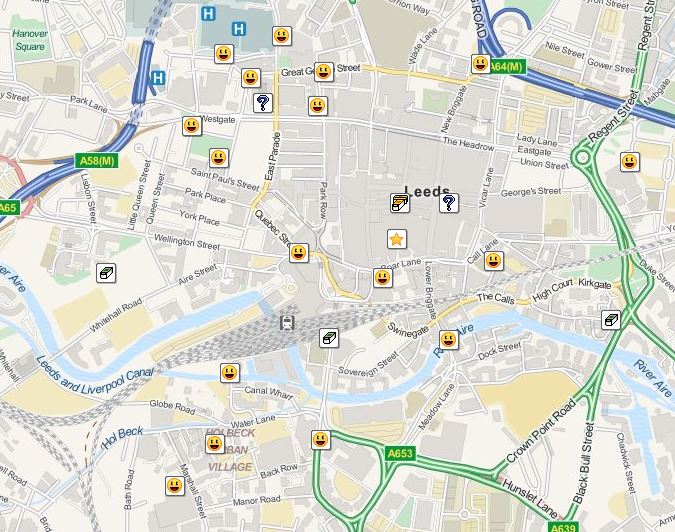 A note on the post title: As we were on our tour, we got a glimpse of Ilkley Moor and our guide informed us of a folk song in the Yorkshire dialect called “On Ilkla Moor Baht ‘at“. It stuck with me and will now be my go-to phrase in Yorkshire dialect! Well, that and ‘ay up me duck!’ (which njcbailey has claimed for Derbyshire – oh well, what do I know? I’m just a foreigner in these lands ;)!)