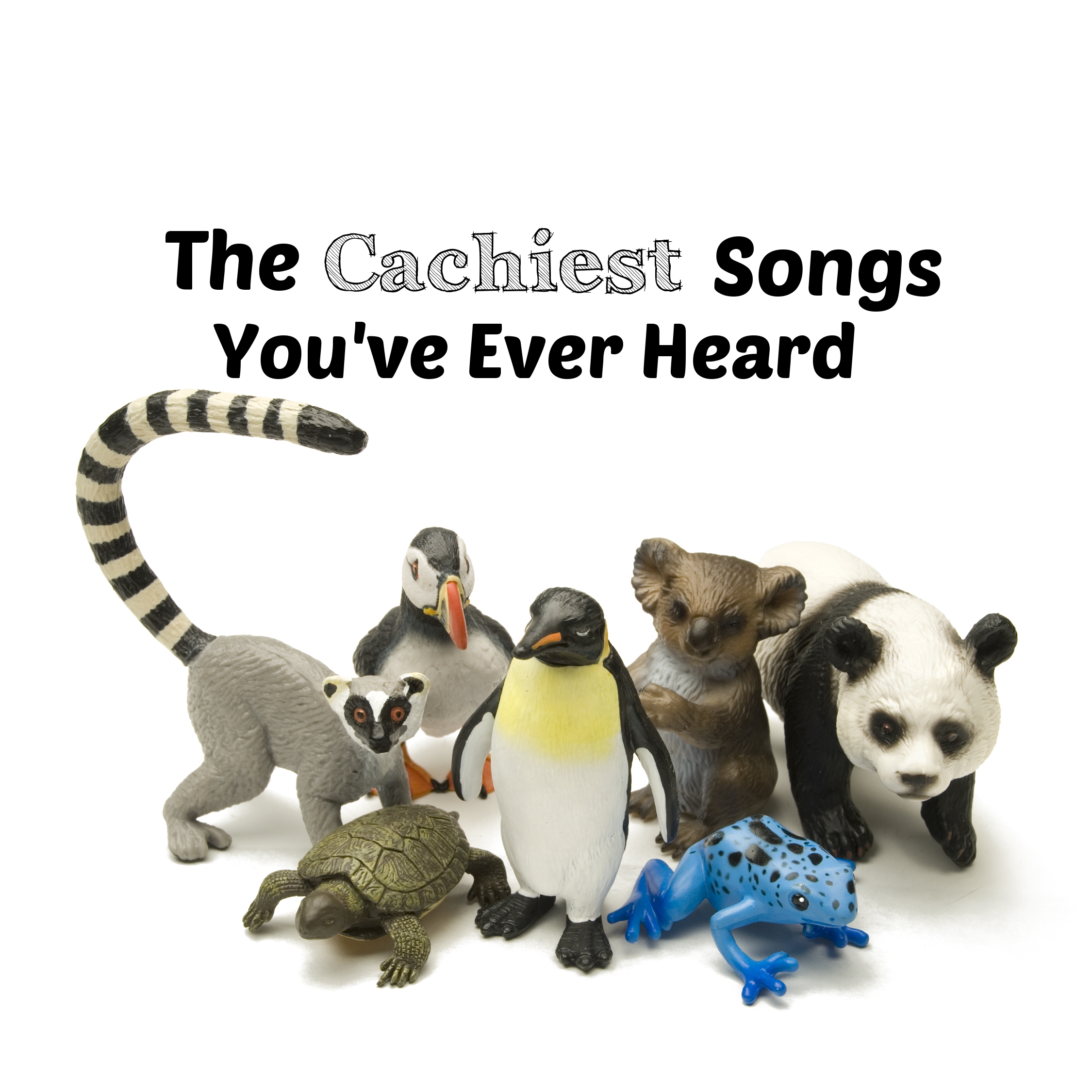 Some talents and skills go hand-in-hand with geocaching, such as being a kayaking enthusiast, or a rock climber. Other skills, like being a champion competitive dog groomer, may not so obviously be combined with geocaching (please do correct me if I’m wrong, because I really want to see that!). One talent that seems unlikely to be partnered with geocaching is musical ability, but it turns out, it might just be a match made in heaven!

When listening to the Cache and Release podcast in May, I heard the The Travel Bugs’ latest song. “What’s this,” I thought, “geocaching music?!” I was undoubtedly sceptical but I soon found myself singing along with ‘The Worst Cacher’.

Before you read any further, have a listen to one of the band’s hits, ‘To Whom It May Concern’:

Sounds like a talented bunch of people, doesn’t it? What if I told you The Travel Bugs is actually just one guy, who does it all from his home studio – playing instruments, singing, writing lyrics and recording! I was astounded and very impressed. I was also delighted that Steve Weeks, the band’s ‘founder’, agreed to talk to me about The Travel Bugs.

Steve, from Colorado, started geocaching in 2002 but it wasn’t until years later that he decided to combine his love of music with caching. As a professional kids music performer who travels all over the US and Canada, Steve has won a variety of songwriting awards and there’s no doubt he knows how to write a catchy tune. He has been in to music since he was young, and succeeded in turning it in to a career when he began writing songs for his own kids.

The Travel Bugs consists of seven band members, born out of Steve’s imagination. When he first started writing geocaching songs, Steve knew straight away that he wanted to have a ‘band’ to front the music. Each band member was born on a different continent and has an entire back story explaining how they came to be in the geo-musical septet. 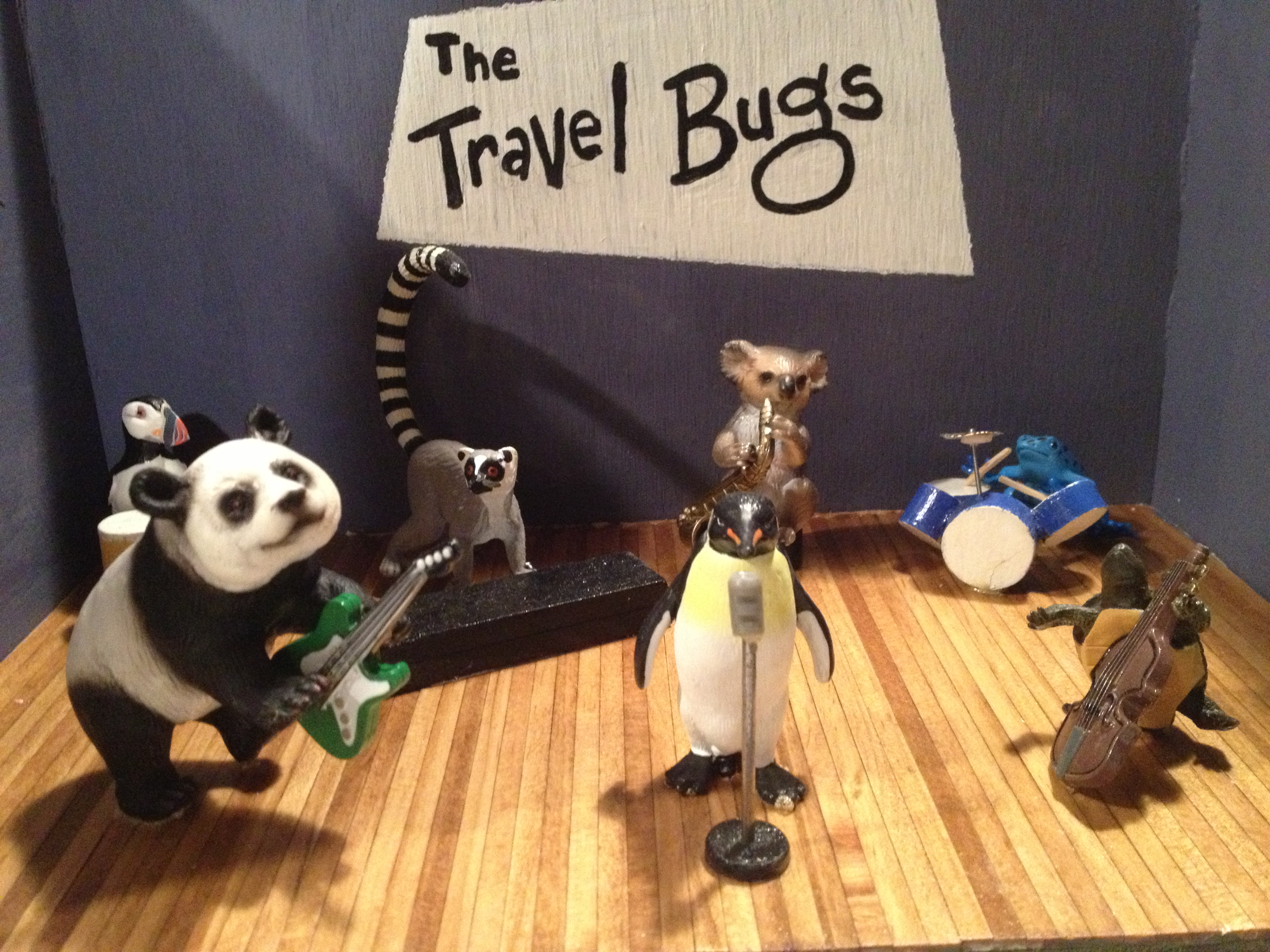 Marvin the Antarctic penguin is the band’s lead singer and also plays the harmonica. Angus is the grumpy Australian koala who joined the band on their Australian tour as their horn player. Arturo the frog is from South America and plays drums. Lee Muhr the (you guessed it!) lemur, is representing for his continent of Africa on keyboards. Ziggy the panda from Asia is actually a muggle but enjoys playing guitar with the group. Shelly is the group’s North American turtle and plays bass. Merryweather the puffin originates from the Outer Hebrides and plays percussion representing his continent of Europe.

Each band member has their own real travel bug travelling somewhere in the world. Steve tells me that at one point, five of the seven TBs were actually on their ‘home’ continents.

If you were lucky enough to be at the West Bend Mega in Wisconsin in 2012, you may have enjoyed The Travel Bugs’ only gig to date.

Three years after conceiving the idea for a geocaching music CD, the plan became a reality with the release of ‘Found It!’. Steve wrote, performed and produced the entire CD himself, only getting help from his son with the intro and from some muggles to contribute their voices to saying ‘found it!’ in numerous different languages:

This turned out to be a really fun project.  I had some Austrian friends who did the German version, but for all the other languages, I had to reach out to the local community.  I called a local French restaurant and got the chef to do the French version, and for Russian, I found a lady who ran a Russian spa.  When I was explaining Geocaching to her, she was really interested.  We got on her laptop and discovered there was a cache right outside the front door of her spa!  She couldn’t believe it.

Steve travels all over the US performing his hit kindie rock songs and has had the opportunity to find caches all over, and of course, to gain inspiration for his songs from his caching adventures. He finds that people most like the songs that have “a story-line based around geocaching”, such as ‘To Whom It May Concern’, the story of Mug L. Guy, concerned about the impending zombie alien bug invasion (which is really just geocachers looking for a cache just past his property line).

Inspired by Steve’s catchy tunes, geocachers all over the world have created caches based on The Travel Bugs‘ songs, like this mystery cache, Mr. Mug. L. Guy (GC45RBW) hidden in Lisbon, Portugal.

If you’ve been looking for a playlist for your next geocaching road trip, then look no further than the music of The Travel Bugs! You can buy the CD ‘Found It!’ here, or download songs individually at iTunes.

Have you found a way to combine one of your talents with geocaching? Let me know in the comments!

A huge THANK YOU to Steve Weeks for sharing his story and photos with me!