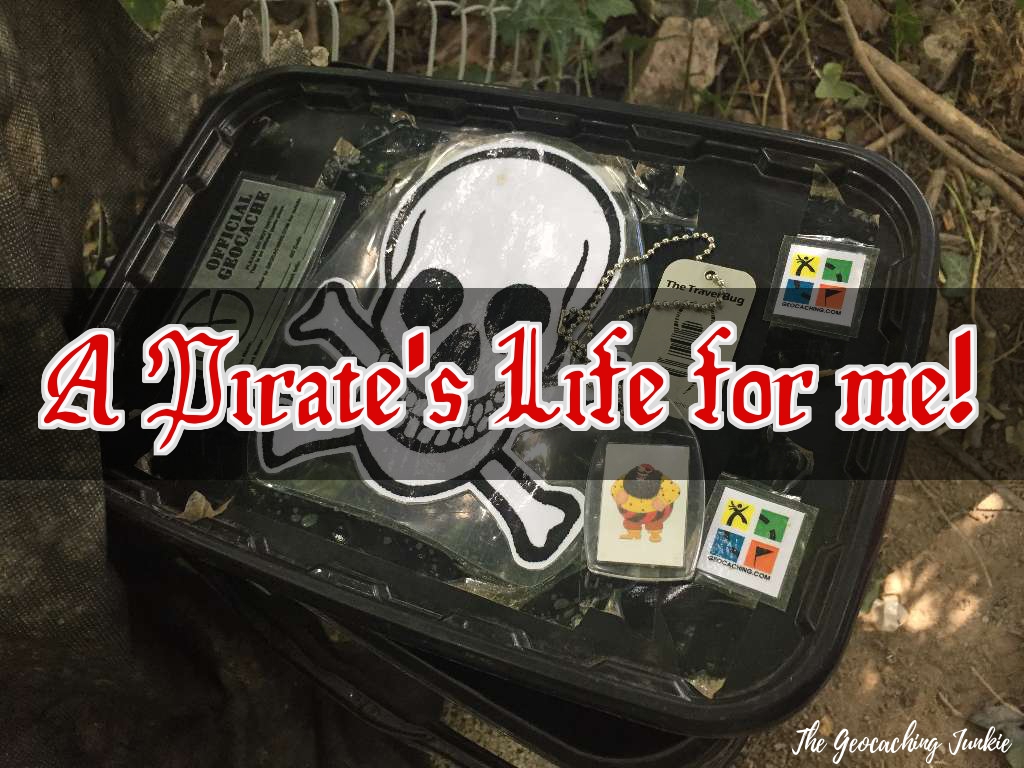 At the start of this year, I found out that Piratemania 9 and the UK Mega were being held not too far about within a week of each other. After much deliberating, a treaty was agreed with the muggle, that we would spend over a week of our holiday time in England and Wales, mainly geocaching, with a little bit of visiting his family time in between too.

Piratemania, the first of the week’s mega events, organically grew from an annual camping event to achieve mega status in 2011. Now in its ninth year, the event is touted as the mega  that “gathers together Pirates from all over the globe for one weekend of fun.“

Will Turner: We’re going to steal a ship? That ship?

Well, we didn’t exactly steal or even commandeer a ship, we just booked our tickets and took the geomobile on the ferry over the Irish Sea. At least we went by ship rather than plane, to add to the pirate theme of the coming weekend! 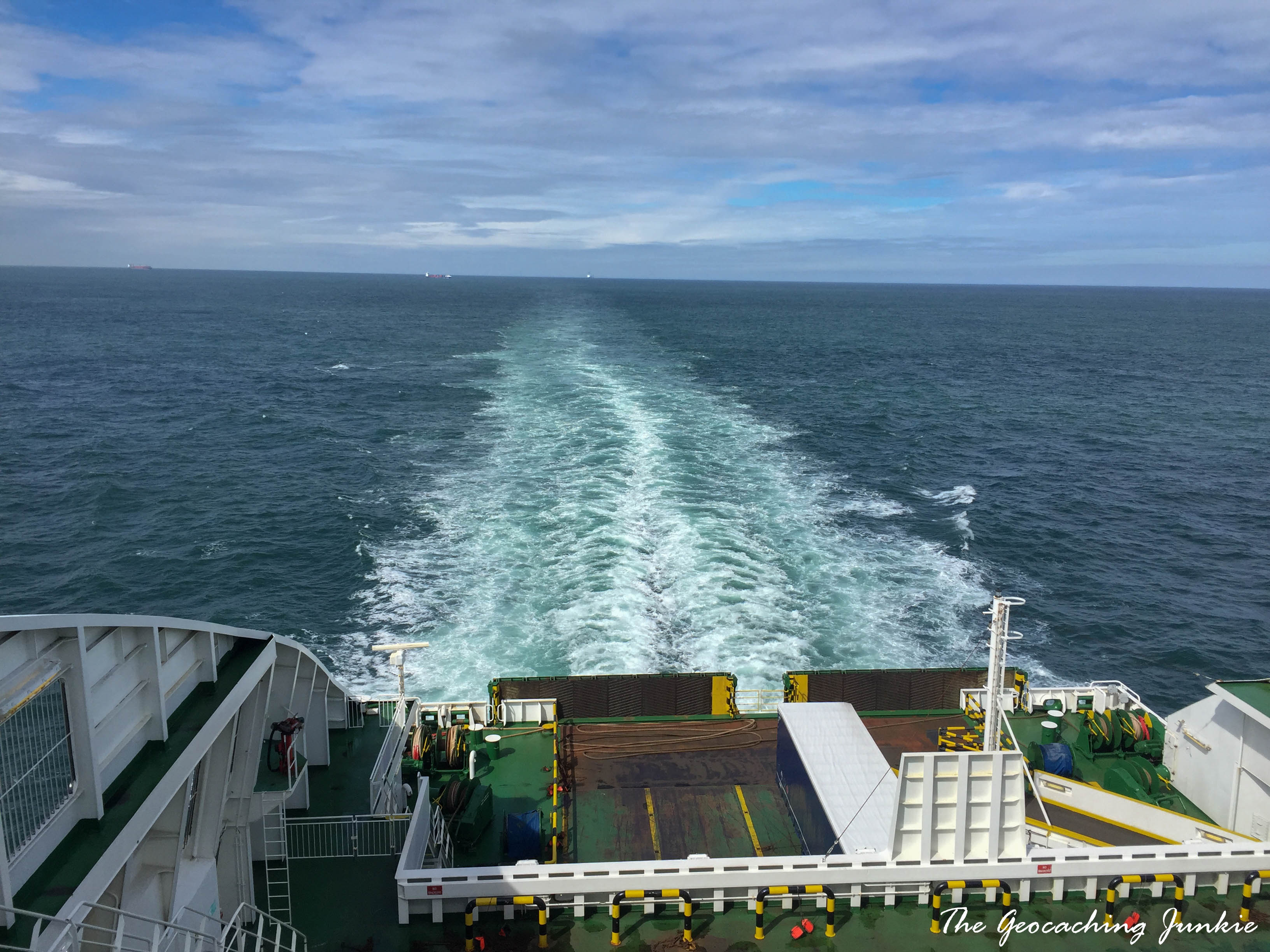 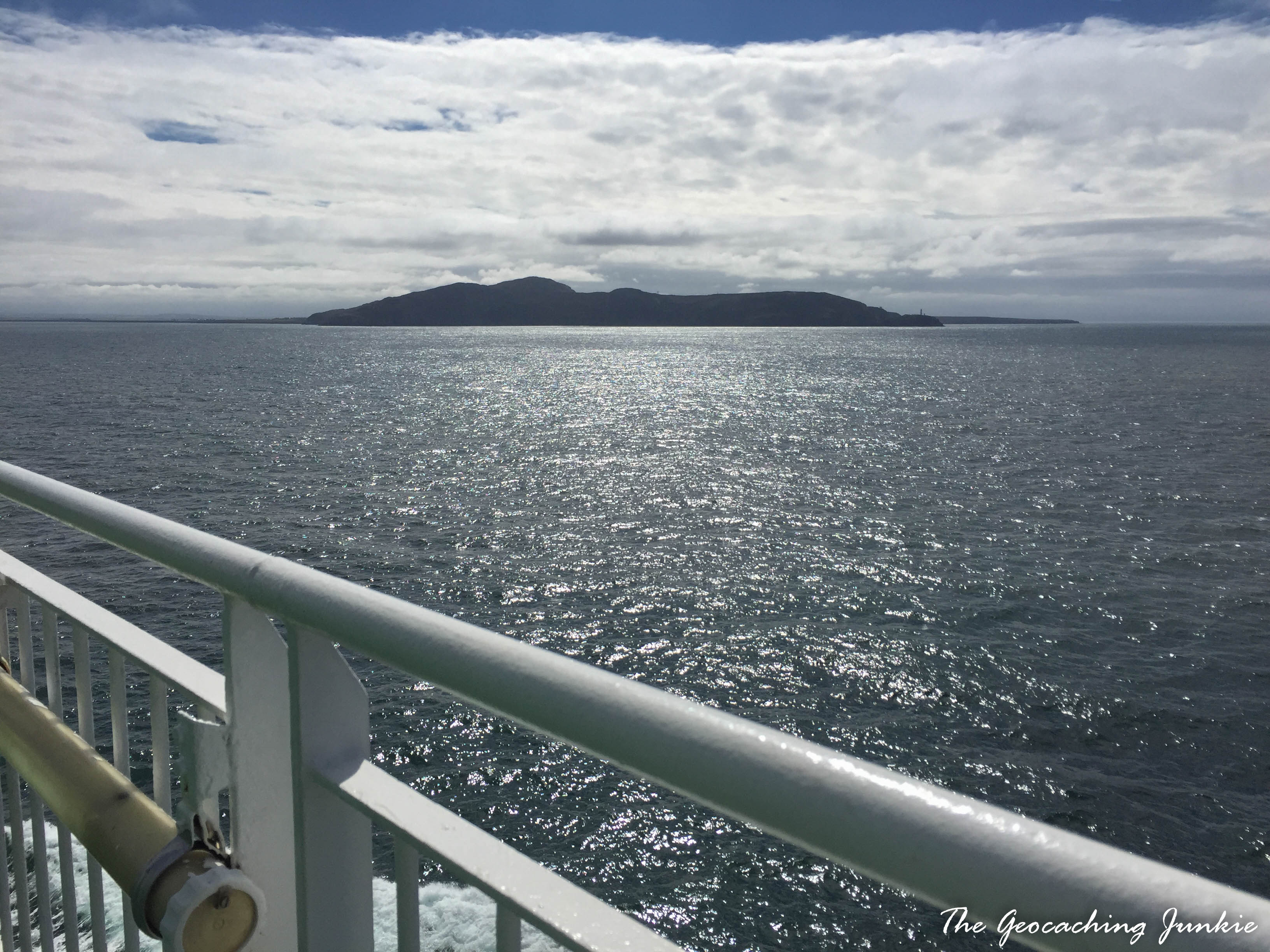 After the uneventful crossing from Dublin to Holyhead, we did a few caches en route to the small market town of Wem where we were staying, north of Shrewsbury, the event location for the mega. We opted not to camp, as I didn’t want to shiver me timbers for a whole week! After checking in, we went straight to the mega campsite for the Piratemania BBQ Event.

The sheer number and variety of flags at the campsite was very impressive, with an obvious leaning towards the skull and crossbones, as is befitting to a pirate event! We weren’t camping though and we needed some grub, so we bid farewell and went to eat some local fayre. 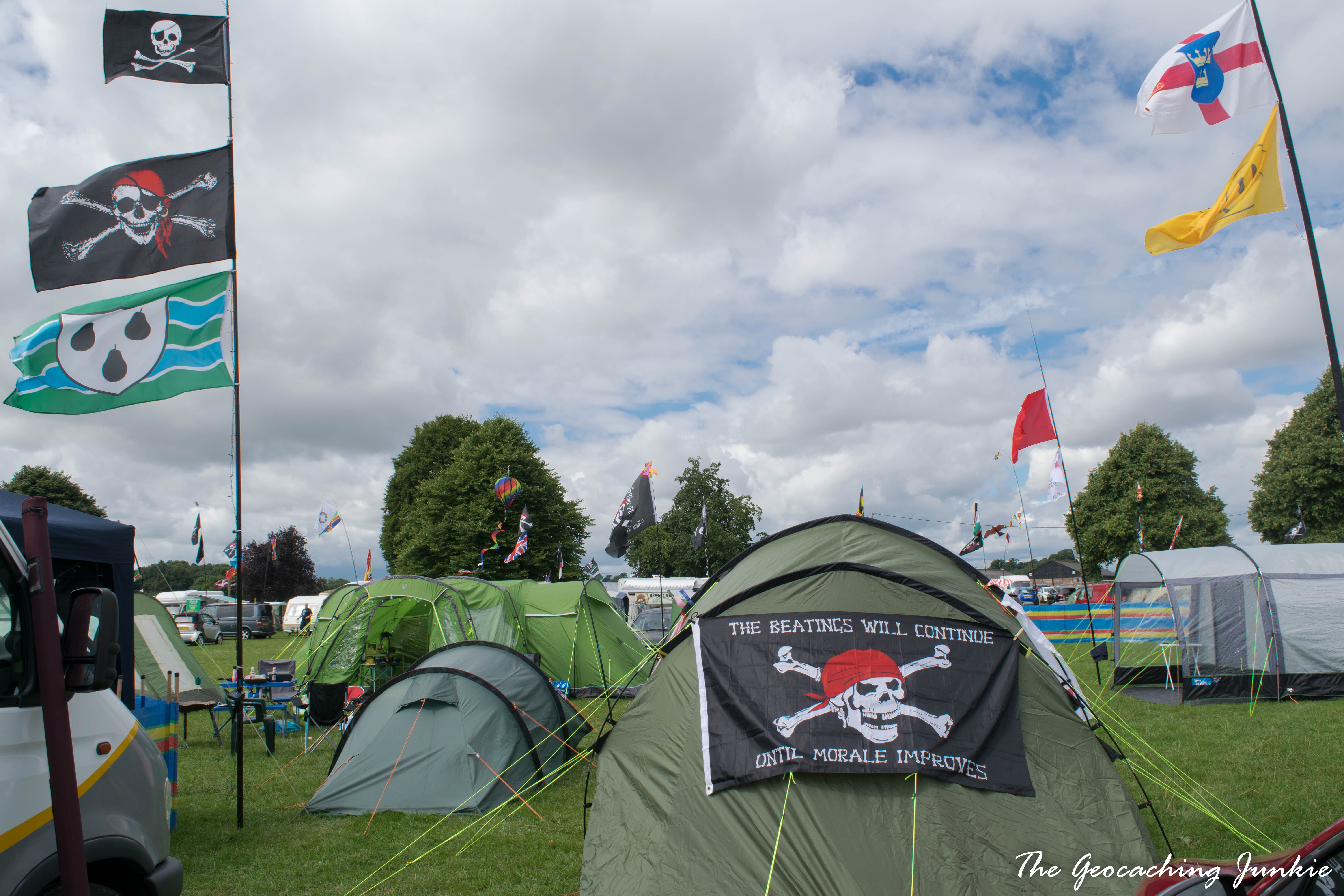 A quick search on the geocaching map when we had arrived in Wem showed up a mystery cache with fake coordinates very close to where we were staying. Ghost Town (GC5KN54) tells the story of Jane Churm, who is believed to have started the Great Wem Fire of 1677, by accidentally dropping a candle. Over 500 buildings were lost in the rapidly spreading fire.

In 1995, Wem Town Hall caught fire and a local photographer took some shots of the blaze. What he discovered when he developed the film was the image of what appeared to be a young girl’s face. Was it Jane Churm, whom local legend says still haunts the Town Hall? Check out the cache page for the spooky image and decide for yourself! The puzzle was great fun and something I haven’t seen before. Even if you’re never going to have the opportunity to find the cache, have a look and see if you can find the solution – it’s great fun!

On the day of the mega itself, it was time to don my finest pirate garb, practice my best ‘arrr’ and head for Shrewsbury! 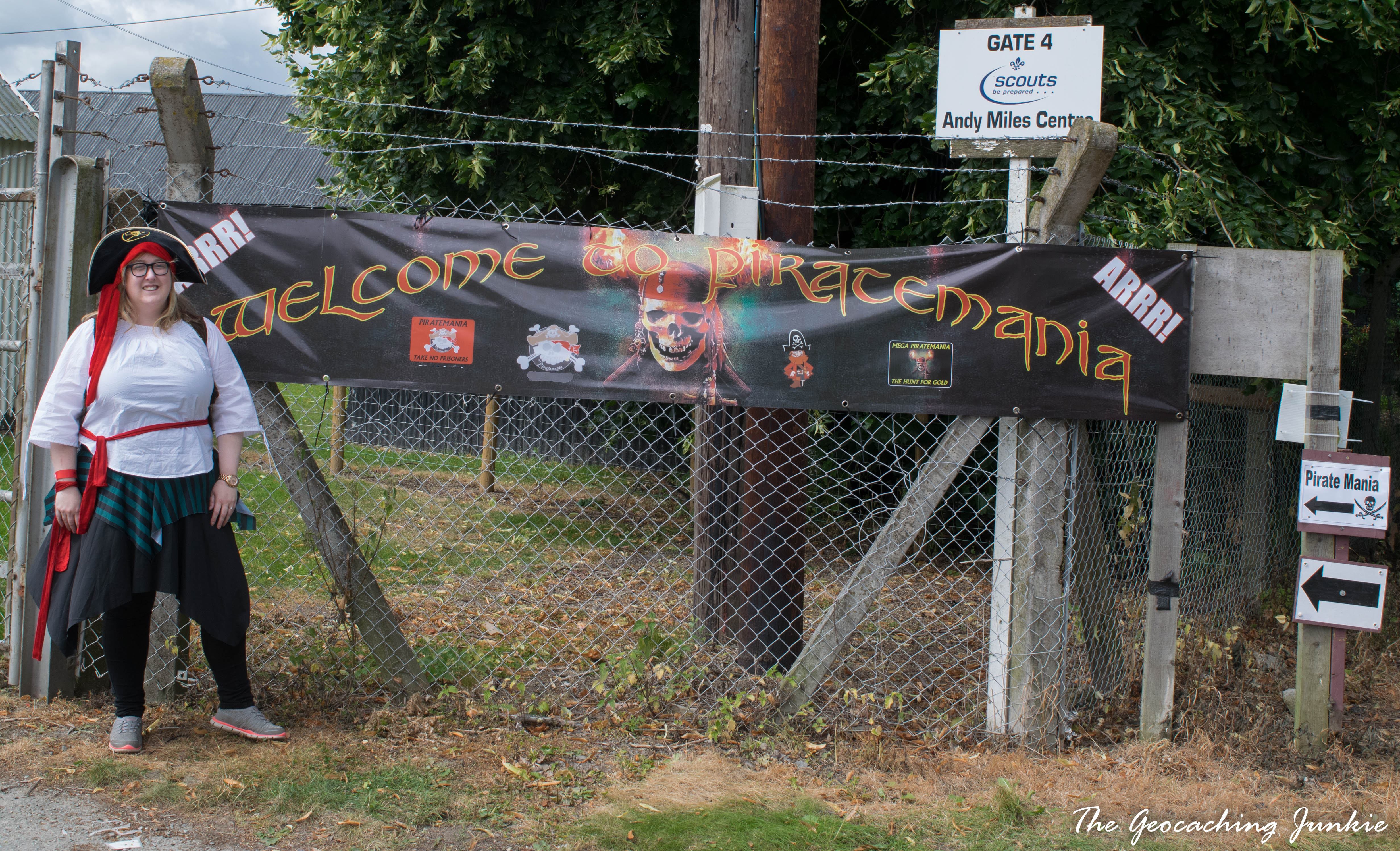 After registering, we had to decide if we wanted to be on the red team or the blue team. We chose read, mainly to match with my pirate outfit. Why we needed to pick a team would be revealed later on in the day.

We started doing some of the new pirate caches that had been laid out for the mega and soon found ourselves in the town centre. Shrewsbury is where naturalist Charles Darwin was born and brought up and the town is dotted with way-markers on the Darwin Town Trail, which highlights locations significant to the Father of Evolution. 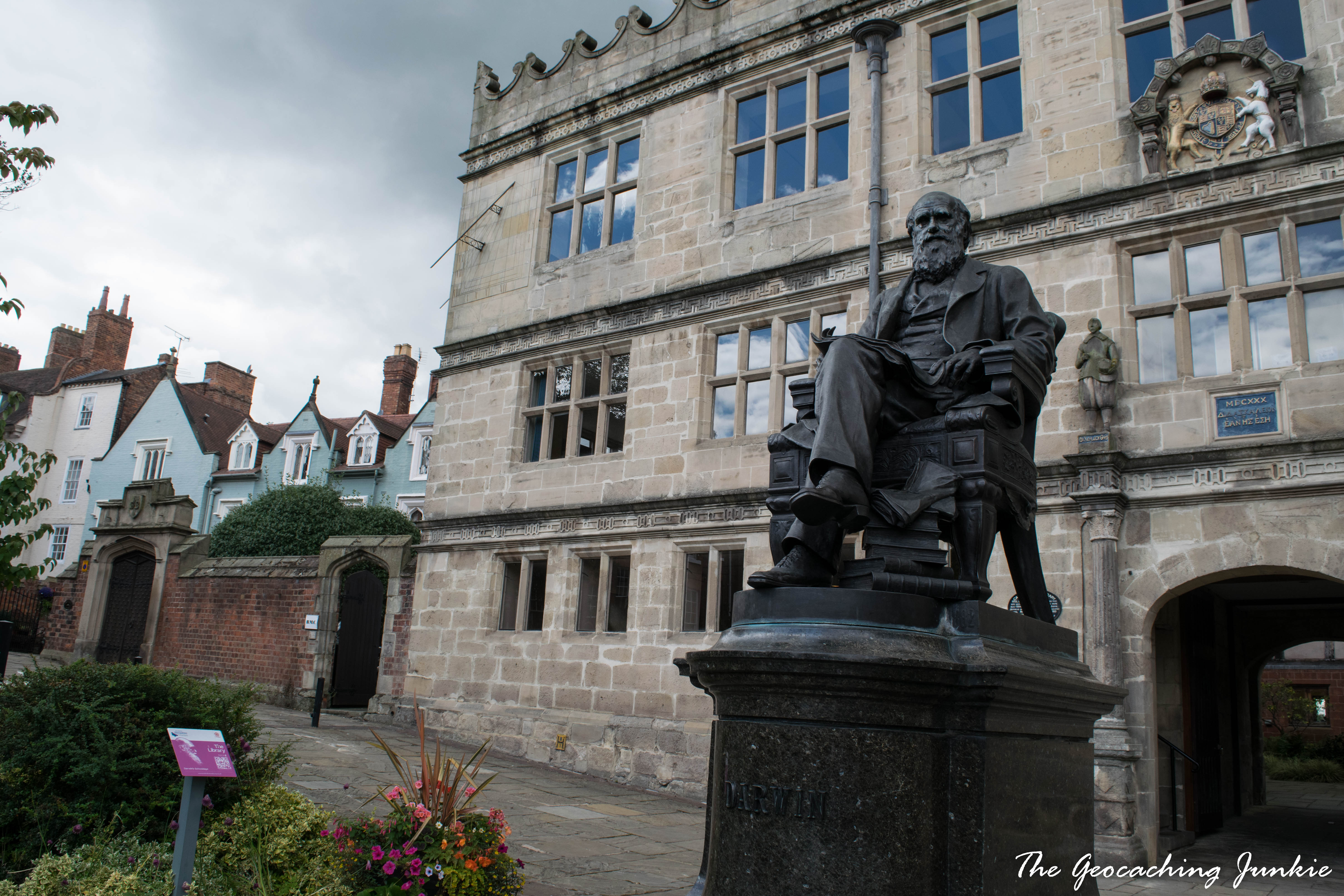 The town is full of historical buildings and has a relatively unaltered medieval street plan, with lots of cobbled lanes and alleyways, called ‘shuts’. It was great to walk around and take it all in, while grabbing a few caches too! 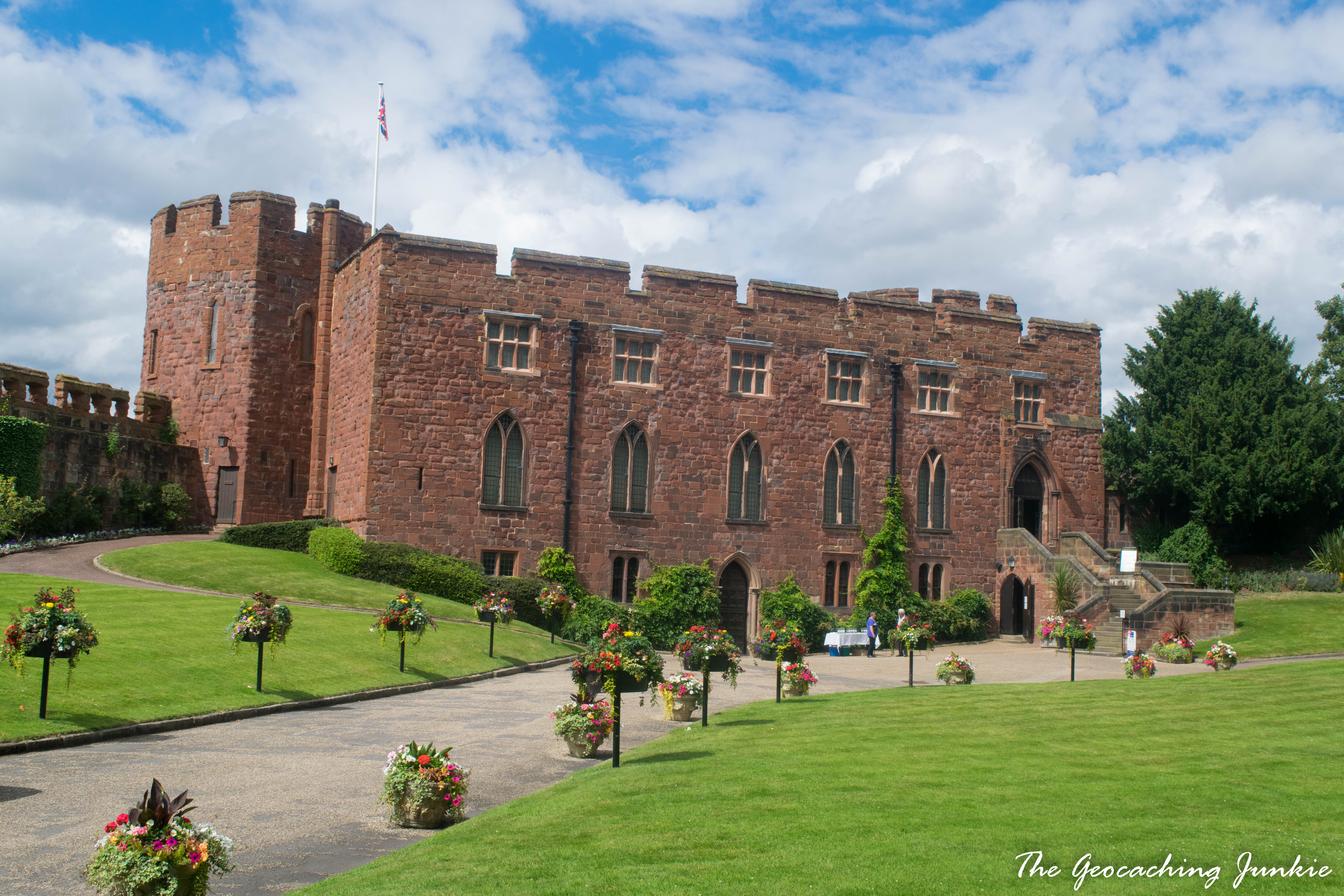 We made our way back to camp to meet up with THE_Chris and the sgtzara‘s for a group shot of the Irish pirate contingent. Either Chris didn’t get the memo, or his outfit got lost in the post – you decide 😉 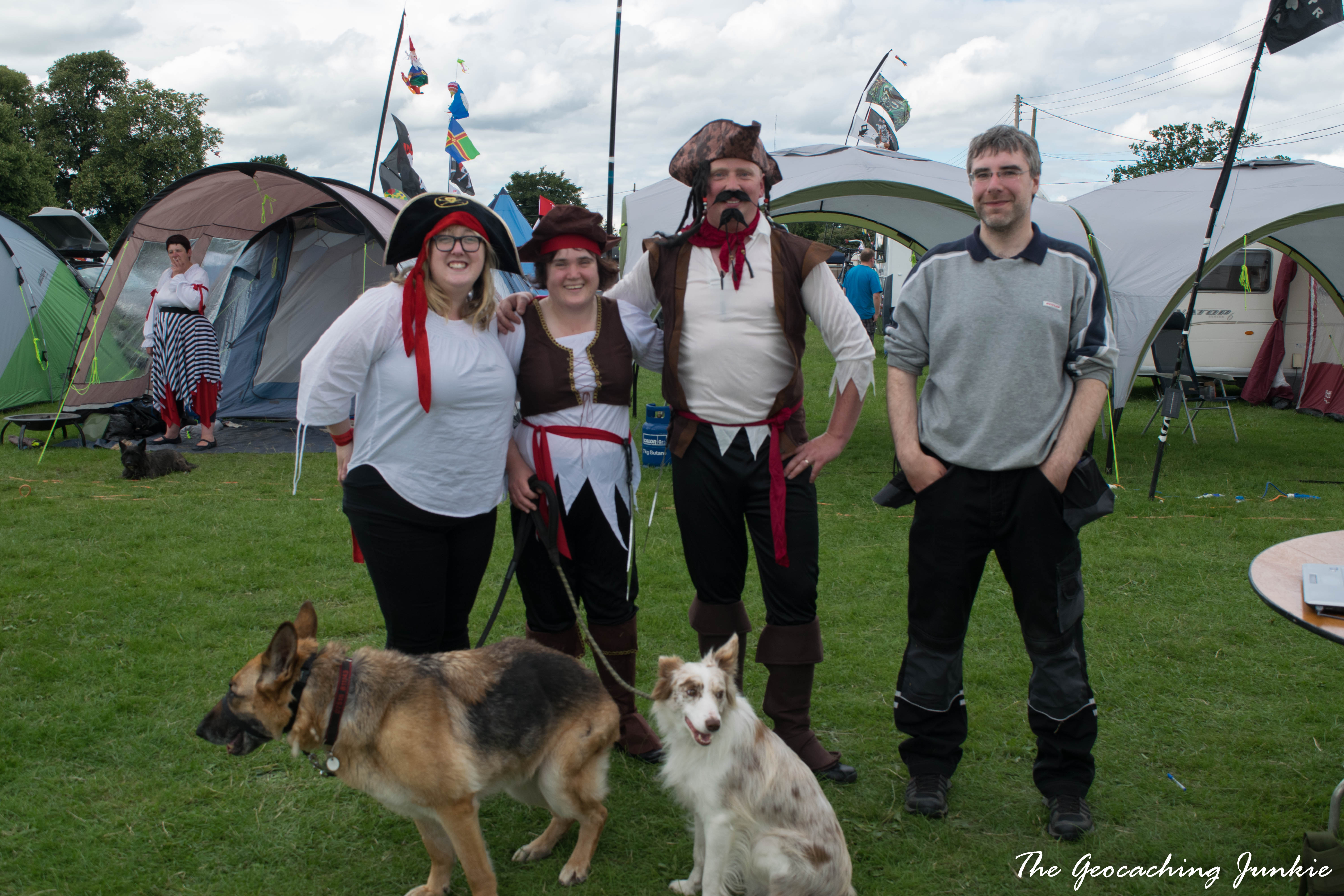 There were pirate outfits everywhere you looked and some people really went all out. I walked past TeamTroy and had to ask them for a picture – how amazing do they look! Ellie the dog was also a very worthy pirate model. 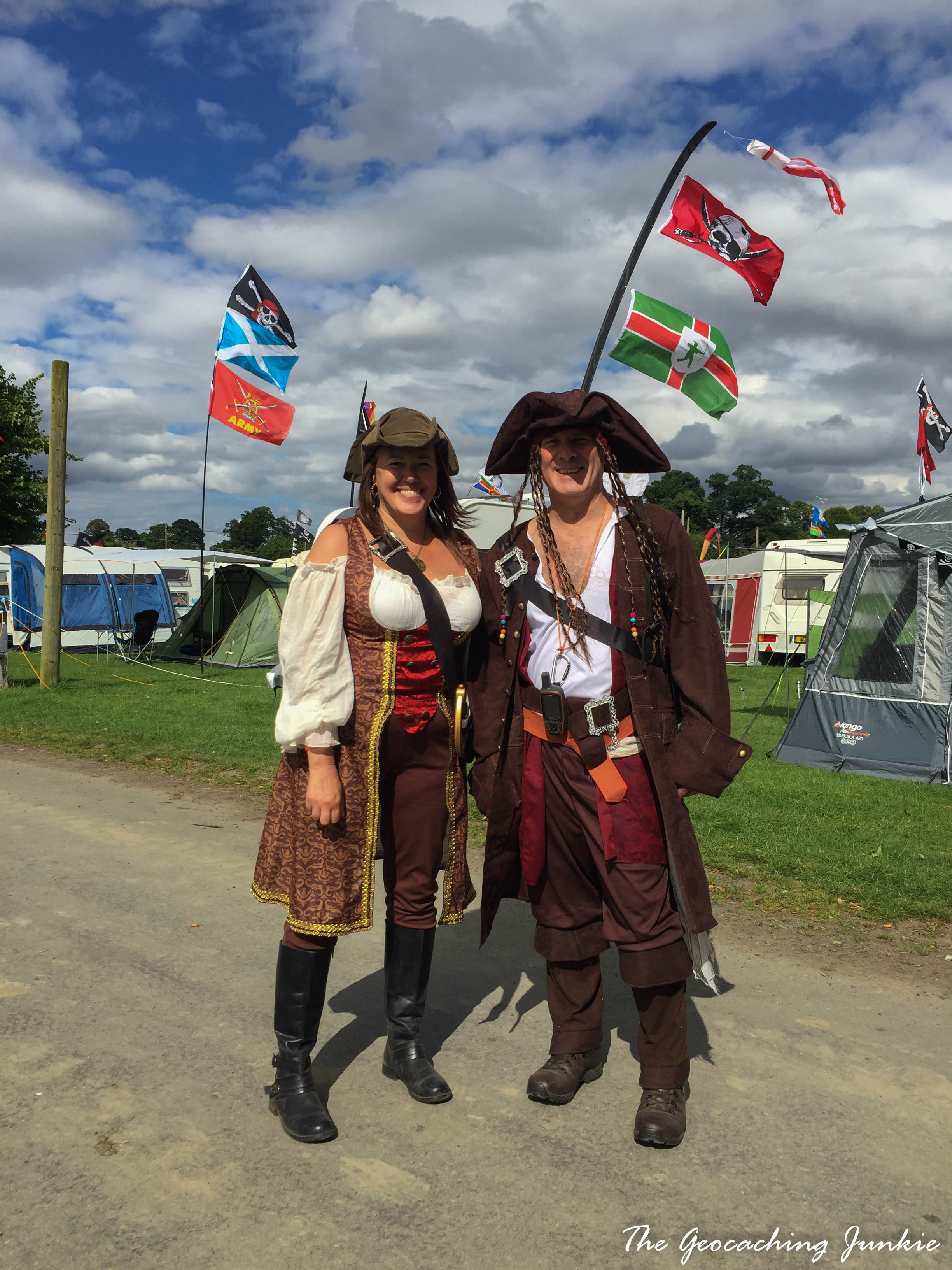 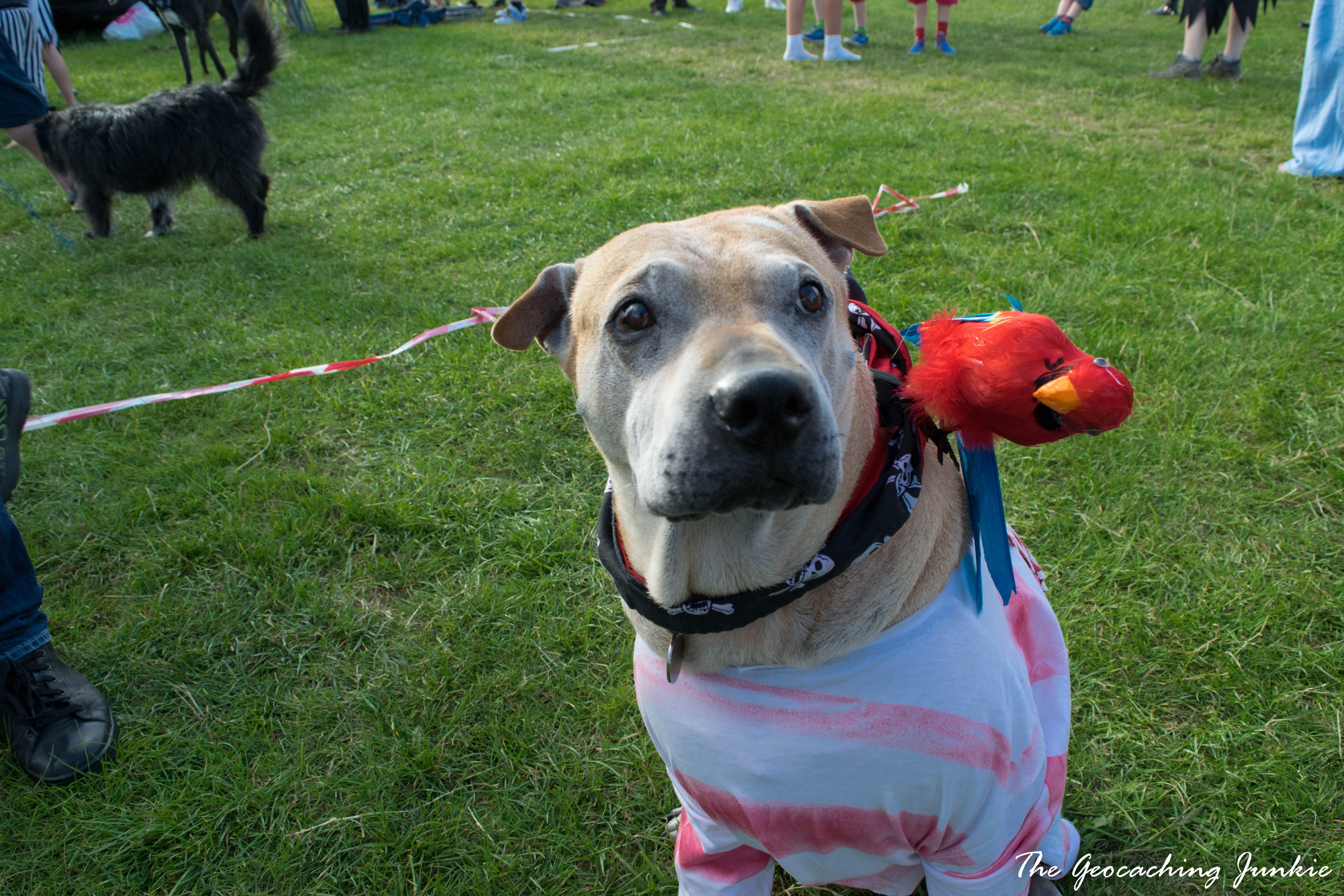 It was soon time for the Tug o’ War – this is where those red and blue team bands came in! Since I was busy snapping photos, I couldn’t help Team Red out, so the muggle stepped in to help the reds to victory! The blues had their work cut out for them as the reds seemed to outnumber them by quite a bit. 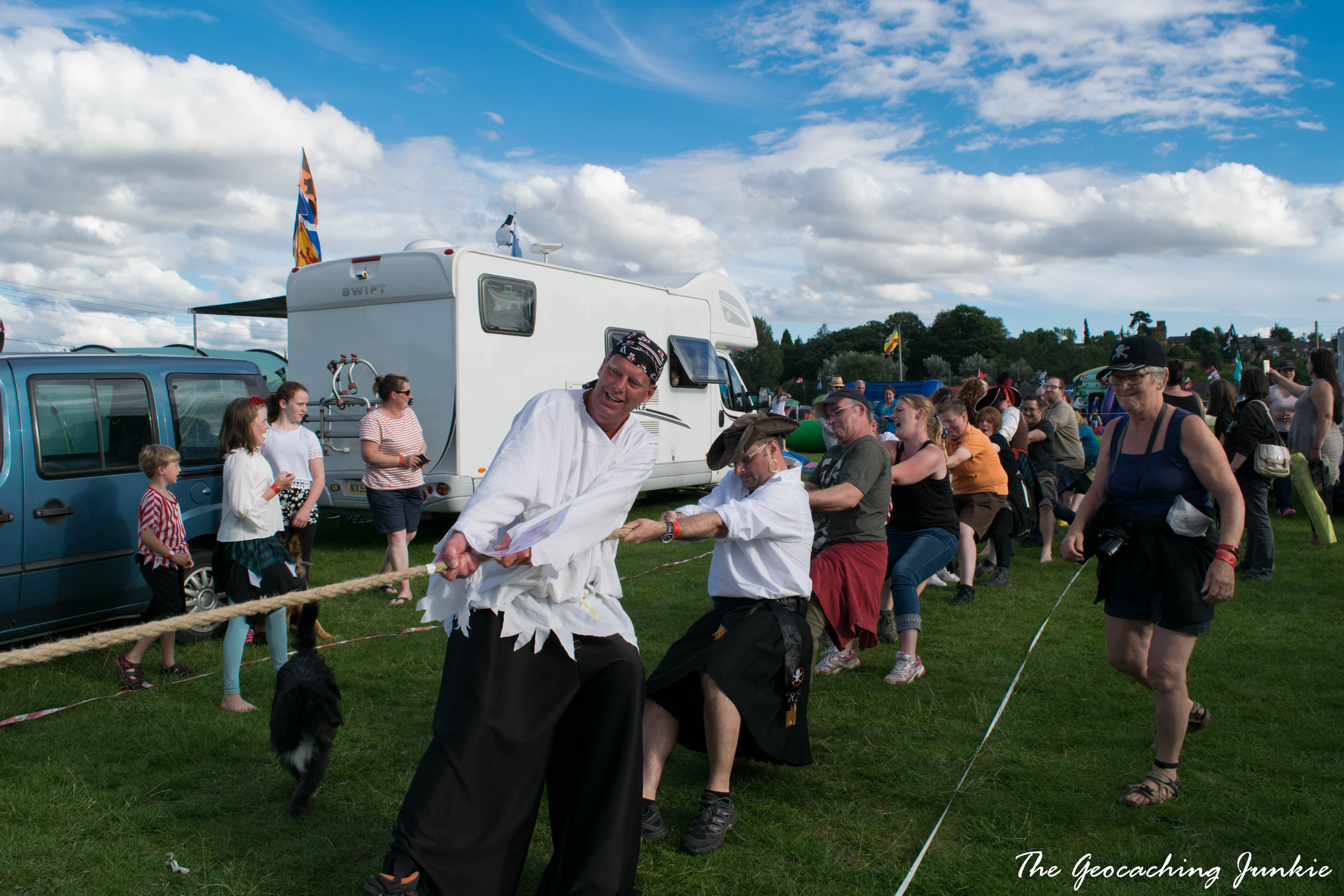 The muggle even got in the pirate swing of things and tried on my hat, though I’m not sure that’s exactly how it’s supposed to be worn! 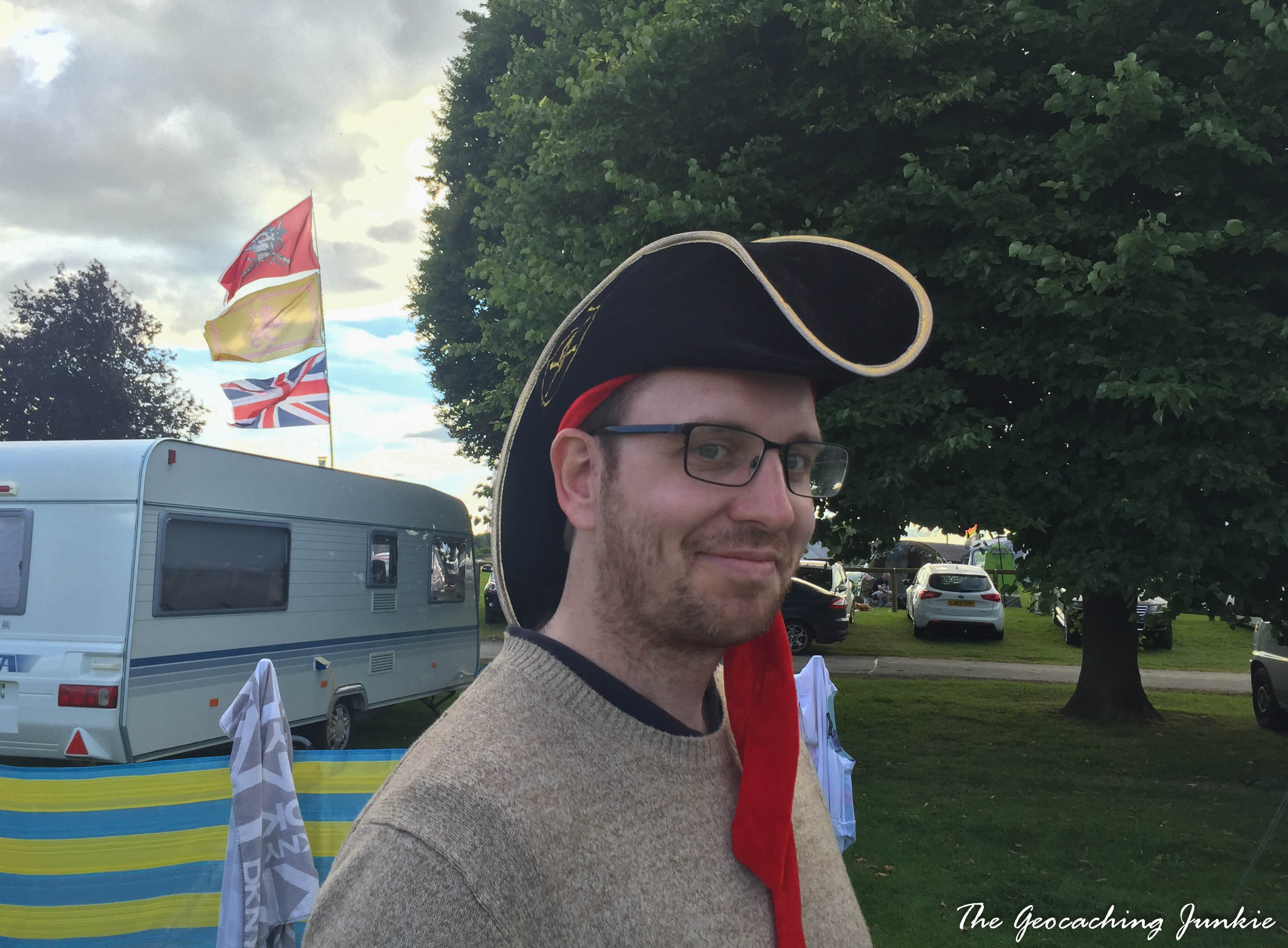 On our way out of Shrewsbury for the last time, we stopped at the EarthCache Lyth Hill – A 550 million year view (GC4K11H) for a stunning view and we even got to go through a 20p toll road on the way there, which was a novelty. 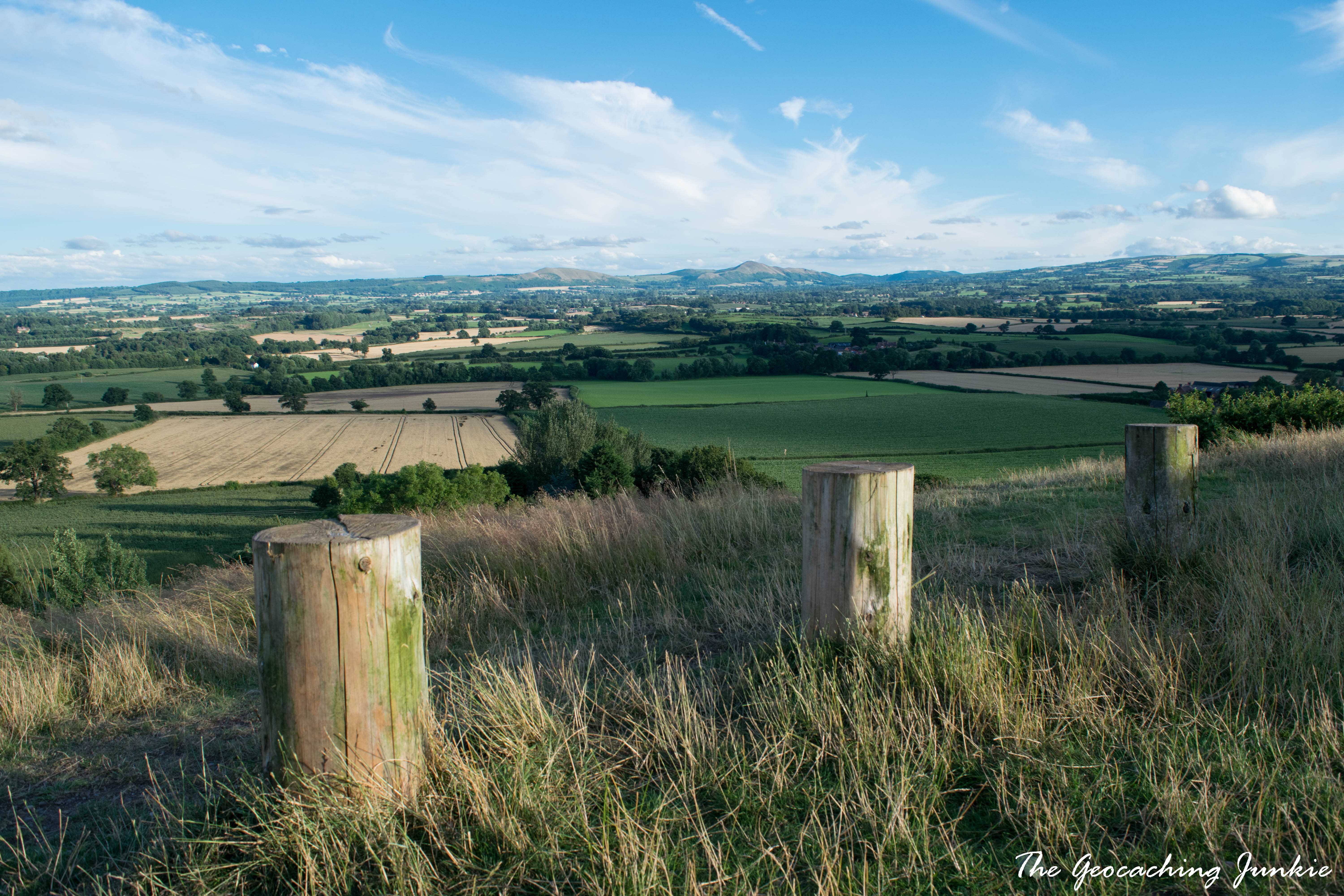 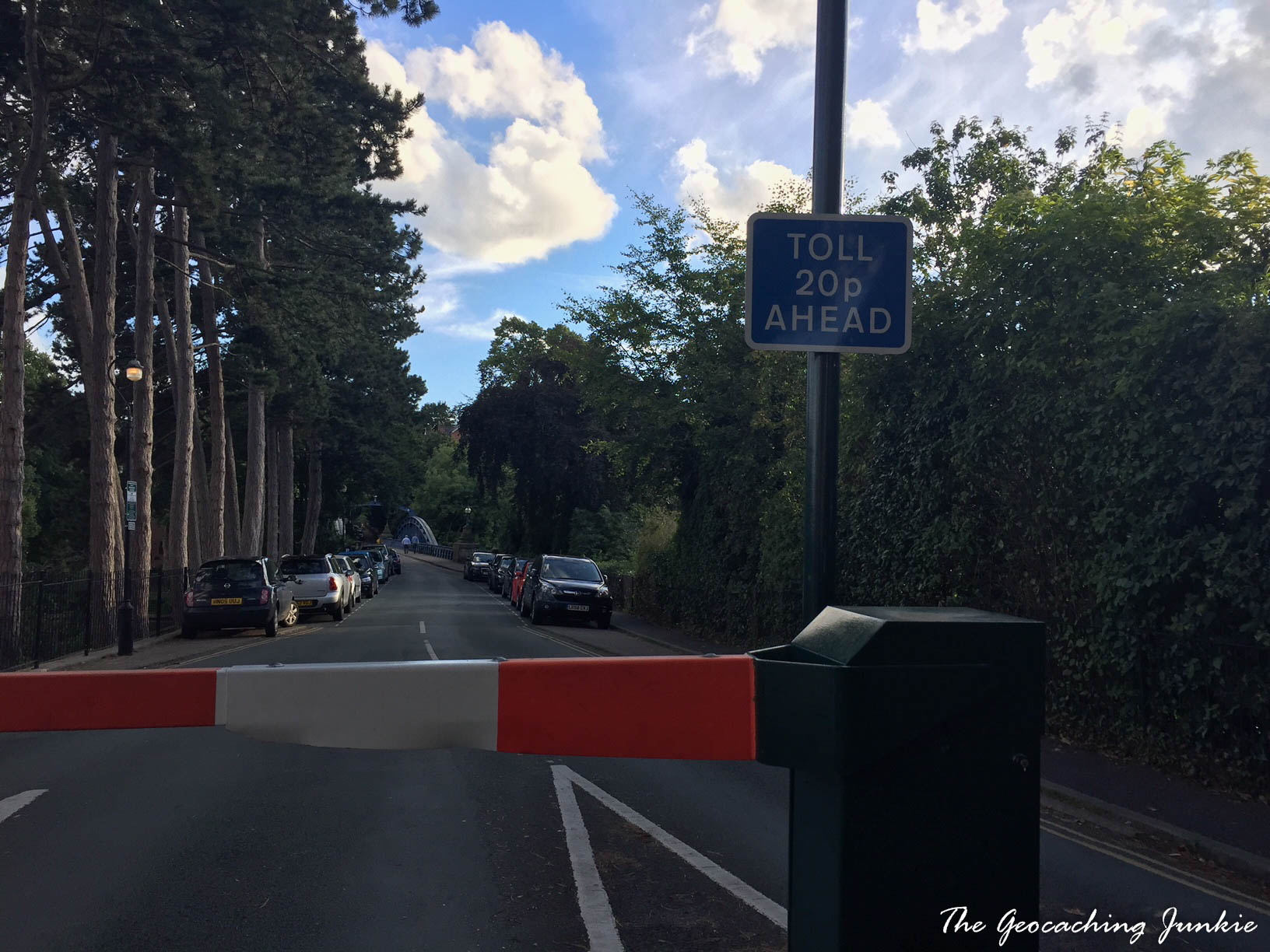 There was just time for the fun Carted Away Wherigo cache (GC4X777) in Wem before it was time to hit the hay and prepare for the next morning’s drive to Hertfordshire for the Geolympix! More of that in the next blog post. Stay tuned and always remember: 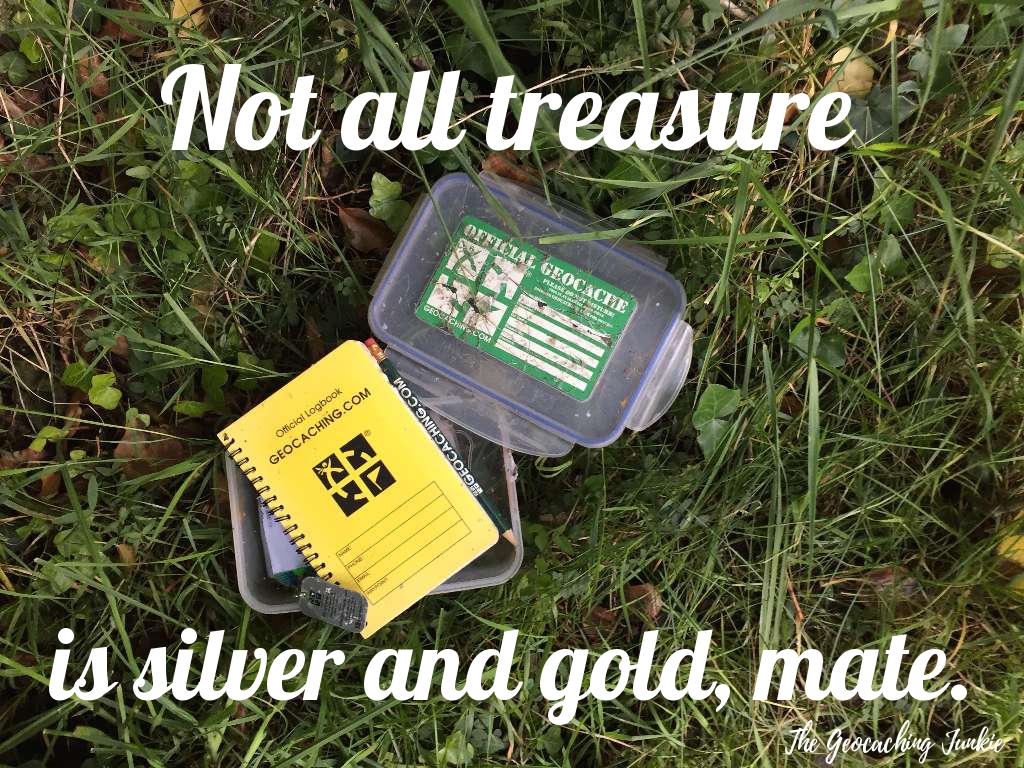 Were you at Piratemania? Have you ever donned a silly outfit for a geocaching event? Let me know in the comments!

6 thoughts on “A Pirate's Life For Me! Geocaching at Piratemania in Shrewsbury | The Geocaching Junkie”