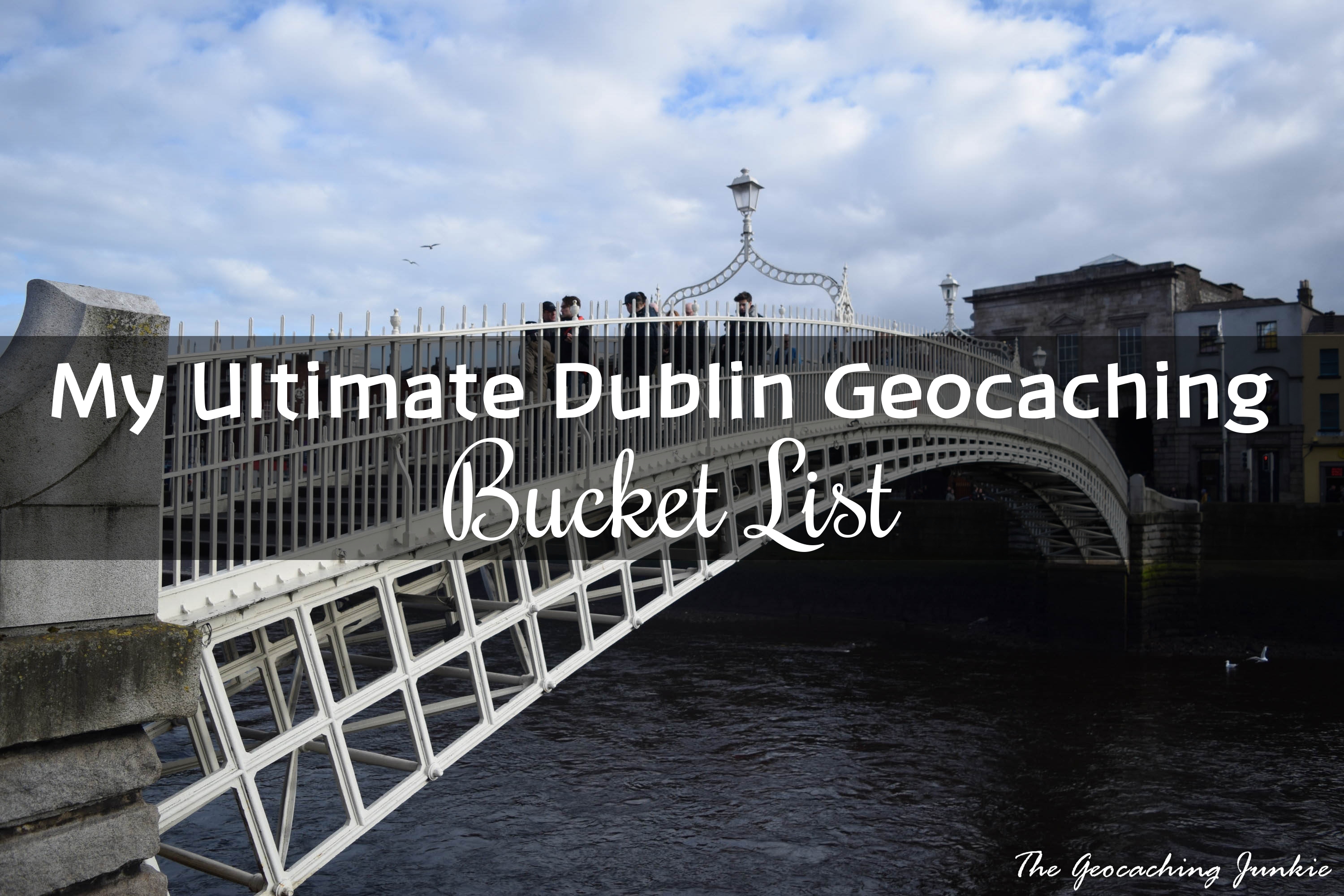 Dublin was recently voted the third friendliest city in the world by Condé Nast Traveller and there’s no denying its reputation as a city of affable locals. While there is still a vibrant, urban buzz to the centre, a short journey eastwards and you’ll reach the Irish sea with its mix of pebble and sandy beaches, while only a few kilometres to the west and you’ll reach the Dublin Mountains National Park with its walking trails and unparalleled views.

For the geocaching traveller, there is plenty to keep you busy and the mix of landscapes means there is something for all preferences and abilities, whether you like extreme, remote or urban caches!

Below is my ultimate Dublin geocaching bucket list: a work in progress as I will doubtless become aware of other caches and as new ones come along.

For the history buff…

Probably my favourite multi-cache in Dublin, the information can be gathered quickly and it brings you to two interesting locations: Famine, the haunting memorial to victim’s of the Great Famine, and situated on Custom House Quay in the city centre, and the Jeanie Johnston, an authentic replica of the famine ship that was built in Tralee, Co. Kerry.

With 10 stages spread out over the city, this multi may be long but it’s very worth it to get a complete picture of the events surrounding the Easter Rising in 1916 and to explore some of the most important locations from that time.

For the culture vulture…

Another long multi, James Joyce fans will revel in following the footsteps of Leopold Bloom as he makes his way around Dublin City Centre. The route is dotted with Ulysses plaques embedded in the pavement.

A special virtual cache located in Howth. The cache owner remains tight-lipped on the cache description as to what you can find at GZ, but music lovers will be glad they paid a visit here.

For the nature lover…

With a peak of 757m making it the highest point in Dublin, Kippure straddles the Wicklow and Dublin county lines.It’s easy to pick out Kippure from the surrounding hills as it’s crowned by a 110m transmitter. The easiest route is via a gated access road and the summit affords great views of Dublin, Bray, the Irish Sea and the neighbouring mountains.

This multi starts on Killiney Hill, with a decidedly lower summit than Kippure at 153m but nonetheless with very impressive views over Dublin Bay. Once you’ve gathered the required information there, a five minute boat trip to Dalkey Island is in order to nab the final. Now uninhabited, there is evidence of human settlement there dating back to 6,000 years ago. There is a ruined church, Martello tower and promentory fort to explore and a herd of wild goats to spot. Easily one of my favourite locations in Dublin.

North Bull Island was created over 200 years ago following construction of the north bull wall to Dublin Port. It’s currently 5km long and 1km wide and its existence is a rare natural occurrence in Ireland. A UNESCO Biosphere Reserve since 1981, the island is home to an array of special birdlife. The island’s seaside is known as Dollymount Strand and is easily one of the best beaches in Dublin.

For the drinks connoisseur…

Even if you don’t have a drink at all 23 pubs (go on, I dare you!), Southside Pub Crawl still offers a great tour of the highlights of the city’s south side. The River Liffey splits Dublin in to north and south and there is much rivalry between northsiders and southsiders.

If you’ve done the south side, it would be positively rude not to enjoy the delights of Dublin city’s north side! If you can still think straight after visiting all 17 pubs and sampling the local brews, let me know who you would side with in the great north versus south debate!

10. The Guinness Logbook of Records, traditional cache by tmsr (GC1JE8J)

Speaking of local brews, the world’s most famous stout originated at St. James’ Gate Brewery in Dublin 8. You can go inside and take a tour (for a hefty sum), but even if you don’t, make sure you swing by to take some photos and get your name in the Guinness Logbook of Records!

One of my favourite caches of all time, and I’m not the only one who thinks so with an impressive 78% favourite point score at time of writing (it should be more!), this cache is not only in a beautiful location at Bohernabreena reservoir, but it’s a handmade, amazing feat of engineering by the CO which will both frustrate and delight you in equal parts. You will not be sorry you did it! It’s one of three Crystal Maze caches to do in Bohernabreena, all worth your time but this one is the best 😉

To do this mystery, you need to first solve and find Confidential (GC2HPB3) and then Top Secret (GC2HQGK). Both of the preliminary caches are excellent too but Highly Classified will have you really getting in to the spirit and talking like a secret agent in no time! For added enjoyment, get a few friends together to crack the code and complete your mission.

For the thrill seeker…

I have to admit I haven’t found this cache yet but I have been told what to expect and it involves a tight squeeze, a kitchen appliance and a cool view. What more could you want from a cache?

This cache is listed as a mystery because it’s not possible to get exact coordinates at GZ – it’s hidden in a sea cave in Howth, north county Dublin. Up there with one of the best geocaching adventures I’ve ever had, it should only be attempted at low tide!

Another adventurous cache in Howth, Lion’s Head has a puzzle to decipher first but once you’ve taken care of that, the real fun begins! A climb over a fence, followed by a scramble down a steep bank while holding on to a mystery rope (what is it tied to?!) and soon you’ll be near the cache, where you’ll find a bizarre mystery item. If you want a surprise, just go do it, but if you want to know what to expect, check out the cache gallery!

For the urban enthusiast…

A truly ingenious urban hide in the leafy South Dublin suburb of Dalkey, The Metals was the metal tramway that linked Dalkey Quarry to the harbour at Dun Laoghaire. Now it’s also a tricky and creative cache with 68% favourite points!

The last remaining webcam cache on the whole island, a stop off on the corner of Gardiner Street and Talbot Street north of the Liffey is well worth doing as a memento of your trip!

You can see my bookmark list of these caches here. What Dublin caches would you add to the list? Let me know in the comments!