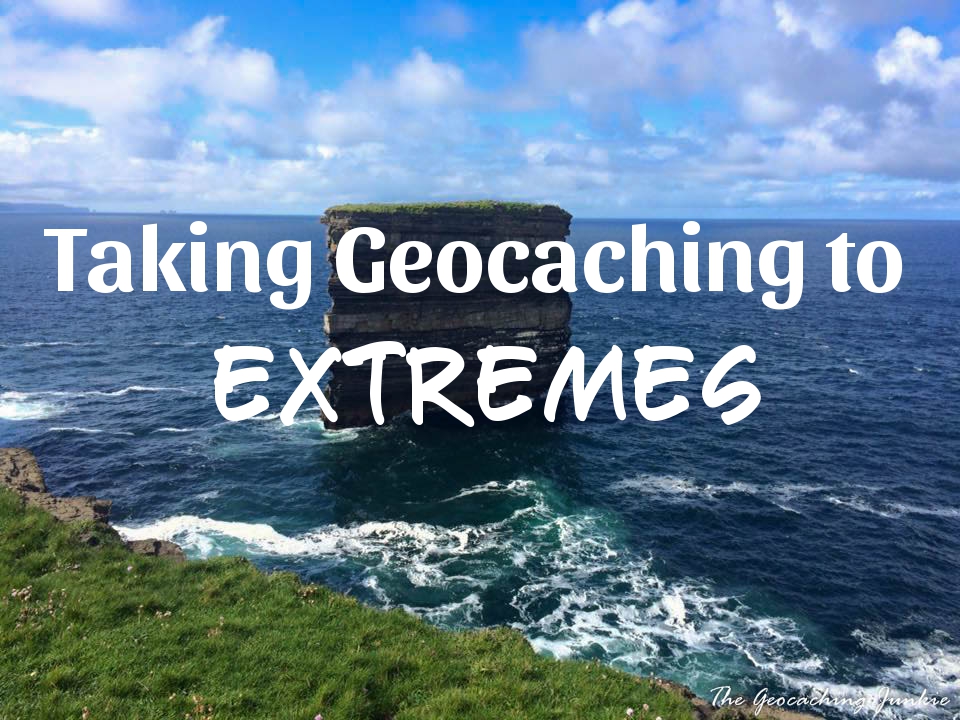 You know that exhilarating feeling when you finally catch a glimpse of an ammo can peeking out from that cacher’s pile of rocks, after you’ve shed sweat and tears scrambling up a mountain and almost gave up several times? Or the feeling that you get after swimming in to a sea cave, then climbing on slippery rocks amongst various crawling creatures and finally spotting your prize as the light from your head torch bounces off the plastic of a Tupperware container?

Extreme geocaching can be many things to many people, depending on how much risk is required to get that feeling of adrenaline rushing through your veins. For mountain instructor Iain Miller, only the most adventurous locations are worth geocaching in. I caught up with Iain earlier this week and I had a stack of questions about his love of sea stack climbing and scaling the heights of daredevil cache owning.

Iain does daring things for a living as the company director of Unique Ascent, which offers thrill seekers the chance to partake in activities like rock climbing, abseiling and sea stack climbing. Iain began sea stack climbing in 1998 on the Orkney Islands and started tackling Donegal’s stacks in 2007, at which point there were over 100 sea stacks in Ireland not yet climbed.

Iain discovered geocaching in 2013 when a US visitor he was guiding asked for his help with a climbing cache in County Kerry. The idea to combine his love for sea stack and mountain climbing with his new-found hobby was immediately obvious.

To date, Iain has hidden 24 caches, and the majority of them can be classed as extreme. I have only found one so far and can safely say it was one of the scariest caches I have ever found. Check out my post about finding one of his T4 caches, An Bhuideal (GC4Z8YW), in Donegal last July.

Thirteen of Iain’s caches are rated T5 and eight of those are as yet unfound, with several waiting over two years for FTF. One of those caches is atop Tormore Island, Ireland’s highest sea stack, which Iain was the first to ever conquer. These caches are certainly not for the faint-hearted, or indeed, the ill-equipped and unprepared – check out Iain’s YouTube video below to see for yourself.

Iain’s caches are much talked about in Irish caching circles and when his latest impressive ascent of Dun Briste in County Mayo was written about in the Irish Independent, the story was soon shared on the Geocaching Ireland Discussion Group on Facebook, amidst much speculation about a new cache appearing soon.

The iconic sea stack, sitting just off the coast at Downpatrick Head, was severed from the mainland in the late 14th century during very stormy seas. Several people had to be rescued and there is still evidence of ruins on the stack to this day. Dun Briste has been on Iain’s hitlist for 12 years:

It had gone to the top of the list two years ago after I paid the stack a visit. It took 4 visits and three attempts to stand on the summit. The planning and logistics of such an ascent as Dun Briste take by far the longest time including sea conditions, climbing difficulty and of course how to get back down again, which is always a concern.

You can just about spy Iain as a dot on top of Dun Briste in the above photo. Naturally, while he was up there, Iain placed a geocache and FTF is, unsurprisingly, still up for grabs. He doesn’t expect this to change for a while yet. The stack was climbed only once – 26 years ago – before Iain and his climbing partner Paulina Kaniszewska’s ascent. What are the chances of a geocacher being the third on the list of conquerors? The challenge is set!!

Iain is not finished hiding extreme caches – he has another 22 places in mind to hide geocaches on “Ireland’s iconic nautical summits.” I can’t wait to see where the next cache pops up!

Are any extreme geocachers out there now perusing the list of Iain’s hides and planning a trip to Ireland? What’s the most extreme geocache you’ve ever looked for? Let me know in the comments!

Huge thanks to Iain Miller for taking the time to answer my questions and to Marion Galt for the use of her fabulous photographs.

You can find Iain at this website Unique Ascent: http://www.uniqueascent.ie/ and watch the video of his climb up Dun Briste on YouTube here:

3 thoughts on “Taking Geocaching to Extremes: Meet the Owner of Ireland's Most Daring Caches | The Geocaching Junkie”