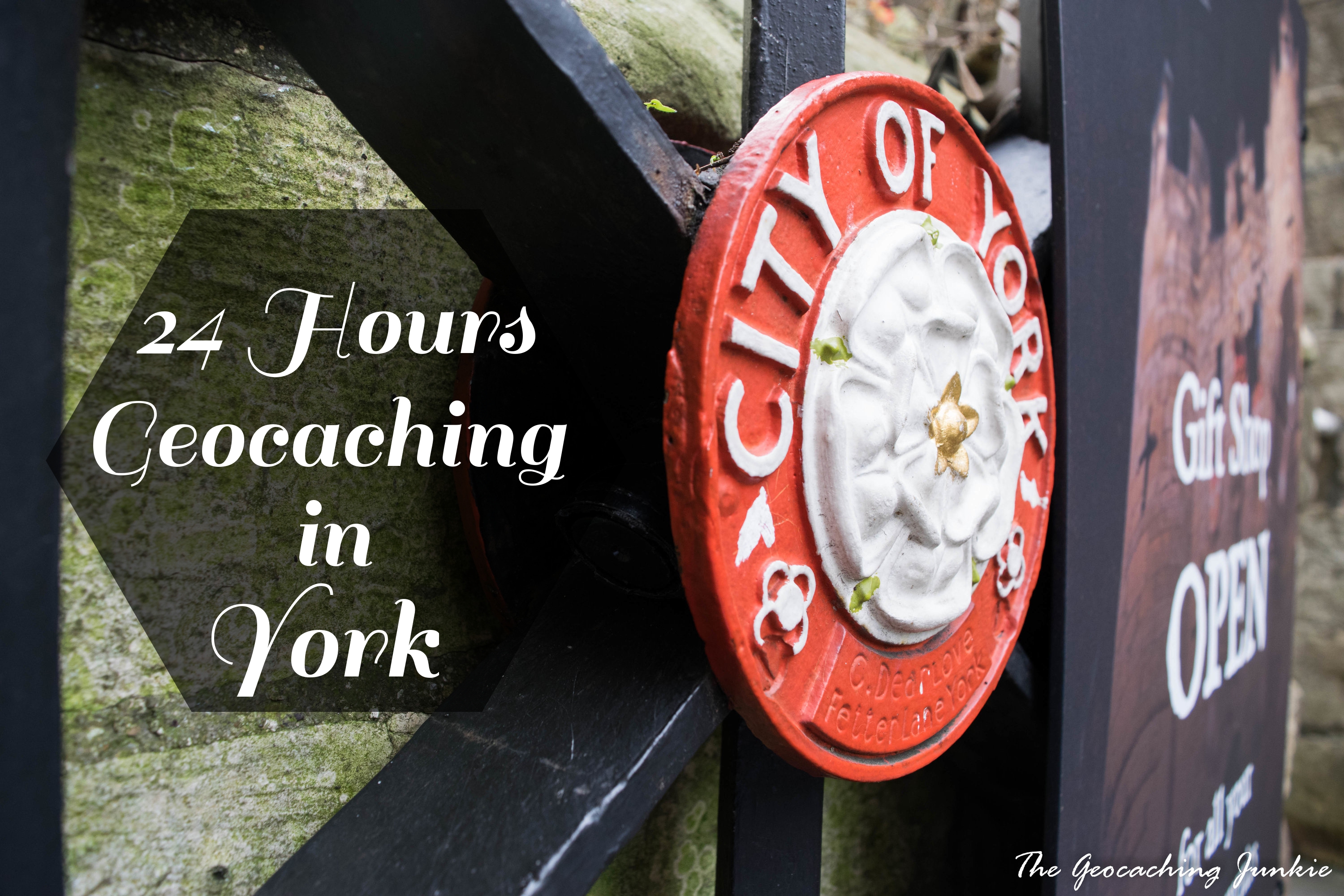 We spent 24 hours in York last weekend, taking in the sights and, of course, using the local geocaches as our guide to see the highlights! The city is very picturesque and brimming with almost two thousand years of history. We could have spent a week there and not seen everything, but here’s what we managed to fit in.

York has 3.4 kilometres of intact city walls, more than any other city in England. The walls have been there in one form or another since Roman times but most of the stonework you can see now is from the 13th and 14th centuries.

The walls are a very popular tourist attraction so it’s best to get there early to avoid the huge crowds and to get the best photo ops! If you walk the entire walls in one go, it will take approximately 2 hours – if you want to find the 8 caches in the York City Walls Trail, add more time – a lot more if you go at peak times and have to engage stealth mode at every GZ! We didn’t do the walk in its entirety as we hadn’t much time to take in all we wanted to do. Even if you’re pushed for time, it’s worth climbing the stairs up to the top of the wall in a few spots if you can.

The minster (cathedral) in York dates to medieval times and is absolutely huge – the nave is the size of a football pitch and can hold 2,000 people! The church micro multi takes you all around the perimeter of the building, so you can really appreciate its immense scale.

While you’re walking around, stop off and do the nearby EarthCache – a Roman Column estimated to date from around AD 100, which was unearthed during excavations underneath the minster in 1969.

Just opposite the column is the statue of Constantine, the first Christian Roman emperor, who was proclaimed emperor in AD 306 in York, following the death of his father Constantius.

If you want to see inside the minster – and you should because it’s stunning – you can pay admission charges (starting from £10 per adult), or you can do as we did and attend one of the services.

Evensong is a tradition in the Anglican church, whereby prayers, psalms and canticles are sung. It is well worth experiencing evensong at York Minster – the choir are very impressive. The service lasts for 40 minutes but it’s a good idea to get there early, not only to get a good seat (it can be quite packed) but also, to take your time finding your seat and taking in the spectacular surroundings of the cathedral – make the most of the fact you got in for free! Just tell the attendant at the entrance that you are attending the service and in you go, free of charge, with the added bonus of hearing an amazing choir.

The Roman Column I – The VI Legion Fortress, GC6K18J

Housing the Yorkshire Museum, the York Museum Gardens are also home to the imposing medieval ruins of St. Mary’s Abbey. We happened across an owl and birds of prey display when we entered the gardens and had the opportunity to hold some magnificent owls (for a small fee), which was an added bonus to the day! 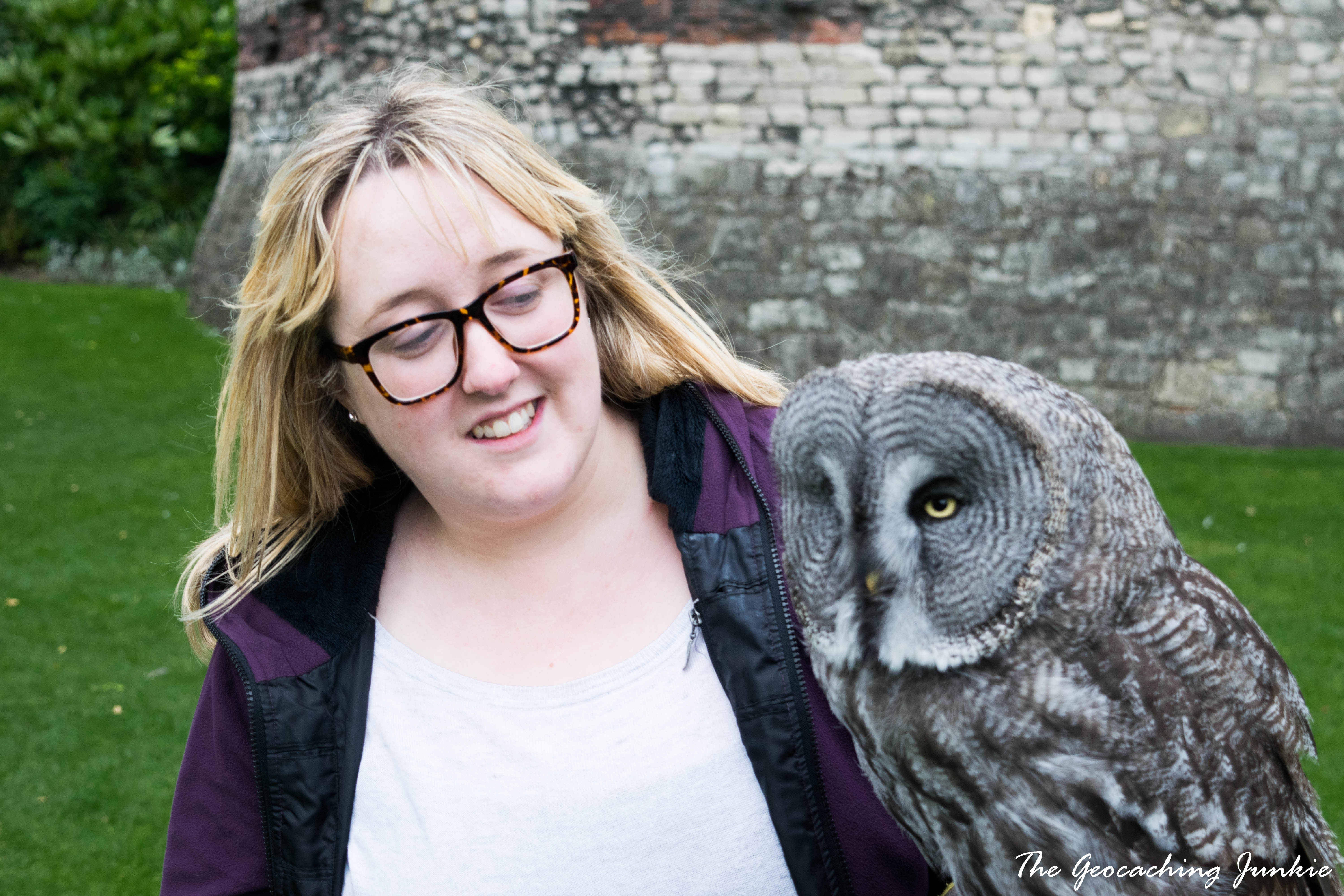 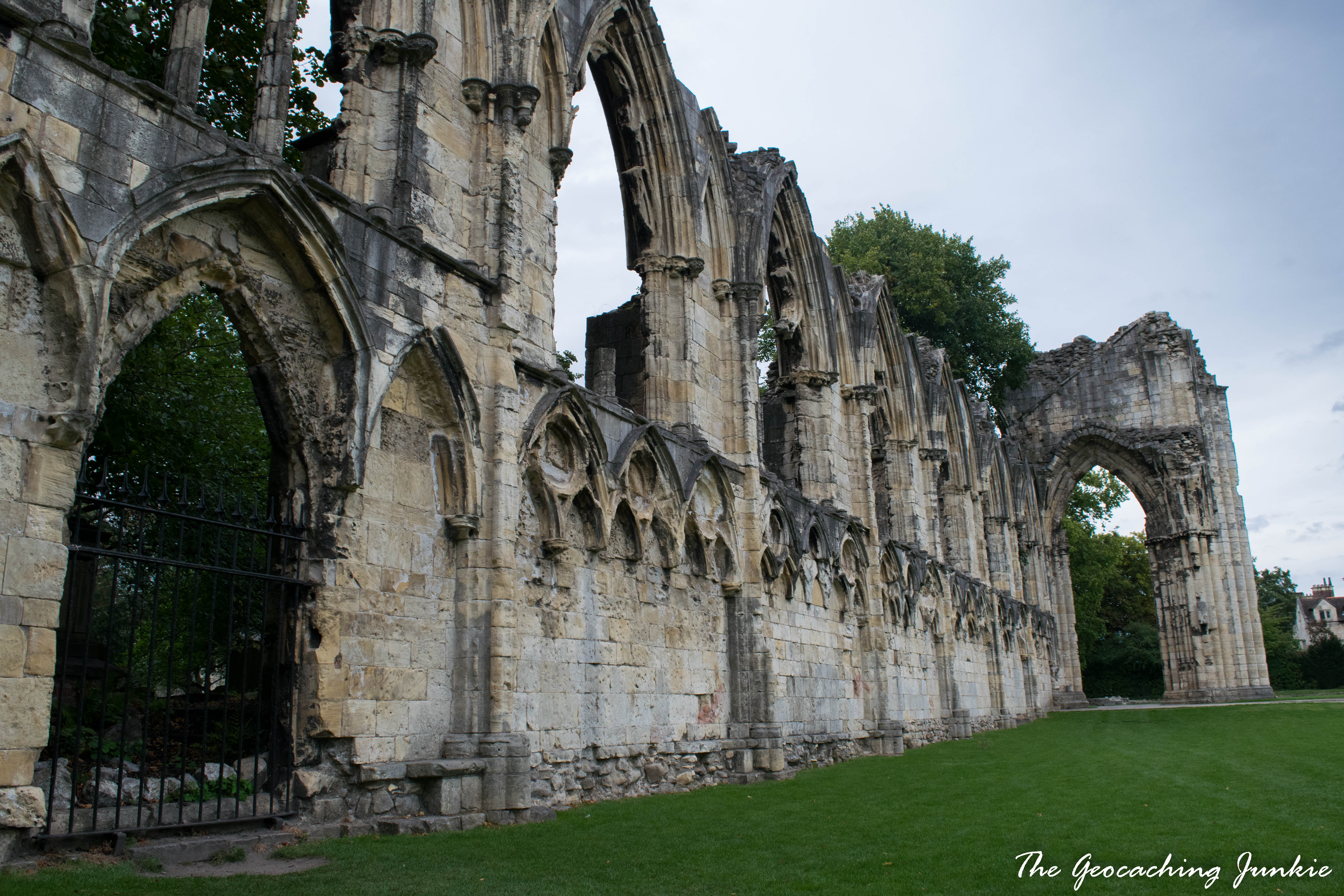 After a walk around the gardens, taking in the ruins of the Benedictine Monastery, which was first built in 1088, we headed next door to York Library on Museum Street. On the left as you look at the building, is yet another ruin, this time part of St. Leonard’s Hospital and in the corner, stands one of the most intact ruins in the city, the Multangular Tower. The bottom half of the tower dates back to Roman times and the top half is from the Medieval Ages. 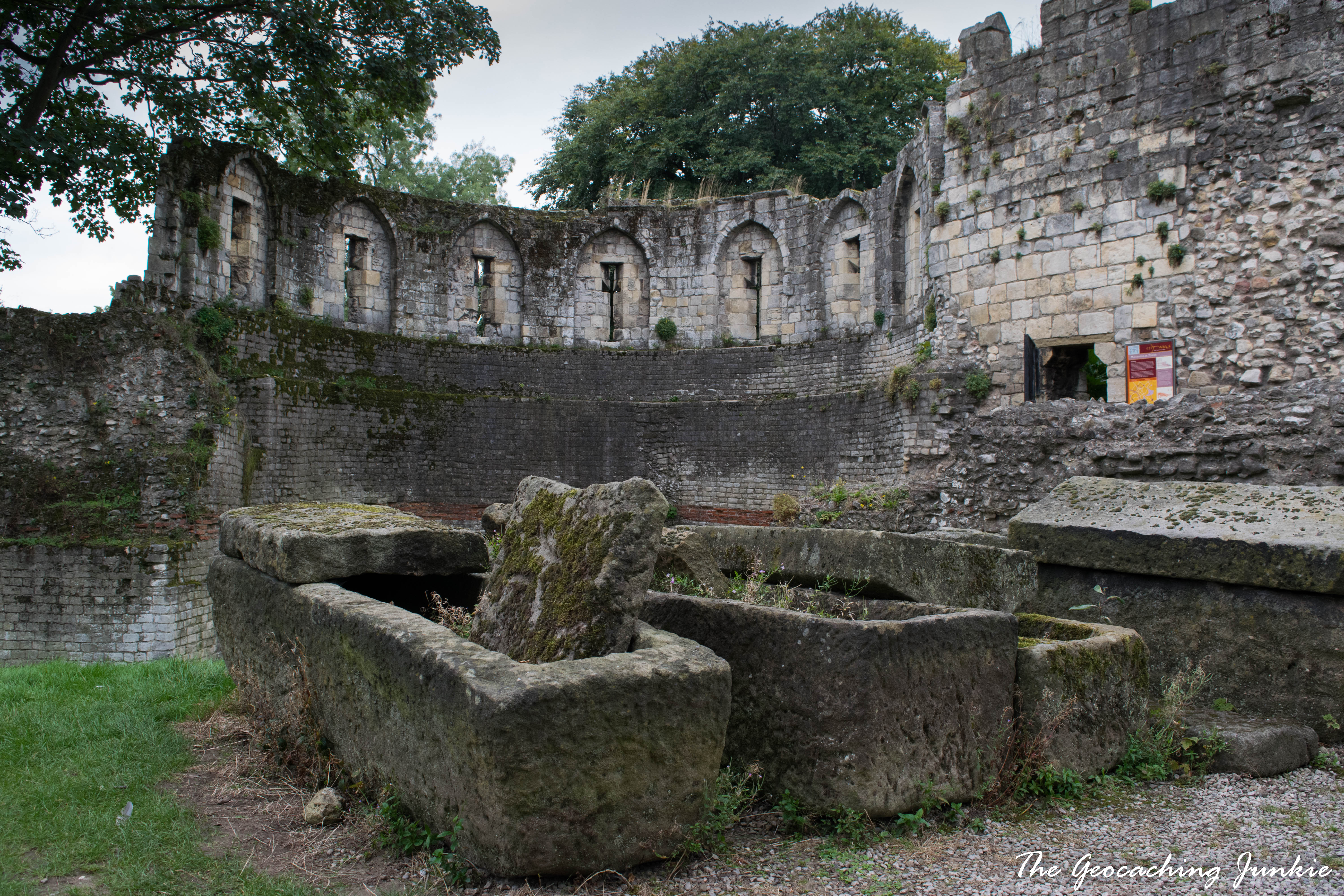 We ventured through the pedestrian gate beside the ruin and followed the needle around the back of the library to the virtual cache Holes in the Walls (N Yorks). We were amazed to see no less than four banks from various periods of history: Roman, Dark Ages, Norman and Medieval. From what I’ve discovered, these ‘banks’ were used as defences, to protect against possible invasions.

There are lots of beautiful old world buildings and monuments dotted around York, so it’s a really lovely city to walk around. We found some very clever caches by Z3ROIN as we strolled around too – I highly recommend looking for them when you’re in York (details listed below)!

The tower is the largest remaining part of York Castle and sits beside the York Castle Museum. It looks most impressive at night when it’s all lit up and not crawling in visitors!

We noticed several seemingly random cat statues as we walked around. Statues of cats have been dotted around York for around two centuries, originally to scare off rats and mice, who carried plague and illness. You can download a map of where all the cats are from here.

What the devil is that doing there?! Well, as it turns out, it’s nothing sinister, but rather symbolises that once upon a time a printer worked out of the building. A selfie with the devil himself is all that’s required to log the virtual cache there. 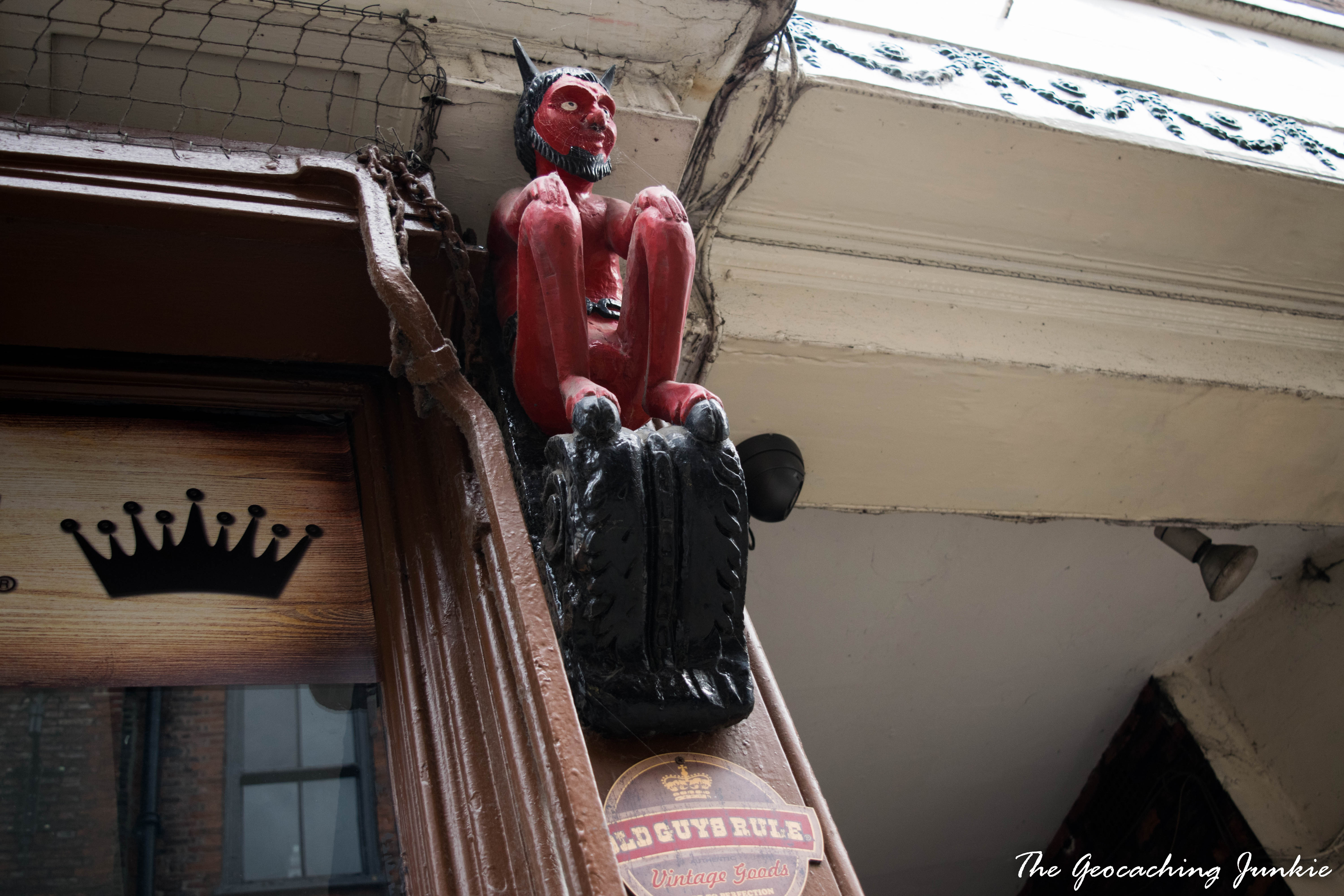 It’s definitely worth walking through the Shambles Market and perusing the many wares on sale from over 80 vendors. The market is open daily from 9am – 5pm. 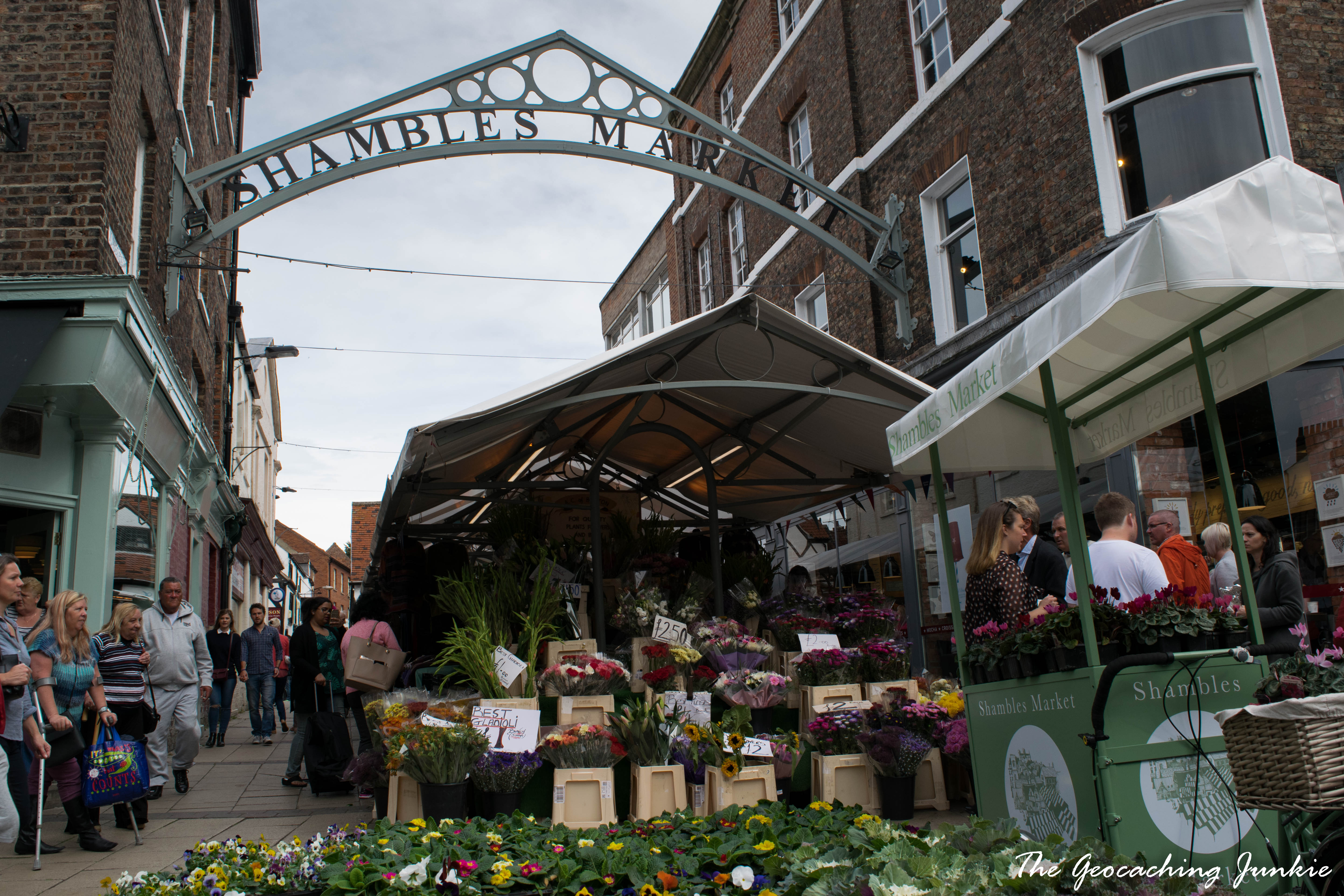 There was just time for a quick geocaching meet up, and it was great to see so many faces that I met at my event in Leeds in March. Special thanks to UGGY for the delicious ginger cake!

Unfortunately, a flying visit meant that we weren’t able to go to the Jorvik Viking Centre, but that’s the first place I’ll be heading on a return trip to the city and next time, it won’t just be for 24 hours.

Having cached in both Leeds and York, I wonder what Yorkshire city or town will be next on our agenda? The UK Mega 2018 is set to be held in Newby Hall & Gardens and we definitely hope to attend and explore another corner of God’s Own County.

3 thoughts on “Welcome to Old York: 24 Hours in the Walled City | The Geocaching Junkie”