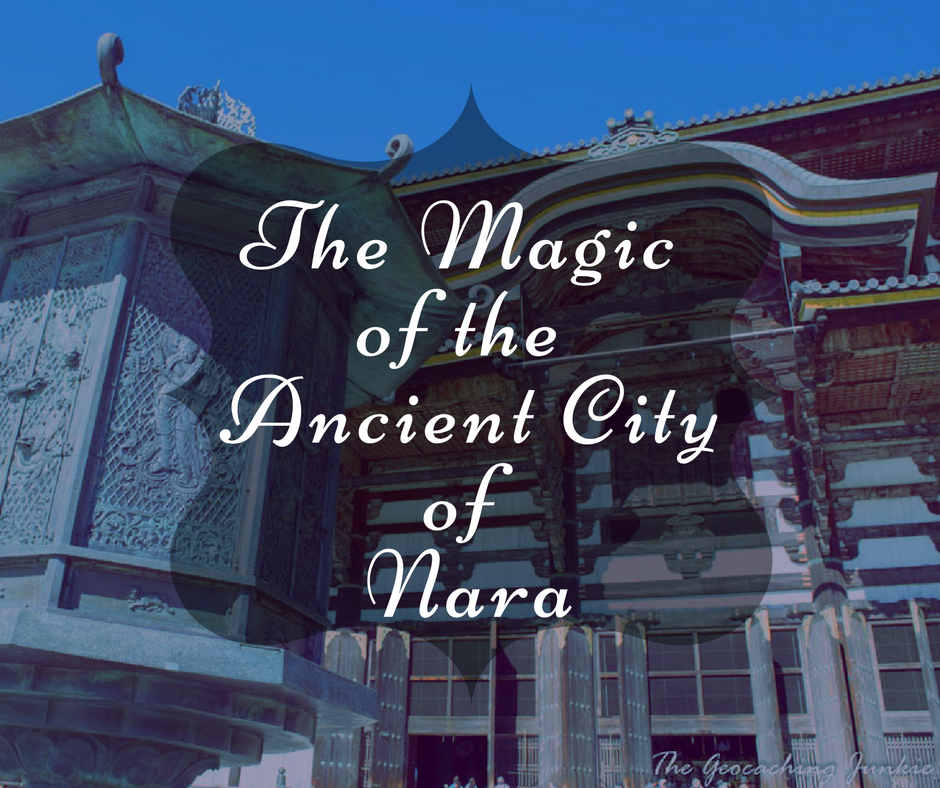 I can’t remember exactly why but about a year ago, I had a light bulb moment and declared, ‘let’s go to Japan!’ In January, after a couple of months of weighing the options and considering other destinations, the muggle and I settled on Japan and booked our flights to Tokyo. Ten months later, we set off on what would be one of the best holidays we had ever been on. We only had 7 short days in the wonderful land of the rising sun but we packed our time with as much as we possibly could, and of course, geocaching featured during the week, with 24 finds in all to earn me a new country souvenir!

We visited three cities during our stay and I’ll write about all three in the next few posts. First up is our visit to Nara in the Kansai region of Japan. Before we had properly started planning, I got some advice from Dublin-based geocacher Dara, who writes the blog A Word from Japan. He said: if you can only visit one place in Japan, make sure it’s Nara. That sold it for me – it was firmly on our must-see list.

Nara was the capital of Japan in the 8th century from 710 to 784, a time which came to be known as the Nara Period and the city is steeped in history. In 1998, UNESCO listed the Historic Monuments of Ancient Nara a World Heritage Site. The designation encompasses eight places, including five Buddhist temples, a Shinto shrine, an imperial palace and a primeval forest.

We visited Nara while we were staying in Kyoto. We both had a Japan Rail Pass – a very worthwhile investment if you’re going to visit more than one city – so we took the Miyakoji Rapid train on the JR Nara Line from Kyoto Station, which took just 45 minutes to reach the city. There is also a local service which stops at all stations and adds 25 minutes to the journey (useful if you want to stop at Inari on the way back from Nara, which we did). The train was packed, mostly with tourists heading to the national park.

It’s an easygoing walk up to Nara National Park – about 10 minutes to our first stop at Kōfuku-ji Temple – on a slight incline and there is lots to see on the way. After visiting Tokyo and Kyoto, Nara had that small city feel and an old-world charm that endeared us both immediately as we made our way up Sanjo-dori Street.

Kōfuku-ji was originally established in 669 in Yamashina (in present-day Kyoto), before being moved to Fujiwara-kyō in 672 and finally to its current location in Nara in 710. The temple was destroyed and rebuilt many times, although several of the buildings were not reconstructed on the final occasion of destruction.

The area is quite awe-inspiring, with multiple impressive buildings, in particular the three- and five-storied pagodas. I was ever mindful that although the temple area is a major tourist attraction, it is first and foremost a place of worship and that needs to be respected.

The Central Golden Hall is currently being renovated but it doesn’t detract from the splendour of the temple and was actually barely noticeable. It’s possible to go inside various buildings and there are national treasures housed within them. We were limited for time so we just walked around the exterior but even so, it was worthwhile seeing those amazing pagodas alone.

The impressive Buddhist temple of Tōdai-ji is another of the Historic Monuments of Ancient Nara. The imposing Nandaimon Gate was built in the 12th century and there’s a geocache tucked in at the left hand side of it.

The gates to Buddhist temples normally house two guardians, or nio and the Nandaimon Gate is no different, with two gruesome-looking figures looming over all who pass through.

Looking back on my photos, I can’t help but think that I should have included another item to show you the scale of the statues there. The bronze statue is immense. Here are some measurements to give you an idea:

When you walk in to the hall, you can’t help but exhale a ‘wow’, crane back your neck and stand there with your jaw dropped. The Great Buddha is flanked on either side by bosatsu statues: Kokūzō to his right and Nyoirin Kannon to his left. Bosatsu are saintly entities in the Buddhist tradition “who, even though having reached the highest stages of enlightenment in their current existences, vow to postpone entry into nirvana (the state of ultimate, existence-transcending enlightenment) in order to help all living beings and lead them toward more enlightened states.”

There are two standing statues in the Great Buddha Hall – Komokuten and Bishamonten, who cut terrifying figures as they watch over the tourists walking around the immense room.

Outside the Daibutsuden and to the right as you look at the entrance is the wooden figure of Binzuru, one of four arhats (perfected beings, or saints). He may seem a tad underwhelming in stature when compared with the immense idols inside, and maybe even a little sinister with his weather worn face, but he is one of the most cherished statues at the temple, with the Japanese believing if you rub the statue on a spot where you have pain or an injury and then rub the same place on your body, you will be healed.

Feeding the Deer in Nara Park

The herd of almost 1,200 wild deer roaming in Nara National Park – designated as a national treasure – were the main reason we made the trip to the city. The experience turned out to be even more magical than we could have imagined.

Local legend has it that when Takemikazuchi-no-mikoto, one of the four gods of Kasuga Shrine (located in the park), arrived at Mt. Mikasa riding a white deer when he visited and from that point, deer were considered sacred. In fact, killing one was a crime punishable by death until 1637. The deer lost their sacred status after World War II, but are still protected under their designation as a national treasure. 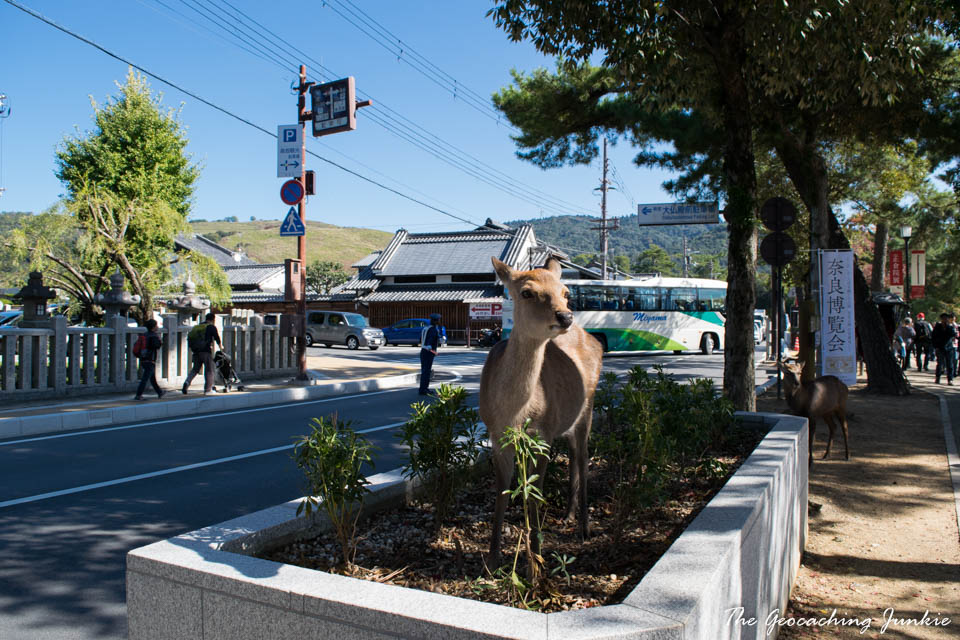 The good-natured deer in Nara are amazingly tame and most will even let you pet them. Many have nubs where their antlers used to be – the annual antler-cutting ceremony took place in early October this year.

The traditional ceremony began in 1671 to help minimise injuries to visitors and locals when the buck deer can become aggressive in breeding season. The cutting also goes a long way to protect trees and buildings in the area from being damaged when deer rub their antlers against them.

For 150 Yen, you can purchase Shika-senbei (deer crackers) from vendors dotted around the park. To open the paper, you twist – we didn’t figure this out straight away and the deer were getting a little tetchy waiting for the crackers and started taking matters in to their own hooves.

You need to have your wits about you: if you’re feeding a cracker to one deer with your right hand, another deer can be trying to pull the rest of the crackers out of your left hand. Not only that, they will tug at any loose clothing to get your attention and will eat anything they might be able to pull out of your bag. If you think you might be a bit nervous, I would recommend not buying the crackers and not eating around the deer at all, as they will try to eat any food right out of your hand (or even your mouth if you’re short enough!).

The best part of the experience were the deer that bowed to us. It wasn’t clear to me if they were bowing to request a cracker or to thank us for a cracker but either way, I was in awe of the clever creatures. I had read about this before we left but to be honest, I dismissed it thinking it probably wouldn’t happen that often and we wouldn’t be lucky enough to see it. Well, I was wrong.

Almost all the adult deer bowed to us (some just butted us and tugged on our clothes!). The younger foals didn’t bow yet but it’s obviously a learned behaviour that they haven’t quite mastered yet. It didn’t matter because they were so damn cute, we were falling over each other to feed them some crackers!

We reluctantly left the deer and Nara behind to head back to Kyoto since we still had plans for the afternoon to visit Fushimi Inari-taisha. On our next trip to Japan, we agreed to stay in Nara for longer as we were both enchanted by the ancient city and there was so much we didn’t get to see on our short stop there.

Until next time, happy caching!