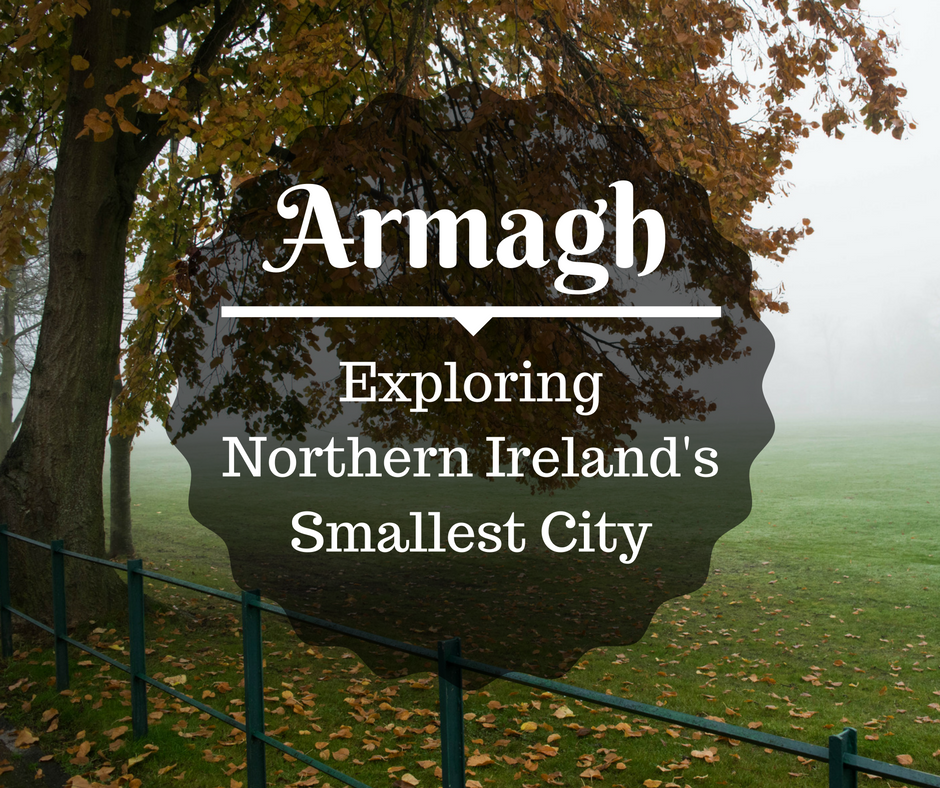 Arguably one of the most historic places on the Emerald Isle and the sixth smallest city in the United Kingdom, Armagh was long considered the ecclesiastical centre of Ireland. Aside from its Christian historic past, dating back to Saint Patrick establishing his principal church there in the mid-5th century, Armagh boasts a rich history with a Georgian influence still very much visible to this day.

Every November, the city celebrates these roots with Georgian Day and it’s for this reason that cep99 has hosted the Georgian Day geocaching event in her home county for the past three years. Now living in Belfast, I was in a better position to attend and took the opportunity to explore the city.

The event was held beside Navan Fort, just outside the city and I left a relatively clear-sky Belfast and set off down the M1 towards Armagh with plenty of time to spare. What I didn’t realise was that a cloak of fog was hanging over county Armagh and visibility was poor. My first thought was that my photos would be ruined but in fact, it turned out quite well with the mist giving the city an air of mystery.

Navan Fort is an ancient earthwork structure believed to have been an area of particular importance for high kings dating back to 2,500 years ago. It resembles Newgrange in its appearance, albeit on a somewhat smaller scale. Although the name ‘fort’ suggests it was defensive, historians believe it was more likely a symbolic site.

The fog meant that we couldn’t get much of a view of the fort itself, nor could we enjoy the great views to the city centre enjoyed on a clear day, but it didn’t stop us from sweeping up the caches dotted around the area.

The Navan Centre houses an exhibition, audio visual show, discovery room and a coffee shop, so there are plenty of facilities to keep you busy.

It was soon time for the event, which featured a delicious trackable cake and a draw for a Christmas geocoin. I never win such raffles so I wasn’t really paying attention; imagine my surprise to hear my name being called out! I was delighted, until I realised there was a catch – the person who won had to take home a trackable crate. Definitely the largest TB I’ve ever had in my possession, even the dog was slightly bemused when I brought it home.

Celebrating the city’s 18th century roots, the Georgian Day celebrations have been running in Armagh for several years. There were many people in costume milling around, stalls selling various handmade wares and food, as well as a beautiful carousel and helter skelter.

The atmosphere was electric and the city packed, despite the dismal weather. The general attitude was, “at least it’s not raining!”

In 2010, 22 tiny angels and gargoyles were installed around the city as part of a major urban regeneration. The miniature figures are the work of Cork-based German sculptor Holger Christian Lönze.

Much like the cats that we spotted in York, the gargoyles and angels are best found by surprise, or on an angel and gargoyle hunt, though there are some geocaches highlighting a few, in case you’re having trouble spotting the pocket-sized creatures.

A City of Two Cathedrals

For such a small city (with a population of less than 15,000), Armagh boasts two cathedrals. Both are confusingly called St. Patrick’s – well what else could you call a cathedral in the very place where Saint Patrick himself established his principal church? Both are the respective seats of the Archbishops of Ireland in the Church of Ireland and Roman Catholic churches, carrying on the city’s tradition of being the ecclesiastical centre of Ireland.

St. Patrick’s COI Cathedral dates back to the construction of a stone church on Willow Hill by Saint Patrick himself in 445. The church has been destroyed and reconstructed no less than seventeen times.

Brian Boru, perhaps the most famous of Ireland’s High Kings, is believed to be buried in the adjacent cemetery. Not all that surprising, given the importance of the nearby Navan Fort (Eamhain Mhacha) as the capital of Ulaidh.

Construction began on the Roman Catholic cathedral in the mid nineteenth century and was completed in phases until 1904. After the original St. Patrick’s was ceded to the Established Church following the Irish reformation, the public practice of Catholicism was all but extinguished and as a result there were few Catholic churches on the island at all.

It was not until Archbishop William Crolly was appointed to the See of Armagh in 1835 that a Catholic bishop returned to reside in the city and began making plans for a Catholic cathedral to be built.

While there is evidence of the city’s Georgian history in many of its facades, the epitome of Georgian elegance is the Mall, a picturesque green area lined by quintessential Georgian doorways.

Once the city’s racecourse, the area is now used for picnics and games, as well as being home to cricket grounds. There are various memorials and sculptures dotted around the area and it really is a lovely place to walk around.

You could easily spend days in Armagh and not experience all the city has to offer, which is quite amazing given its small size. Armagh has that most endearing quality of small cities: friendly locals and a great sense of community. The city is also teeming with geocaches, so it would be positively rude not to go back and turn all those boxes in to smiley faces!

What new places have you discovered thanks to geocaching? Let me know in the comments!