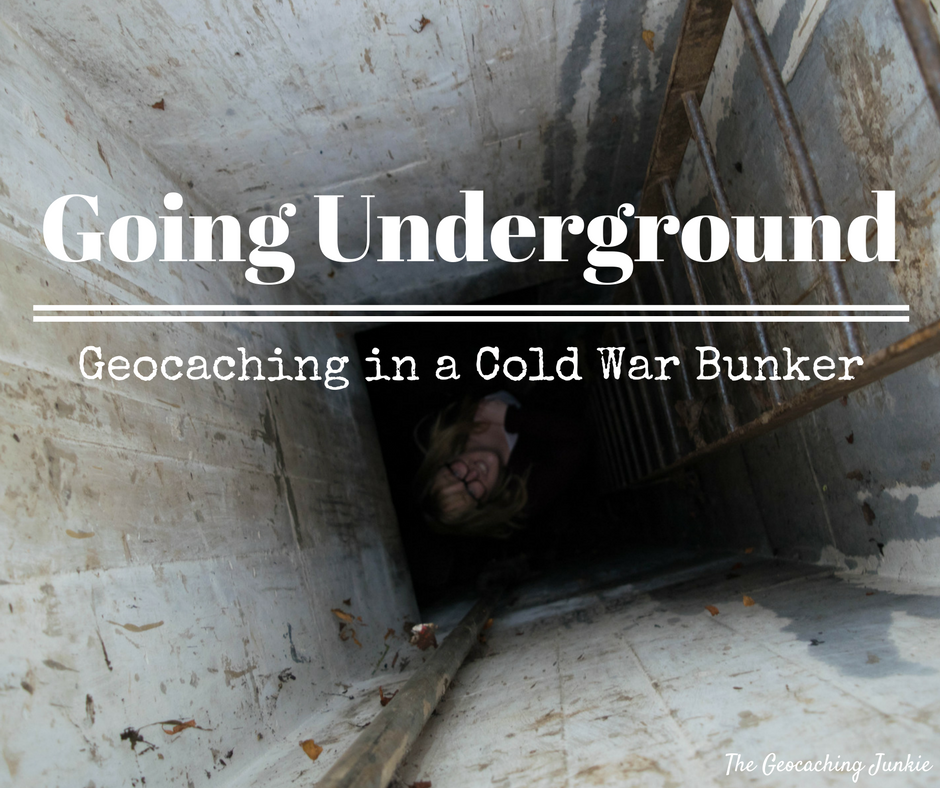 I’ve never met a geocache I didn’t like. Well, once I found a micro key hider with a spider in it but, other than that one, I am always happy to be out geocaching and to do that, you need geocaches! I always respect the effort that went in to hiding a cache so I could have something to look for (even if it has a spider in it). But every now and again, something really special comes along and I know it’s going to be a particularly memorable adventure.

Cold War Cache (GC32REK) had been on my radar for quite a while, as it’s repeatedly mentioned in various UK Geocaching groups on Facebook. Imagine my surprise when I decided to have a look exactly where it was and discover it’s relatively close to East Midlands Airport, where the muggle and I go to visit family several times a year.

We normally spend a few hours geocaching as soon as we arrive on an early morning flight, and when the usual question of ‘where will we go?’ came up, I knew straight away where I wanted to spend the morning: in a disused underground bunker! 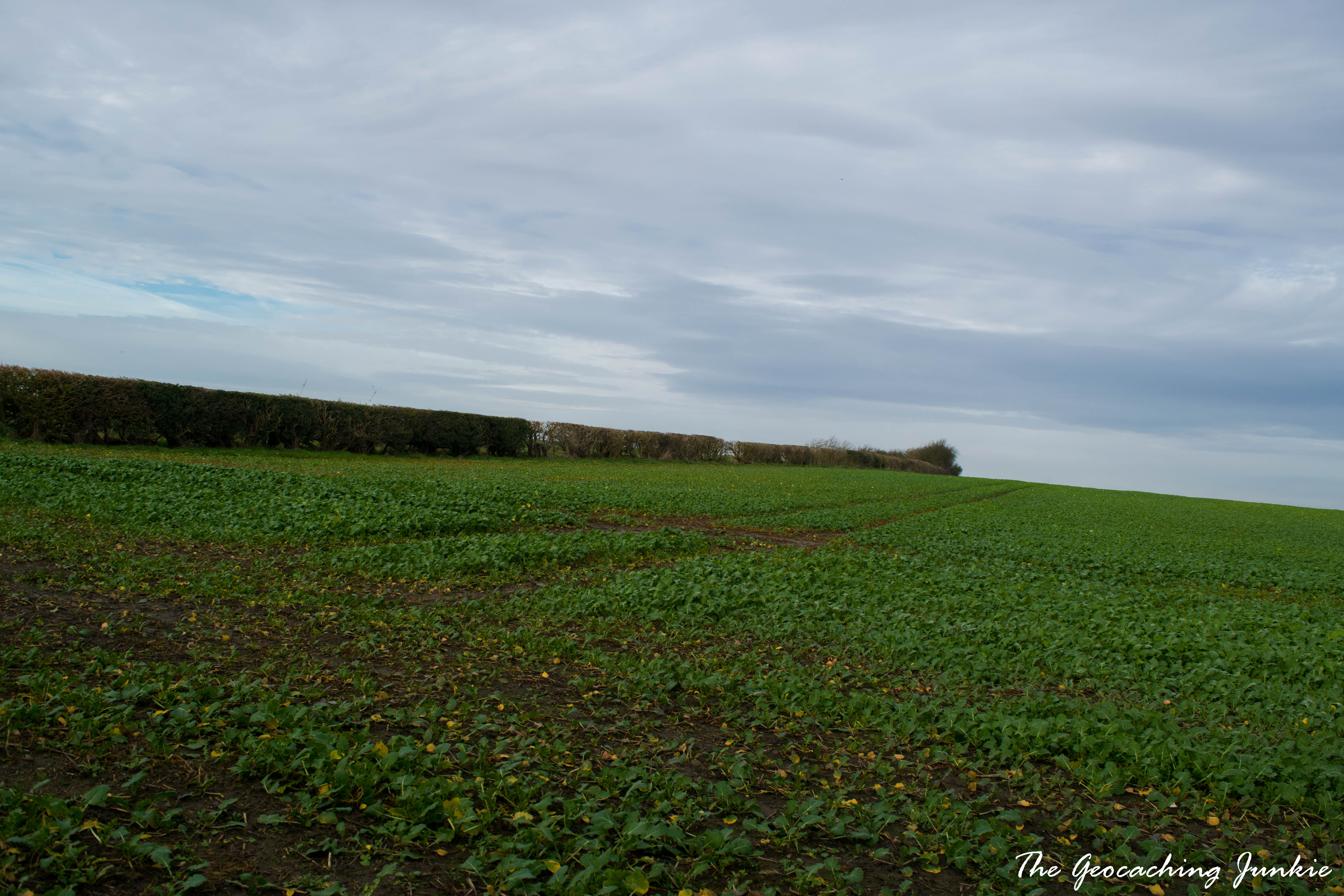 So why are these bunkers dotted around the UK and what were they used for? The bunkers were built during the Cold War and used as nuclear monitoring posts. They were manned by the largely voluntary Royal Observer Corps (ROC) and consisted of a monitoring room and a toilet/store room. Most were locked up when the ROC was disbanded in 1991 but a few seem to have been ‘forgotten’ and can still be accessed.

The post in Cotgrave, Nottinghamshire was opened in 1961 and closed seven years later, when almost half the posts were shut during a reorganisation of the ROC. It’s located on the edge of a farmer’s field.

It was dry when we arrived but the field was nevertheless quite mucky so my shoes were caked in mud by the time we arrived at GZ. The first order of business was to remove the lid. Once the muggle had done the honours, I peered in for a few minutes pondering how I got to the point in my life that I not only wasn’t scared to descend in to the darkness, but was actually excited to do it. 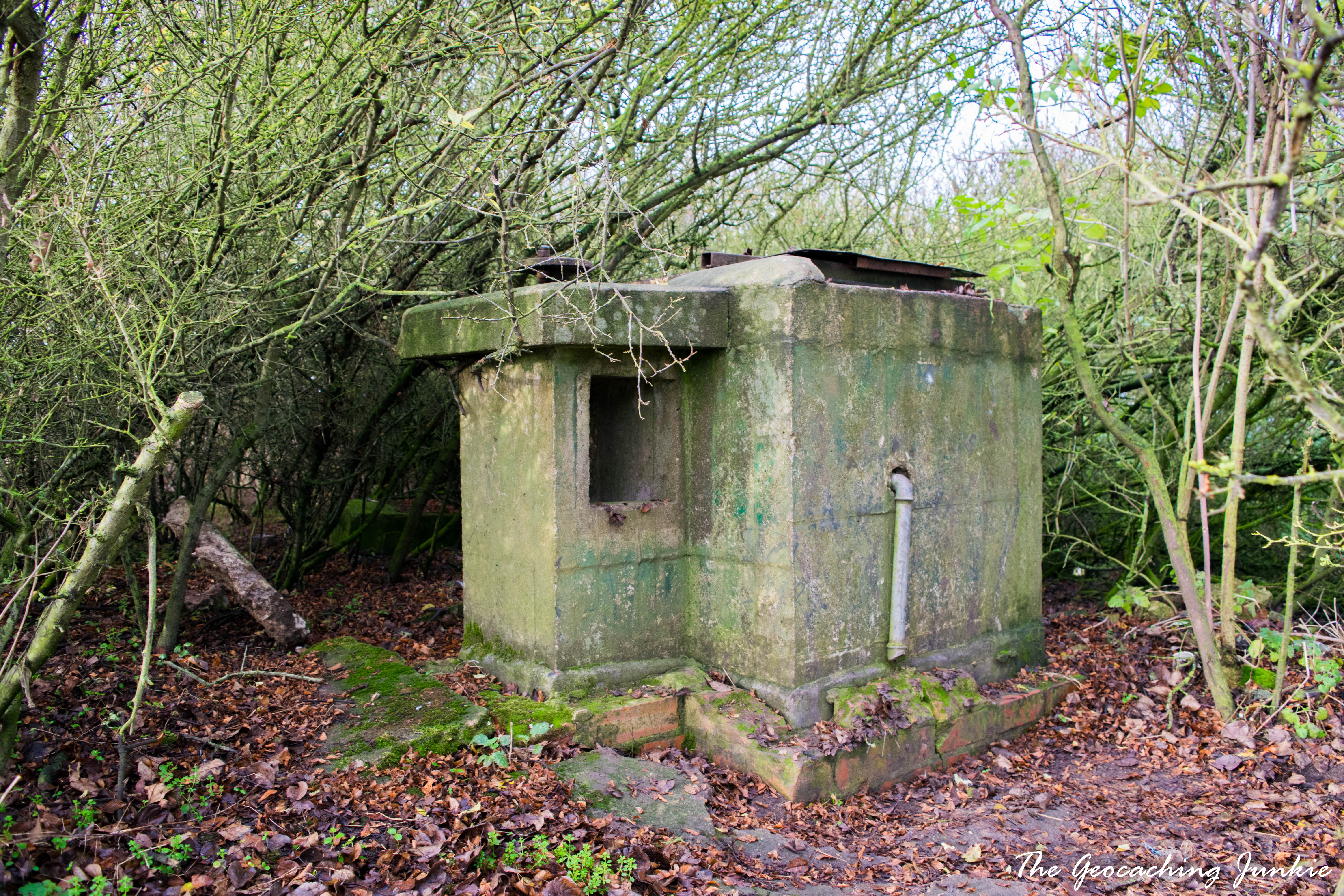 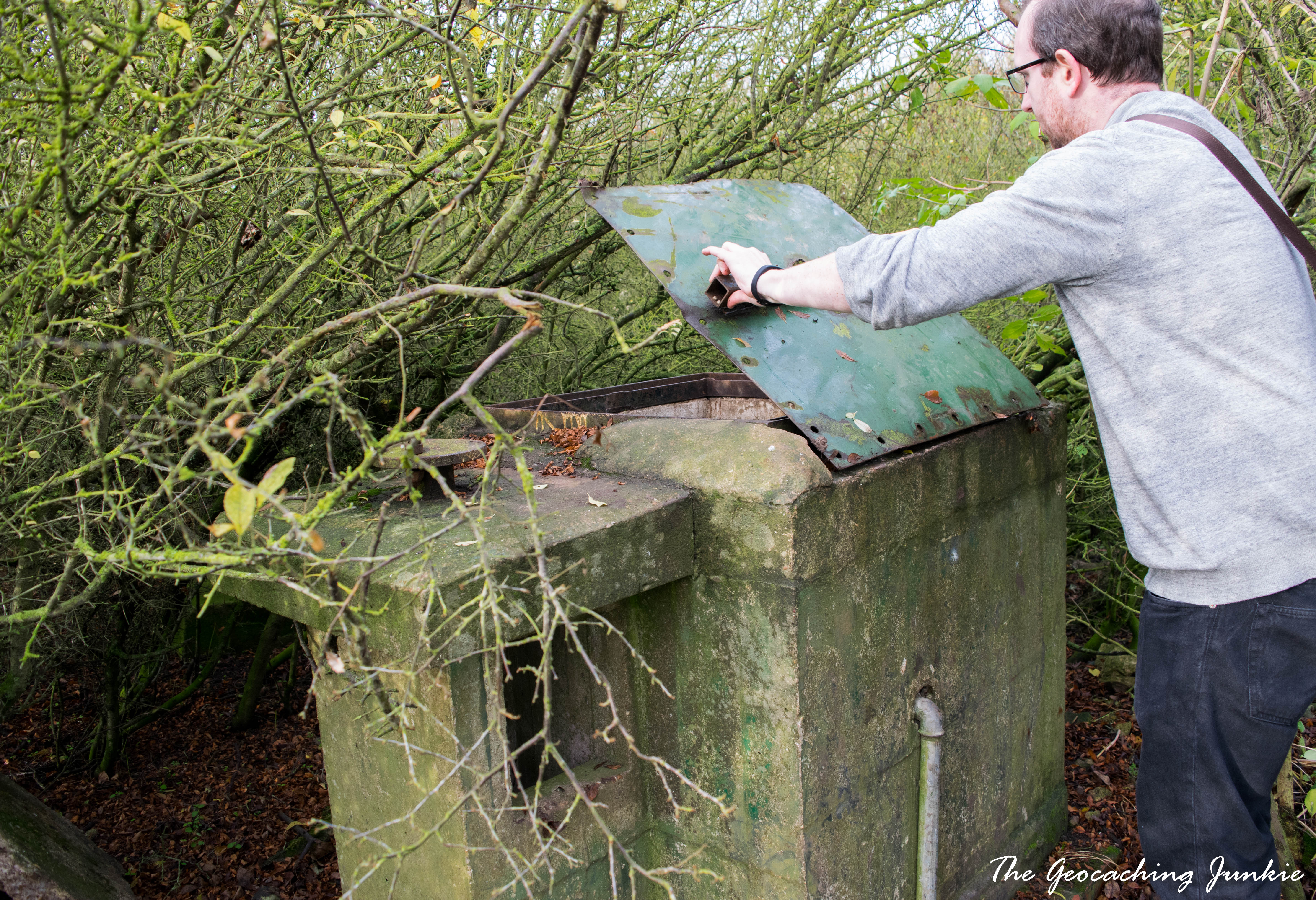 Lid-lifting and life-pondering over with, the trickiest part of the escapade was getting up on top of the concrete opening to start the ladder descent. After a few false starts, I was soon on the ladder and shakily making my way underground. If you compare the photos of me as I was starting out and when I re-emerged, I think it’s plain to see the contrast of nerves and relief! 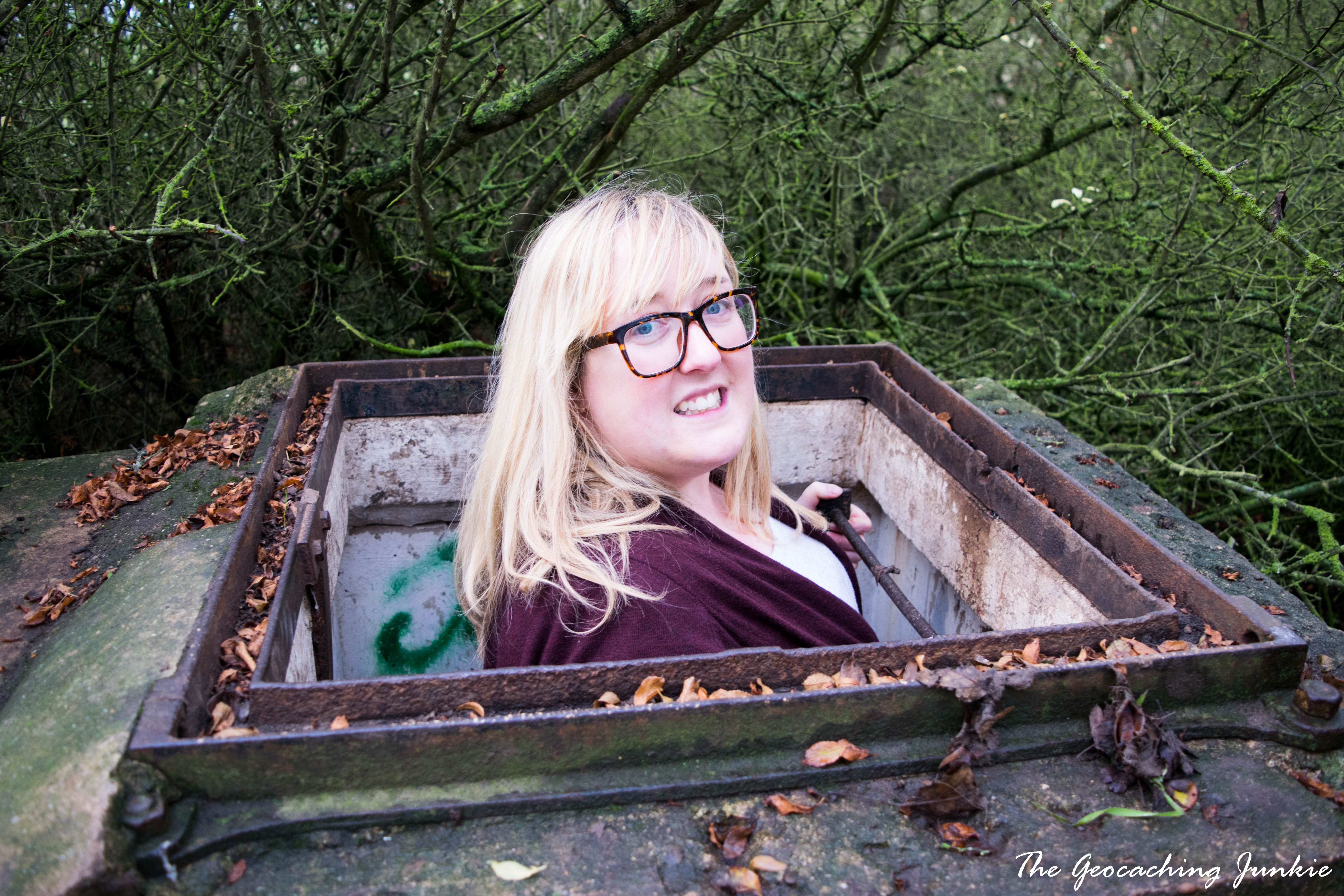 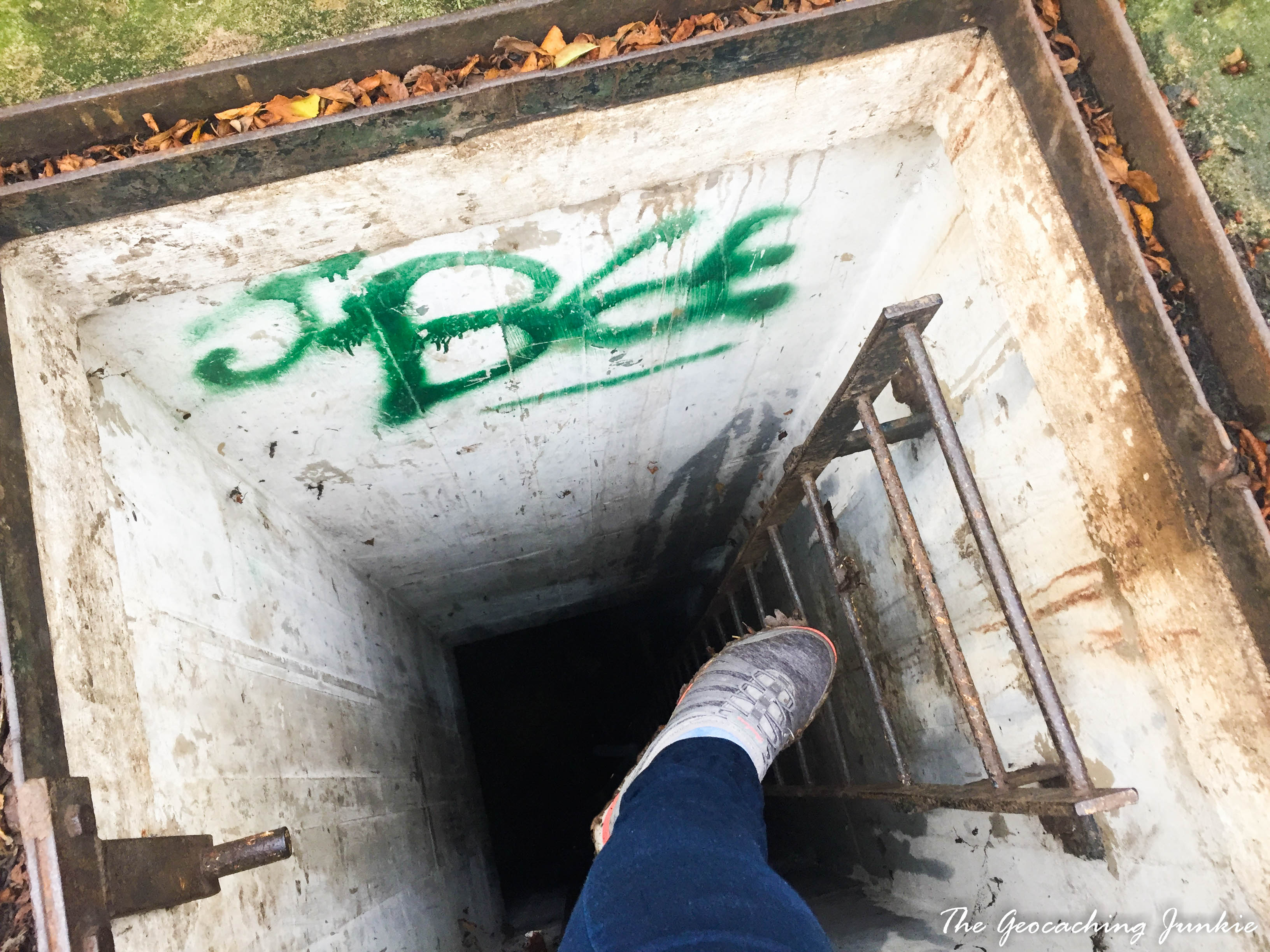 With trembling hands, I made my down the 14-feet shaft in to the unknown below. I arrived and had a look around the small space. Okay, this is not so bad. It was somewhat spooky but knowing that the muggle was up above in case of emergency (that may or may not have involved spiders), and the fact that I could still see some daylight coming down from above, I wasn’t as scared as I thought I might have been. 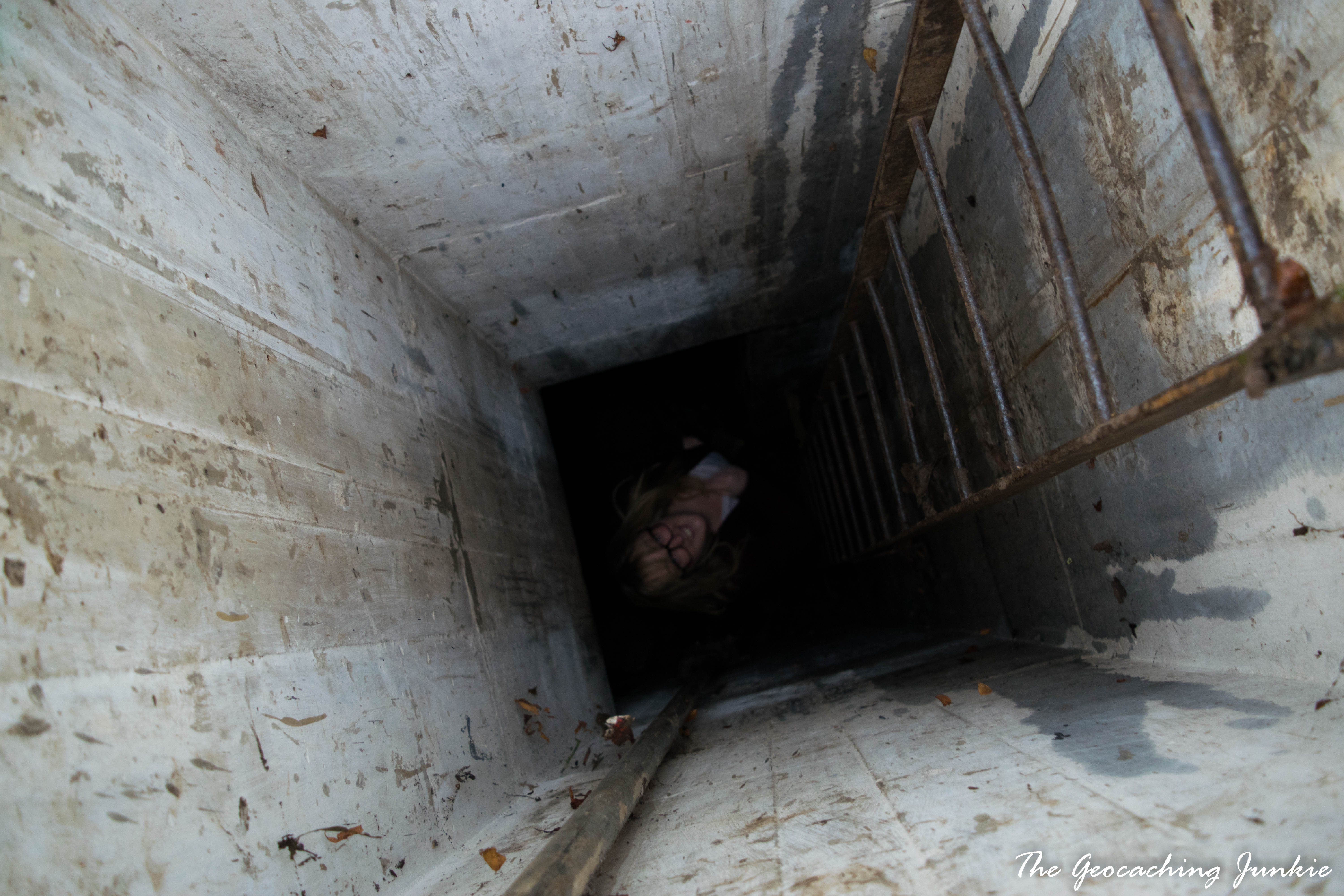 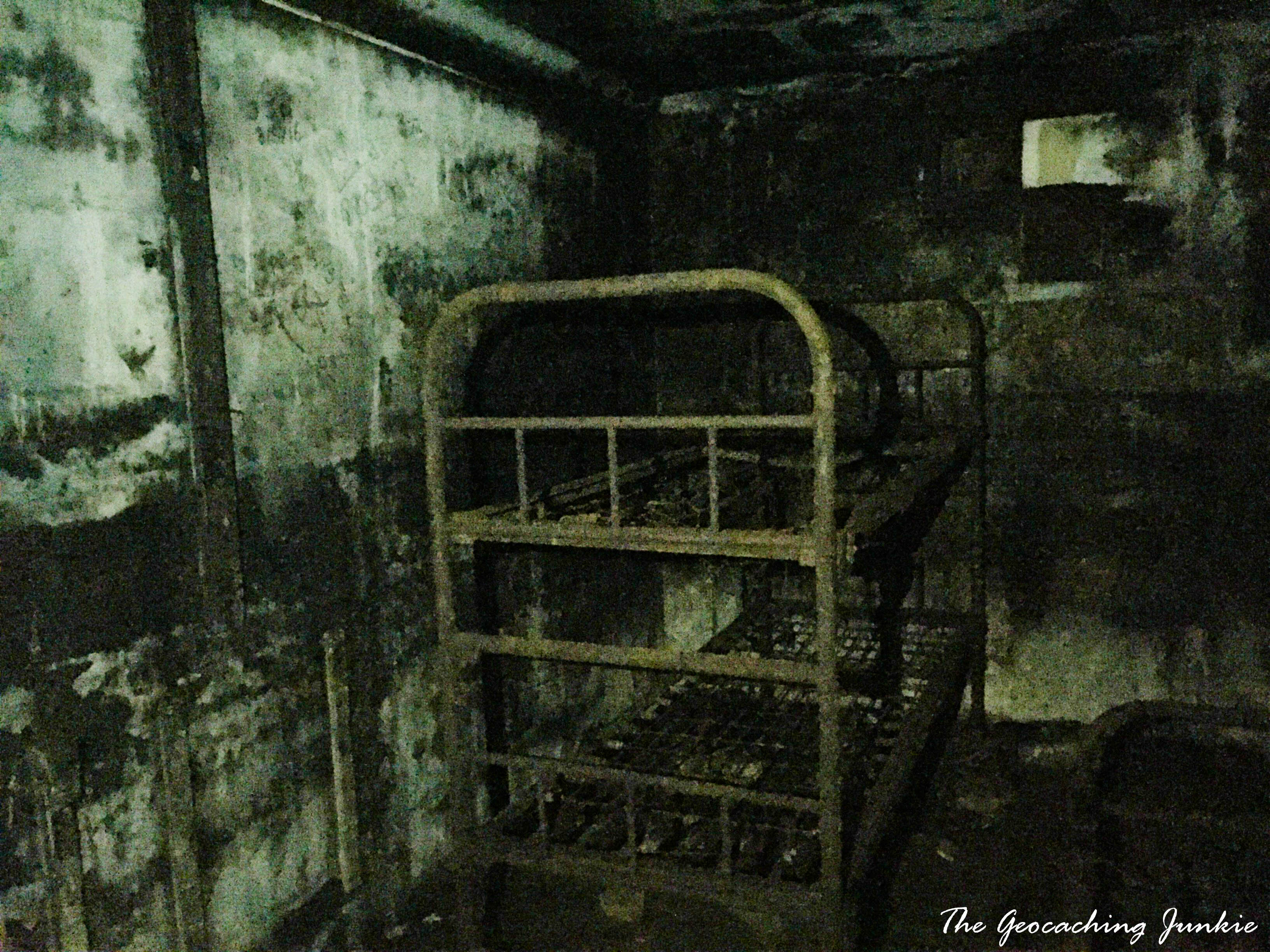 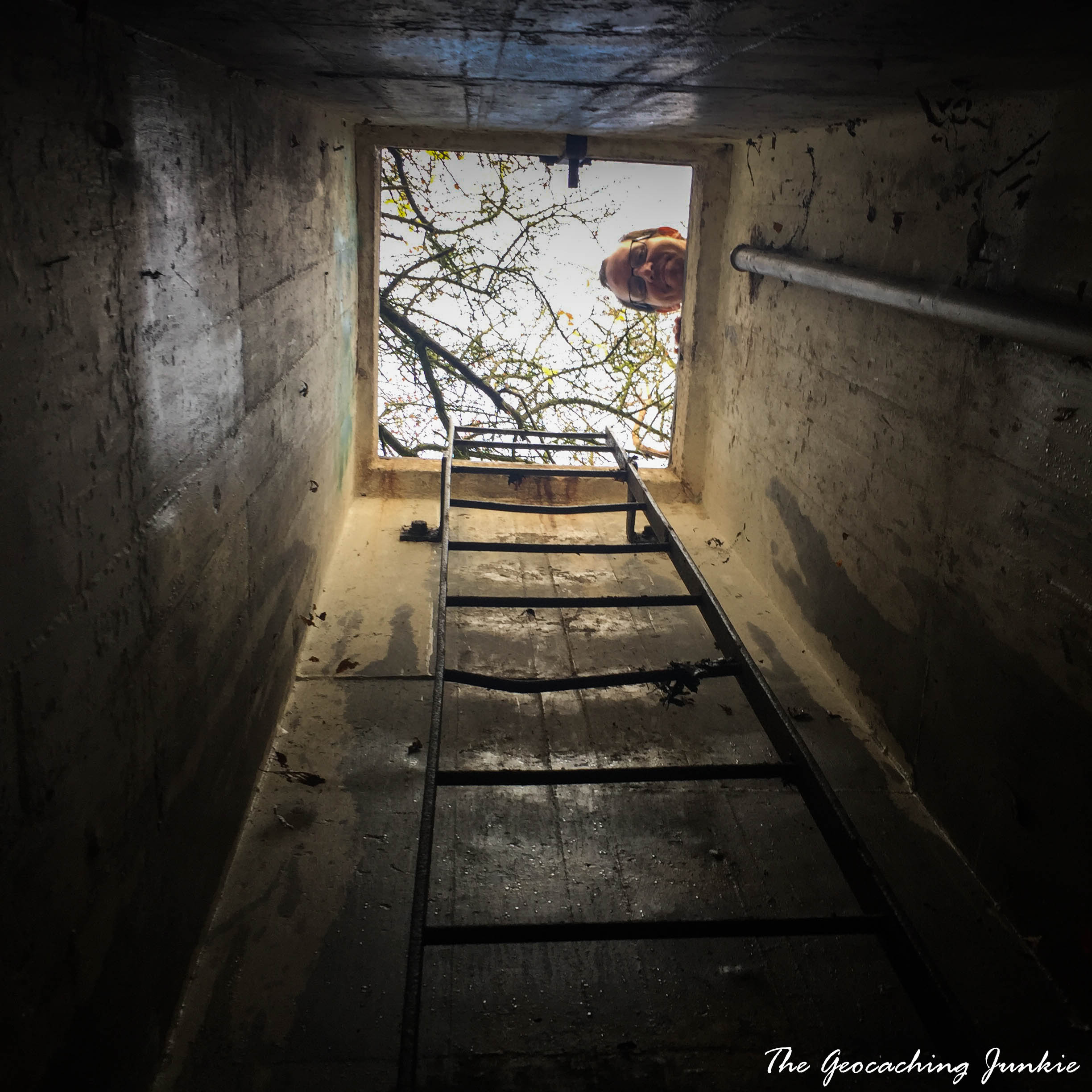 As it happened, I imagined I would just find the cache, sign, replace and get the hell out of there within two minutes but it was not to be. In fact, I am now much acquainted with the entire bunker after struggling to find the cache and going over it with a fine tooth comb! I may have given up if I had come across any 8 legged freaks but thankfully, I didn’t, so I could have a thorough search. I eventually came up with the goods, and I’m sure the sigh of relief could be heard from the neighbouring village. 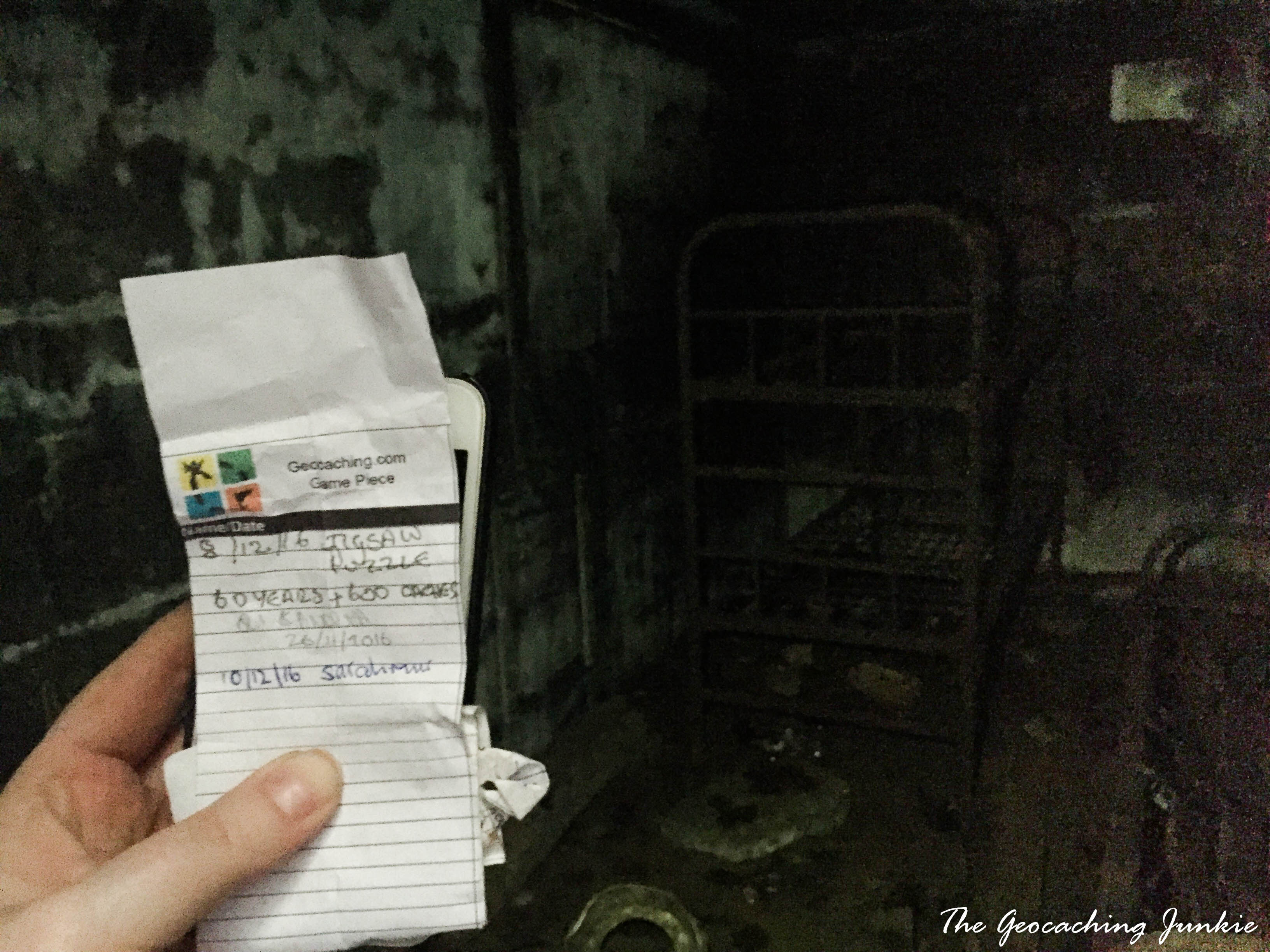 Job done, it was time for the climb back up and it was mercifully not too strenuous – perhaps I was spurred on by adrenaline! I emerged above ground triumphant and feeling elated – isn’t it funny how geocachers get their thrills?! 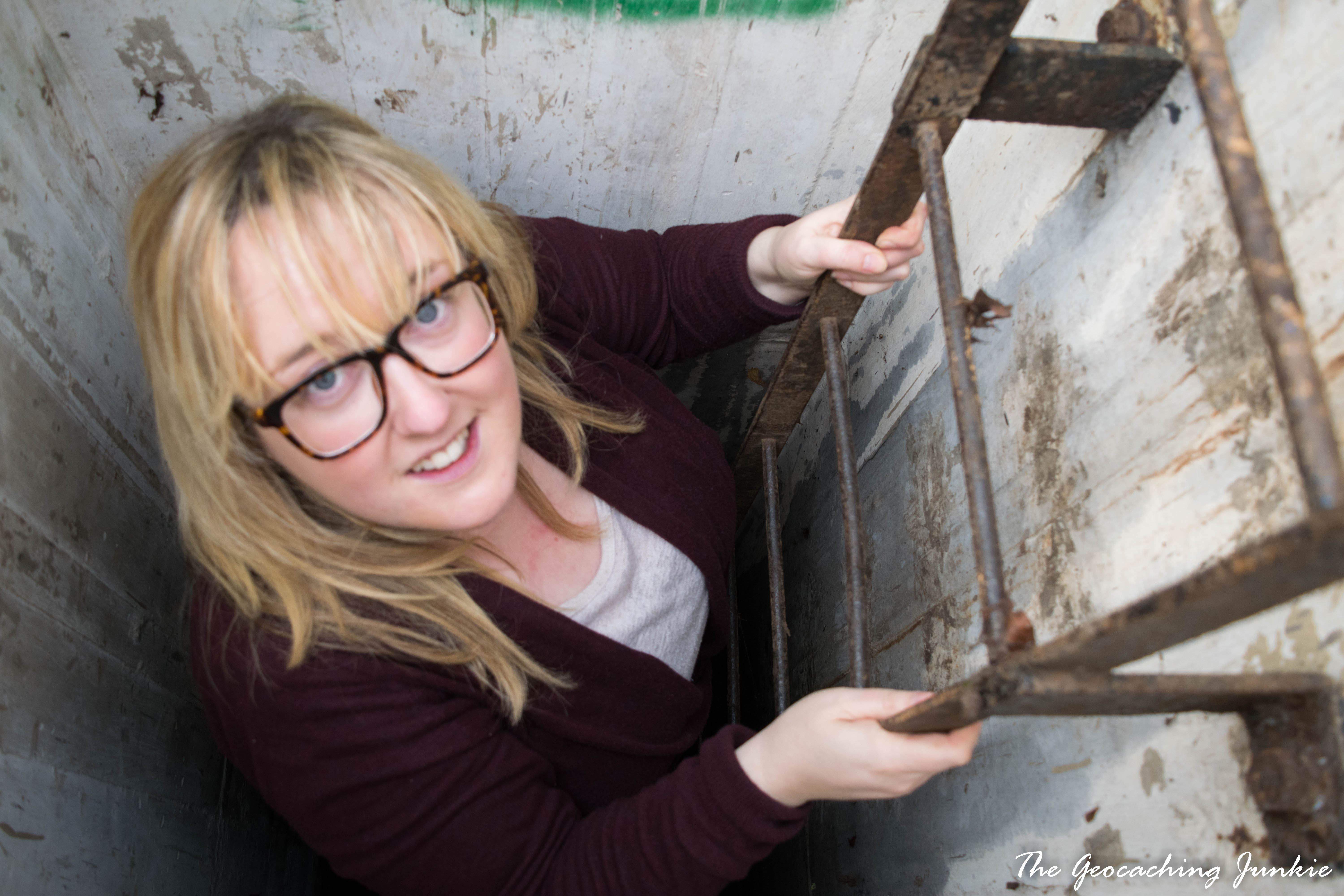 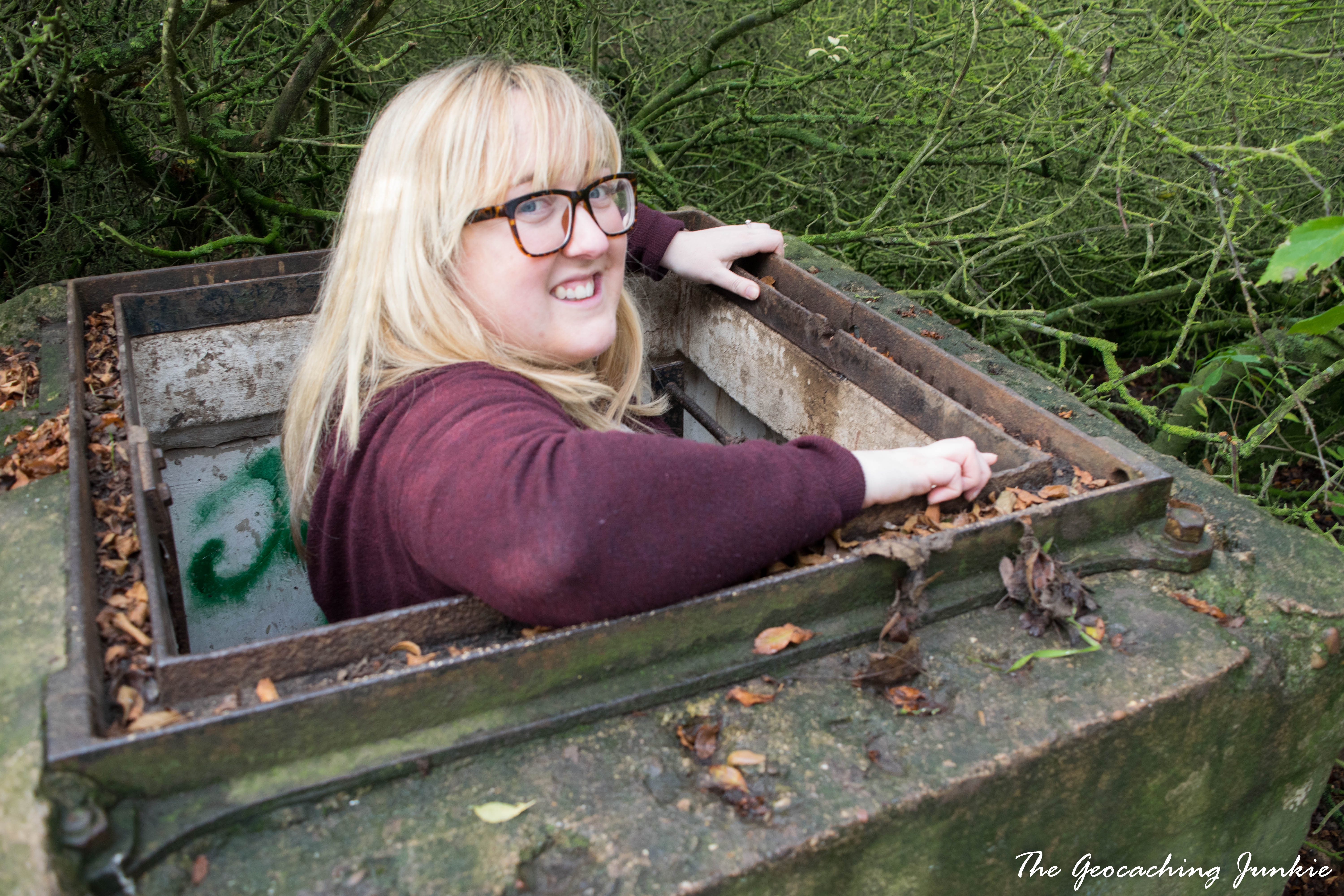 It was an amazing experience and I’m shocked how much I enjoyed it. It’s something I never would have done before I was a geocacher, but I’m so glad I can say I’ve done it now! What crazy things have you done, that you never would have even considered before you were a geocacher? Let me know in the comments!

Listen as I chat to Sonny from Podcacher about my Geocaching Naughty or Nice List, the Cold War Cache and lots of geocaching goodness!

5 thoughts on “Going Underground: Geocaching in a Cold War Bunker | The Geocaching Junkie”