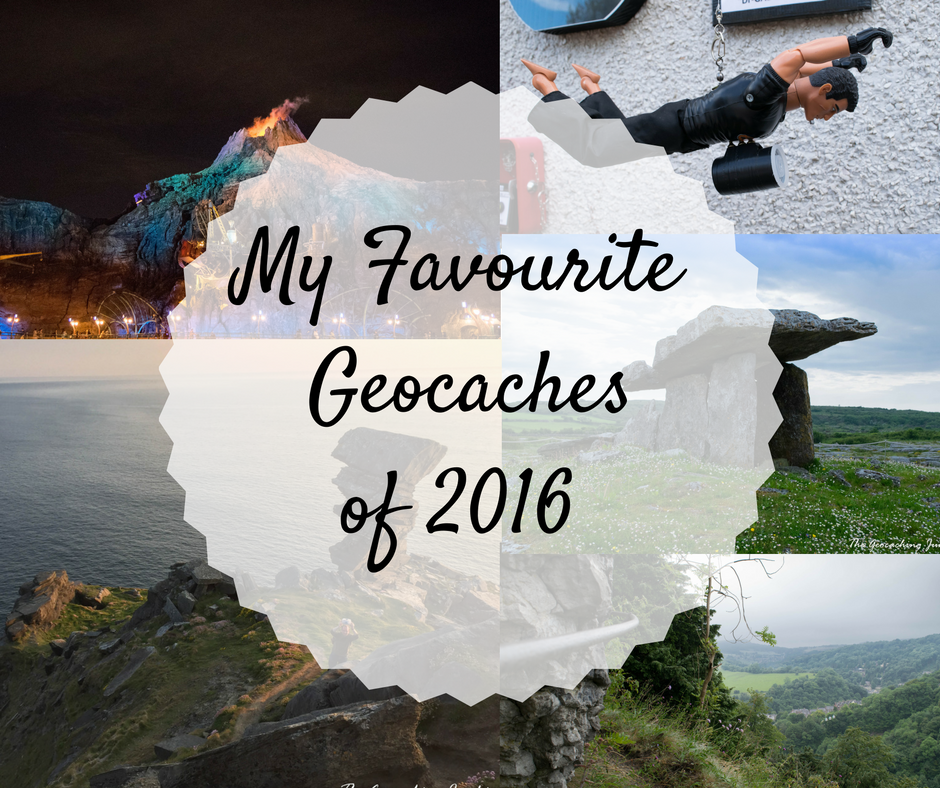 Late December is traditionally a time for looking back at the year that’s passed and reflecting on the highs and lows. I started thinking about what memorable geocaches I’ve found this year, but I have to admit, my memory is short. It was only when I started trawling through my over 800 finds for the year, that I remembered some really stand-out adventures.

So what makes a geocache a favourite geocache? For me, there can be various criteria: a wow location, a well-constructed gadget cache, a puzzle that drove me crazy until I cracked it, a particularly challenging challenge cache, or something special that happened on the journey to the cache. It was difficult to choose just a few but I’ve managed to narrow it down to ten finds – all very different and noteworthy for various reasons – and listed in no particular order.

As if I didn’t get enough caching goodness between three mega events in one week, I also did this T5 EarthCache when visiting family in Derbyshire in the intervening days. I had this EC on my radar for a while, and was delighted to finally have the opportunity to get there.

The cache is at Giddy Edge, a perilous walk created for tourists to Matlock Bath in the mid nineteenth century. An iron handrail is the only ‘safety feature’ to ensure walkers didn’t fall to their death in to the gorge below, and indeed, that handrail and a few warning signs are all that are in place to keep people ‘safe’.

This was definitely an adrenaline-fueled walk, although it’s quite short and there’s a one way system signposted. One small stumble and you could find yourself hurtling down the vertical cliff – undoubtedly a cache for thrill seekers!

This cache was a must-do when I was in Wales for the UK Mega back in August and it did not disappoint! A very clever and well-constructed gadget cache and a worthy winner of the NGAs Best Cache award.

Many thanks to the CO for permission to post this video on my blog, for those who may never get the opportunity to find this gem!

I haven’t finished blogging about our Japan adventures yet and there is a post about Tokyo Disney Sea still to come, but I couldn’t make a list of my favourite caches of 2016 without including this amazing EarthCache.

While Mount Prometheus, located in the Disney Sea theme park in Tokyo, may not be a real volcano, it was designed to be so realistic that Groundspeak and the local reviewers have allowed an EC to be based on it.

This cache is a definite contender for my favourite find of the year. The landscape is like no other I have seen anywhere else in the world, and set against a clear blue sky, we felt we were somewhere decidedly more exotic than the west coast of Ireland.

The terrain is set as 4 and yes, it’s definitely a bit scary: sheer drops on both sides and a bit of scrambling down rocks, as well as some holes in the ground that you could easily slip all the way through if you’re not careful.

Getting to GZ was an adrenaline rush, and combined with the amazing location, a view of the Cliffs of Moher that not many have seen them and the fact that there was not another soul around as we enjoyed the scenery and the sunset, this cache is firmly in the top three most memorable caches of 2016 for me.

Easily one of the best caches I’ve done this year and unlike any other I’ve ever found, Cold War Cache had to be featured on this list!

You can read about my adventures geocaching underground here and listen to me chat about it with Sonny from Podcacher on show 578 of the Podcacher podcast.

This cache is memorable because it was such a fun challenge to complete and I was so delighted to finally get it finished. Before geocaching, I had only been to a small fraction of Ireland’s 32 counties but now I can say I’ve been to them all and thanks to geocaching, have probably seen many county highlights too.

It wasn’t always an easy task either, as some counties have very few geocaches, such as Longford, which currently has 7 active caches – I think it had even less when I was there. I finished the challenge when we visited Clare in June and I may have saved the best for last – what an amazing county with so much to offer visitors and geocachers alike! Just look at Inisheer beach – hard to believe this is in Ireland!

A true example of when finding a cache becomes a real adventure, The Lazarus Pit was ridiculous and fun in equal measure! For some reason, we thought wellies would be enough to keep us dry but we were soon thigh high in sea water.

We managed to find the cache quite quickly, to the disappointment of TucKids, who insisted we play around in the pit for a bit longer – it was terrific fun and not an experience I’ll be forgetting any time soon!

This was a cache at an iconic location – the Lion’s Mound at the Battle of Waterloo site. It was the last day of a weekend in Bruges to attend the mega and since we were headed to Waterloo, I decided it was an absolute must to listen to eponymous ABBA song en route!

I think Waterloo is one of those places I probably never would have visited if it weren’t for geocaching, and isn’t that what it’s all about?

Another geocaching-related revelation – dolmens. I presume I learned about these ancient portal tombs in school but damned if I can remember a thing about them. Thanks to geocaching, I’ve now seen quite a few but Poulnabrone Dolmen in County Clare is by far the most impressive.

Set in the heart of the Burren, the impressive tomb boasts a 12 foot capstone, and excavations in the 1980s found that 33 people were buried beneath it. There were many highlights of our trip to Clare, and this was definitely up there.

In February, we spent Valentine’s weekend in Barcelona and enjoyed exploring Gaudi’s city and doing a few caches along the way too. On Sunday, we took the Tramvia Blau and the funicular to Tibidabo, a mountain towering over Barcelona. I had done my research before we went and picked out this cache to do because it was Valentine’s weekend and I even brought a love lock to add to the many already hanging there, as a memento of our trip.

With our lock added and the cache found, we decided to get even higher and go to the very top of Sagrat Cor Church. What a treat that was! I’m not generally scared of heights but this was knee-knockingly high – right up there at the feet of the statue!

To my surprise, the muggle presented me with a fake rock as I was enjoying the view and inside was a logbook with a very important question – of course, I said yes! We celebrated in style at a Barcelona football match later that evening, as you do.

Geocaching has gifted me so many fantastic memories this year. I can’t wait to see what 2017 has in store!

What are your geocaching highlights and favourite caches of 2016 ? Let me know in the comments!