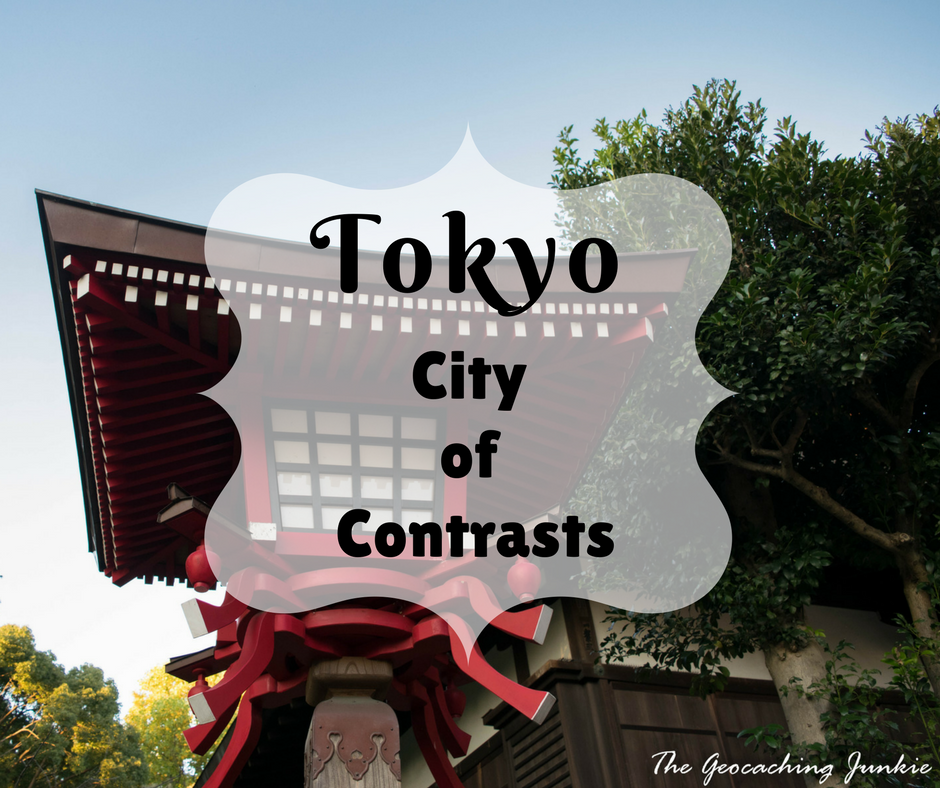 In a previous post, I wrote about modern Tokyo and all the delights of an Eastern city fascinated with Western culture. While I thoroughly enjoyed the sometimes futuristic elements of new Tokyo, it was the stark contrast of the ancient sitting side-by-side with the contemporary that really captured my heart.

Located a stone’s throw from the teenage fashion hot spot of Harajuku, the Meiji Shrine sits in the middle of an evergreen forest; a veritable oasis in the midst of the hustle and bustle of Tokyo. The peaceful paths and immense trees make it feel like you’re stepping into a different world.

The Shinto shrine is dedicated to the deified spirits of the Emperor Meiji and his wife, Empress Shōken. Construction was started in 1915, three years after the Emperor’s death, and was built mostly with Japanese cypress trees and copper. Unfortunately, the original shrine was decimated during World War II and the present structure was completed in 1958. 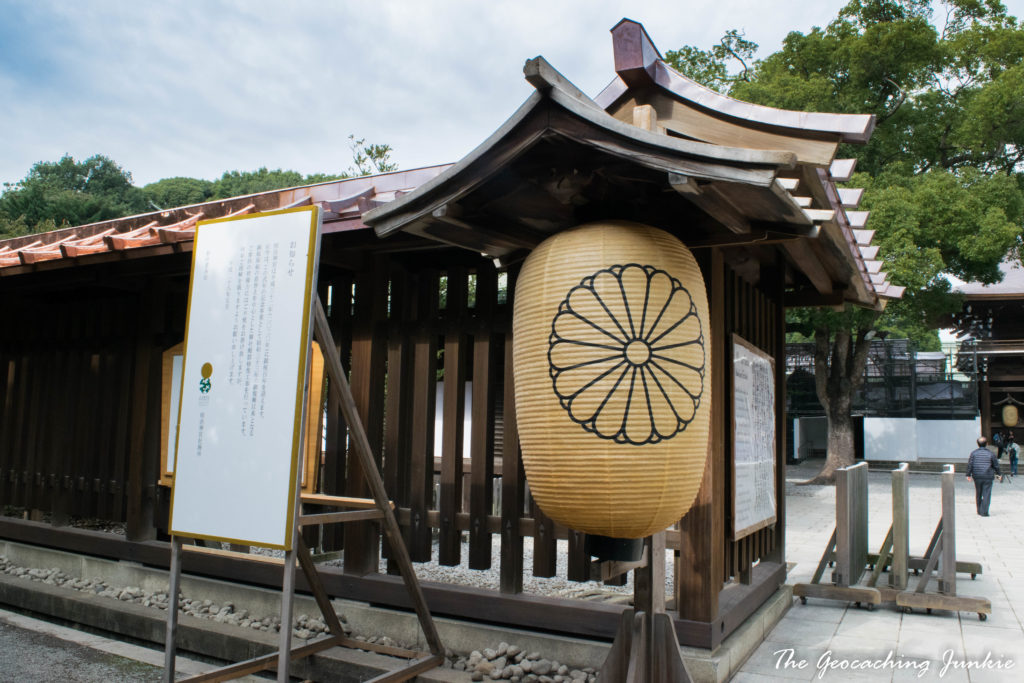 The approach to the shrine is beautiful and we were treated to a display of bonsai trees, I assume for some sort of festival or celebration. The creations were amazing and some were very imaginative! There is a vast collection of Sake barrels on show on the way to the main shrine. The colourful barrels are offered to the deities every year by sake brewers. 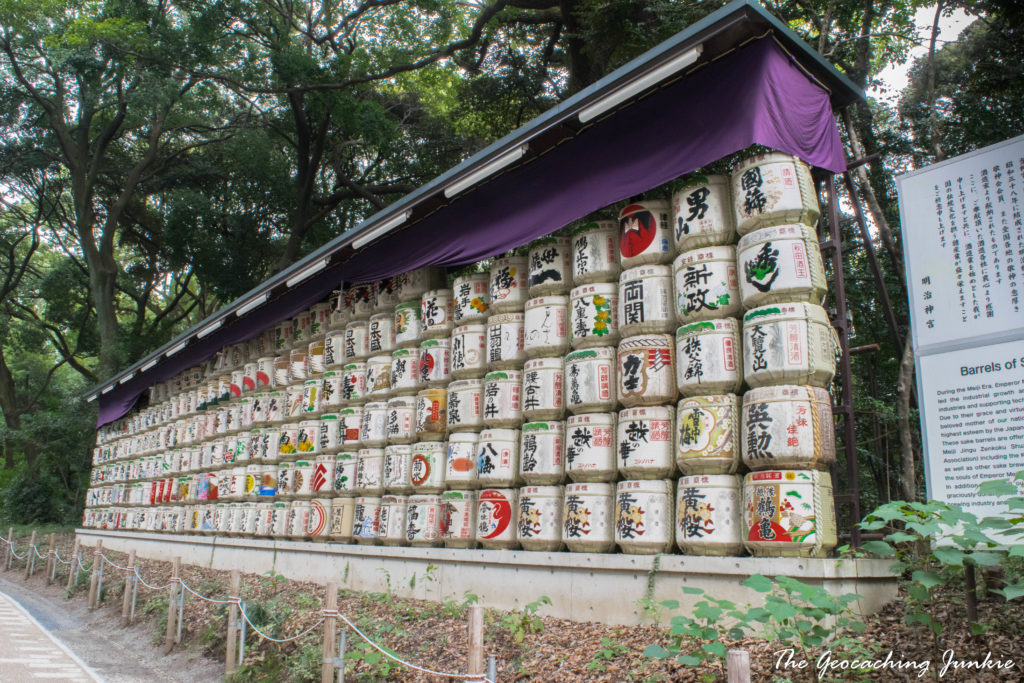 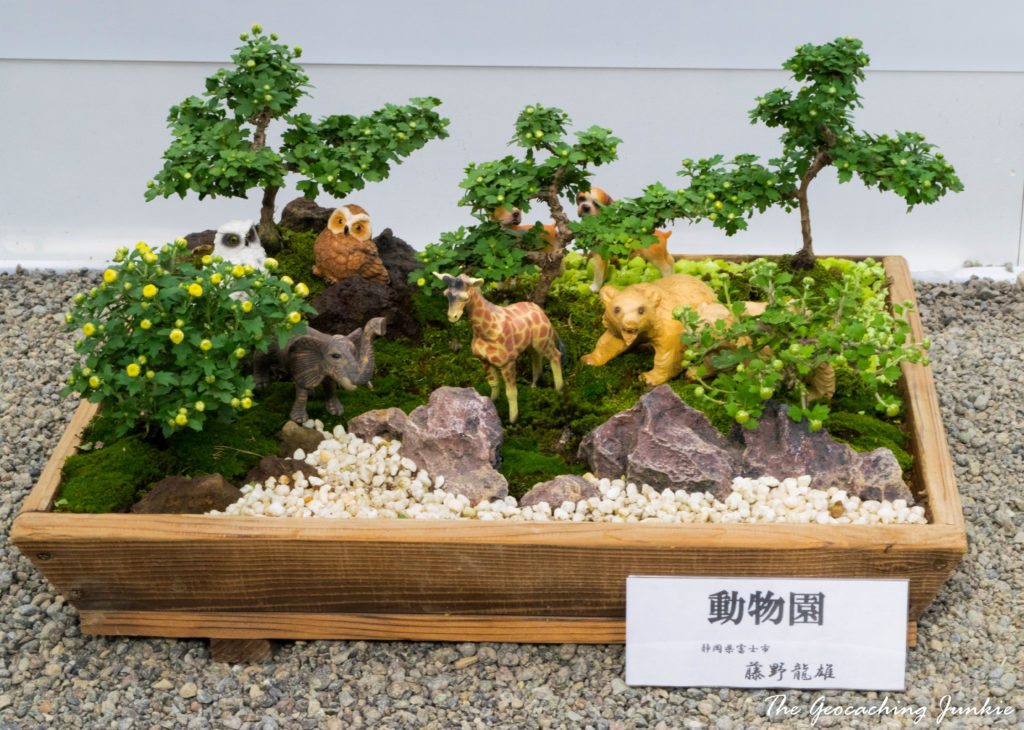 The shrine itself is very tranquil compared to other shrines and temples we visited. It felt more like being in the middle of the countryside, rather than in the centre of Tokyo. The decoration is not flashy, but it’s rather beautiful in its simplicity. For a break from the maddening crowds, an hour or more spent at Tokyo’s most famous shrine is perfect to clear your head and relax.

Home to the Japanese Emperor and his family, the Imperial Palace sprawls over 3 km² on the site of the old Edo Castle. We visited the East Gardens* for a few hours and enjoyed the walk around the vast gardens in the middle of the city.

The grounds are surrounded by a moat, which was covered in a luminous green algae when we were there. It didn’t stop huge koi from thriving and swans from cutting through it as they glided around the water.

The East Gardens covers 52 acres and houses a variety of gardens and landscapes, including an intriguing display of 260 trees donated by each prefecture in Japan, and the Ninomaru Garden, home to a beautiful koi pond. 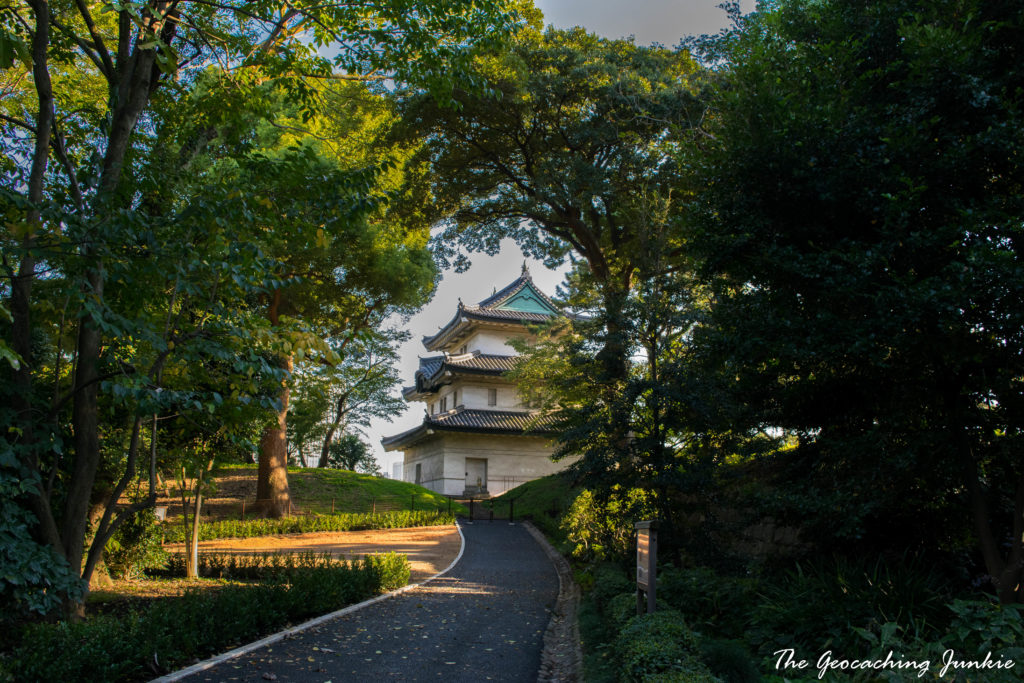 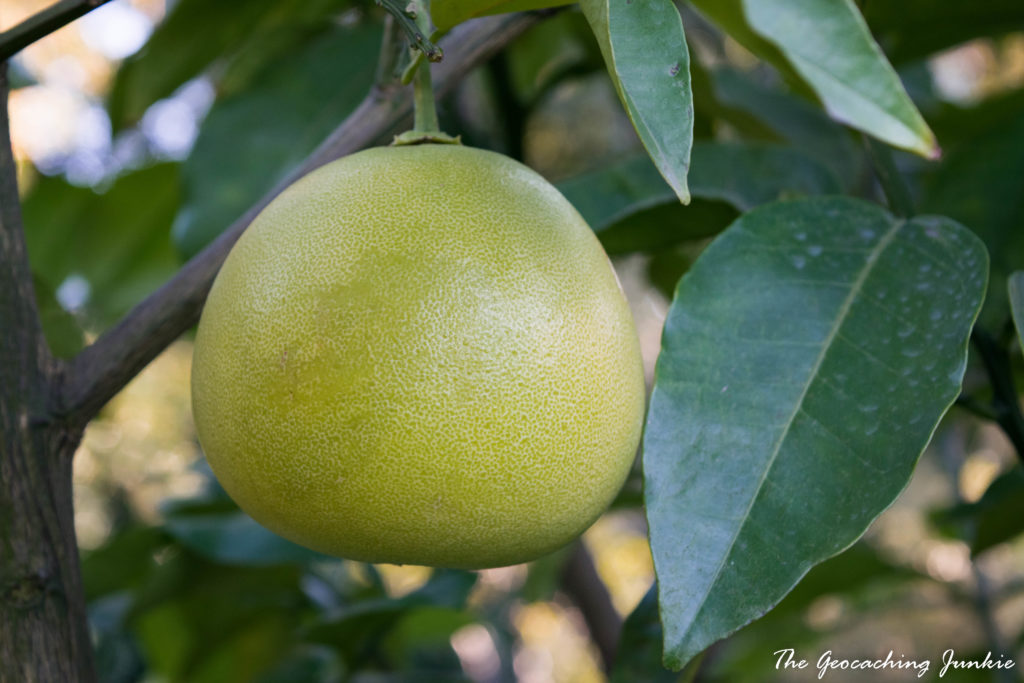 A five minute walk from the Ote-mon Gate, the entrance/exit to the East Gardens, is the Wadakura Fountain Park, which was built in 1961 to commemorate the wedding of Emperor Akihito and Empress Michiko and later reconstructed in 1995 with the theme ‘Continuity and New Development.’

We visited the fountain park at twilight and it was really magical; I think I enjoyed this more than the Imperial Palace East Gardens! The towering skyscrapers with their windows lit up was the perfect backdrop.

The way of a wind, GC3DMEQ

*Note that the Imperial Palace East Gardens are closed on Mondays and Fridays!!

One of the most popular places in Tokyo for tourists to converge, Sensō-ji originally dates back to 645 AD, making it the oldest temple in the city.

After emerging from Asakusa metro station, the first sight to greet you is the impressive Kaminarimon, or “Thunder Gate,” featuring an imposing bright red and black paper lantern, which many of those passing underneath reached up to touch. It was only after returning home and perusing my photos that I spotted a familiar symbol on the lantern base (see pic below). The swastika has long been used as a symbol of Buddhism and Japanese culture and a 2016 proposal to replace it with a three-storey pagoda on tourist maps ahead of the 2020 Olympics has been met with backlash.

Before passing through the gate, we set about searching for the cache, Asakusa Kaminarimon, which is the most favourited cache in Japan! It is very cleverly hidden in this busy area, with gorgeous swag inside, presumably made by the CO and bearing the cache name, as a fabulous memento of the find.

Nakamise-Dori, the narrow street leading from the Kaminarimon to the temple, is lined with shops, mostly selling souvenirs and good luck charms. A little further away and to the right of the temple, are lines of food vendors. The whole area was thronged with tourists, and the combination of a cacophony of various languages being spoken, the bright trinkets for sale and the aromas of everything from noodles to crab kebabs is quite the feast for the senses!

A temple should be a place of quiet contemplation and reflection, but the other areas of Sensō-ji felt very far from anything resembling an oasis of serenity. Perhaps one has to go to the inner sanctum to find any peace. Even so, it was an experience not to be missed, if just for the sheer drama of the huge lantern at the gate and the sea of tourists that carried us to the temple.

On our last day in Tokyo, we had lots left that we wanted to squeeze in to our trip, including a visit to Ueno Park. The park was opened to the public in 1873 and were originally part of Kaneiji Temple. The whole area is huge and houses two temples, a temple hall, a shrine, multiple museums and Ueno Zoo.

We didn’t have much time to explore, but we did pay a visit to Kiyomizu Kannon Temple and watched some dancers for a little while.

The National Museum was already closed but there was a nearby display of ornate paper lanterns and some dancing fountains to keep us amused. In the spring, Ueno Park is a popular place to see the cherry blossom in bloom.

There are lots of geocaches in the park but we only looked for one: 2013春～夏コレクション#4 / UENO park “Tokyo National Museum. It took us quite a while to find the hide – it’s really clever! We will have plenty of caches to look for the next time we visit Tokyo.

The day before we left Tokyo, I hosted an event just inside the gate of the Zōjō-ji temple. This was easily the smallest event I have hosted to date with just two locals turning up for some geochat and TB exchange. It was so lovely to meet Udomomo and ao_zeal, especially since Udomomo‘s challenge cache was my first find in Japan!

Dating back to the 14th century, Zōjō-ji moved to its current location in 1598, but was later destroyed during World War II and rebuilt. The main entrance gate, Sangedatsumon, has however survived war, earthquakes and fires and dates from 1622. Though Zōjō-ji may be less garish in its adornments, if you’re seeking a temple to offer you peace and tranquillity, you will definitely find it here, away from the maddening crowds at Sensō-ji.

Zōjō-ji is one of those places in Tokyo where old and new stand together, as the Tokyo Tower looms over the temple. Though they stand in stark contrast to one another, it somehow just works, one of the many paradoxes I loved about the city.

What kind of tree is Grant’s Pine?, GCG0FG

No visit to Japan would be complete without sampling some famous sushi! Japanese cuisine has not been commonplace in Ireland for long – the first noodles restaurant opened in Dublin in 1995 and it was 10 years later that I experienced sushi for the first time, as it travelled around the conveyor belt at Yo! Sushi in Dundrum. Suffice to say, despite initial reservations, I couldn’t get enough of the raw fish delicacy, so it was high on my list of must-eat when in Japan. And eat it I did. Almost every day, in fact!

Sushi originated in southeast Asia in the second century as a method of preserving food. However, it was not until the 1820s that sushi as we now know it came to be, when chefs starting using raw fish in what is known as Edo-style Sushi (previous to this, fermented fish was used).

Sushi has its roots in the fast food business with street vendors dominating Tokyo in the early 20th century. While you can still sit in lavish surroundings and enjoy it, the best sushi – for both taste and value – was the selection I had at a standing sushi bar in Shibuya. We went in, picked what we wanted off the menu, the chef prepared it in front of us (I love that part!) and I stood while eating it. It was delicious.

If you want to linger over your sushi and try all on offer, take a seat at the bar in a sit-down restaurant, watch the masters at work and enjoy some ice-cold sake to wash it down. Perfection!

Tokyo has so much to offer, from the ultra modern – almost futuristic – like a robot restaurant, to the ancient and austere, such as the wonderful shrines and temples. Both the old and new sit so beautifully side by side, and make Tokyo the wonderfully eclectic city it is.

What do you prefer when visiting a city? The modern or historical? Let me know in the comments!