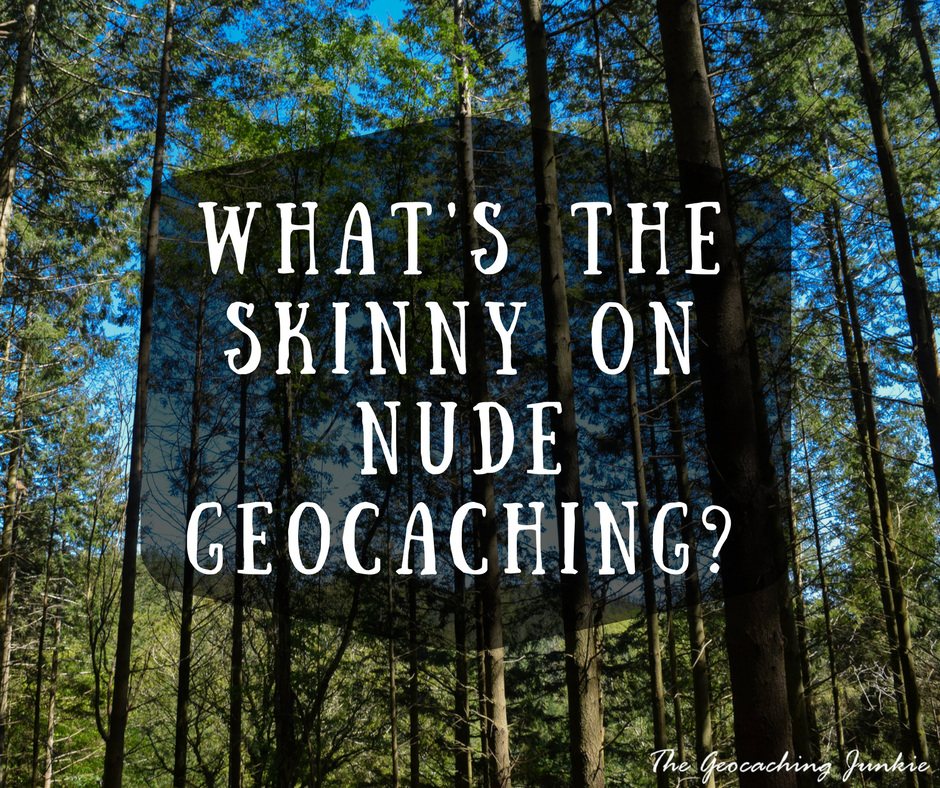 We’ve all been there: you’re right in the middle of something and think, “I’ll just check Facebook quickly,” and the next thing you know, after a number of clicks and several new tabs, you’re elbow deep in a subject you possibly never heard of before today. It’s generally quite a waste of time. Sometimes though, I discover something that I just know I have to write a blog post about.

Such was the case when I stumbled across a Facebook discussion about nudist geocaching. I can’t say I’ve ever had an interest in naturism, but when I discovered that there were cachers out there hiding so-called clothing optional caches and making finds sans attire, I had to find out more, not least of all because…. why?

To learn a bit more about clothing optional caching, or geonuding, I got in touch with geocacher Gary (kw4gt), who not only enjoys caching nude but has hosted clothing optional events and owns a clothing optional cache in his home state of Florida. Gary has been caching since 2008 and quickly discovered that there were already clothing optional caches available, discovering some in California, Canada and Germany. In fact, from the little bit of research I did, I found this cache, called Clothing Optional, which is now archived but dates from 2002.

First things first, what is Naturism?

Naturism at its most basic definition is the practice of going nude, especially in social settings. The International Naturist Federation defines it as:

… a way of life in harmony with nature characterised by the practice of communal nudity with the intention of encouraging self-respect, respect for others and for the environment

There are naturist federations in 48 countries listed on the INF website, together with a long list of clubs and resorts. It was difficult to find any exact numbers on how many people identify themselves as nudists, but this article from 2017 in 2017 estimated that are 3.8 million nudists in Britain. The American Association for Nude Recreation had over 30,000 members in 2015 – of course, this doesn’t take in to account the many nudists who haven’t registered with the AANR.

Caches that require the seeker to be nude in order to make the find are not permissible, presumably because this would equate to an additional logging requirement (ALR). This is where the term ‘clothing optional cache’ comes in: you can find the cache while nude, if you choose to, but it’s by no means mandatory.

So what is a clothing optional geocache?

Basically, it’s an otherwise standard cache where you don’t only have the option to find the cache naked, but you are actively encouraged to do so. There are some nude friendly hides that are identified as such, like Gary’s Owasso Shalom Clothing Optional Cache, but others are not clearly marked as such, although they are included in this bookmark list of Nude Friendly Caches.

Gary tells me that any cache that requires a hike to get to can be a nude friendly cache, provided you visit at non-peak times. Gary likes to cache au naturel from late Spring to early Fall, as hardly anyone caches in Central Florida during that period.

Those who geocache naked will likely be people who practice naturism in many other aspects of their lives. Gary used to be an active skydiver and would always dive naked. Geonudists are essentially nudists who also geocache.

Gary tells me that he tries to live his life as naked as possible:

Caching is one of my interests, so naturally I cache naked. I established my clothing optional cache to give others a low risk way to experience the outdoors unencumbered by clothing. Until they experience natural, non-sexual outdoor nudity themselves, way too many people think that nudity is just about sex.

Just as many geocachers combine their caching activities with other things, some naturists also like to combine their way of life with their geocaching habits.

How do people react to nude geocaching?

The Facebook post that brought geonuding to my attention was full of mixed opinions about it: most people had no issues, but there were some who were downright outraged by the whole thing. So, what has been Gary’s experience of other geocachers’ reactions? He has seen a wide range of opinions in the Groundspeak forums, but the feedback he has received on his clothing optional cache has been overwhelmingly positive, even when the finder has opted to remain clothed. He added:

I have been thanked for being clothed at a local event, but
that was done good-humoredly.

There’s just one more question that needs to be answered at this point:

Where Do They Keep The Pen?

Arguably the most important part of geocaching, signing the log is a must to make your find count and it’s good practice to have several writing utensils on your person when out and about. But where do pocketless geonudists keep their pens? The answer from Gary is a simple, “in my backpack.” Where else? 😉

10 thoughts on “What’s the Skinny on Nude Geocaching? | The Geocaching Junkie”