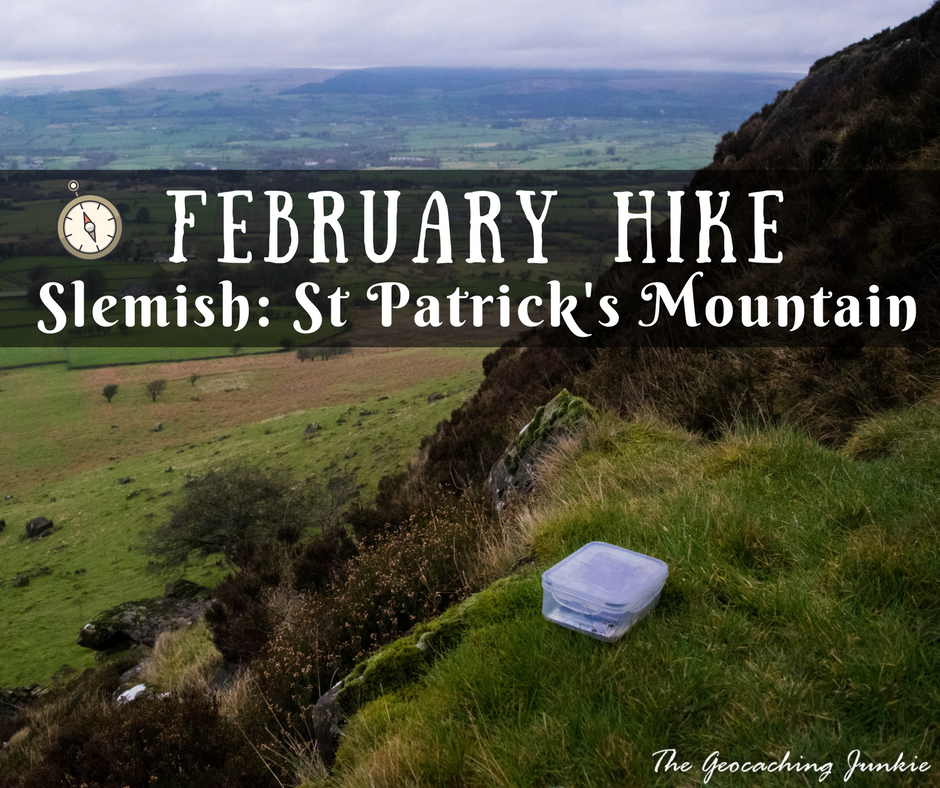 I have discovered that not thinking too much about an impending hike, or trying to avoid too much advance research about the difficulty of the climb, helps to minimise my nerves beforehand. So basically, living in denial somewhat, is the extent of my planning for a hike. With this in mind, it was only when I arrived at the Slemish car park with cep99 and peacockealot that I was informed there weren’t any actual trails to speak of up the mountain. Suddenly, January’s uphill slog at Kilbroney Forest Park seemed like a veritable walk in the park compared to what was ahead.

Luckily for me, my hiking companions were much better prepared than I was and I had been instructed that I would definitely need hiking poles. By a happy coincidence, Lidl had hiking gear on special last week so I was able to pick up a great pair (though I only used one on the day).

Ireland’s patron saint is believed to have tended sheep at Slemish during the six years he was enslaved and worked for a local man named Milchu. It was during the course of his time here that Saint Patrick converted to Christianity, so needless to say, this mountain has a very important place in Ireland’s history. On the saint’s feast day – 17th March – large crowds climb to the summit as a pilgrimage.

The geocaches dotted around Slemish make reference to St Patrick and snakes. If you are familiar with the legend of the saint, you will be aware that he is said to have banished all the snakes from Ireland. In fact, it’s highly unlikely that snakes ever existed in Ireland, despite my unwavering belief in the myth as a child!

Our primary reason for choosing Slemish as the February hike location was a WherigoTM   that hadn’t been found since 31st August 2014, thus making it eligible as a so-called ‘resuscitator’ cache, or a ‘BBTC’ (bring back the cache). There were no DNFs recorded on the page, so we were quietly confident we’d find it. However, WherigoTM  cartridges can be temperamental so it was by no means a sure thing.

It seems the luck of the Irish was with us, as the cartridge worked without a hitch and we soon had the final coordinates in hand! GZ wasn’t at the summit as we had first thought but we were given a taste of the climb ahead of us when we made our way to find the cache.

The way to the WherigoTM  cache was quite steep but mercifully short, and peacockealot spotted the lonely container almost instantly once we were at GZ. A quick check of the logbook revealed it had indeed been 902 days since the last find!

I have brought a few caches ‘back to life’, but I think 902 days might be my personal best for length of time between finds.

There is no trail!

The difficult part about climbing Slemish – though the distance to the top is relatively short – is the fact there is no actual trail all the way to the summit, and it’s a steep climb. There is a track, including some grass covered steps, from the car park to the foot of the mountain, but after that, you’re on your own and have to decide in what spot you want to drag yourself up to the top (or skip up to the top like a mountain goat, depending on your level of fitness!).

I’m sure, for a lot of people, the lack of an actual trail may be no big deal, but in my thoroughly unprepared state, I was completely gobsmacked by the prospect of a proper, actual climb.

Peacockealot led us to the south side of the mountain to start our ascent, reassuring us that it was a ‘gentler slope’ and therefore an easier climb. Having ascended and descended on this ‘easier’ route, I dread to think what the alternative routes were like!!

My normal demeanour during a mountain ascent is flushed cheeks and breathlessness, but I think my fitness level must be improving because it really wasn’t that bad.

Perhaps it was the fact I was distracted by thoughts of ‘how the hell I am going to get back down from here?!’ It was steep. So steep that a glance downwards made me slightly dizzy. Climbing up is one thing, but returning down a sharp mountain face is quite another.

Channelling Maria – on a Volcanic Plug

We made it to level ground at the top and the gusts of wind threatening to tip me over made me think that perhaps getting back down might be a lot faster, if not more likely to lead to injury, than I had imagined on the way up.

As is the usual state of affairs, all worries were forgotten when I stopped and drank in that view! It may be only 437 metres high, but Slemish is isolated from other hills and therefore affords marvellous 360 degree vistas.

Slemish is actually a clear example of a volcanic plug – essentially a mound created when magma oozes to the surface from an active volcano. The volcanic activity in this area dates back approximately 60 million years ago and the slow cooling of the magma resulted in the formation of dolerite.

We enjoyed a snack at the top, and I couldn’t resist doing a victory pose when cep99 took my picture: there is definitely something elating about conquering a mountain! When I shared the photo on my Facebook page later that day, my sister quoted a line from The Sound of Music, suggesting I had, in fact, been channelling Fräulein Maria.

My eyes tend to water uncontrollably when it’s windy so the first part of our descent, I struggled to see anything in focus, which hindered my calm levels. We eventually made it out of the wind tunnel and it was a steady-as-she-goes walk to the bottom, with (amazingly) no major falls, and only a few minor slips which I unsuccessfully disguised as rest-stops!

I could really feel the effects of the steep descent on my poor, poor knees but was satisfied that I made it back to the car in one piece! It was a great day, with 6 different cache types on 7 finds and only one DNF! And most importantly: another summit conquered!

Have you been on any awesome hikes that you think I should check out? Do you have any hiking tips for me? Let me know in the comments!

A Gate with a View, GC1V1DZ