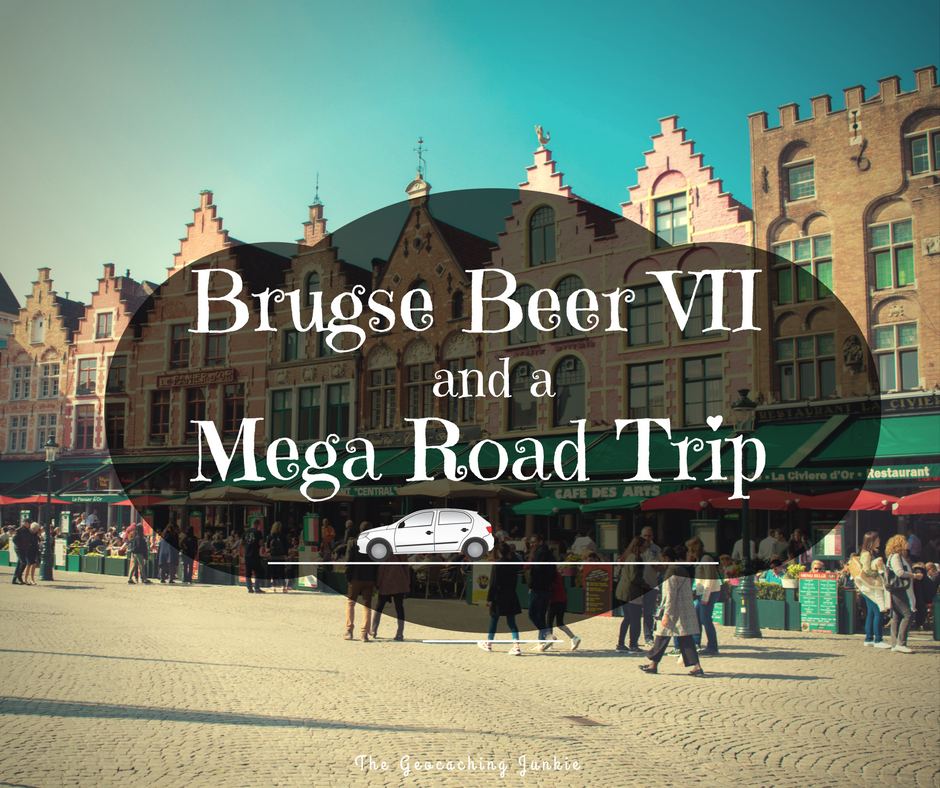 In theory, I’m reluctant to revisit somewhere I’ve already been, simply because there are so many places in the world and so little time (or money) to facilitate visiting them all. However, my recent weekend in Belgium was the third consecutive year that I’ve visited the centre of the European Union. The small country is famous for its chocolate, waffles, fries and beer, but it’s not (solely) the culinary delights that have lured me to visit time and again. Belgium is the perfect base to explore four other European countries and has so many cultural delights to offer itself that I have yet to fully satisfy my appetite to see and experience all of it.

This year, my road trip companions were THE_Chris, cep99 and peacockealot. The plan was loose, but included two nights/three days of caching, with a bit of culture and cuisine thrown in, and a LOT of kilometres driven on the ‘wrong’ side of the road!

After queuing for a ridiculous amount of time at the car rental desk, then entering full-on panic mode when I couldn’t find my passport (sometimes so many pockets is, in fact, too many pockets), we finally hopped in to our Citroen Cactus and were on our way northwards to Bruges!

The traffic was abysmal en route to the mega (this unfortunately proved to be a theme of the weekend), so we arrived the venue a lot later than expected. I was on 2,997 cache finds at this stage, so we made a little detour to get two more on the board before heading inside and making a beeline for the giant ‘7’ logbook. I even got Signal to pose with me for a 3k commemorative photo!

There were a whole 19 lab caches available on the day so they kept us quite busy (the best was the teddy bear pit!). After a friendly but heated exchange with the friet man (him: “you’re English!”, us: “no, we’re Irish”, him: “it’s all the same to us”, me: “yes like Belgian and Dutch is all the same to us”, him: “no”), we enjoyed some famous Belgian friet with mayonnaise and had soon moved on to driving up and down the cobbled streets of Bruges looking for an elusive parking spot!

Bruges and the Second Best Ice-Cream Ever

The traffic jam en route to the mega had pushed back our plans for the whole day, so we didn’t have much time to enjoy the sights and sounds of beautiful Bruges (which leaves the city firmly near the top of my must-visit-again list). 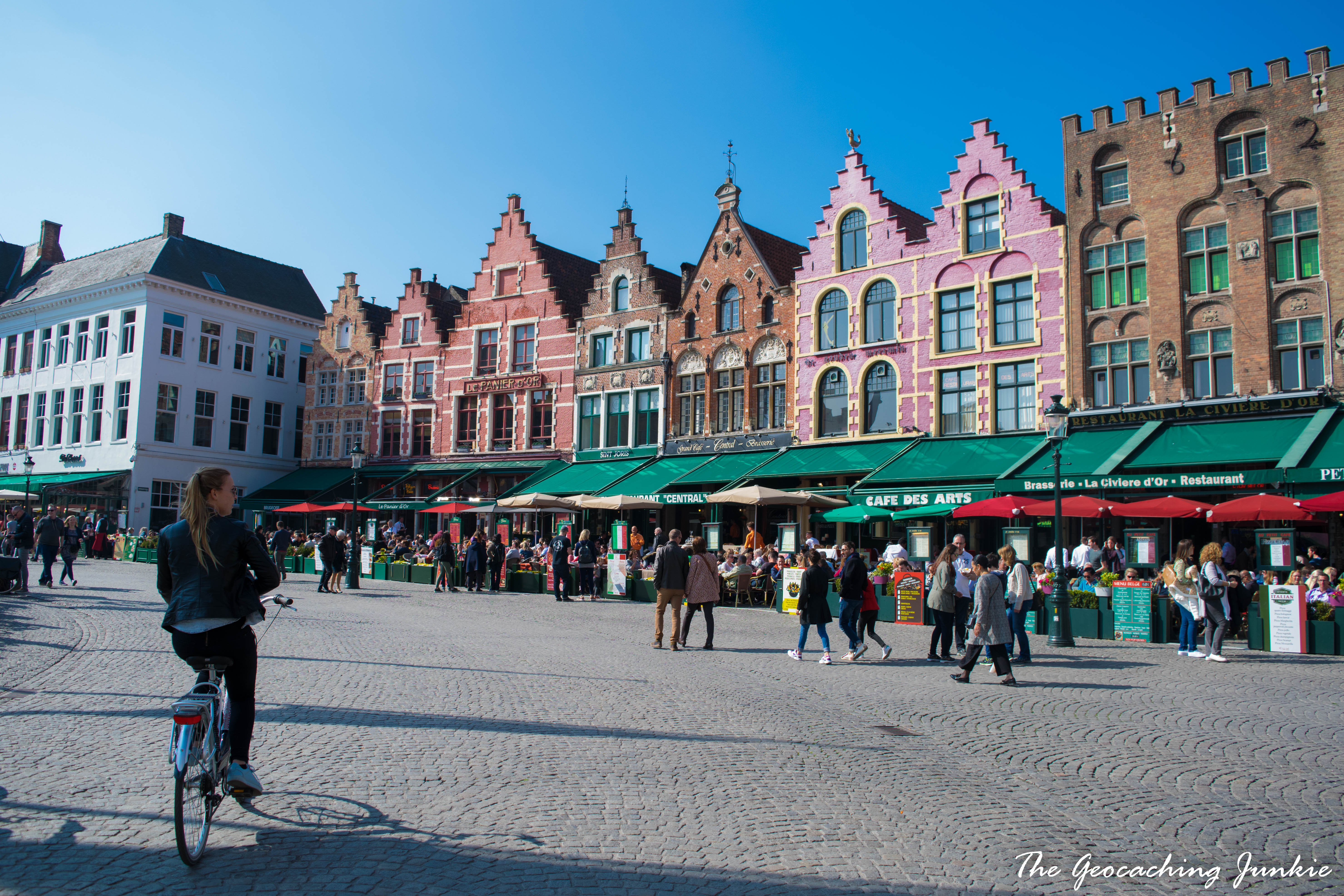 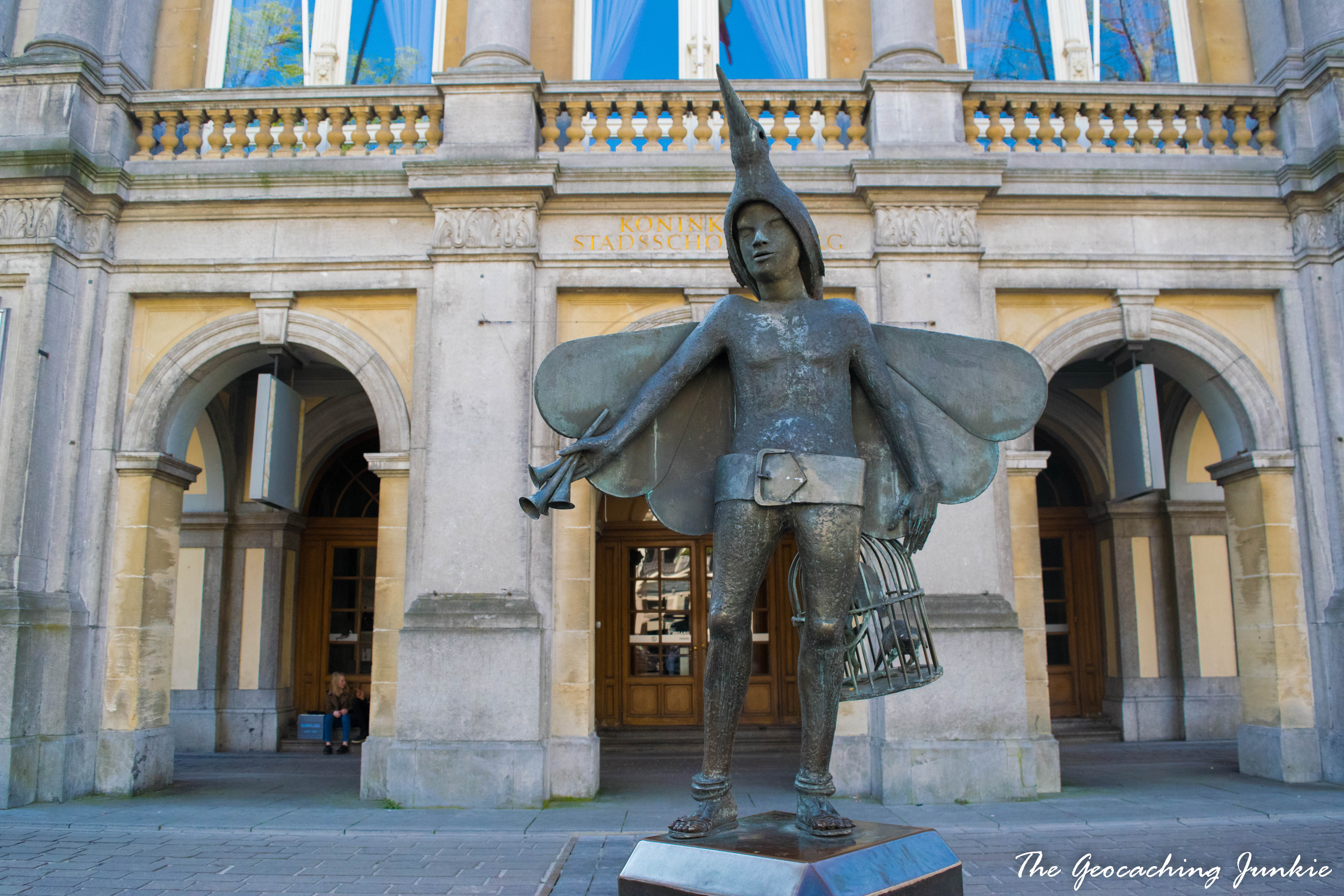 THE_Chris was raving about a certain ice-cream place, which served “the second best ice-cream” he’d ever had, so we headed straight there first. Sure enough, the queue stretched all the way across the street, and the ice-cream was, in a word, divine. I opted for a scoop of raspberry and a scoop of Speculoos (a shortbread cookie popular in Belgium and the Netherlands) and I did not regret it. A visit to Gelateria Da Vinci is an absolute must if you’re in Bruges!

Brussels and a Small Urinating Statue

A Meet the Irish event was scheduled for Saturday evening so we were soon on our way back south to Brussels. I love Brussels. In fact, there is nowhere in Belgium I’ve visited that I haven’t loved. My favourite spot in the capital city is probably one of the most popular tourist hubs: Grand Place. For the uninitiated, it’s the capital’s central square, with opulent facades everywhere you look. It looks particularly impressive at night. 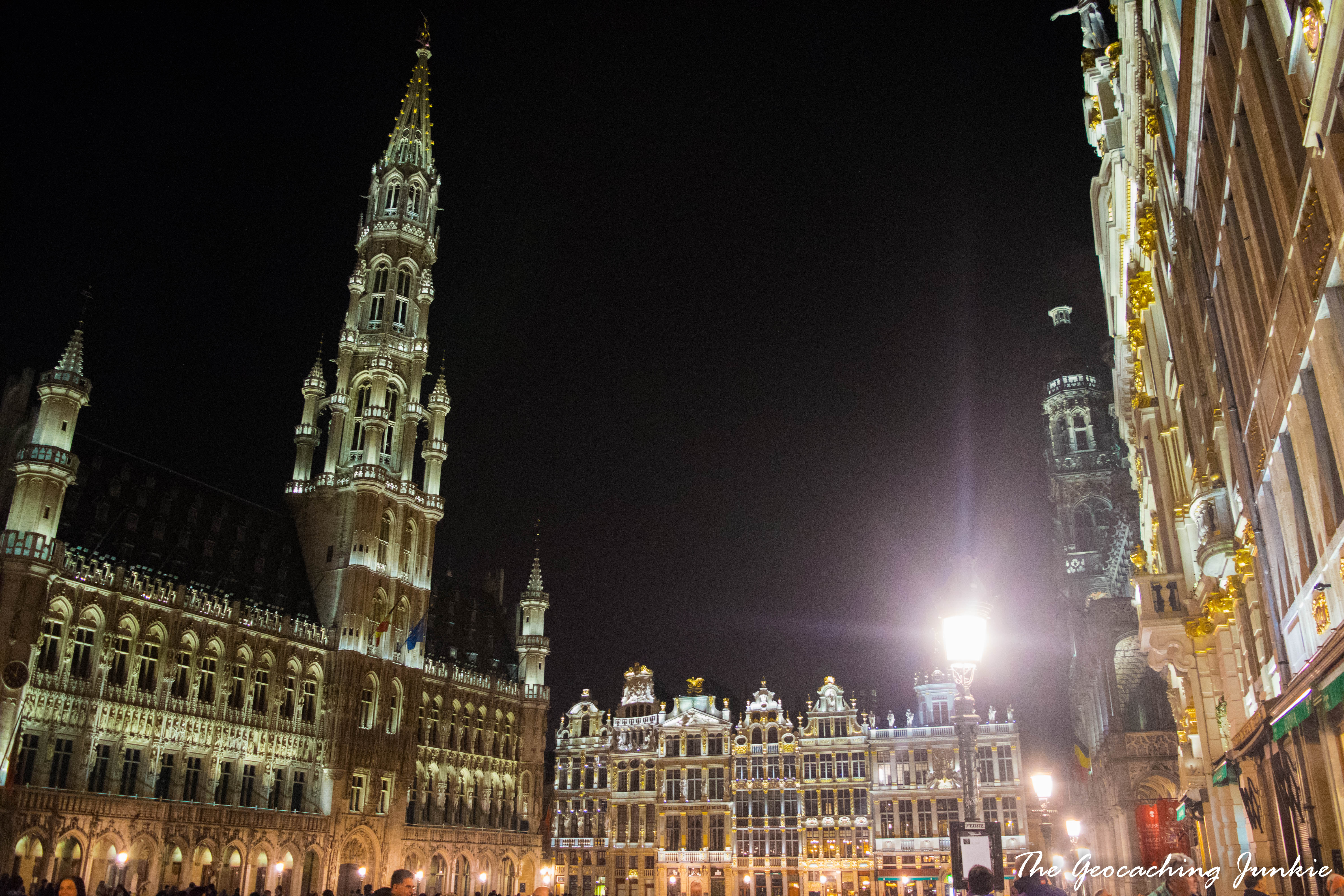 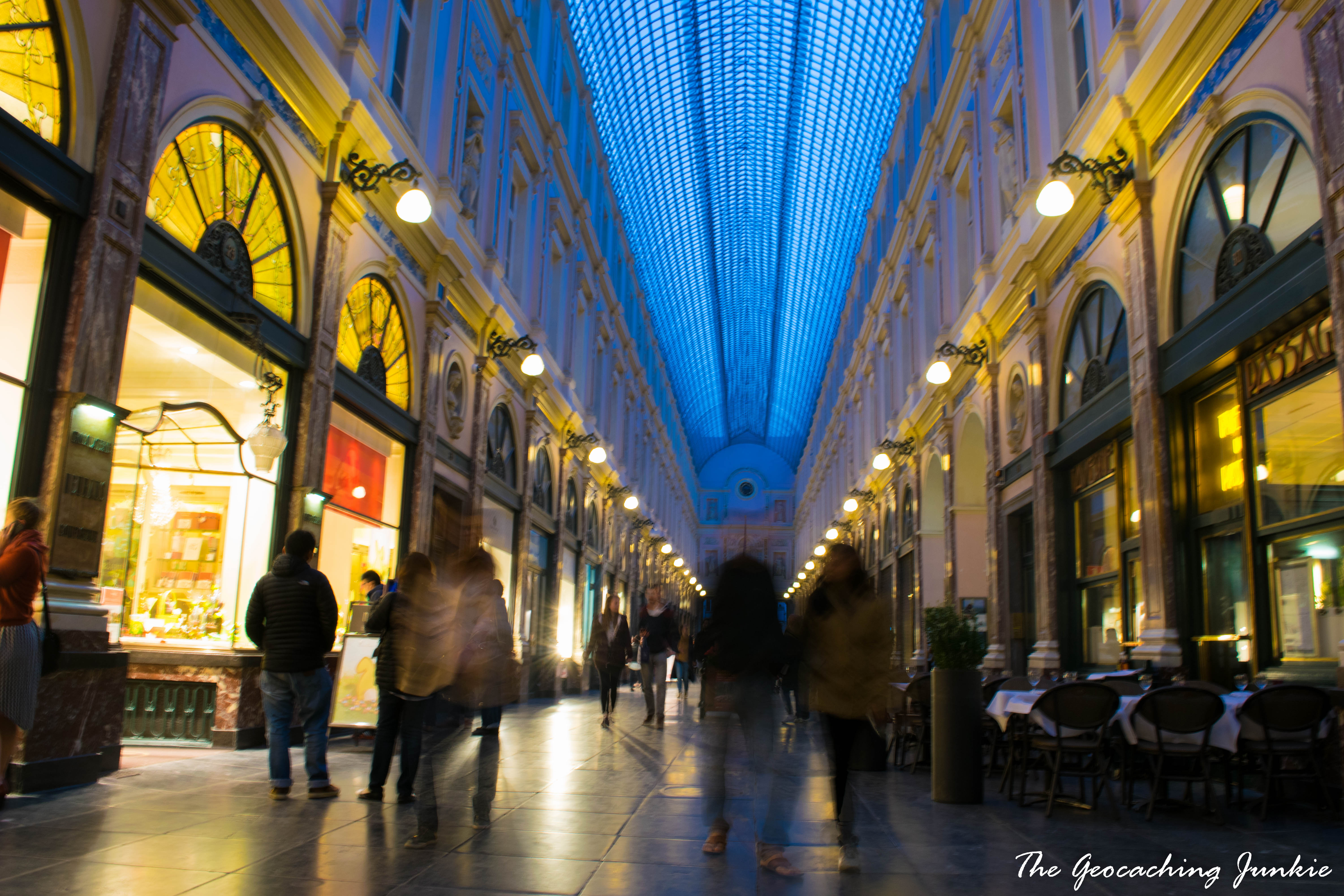 I had found a lot of the caches in central Brussels on my two previous trips but hadn’t nabbed the multi-cache at the famous Manneken Pis statue (GC51048) so that was on the agenda for some after-dinner sport! The tiny statue is dressed in costume several times a week; in fact, he has over 900 outfits! He has been in his birthday suit every time I’ve visited, but now that I know there’s a wardrobe schedule available online, I’ll try to arrange a viewing of him dressed up next time! 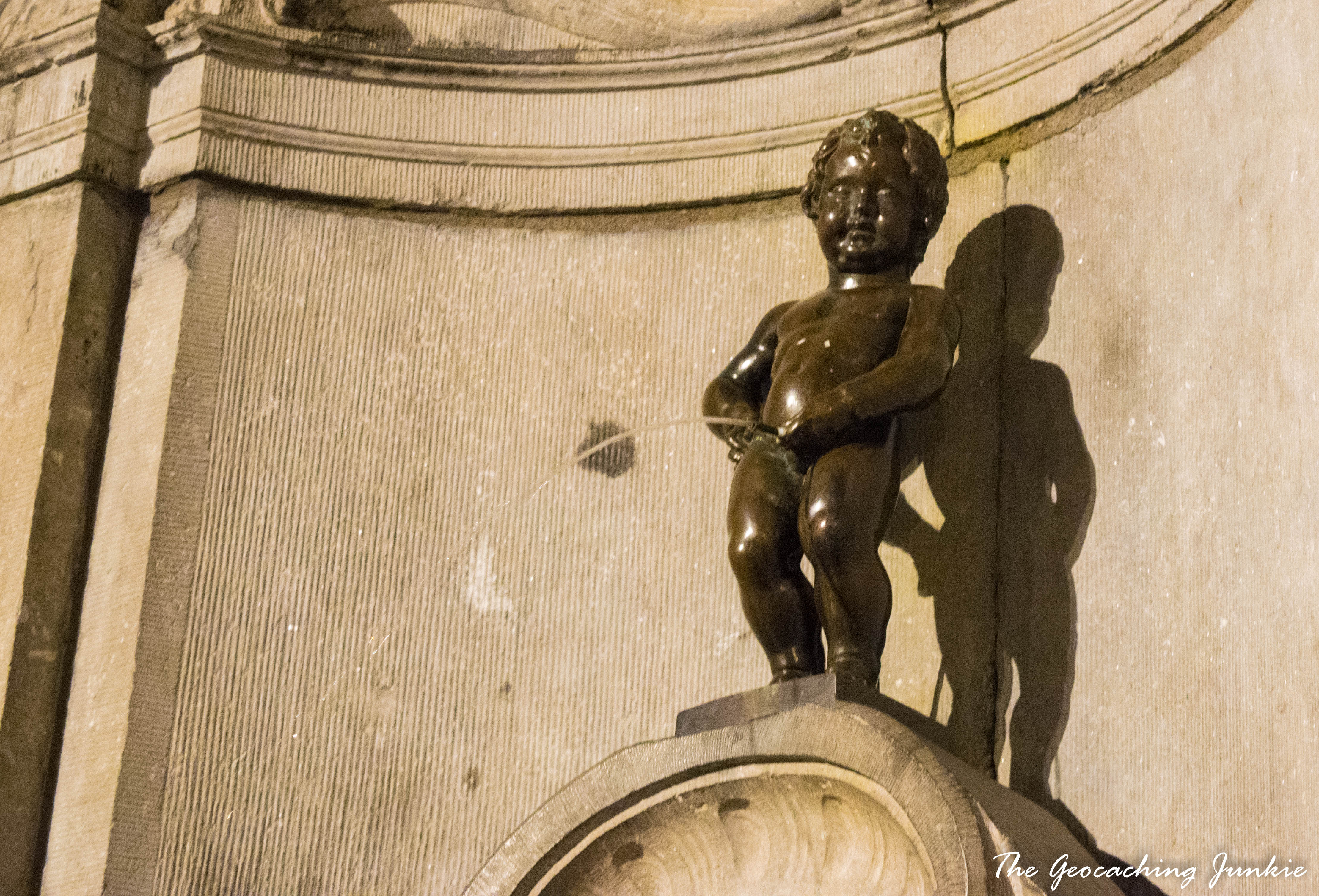 The loose plan for the day was to attend the CITO organised by the mega committee, and then to head to France for some caching there. The area around the CITO, including the nearby park, was almost completely litter-free, apart from a few cigarette butts, so we busied ourselves by heading for a tree climb cache to assess its ‘climbability’. We arrived to discover two other cachers already staring forlornly at the tree. Before you could say ‘that’s a rather large tree’, peacockealot was already up it and signing the log. You can play ‘spot the cacher’ in the below picture 🙂 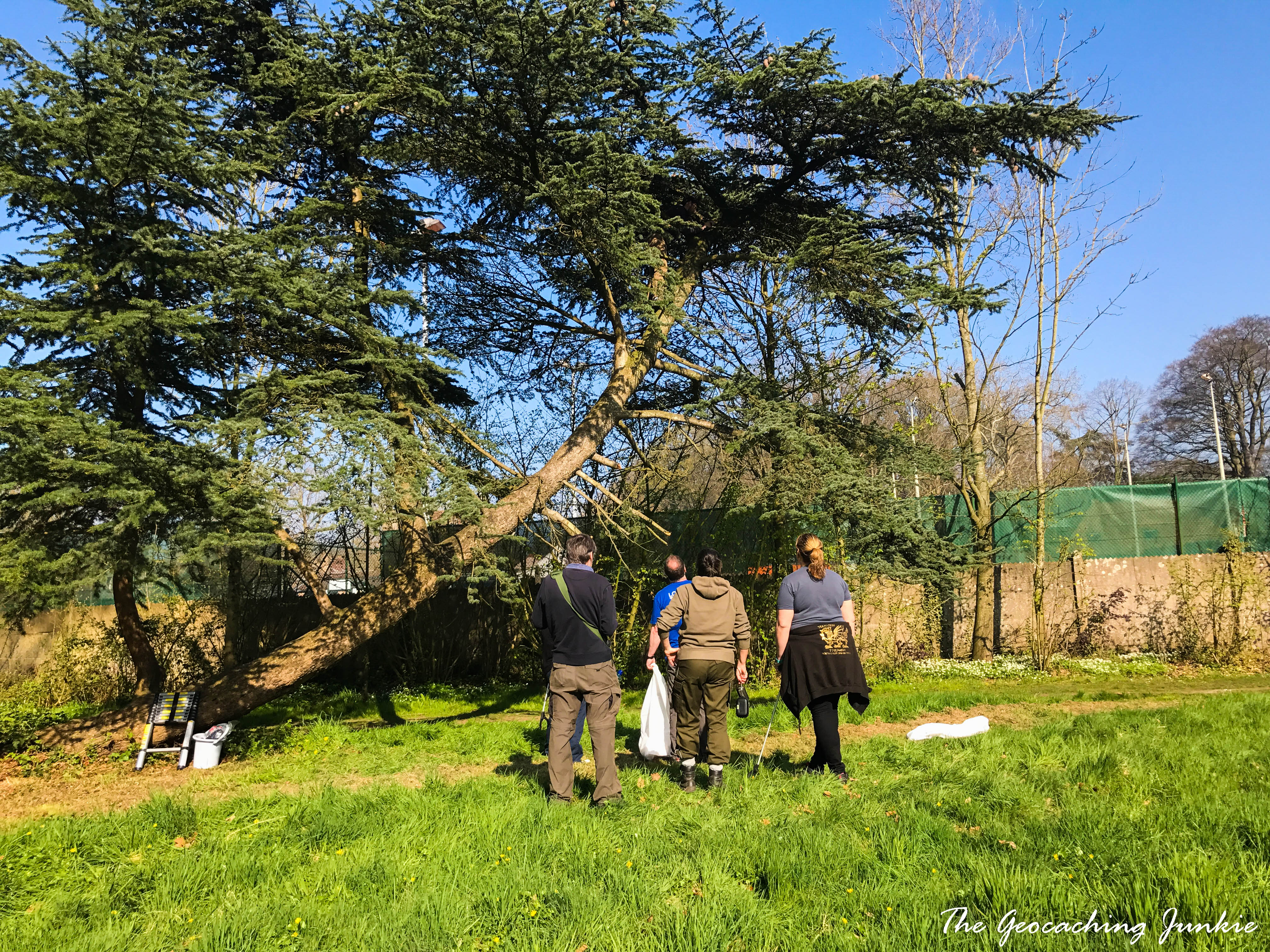 France and a View of England

We had a specific target in France: a visit to the Terlincthun War Cemetery where my great-grandfather is buried, but more of that in next week’s post. Other than that, we found a few caches and enjoyed the blue skies and 24°C sunshine. 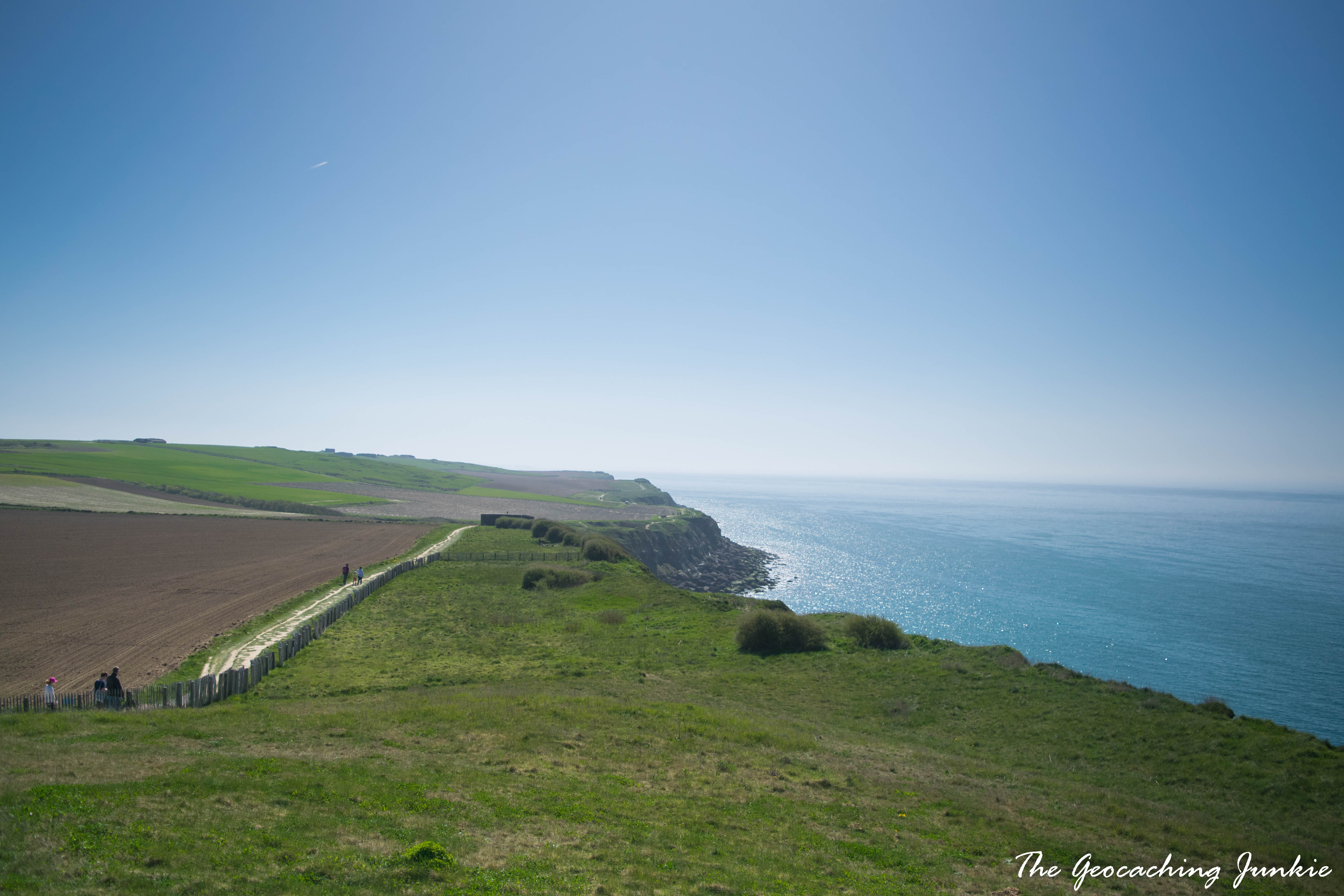 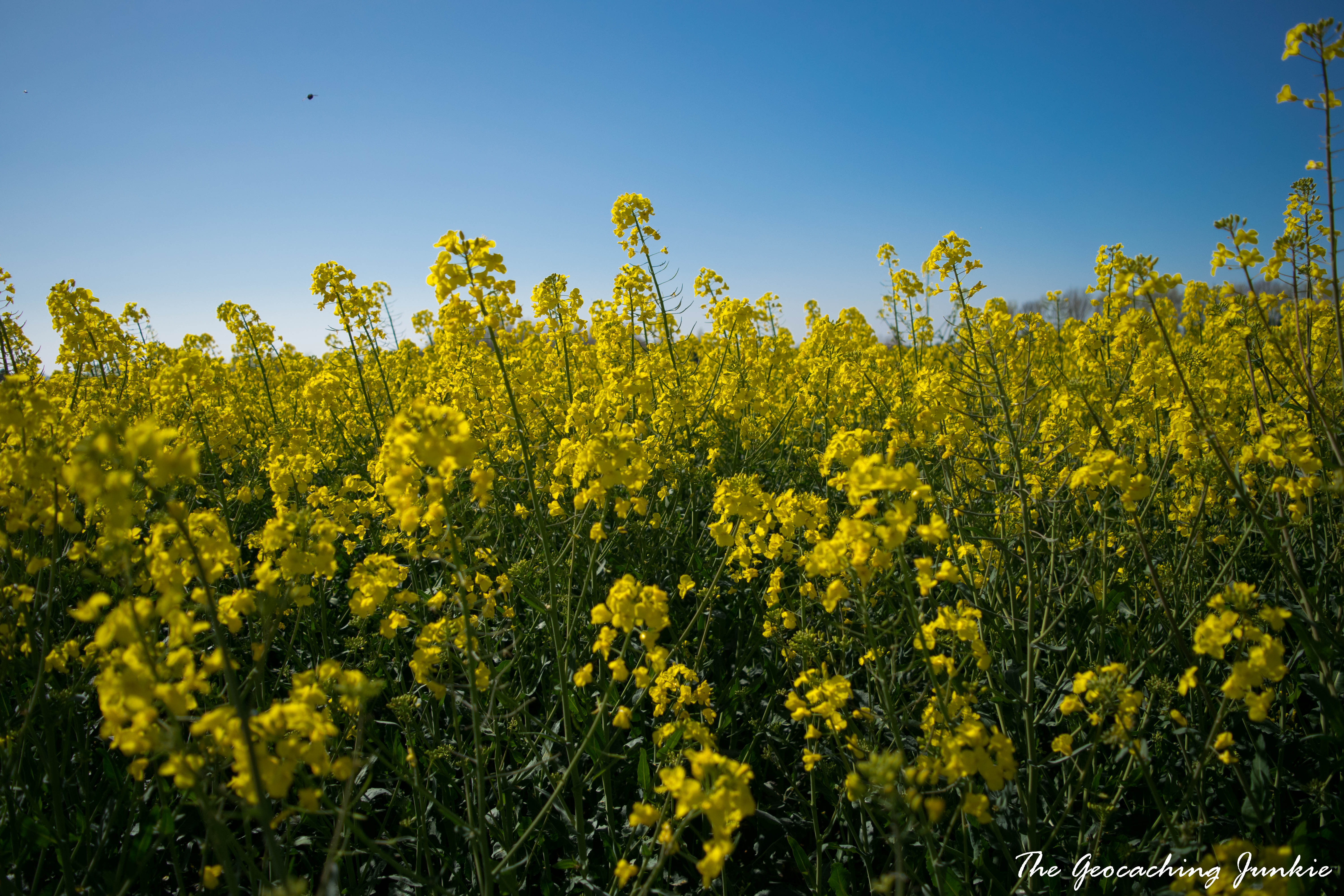 At the EarthCache, Les Œufs du Gris-Nez/The Eggs of Gris-Nez (GC6WEKM), there were great views to the south coast of England, with information boards to show you where you’re looking at, including the white cliffs of Dover. Granted, it was a little hazy but land was definitely visible.

A virtual cache brought us to Vladslo Cemetery, the final resting place of 25,644 German soldiers who died in World War I. 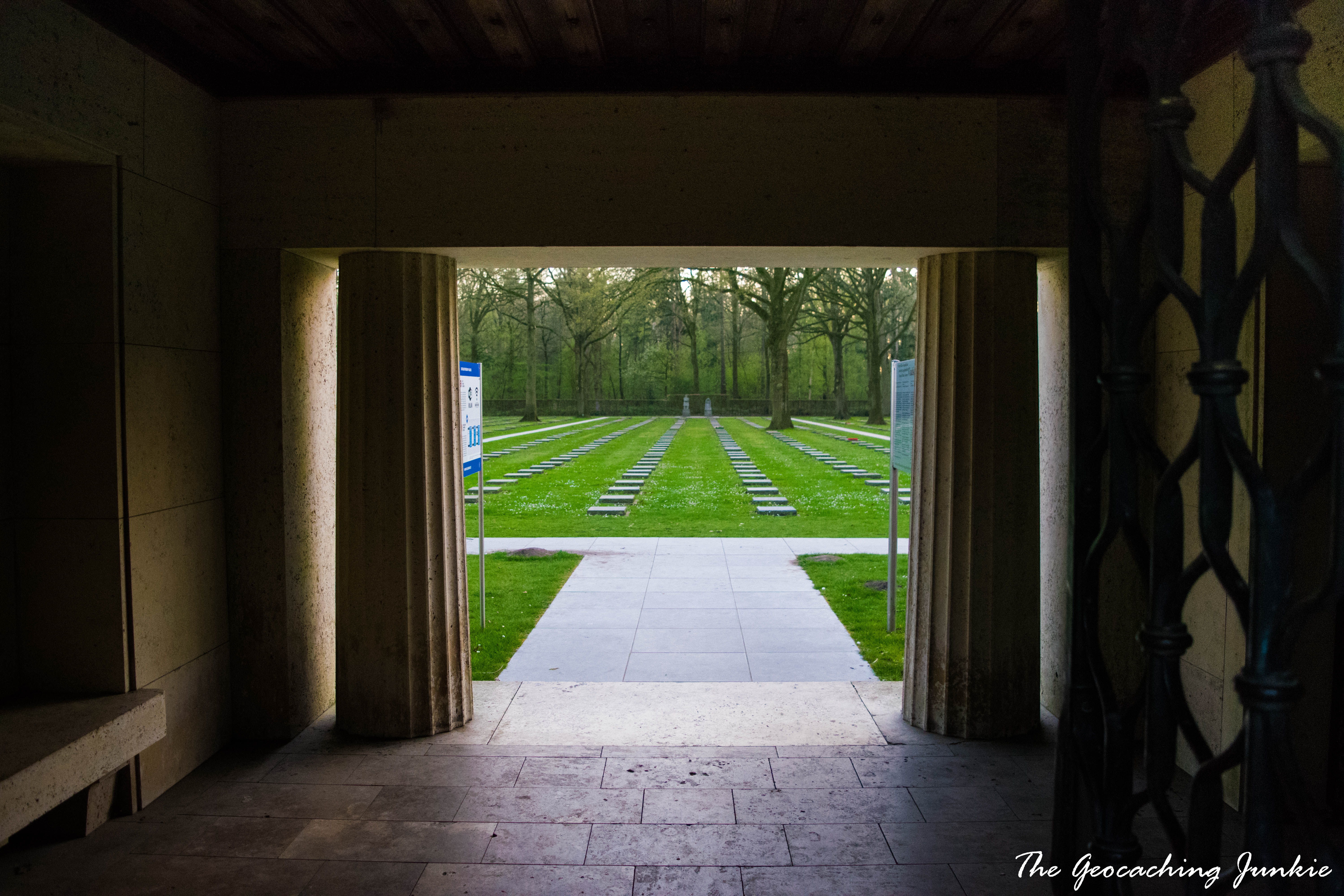 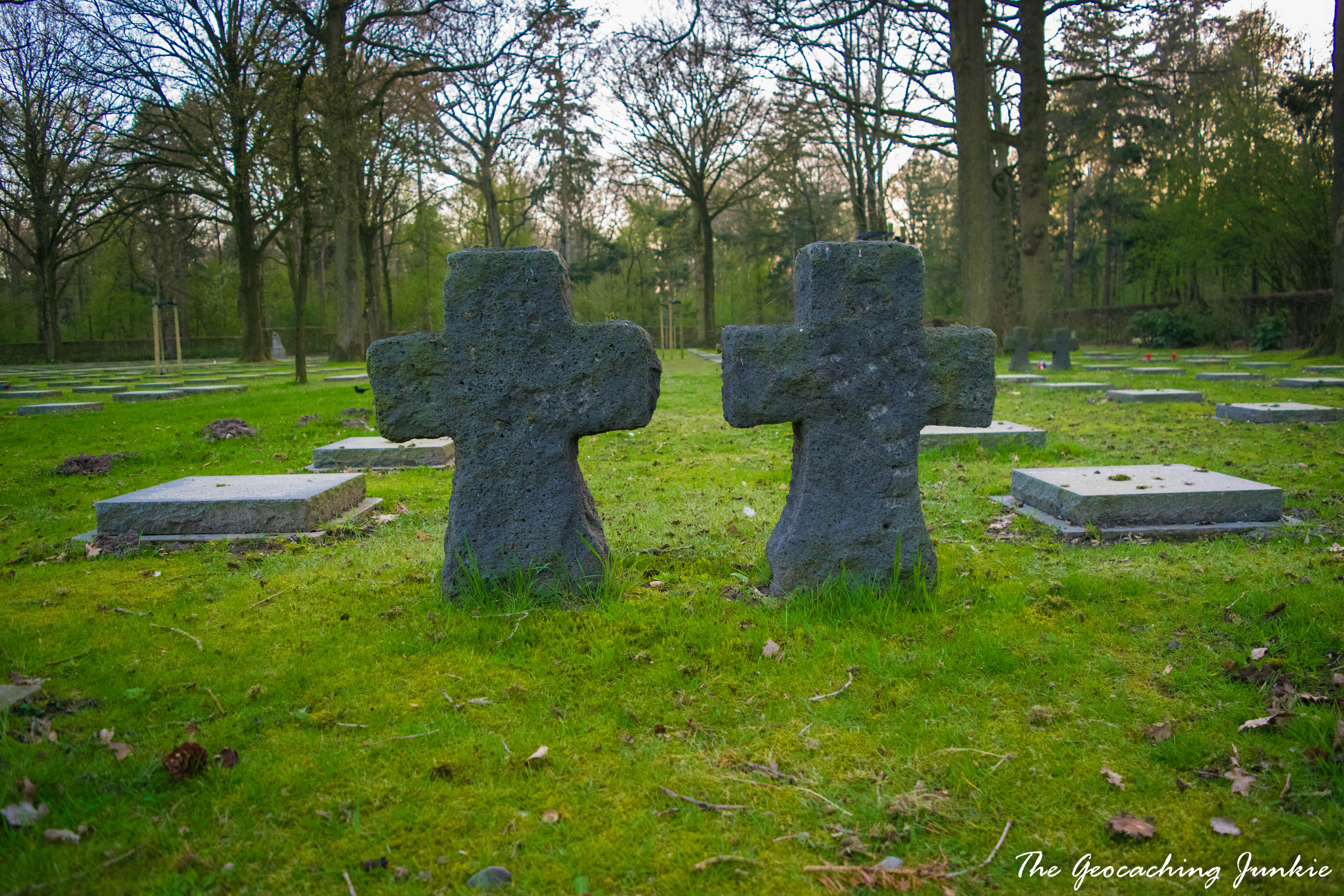 Situated off a quiet road, only the sounds of birdsong and the wind gently rustling the trees can be heard. Such an immense loss of life lies here, the sense of sadness is almost tangible. It is quite different from the British cemetery we had visited earlier, where upright, bright white gravestones donned the name of one soldier each. In Vladslo, twenty soldiers’ details are listed on each grey, horizontal slab. 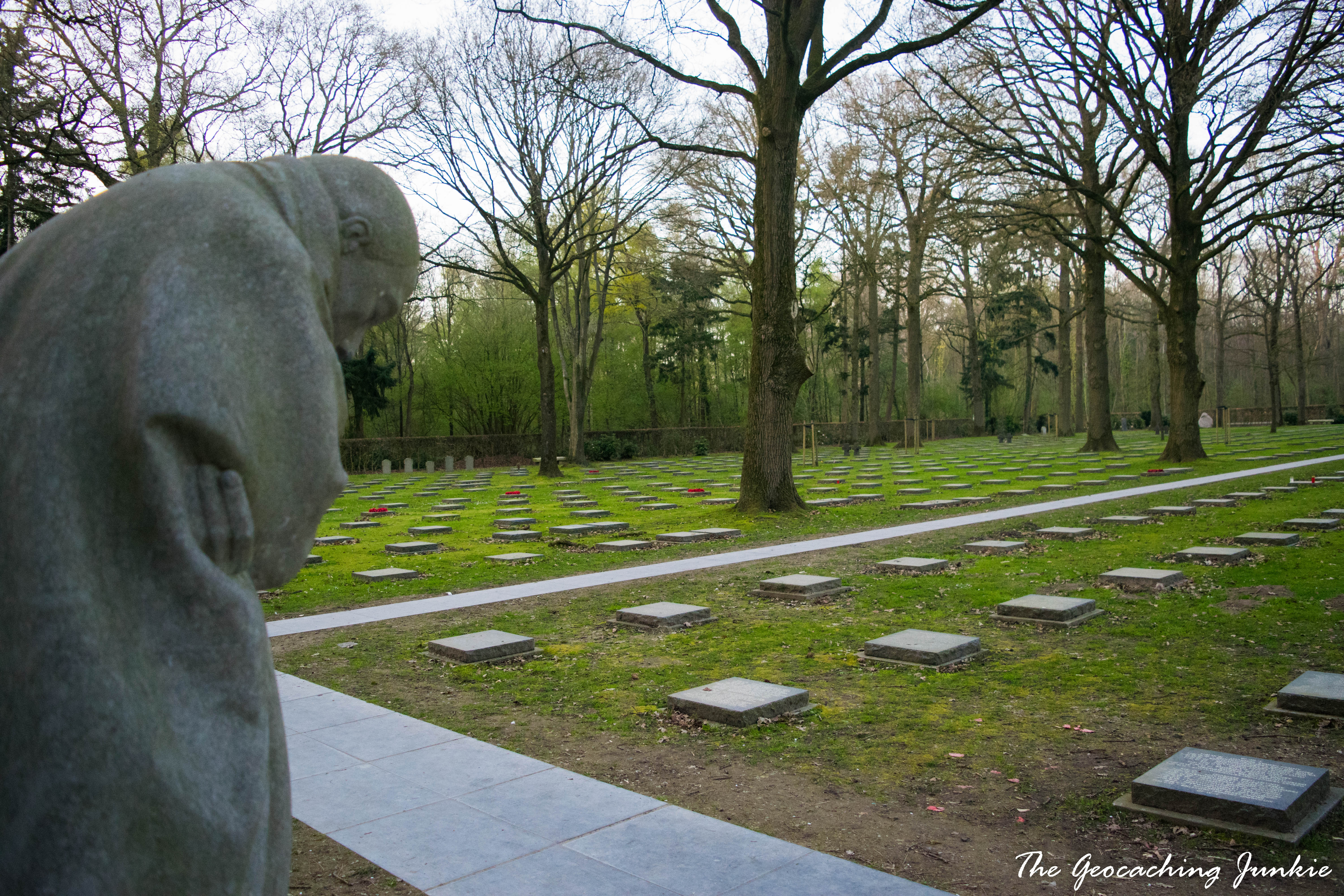 We decided that we hadn’t driven quite enough kilometres for the day, so after dropping THE_Chris back to the train station in Bruges (he was staying in Brussels because he loves being awkward), we headed as a trio to the seaside resort of Knokke-Heist and Belgium’s only webcam cache. 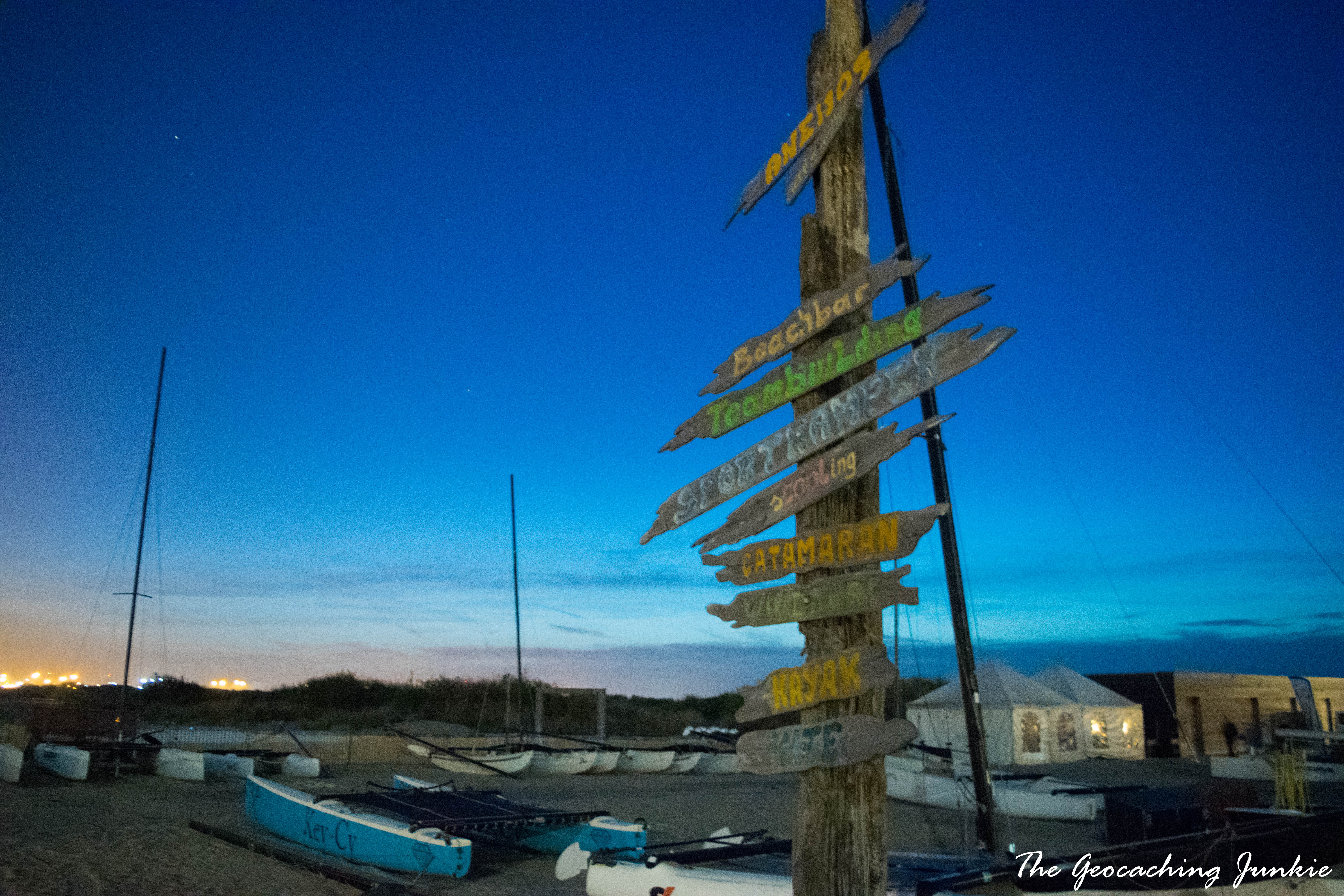 It may have been very dark when we were there (much darker than the picture appears, as I took a long exposure), but we were at the beach after all, so an ice-cream was an absolute must!

Our last morning: Cep99 had realised that we were only ten minutes from the Dutch border so our first stop was just over said border to pick up a cache so cep99 and peacockealot could get their Netherlands souvenir. Then to one of my main targets for the trip: a May 2001 Jasmer that would take me down to just four months left to fill!

The cache is located in the countryside east of Ghent and has a good find ratio so we were quietly confident. Cep99 was doing the navigating and got us to within a 300 metre walk to GZ. The cache description had made us a bit nervous about that last few hundred metres:

Much of the fun and the challenge with this cache is to find the right way to approach it, as the area has many small brooks and paths that are not on the topographic map. Just take the coordinates of the cache and go ahead…

With that detail in mind, when we reached a small stream with a very makeshift, extremely wobbly bridge across it, there was no question we’d all have to cross over. So we did; some of us more shakily than others. Ahem. Once we reached the other side, we soon discovered that the target tree was on the side we had previously arrived at. Murphy’s Law! 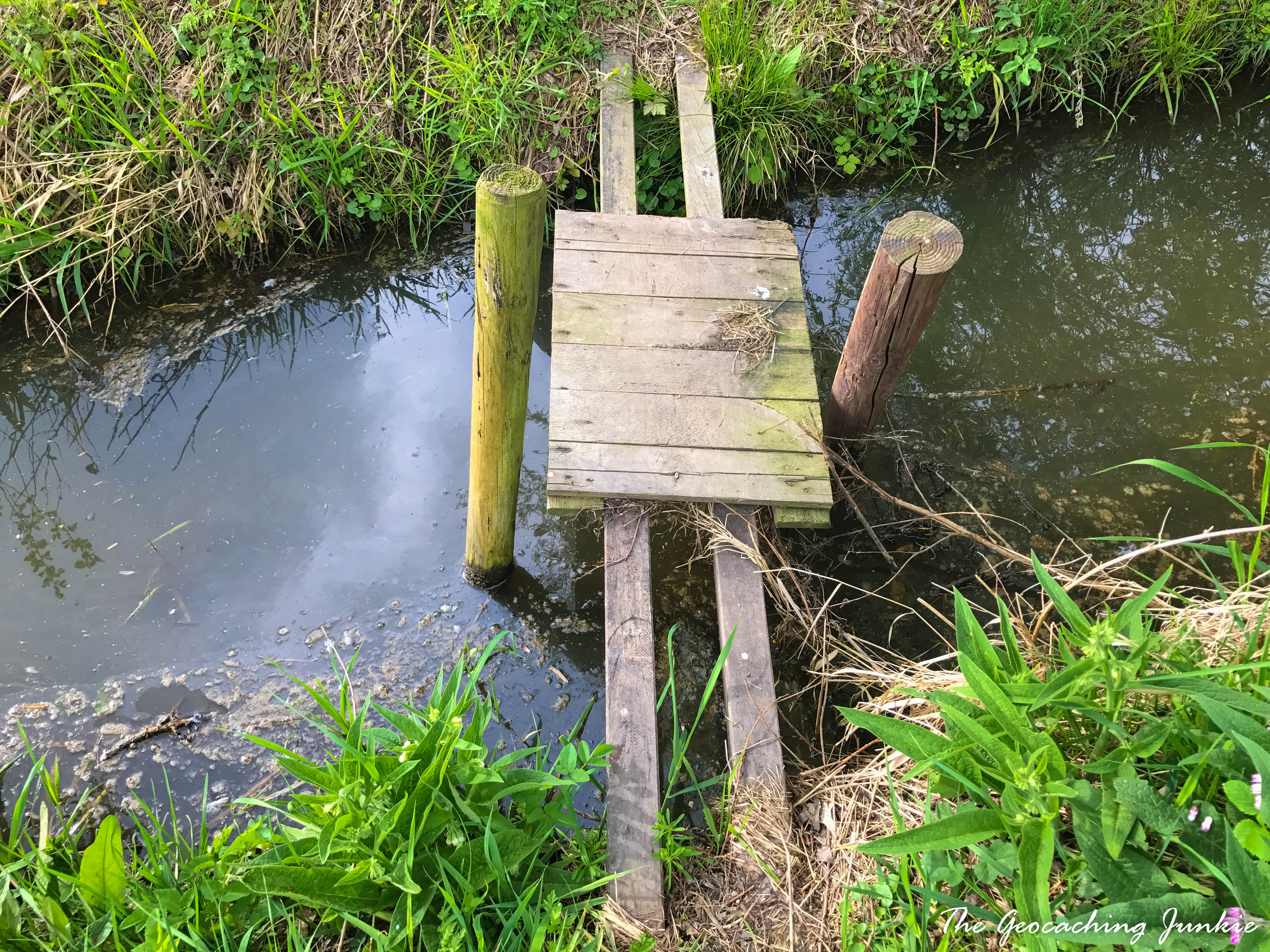 So when that loose end was tied up and we had all retreated back over the dodgy bridge, we assumed it would be a quick find, but alas, no. I searched old logs and photos and we were convinced it was in a particular, difficult-to-reach spot so we concentrated on that. Desperate at this stage, I went back even further in logs, which indicated we were looking in the wrong spot; peacockealot had the cache in hand soon after. Phew! 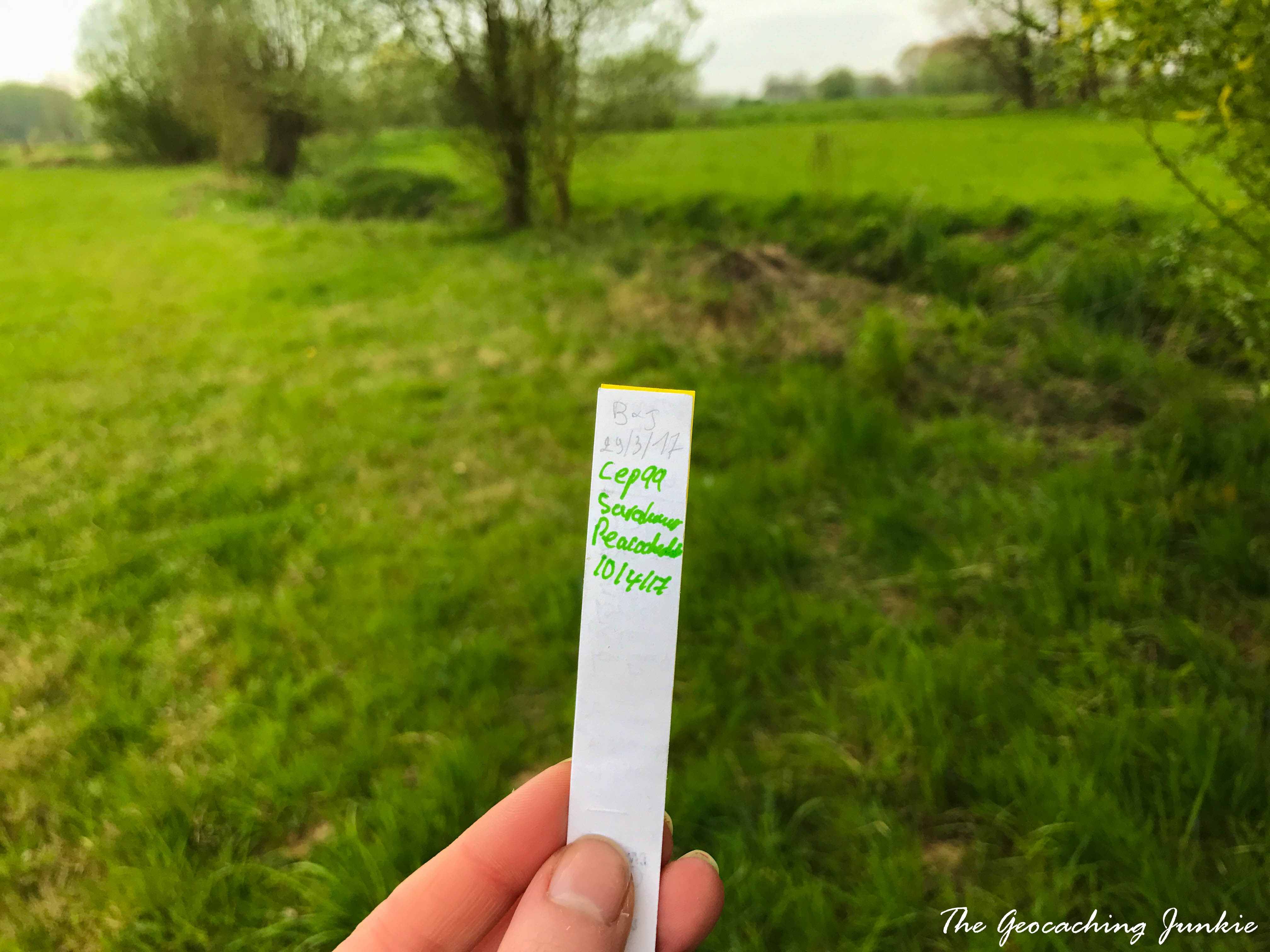 Heading south once again, we picked up THE_Chris and set the GPSr to Geocache, GC40, Europe’s second oldest active geocache (don’t let the numbering put you off; GC43 is over a month older than Geocache). This was my third time at this cache; I’ve been to some caches I own less often! Interesting was the difference in the container over the three years: is it the same container with different artwork or three different containers? I can’t tell.

The ammo can was opened to reveal some intriguing swag..! Cachers emerging from caches might just have to become a photo blog series (refer pic below 😉 ).

There was just enough time for a few more leisurely cache finds as we made our way to Brussels airport to drop off our rental car, which now had over a thousand additional kilometres on the clock since we picked it up on Saturday morning. It was one hell of a geocaching road trip:

My next planned Mega event is in June in France and it will be a short trip, with considerably less crazy driving (I hope!). Have you gone on any mega geocaching road trips? Let me know in the comments!