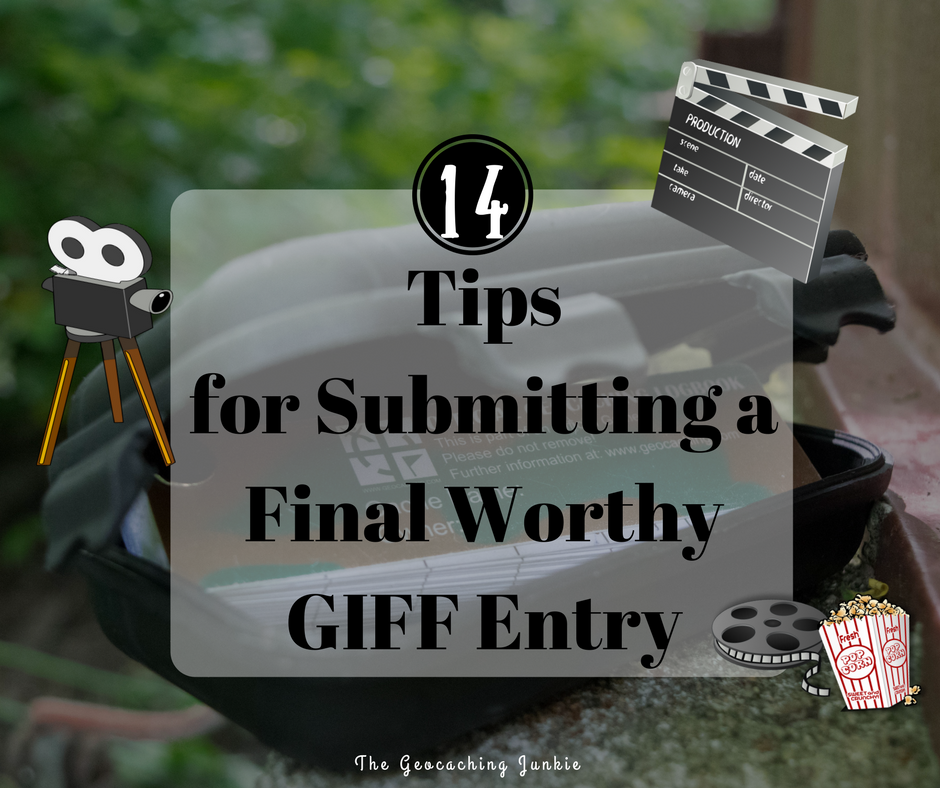 With less than three months to go until entries for GIFF 2017 close (the deadline is 1st August), I collaborated with the experts to compile a list of top tips for creating your own final worthy film!

What is GIFF anyway?

GIFF is the Geocaching International Film Festival, where geocachers submit films about, well, geocaching, and a panel of judges at Geocaching HQ pick approximately 16 films as finalists. The finalist films will be shared outside of HQ with a select number of community volunteers, who will review them and vote for a winner. The films are judged according to the following criteria:

How do I enter?

You can read all the submission rules here. Tuesday 1st August is the deadline for submitting your entry via Vimeo.

Not every film can be a finalist, so how do you give yours the best chance of making it to global GIFF events to be viewed by the international geocaching community? Here are a few expert tips from some of the GIFF 2016 finalists!

Last year’s winner, cth-ulhu, who lives in Istanbul, Turkey, advises wannabe GIFF entrants to take time to “watch the finalist videos of previous years.” Be inspired, but don’t just do a ‘copy and paste’ job.

This is the fifth year of GIFF, so a lot of ideas have already been done. You need to make yours stand out by telling a new story. Stingrayabbray, based in Santa Barbara, California, has this tip:

My advice would be to tie in some of your other hobbies or other aspects of your life into your geocaching story. That’s a guaranteed way to make your film unique and interesting.

3. Get your story straight

It’s a must to have your story straight in your head and also written down, according to Seemyshell from Australia:

Have a story in your mind and how you would like to watch it, think of the idea that a picture tells a thousand words. You can also make up a ‘storyboard’ (..) This will give you great ideas of filming, with the angles you want and what you want to highlight in each shot. This will also save you time in the field, and allow you to not forget any scenes.

Seemyshell is not a stranger to being in front of the camera – you can check out his geocaching adventures on his YouTube channel:

Gasgoose, from Wyoming, suggests including an ‘in-joke’ that only cachers will understand:

There are tons of things that only geocachers can relate to, and incorporating them will greatly enhance your film. For example, forgetting the pen at the end of mine is something almost every geocacher can relate to.

German geocacher treasurehuntergd advised me it’s important to have “motivated actors”; in his particular case, “to find a woman who was ready for the bed scene”!! Make sure your budding Hollywood stars know what’s involved in participating – both in content and time spent filming!

You can watch a behind the scenes video of filming ‘The FTF Hunter’ below and read more about the making of the movie at Geocaching-Cottbus.

6. Sort out the Sound

Gasgoose, advises that having a good soundtrack for your film is vital:

Appropriately balanced background music will set the mood for everything that is happening and more greatly captivate the audience.

Lifechooser, from Southampton in the UK, also agreed, stating that they ‘ended up with about 5 sound tracks’.

7. Make a plan, but stay flexible

Cache4kings from Washington, took a trip back in time to trace the history of a piece of swag for their film ‘Trinket or Treasure?‘ Their advice is to have an adaptable timetable:

Make a filming schedule and be organized, especially if you are involving a group of actors and crew […] Make a detailed plan, but be flexible, and have fun!

Lifechooser stresses the importance of keeping the viewer’s attention:

Although 4 minutes doesn’t sound very long – a film is part of a one hour show reel, so you need to keep the audience’s attention.

NaxoMenX from Valencia, Spain shot his film, ‘Traditional’s Experiences’ entirely from the point of view of a cache, documenting what kind of visitors interact with the container. He believes that:

… your film needs to have a message. Each finalist provides the viewers with a thesis that makes them think.

LinedUpLikeLemmings from NYC, created their GIFF entry with ace48, and they used props that fit in seamlessly to numerous scenes:

We also strategically picked props – the bags in the doorman scene were actually necessary to carry the other props from site to site!

Leaving yourself enough time to edit your movie is essential, according to 4 boys explore from Columbus, Ohio:

Once you are done with the filming, make sure you have enough time for editing. It can take longer than expected as you will often come up with new ideas as you are working.

TheWanglers, from Christchurch, New Zealand, advised me that keeping things simple is key:

Big tip is keep film locations to a minimum. The old adage of ‘KISS’ works well too.

13. Just do it (and sooner rather than later)

DNF Hound, based in L.A., procrastinated for too long and missed the 2015 submission deadline. He was a bit more organised in 2016 and started working on his film ‘That’s Not Trash‘ a mere three days before the deadline!

Three days before the deadline I lamented to my wife, “Man, I meant to get that film shot. Now it’s too late.” She said, “You’ve got three days. Just do it.”

His advice is to just go ahead and bring your idea to life, allow it to be imperfect and, “have fun. It will show.” 4 boys explore advise not to wait until the last minute to submit your entry:

Give yourself some time in case your computer crashes or is having trouble uploading it.

Several finalists told me how important it is to just have fun while creating your masterpiece. As Skimbosh from Pennsylvania said:

At the risk of sounding cliche, have fun. It shows through. I have no stats, no degrees to back me up, but I feel that if people can sense you are having fun in your projects, it will transfer on to them and have a positive reaction to what you are presenting.

Below is the link to last year’s finalist films; I think you’ll agree a lot of talent and effort went in to their creations!

If you’re still thinking about submitting an entry for GIFF 2017, I hope the above helps to make your mind up: just go for it! And don’t forget the deadline of 1st August 🙂