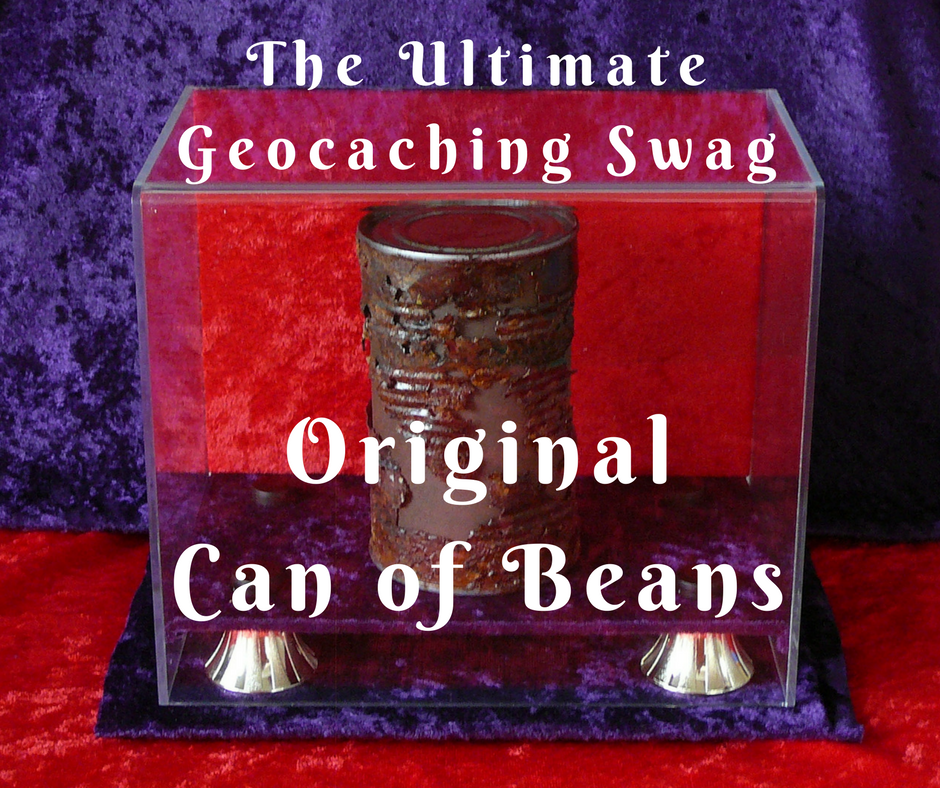 Some people chase storms; other people travel thousands of miles to catch a glimpse of the northern lights, while many geocachers long to set eyes on an old, rusty can of beans. The Original Can of Beans is the ultimate in geocaching swag. First things first, in case you haven’t heard of it, here’s the lowdown:

What is the Original Can of Beans?

Commonly known by its acronym, the OCB is a former can of beans. Or is it? Dave Ulmer, the inventor of geocaching, placed what he described as a ‘can of food’ in the first ever ‘GPS Stash’ in 2000. If you check out this video from his YouTube channel, you can see that he listed the contents of that first hide on the logbook, and the first item on the list is a can of… well, take a look for yourself:

So was it a can of beans or peas? Well, as it turns out Western Family blackeye peas belong to the bean family, so there’s no great conspiracy really. In fact, when the can was unearthed a few years later, Dave Ulmer was there and confirmed that it was indeed the very can he had placed in the first ever geocache.

The Guardian of the Beans

Such an important piece of geocaching memorabilia needs to have a dedicated bodyguard to keep it safe, and the guardian of the OCB is Jeff of Team 360 from Phoenix, Arizona:

…back in 2001 I was browsing around on the internet about gps units and came across Geocaching.com. Of course, back then it was still pretty much an underground hobby and there weren’t too many players. In fact, the closest geocache was 15 miles away, on top of a small mountain but I drove out, hiked the trail, climbed up and found it…it was called ‘Orange Cache‘ and it was GC315.

Finding the beans was an accident, really. Most geocachers have heard of the Original Stash Tribute Plaque, which marks the location of that first ever geocache that Dave Ulmer hid near Beavercreek, Oregon back in 2000. Three years later, there was lots of discussion on the Groundspeak forums about placing a sort of memorial to that first hide, at the original GZ. However, the talks went on for quite some time without anybody taking the plunge, so Jeff decided to take action:

[I] …asked if others would like to contribute and make it a ‘group effort’ to get a memorial plaque created and put into place. Several geocachers realized the importance of the idea and after collecting donations and a final group consensus on the design, I had the plaque cast here in Phoenix and then I flew up to the Portland area.

Team 360 were accompanied to the spot by Dave Ulmer and Makaio (one of the finders of the original stash), and both confirmed the exact location of the original cache so the plaque could be set in the correct place:

As I cleared out the area to frame and pour the concrete base, the shovel made a metallic sound and out of the ground came the Original Can of Beans!

The first GPS stash was in fact almost entirely buried, with just its lid sitting above ground.

An Oregon Road Maintenance Crew came by with their lawnmower and damaged it, allowing rain to get in. As you can imagine in the Pacific Northwest, it didn’t take long for the bucket to fill up and just a short time later, Dave Ulmer came back to retrieve the geocache, took most everything out of the bucket and then poured the water back into the hole. Well, the Can of Beans was still in the bucket and went out with the water, where it stayed in the hole for two years until I recovered it at the site.

There were actually some blackeye peas still in the can when Jeff found it, but since he wasn’t allowed to bring food through airport security, the can was thoroughly washed out before he brought it back to Arizona, and the remaining ‘beans’ went down a sink in Oregon.

After bringing the can home, Jeff set about working to try and preserve it from further decay, treating it with rust stopper and UV-resistant polyurethane sprays, in order to treat and protect it.

The OCB is now trackable and travels with Jeff to events all over the world, having so far visited various locations in the US, as well as France and Austria. Jeff tells me that the OCB consistently draws big crowds:

I always enjoy seeing how much excitement it generates, geocachers have even hit the ground and started praying to it (all in good humor).

When the OCB went to a mega event in France in 2011, a small piece of the metal flaked off and was subsequently presented to the French geocaching community:

They’ve made it a ‘Geocaching Holy Icon’ in its own right, it’s now framed and displayed at events over there now. On the latest trip back to France last August, the O.C.B. was displayed at the EuroGeo 2016 Event along with Dave Ulmer, the only Event where they appeared together. You can imagine the craziness! It was a huge success.

The OCB has even made it to the small screen when it was featured on the Travel Channel’s Mysteries at the Museum. The episode was called ‘The Birth of Geocaching’ and aired in April 2016.

How to catch a glimpse of the ‘Holy Grail’ of geocaching

In May 2018, the OCB will travel to GeoWoodstock in Ohio and will be making its last ever appearance at the UK Mega 2019 in Aberdeenshire, Scotland, before being permanently retired. If you haven’t already discovered this piece of geocaching history, make sure to get yourself to one of the above mega events before it’s too late!

Have you had the chance to see the ultimate in geocaching swag? Where did you see it? Let me know in the comments!

Huge thanks to Jeff from Team 360 for talking to me about the OCB and for sharing his photos!