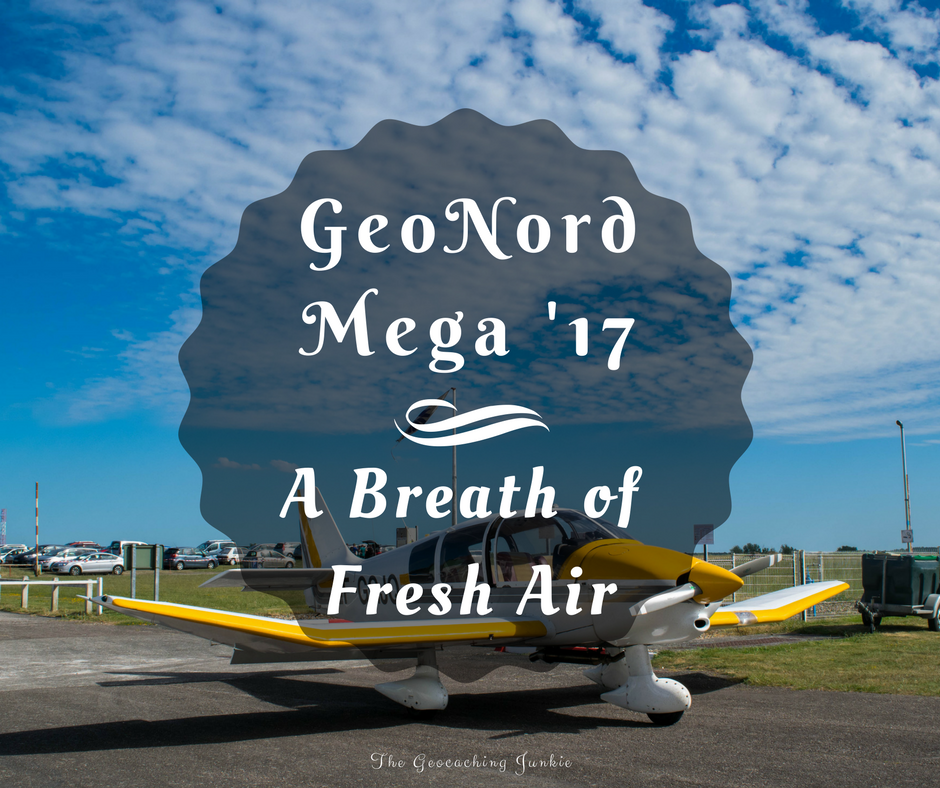 “Where are you off to next?”

It can certainly feel like I’m never at home sometimes, but as much as I occasionally think I’d like to just sit and do nothing for an entire week, the yearning to see and experience new things still runs too deep to utilise my holidays and weekends just lounging around. Bearing that in mind, we had one weekend in June that was looking a bit blank in the calendar, so when I was invited to the GeoNord Mega in France, I thought “why not?”.

The only issue is that between the upcoming wedding and honeymoon, we don’t have many days off from the office left, so our only option was an early morning flight out on Saturday and a Sunday night flight back. We flew to Brussels at 6:30am (4:45am is an unnatural time to be queueing at security in Dublin Airport!) and after picking up a rental car, we were soon on our way to Helfaut in France!

The mega took place at Saint-Omer Wizernes Airfield, an aerodrome with a fascinating history. The Royal Flying Corps (the air arm of the British Army before it joined with the Royal Naval Air Service to form the Royal Air Force) established a base there during the First World War, and had over 4,000 personnel in place.

The GeoNord mega events are based around the four elements: in 2015, the theme was earth; in 2016, it was water and this year, it was air. What better place to hold the event then, than at an aerodrome! The whole mega – from the logbook to the lab caches to the side events all fit in perfectly with the chosen theme.

From a Boeing 737 to a single-engine…

The mega team organised the opportunity to see the area from the air, or even take part in an aerobatic display! I wasn’t entirely convinced my stomach could handle the aerobatics, so we booked the plane tour instead, which cost €40 each for 15 minutes.

As soon as we arrived and checked in, we were sent to book in for our flight. I assumed we’d be given an appointment time to return at but as it turned out, they could take us straight away. No time to think about it too much and get nervous!

It was exhilarating! The muggle graciously let me be co-pilot so I sat upfront and enjoyed the best views over Saint-Omer and the surrounding countryside. It was undoubtedly an experience I won’t forget any time soon.

GeoNord was my 9th mega/giga event so I’ve done a reasonable number of lab caches already. These labs were some of my favourites – it can’t be easy to create 20 fun and innovative tasks that fit in with the air theme but the organisers managed to ace it.

We spent most of our time at the mega location completing the lab caches, although there was a few we missed. Testament to how great they were was the fact that the muggle tried his hand at most of them – it usually takes some coercion to pique his interest in anything geocaching related!

A tour of the enormous World War II bunker, Blockhaus d’Éperlecques, was organised for the evening of the mega event. We had reserved tickets but had to put our names down for a tour when we arrived at the mega. I was dismayed to hear the earliest time left was 23:40!! We had been awake since 3:30am and I don’t do well with lack of sleep but we had to make the most of our time so needs must!

When we arrived at the location after 11pm, I was further shaken to hear our tour was delayed until 00:20. We then discovered the tour was in French and the only English tour had been at 9pm. I could have let this whole experience overshadow the amazing day we’d had so far but we enjoyed the tour as best we could, considering we understood basically nothing of what was being said.

It was still an amazing place to walk around and even inside and, of course, I have read about it since returning home so now have some context as to what we were seeing. The bunker was built by the Nazis under the codename Kraftwerk Nord West and was intended to be a launching pad for the V2 ballistic missile.

The facility was constructed using the labour of thousands of prisoners of war. It was never actually used for its intended purpose as British and French air strikes rendered it unusable.

Despite not understanding the dialogue, it was nevertheless a great experience to walk around the bunker in almost complete darkness. There were specially-placed night caches in the area but we didn’t leave the bunker until almost 2am so it was straight to bed!

On Sunday, we attended the goodbye event, Lights Out, at La Coupole, literally translated as ‘the Dome’, and so-called because of the huge concrete dome just visible above the trees. La Coupole is a more developed version of Blockhaus d’Eperlecques and was constructed in a disused chalk quarry.

Although a more developed bunker, it was also never built to completion and not used for its intended purpose of launching V2 missiles. After it was captured by the allies, it was partially demolished at the behest of Winston Churchill, who feared La Coupole could be used as a military base in the future.

The exhibitions inside La Coupole cover the production of the V2 missiles, how life was in occupied France and also the conquest of space after the war. There is even a V2 rocket on display in the museum.

It was really fascinating but also poignant to visit La Coupole. This whole area of north eastern France has such an interesting history and the mega organisers opened our eyes to this by having events at these locations.

A Breath of Fresh Air

Despite the fact that we found only a few geocaches over the weekend, I can still safely say this was the best mega experience I’ve had to date. The location was amazing and the side activities were so well thought out. I am only sorry I missed earth and water, but I hope to make it to fire next year!

Meeting great people, experiencing new things and finding a few smileys in to the bargain made for a pretty great mega experience. I can’t wait for next year.

What’s the best mega you’ve ever attended and why? Let me know in the comments!

6 thoughts on “GeoNord Mega 2017: A Breath of Fresh Air | The Geocaching Junkie”