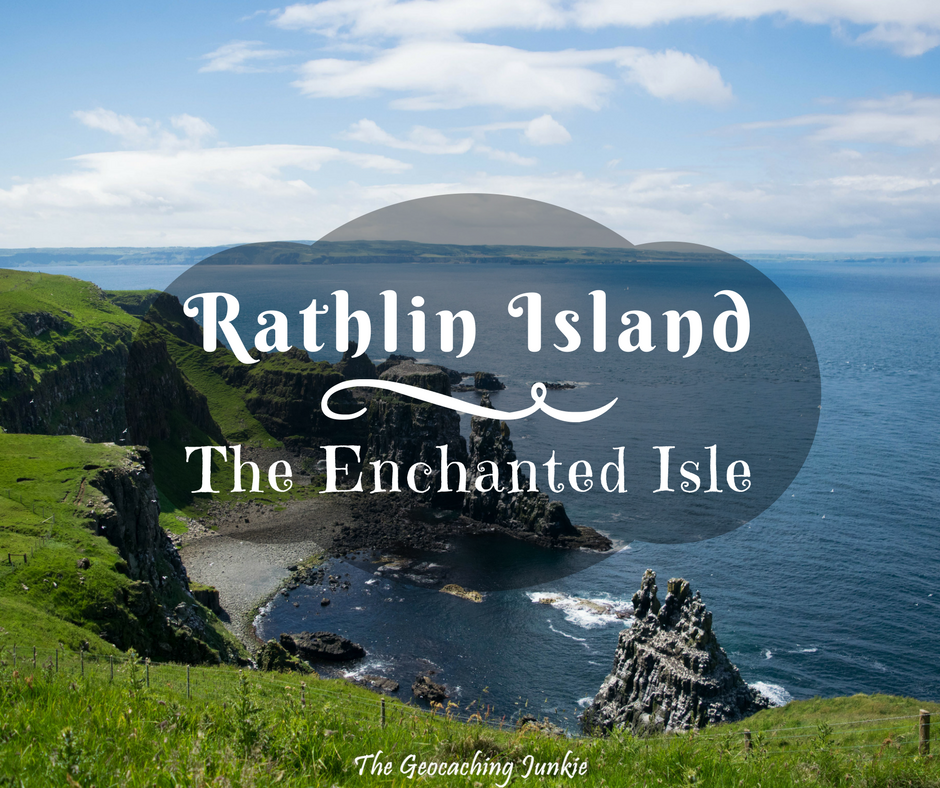 2017 is the third year I have hosted an event on an island. There are hundreds of islands off the island of Ireland, so the location options are seemingly endless. In 2015, I hosted an event on Dalkey Island, located just 300 metres from the mainland off Dublin and it was a great success – James Bond even attended! Last year, a smaller group ventured out to Great Saltee Island off the coast of Wexford in stormy conditions and we got to within touching distance of some puffins.

While seeing the magical birds up close was a bucket list item ticked off for me, it also made me want to photograph them again, so when planning this year’s event, the presence of puffins was the top criteria that had to be fulfilled. On a sunny but cold day in January, I went to Rathlin Island with cep99 and peacockealot to resuscitate a cache that hadn’t been found for over 600 days and fell in love with the place. The island is also home to puffins when they’re nesting so it was really a no-brainer to host the event there in the summer.

To Rathlin’s Isle I chanced to sail…

The ferry for Rathlin leaves from Ballycastle on the north Antrim coast and costs £12 per adult return. The journey to the island is just 6 miles, across the Straits of Moyle, where the Irish Sea meets the Atlantic Ocean.

The Mull of Kintyre in Scotland is just 11 miles from the island and it has been at the centre of an ownership dispute on many occasions. In 1617, the dispute was eventually settled using a simple test involving a snake. Since Saint Patrick had banished all snakes from Ireland, the survival of one introduced to the island would determine if it belonged to Ireland or Scotland. The snake died and Rathlin was declared to belong to Ireland. 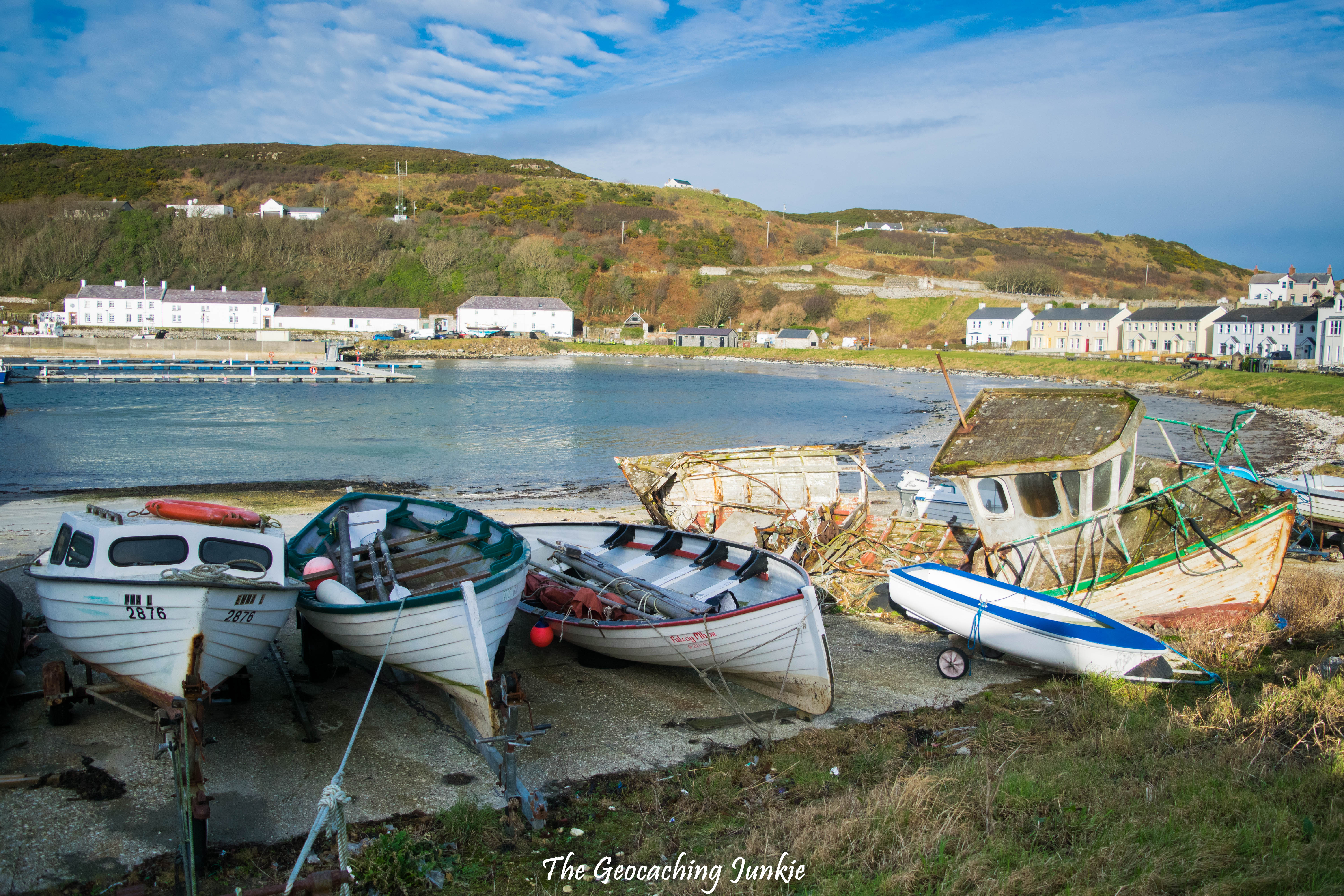 The island has a long and sometimes brutal history. The first inhabitants of Rathlin are thought to have arrived from Scotland in around 6,000 – 5,000 BC. According to the Annals of Ulster, the first Viking raid on Ireland was on Rathlin in 795, during which the church was pillaged and many buildings burned. 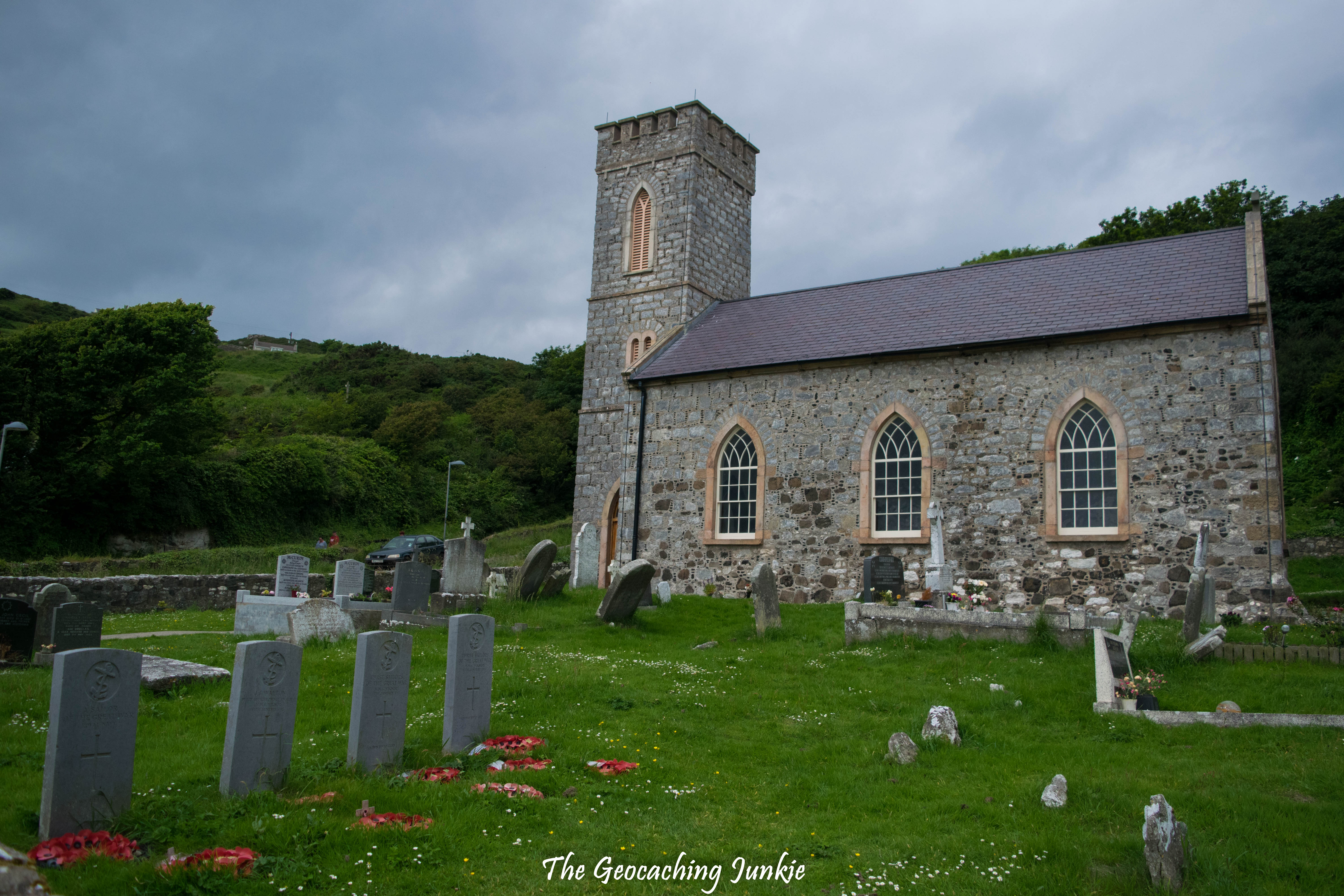 Robert the Bruce, the famous Scottish king, sought refuge on the island in 1306 after being defeated by the English in Perth. In 1987, Richard Branson crashed his hot air balloon off the island’s coast after his record-breaking trip across the Atlantic. Branson donated £25,000 to the islanders for rescuing him from the sea. From Robert the Bruce to Richard Branson: Rathlin certainly has a long and varied history!

I set the event location to just outside the Rathlin West Light Seabird Centre in the west of the island. During the summer, there are ‘puffin buses’ waiting at the harbour to take birdwatchers to the centre as soon as they step off the ferry. We took Bert’s Puffin Bus and it cost £5 per person for a return ticket (a single fare wasn’t an option!).

Bike rental is available from Soerneog View Hostel or you can bring your own bike on the ferry for a cost of £3.20 return. There is also the option to walk to the centre, which many people did. It’s a 4 mile walk each way and it’s quite hilly – I was glad we didn’t walk when the mini bus struggled up and down the hills. We were able to bring the dog on both the ferry and the bus, which was great – his little legs would not have taken that walk! 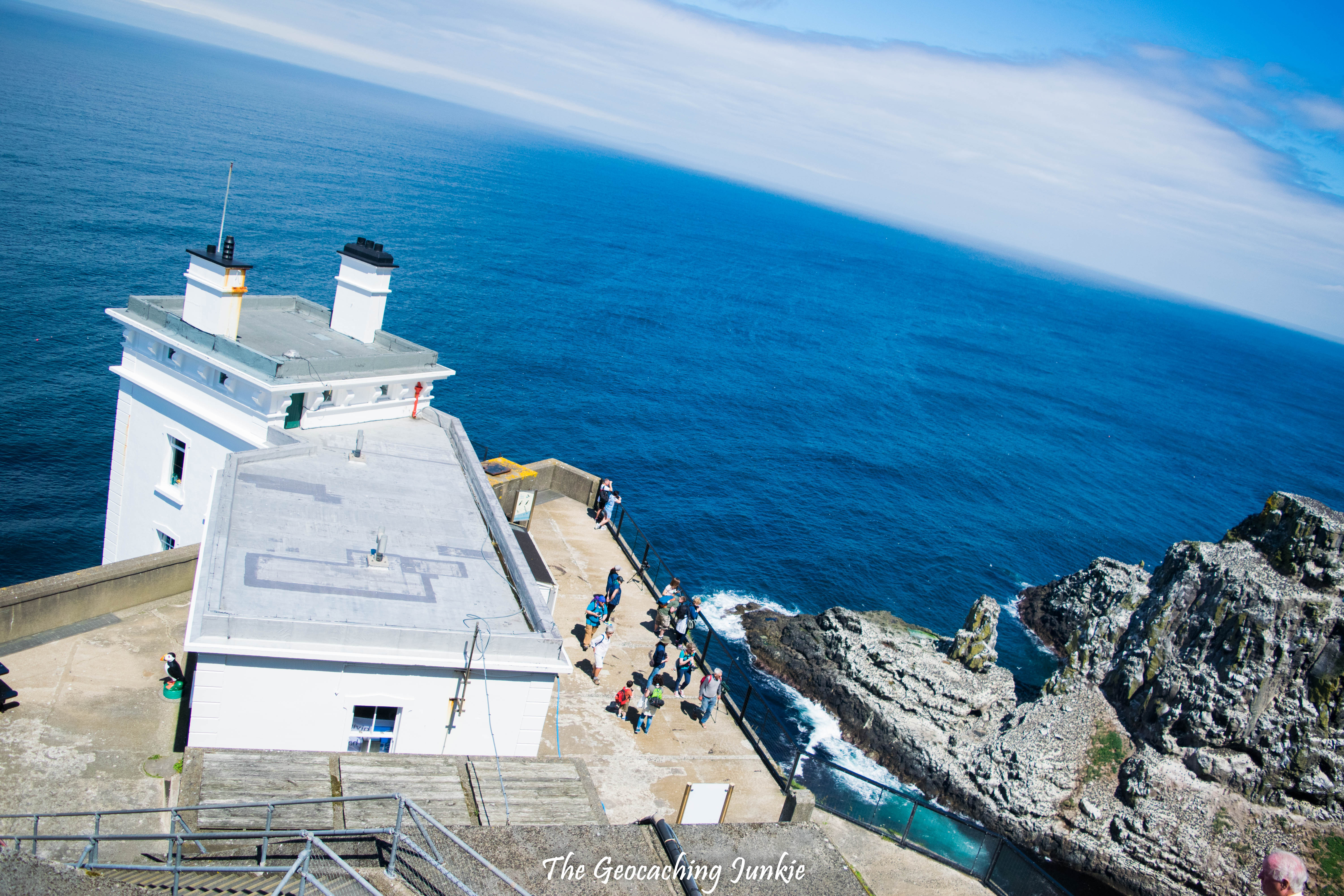 The centre is run by the Royal Society for the Protection of Birds (RSPB). It costs £5 per person to access the viewing platform close to the cliffs with thousands of nesting seabirds. There are 89 steps down to the platform and RSPB volunteers are on hand to help you identify the puffins using binoculars and telescopes.

I think we were a little spoilt on Saltee Island last year, where the puffins are so close you can practically reach out and touch them, so when we reached the viewing platform and were greeted by a haze of black, white and grey, as opposed to a plethora of orange beaks within spitting distance, I wondered were we in the right place. 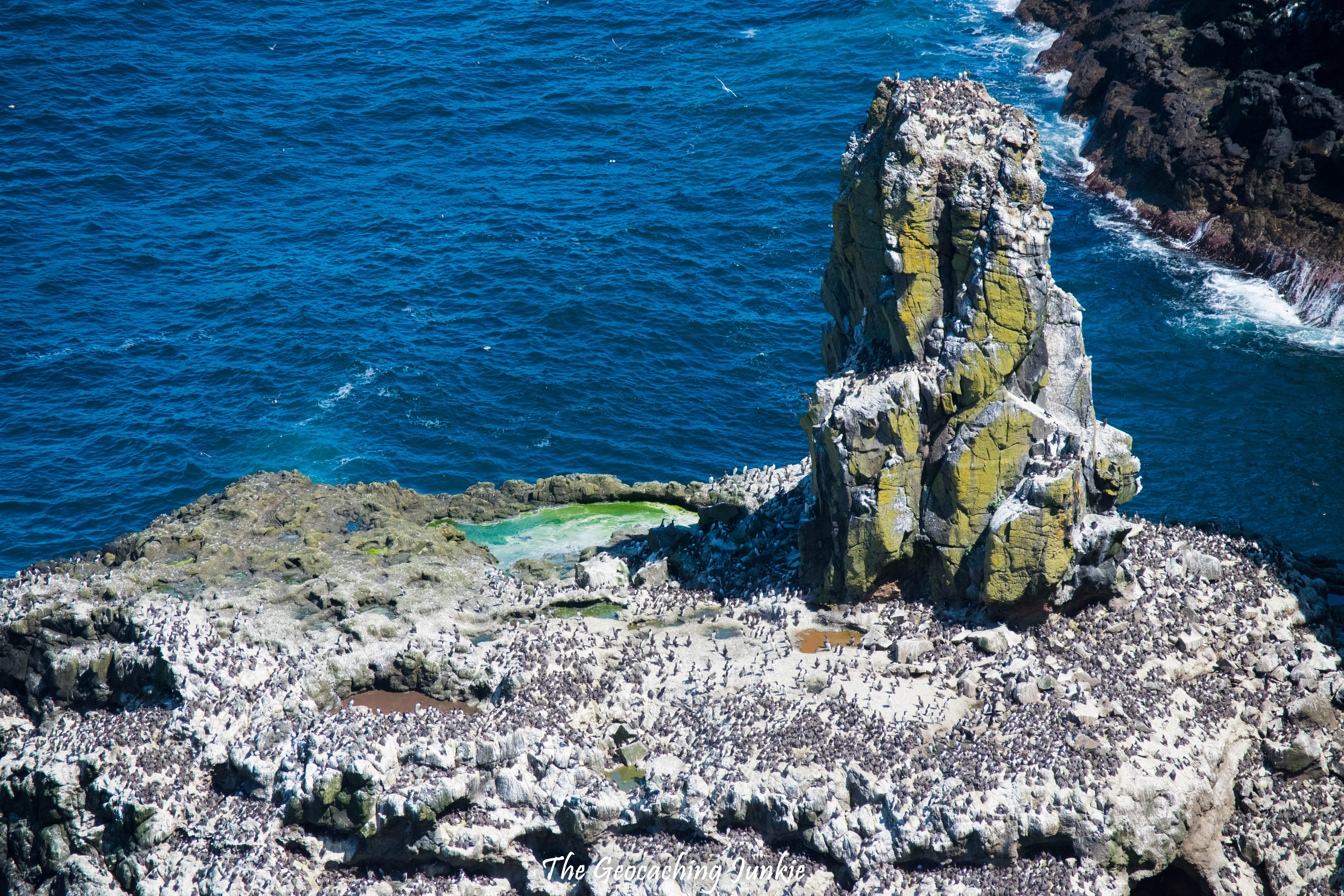 There are indeed puffins here but the position of their favoured nesting grounds means that getting close is not an option. With the help of binoculars and a telescope, we were able to see where they were positioned and I got a few pictures, although my 55-200 mm lens struggled to get a good snap.

The seabirds are not the only attraction at the RSPB centre: the viewing platform is situated to the side of Ireland’s only ‘upside down lighthouse’. The light of the West Lighthouse unusually sits at the bottom of the building.

I was pleasantly surprised by the number of attendees we had in the end: 22 signatures in the logbook. Some got the puffin bus, some walked and others biked – much respect to the walkers and cyclists because those hills looked torturous!

After much cake and chat was passed around, we parted ways and our smaller group boarded the puffin bus back to the harbour. We had some time before we had to get the ferry, so some caches were found and more sights of the island were taken in – there are amazing views everywhere! 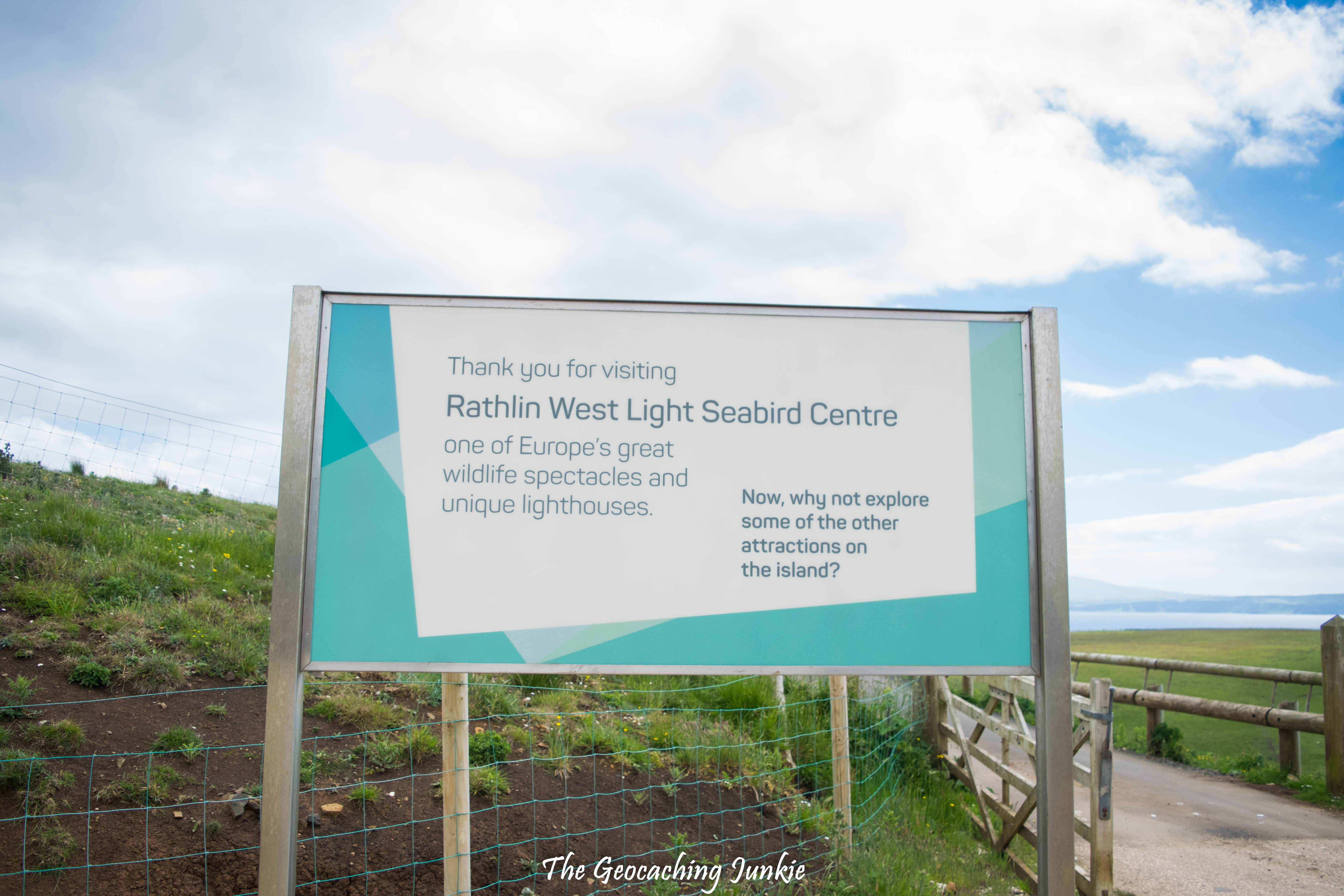 When we visited in January, it was the many grey and common seals lounging near the shore that had my camera clicking. This time around, they weren’t in the same place and we didn’t see as many but they were there nonetheless. 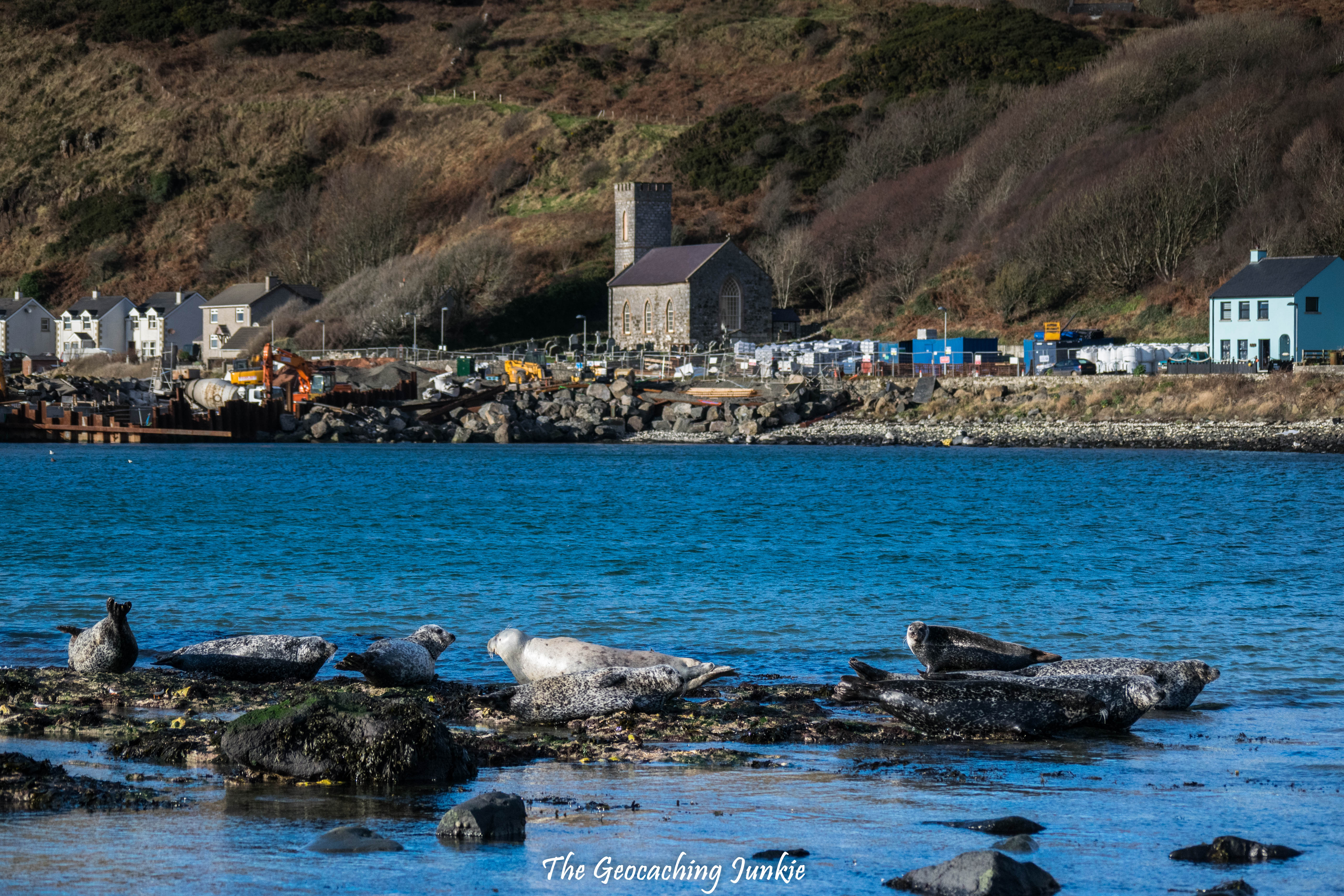 The shallow waters and sea caves are ideal breeding grounds for the seals and they thrive on Rathlin. They are well used to having their photographs taken and will let you get quite close to their sun bathing spot.

The production of kelp on Rathlin became important in the 18th century, and remained so until the 1930s. At one point there were 150 kilns in operation on the island. The ruin of a kelp house sits not far from the harbour, and of course, there’s a geocache hidden there! 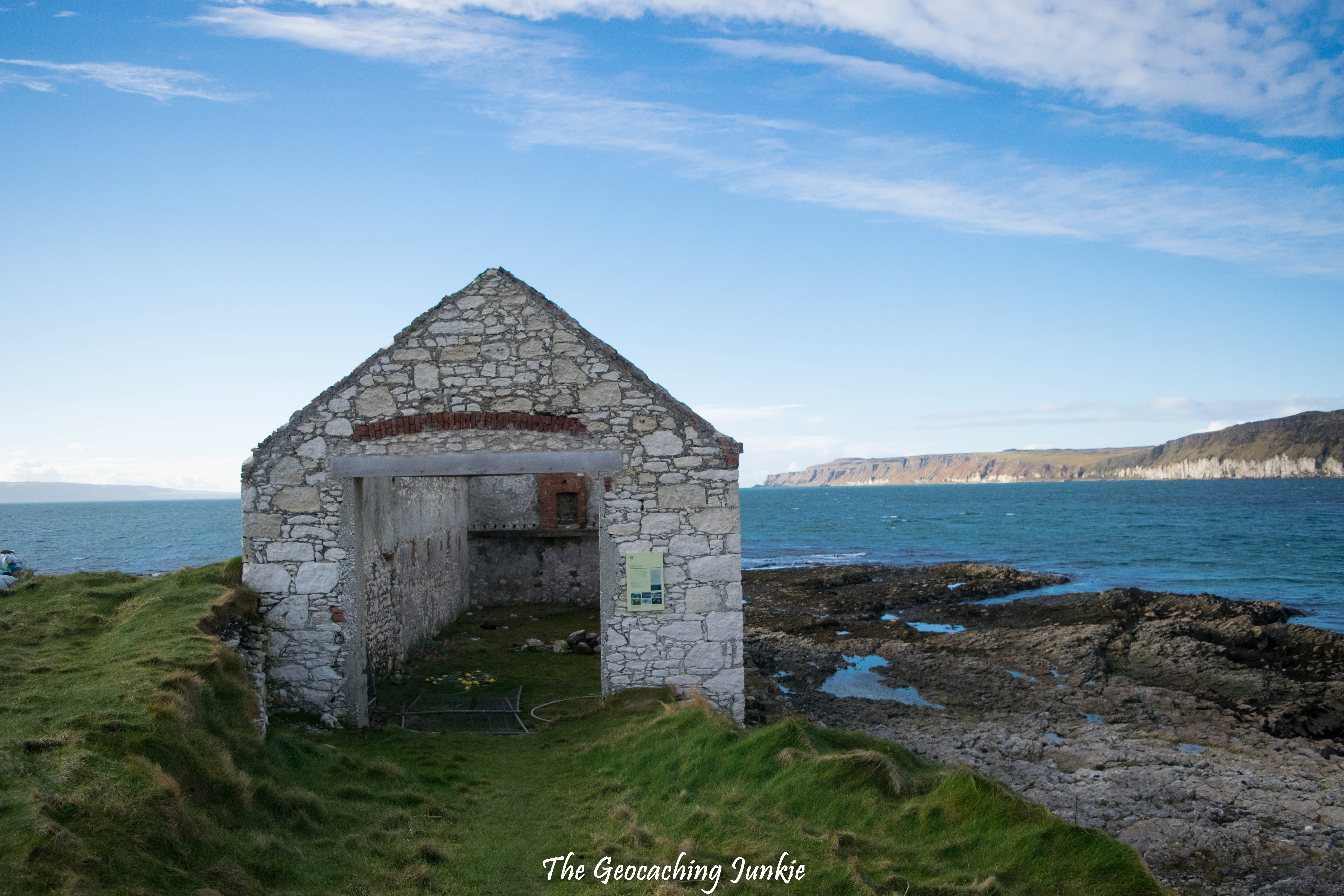 An imposing granite throne sits along the seafront at Mill Bay, inscribed with a quote from Irish poet Seamus Heaney‘s Squarings. A list of writers who have visited Rathlin is engraved on the back. 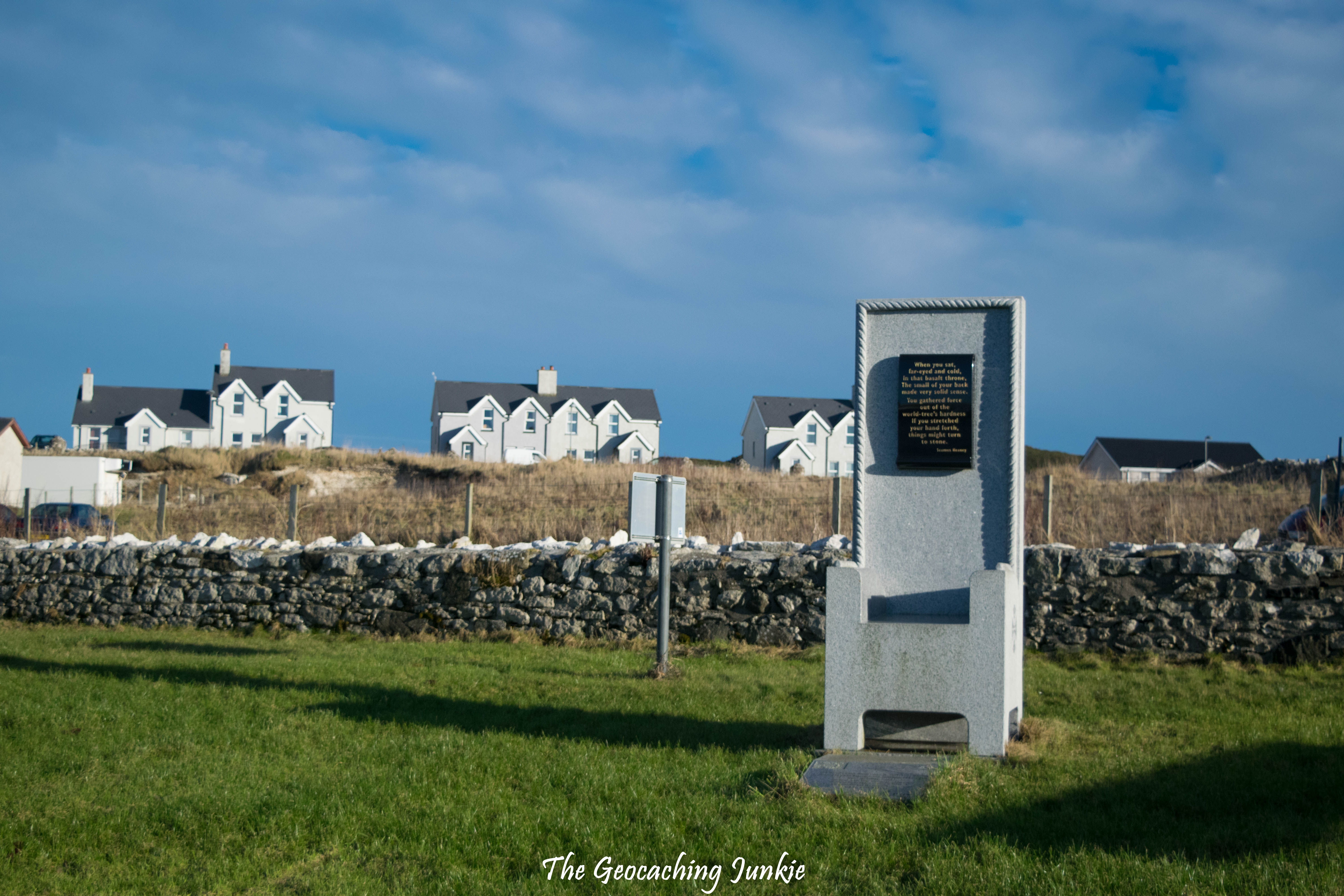 Of course, I had to have a sit in the chair, in the hopes some writers’ inspiration will rub off on me. Rathlin is certainly a place to be inspired: every corner of the L-shaped island affords breathtaking views and its fascinating history could undoubtedly sow the seeds of a story or two. 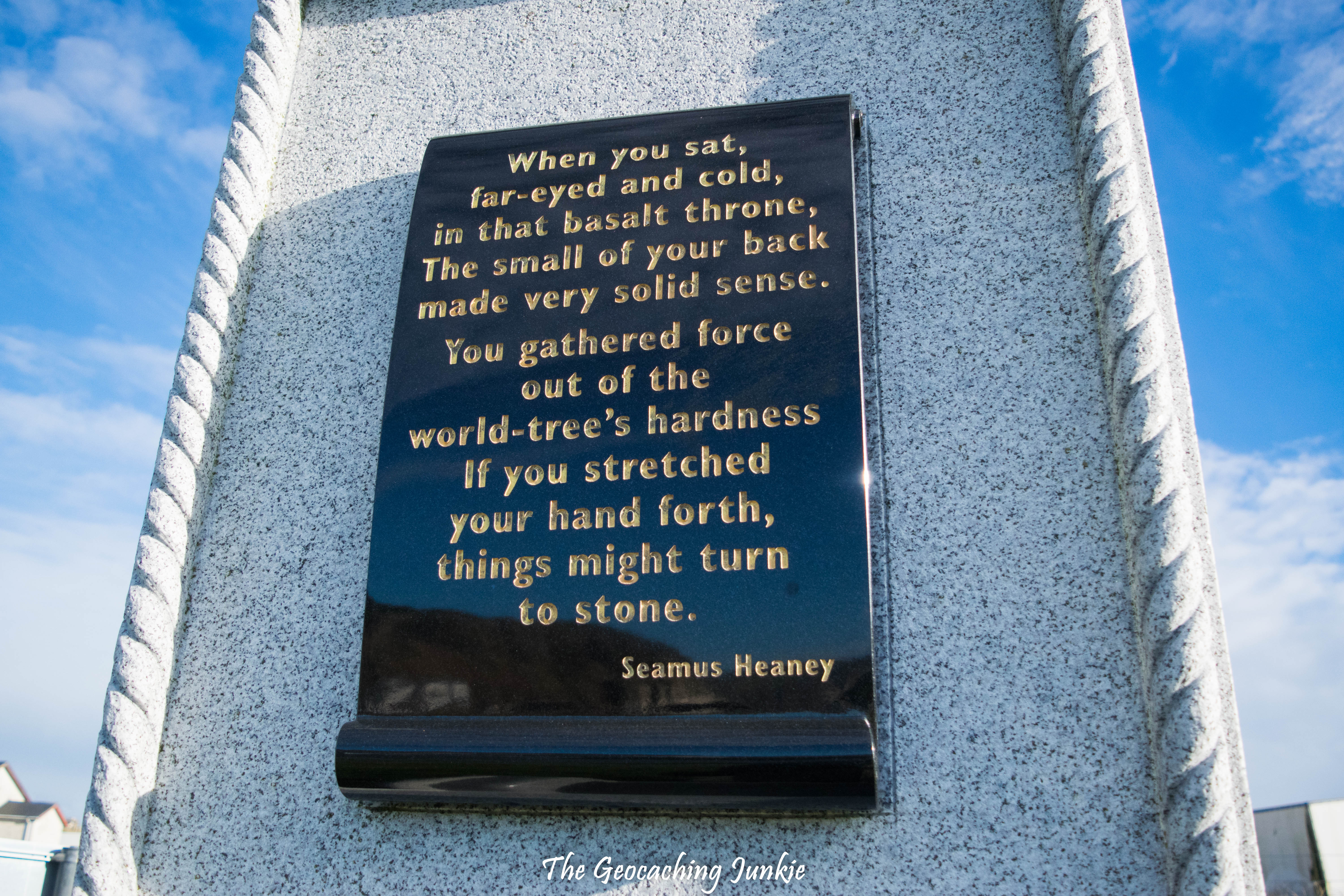 All too soon it was time to go, but not before enjoying some salt and chilli squid at McCuaig’s Bar and ducking in to Breakwater Studio to pick up a handmade souvenir. There are more geocaches to be found on the island, and maybe next time we’ll stay the night to really explore it from top to toe. 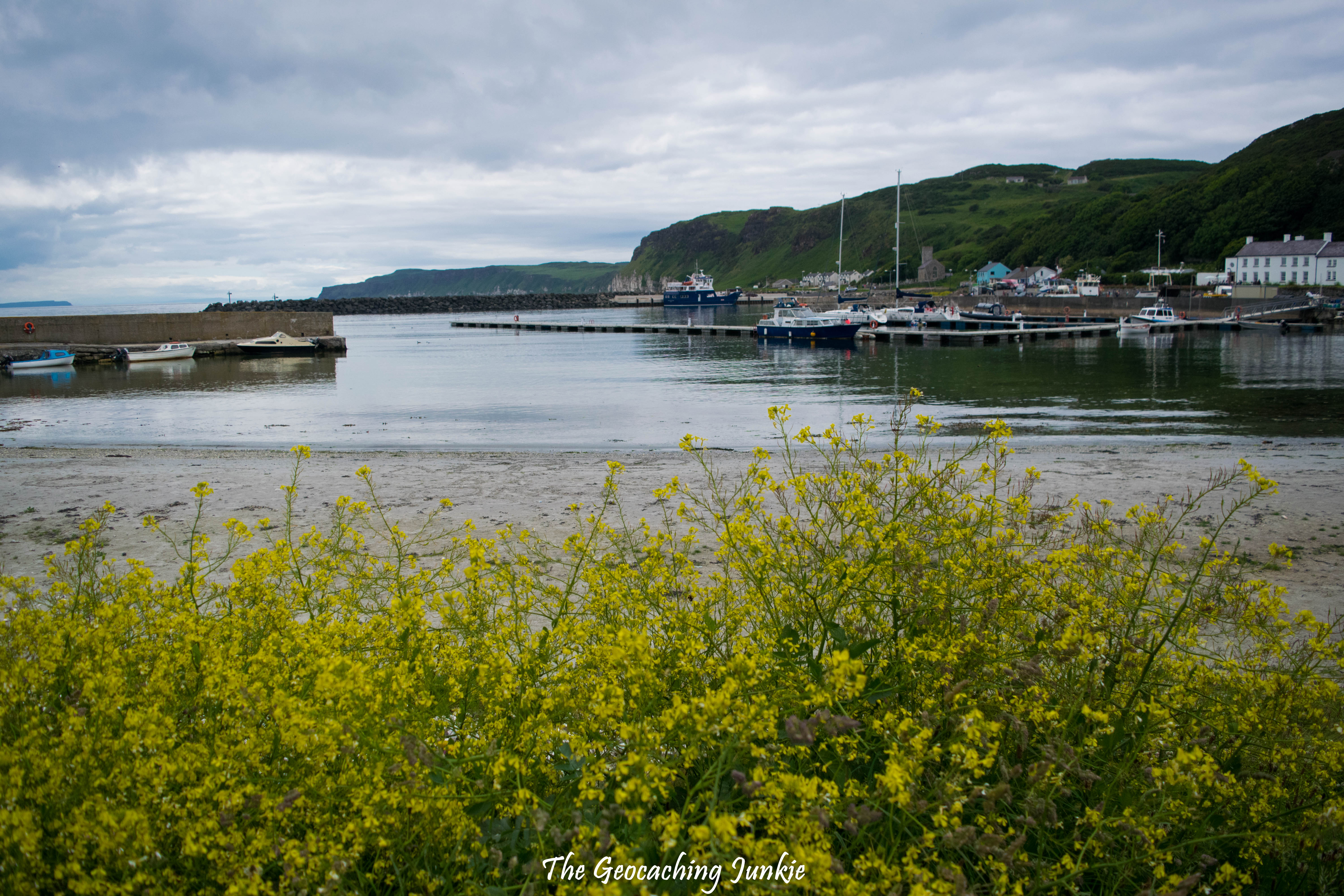 I had a little travel companion with me on my Rathlin geocaching adventure: Moose Willis! Mountain Warehouse are running a summer geocaching promotion* and are giving away a range of prizes including 2 flights to anywhere in the world and £100 worth of MW goodies. All you have to do is pick up a free trackable in a participating store, take its photo when you’re on a geocaching adventure and share it on Facebook, Twitter, Instagram or Pinterest with the hashtags #MWGeoTrail and #contest.

What memorable geocaching adventures have you been on so far this year or what do you have planned? Let me know in the comments!

* Mountain Warehouse have asked me to help promote this contest and have kindly offered to send me some MW merchandise as a ‘thank you’. This is a great competition that doesn’t cost a thing to enter, so I would have let my readers know about it anyway 🙂

7 thoughts on “Rathlin Island: The Enchanted Isle | The Geocaching Junkie”