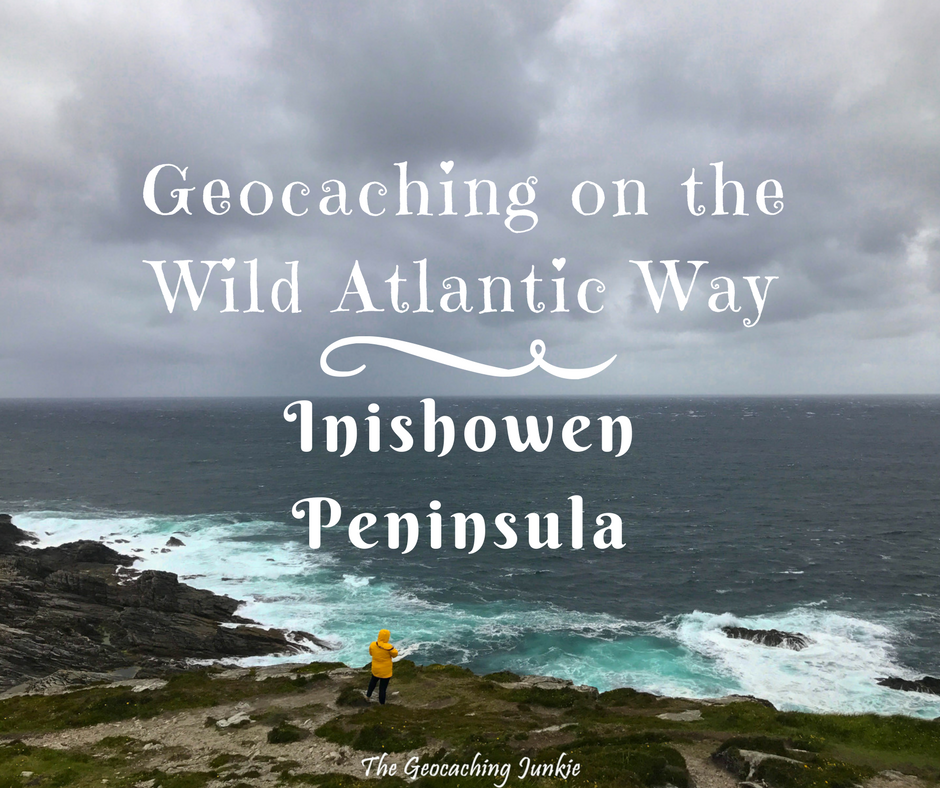 Donegal has always been one of those counties that I heard was amazing, but it was never really on the top of my destination bucket list. I usually favoured going further afield – outside of Ireland – if I had a spare weekend. That all changed, of course, when I started geocaching! I have now been to Ireland’s most northerly county on three separate occasions and I can’t wait to go back again. 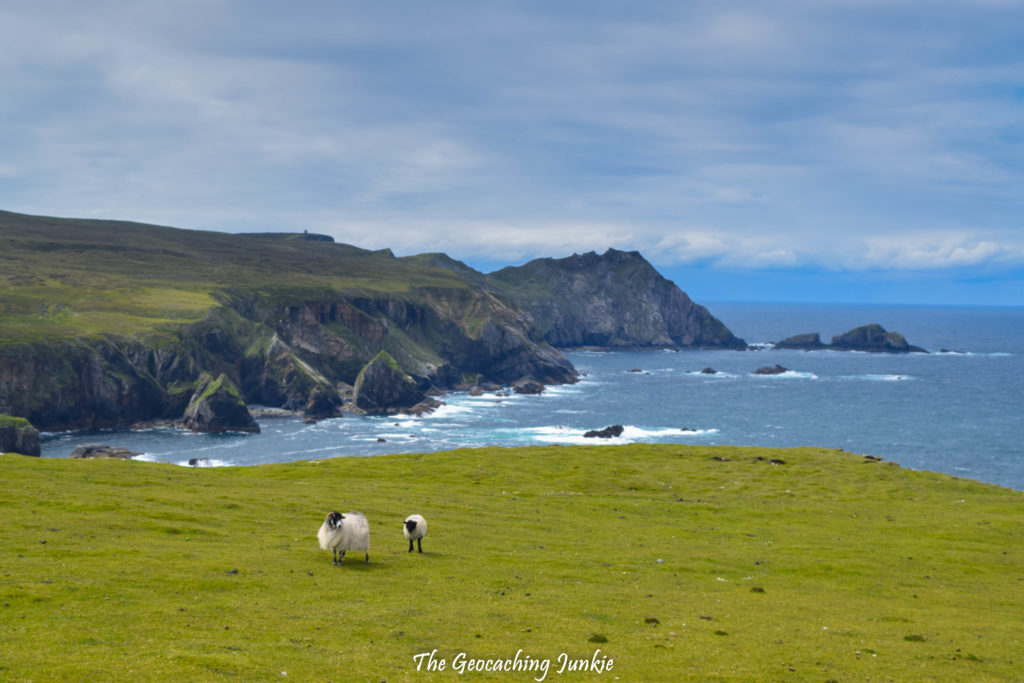 Donegal is as beautiful as they say: it’s all wild Atlantic coastline, golden sandy beaches that stretch for miles, rolling fields of green and charming hidden waterfalls. Last weekend, the muggle and I headed to the Inishowen Peninsula, at the most northerly point of the island of Ireland’s mainland, for some geocaching and sightseeing.

The most northerly point of the peninsula is the headland known as Banba’s Crown. Named after Banba, the Celtic Goddess of the spirit of Ireland and one of the Tuatha de Danaan (‘tribe of the goddess Dana’). There is limited room for parking here but we managed to find a space and leave the car.

The headland is absolutely wild. The wind whipped my hair around my head and I had to zip up my jacket as I was afraid I might lift off at any moment. We went straight to find the geocache here – Ireland’s most northerly cache (GC1AH9H) – where we could have a seat and enjoy the rugged landscape of the cliffs below us.

Ireland already featured in Star Wars: The Force Awakens when Skellig Michael in county Kerry made an appearance, and Malin Head is set to appear in the upcoming instalment of the franchise. There was lots of buzz when the Millennium Falcon perched on one of the cliffs here in May 2016. The latest movie featuring the Inishowen Peninsula will not be released until the end of 2017, but Star Wars fever is already spreading fast.

The popularity of tours to Skellig Michael has sky rocketed since The Force Awakens was released and I imagine visitors to Malin Head will increase exponentially when it features in the upcoming movie. Having now been to both, I can recommend both as amazing places to visit, whether you’re a Star Wars fan or not. 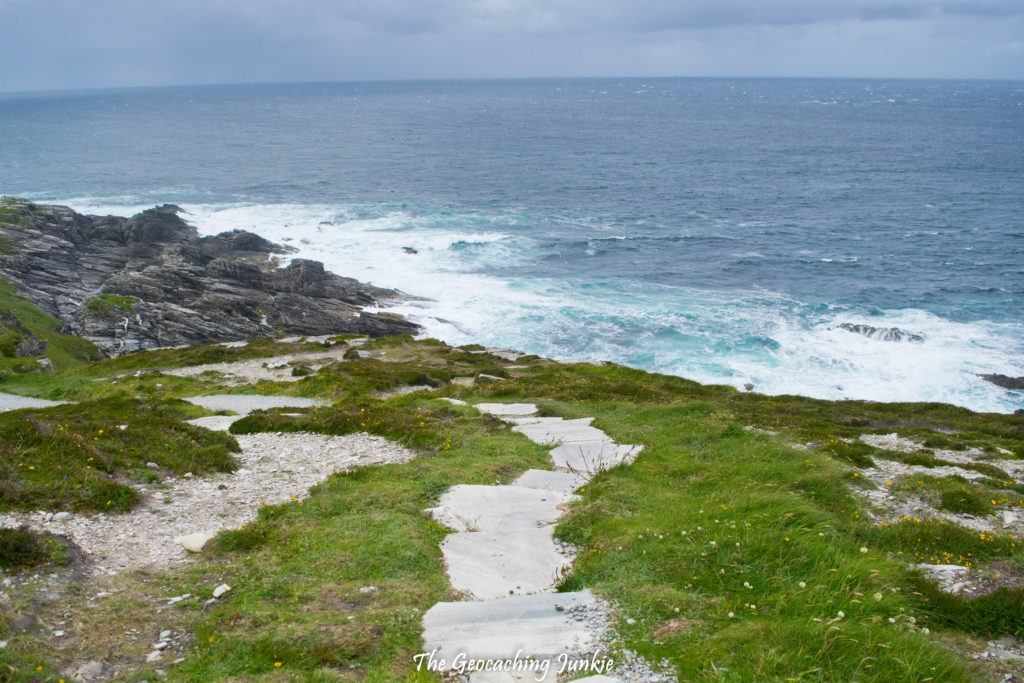 Italian native Guglielmo Marconi, credited as being the inventor of radio, has a long history with the north coast of the Emerald Isle. In 1898, Marconi and his assistant George Kemp carried out radio transmission tests to Rathlin Island from a cottage 3 miles from Ballycastle. In 1902, the Marconi Company successfully sent the first commercial wireless message from the Lloyds Signal Tower at Malin Head to the S.S. Lake Ontario. 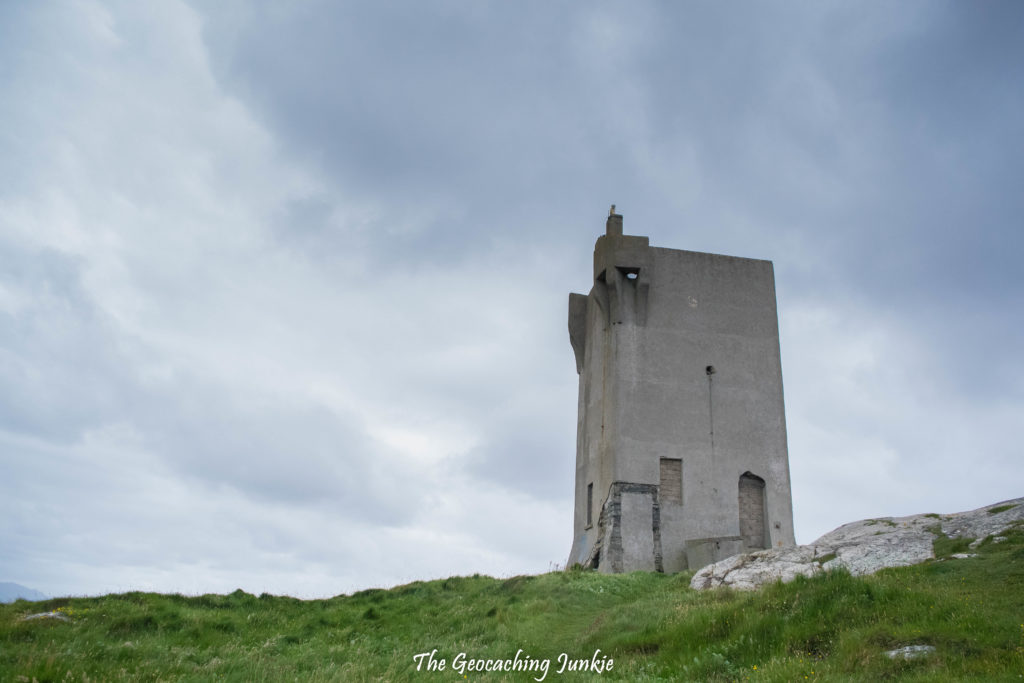 The tower was actually built in 1805 to record the movements of all ships around the route. During World War II, prefabricated coastal watching posts were erected near look out towers located on various Irish headlands; the ruin of the Malin Head post remains to this day. 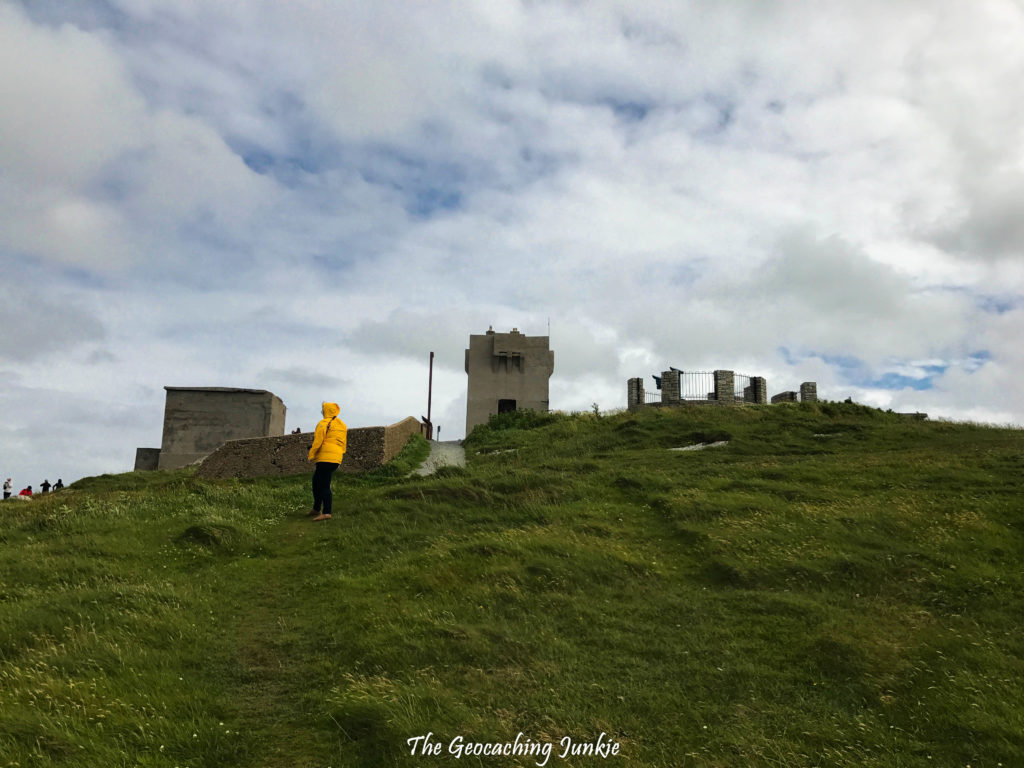 Our next stop was an EarthCache a few kilometres south of Banba’s Crown. After driving down an impossibly steep hill, we arrived at a secluded pebble beach with several sea stacks being thrashed by the wild Atlantic. 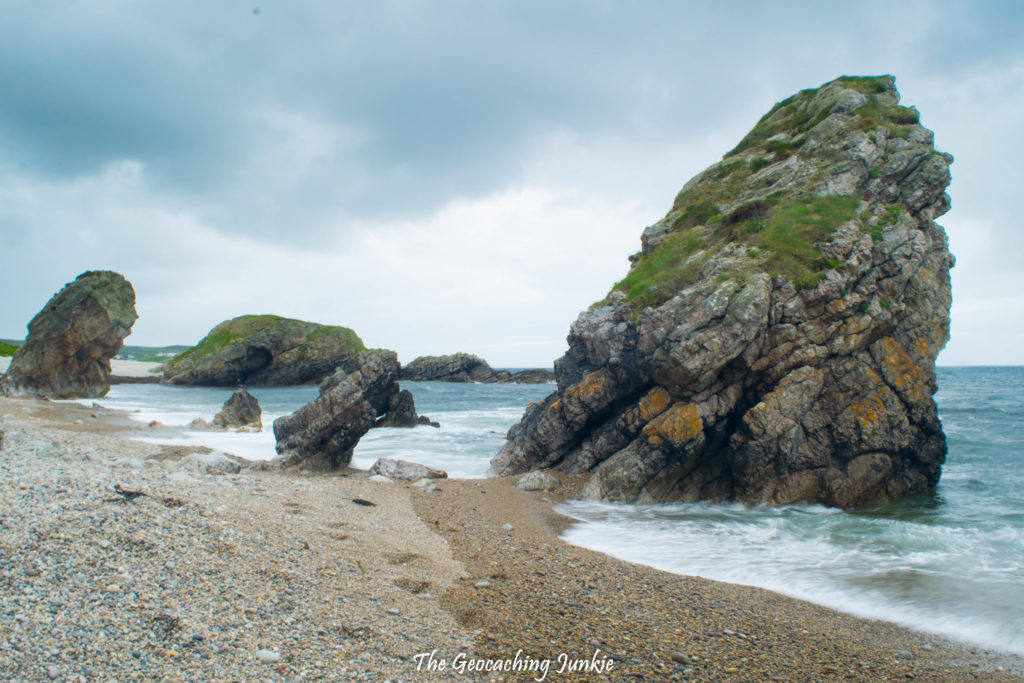 We headed straight inside the gates to the ruin, assuming this was the ‘wee house’, however I was instantly sidetracked by an adjacent cave adorned with hundreds of stones from the beach, inscribed with messages and prayers.

The cave is in fact the ‘Wee House of Malin’ and the church ruin is, well, what remains of a church, which was said to have been built as early the 16th century by Saint Muirdhealach (I have not a clue how to pronounce that!). Legend has it that no matter how many people entered the cave, there was always space for one more person. 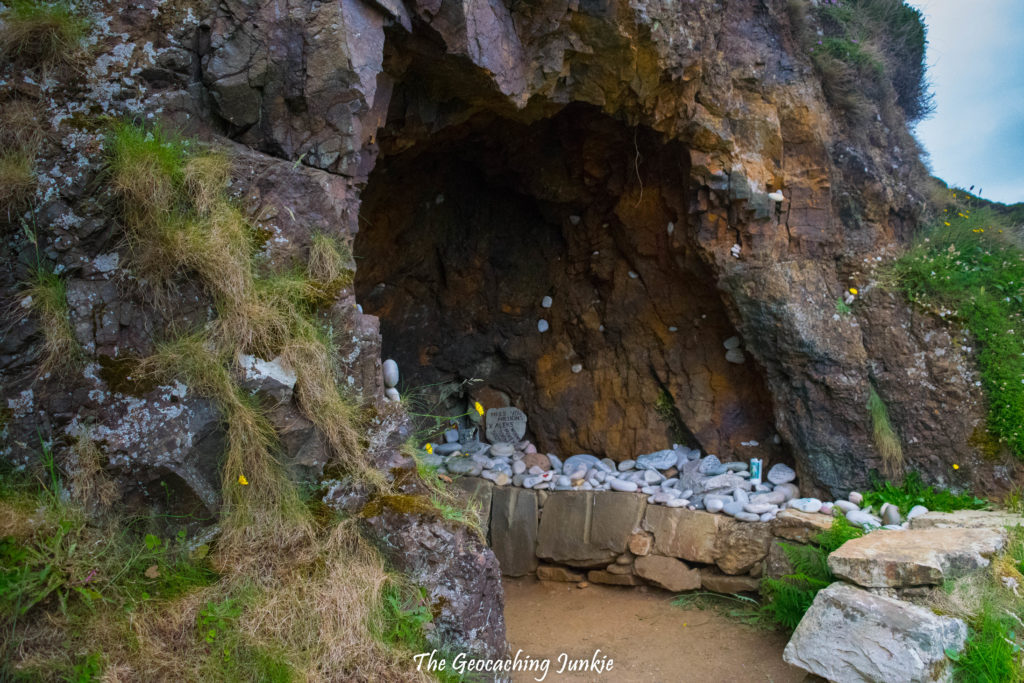 While the ‘Wee House’ is what brings visitors to this spot, the real find for me was the beautiful beach. Sure, it doesn’t have golden sands like many other beaches in Donegal, but it is wild and rugged, and best of all: virtually deserted, and I just loved it.

There is a nice EarthCache at the beach, as well as a traditional cache which we failed to find despite several attempts – it’s a definite contender for the best cache I never found!

The Wee House of Malin, GC1EYPM

Golden beaches may not be the first thing that springs to mind when you think of Ireland, but we have some pretty amazing coastline here. They might not all be the type of beach you can sunbathe on, or even swim at, but the sand can be soft and golden, and the sea a gorgeous shade of turquoise. 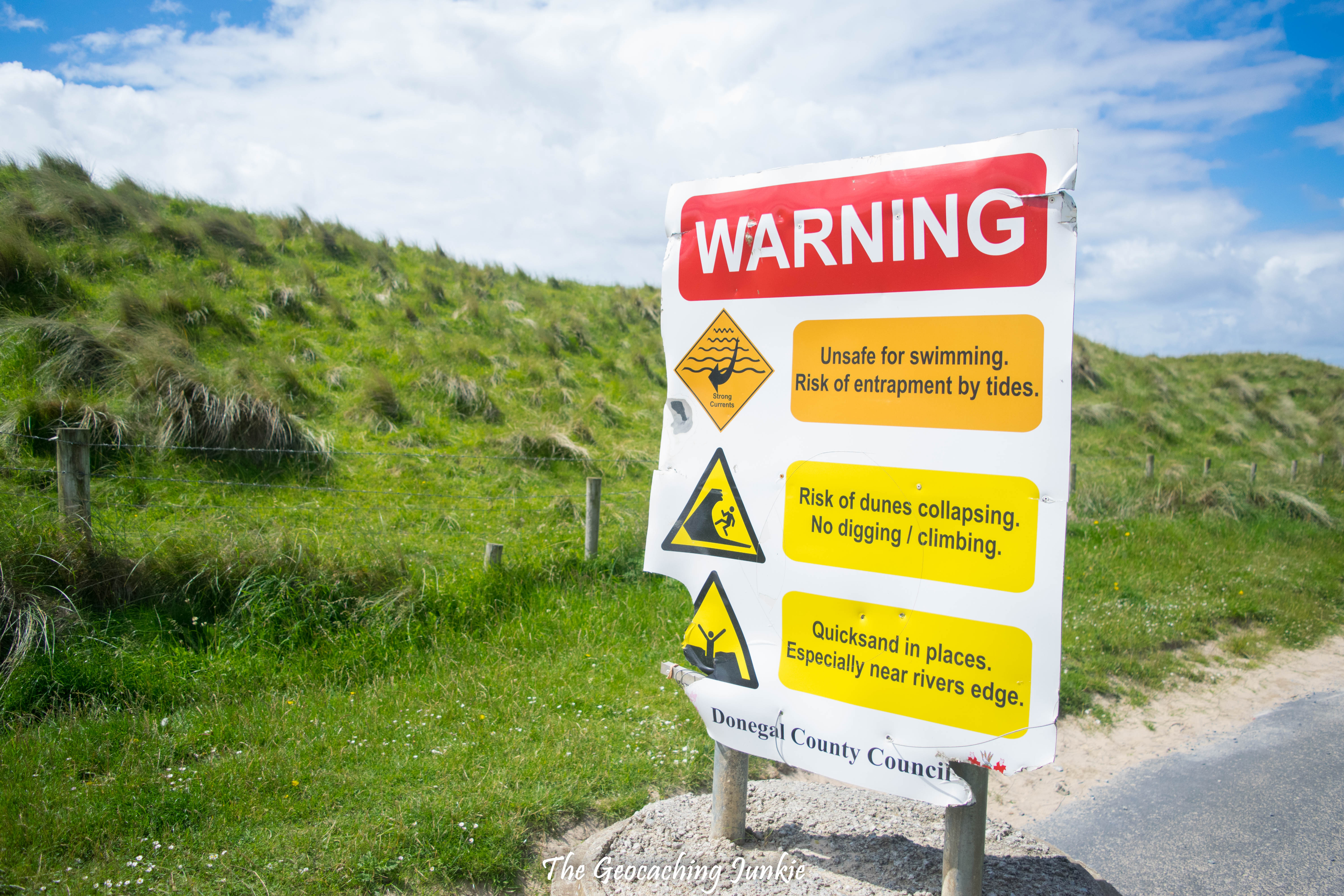 Five Fingers Strand is located close to Malin and is known locally as Lagg Beach. It is hands down one of the most beautiful beaches I have ever visited in Ireland, or anywhere, really.

The sand dunes at Lagg are some of the biggest in Europe and are highlighted by the EarthCache placed there. Amazingly, there were only a handful of visitors on the beach so we enjoyed a leisurely walk along the sand, before relocating to Knockamany Bends above the beach (stage two of the EC) to get a more aerial view.

Since I love waterfalls, I always tend to seek them out when we go somewhere new. Glenevin Waterfall was not too far off our route so we made it our last stop before heading back to Belfast. 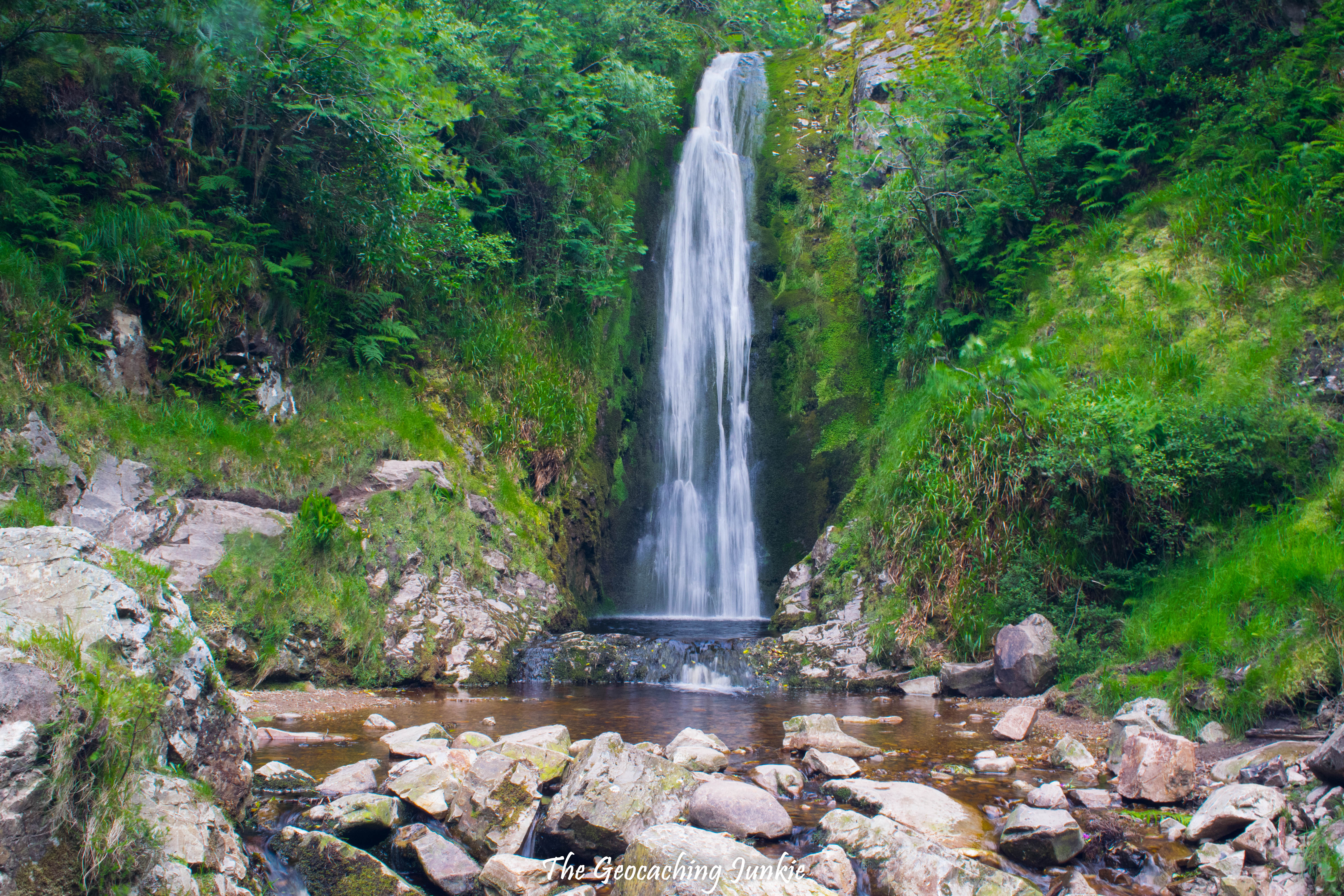 The route to the waterfall is on a well-kept, gravel track, with little bridges that criss-cross a babbling stream – it’s very scenic. The waterfall itself is not the most impressive I have seen, standing at 40 feet, but it’s a beautiful walk through a wood to reach it and there’s something almost meditative about the area around the waterfall, with it’s picturesque rock pool and benches carved from rock to sit and enjoy the atmosphere. 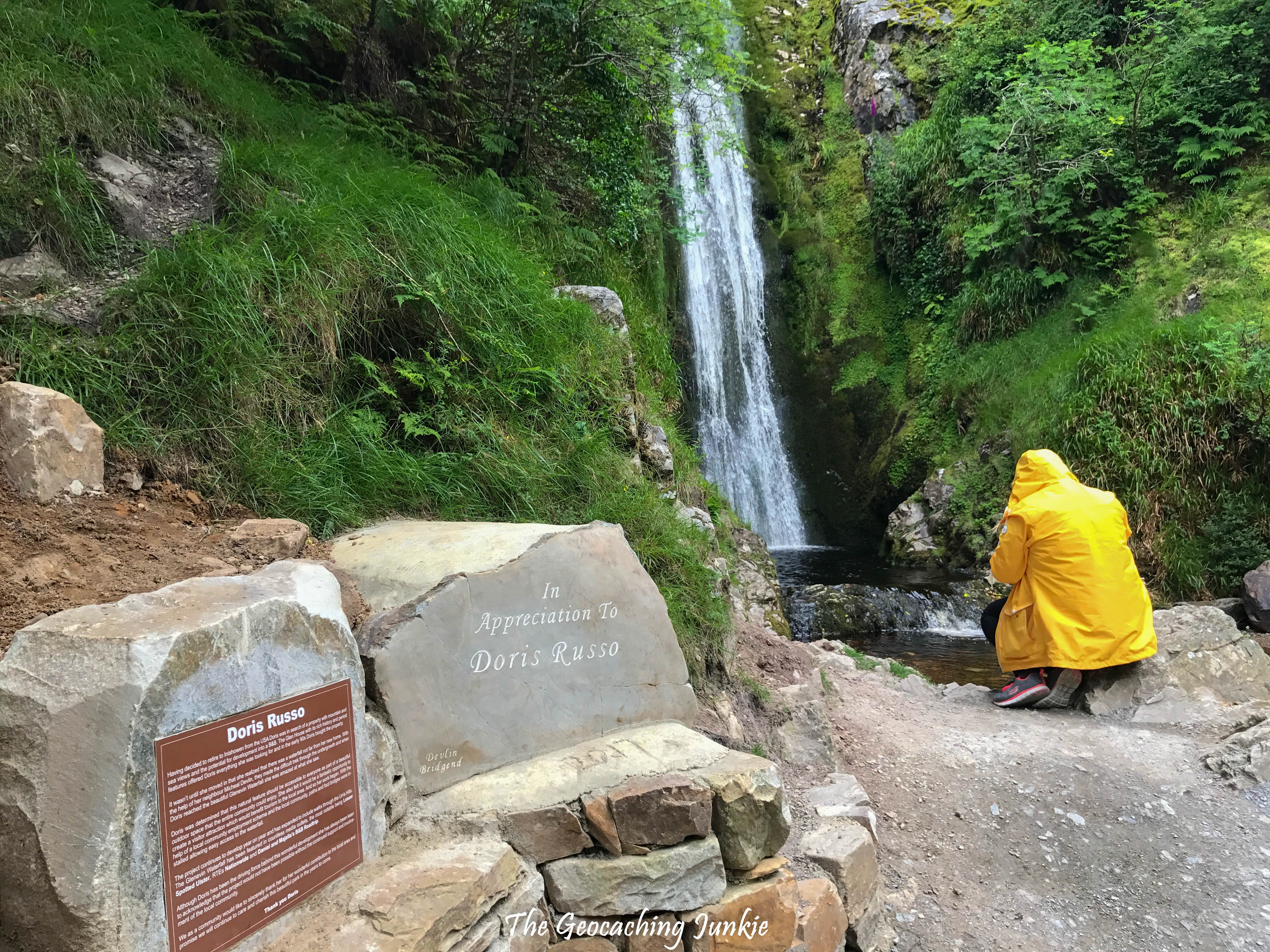 It was American native, Doris Russo, who heard about the existence of a waterfall here in the early 1990s and decided to look for it. Russo had just bought the nearby Glen House B&B and set out to look for the natural wonder with her neighbour Michael Devlin. When they found it, she set about making it accessible to locals and tourists alike and the picnic area and walk are now a much-loved attraction.

It’s safe to say I highly recommend a visit to the Inishowen Peninsula – we still haven’t seen all it has to offer, so we will definitely return! It’s always nice to visit somewhere new, but I find a second visit really allows me to appreciate a place, so I have many spots that are overdue another look.

What amazing places have you geocached at that you want to return to? Let me know in the comments!

3 thoughts on “Geocaching on the Inishowen Peninsula, Donegal | The Geocaching Junkie”