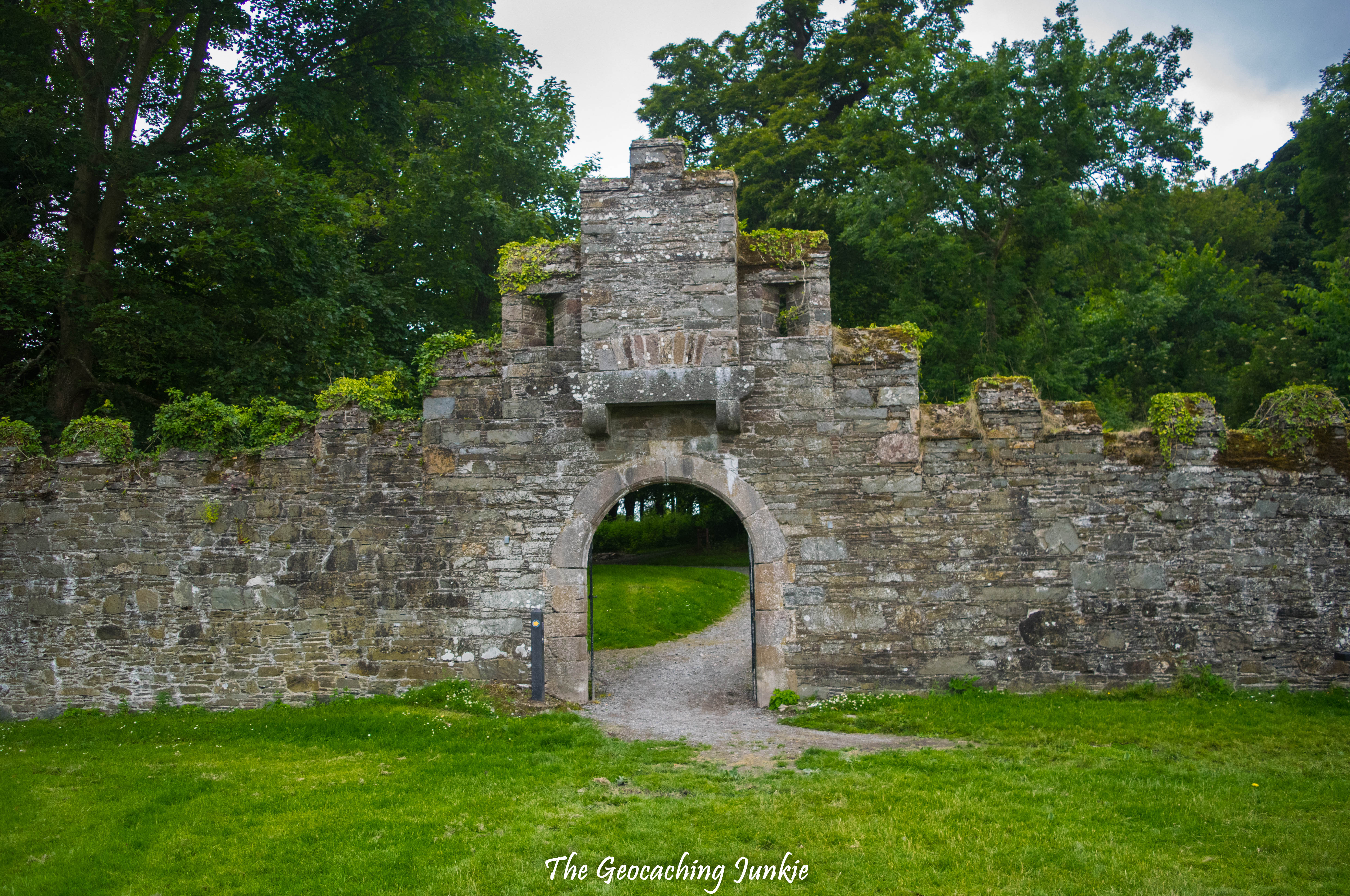 If you read about my day at Chatsworth House in Derbyshire, you’re no doubt aware of my recent obsession with Downton Abbey (yes, I was very late to the period drama party!). Our tour of the house and grounds of Chatsworth was a very grand and romanticised experience and whet my appetite for more of the same excursions in the future (much to the muggle’s chagrin!). When I was tasked with doing some Game of Thrones research for a post I wrote on the Geocaching Blog, a visit to Castle Ward House in County Down was top of the agenda, since it was a major filming location for the popular HBO TV series in the first two seasons.

The estate is managed by the National Trust and entry to the grounds and house costs £8.18 (or £9 including Gift Aid) per adult. This includes a guided tour of the house, which has limited places and must be booked with the ticket office in the stable yard.

Before actually driving to the front entrance of Castle Ward, we drove down a narrow road to Audley’s Field and Castle, on the edge of the estate and part of the National Trust managed property.

When the Ward family bought the estate in 1646, Audley’s Castle was part of the deal. The castle and surrounding field are named after its 16th century owners, the Audleys. These days, it’s more widely known as a filming location for Game of Thrones, and of course, there’s a geocache there 🙂 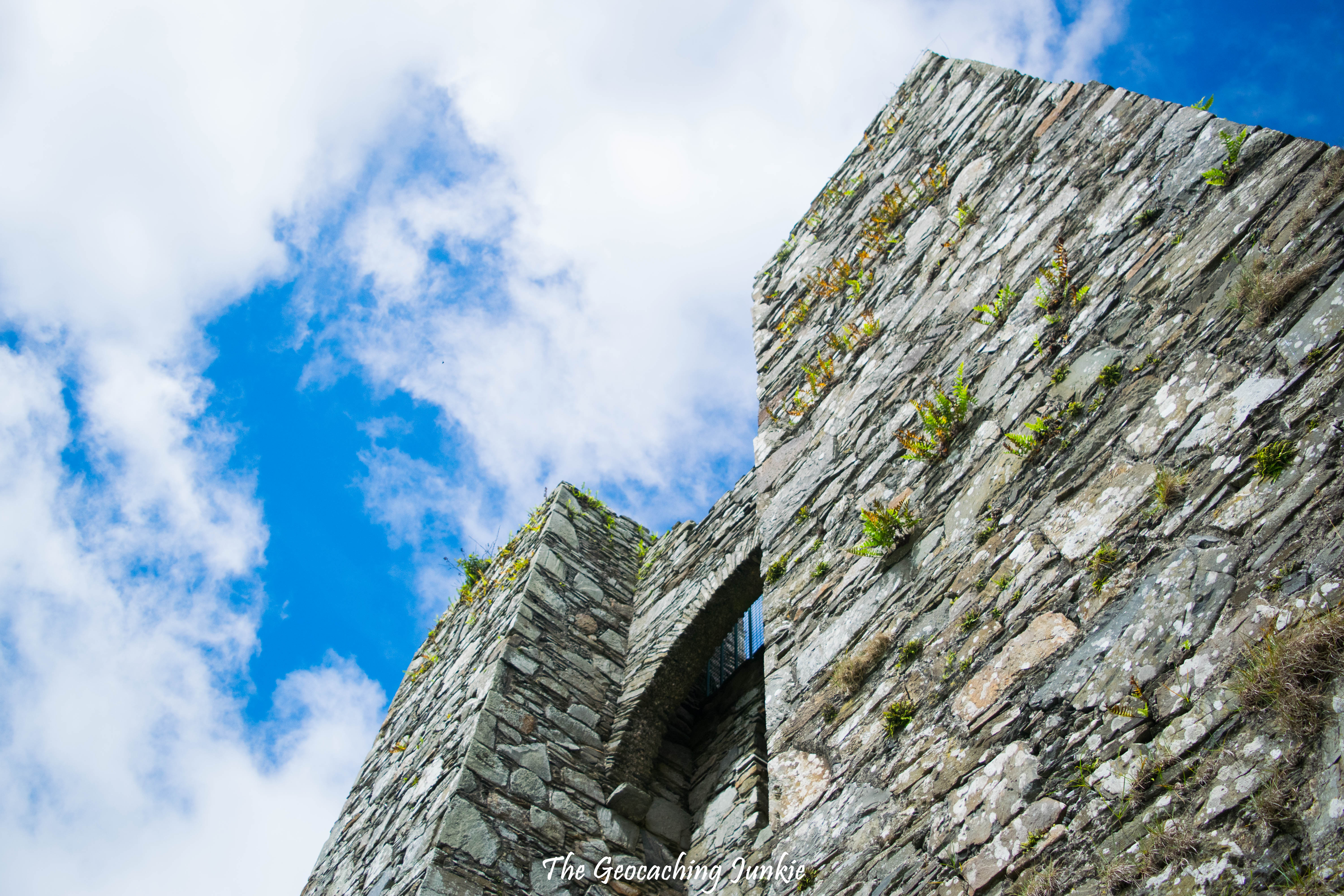 Fun at the Farm

After parking up in the main car park, we first headed for the office in the stable yard to book our guided house tour. After that business was taken care of, we walked to the farmyard, also known as Winterfell! 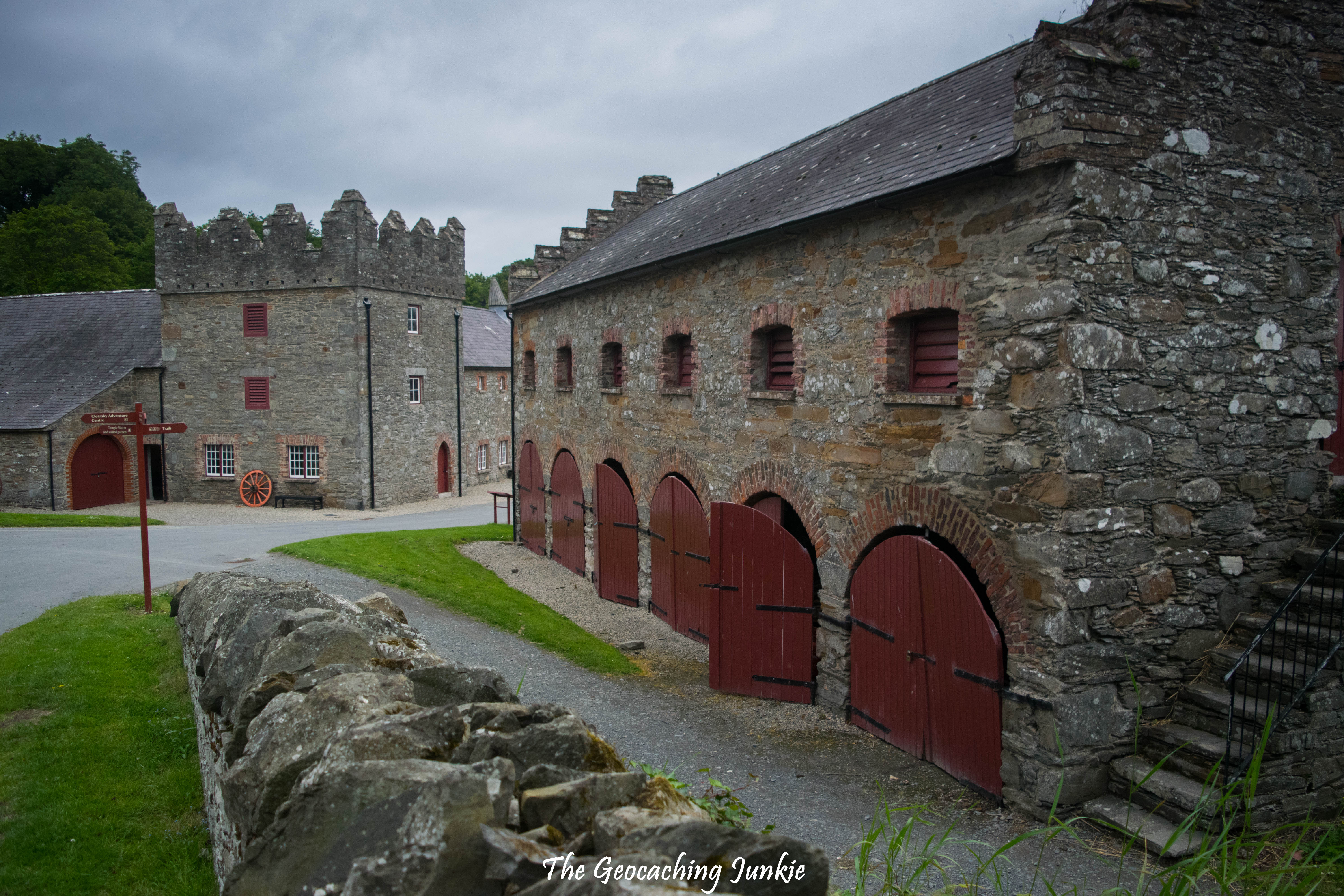 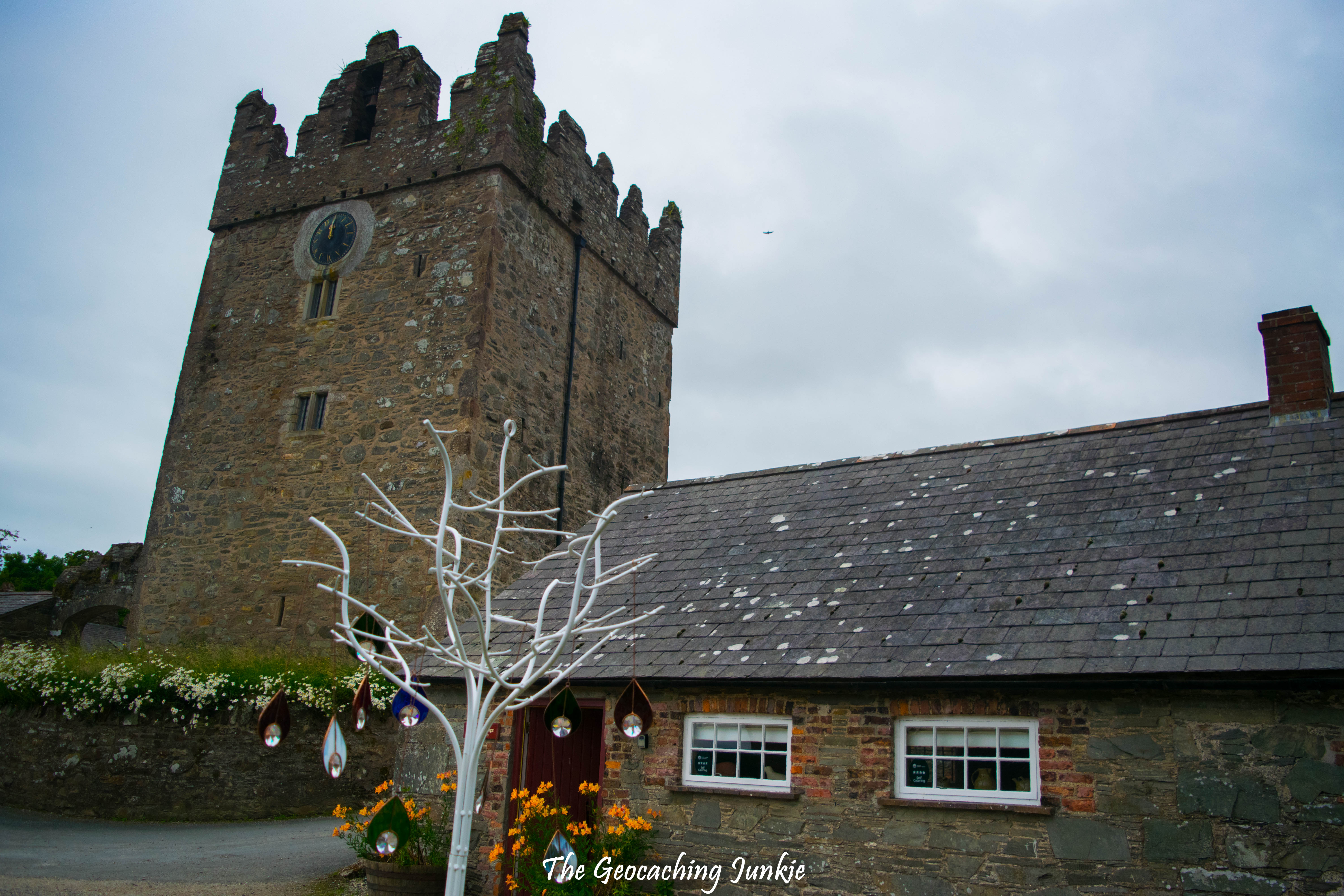 The focal point of the farmyard is the 50 foot tower house, which was open to the public when we visited. Our guide later told us it was the first house that the Ward Family lived in on the estate. It’s certainly a far cry from the grandeur of the main house! 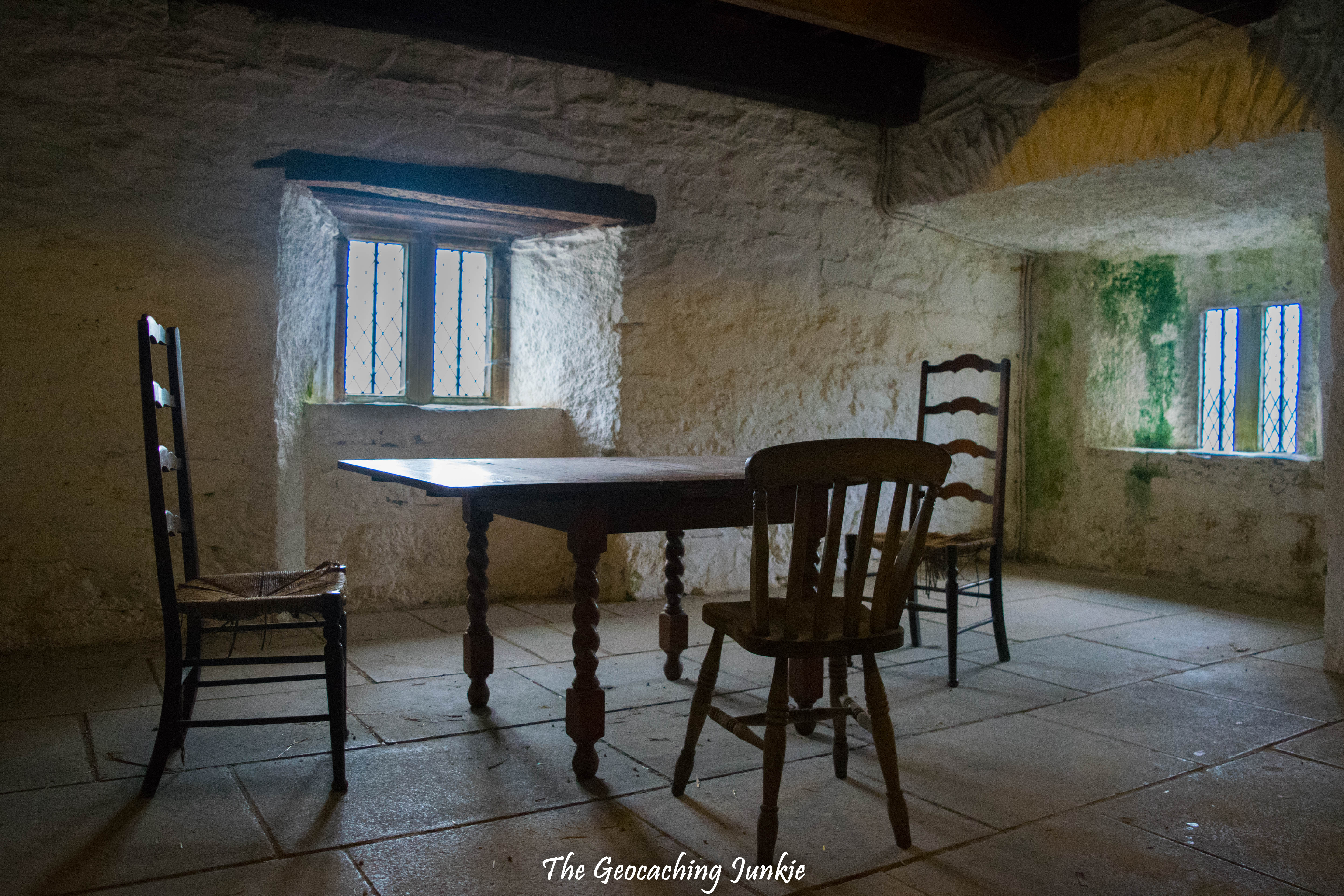 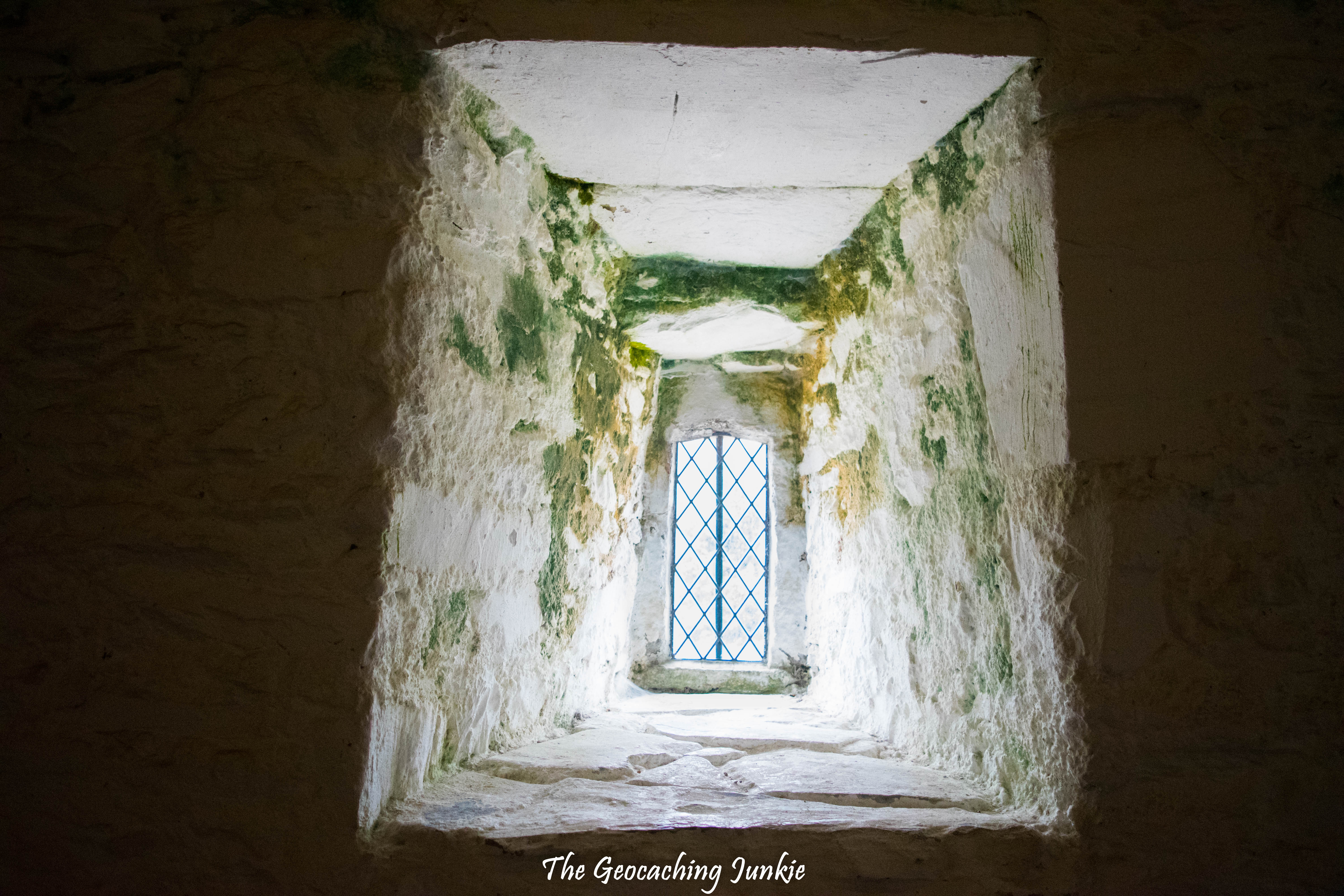 For Game of Thrones fans, there is an archery experience in the farmyard, where enthusiasts can stand exactly where Jon Snow, Rob Stark and Bran stood, shooting medieval arrows. We didn’t partake in that particular activity, but we couldn’t leave the farmyard without paying a visit to some of the farm animals! 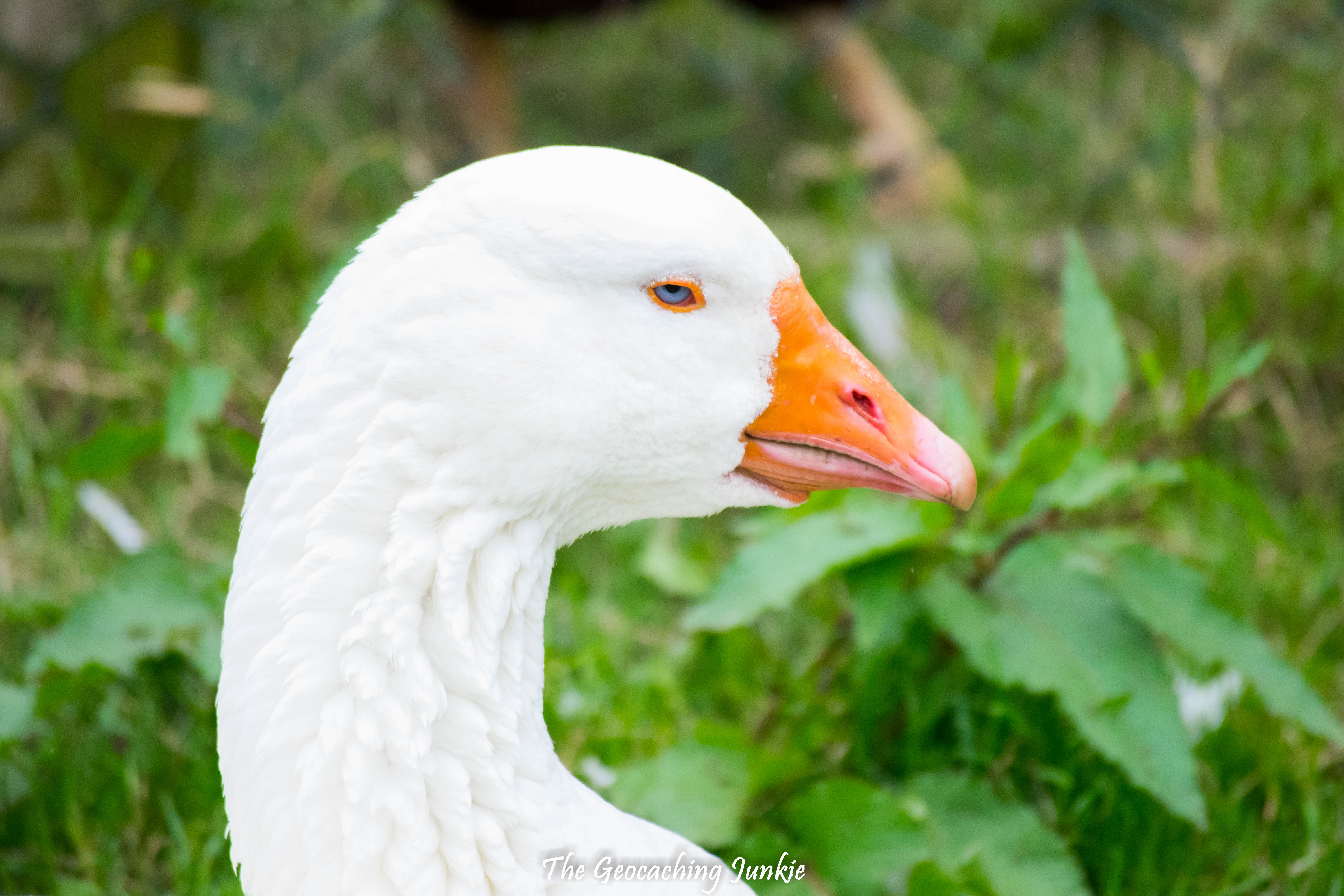 The ducklings were pretty adorable and the goose was throwing us some serious shade because, you know, it’s a goose. The cutest farm residents by far though, were the kids, who were very eager to have a chat with us, despite their mother’s protests!

A House of Two Halves

While I enjoyed our ramble around Audley’s Field and the farmyard, as well as picking off some of the many geocaches as we made our way around the estate, by far the highlight of the day was the house tour. 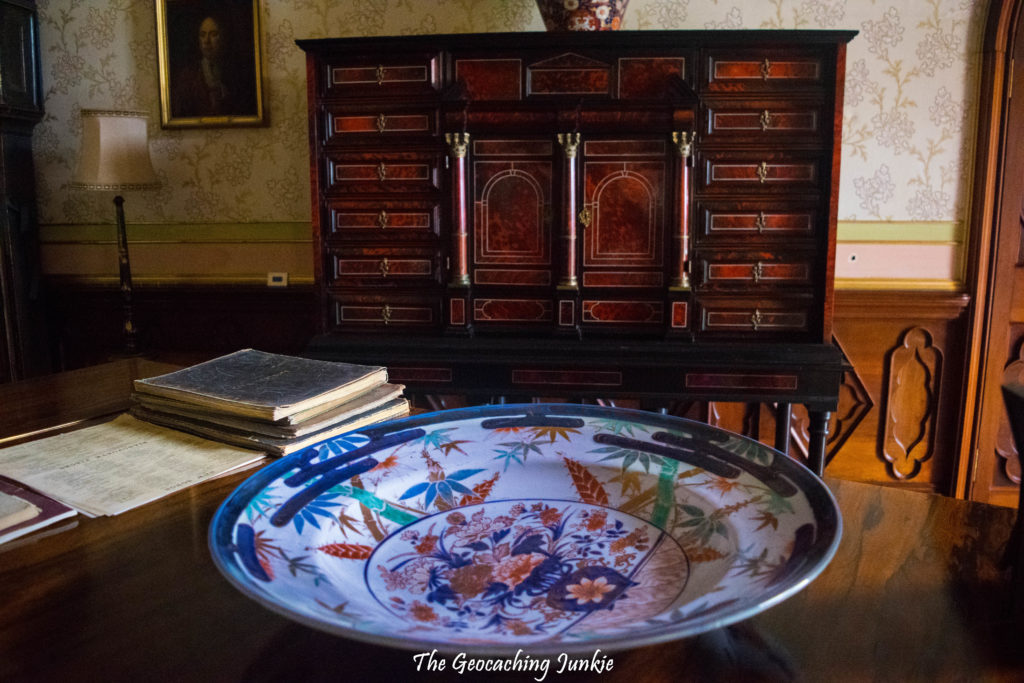 I found the tour much more insightful than our Chatsworth House visit. First of all, it was more personal as we had a fantastic guide, instead of an audio guide. Secondly, the Ward family no longer live in this house, so we got to see things and hear details that I’m sure exist in all these grand houses, but are perhaps not talked about. For example, we were shown a window in the ceiling at one point: every evening, the nanny would bring the children out of their nursery to stand and wait for their mother to pass on her way to dinner. She would give them a cursory wave as she walked by and this was one of only two places she would interact with her children, the other being when they were occasionally brought to her boudoir for ‘visits’. This practice may explain the old adage that children should be seen and not heard! 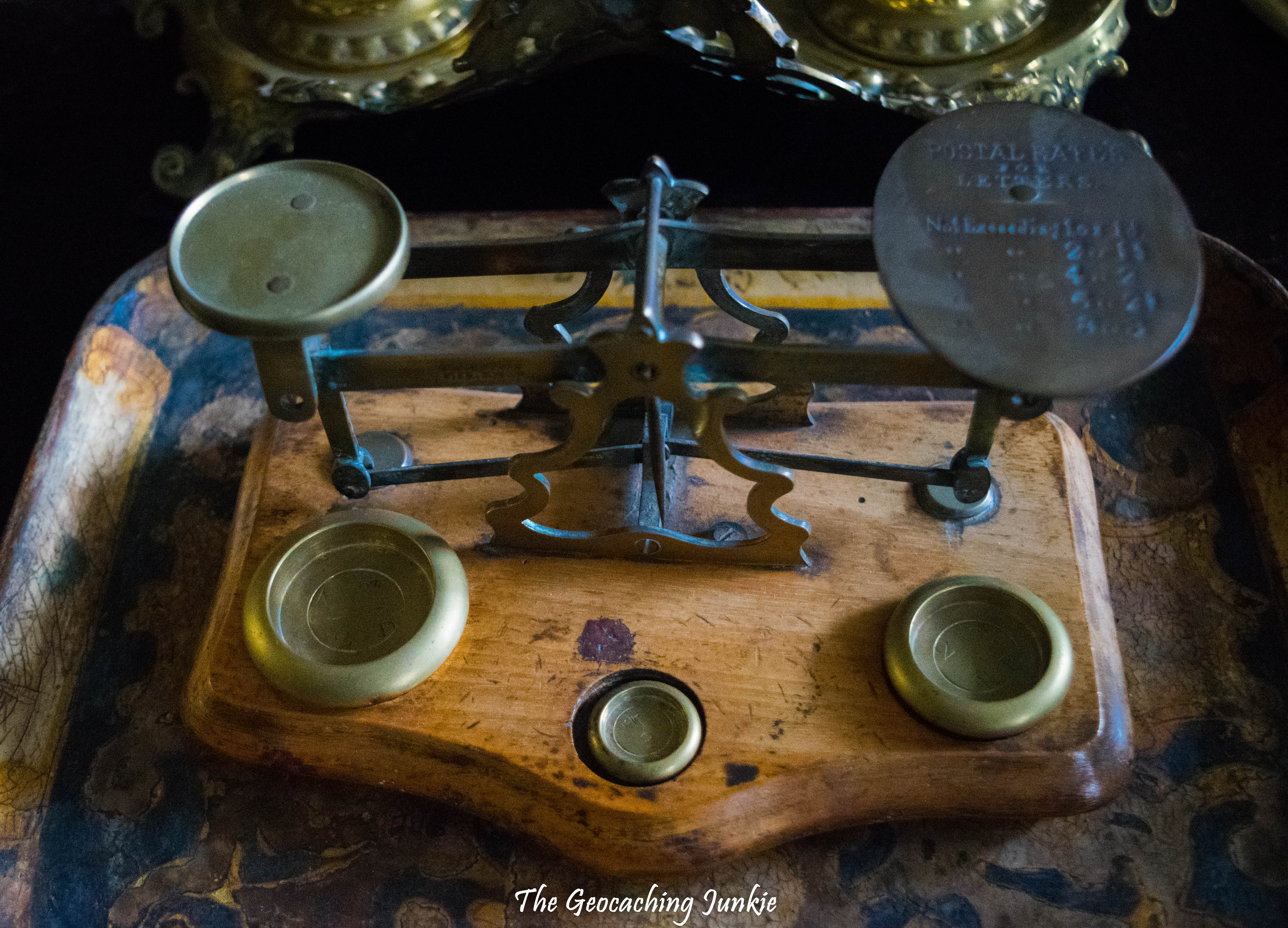 There is a lot to be fascinated by at Castle Ward and our guide was fantastic at detailing the eccentricities of the house and its inhabitants, as well as giving us the highlights of its riveting history. Arguably the most intriguing idiosyncrasy of the house is the fact that it’s architecturally split in two: one half is decorated in the Gothic Revival style and the other in Georgian classical, both inside and out (giving the house two fronts, rather than a front and back). 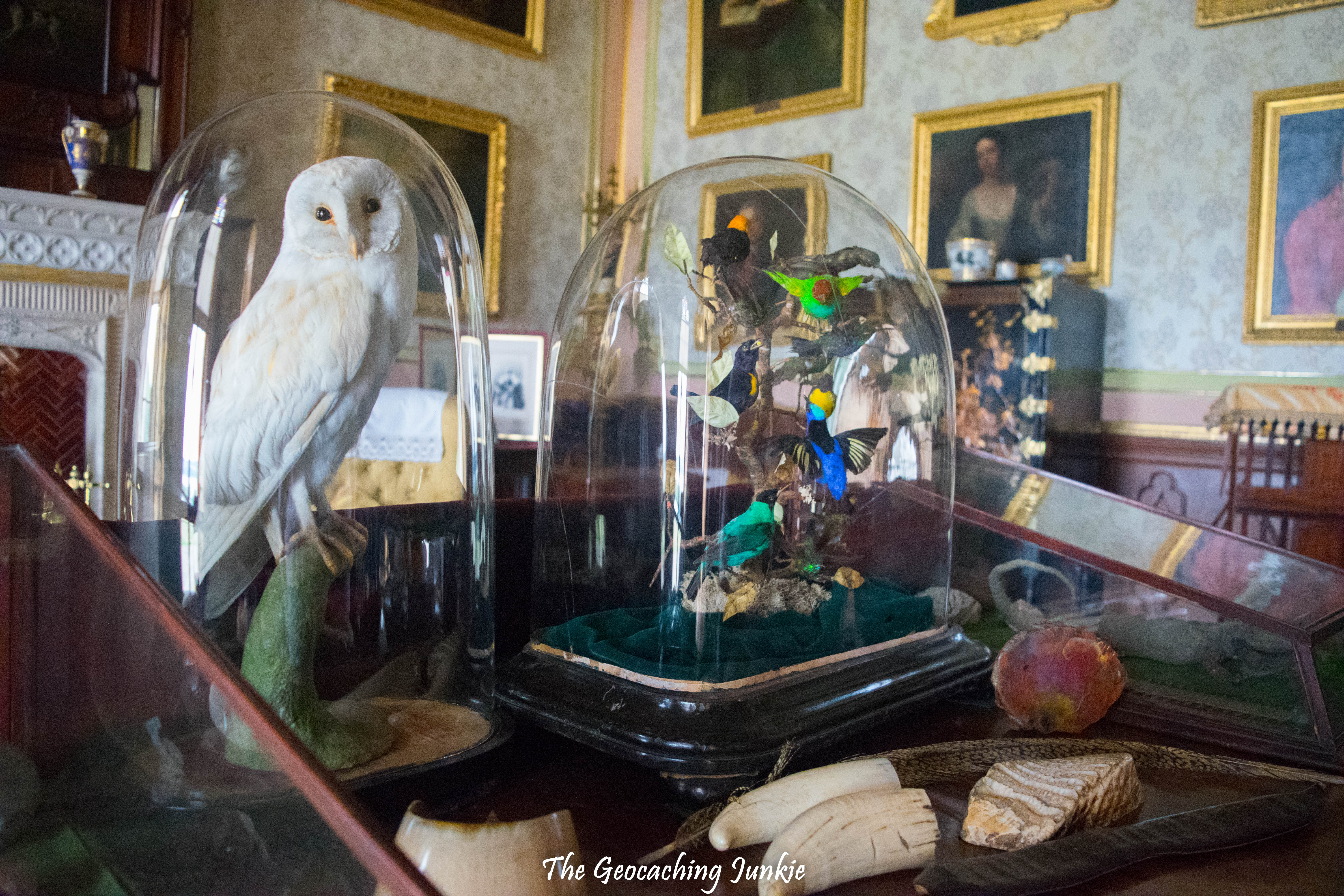 The clashing styles are not the work of a very indecisive/deranged architect, but rather the result of a couple who could not agree on anything, and a husband, who, despite being well within his rights at the time to expect his wife to do as she was told, relented and ‘compromised’: he must have been an early adopter of the ‘happy wife = happy life’ policy! 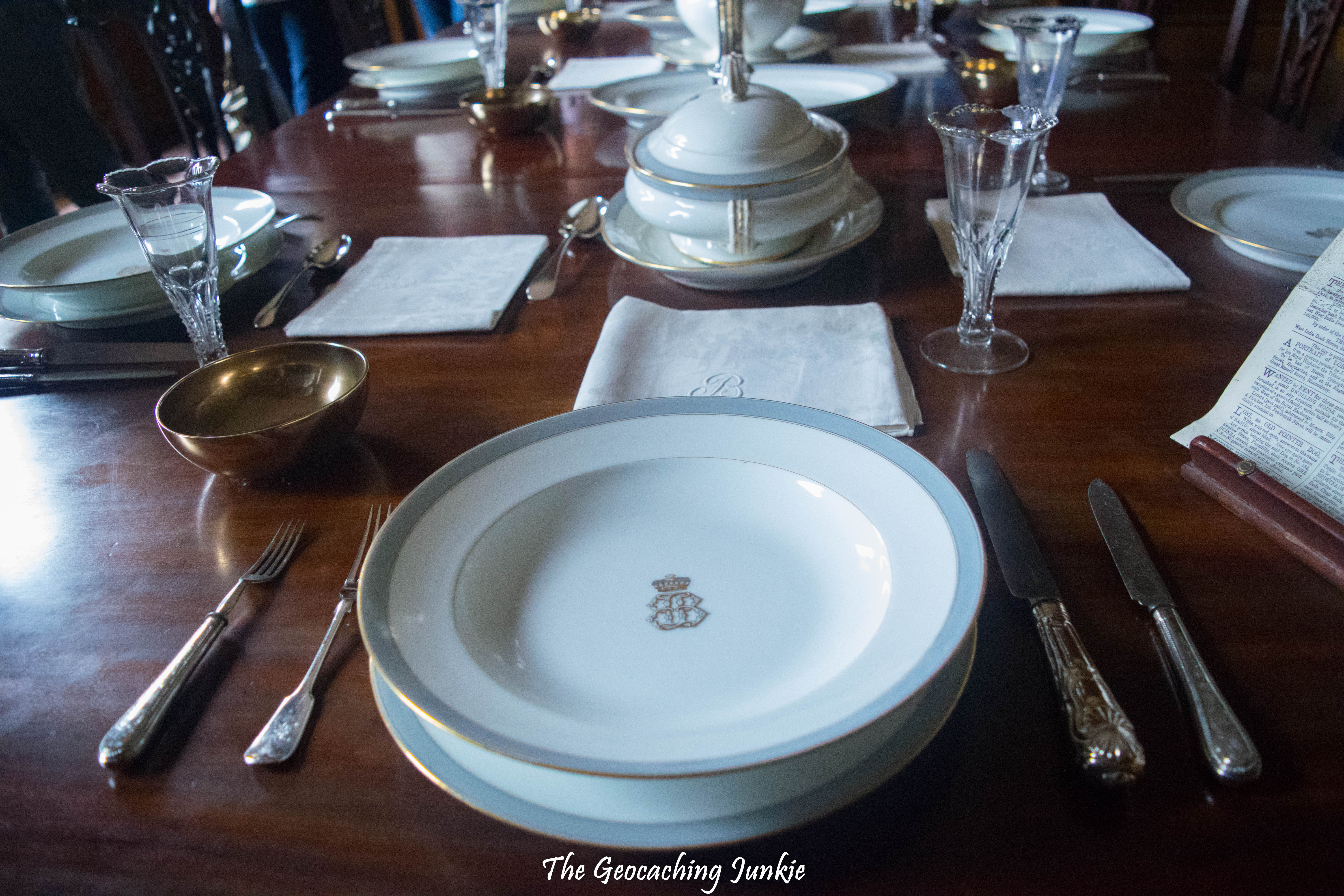 The first stop on our tour was the boudoir, probably my favourite room of the tour, primarily because of the in-your-face lavish ceiling, a somewhat ridiculous homage to the ceiling in the Henry VIII chapel at Westminster Abbey. 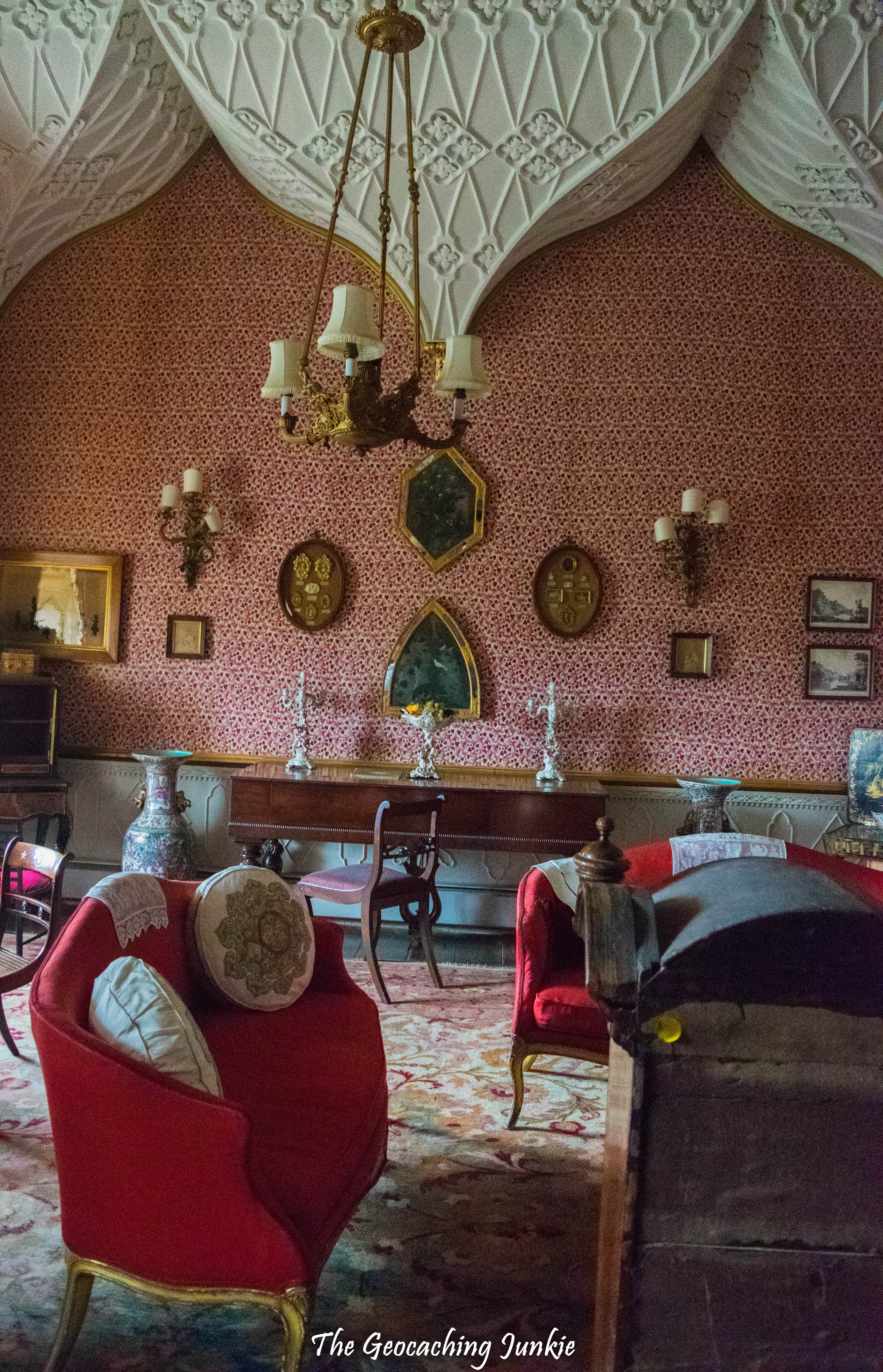 The boudoir is where the lady of the house would entertain guests by serving them tea – an expensive commodity at the time, and thus a way of displaying just how rich the family were. 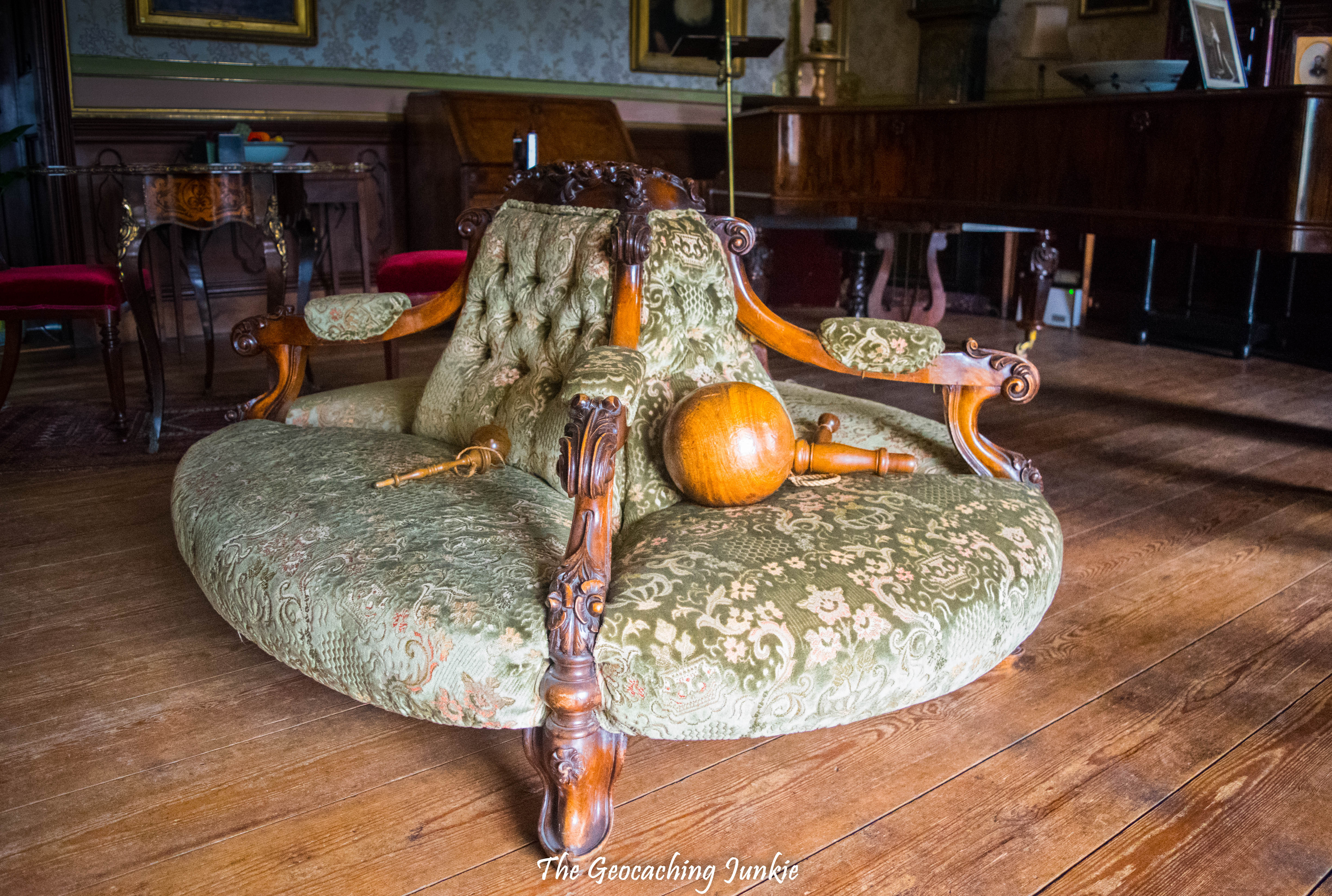 There was a quirky love seat in one of the rooms, with four places to sit. The courting couple would sit back to back and two ‘chaperones’ would sit in between to ensure there was no ‘funny business’! 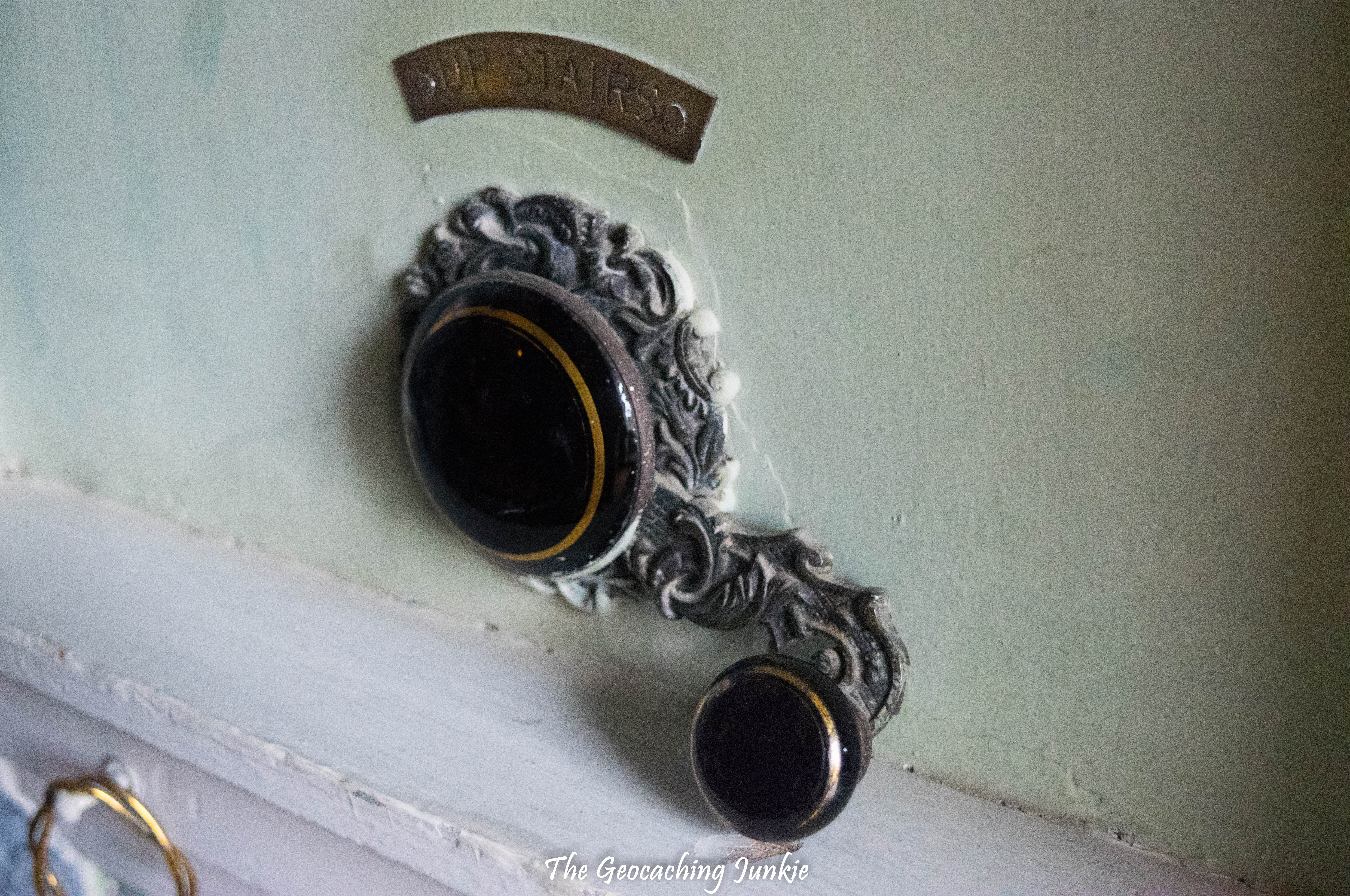 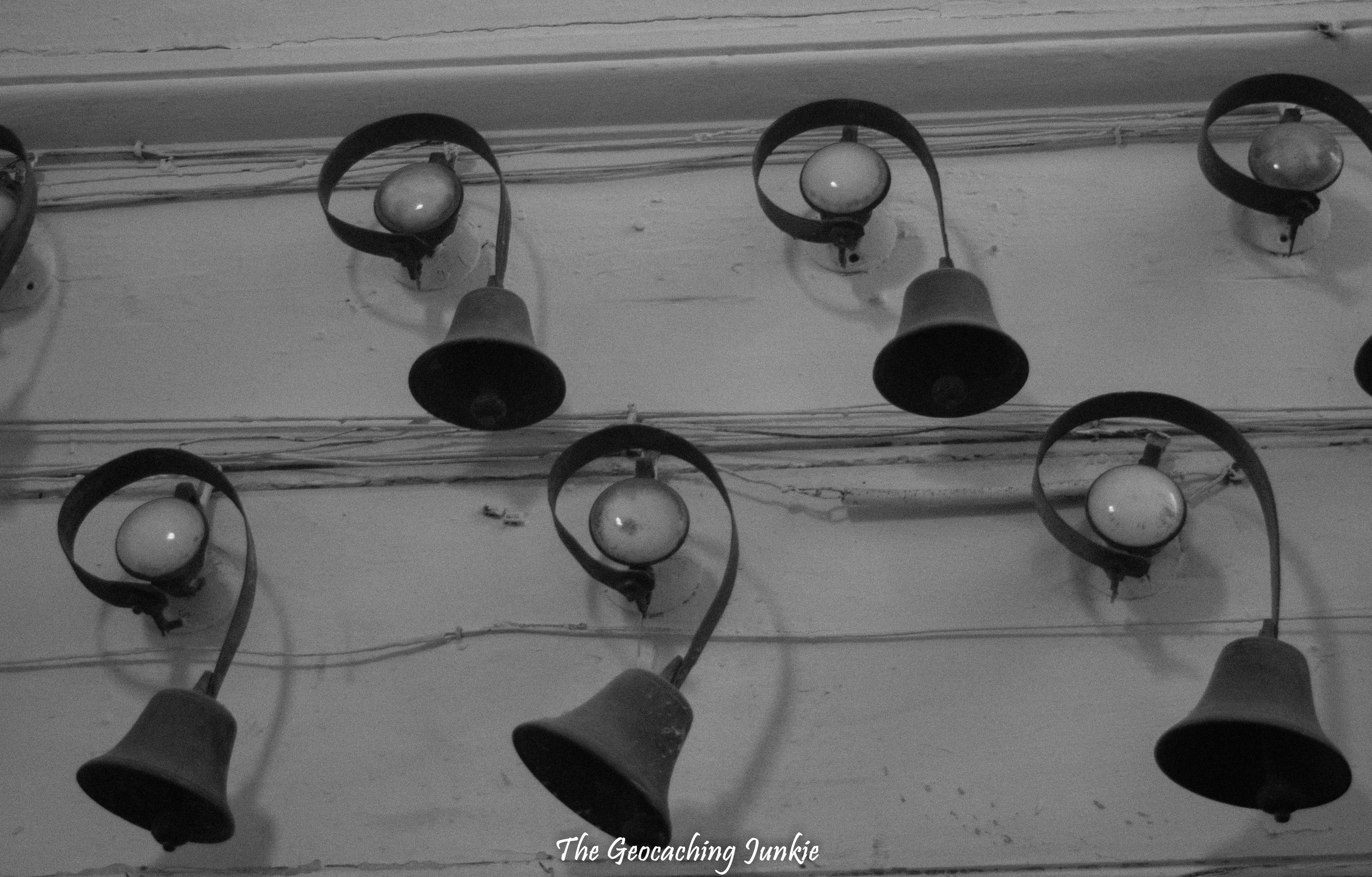 The bell pulls in the upstairs rooms were used to call the staff to a specific room. What we discovered when we went downstairs to the servants’ quarters, was that each bell had a ever-so-slightly different ring and new workers were expected to learn the difference between these in a week. If they didn’t manage it, they were let go. 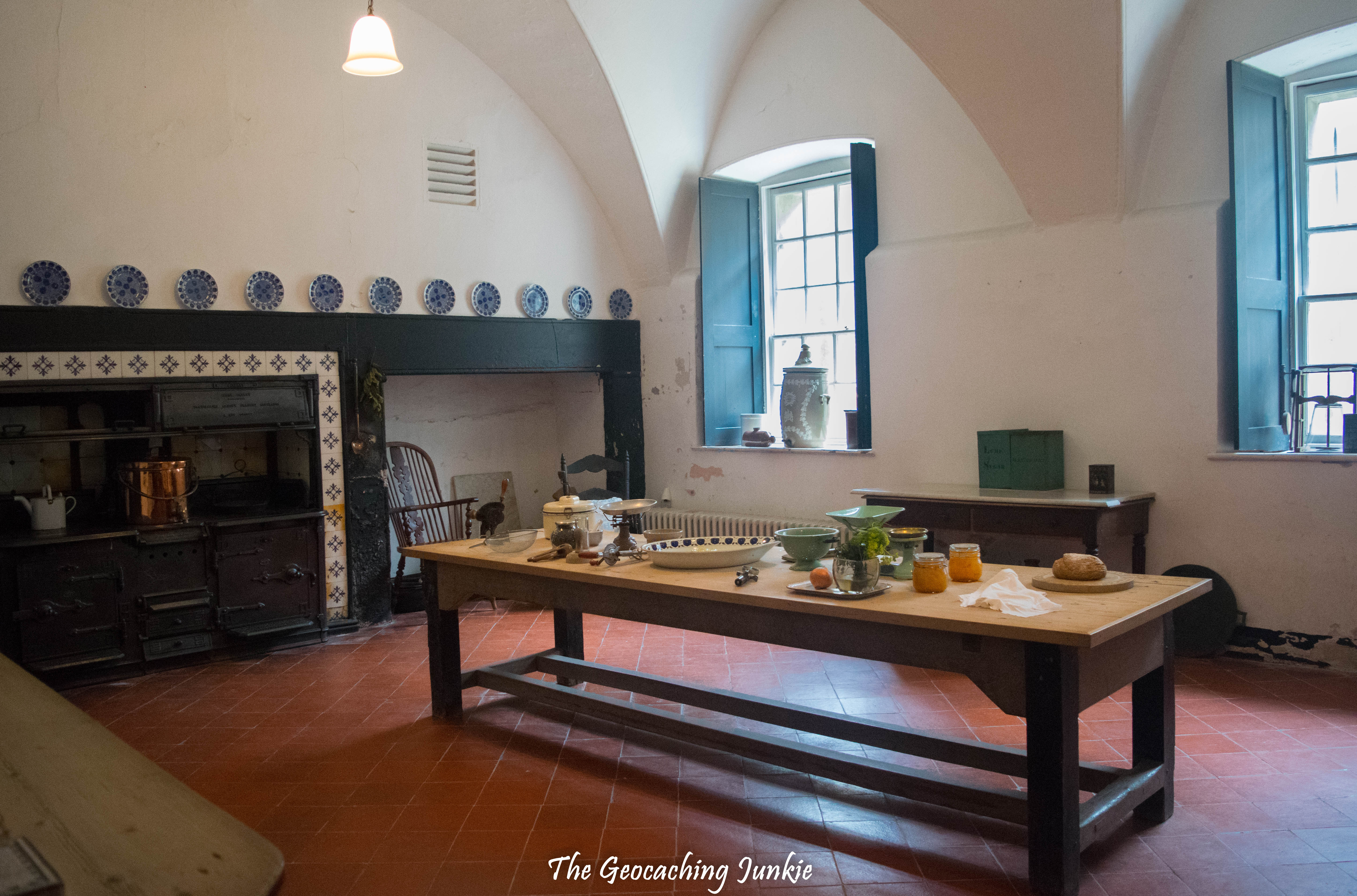 We saw the housekeeper’s living room downstairs, as well as the wine cellar and the kitchen. Our guide shared lots of interesting tidbits about the workings of the house; it was one of the most interesting tours I have been on. The increasingly popular audio guides simply don’t compare to having a knowledgeable guide to interact with. 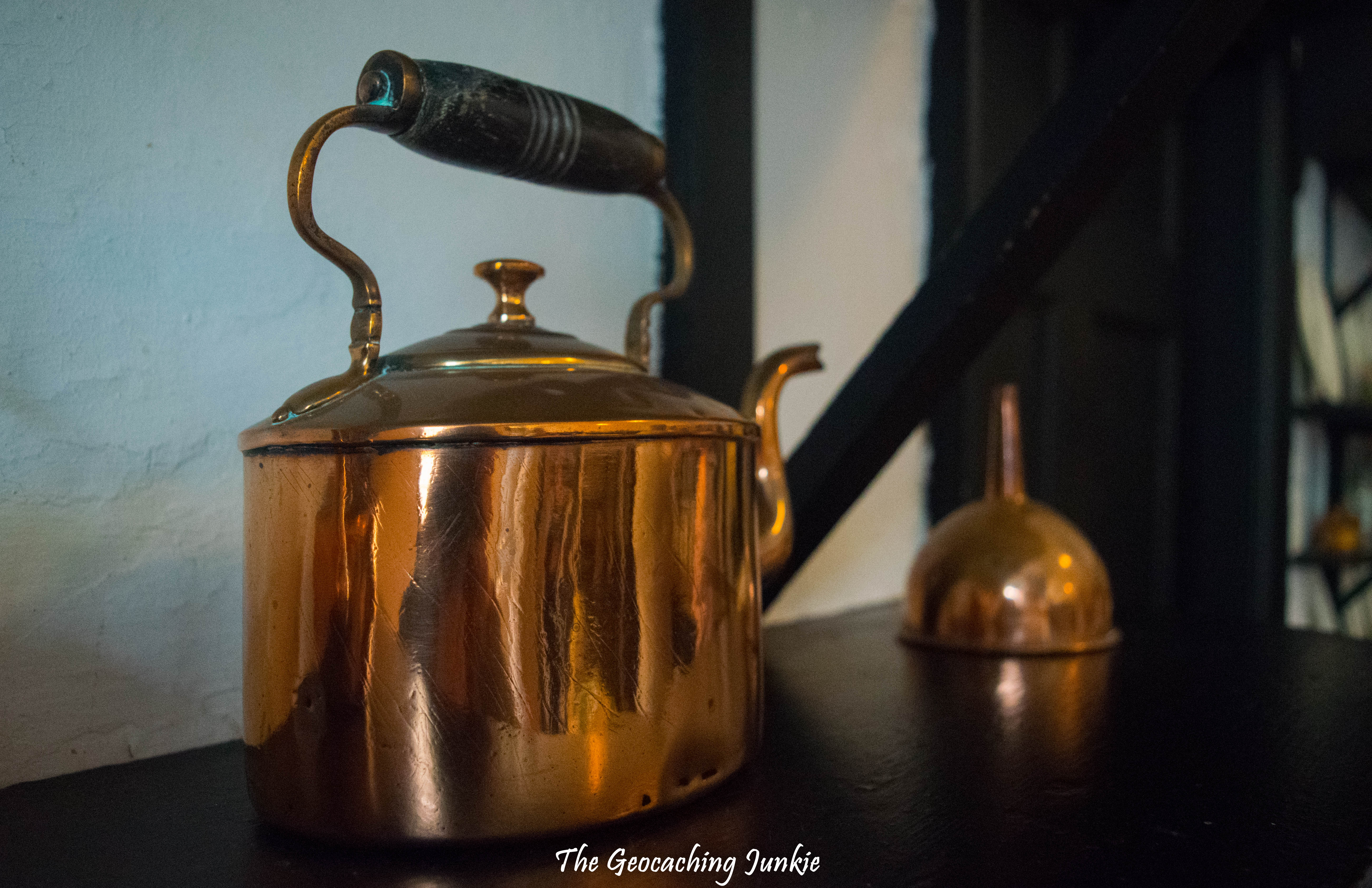 I thoroughly enjoyed our visit to Castle Ward, and like many places we have been, there is much more to explore – pro tip: it’s a good idea to not see everything of a place you really love, so you have an excuse to visit again ;).

Do you agree that an actual tour guide is better than an audio guide? I’d love to hear your thoughts, so let me know in the comments.

2 thoughts on “Exploring Castle Ward: A House of Two Halves | The Geocaching Junkie”