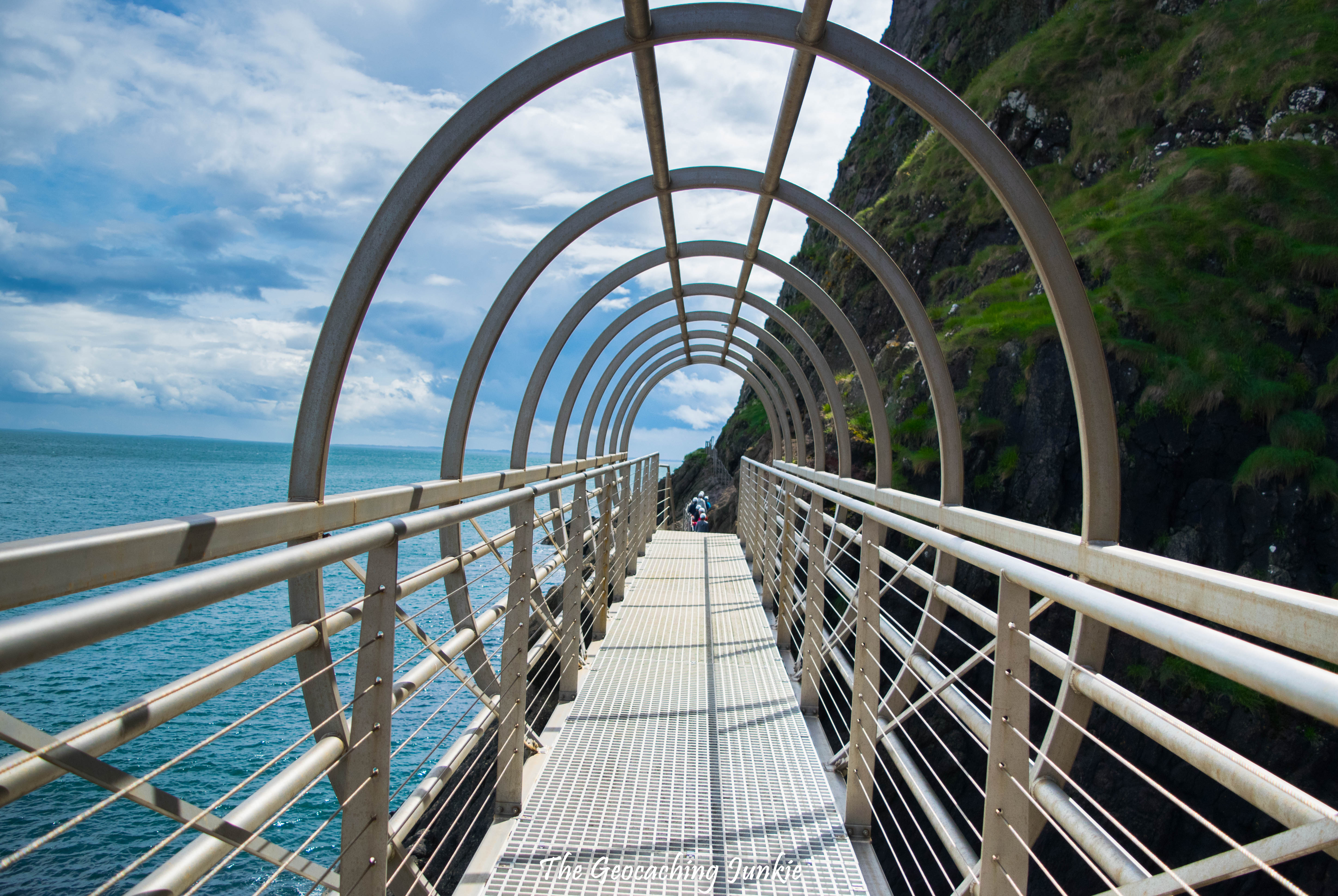 Hailed as the most dramatic walk in Europe, The Gobbins coastal path at Islandmagee, County Antrim has been on my ‘must-do’ list ever since it was reopened in August 2015, after an almost six decade long closure. It was closed again in June 2016 due to increasing rock fall, but was partially opened in June this year, with two-thirds of the walk currently accessible.

The Gobbins was the brainchild of Berkeley Deane Wise, a railway engineer from County Wexford, who at the age of just 22 developed tunnels and bridges for what continues to be one of the most challenging stretches of railway in Ireland, along the coast at Bray Head. In 1888, Wise took a job as Chief Engineer of the Belfast and Northern Counties Railway Company, where he took the company’s keen interest in tourism to the next level. After designing paths and bridges at Glenariff Glen, as well as helping establish the nearby town of Whitehead as a premier tourist destination, Wise turned his attention to the sheer cliffs which, after much elaborate planning, were set to become home to The Gobbins.

The path was inaugurated in August 1902 and quickly became a must-see attraction for both tourists and locals alike, with day trippers taking the train just to experience the cliff path. Two tea-rooms were opened close by and it was reported that, on summer days, the path was busier than Royal Avenue in Belfast (the city’s principal shopping thoroughfare). 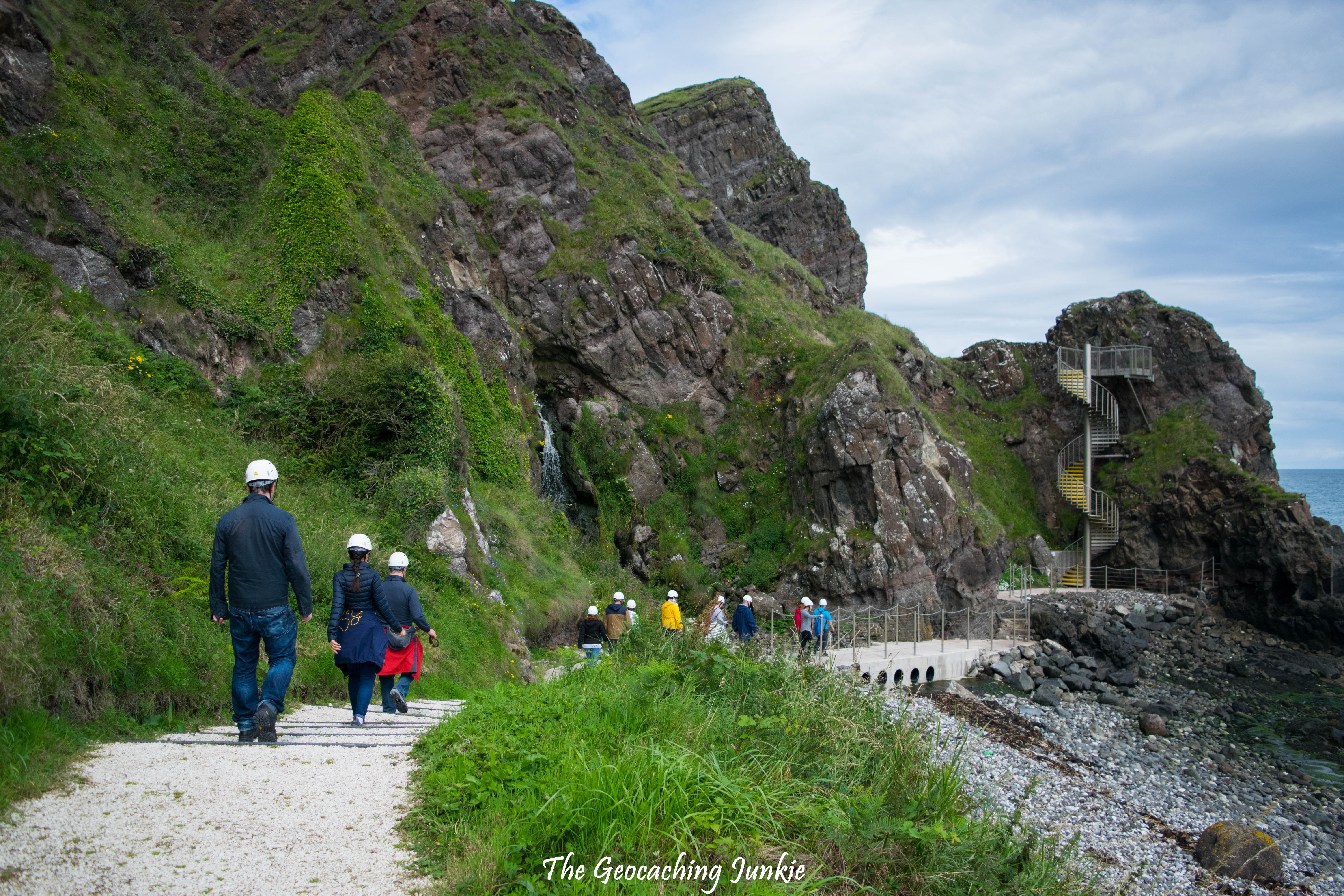 Due to its exposed location and the effects of wave erosion, the path required constant maintenance works and closed in 1936, before opening up again after World War II, and being forced to shut once again in 1954. Several attempts were made to reopen the path but none came to fruition for various reasons until 2011, when work began on 15 new bridges and 6 new gallery structures. 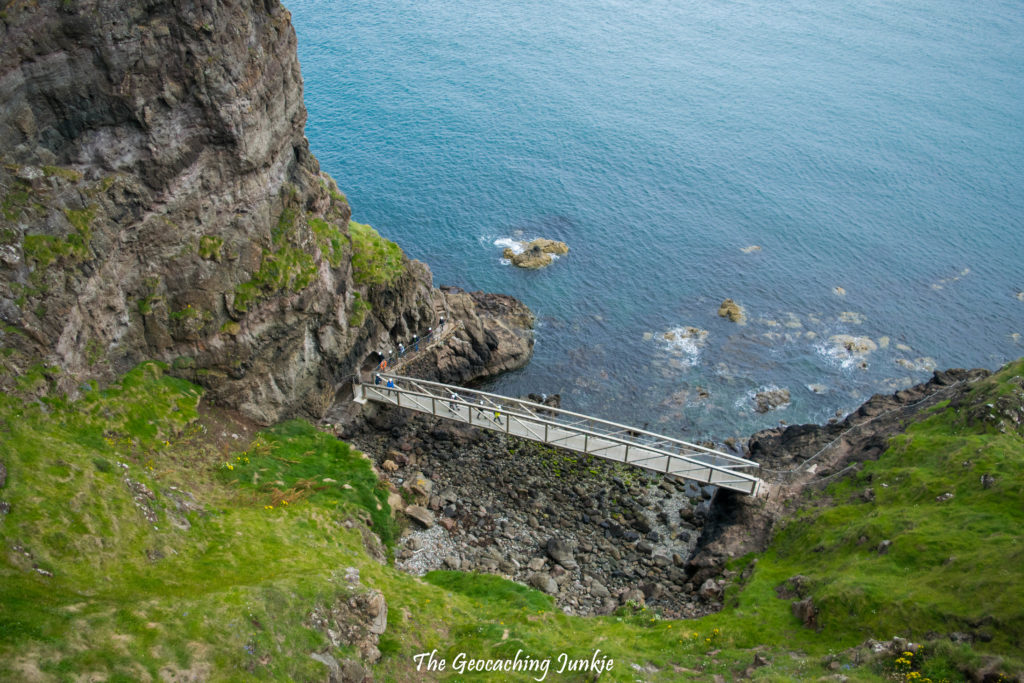 When it first opened, the tubular bridge along the path became a symbol of The Gobbins and although the original fell in to the sea, a new one was installed in the latest renovation and it is without doubt the most impressive structure along the walk. 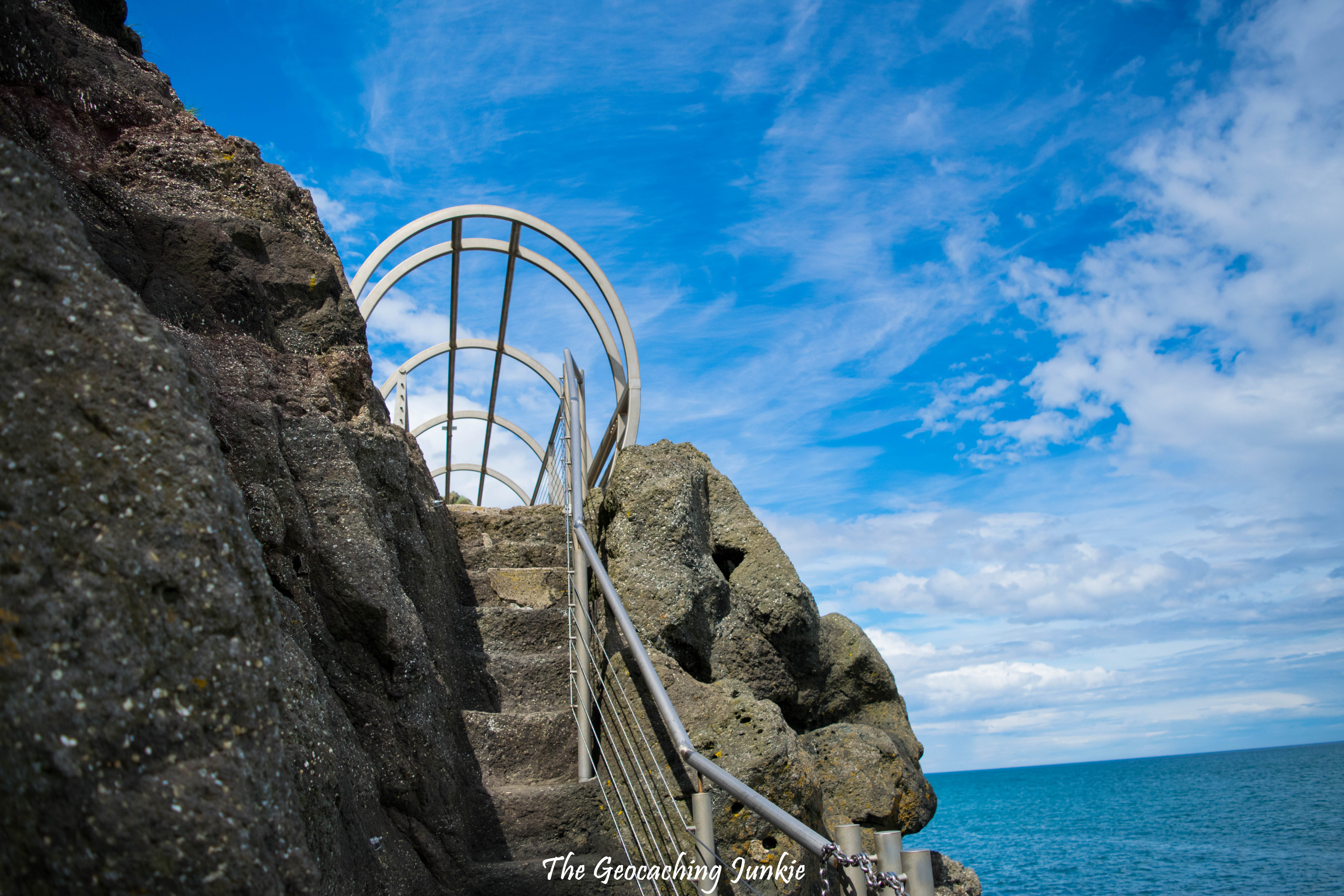 Safety and a Steep Slope

We arrived at The Gobbins Visitor Centre in plenty of time before the start of our tour and were greeted at the door. Bags are not permitted on the walk, and the only items you can bring are a bottle of water (provided) and a camera – as long as it’s hung around your neck, leaving your hands free. I had my rainproof cover over my camera as it had been showery earlier in the day but we were informed it was too bulky and we couldn’t bring it. Not bringing a camera was not an option so I conceded I would hide it under my rain jacket if we met any showers. Our footwear was also inspected and deemed inappropriate, which was fine as we had proper hiking boots in the car we were planning to change in to.

There are lockers provided to keep your belongings secure, and the key is worn safely around your wrist. We were told a horror story about keys to a rental car being accidentally dropped in to the sea on the walk, so made sure all pockets were emptied! We were given the safety talk from our friendly guide, Jill, and picked up our helmets before boarding the mini bus to take us to the start of the walk. 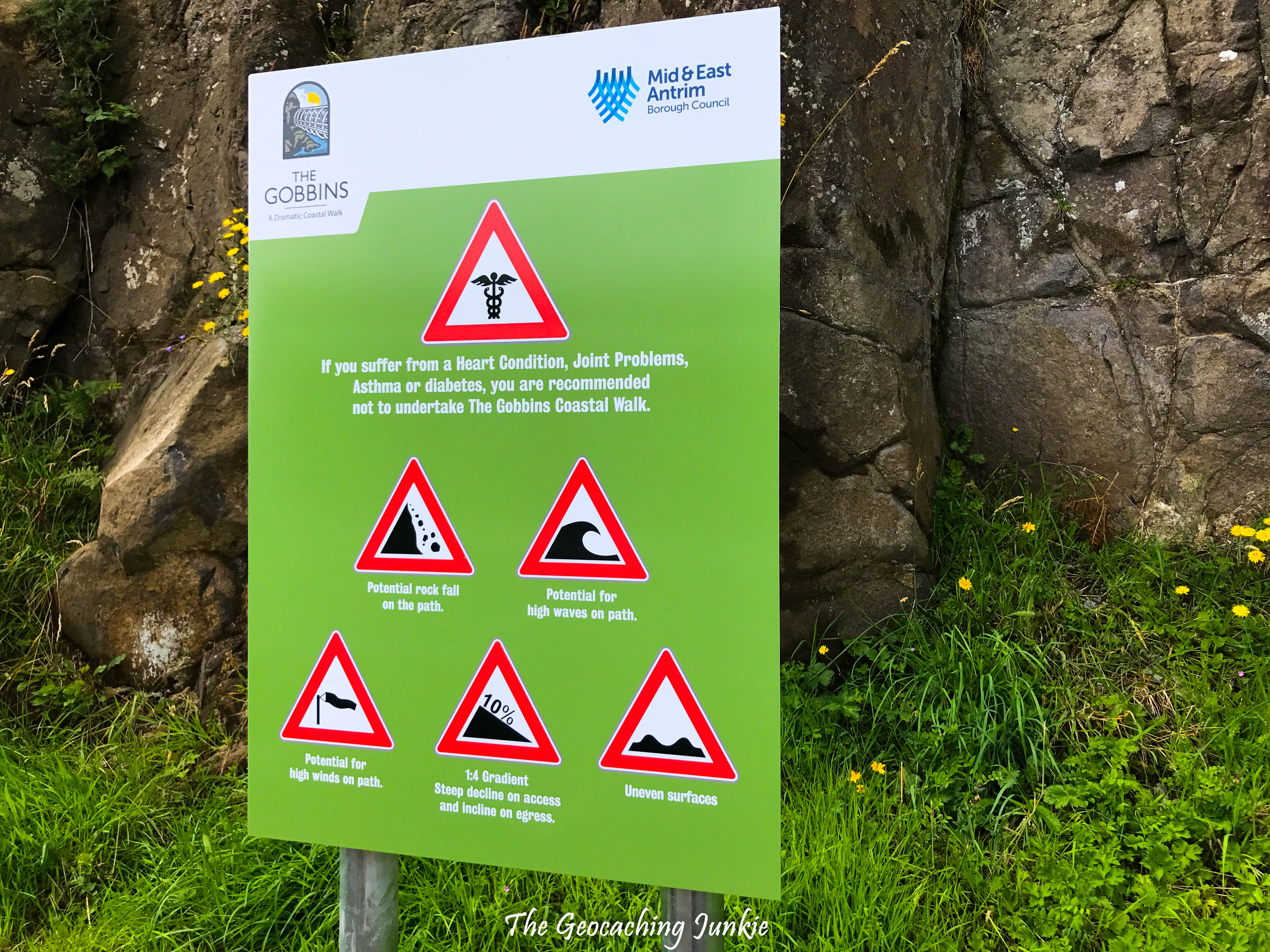 The path down to the start of the walk is steep – a 1:4 gradient incline in some places so you need to watch your footing, and not think too much about coming back up to the bus stop… Our first stop was a viewing platform that looks down on to one of the bridges we’d be crossing over. It gives a great perspective of what you’re about to undertake. 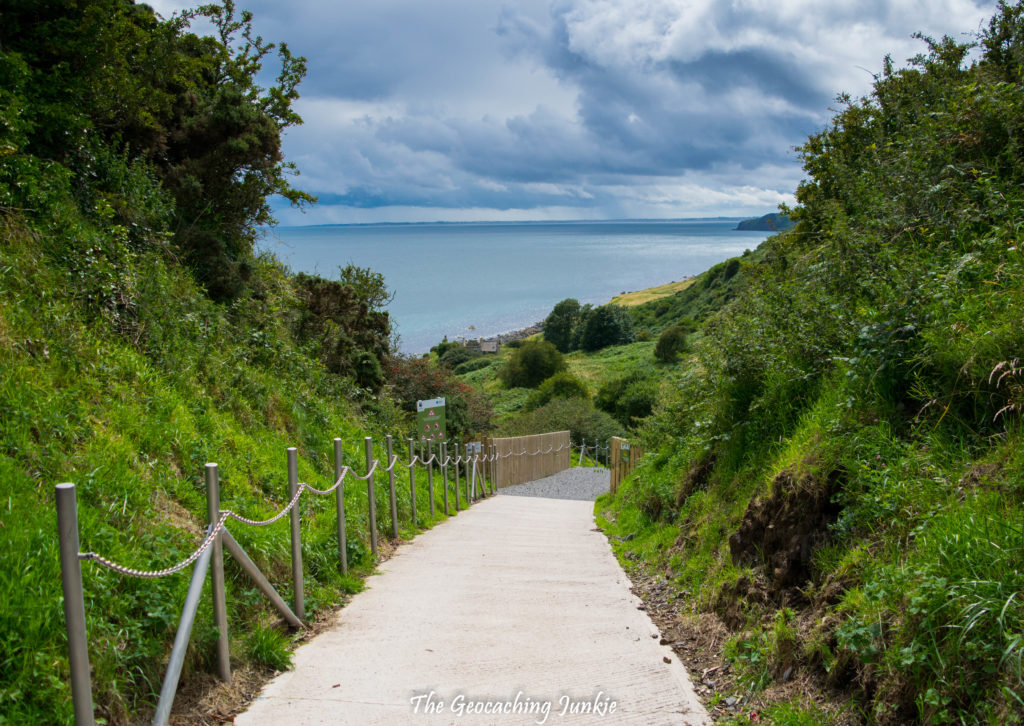 The entrance to The Gobbins, an oval-shaped hole bored in to the rock, has been there since the path was first established in 1902, and is affectionately named ‘Wise’s Eye’ after Berkeley Deane Wise. When the path was first opened, a toll collector would stand at the entrance every day from 10am until 5pm. 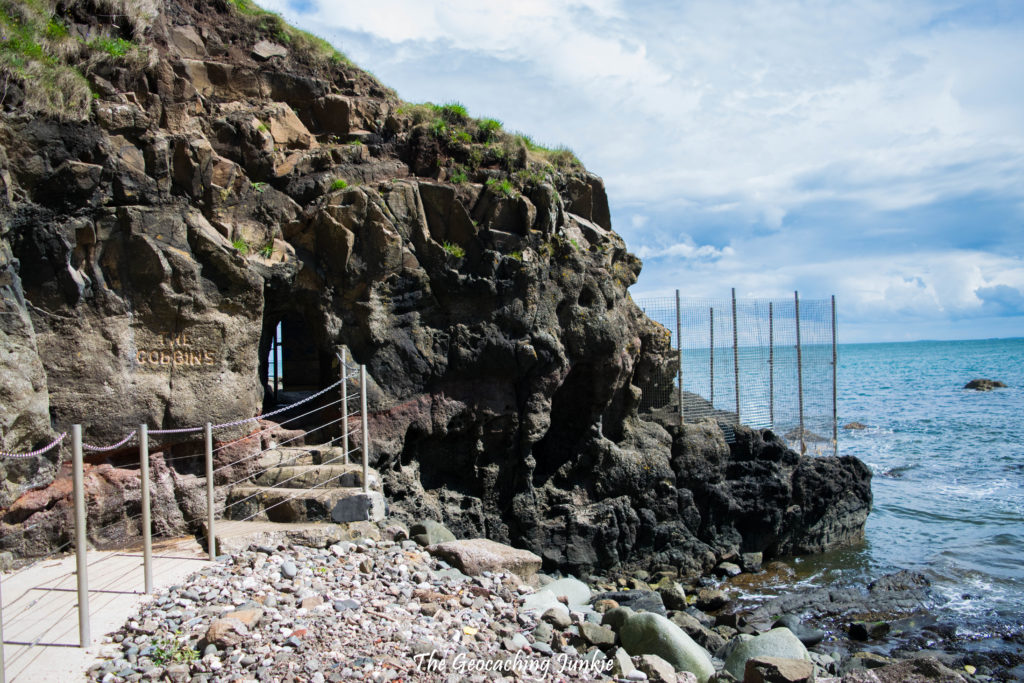 From this point, it’s easy to see why helmets are an absolute must: even I, being only 5 foot 4 inches, had to duck down walking through the egg-shaped entry point. The path is quite uneven, so sturdy boots or walking shoes are definitely recommended, and there’s the added danger of slippy surfaces if it rains before or during your visit. If you go when the tide is in, there is also the possibility of being soaked by waves – we got lucky as our tour was at low tide! 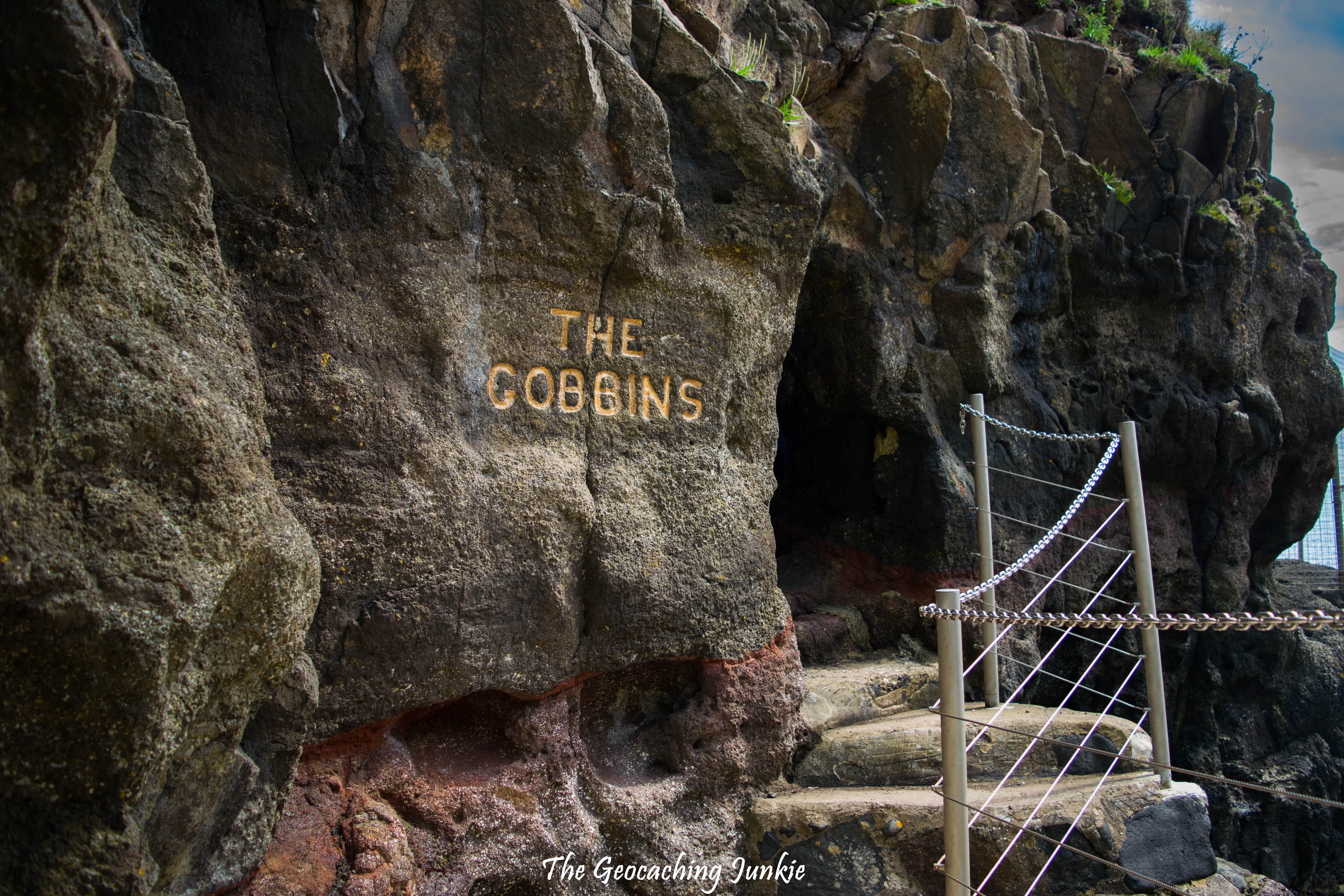 Cross That Bridge When We Come To It

As impressive as the carved out trail snaking its way around the cliffs is, the bridges really had me awestruck. The most magnificent is, of course, the tubular bridge, a replica of the original that was put in place when the path first opened.

Unfortunately, our tour was cut short at the tubular bridge, as a third of the path, including the 22 metre long tunnel – part of which runs under the sea – is closed due to increased rock falling. Work will soon begin on making this part safe once again and it’s hoped the path will reopen in its entirety for the 2018 season. 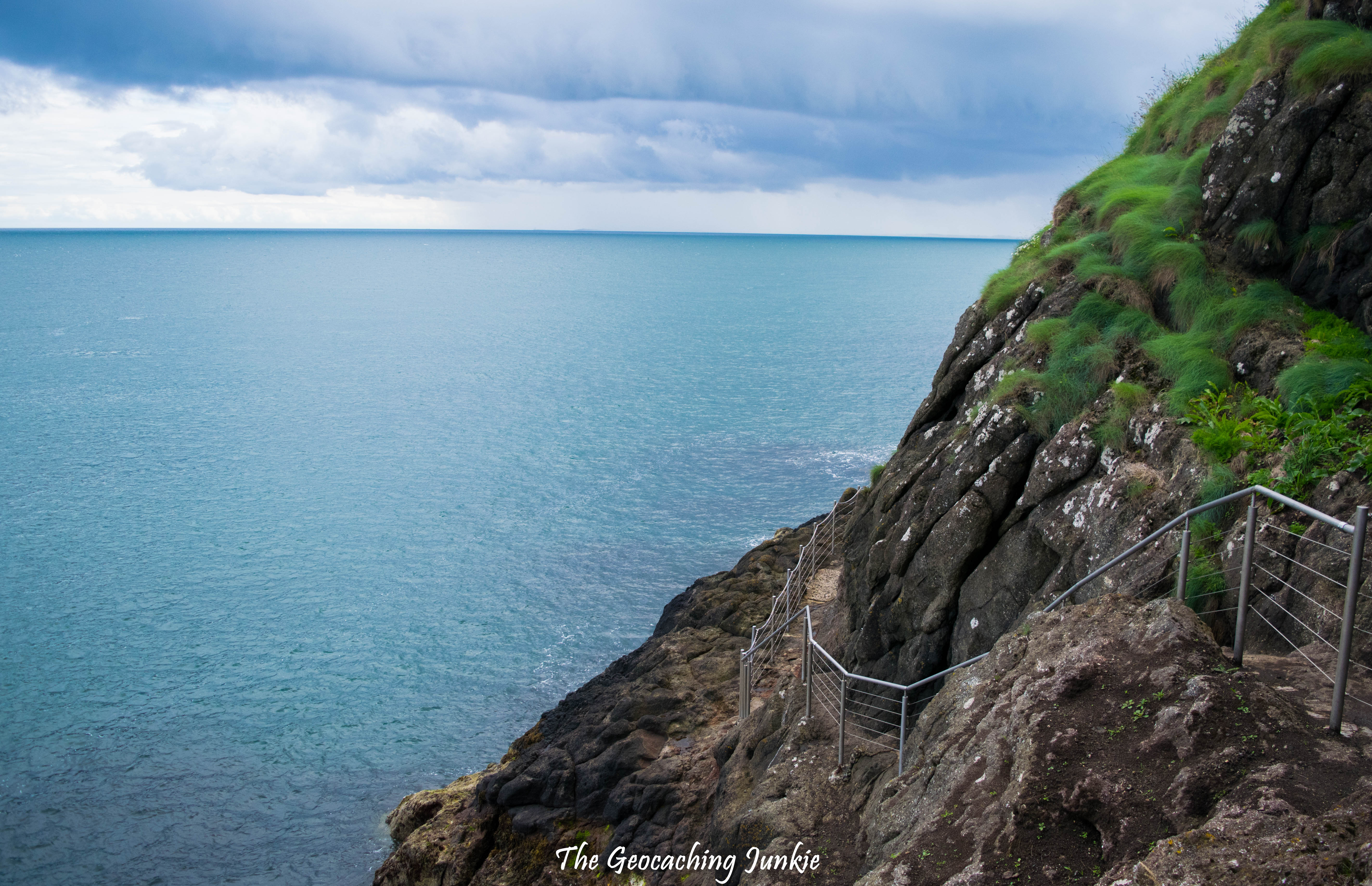 Our knowledgeable tour guide Jill was not only full of history about The Gobbins, but clearly loved her job – it’s not difficult to see why with this dramatic coastal path as her office! 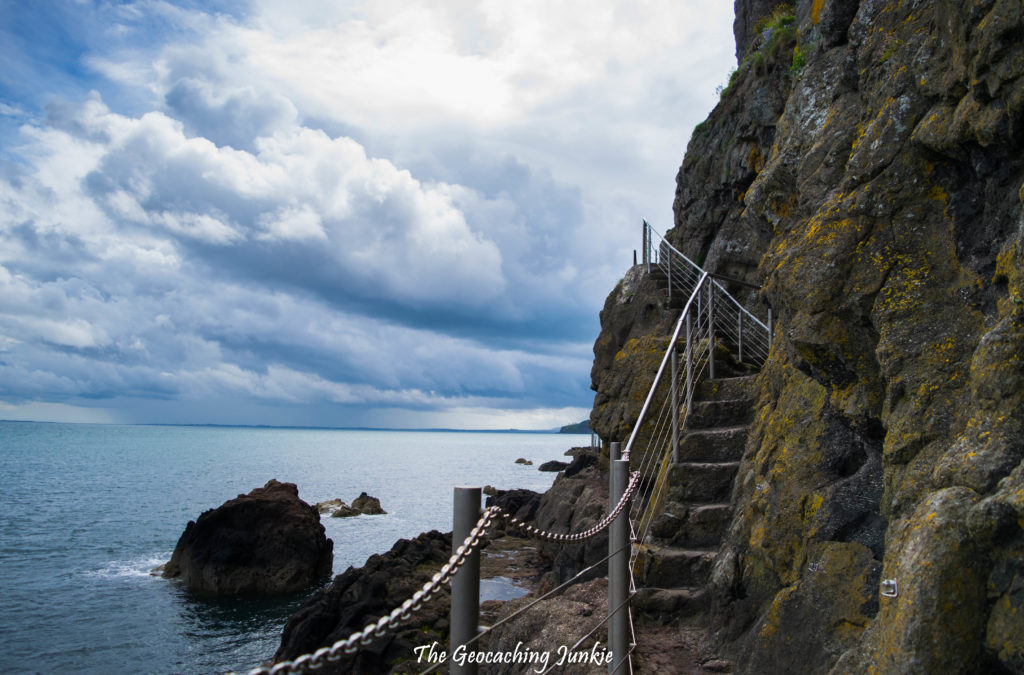 What Goes Down Must Come Up

After thoroughly enjoying the tour and taking, as always, far too many photos, it was time to pay for the fun: we had to get back up to the bus stop! Now I’m no lover of uphill walking but I was glad this part was at the end, so I could collapse on to the bus when I eventually struggled all the way up. I wasn’t the last to reach the top, which is proof that miracles do occasionally occur 🙂 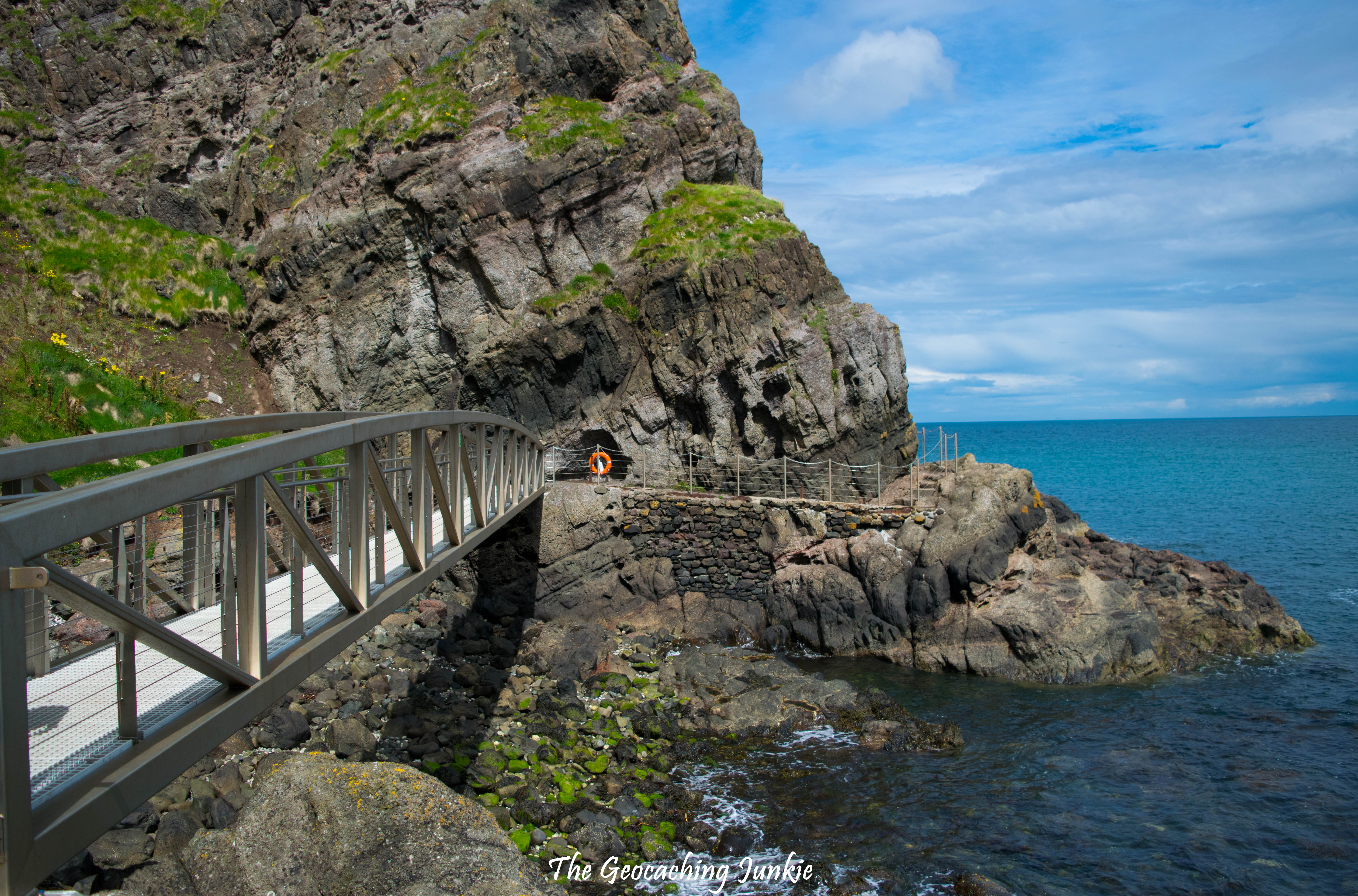 Our luck was indeed in that day as the bus had not yet arrived so I had time to look for and find the geocache at the bus stop! After boarding, some of the heaviest rain I have ever seen arrived in a downpour, accompanied with thunder and lightning. We had blue skies and a warm breeze when we walked around, which is a perfect display of how changeable Irish weather can be!

I highly recommend the walk to anybody. I am not the fittest person but it was entirely doable for me. It’s not a race around or back up to the bus, so you can take your time and go at your own pace. There are some medical conditions that need to be flagged up to the guide in advance, but if you are prepared, it may still be doable. 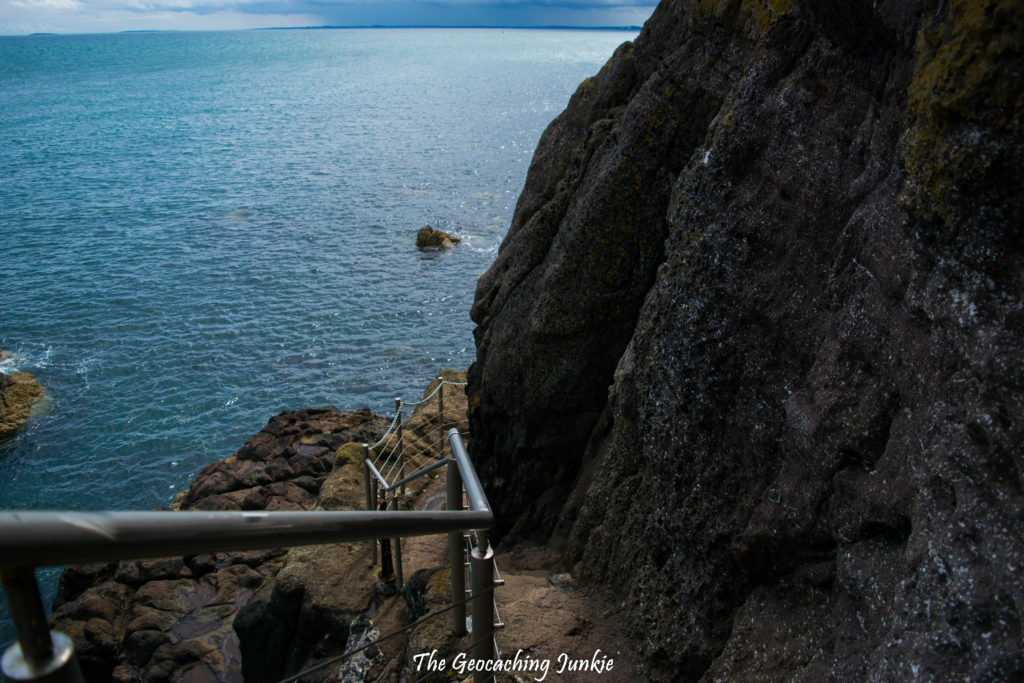 The Gobbins Visitor Centre is located in the townland of Ballystrudder in Islandmagee, County Antrim, about a 40 minute drive from Belfast City Centre and 2 and a half hours from Dublin City Centre. Tickets cost £10 per adult and £8 for children, seniors and students, with family tickets also available.

We will definitely be returning next summer to do the full walk when it reopens. It is without question well worth the mere £10 cost for the experience and one of the best adventures I’ve had this year so far.

4 thoughts on “The Gobbins Coastal Path: July Hike with a Difference | The Geocaching Junkie”