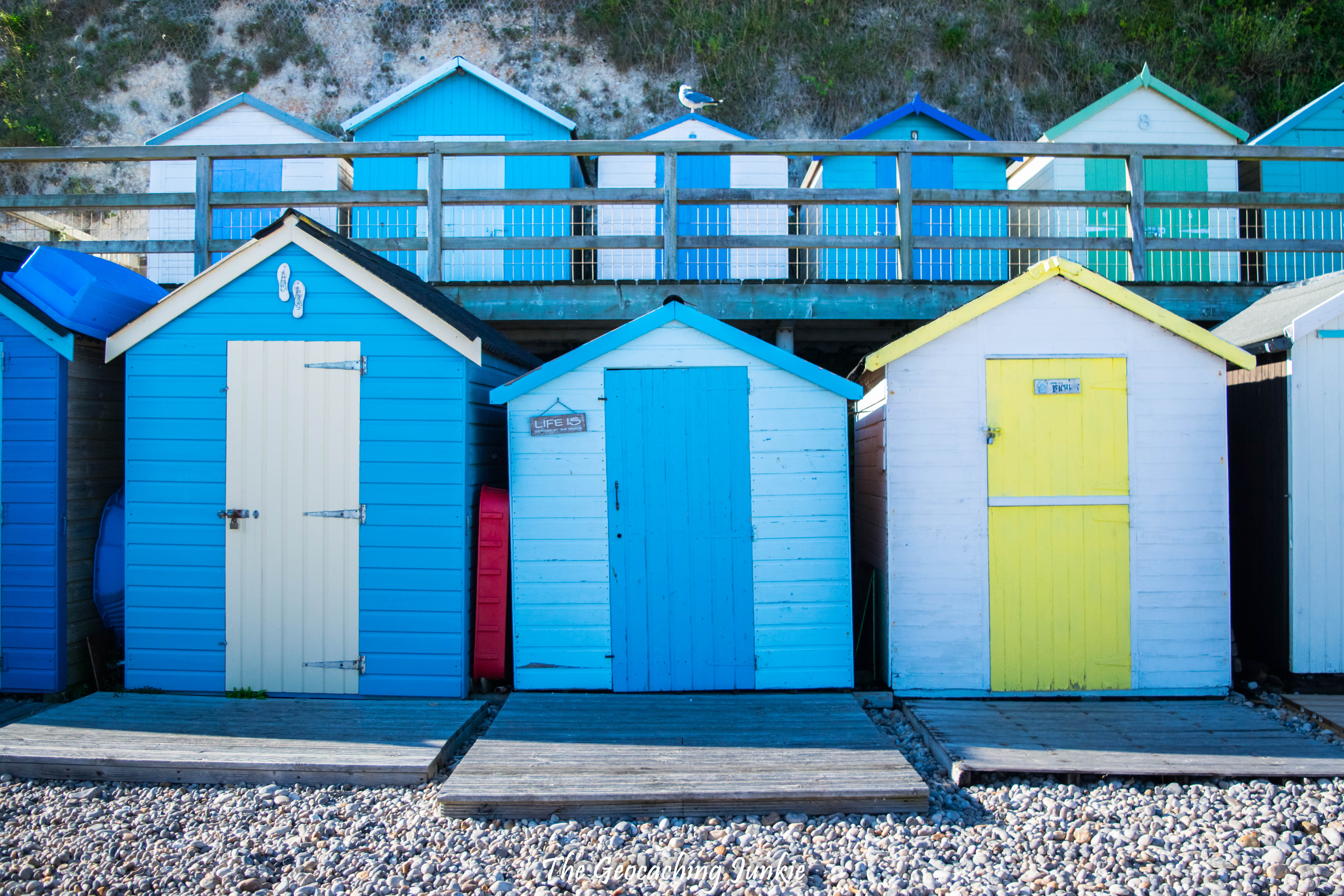 It seems like only yesterday we were camping in a windy valley in Wales for the 2016 UK Mega event, but here I am writing about my brief weekend fling with England’s stunning south coast, after my attendance at the 2017 UK Mega in Devon! The mega is always held on the first Saturday in August, but alas, I must have forgotten that detail when booking my wedding, which I scheduled for seven days later! As a consequence, I had two choices: either miss an annual event I’ve been to every year since I started geocaching, or arrange a flying visit. Of course, I went for the second option – I’d rather briefly be there than miss out entirely, and lucky for me, the muggle husband is an enabler to my addiction!

Since I had the final wedding details to sort out in the weeks leading up to the mega, I didn’t have time for any careful and considered planning whatsoever, so in the week before, I had a quick look at points of interest in the general area and decided to target some of the Jurassic Coast on day one and the Roman city of Bath on day two. It’s amazing what you can cram in to a very short weekend!

After an excruciatingly early flight to Bristol, and a relatively painless experience at the car rental desk, the mother and I were soon zipping down the M5 in the direction of Bicton College in Budleigh Salterton, Devon. Upon arrival, we headed in the direction of a large tent which seemed to be a likely mega location. Our first stop was the trackable table, which had some great contenders for ‘weirdest trackable item I’ve ever seen’ (see in particular the terrifying doll in the baby seat!).

Lock pick caches are becoming increasingly popular in the UK and Ireland recently, and we enjoyed spending some time at the Lock Pick Village trying our hand at some of the easier locks. It is amazing (and somewhat unsettling) to discover how easy it is to open some types of locks!

We soon moved on to the main mega location, where we registered attendance and I picked up my supporters pack, before perusing the many geocaching wares for sale. We then retired outside to try our hand at the lab caches, which were great fun and saw us interacting with lots of other geocachers, as we tried to decipher the required codes: “is that a 1 or an L?!”

In keeping with the rapid nature of the weekend, we only spent a couple of hours at the mega event, but it was great to see it so well attended.

Golden Cap – The Highest Point on the South Coast

THE_Chris joined the mother and I on our jaunt to Dorset and the stunningly beautiful Golden Cap was the first stop. Part of my very loose plan was to visit the EarthCache here and work my way back towards our accommodation in Exeter, doing a few caches along the way. We parked up and started the leisurely walk towards GZ. It was at this point that Chris mentioned the terrain was 3.5. “Oh,” I replied, “I guess I should have checked that.” Anyway, we were committed at that stage so on we pushed. When we started walking quite sharply downhill, I was a bit dubious, knowing our ultimate destination was the highest point on the south coast and that we would definitely, absolutely have to walk sharply uphill again.

Sure enough, we were soon on the uphill trajectory again, but it was mercifully short and the breathtaking views took the edge off the huffing and puffing I had to endure. As soon as I catch a glimpse of an amazing vista, I all but forget the punishing walk I was just complaining about, and this was no different! 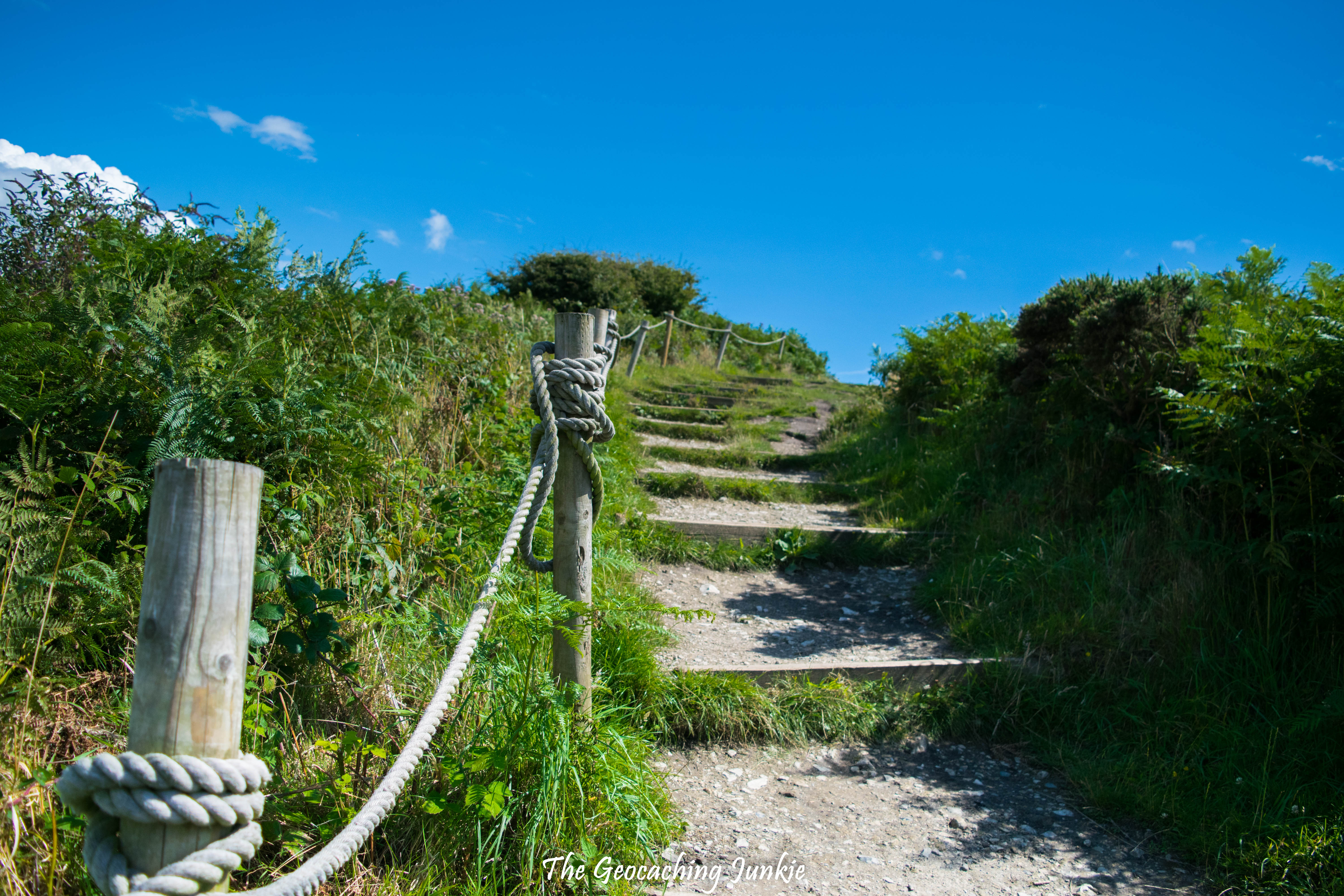 Upon reaching the trig point at the top, I took a moment to drink it all in. The hazy sunshine made the scene both east and west look almost like an oil painting in its vibrant perfection. To the east, the sandy cliffs of West Bay, to the west, the darker cliffs of Lyme Regis, and far below, the English Channel lapping at the jagged rocks. This was, hands down, one of the best geocache locations I have been to anywhere in the world.

Golden Cap – The Highest View on the South Coast!, GC62QXX

Our next stop was the rather charming Charmouth Beach, where holidaymakers packed the pebble beach with an array of striped beach towels and various other accoutrements ranging from the mundane (parasols) to the somewhat sublime (inflatable unicorns). Famished after our unexpected trek up Golden Cap, we quickly sought refuge from the sun in the beach cafe and fuelled up. Alas, the tide timings were all wrong so we couldn’t attempt the nearby EarthCache, nor go on a fossil hunt, so we consoled ourselves with a browse in the fossil shop, where I purchased a decidedly mean looking Devil’s Toenail fossil for just £4, all the while wondering what airport security at Bristol might make of it the next day should they need to search my luggage!

Charmouth draws fossil hunters from far and wide and the local heritage centre even offers guided fossil hunting walks, where ammonites and belemnites can be found in abundance. We were somewhat disappointed that we weren’t able to go on our own fossil hunt but time was running out and we needed to move on to our next seaside stop.

The next location on our whistle stop tour of the Jurassic Coast was yet another seaside resort: Lyme Regis, at the Dorset-Devon border. The popular holiday spot is another renowned fossil paradise; famed fossil hunter and paleontologist Mary Anning hailed from here.

Fossil seekers can partake in guided walks from here too, and these are arranged from the Lyme Regis Museum. Alternatively, you can do like we did and take a ramble over the pebble beach with your eyes firmly looking down. The best time of day is when the tide is out as the most fossils are revealed.

Fossil hunting can be hard work, so enjoying an ice-cream from a nearby shop is highly recommended 😉

Our last Jurassic stop was Beer… the place and not the beverage (that came later back at the hotel!). It was nearing the end of the day at this stage and the beach was decidedly more calm than Lyme Regis and Charmouth had been, as the sun worshippers packed up their lilos and headed home.

The tagline on the Visit Beer website is ‘A Little Piece of Heaven’ – I have to agree. Darling beach huts stand shoulder to shoulder against the cliff face, looking out at the calm sea lapping the shore, coming within a stone’s throw of the quaint old-fashioned deckchairs, arranged haphazardly having been hurriedly abandoned by earlier beach goers. 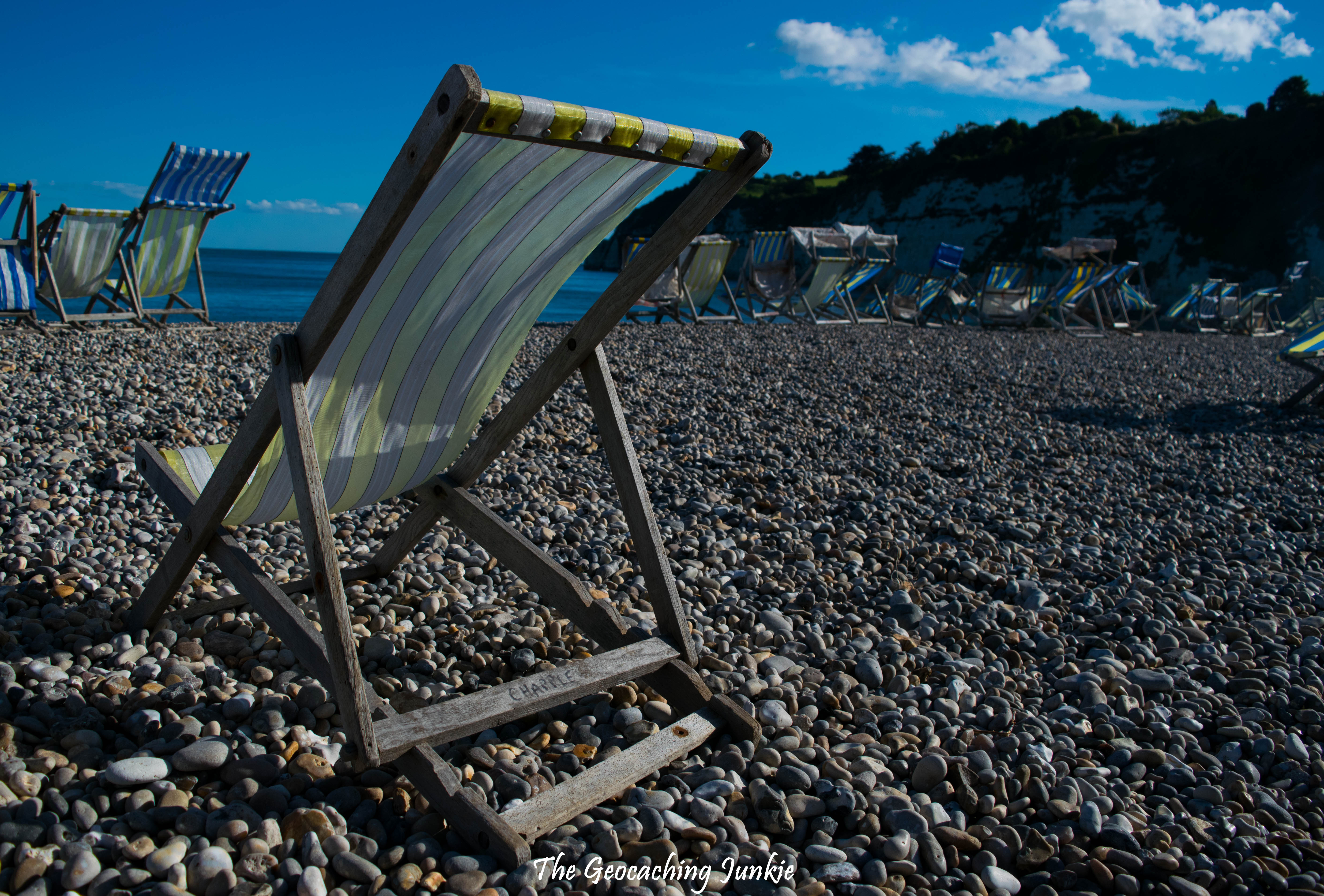 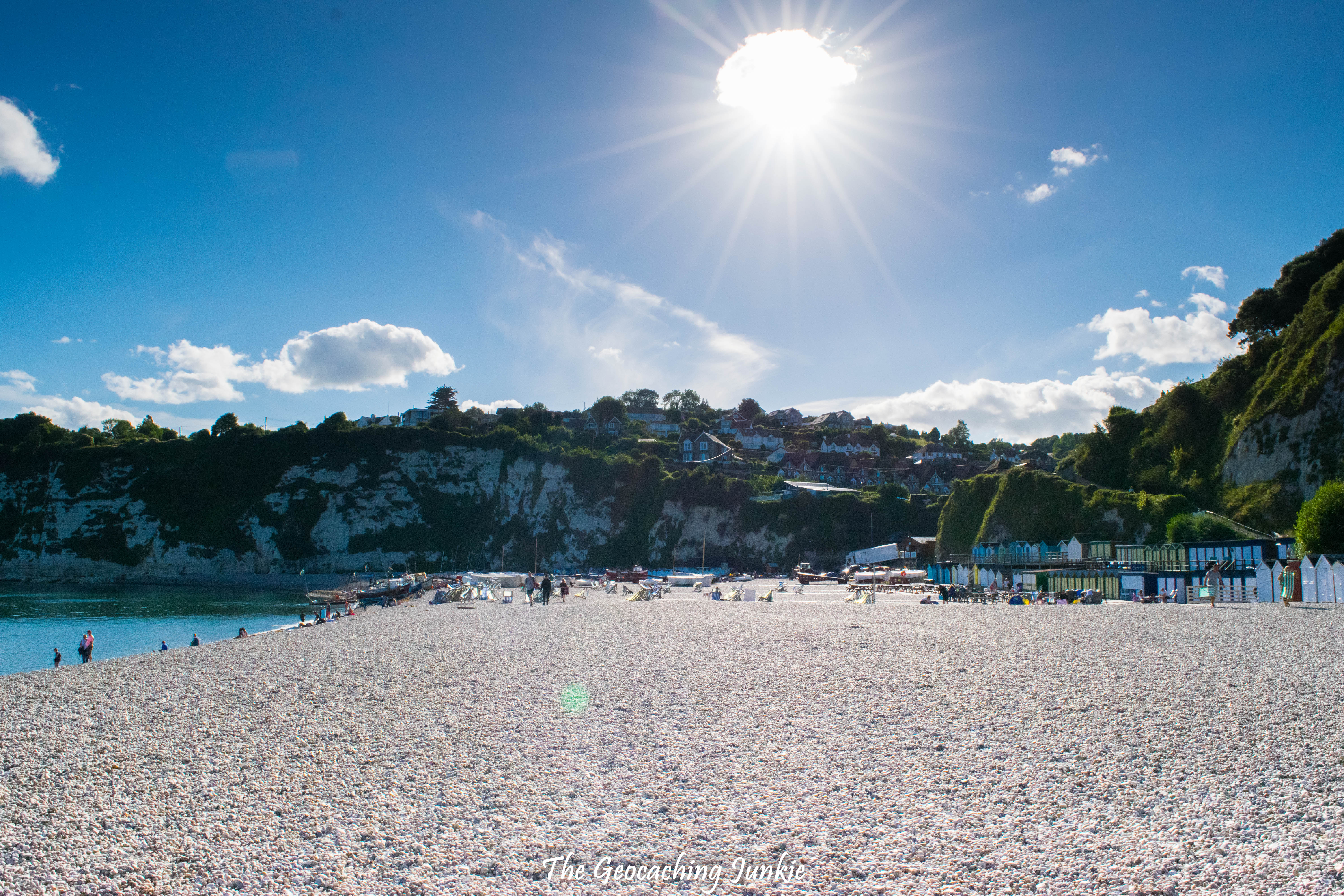 As with many places I’ve fleetingly visited, I would love to explore more of this amazing coastline and do a guided fossil hunt, to really get the most out of the experience. Have you ever found a fossil in the wild? Let me know in the comments!