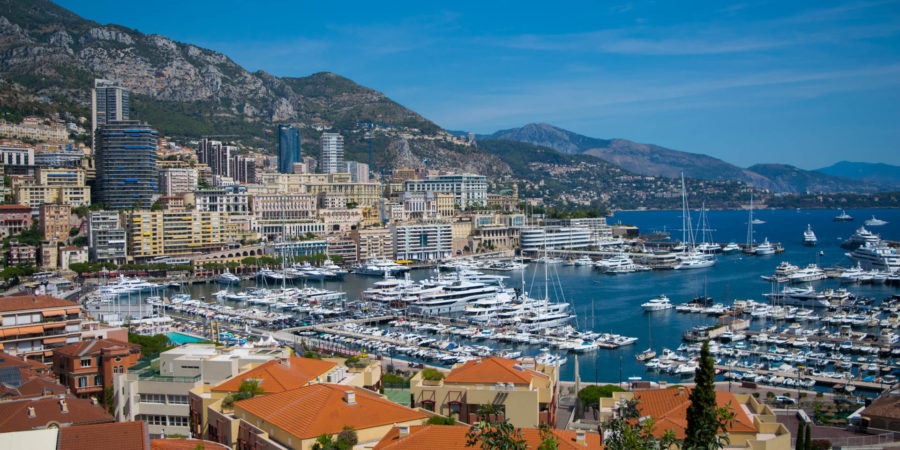 ‘Budget holiday’ is not the phrase that springs immediately to mind when you think of Monaco, the tiny principality perched along on the French Riviera. The second smallest country in the world is also one of the richest, with almost one in three residents classed as millionaires! You’d be forgiven for thinking that such a wealthy playground would be way too expensive for the average Joe’s wallet, but we were pleasantly surprised to discover that it’s relatively affordable, with a little bit of forward planning and shopping around. There is also plenty to keep you busy within the 2km² of the tiny principality, without having to remortgage your house to enjoy it! 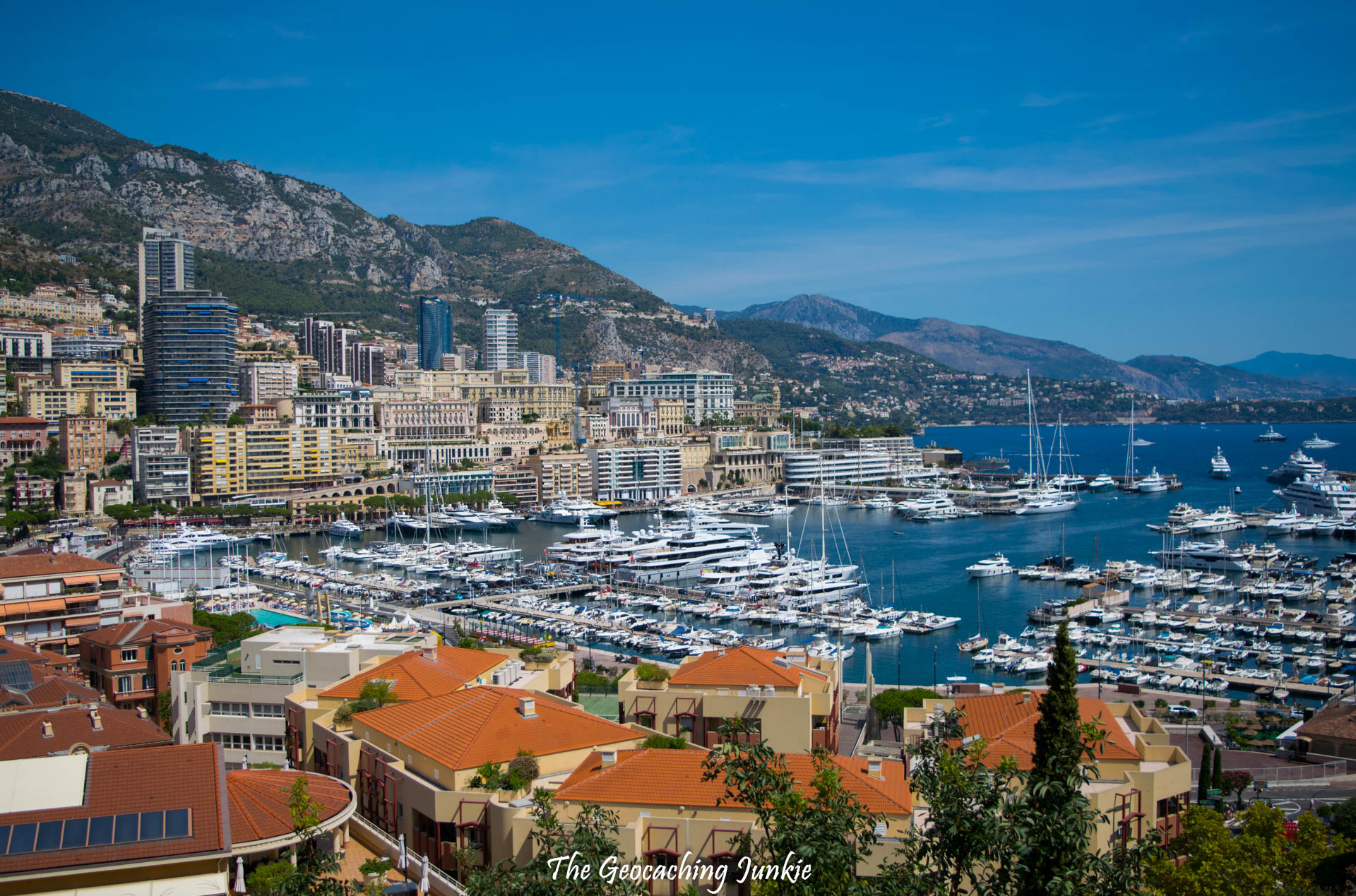 Flights from Dublin to Nice in August with Ryanair cost us €125 per person and the airport is about a 30 minute drive to the centre of Monaco.  If you don’t like the heat, visit in spring or autumn and enjoy cheaper flights, but bear in mind some of the attractions like the State Apartments of the Prince’s Palace are not open off season.

Accommodation that won’t break the bank

We booked our trip to Monaco in February – six months before we travelled. Of course, there are lots of hotels that are way out of our price range, so I spent a good half hour browsing longingly through those. We paid €145 per night for a double room at the Hôtel de France, located 5 minutes from the Prince’s Palace in one direction and 5 minutes from Port Hercule in another direction. It was quiet, basic but comfortable and the location was perfect. 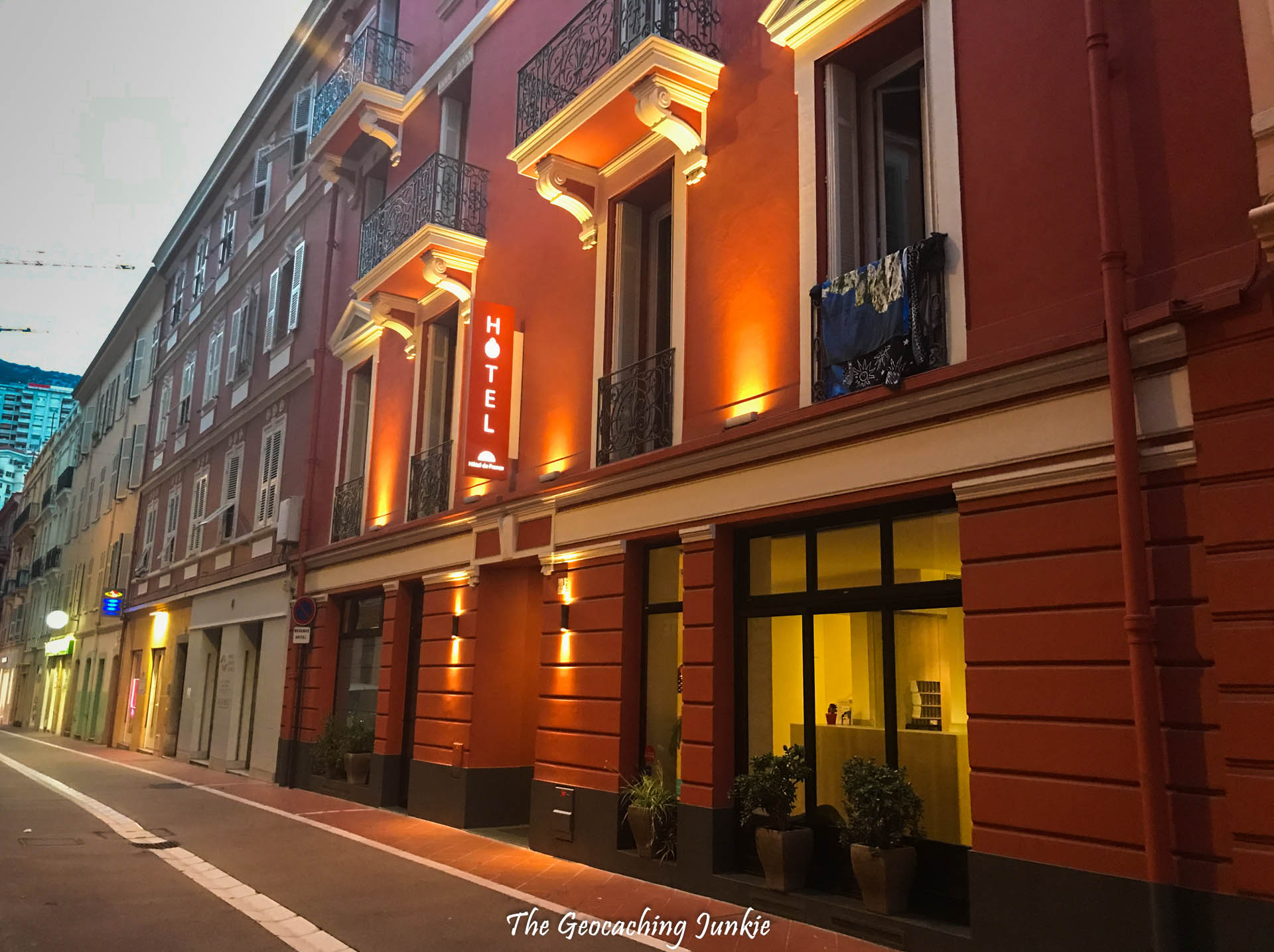 We were pleasantly surprised at the number of things to do within the tiny city state. First on our list was a visit to the Prince’s Palace. Tickets can be purchased at the ticket office adjacent to the State Apartments, and there are some ticket combinations you can purchase to save money. Entry to the State Apartments, the Private Car Collection of Prince Albert II and the Oceanographic Museum can all be purchased from this ticket office. We combined the State Apartments and the car collection for a price of €11.50 per person, which is a very reasonable fee for what is essentially two unique museums (we have paid far more for far less interesting attractions elsewhere). 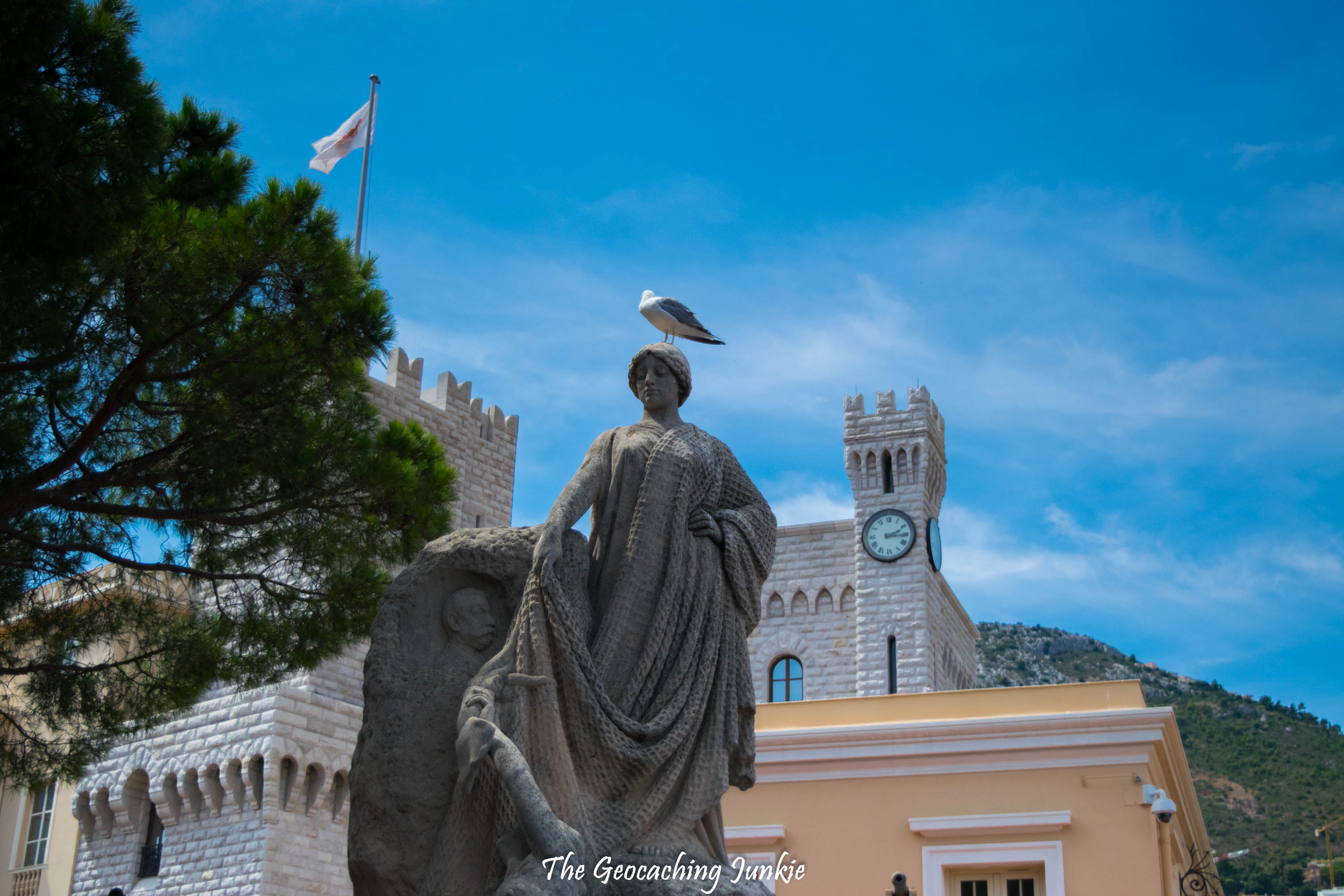 The State Apartments are open to the public from April to October every year. The entry fee includes an audio tour, which guides you through opulently decorated rooms like the amazing Blue Room, so-called for the blue silk brocade adorning the walls, and the magnificent Throne Room, which is home to several family portraits. Photography inside the house is unfortunately strictly forbidden, as the building is still the home of the royal family.

For a free bonus, make sure to check out the traditional changing of the guard ceremony at 11:55am, though you’ll want to get there nice and early to get a spot close to the rope. 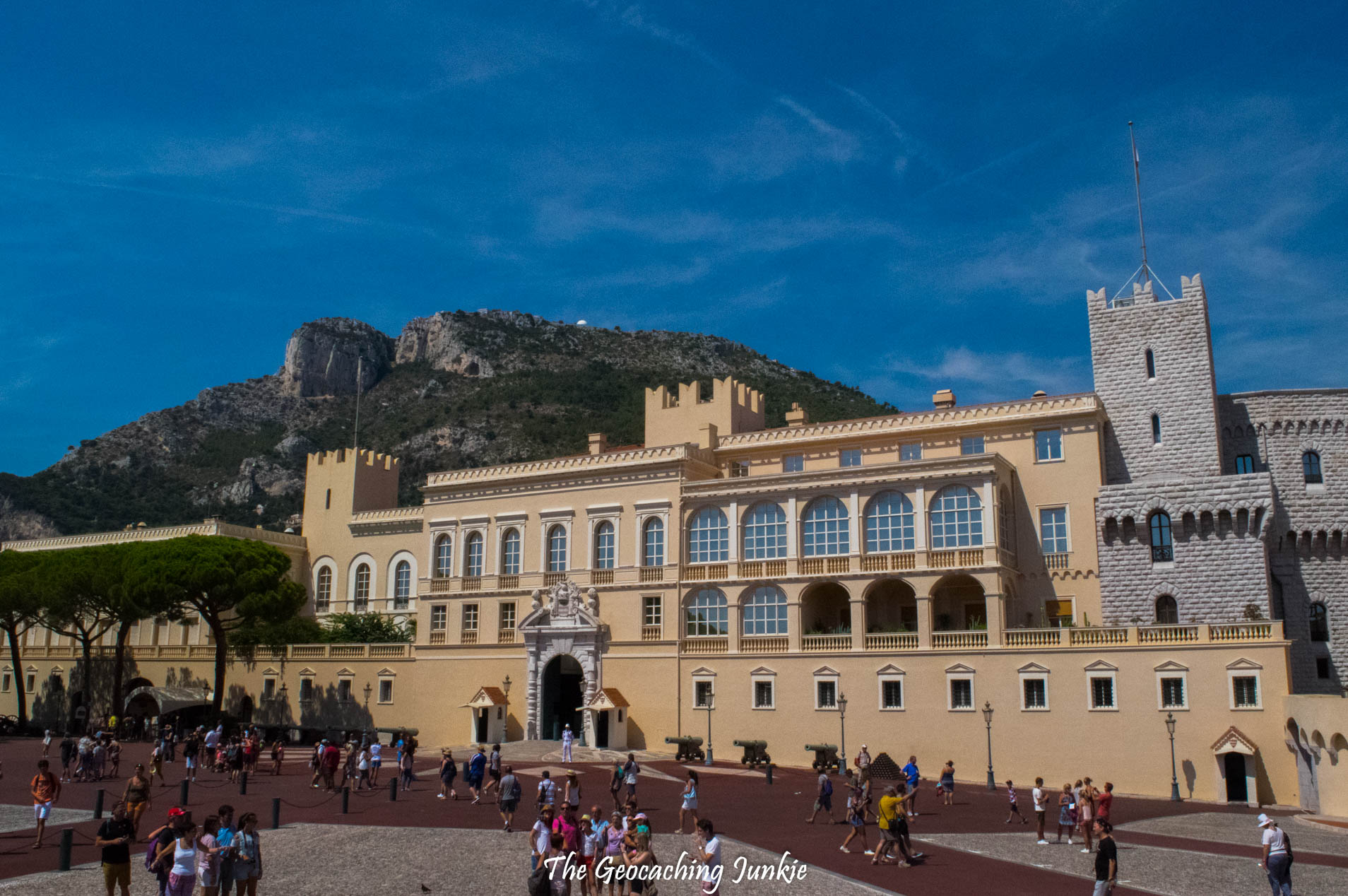 The private car collection of Prince Albert II is about a ten minute walk away from the Prince’s Palace and while you might consider skipping it if you’re not a car aficionado, it’s definitely worth a visit if only to witness the ridiculous wealth on show, with cars ranging from a 1903 De Dion-Bouton to Bentleys, Daimlers, Ferraris, several Formula One cars and lots in between. 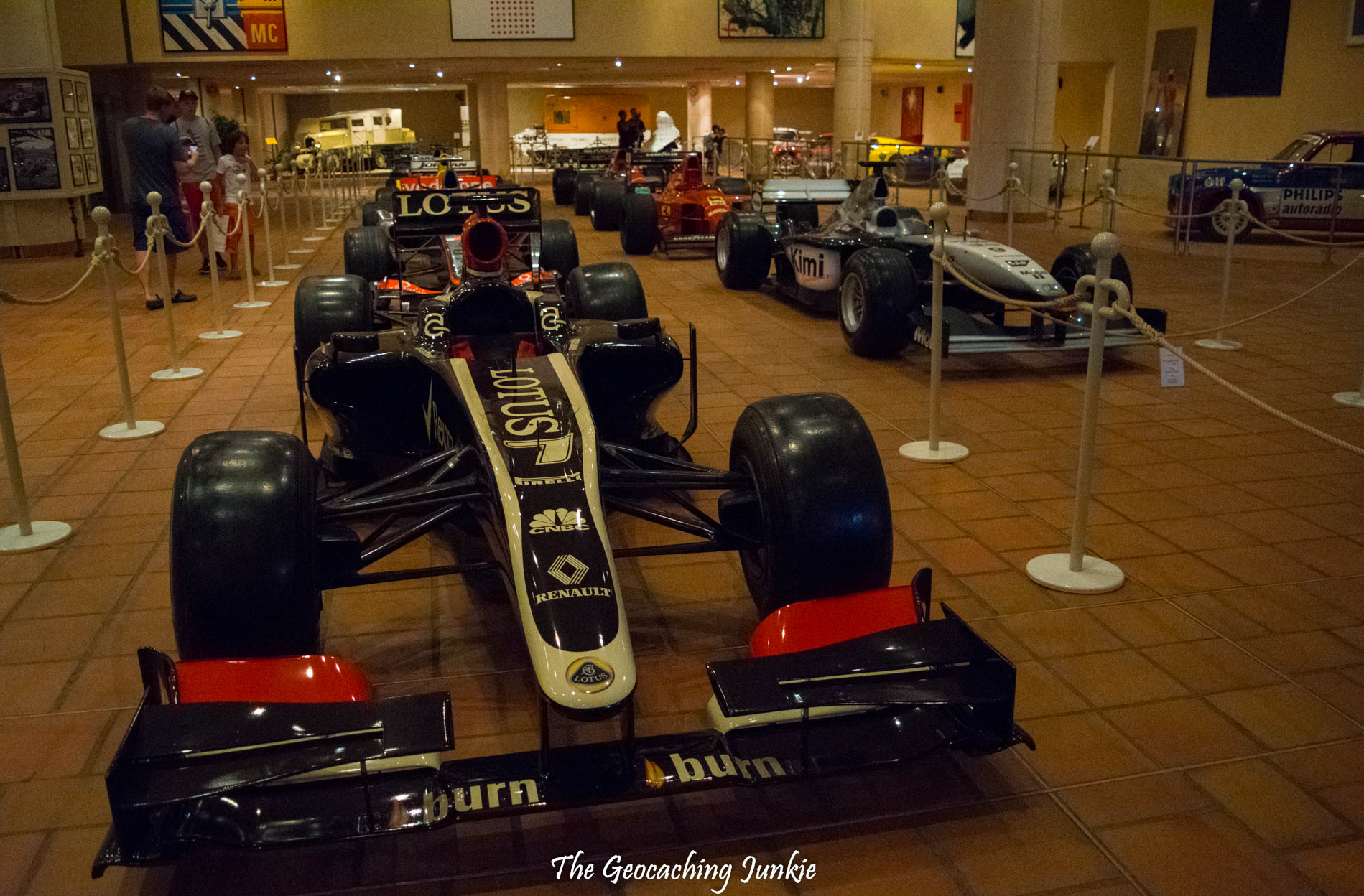 The Oceanographic Museum was an unexpected highlight of our trip. I’ll admit that wedding planning meant that I didn’t do much advance research on our visit to Monaco before we got there, but having seen the museum advertised in a few places, I decided to have a look online. The fact that it had a sea turtle was enough to convince me it was worth visiting. The museum has a very impressive aquarium in the basement, with thousands of fish in about a hundred tanks, the largest of which is a floor to ceiling tank, which is home to Rana the loggerhead sea turtle! 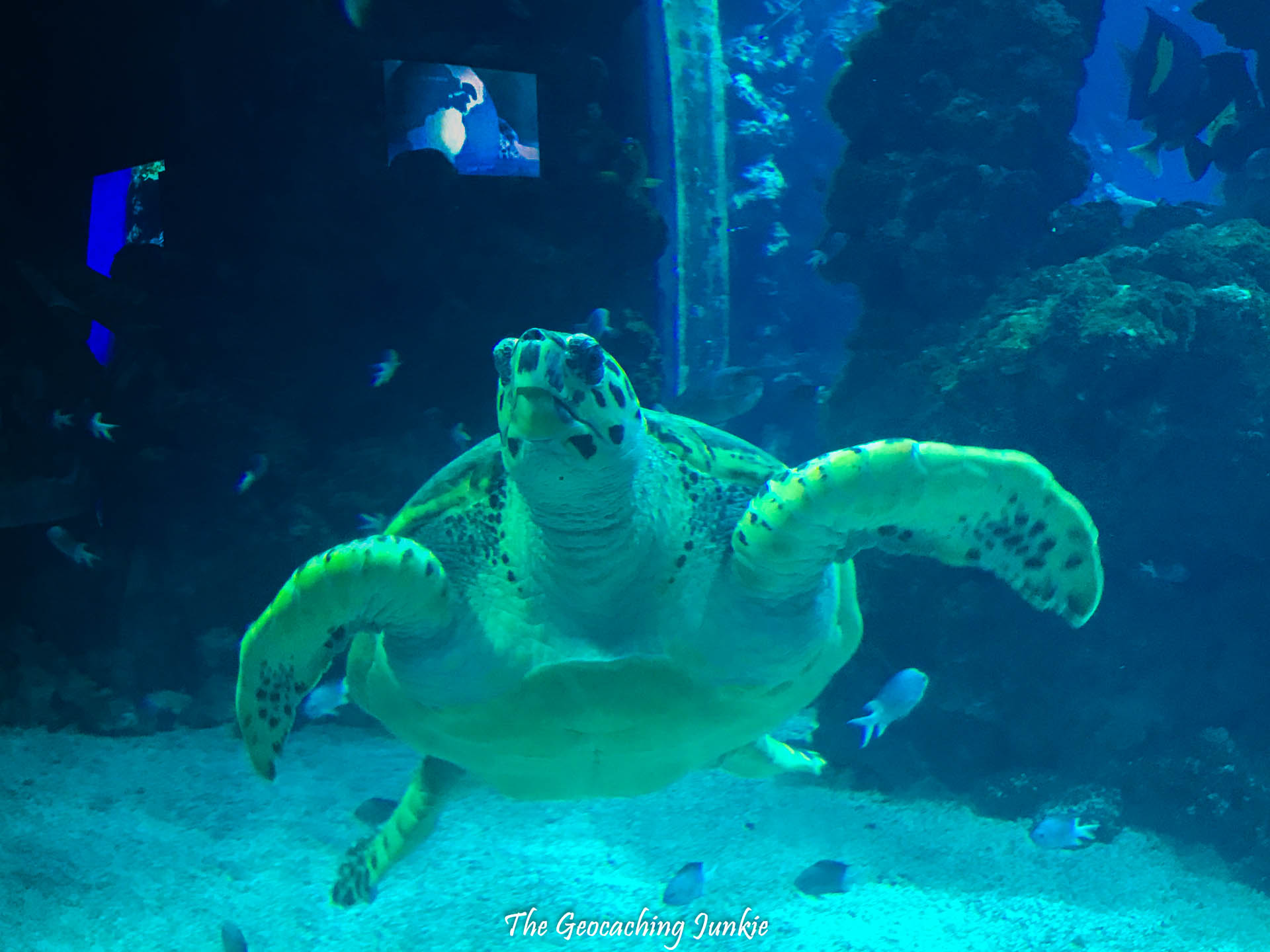 Upstairs in the museum, there are various fascinating collections and exhibitions related to marine life and science. On the roof, there are great panoramic views and at the time of writing, an enormous silver shark as part of the Borderline exhibition by French contemporary artist Philippe Pasqua. 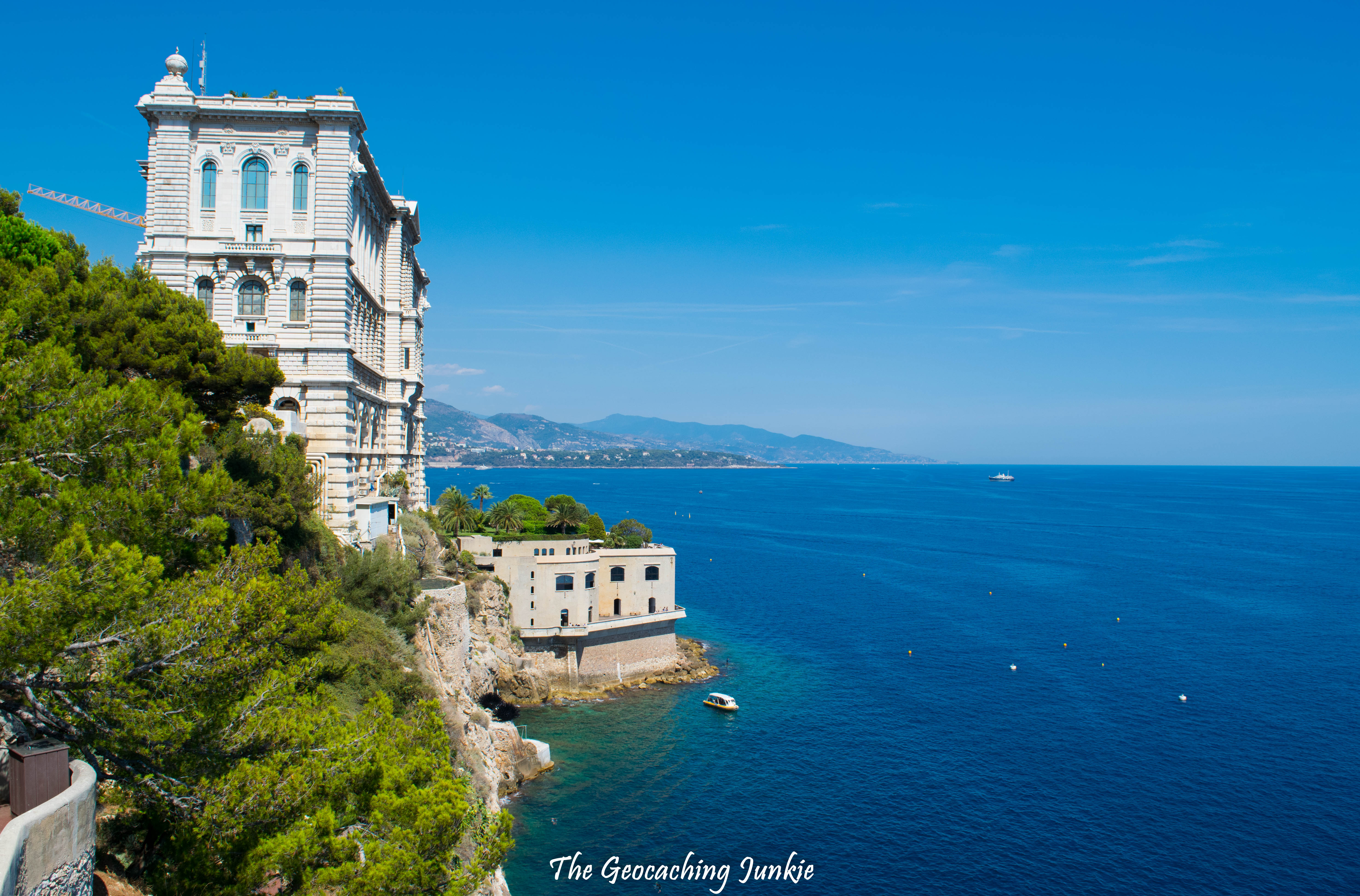 Walking around a botanical garden may not be everyone’s idea of fun, even if that garden is set on a cliffside with magnificent views over Monaco, but the Jardin Exotique is also home to the impressive Grotte de l’Observatoire, a phenomenal cave deep in the Monegasque landscape. The cave can be visited with a tour guide and has an abundance of magnificent stalagmites and stalactites. The entry fee is very reasonable and the cave is well worth a visit, even if you’re not interested in the gardens. 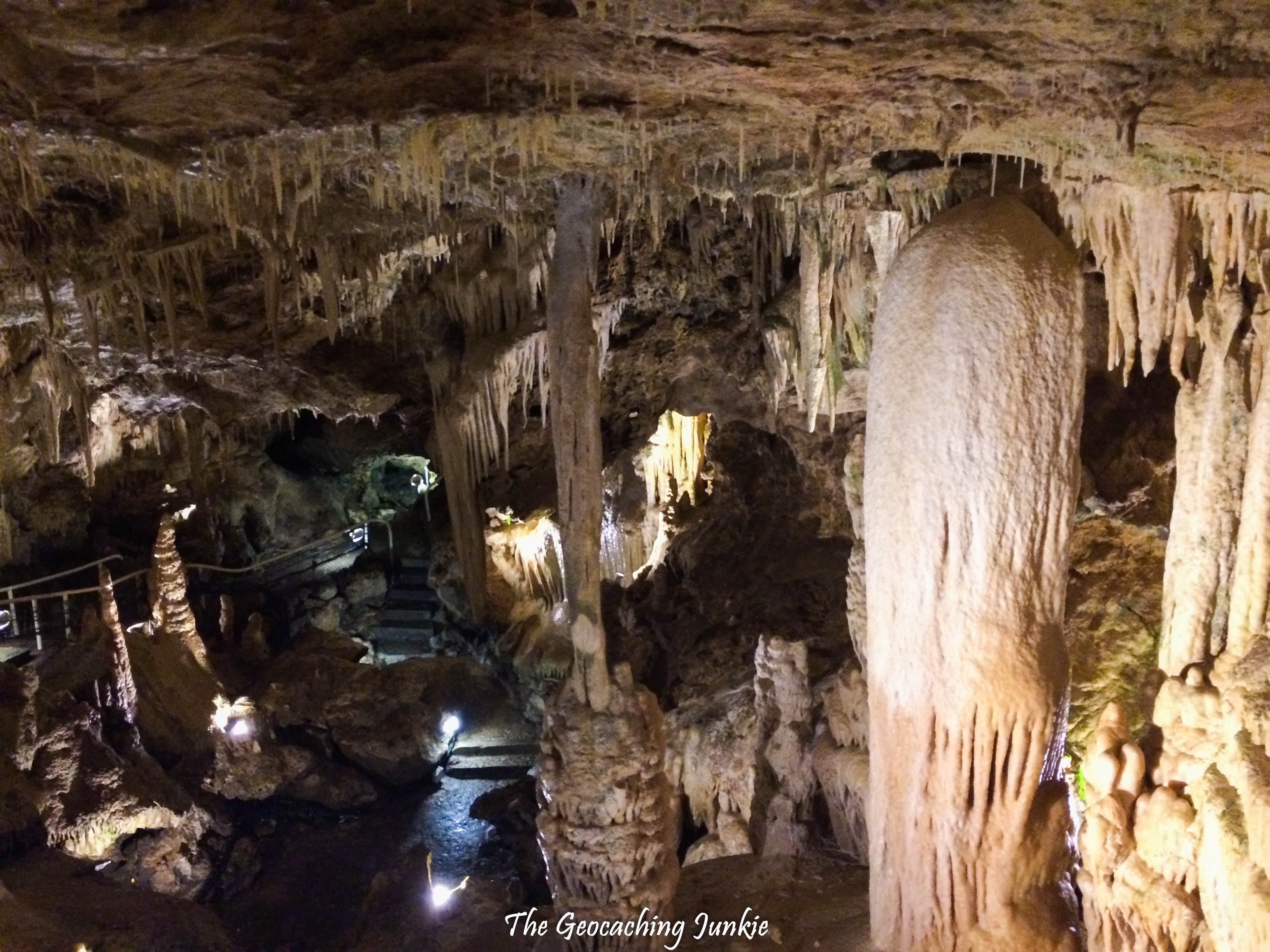 Geocachers will definitely want to visit the cave to complete the Grotte de l’Observatoire EarthCache, which was voted Geocache of the Week, shortly after I first visited in late 2014. It is definitely an earth science lesson you won’t forget in a hurry! 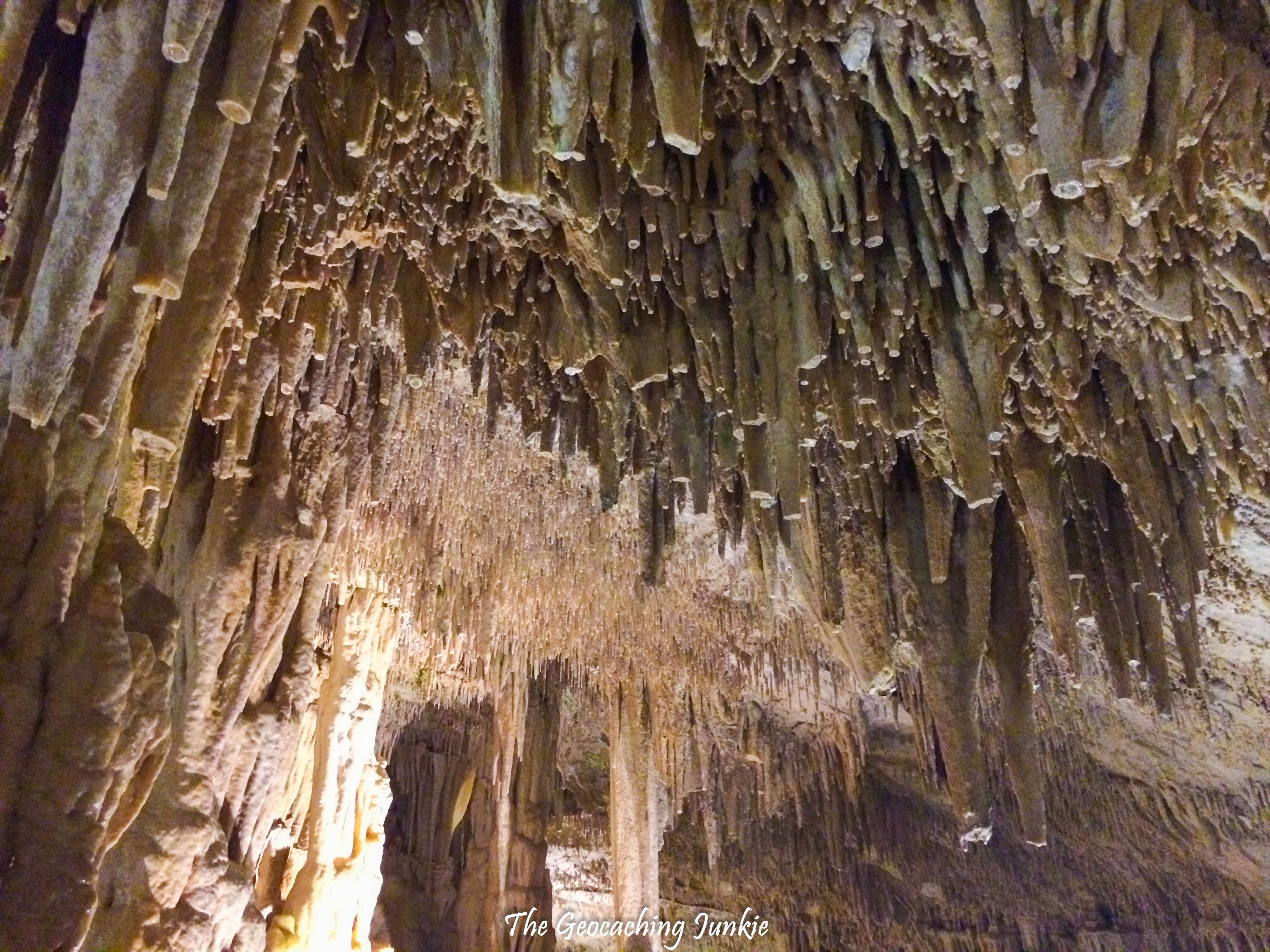 While the above tourist hotspots are definitely budget-friendly, there are also a few things you can enjoy for free in Monaco.

The Roman Catholic Cathedral in Monaco-Ville is, like many buildings in the tiny principality, both opulent and impressive. It’s located just a short walk from both the Prince’s Palace and the Oceanographic Museum. Beside the altar, you’ll find the grave of Princess Grace of Monaco, in front of a portrait of her and Prince Rainier II on their wedding day. Prince Rainier is buried next to the princess, but the Hollywood starlet’s final resting place is where everyone tends to stop. 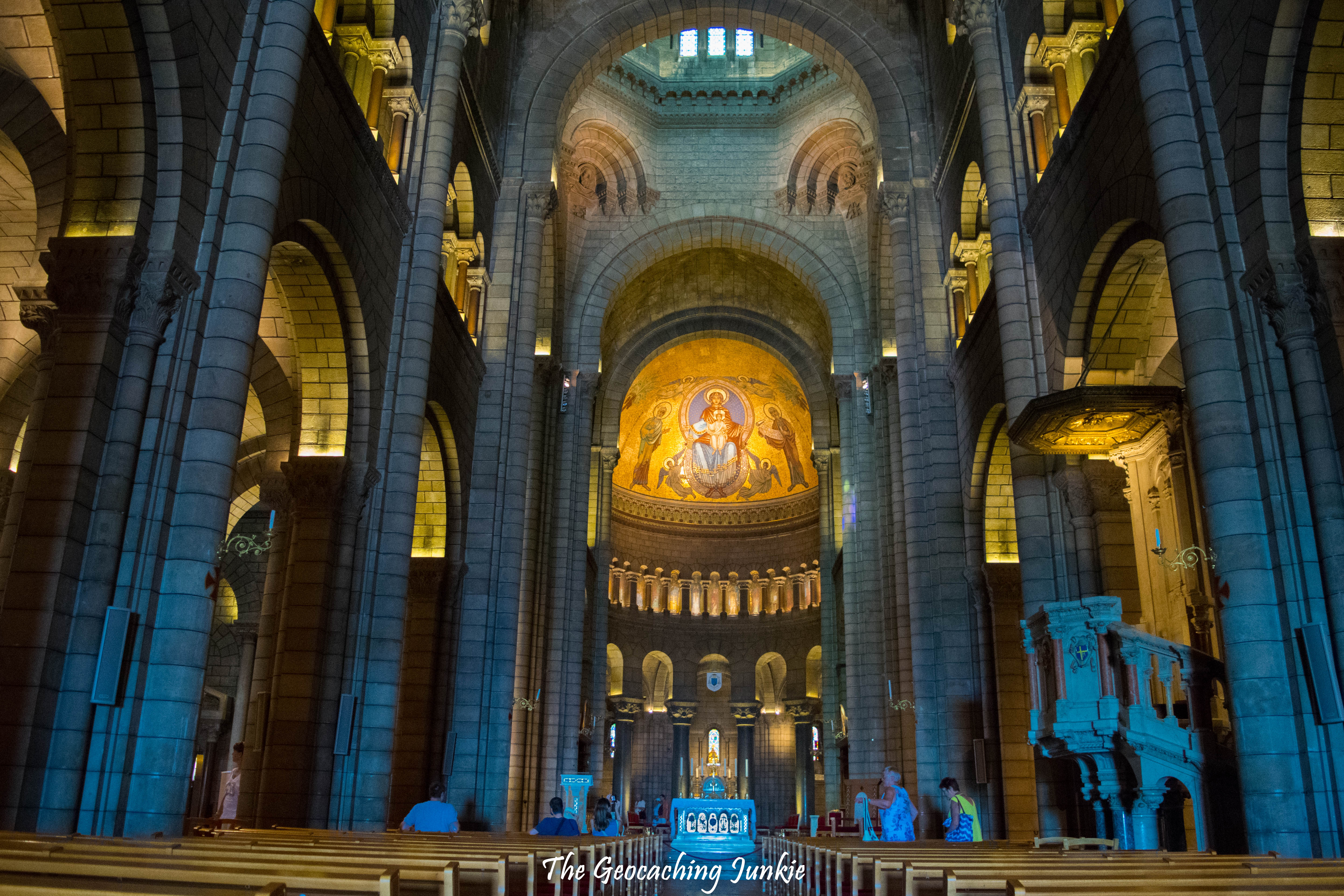 One of the major events that Monaco is famed for is the Monaco Grand Prix, widely considered to be one of the most prestigious races on the planet. It takes six weeks for the streets of Monaco to be transformed into a race track, complete with viewing podiums and pits. If you’re an avid F1 fan, you’ll easily recognise certain points like the Rascasse hairpin bend and the tunnel. Geocachers can follow the series of caches entitled Grand Prix de MONACO to guide you around the route hotspots. 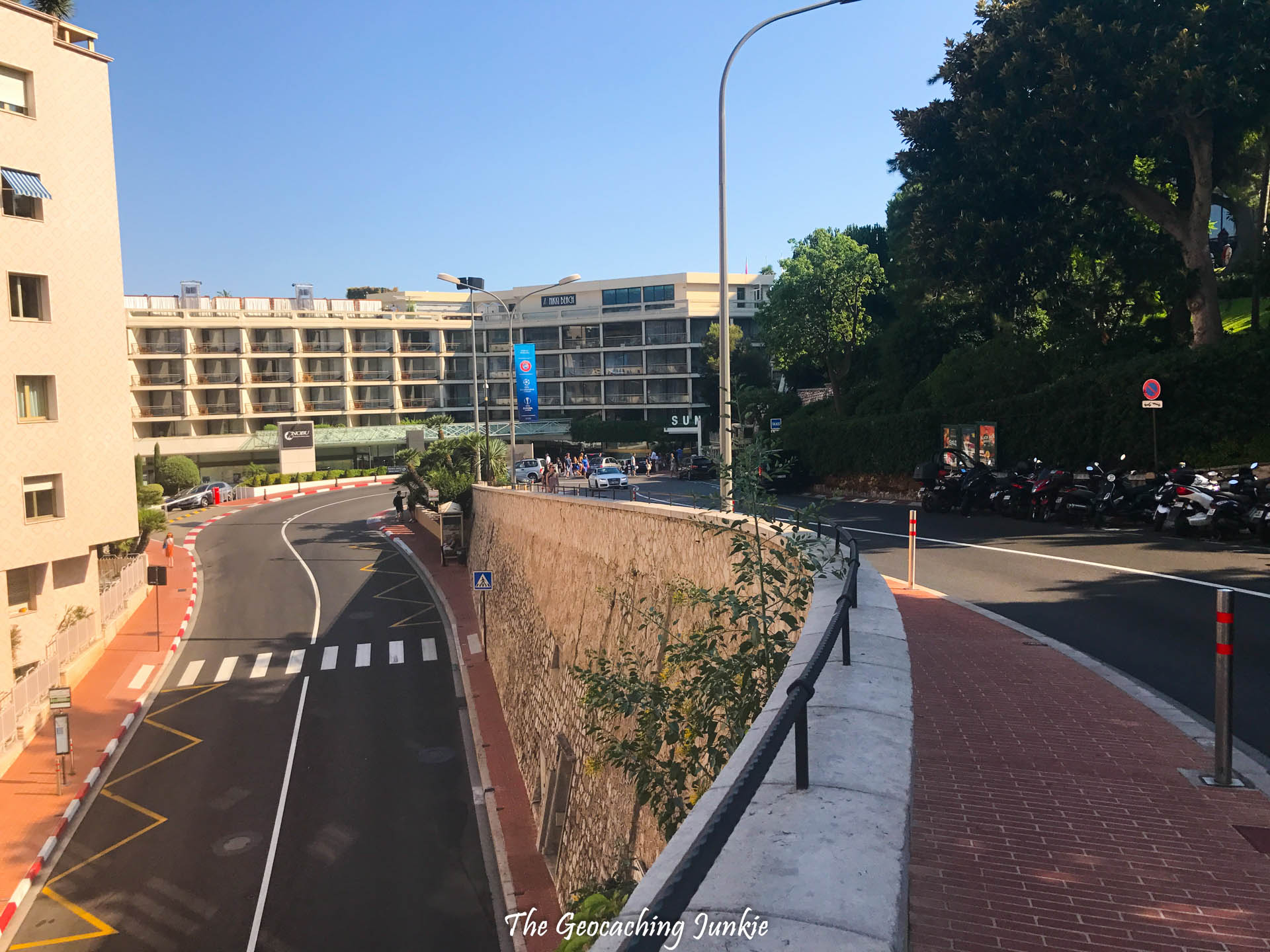 Port Hercule is packed with some of the most amazing yachts you will ever see; veritable mansions on the sea. Go for a walk around the port and try to find the biggest super yacht there. 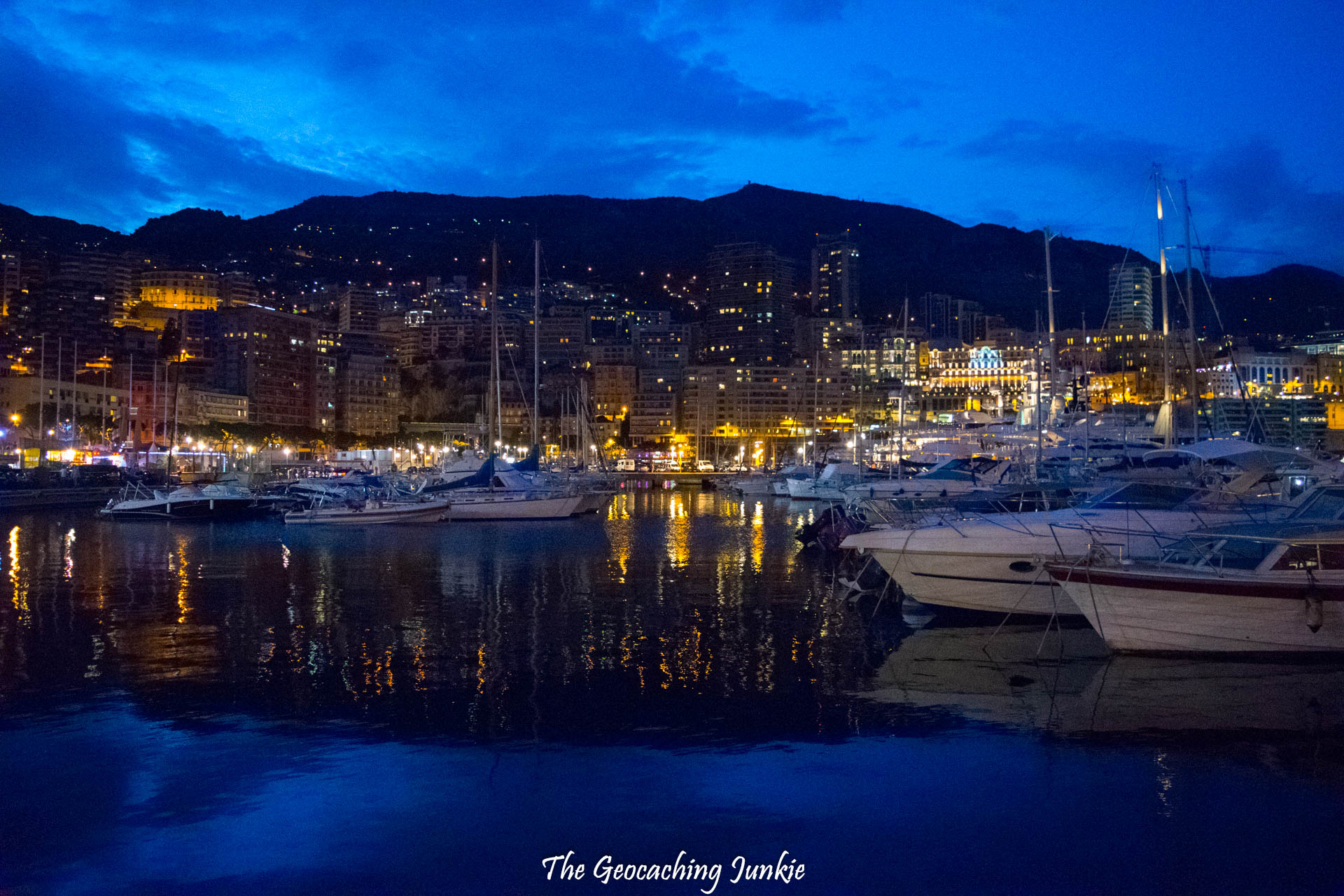 Near the Stade Louis II stadium, is the Princess Grace Rose Garden, which was opened in 2014. There are QR codes next to each rose variety so you can discover all about the roses, which include the Grimaldi Family Rose. The garden is a quiet oasis away from the hubbub of Fontvieille and Monaco-Ville. 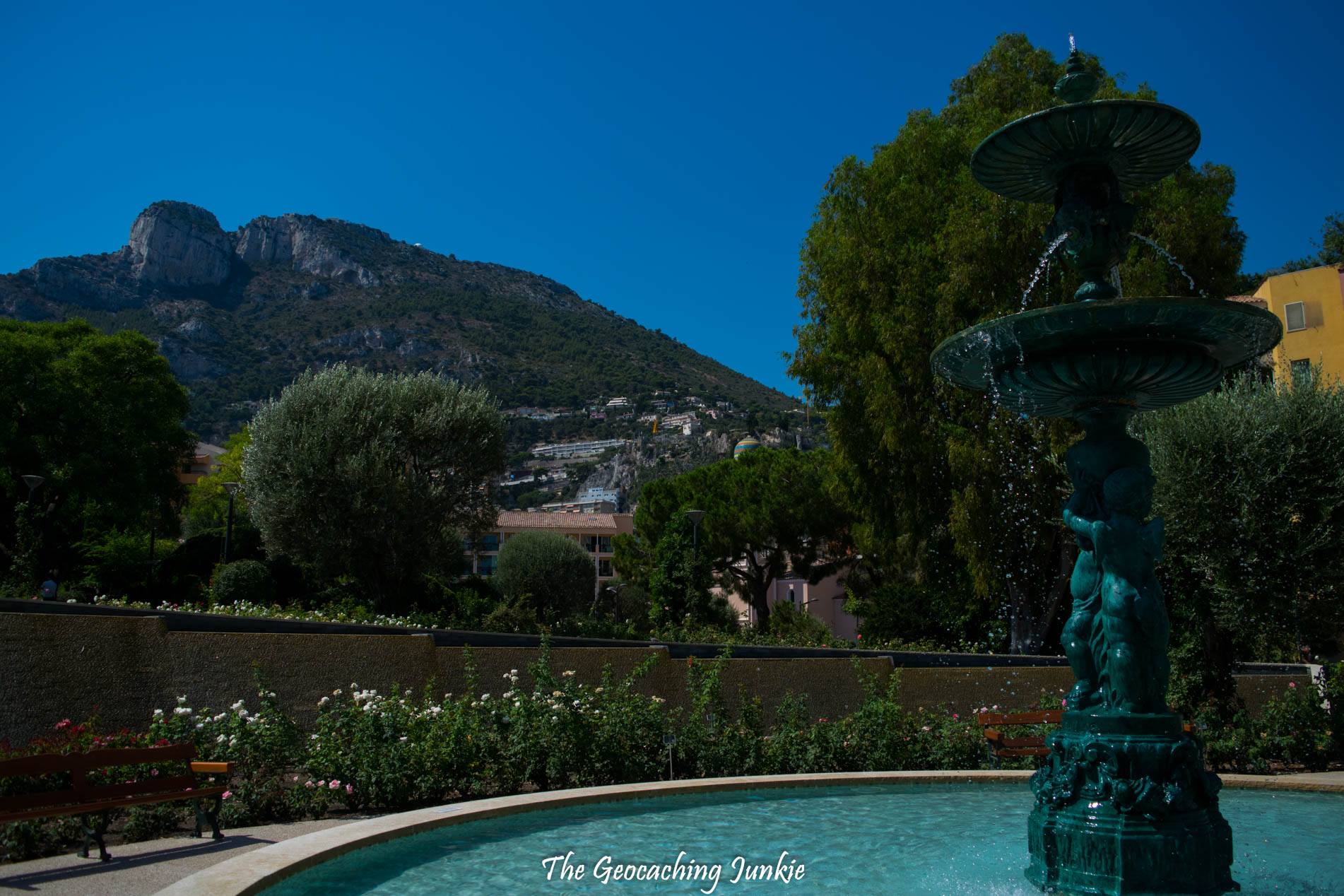 Monte Carlo is the jewel in the extremely wealthy crown of Monaco. Designer shops, ridiculously expensive hotels like the Hôtel de Paris, and of course the world famous casino all ooze grandeur and money. You’ll spot expensive cars everywhere in Monaco, but there is a concentration of them in Monte Carlo, particularly around the casino area. Stare in wonder through the designer windows or sit yourself outside a café with a cappuccino and see how the other half live. 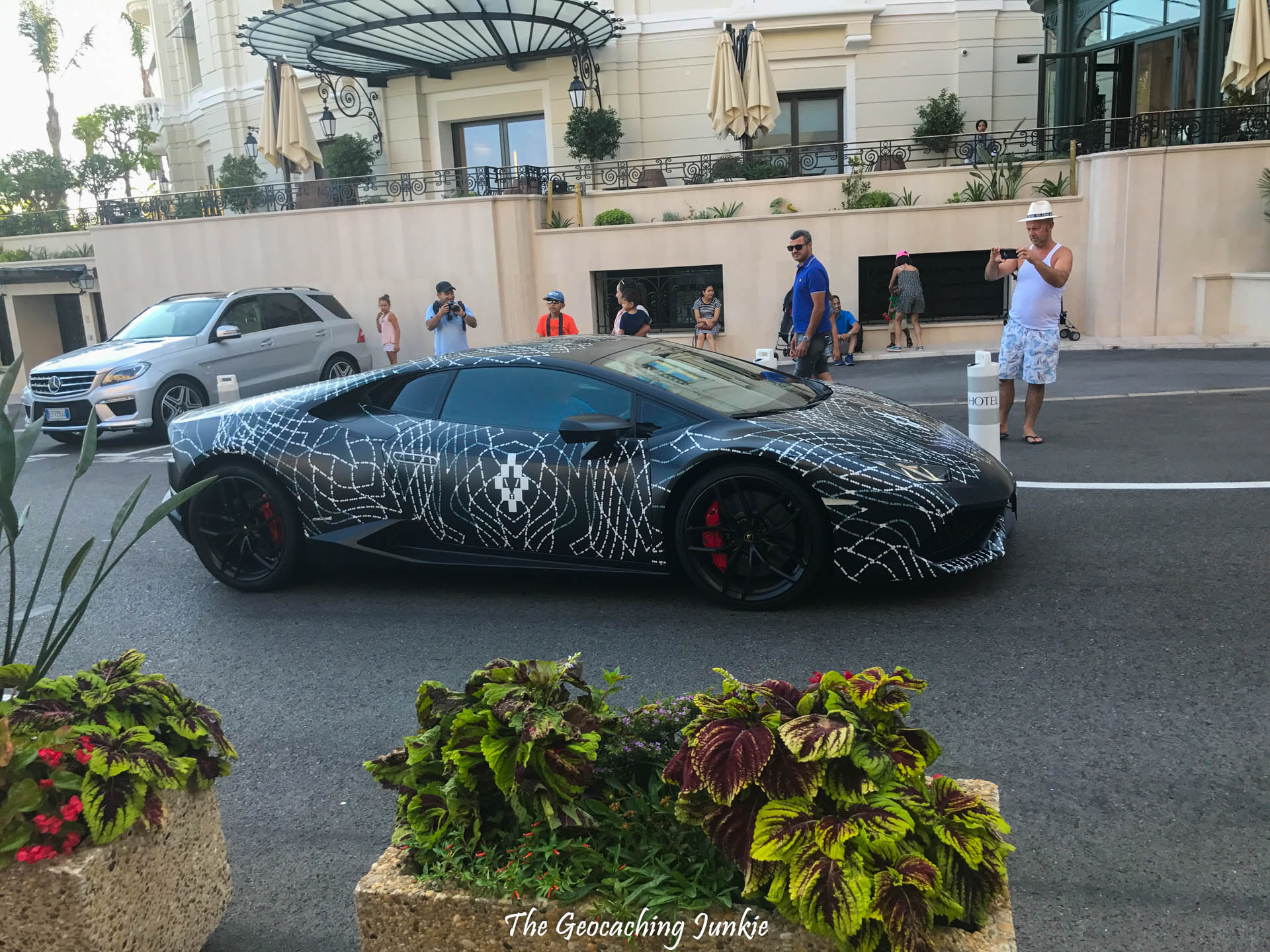 Film buffs won’t want to miss the famous Casino de Monte-Carlo, which features in several James Bond films, as well as the 2004 movie Ocean’s Twelve. It’s free to enter the foyer and there’s a café where you can sit and have ice-cream or coffee. If you want to go in to the casino proper, the entrance fee in peak season is €17 per adult. Interestingly, Monaco residents are not only not allowed to gamble, they are not even allowed to set foot in a casino unless they work there! Foreign nationals are, however, exempt from this law. 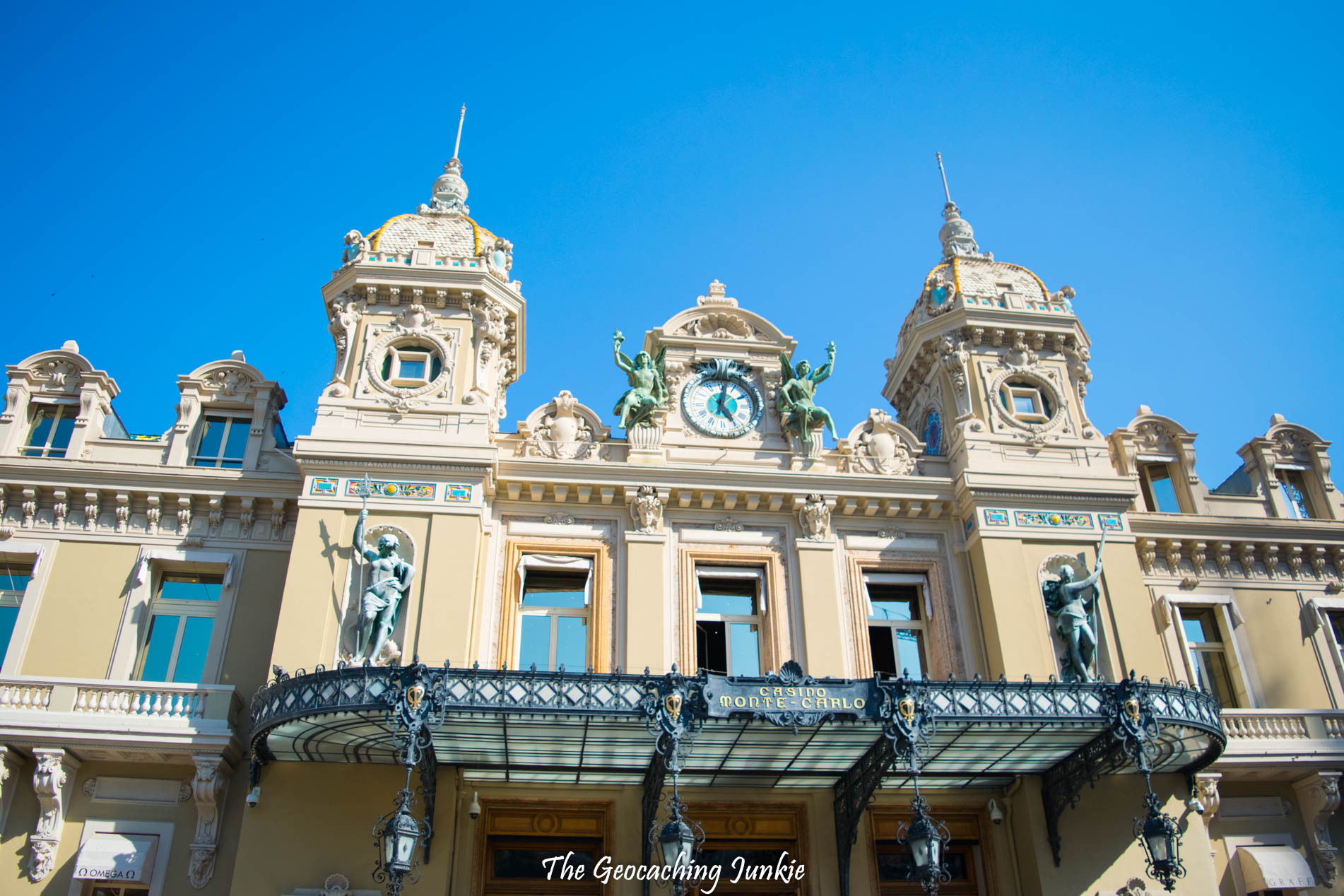 If you like gardens, you’re in luck because there are several really nice examples in Monaco. The Japanese Gardens are a work of art, with bridges, lakes, waterfalls and gazebos to sit and relax. 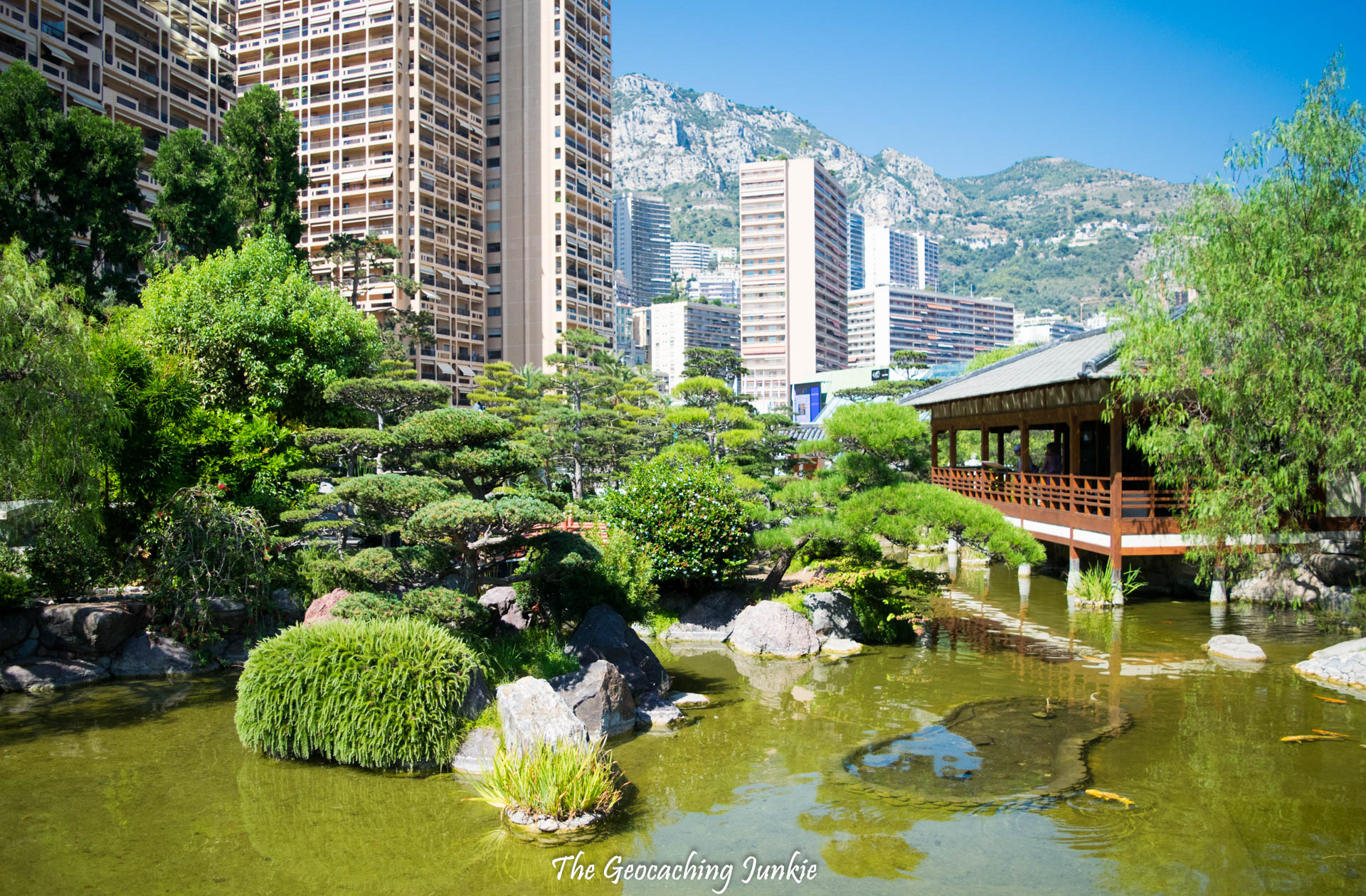 Forget the Hollywood Walk of Fame, Monaco has the Champions Promenade, where the path is adorned with the footprints of famous footballers. Situated around the Grimaldi Forum, the plaques include the footprints of footballing legends such as Pelé and Maradona. 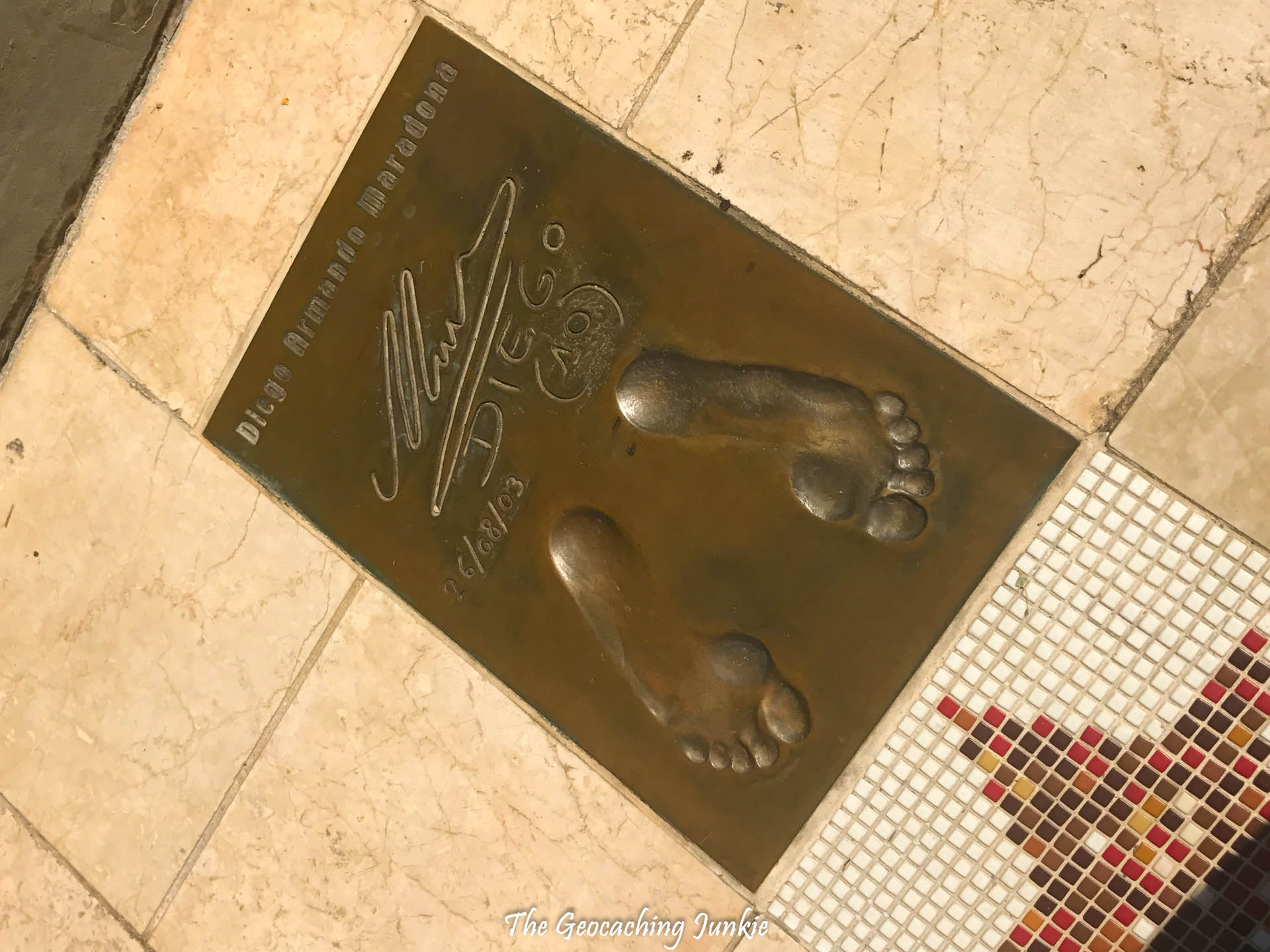 If you packed your swimsuit, flip flops, sun screen and beach towel, you’re all set to head for the beach! The Plage du Larvotto has the most beautiful, warm, clear and calm water, with fish swimming around your toes. It costs nothing to swim and sunbathe there, though if you want to opt for some luxury, you can rent sun beds at Miami Plage for €25 per person for the day. 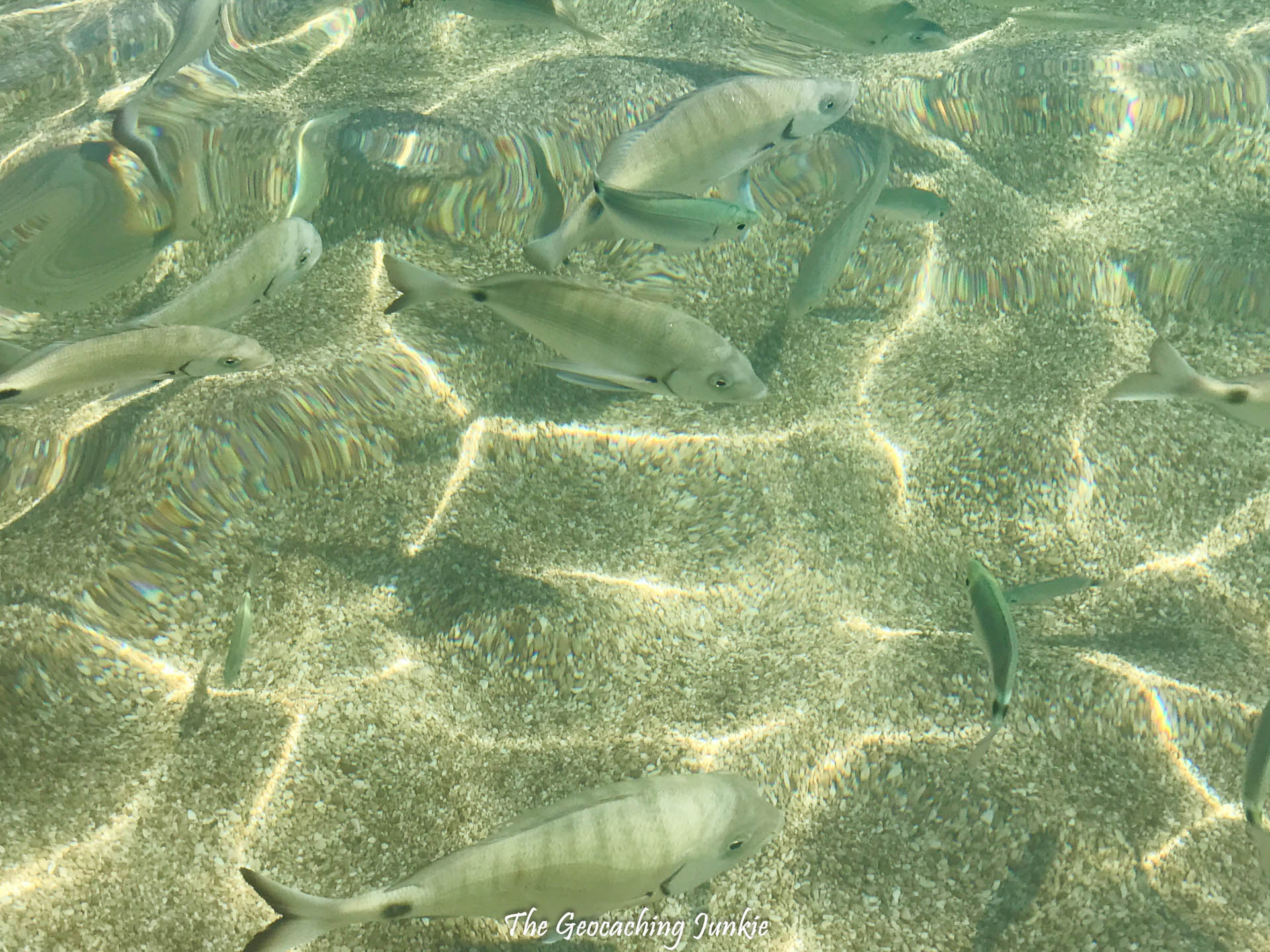 The cuisine in Monaco is heavily influenced by Italy and you’ll find countless pasta and pizza places, with prices ranging from €15 – 20 for a main course. There are lots of restaurants located around the streets leading to Port Hercule and most will have a menu on display so you can shop around. A glass of wine will cost you between €4.50 and €7.

Parking is at a premium in Monaco and the cheapest car parks are situated high above the main tourist areas so expect a walk. A day pass on the local buses will cost you €5.50 and children under 7 can ride the bus for free. Alternatively, you can buy a two day ticket for the hop on/hop off tour bus for €25 per adult (a one day ticket costs €22 so it’s worth going for two days if you’re there). We stayed on the bus for one circuit of the 12 stops around the principality and listened to the audio before deciding where to hop on and off.

Since Monaco is essentially built in to cliffs, it is quite hilly to walk around so be prepared to work up a sweat in the summer! 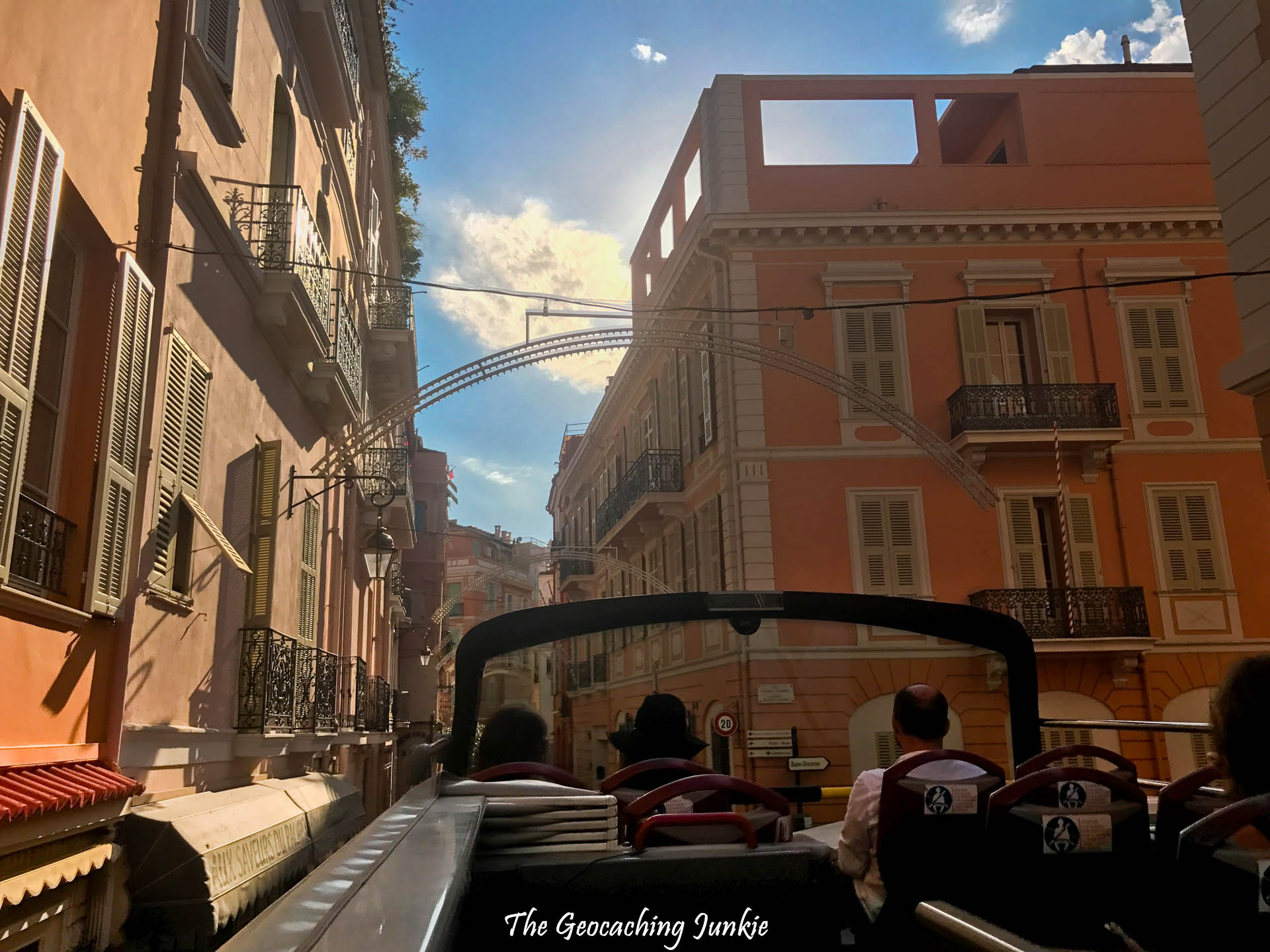 We really enjoyed our time in Monaco and were pleasantly surprised to find we could experience so much of the tiny country without breaking the bank. Where is the most expensive place you have visited? Let me know in the comments 🙂

2 thoughts on “Monaco: Not Just for the Rich and Famous | The Geocaching Junkie”