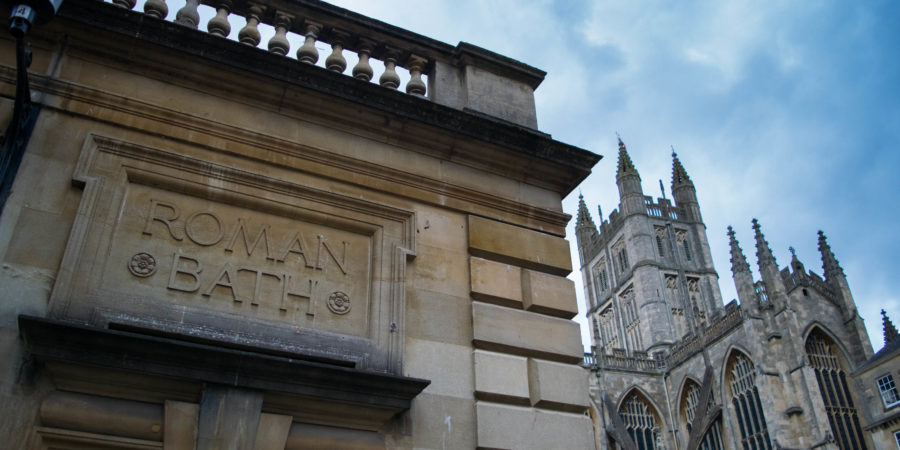 Bath is a city that has long been on my must-visit list, and I was delighted to find myself in the area on my recent flying visit to Devon for the UK Mega. Although it was a short weekend, I decided to make the most of our proximity to Bath and make a stopover in the Roman city for an afternoon. 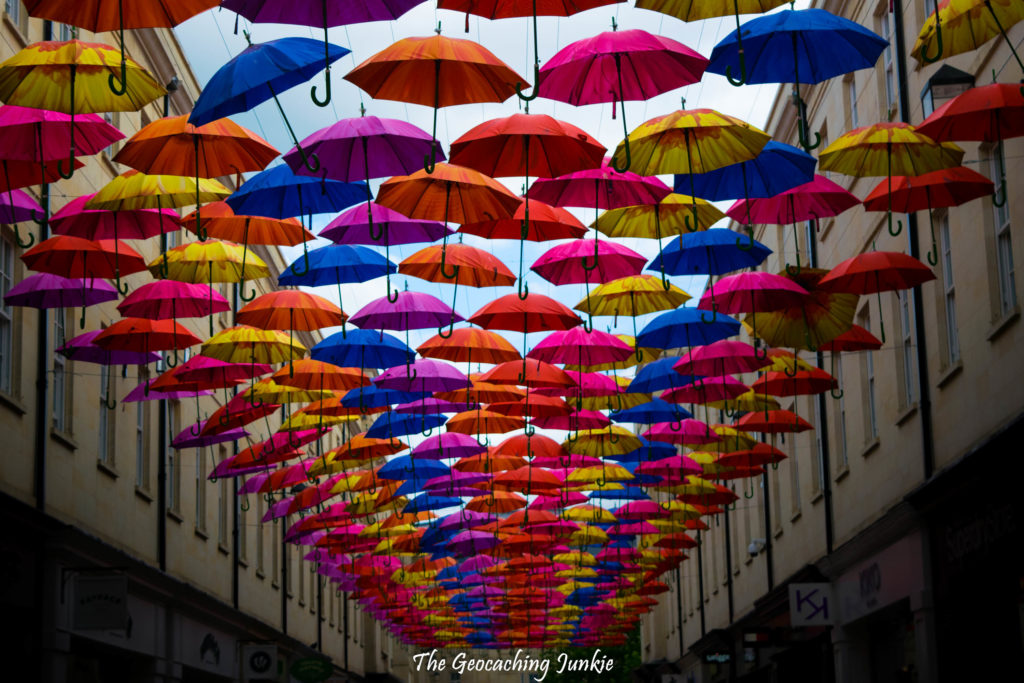 On our way to the famous Roman baths, we passed by SouthGate shopping centre and the aptly named Umbrella Street. The amazing installation of over a thousand umbrellas was inspired by the Ágitagueda urban art and music festival that takes place annually in Portugal. If there is such thing as an Instagramable street, this one definitely fits the bill! The colourful umbrellas are a photographer’s dream and I spent a good 15 minutes snapping away.

If you think of Bath, you can’t help but think of the Roman baths. It is, after all, where the city gets its descriptive name. However, the Romans who built the temple in ca. AD 60 called the small town Aquæ Sulis, literally meaning ‘the water of Sulis’, the deity who was worshipped by the Romans at the thermal spring in Bath. The baths were slowly built around the original temple over the 300 years that followed.

The Roman baths are, unsurprisingly, a very popular attraction so some queuing outside can be expected during the summer months. If you have time to spare, you might consider visiting later in the evening from mid-June to the end of August, as the baths remain open until 10pm, with last entry at 9pm. We did not have time on our side and since it was number one on my to-do list, we went straight there and joined the queue. After a short time, we paid the £15.50 (adult) and £13.75 (senior), picked up our audio guides and made our way through the crowded exhibitions. 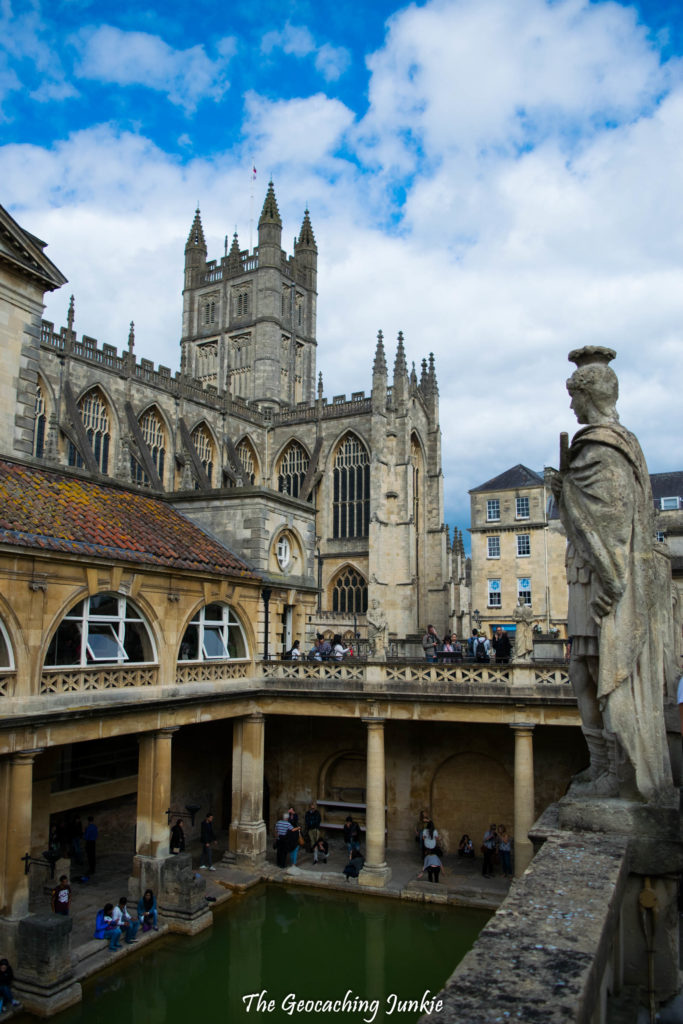 The site is amazingly well-preserved and, in addition to the building itself, there is a varied collection of Roman artefacts on display in the many rooms, including the gilt bronze head of Sulis Minerva shown above and the Temple Pediment (below), an exquisite piece of sculpture discovered in 1790 and in remarkable condition. 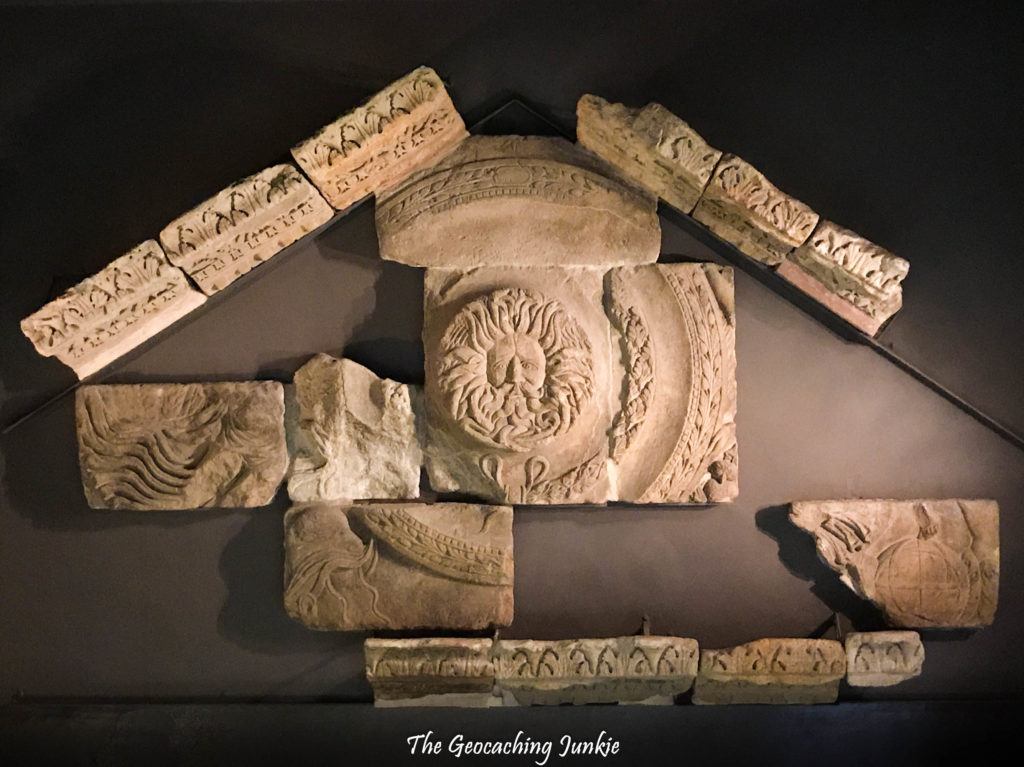 At the lower level of the baths, there are various rooms to peruse including a caldarium (hot bath), frigidarium (cold bath) and a swimming pool. The Great Bath was the most impressive part of the tour, with a view from above as you enter and then a walk around its perimeter near the end of the tour. 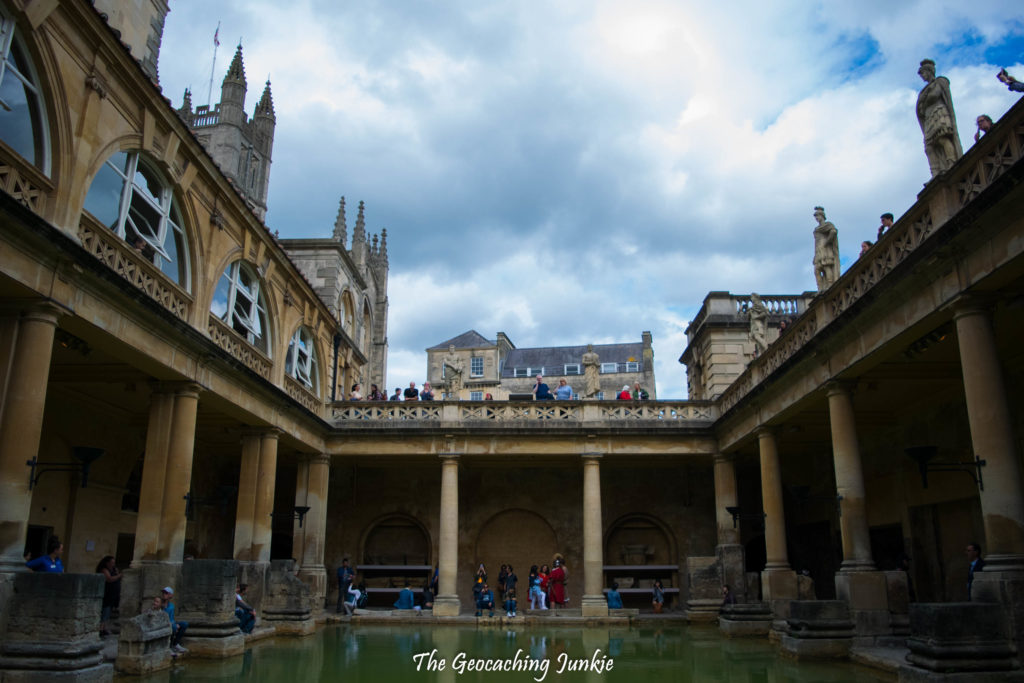 There are various costumed characters who appear around the Great Bath at various times of the day, and of course, I had to get the obligatory photo of the mother with a Roman soldier and a slave. The actors stay ‘in character’ the entire time they speak to you, which I felt made the experience a tad surreal! 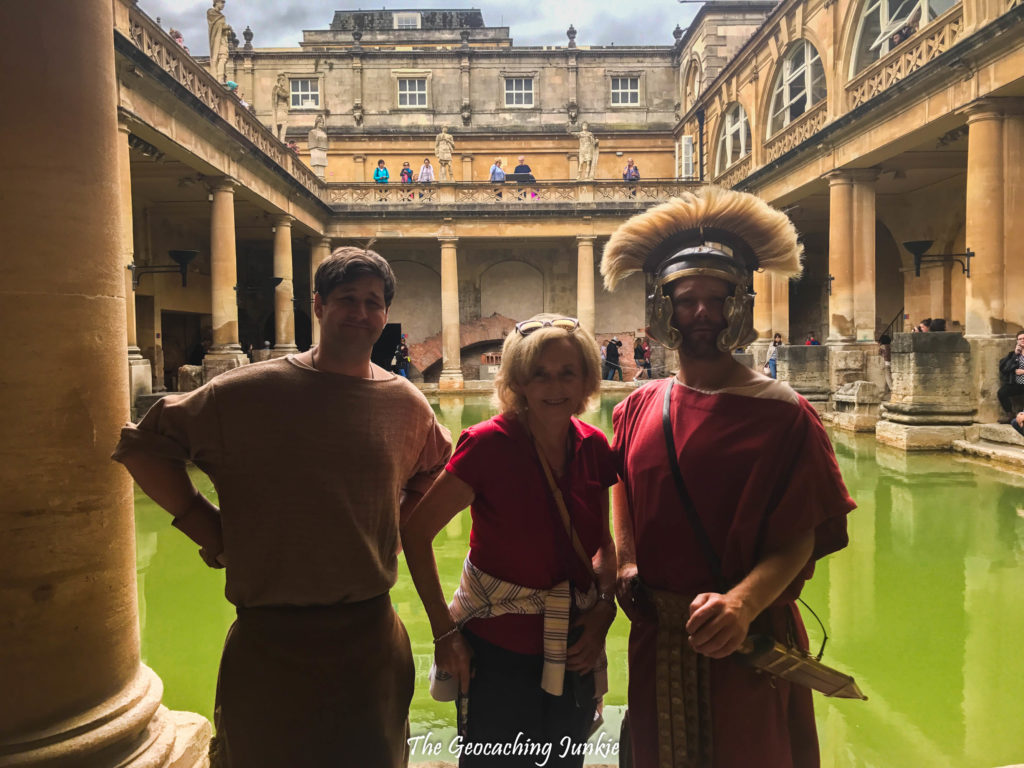 Our visit to the Roman baths did not disappoint and I would definitely go again, perhaps off season so it’s a little quieter. In saying that, a walk around the Great Bath may not be quite as pleasant when it’s raining!

The Abbey Church of Saint Peter and Saint Paul, situated just a few metres from the public entrance to the baths, is a Grade I listed building and was once a Benedictine monastery, originally founded in the 7th century. 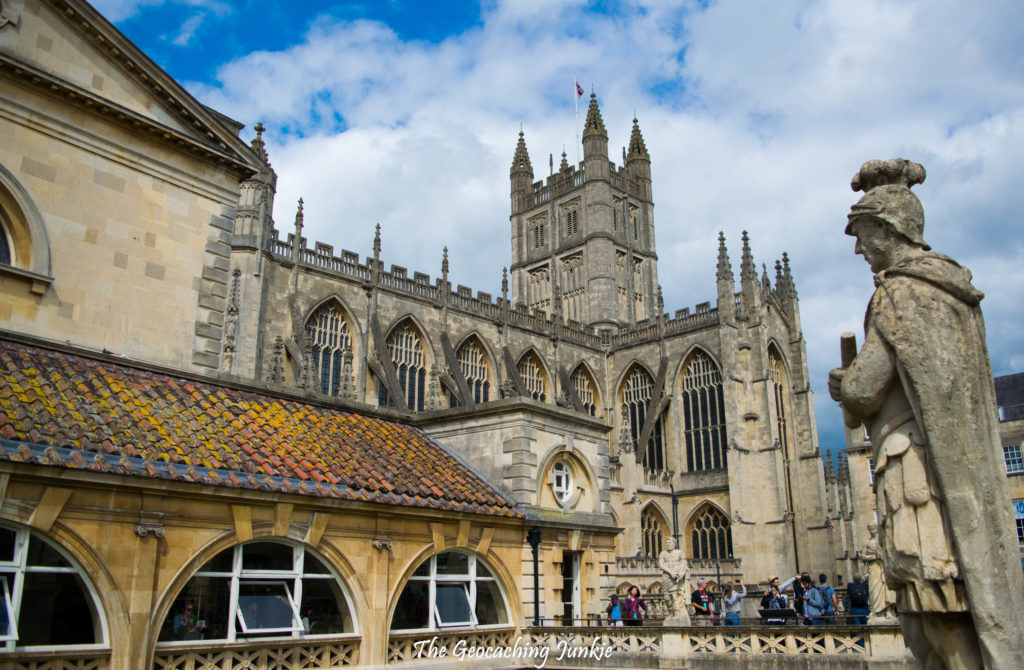 The building is open to the public for much of each day (outside service times), and while there is no entrance fee, there are suggested donations (£4 for an adult) which help, at least in part, towards the maintenance of the impressive building. The west front is particularly notable for its sculpted angels climbing stone ladders to heaven. 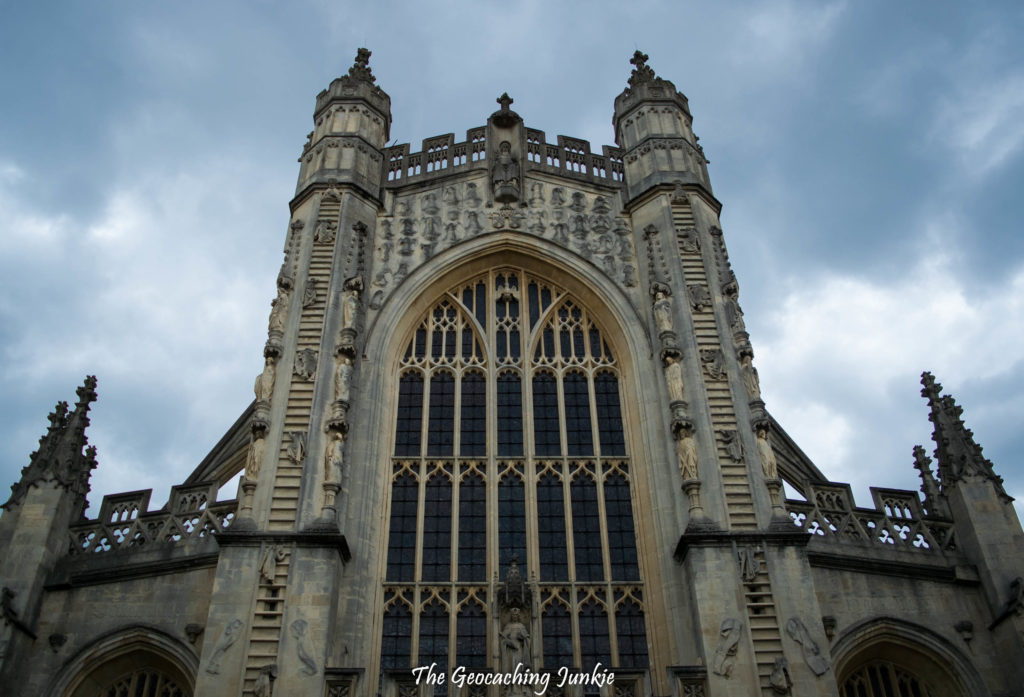 Whenever I visit somewhere new, I like to try some local speciality if I can, and when I researched Bath, I discovered the Sally Lunn bun. The website for Sally Lunn’s Historic Eating House displays the tagline: The Bun that isn’t a Bun. Puzzled? I certainly was. The main takeaway from my reading on the subject was that, firstly, the Sally Lunn bun should not be confused with the London Bath bun, and secondly, it’s part bun, part bread, part cake… In short, I had no idea what to expect but that just made me more determined to try one!

The mother and I headed to Sally Lunn’s house and museum, one of the oldest houses in Bath, having been built around 1482. The restaurant has a homely feel to it, with fireplaces and wood everywhere. We opted for the Sally Lunn 2 course High Tea, so we could try the buns in both savoury and sweet form. 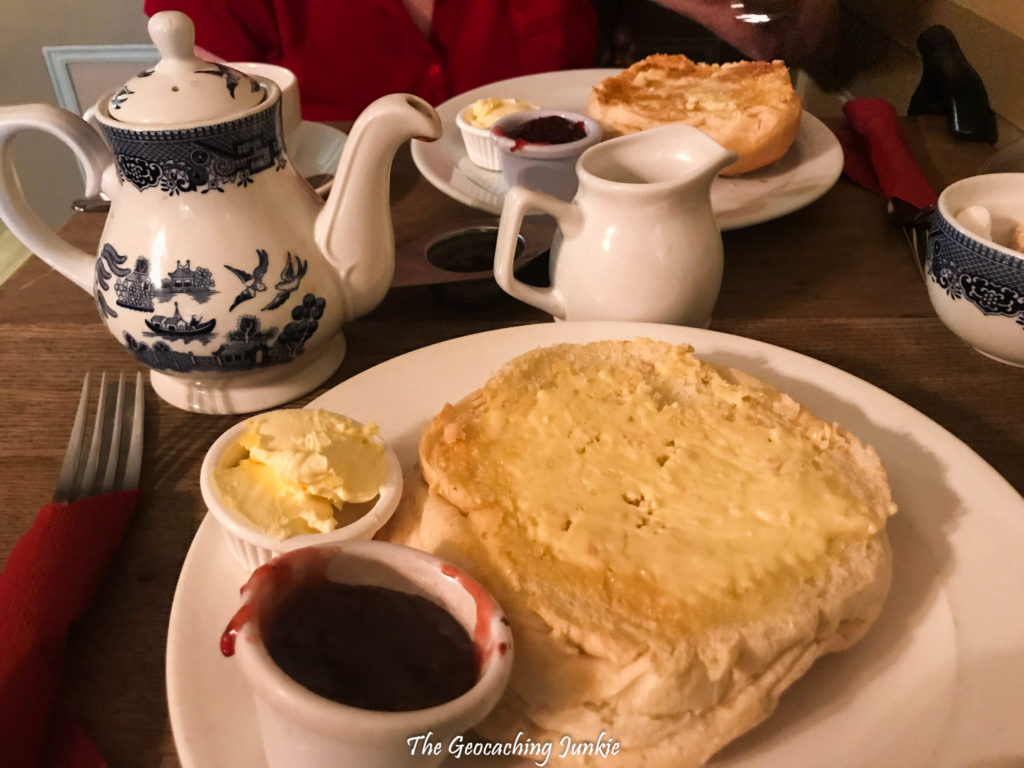 The buns are lightly toasted, which is when the flavour is said to really “come alive.” The first course was served with Scottish smoked salmon and the second with strawberry jam and clotted cream – both were delicious. Having tried the buns in both forms, I am no closer to describing them, but I can confirm that they are light, fluffy and really tasty.

We had just one short afternoon to spend in Bath and there is lots more to explore. The city has strong connections with Jane Austen, as she made it her home from 1801 until the time of her father’s death in 1806. The Jane Austen Centre tells the story of her time in Bath, where guides don period costumes in the Georgian Townhouse and that will be top of my list next time I visit.