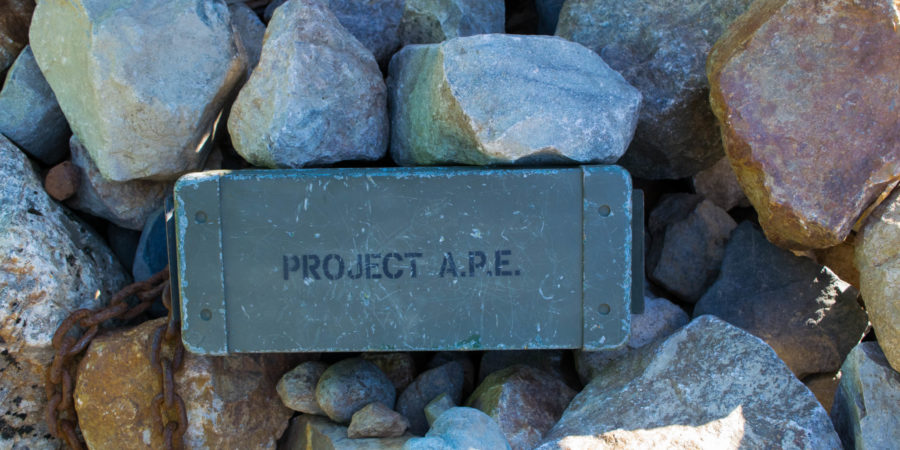 We booked our flights to Seattle on 17th February this year, 3 days before Geocaching HQ offered geocachers the chance to vote on the fate of the Project A.P.E. cache (GC1169), rediscovered near the Snoqualmie Tunnel in Washington in October 2016. Of course, I voted to have it unarchived and placed back in its original location and on 10th March, I was delighted to read that over 6,000 geocachers had voted the same way, and the cache would be returned to its original spot in August! 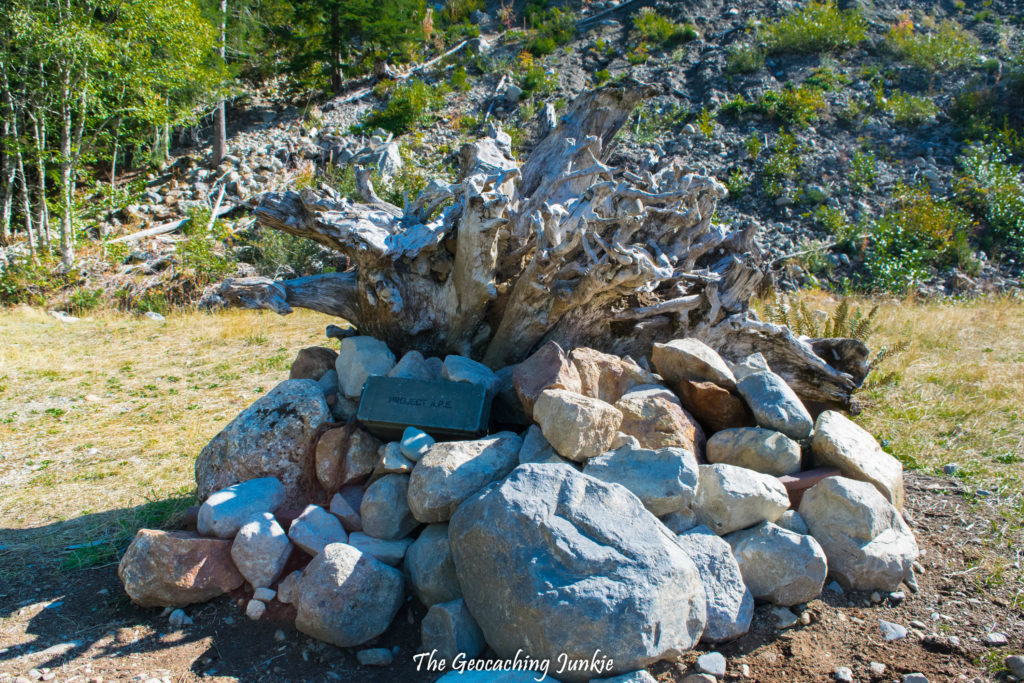 This was indeed a serendipitous turn of events: logging a rare A.P.E. cache was not really on my radar because I would have had to make a trip to Brazil to find one. Not completely impossible, but somewhat unlikely in the next couple of years at least. Mission 4: Southern Bowl (GCC67) was, until this year, the last remaining cache of a series of fourteen, which were placed to coincide with the release of the 2001 movie, Planet of the Apes.

The caches were released as part of a promotion for the movie. 20th Century Fox created a type of sub-plot unrelated to the actual story line, whereby, 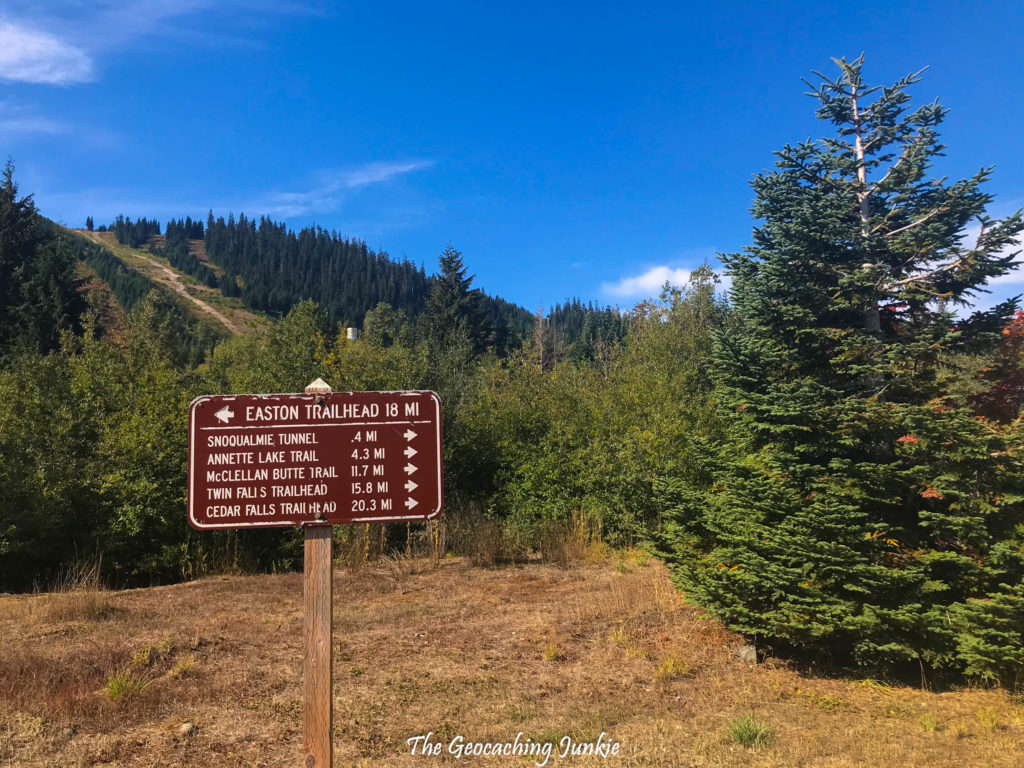 Hints relating to the location of the fourteen caches were slowly released, until finally coordinates were provided. All but five of the caches were placed in the United States, with the remainder hidden in Australia, Japan, the United Kingdom and, of course, Brazil. The first to find would have the chance to find a minor movie prop in the special container. The majority of the caches did not last very long, with just a few finds each. You can find my bookmark list of all the Project A.P.E. caches here.

In October 2016, a group of 10 Seattle-based geocachers headed out to Hyak, 60 miles east of the city, to look for the original Project A.P.E. container. They deduced that whoever muggled the cache would likely not have bothered carrying it all the way through the Snoqualmie Tunnel to the nearest parking, and may have simply thrown it somewhere nearby.

Remarkably, the team were successful and found the original container in the woods below GZ. Whoever muggled the cache literally tossed it over the edge and nature did a pretty good job of covering it up. As I mentioned above, many of the A.P.E. caches were archived quite quickly after being placed. The rule was once the original, unique container went missing, the cache could no longer be considered a Project A.P.E. (most were archived, although Mission 3: Graham’s Link was converted to a traditional cache). So, when Mission 9 went missing in 2011, the cache was sadly archived.

We’re Going on an Adventure!

We had already booked our flights to Seattle, so I sat the muggle down and explained the importance of this geocache. He understood it was a big deal – well, he understood that I believed it to be a big deal – so he agreed to taking almost an entire day out of our honeymoon to walk 2.3 miles (each way!) through a pitch dark tunnel – that’s about an hour and 40 minutes total in almost complete darkness. 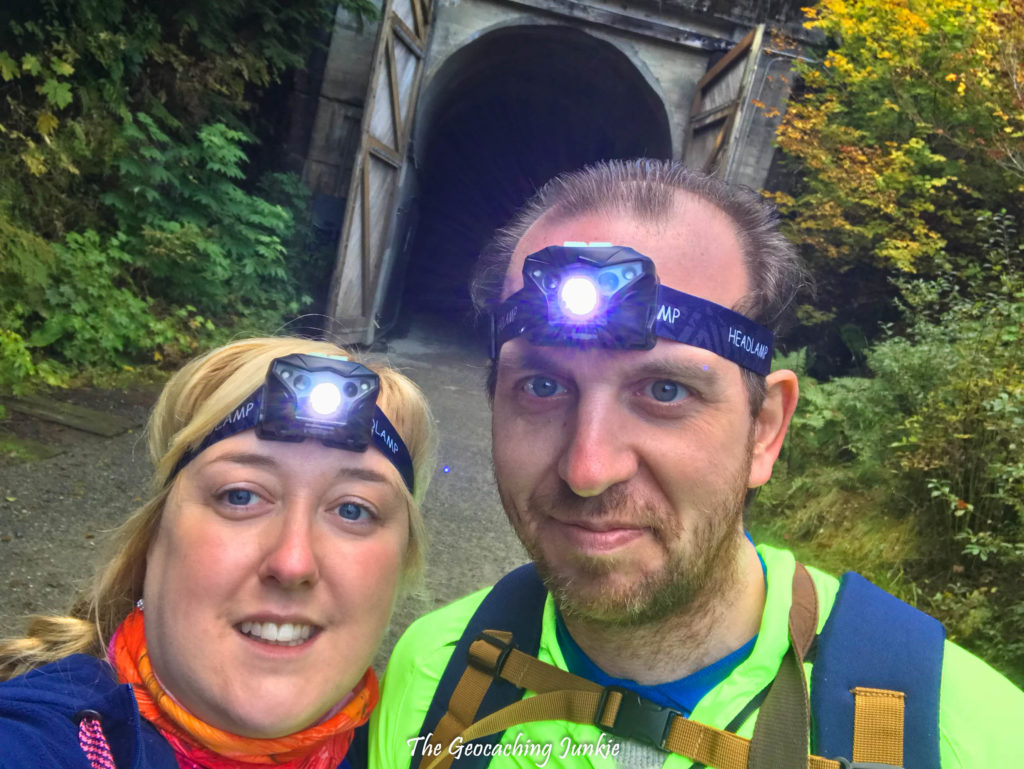 The Snoqualmie Tunnel was built between 1912 and 1914 by the Chicago, Milwaukee, St. Paul and Pacific Railroad as part of their Chicago to Seattle route. In 1980, it ceased to be used as part of the railroad connecting the two cities, and was later acquired by the State of Washington to use as a right-of-way. The tunnel now forms part of the Iron Horse State Park rails-to-trails project. 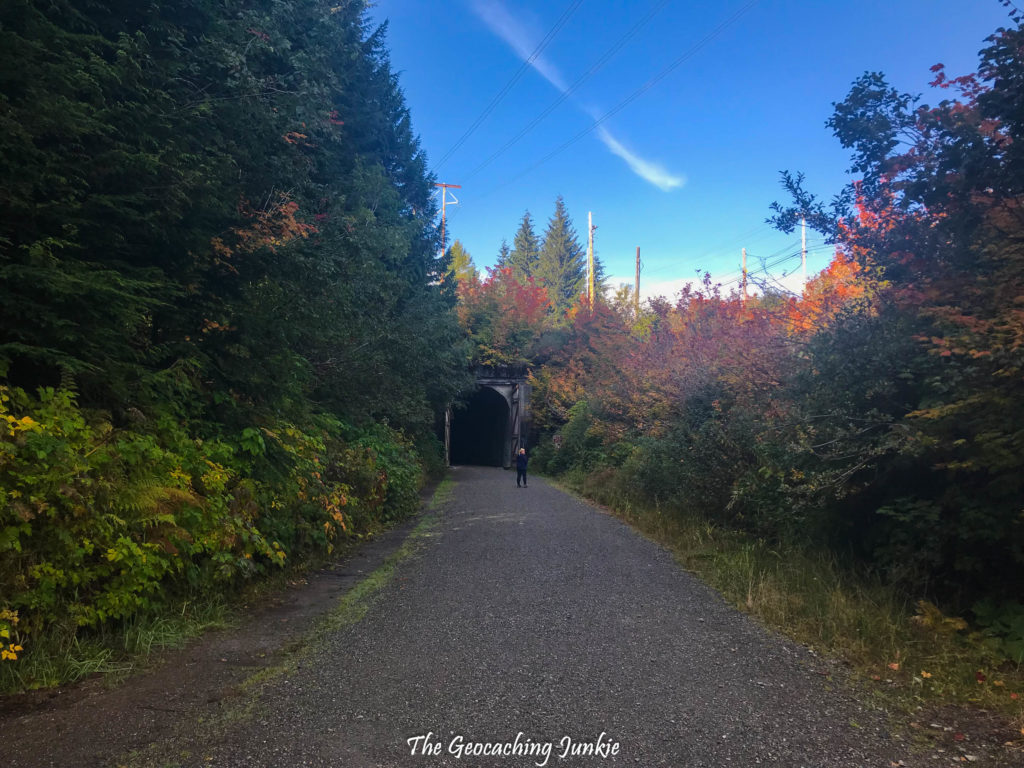 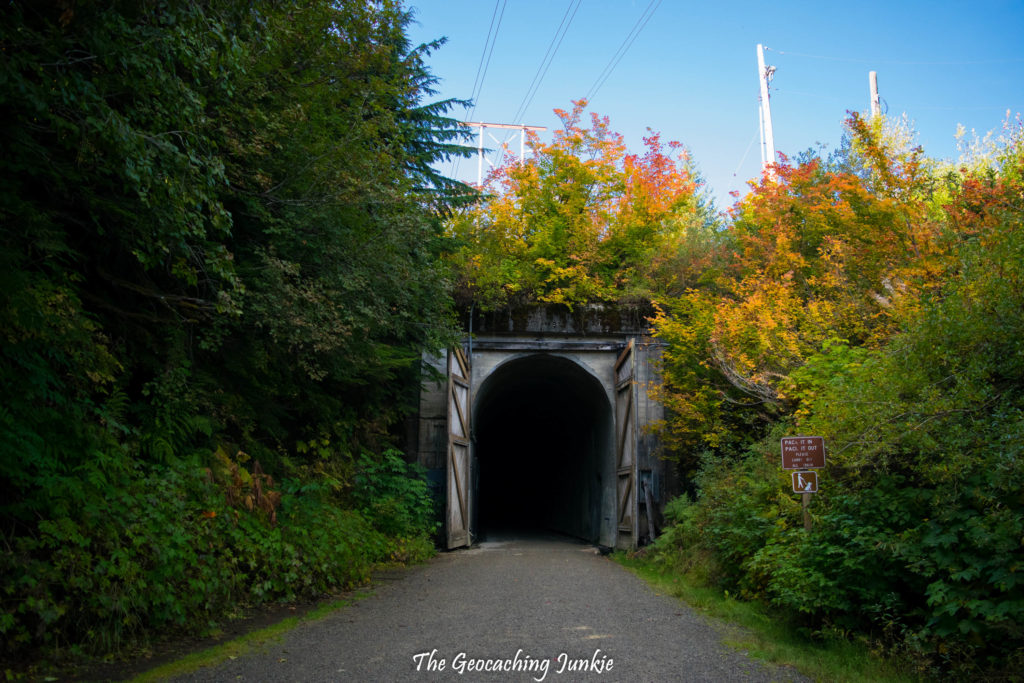 The parking to access the tunnel, and the easiest route to the A.P.E. cache, is at the Hyak trailhead. There is an alternative route with access from the Annette Lake trailhead, which is actually shorter, but a tougher hike with 175 metres of elevation gain. The tunnel is closed from November to May, as large and potentially dangerous icicles can form inside due to seep water.

We drove the hour from downtown Seattle to the Hyak trailhead and after kitting up with head torches and jackets (the tunnel is both cold and pitch black), we were soon on our way to the entrance of the tunnel. I will admit to letting out a squeal of delight when I saw the huge doors: we were actually here and on the verge of finding an A.P.E. cache! 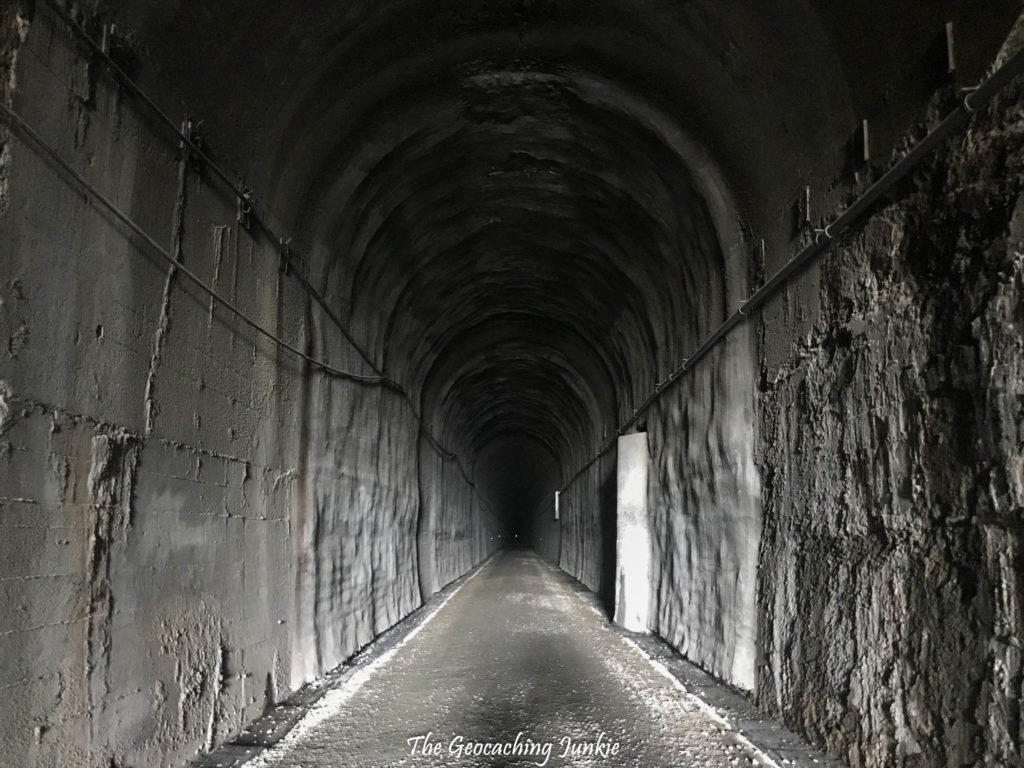 We worked on the EarthCache, Iron Horse Speleothems (GC3TT7R), inside the tunnel and also found the traditional cache, Bloody Fingers, Dirty Diapers… (GCJMDK). Before we knew it, the light at the end of the tunnel was growing in size and we were soon at the other side and back in to the sunlight. 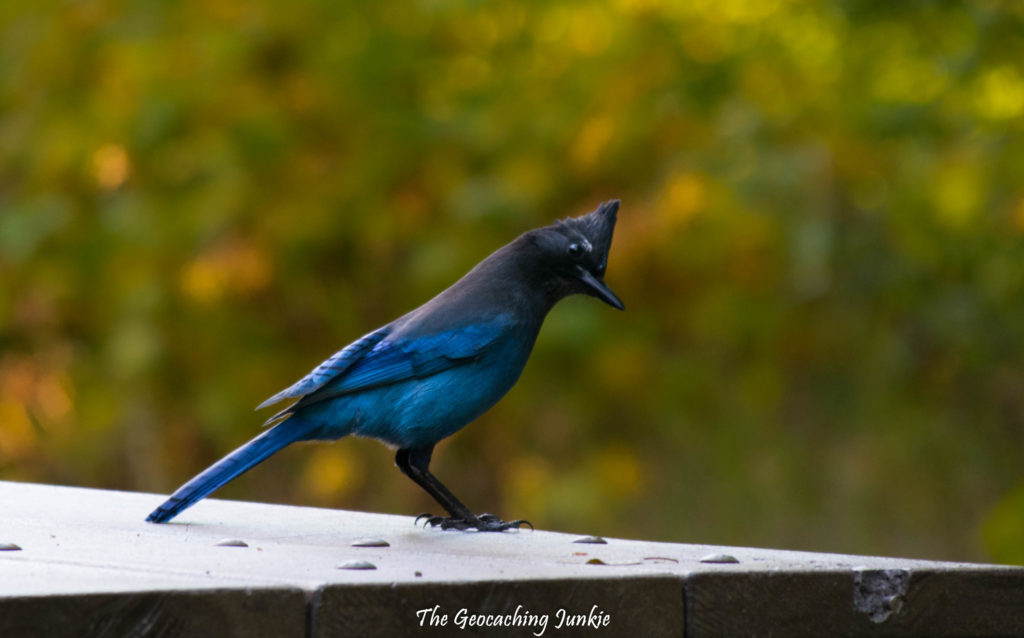 We stopped to enjoy our packed lunch at a picnic table situated just outside the tunnel and were joined by a beautiful Steller’s Jay. One of the reasons I love getting out of the city when we travel is to discover wildlife that we can’t see at home. 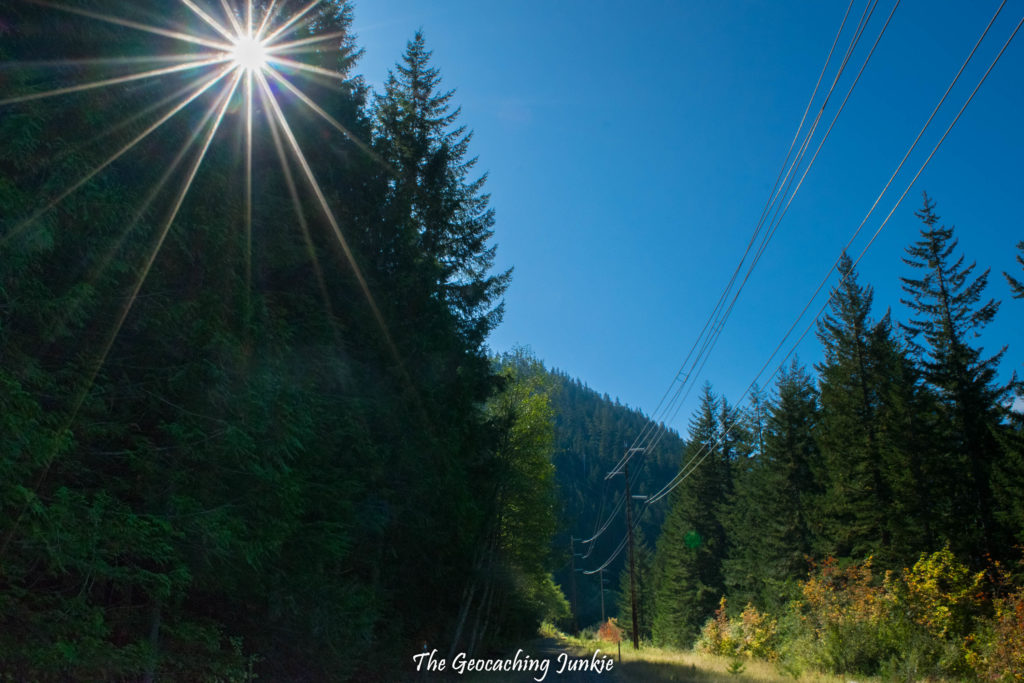 On our way again, we stopped for another traditional, KE Boy Scout Troop 570 Iron Horse Cache (GC1HQBR). The rest of the path to the A.P.E. cache is easy-going and the cache itself is hidden right beside the trail. Finally, we arrived at the tree stump and pile of rocks that is home to the special cache. It was a moment to be relished, not rushed – and heavily photographed, of course. 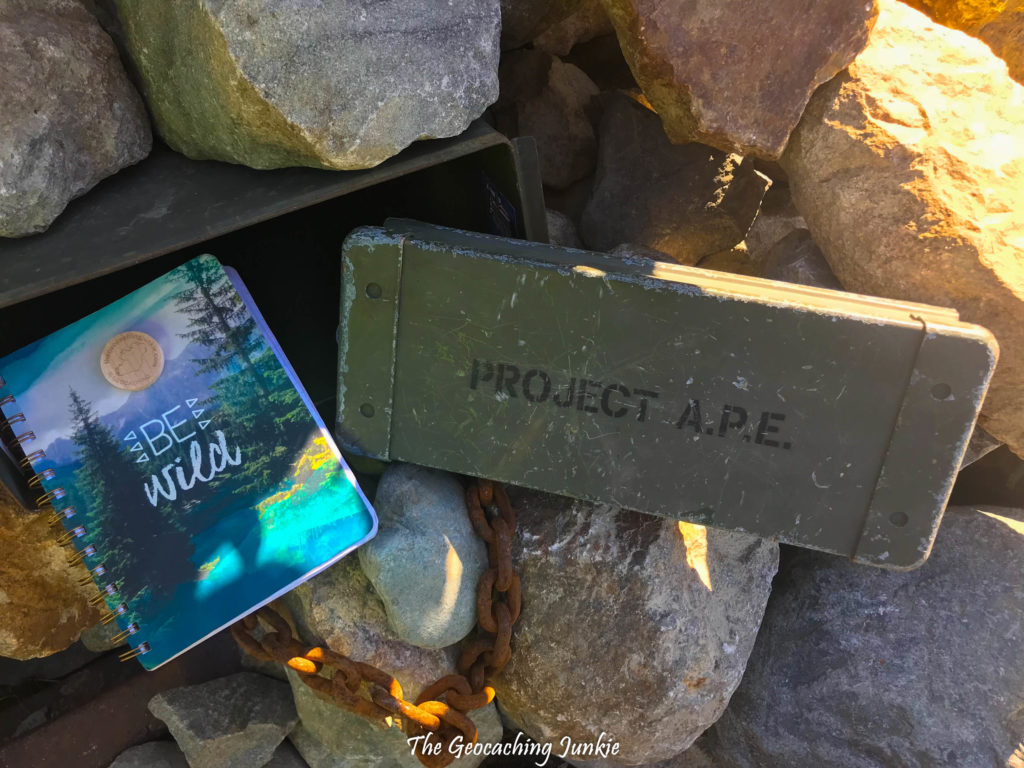 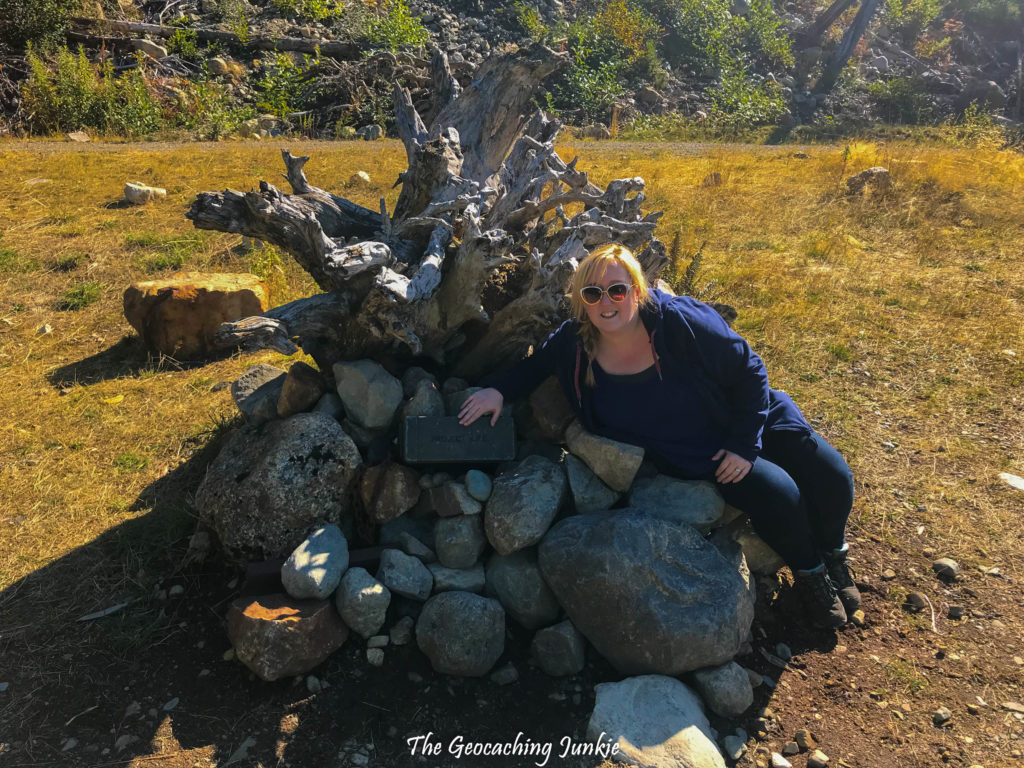 It was so exciting to find such an amazing piece of geocaching history and the adventure of walking through the tunnel made it even better. On the way back, we went off trail to find Iron Horse (GC79), placed by Jeremy Irish in October 2000, and enjoyed the great views of autumnal colours set against the blue sky. 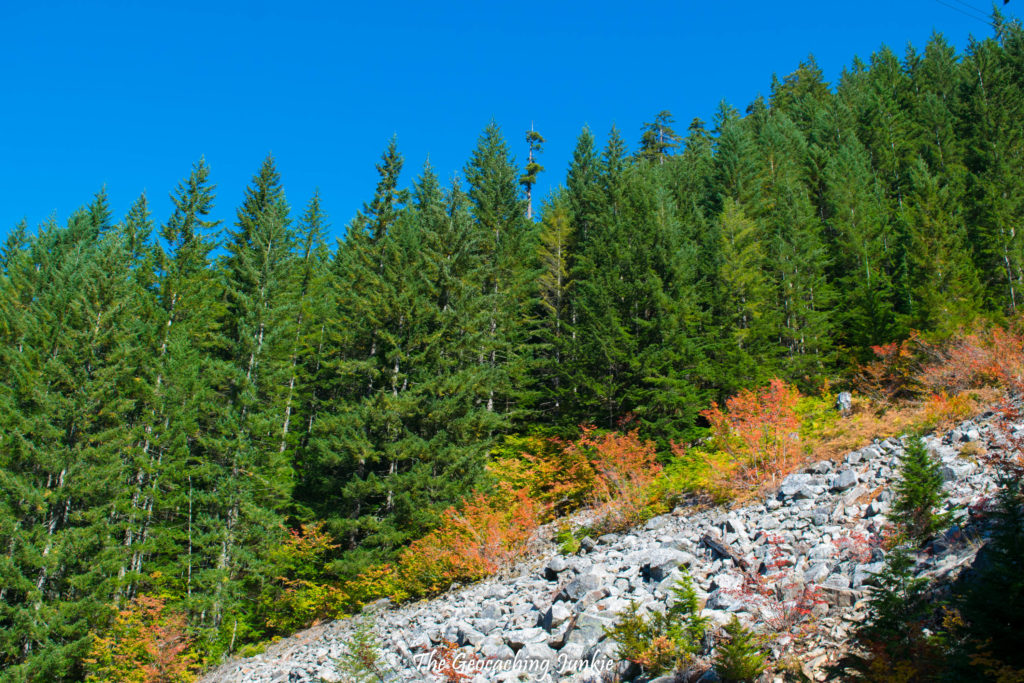 I have to admit, the walk back to the car seemed much longer, as the anticipation of the find meant the adrenaline was rushing on our way to the cache. Overall, it was a great experience and well worth taking the time out of our schedule to pull on our hiking boots and enjoy the Washington wilderness. 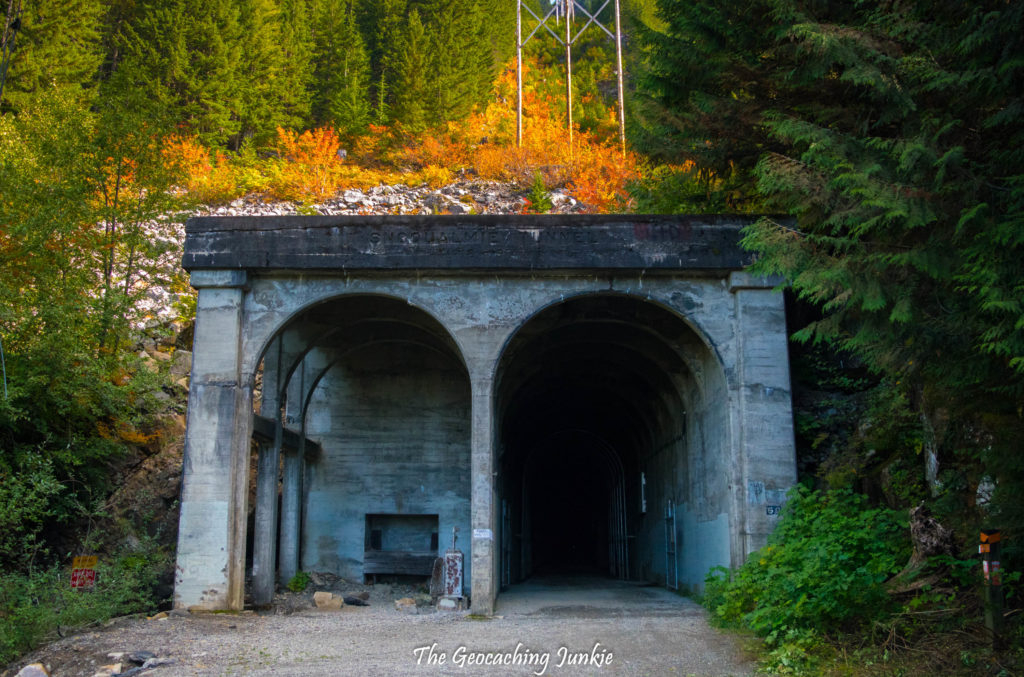 Adding GC1169 to my finds meant that I completed the ‘GeoTriad‘ (also known as the Geocaching Trifecta), whereby you have to find the Original Stash Tribute Plaque in Oregon, Geocaching HQ in Seattle and, of course, the A.P.E. cache. It’s a challenge I wasn’t exactly working towards but it feels great to have completed it!

Have you found an A.P.E. cache or do you have plans to find one? Let me know in the comments!

5 thoughts on “Project A.P.E. Cache: The Light at the End of the Snoqualmie Tunnel | The Geocaching Junkie”