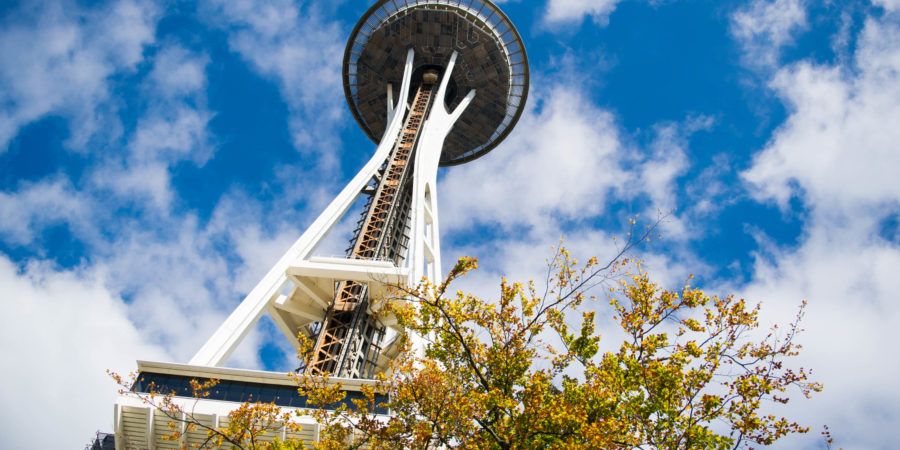 If you’re a geocacher visiting Seattle for the first time, chances are you’re going to Geocaching HQ, and if that wasn’t in your plans, it really should be if you can. I’ve been to HQ twice now and loved it on both occasions. You can read all about my first trip there in this post. The Emerald City has, however, much more going for it than just being the home of geocaching, and you should take some more time to explore if you can. I’ve put together a list of some of my favourite spots in Seattle, as well as the nearby geocaches, that I think you should consider when you’re visiting the city.

Coffee is a big deal in Seattle: people in the city consume more java than in any other American city. You will find somewhere to get a cup of joe on almost every block in the city. Seattle is home to the first ever Starbucks, which opened in 1971. The coffee giant now operates over 23,000 stores worldwide, so coming to where it all began is a must-do while you’re in town. 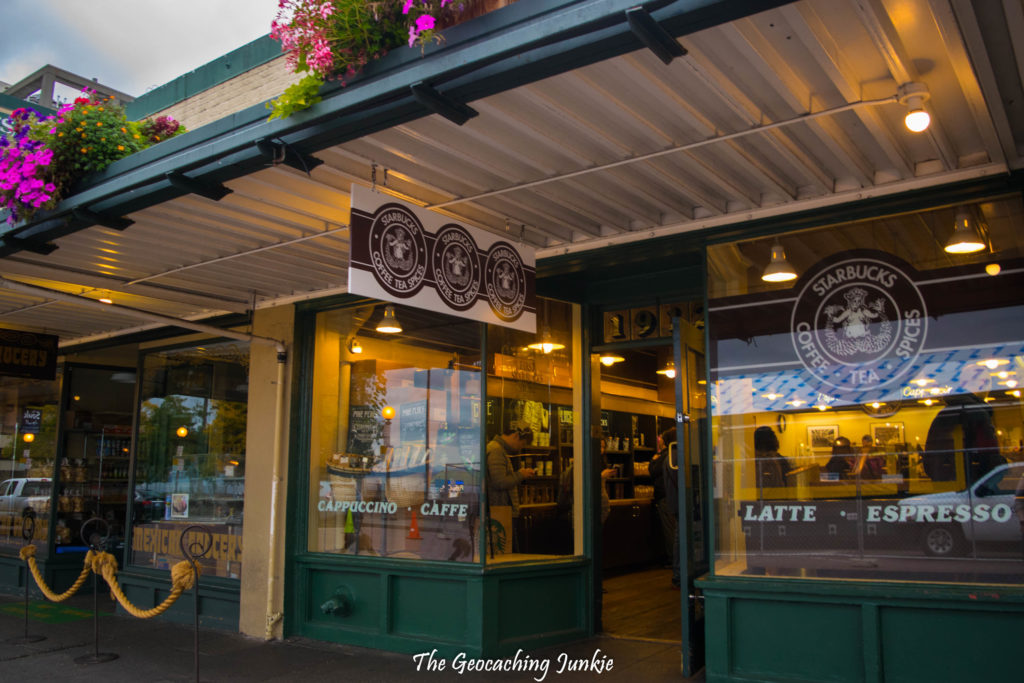 The store is now a popular tourist attraction so there is usually a line outside to get in. Thanks to jet lag, we visited just after opening at 6am and were lucky to walk straight in. 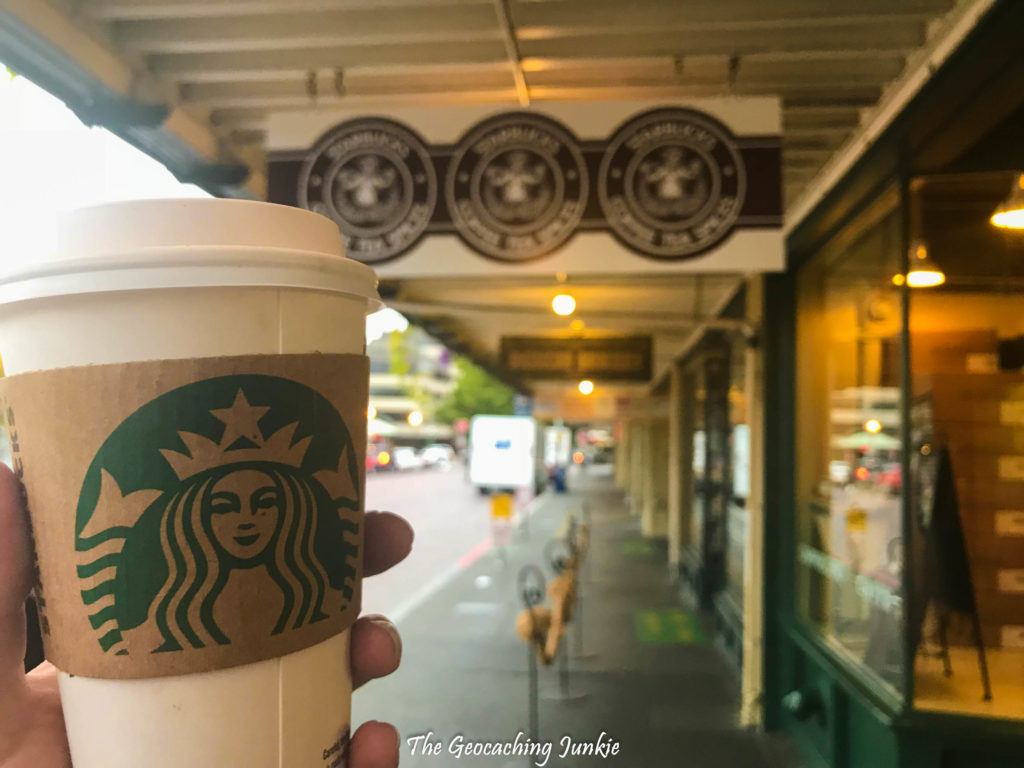 where it started, GC3A7RC – This is a very nice little multi-cache, within a few blocks of Pike Place, with a clever final hide.

The famous Pike Place Market is 110 years old and one of the most visited tourist attractions in the world. The street level of the market houses stalls with various wares for sale, including flowers, handmade crafts, fresh produce and fish. The lower, less busy levels are a treasure trove of unique stores, ranging from antique dealers to comic books. 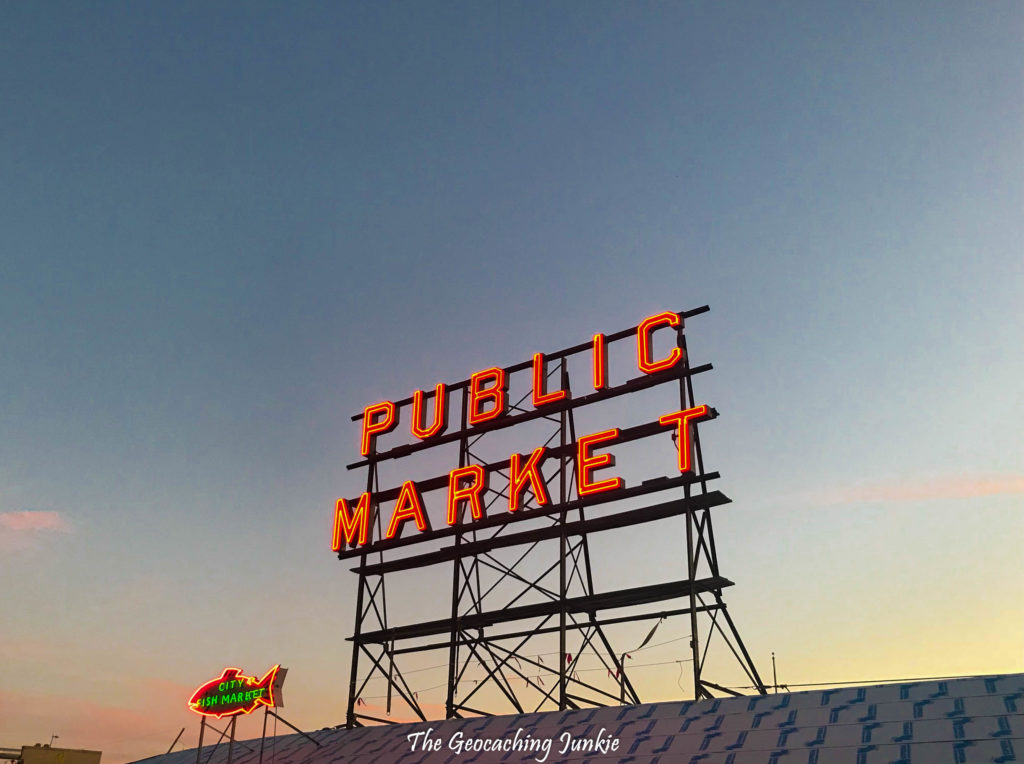 A stop at the Pike Place Fish Market is a must, where the fishmongers throw huge salmon to each other, rather than passing them. You might have to wait for a salmon to be ordered (or you can of course order one yourself if you have somewhere to cook it!), then one of the employees standing at the ice trays will pick up and toss the chosen fish to an employee in the back for preparing and wrapping. It’s quite a sight to behold. 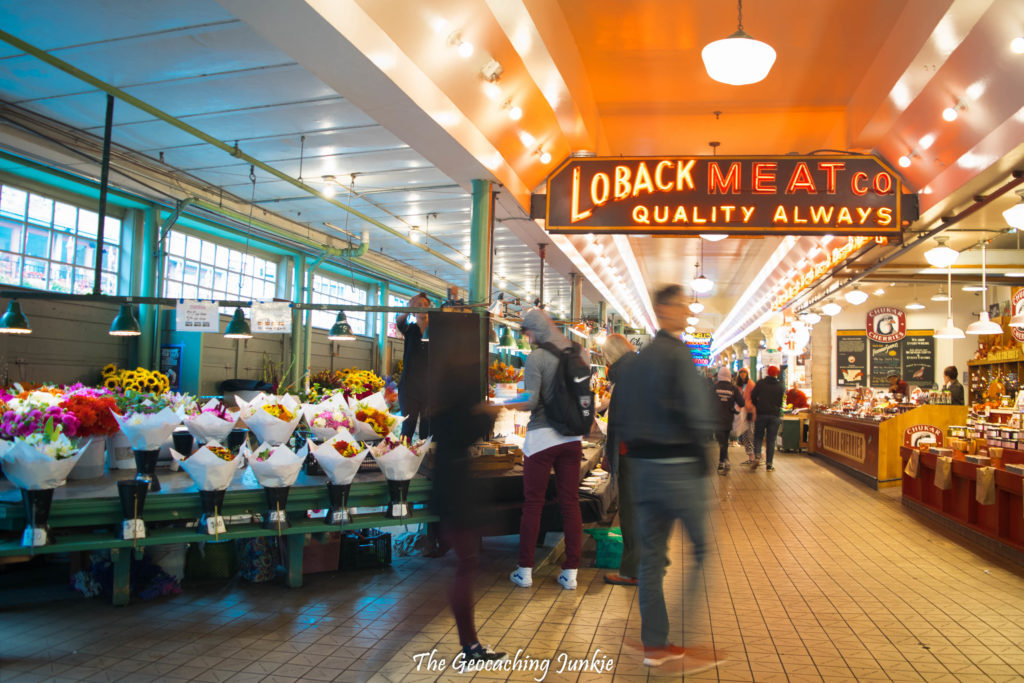 While you’re at Pike Place Market, it’s worth having a bite to eat, if only to take in the views over Puget Sound! We enjoyed breakfast at Lowell’s, where the portions were huge and the pancakes so good. 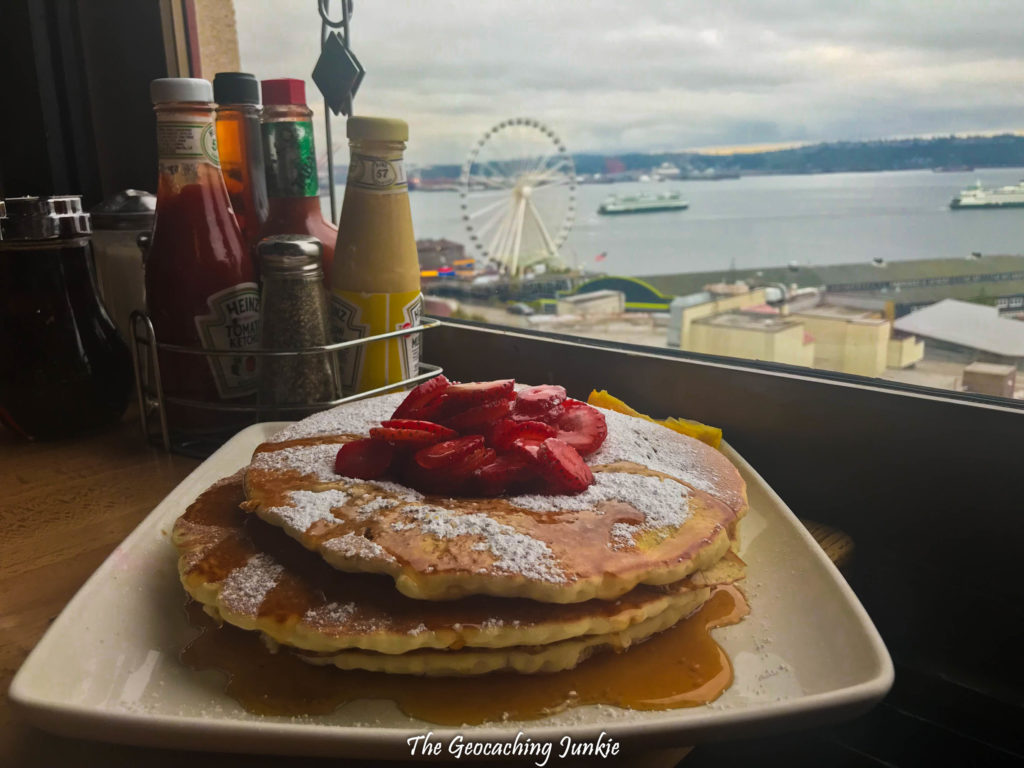 Alternatively, you can eat next door at the Athenian, where we enjoyed delicious seafood with a view of the Sound. The Athenian is the famous diner from Sleepless in Seattle, where Sam (Tom Hanks) and his friend Jay (Rob Reiner) discuss dating in the 90s.

One of the stranger tourist attractions I have ever visited, Seattle’s famous gum wall, can be found in Post Alley. The tradition of sticking gum to the bricks started in 1993 and while employees of the theatre tried cleaning it away, new gum would appear so they eventually gave up. 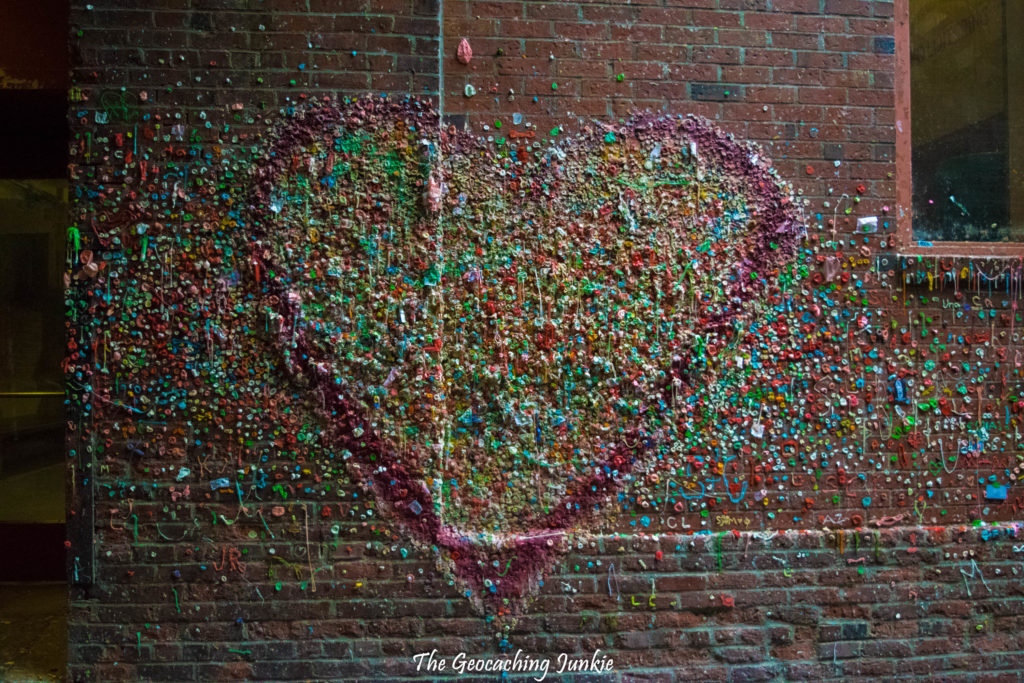 In November 2015, shortly after my first visit, the wall was deep cleaned for the first time in 20 years. As soon as cleaning was finished, the wall started to build up again but was recently cleaned once again, leaving only one small section with a heart outline visible when we visited in October 2017.

Double Bubble Toil & Trouble, GC24H25 – this traditional is the most favourited cache in downtown. I visited in 2015 and couldn’t find it but I had high hopes of finding it this time with the muggle’s help and some hints I’ve picked up from finders over the last two years. Alas, it was not to be as the wall had been cleaned mere days before our visit! It’s definitely worth a visit once it’s been replaced – give me a hint if you find it 🙂

For some great views of Seattle, you won’t want to miss a trip on the Great Wheel. Just a stone’s throw from Pike Place Market, the wheel was opened in 2012 and stands at 53 metres (175 feet) over Elliott Bay. 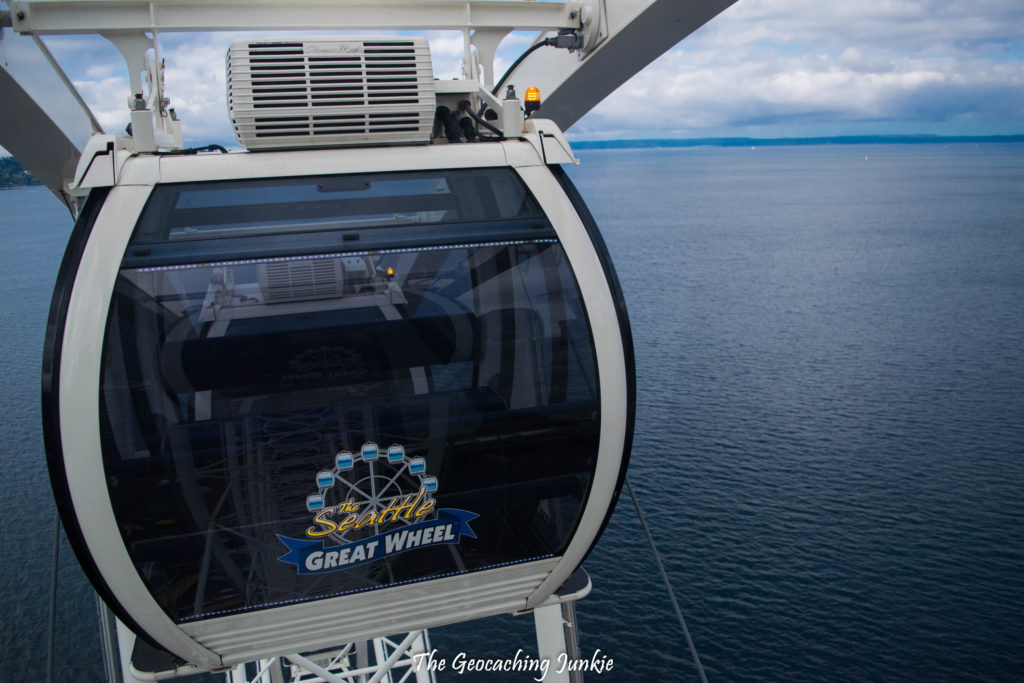 $14 per adult ticket will get you a few spins on the wheel, where if you stop thinking about high up you are, you can enjoy great views of downtown, all the way to the Space Needle and Mount Rainier, on a clear day.

Octopus’s Garden of Watery Delights, GC30EQY – a nice traditional hide situated between the Great Wheel and the nearby aquarium.

Sick of bringing home the same old souvenirs to your loved ones? Tired of buying the usual fridge magnets or t-shirts as a memento of your trip? Get yourself to the ultimate in alternative shopping: Ye Olde Curiosity Shop! 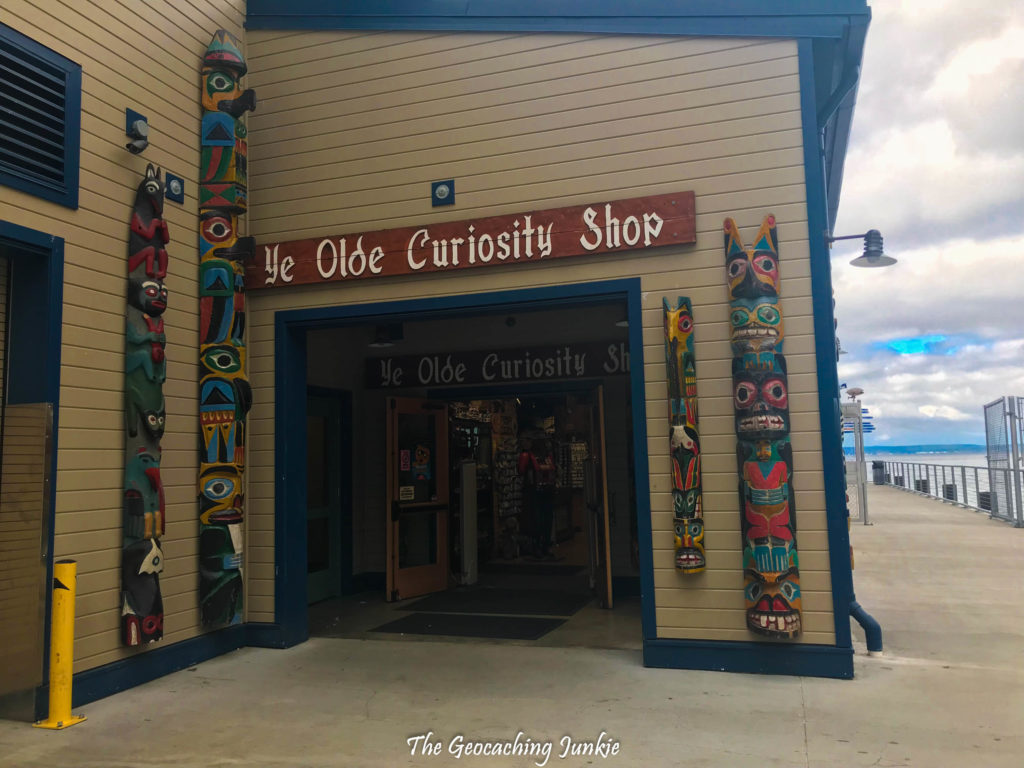 With all manner of weird and wonderful stuff for sale, including real fish skeletons, taxidermy gaffs and some beautiful Native American artworks. You’ll find the shop not far from the Great Wheel, on Pier 54.

It may seem a bit strange to visit a library while on vacation, but some libraries are definitely worth your time! The Seattle Central Library is a glass and steel work of art, taking up an entire block in downtown. 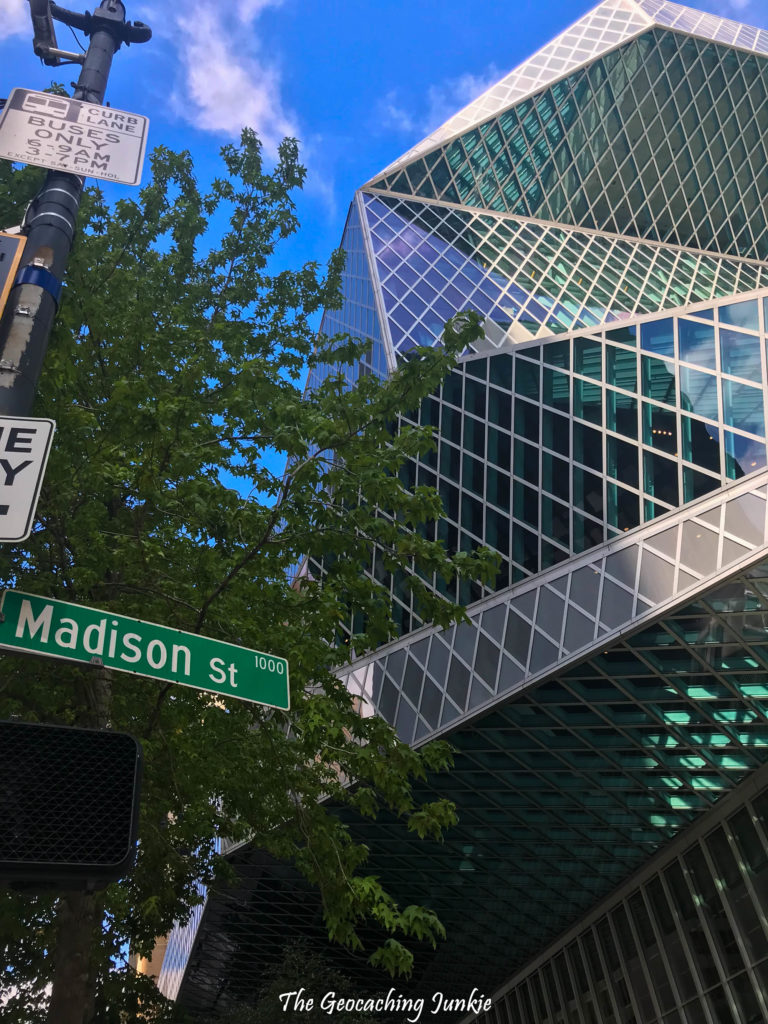 Construction of the impressive building was finished in 2004. It has 11 floors with a capacity for more than 1.5 million books. The tenth floor is home to the Betty Jane Narver Reading Room, which offers some great views over Elliott Bay.

Seattle Public Libraries: Central, GC49G2M – I have not yet met a library cache that I didn’t like but this multi is particularly good. Definitely worth your time while in Seattle!

Probably the most well-known structure in Seattle, the Space Needle was built for the 1962 World’s Fair. I first visited on my whirlwind tour in the Seattle area in October 2015 and on that occasion, having spent most of the day driving all over the place Jasmer cache hunting, I arrived at the famous observation tower just over an hour before it was due to close. There were some benefits to this: the crowds were much smaller, and the view of downtown all lit up was impressive. 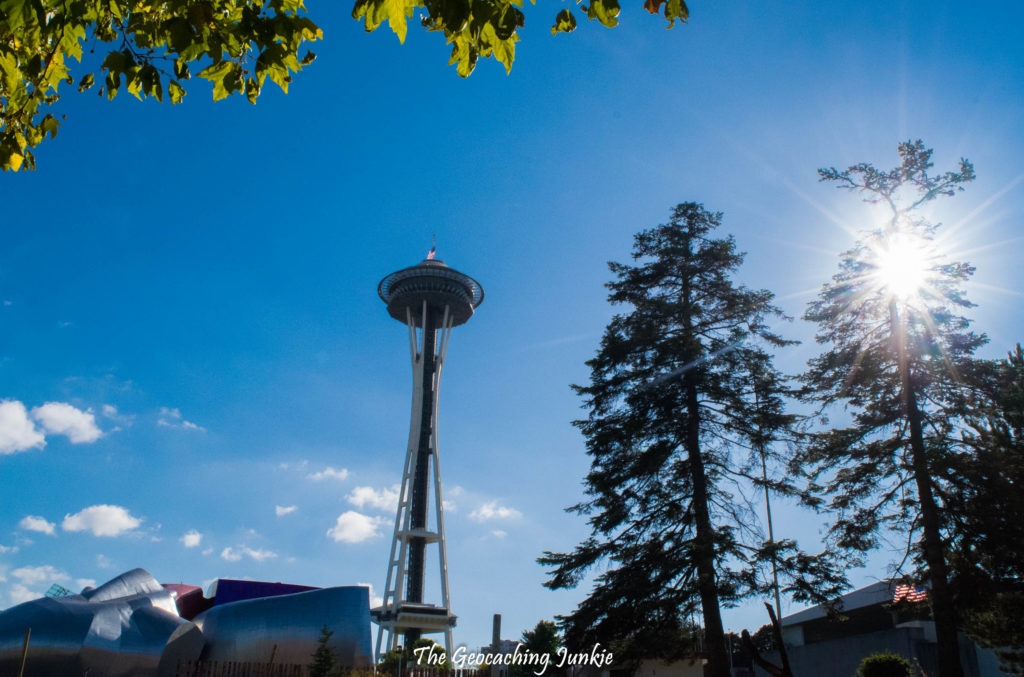 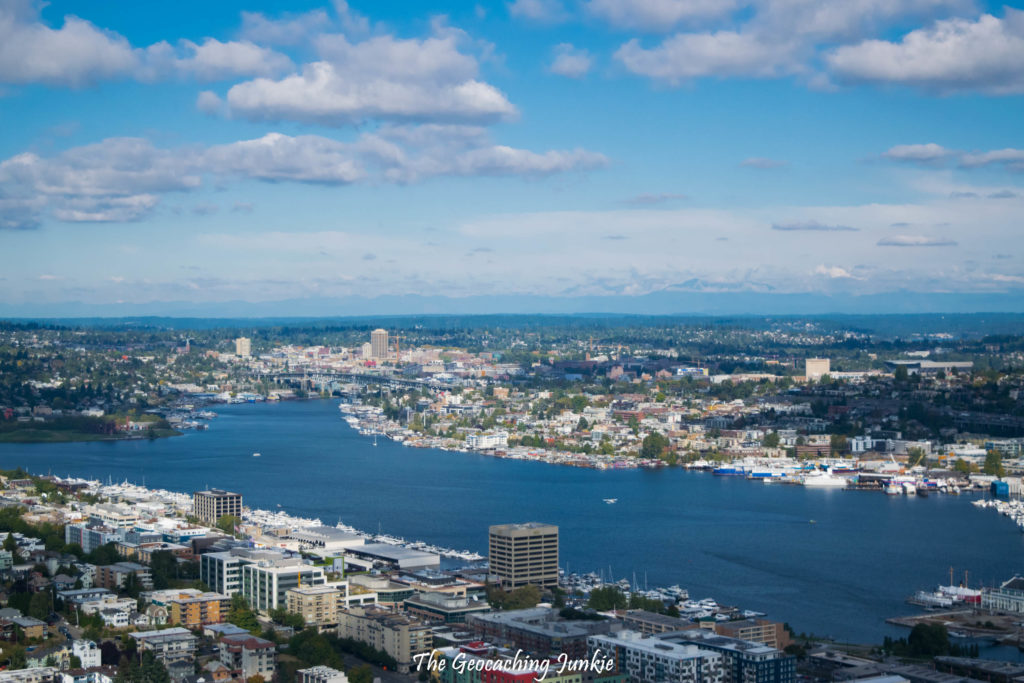 The Seattle Space Needle, GC7B6BG – this is a virtual reward geocache. The Space Needle is undoubtedly worthy of a virtual cache so it’s great to see this one here.

Dinosaur Train Corythosaurus Cache – KCTS 9, GC28FGB – a very nice traditional hide, worth a visit while you’re nearby; a great place to drop trackables too!

For arguably the best view of the city, a stop at Kerry Park in the Queen Anne neighbourhood is a must. On-street parking is available nearby and after a short stroll over to the wall, you will join the tourists looking for the best selfie possible. The vista is beautiful in both daylight and when the lights are twinkling by night in downtown. 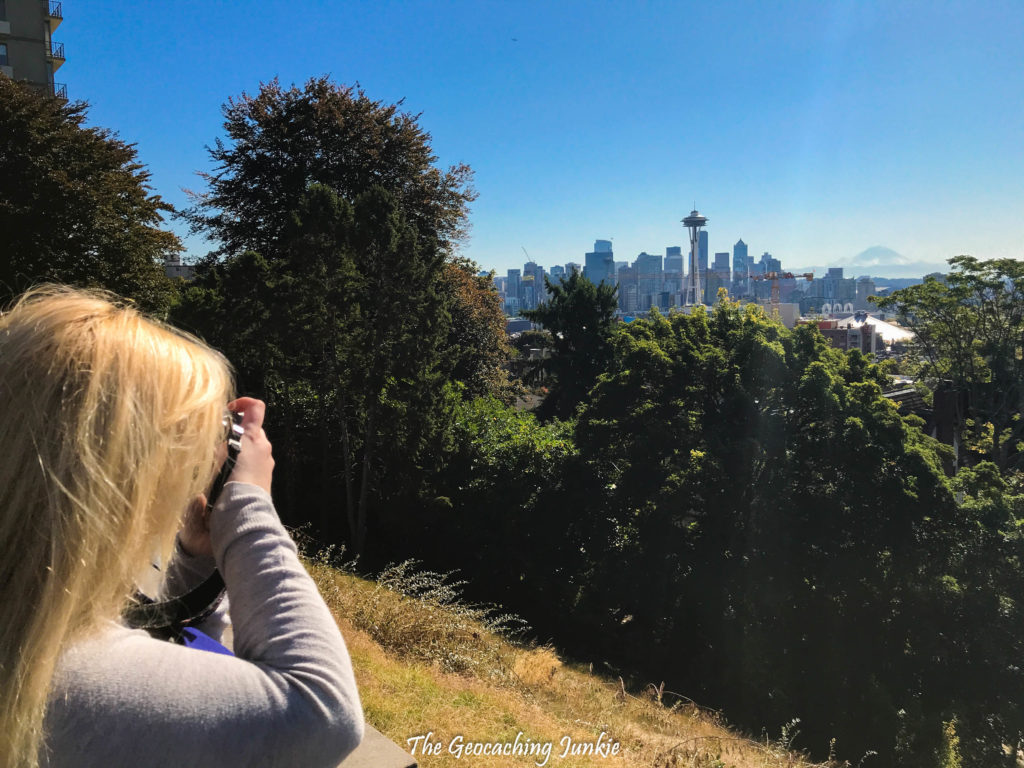 Interestingly, the view from Frasier’s apartment in the hit TV show Frasier was actually a photograph taken from the ledge at Kerry Park! This was definitely the best view of our trip to Seattle – and it didn’t cost a thing!

Kerry Viewpoint Park, GC62C8 – this quick virtual will get you to Kerry Park and that awesome view.

These were some of my favourite spots in the city on my two visits, but there are many, many more. Have you been to Seattle? What was your highlight?