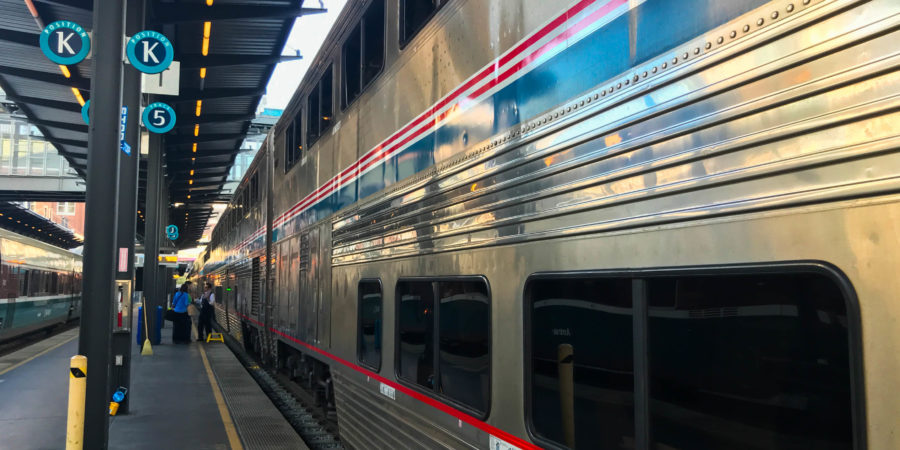 In January this year, at a time when the muggle and I were still weighing up our options for our honeymoon, and overwhelmed by the sheer number of places we both wanted to visit, I happened to chat with Wild Rover at an event and mentioned our dilemma. He highly recommended taking the train from Seattle to L.A. as a must-do experience. I have to admit, this wasn’t something I had considered before. I wouldn’t generally equate train travel with the USA. On mainland Europe, travelling by train is very popular and I explored many places by rail when I spent a year studying in Germany. I started to do a little research and found that the Coast Starlight route is considered one of the world’s great train journeys. In the end, we pretty much planned our entire trip around this single train ride! 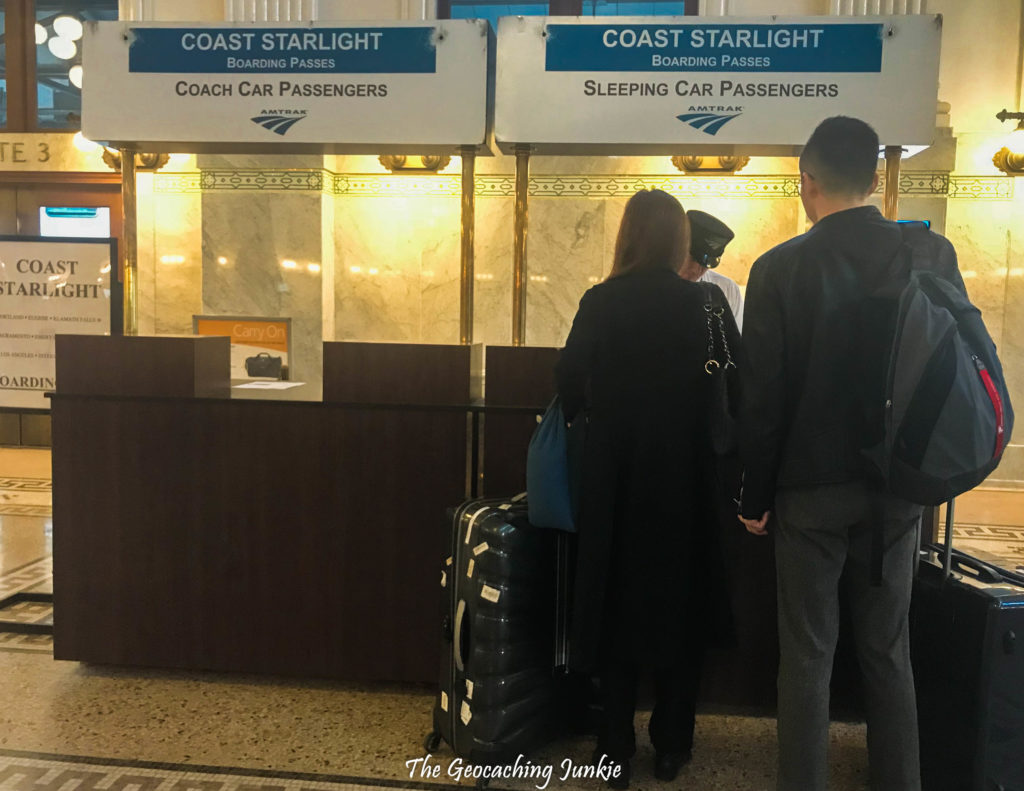 I am not a stranger to long journeys, having spent 23 hours on a bus in Argentina in 2011, and of course, flying to Australia as a teenager. This time, we would have an actual bed for sleeping at night, so I wasn’t overly concerned about our comfort.

The Coast Starlight is run by the National Railroad Passenger Corporation, commonly known as Amtrak, and has been running daily since the route was established in 1971. Our initial plan was to take the train the entire way to L.A., but we decided to stop at San Francisco for a few days and then drive the rest of the way instead. This meant spending 22 hours and 35 minutes on the train, with another 30 minutes on a bus from Emeryville to central San Francisco.

We booked directly on Amtrak’s website and the rail fare was $109 each, with another $363 for our ‘Superliner Roomette’. This type of ticket is also known as a first class ticket; basically, anybody with a sleeping car ticket is considered first class. The train also has business class tickets, where you’re still in a seat but you have a little more legroom than those in ‘coach’ class. 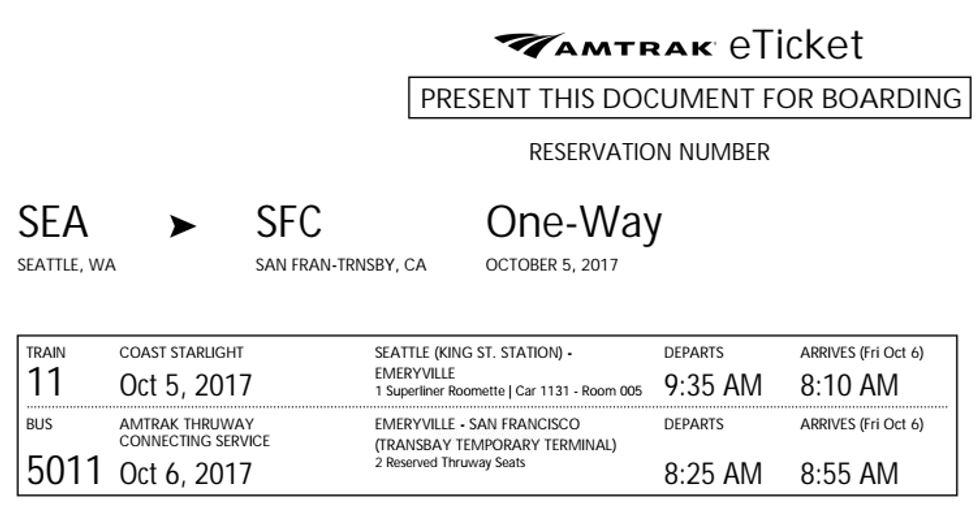 Our “Superliner Roomette” is described on the Amtrak website as “cosy”; in other words, a bit cramped. When we were sitting during the day, the room was big enough for both of us, however, when the beds are made up, it is very hard to move inside the roomette, particularly with any carry-on luggage to contend with.

It’s also quite difficult to sleep, especially on the top bunk. We did a little research before the journey and found the below video from travel blogger Kelley Ferro, who has several YouTube videos about travelling on Amtrak on her channel. In it, she says that taller people should sleep on the bottom bunk, as there’s more room (2’4″ x 6’6″ versus 2’0″ x 6’2″). So that meant little old me was banished to the top bunk! To be fair, I didn’t protest too much; I slept in a top bunk for years growing up. This experience, however, was not like that at all. Not even a little bit.

There was very little space in between the bunk and the ceiling, so it’s not ideal if you’re claustrophobic at all. The main problem I had was the fact that the ‘strap’, which is supposed to keep you safe from rolling out of bed, did not fill me with confidence that it would do a sufficient job. This feeling, combined with the sensation of being on a plane flying through turbulence, made it very difficult for me to get any sleep at all. 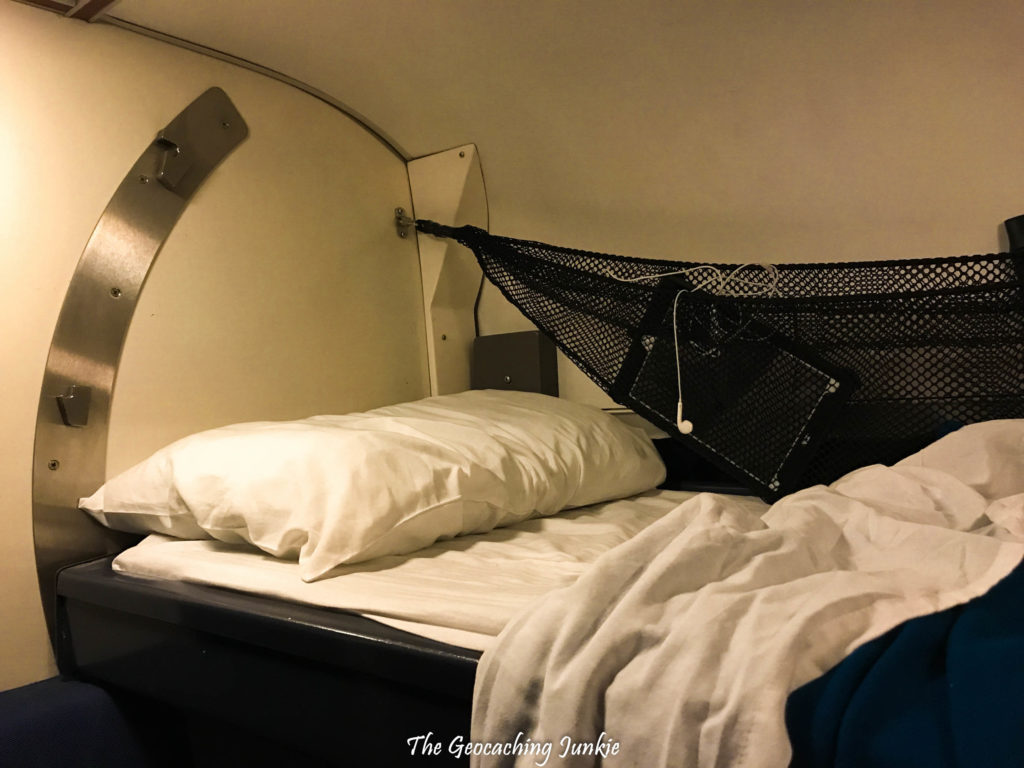 There is an alternative to the roomette though: the bedroom. It’s quite a bit bigger than the roomette, so you can keep your luggage with you; it has its own private toilet and shower, so you don’t have to put your shoes on every time you have to go (less than ideal in the middle of the night!). The chairs on the ground level convert to a double bed, and there is also a single top bunk, so if there’s two of you, nobody has to climb up top. The only issue with the bedroom is the price. It’s almost double the cost of a Superliner Roomette. If money is no object, it’s a no-brainer to choose a bedroom, but we don’t all have that luxury unfortunately!

The best part of our journey was undoubtedly the food. It’s really good. We had three meals during our time on the rails: lunch, dinner and breakfast. There are two restaurants: the main, dining car and the smaller parlour. Meals in both are included in the price you pay for your roomette or bedroom. 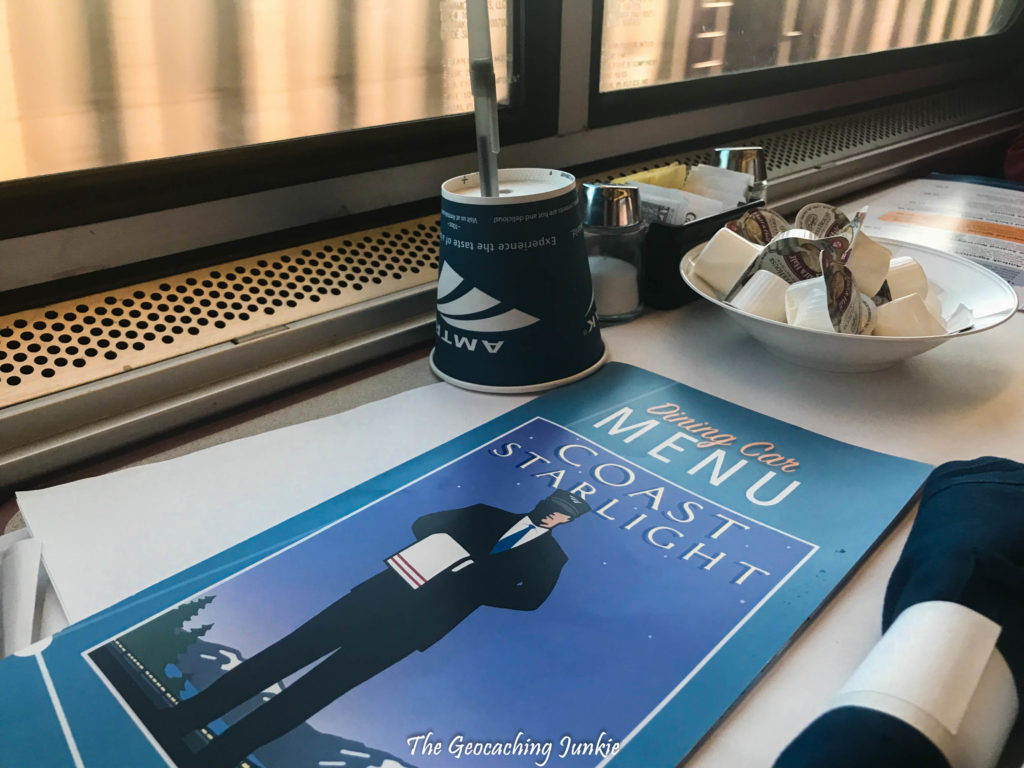 For lunch, we had delicious burgers with pecan pie to follow; dinner was ‘Land & Sea’: a juicy steak with a shrimp and crabcake, followed by chocolate tart. In the morning, I had to die for pancakes with crispy bacon. Soft drinks were included, but alcohol could be purchased. 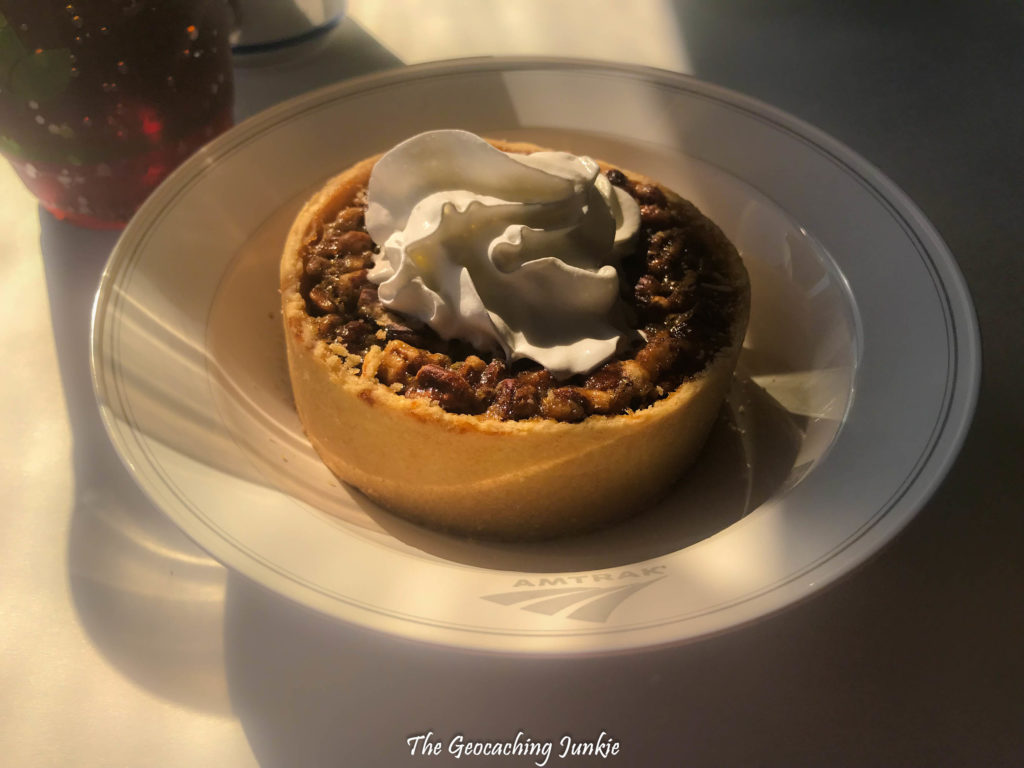 Both restaurants practice what they call ‘community dining’, meaning, if you have less than four people in your party, you’ll be making some new friends at dinner! We met some really lovely and interesting people during our meals, including a 92-year-old WWII veteran, who I was completely in awe of.

“How was the train journey?”

Seriously though, as much as the sleeping arrangements were far from ideal, spending 22 hours plus on the rails was without doubt an experience I will never forget. We met people on the train who had spent 3 nights in a roomette from Chicago to Seattle, and were spending another night on the Coast Starlight…. I don’t think I could do that, but one night is eminently tolerable – if just for that delectable menu! 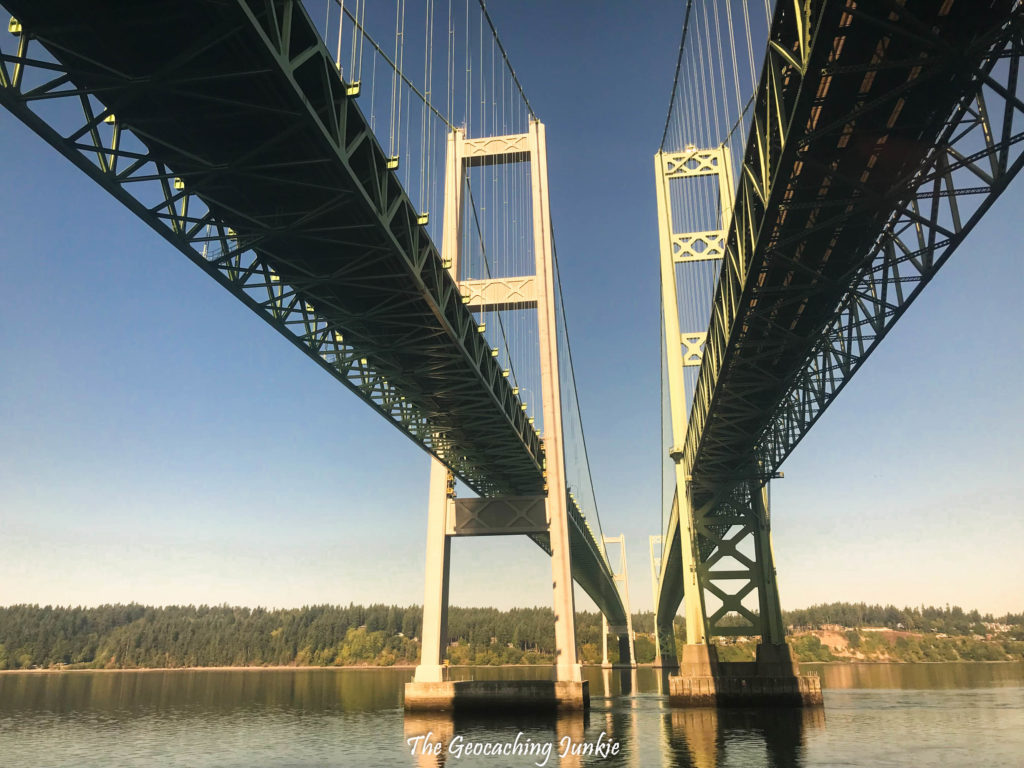 Some of the views from the train were really great and during the day, there was an optional wine-tasting session (for $7.50 per person), which was something fun to do in between watching the world roll by – or Netflix binge-watching! It was certainly a more relaxing way to travel than driving on the wrong side of the road 🙂

What’s the longest journey you’ve ever undertaken and how did you travel?