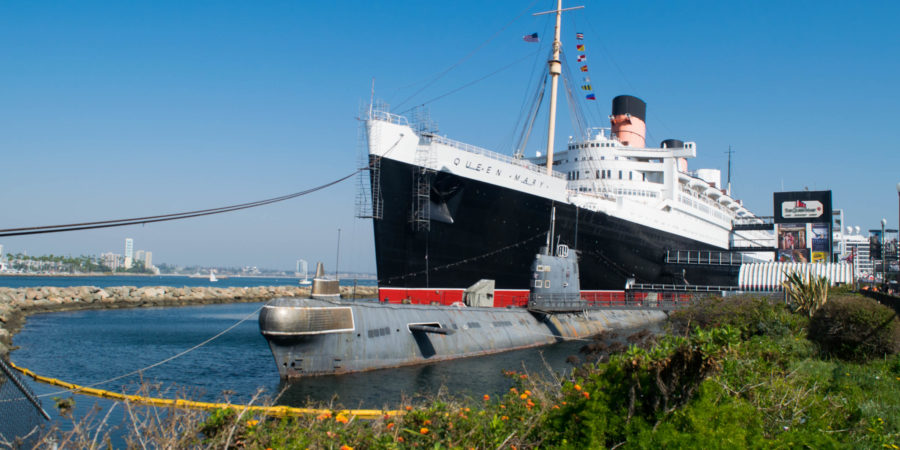 In addition to the timely reactivation of the Project A.P.E. cache in Washington, which meant I could add a new cache type to my stats, there was another serendipitous event while we were in the U.S.A: the Geocoinfest mega was taking place in Long Beach! The muggle was, as you might expect, skeptical when I mentioned this to him. A little holiday geocaching goes without saying, but a mega event?! It seemed like a step too far. However, when I informed him the event was to take place on the Queen Mary, he went off and did a little research unbeknownst to me. Before I knew it, he was not only happy to go to the event, but he suggested we try to book a room on the ship for the night – result! 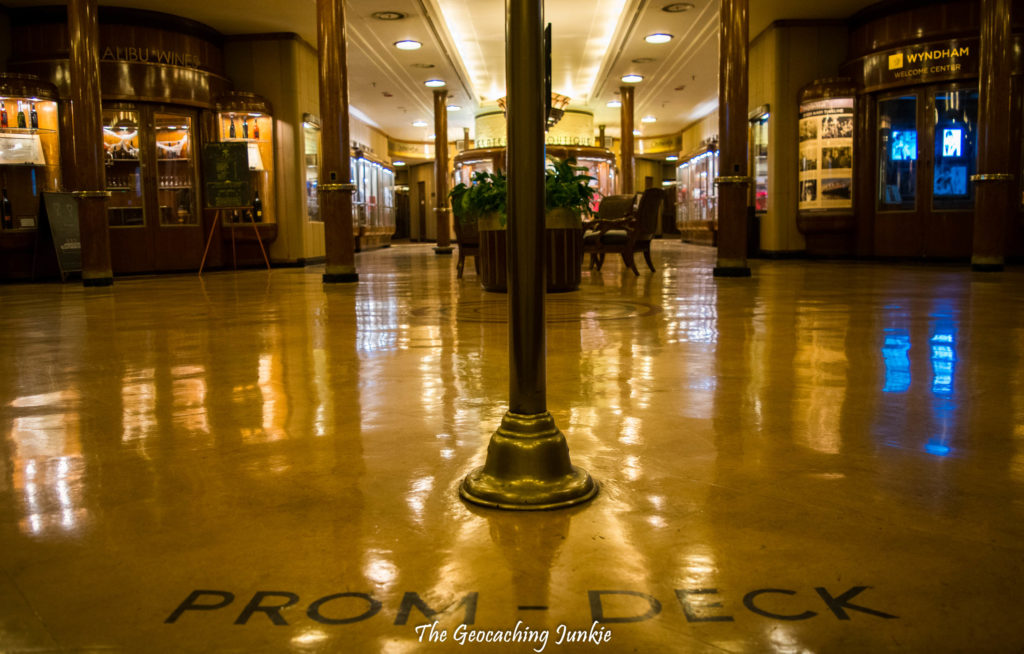 The RMS Queen Mary departed Southampton, England on her maiden voyage in 1936 and since then has had a long and varied history, not only taking passengers back and forth across the Atlantic, but also ferrying Allied soldiers during World War II. The ship carried some very well-known passengers, including the Duke & Duchess of Windsor, Audrey Hepburn and Winston Churchill, who was listed on the manifest as “Colonel Warden.” After becoming too expensive to run, the Cunard Line decided to retire the ship from service in 1967. 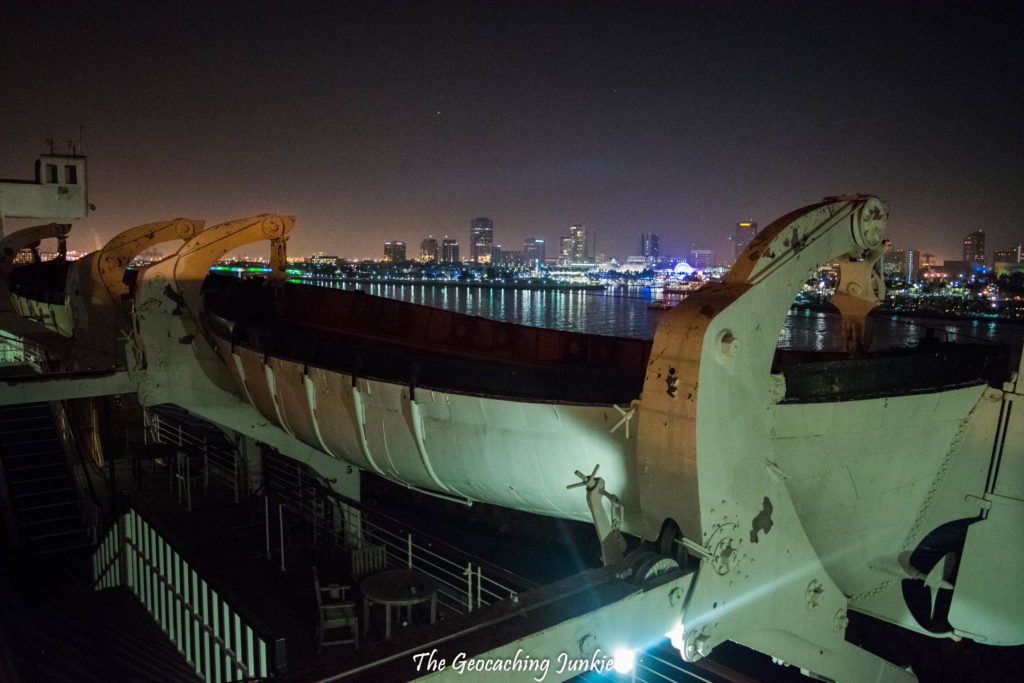 The ship’s final departure from England saw it heading south, rounding Cape Horn (the southernmost tip of South America), before arriving in Long Beach, California on 9th December 1967. In 1971, the ship opened its doors to tourists and today, it’s home to a hotel and restaurants, as well as offering guided tours. Sadly, the Long Beach Press Telegram reported earlier this year that a survey compiled by naval architects and marine engineers identified many areas of deterioration in the ship, which could lead to flooding and it’s estimated that repairs could cost up to $300 million. I really hope that the much-needed repairs can be made to preserve this historical ship, because it’s one of the most unique hotels we have ever stayed in.

He didn’t tell me that

While sleeping somewhere like the Queen Mary is undoubtedly a special experience and I’m all for trying unique things, what the muggle failed to tell me when he enthusiastically suggested we stay there, is that the ship is considered one of the most haunted locations in America. I discovered this while browsing on Facebook the week after we had booked one of the last available rooms for the night of the mega. I stumbled upon a Buzzfeed article entitled “We Slept In The Most Haunted Room On The Queen Mary And It Was Terrifying”. The “most haunted”, you know, implying different rooms had different degrees of …. haunted. 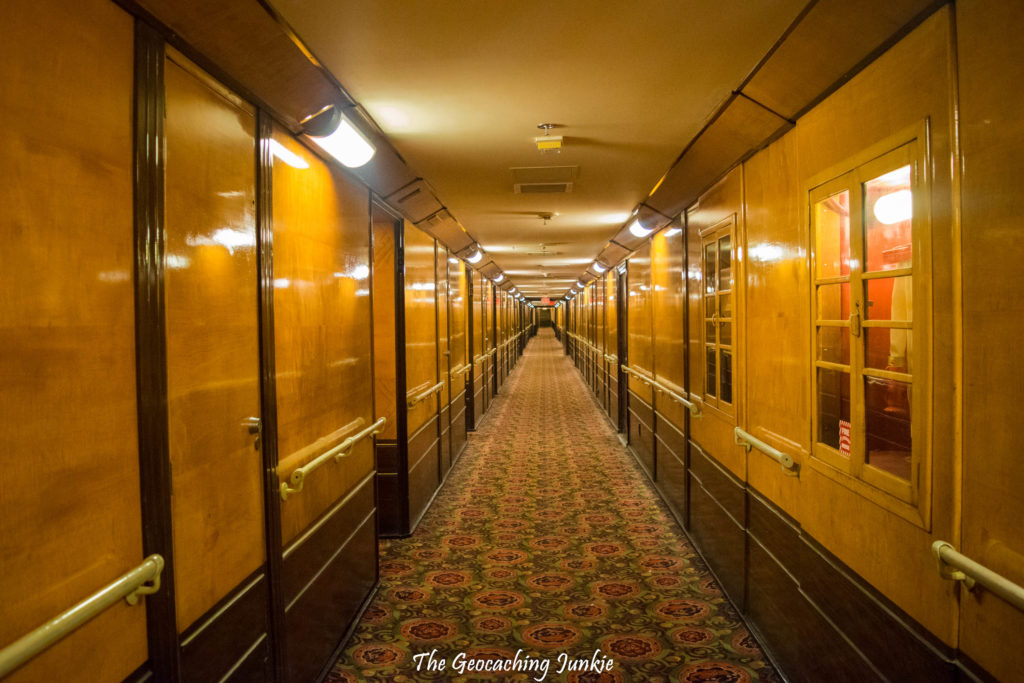 The ship operators very much play on this angle, offering various tours for ghost seekers, including a ‘paranormal shipwalk tour’ and a ‘dining with the spirits’ experience. There were 49 recorded deaths on board over the years, so there is certainly the potential for spirits, and a simple internet search will turn up a plethora of ghost hunting articles and videos about it. After reading that Buzzfeed post, though, I made a conscious decision not to read anything more about it until we were safely home, in case I ended up talking myself out of staying there. Right about now would be a good time to tell you all about my paranormal experiences on the Queen Mary, but the fact is, there is nothing to tell. I didn’t even really find the ship that creepy, which surprised me. Maybe I’m not ‘tuned in’ enough – something I am rather glad about! 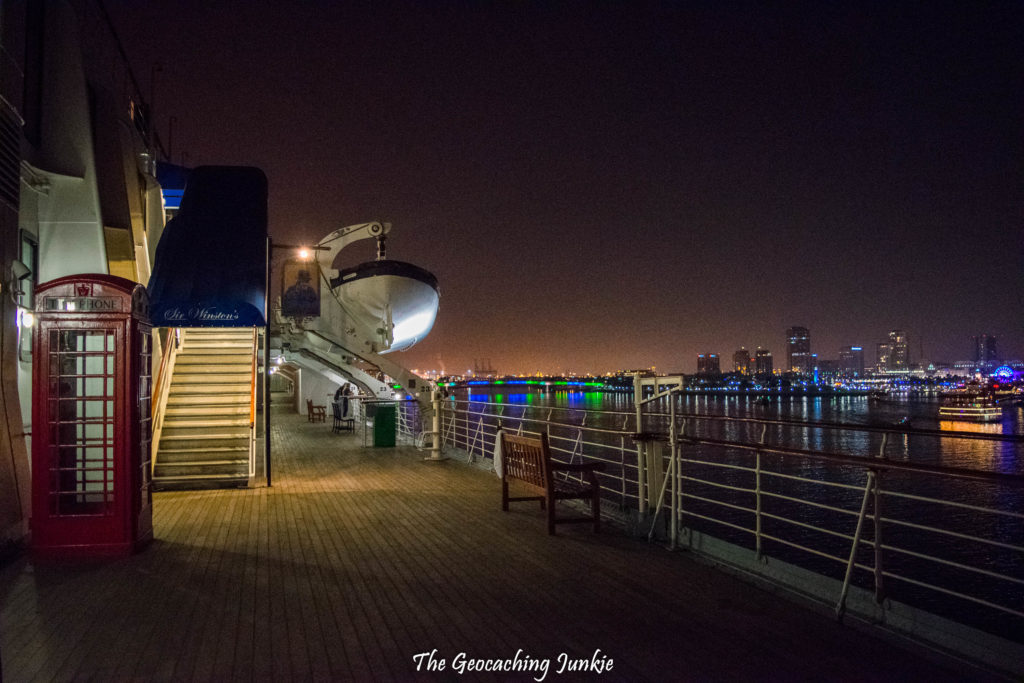 Though the bar and restaurant seemed relatively busy in the evening when we went to eat, we met hardly anybody when we went for a starlit stroll on the decks. Maybe everyone had been reading those ghost stories?

I was excited to attend a mega event outside of Europe, to see how it would compare to my experiences up to now. The location was undoubtedly unique, and the Britannia Lounge was possibly the fanciest room I’d ever perused geocaching wares in. There was a fantastic raffle with so many amazing geocoins and other prizes up for grabs (I didn’t win any unfortunately), and there was some great geocaching stuff for sale. 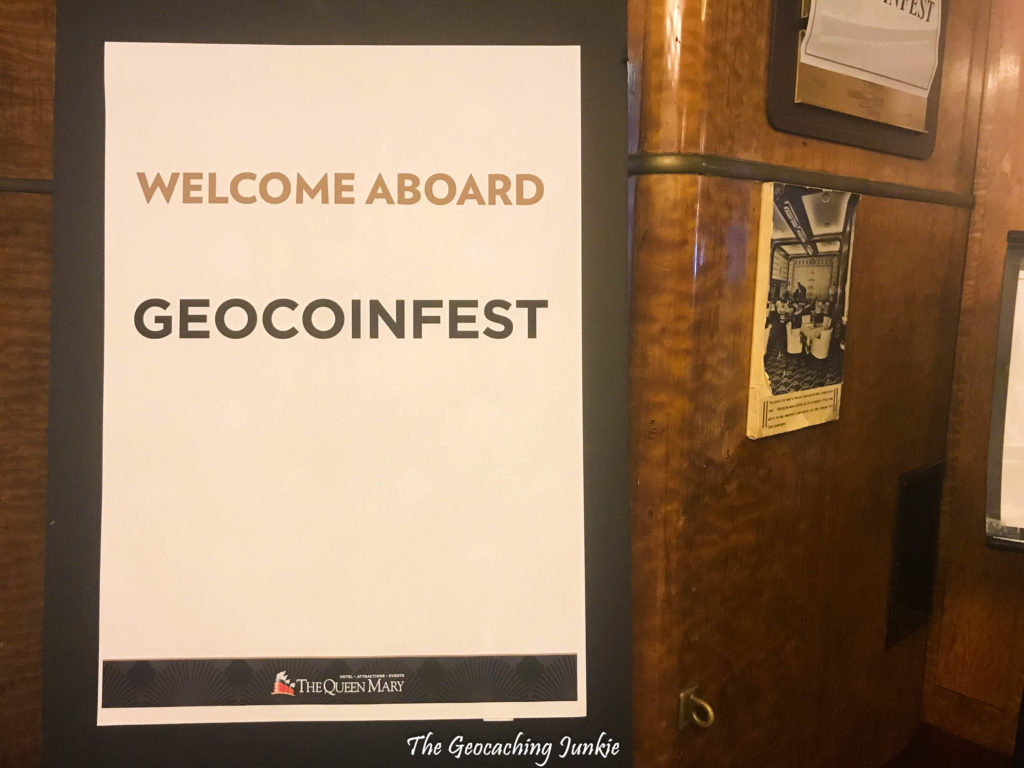 As well as the vendors, Treasure director Chris Williamson and lead actor Ansley Gordon had a table promoting the film and it was great to meet them after enjoying the movie. I even nabbed my own copy of the Blu Ray and the impressive new Treasure geocoin. 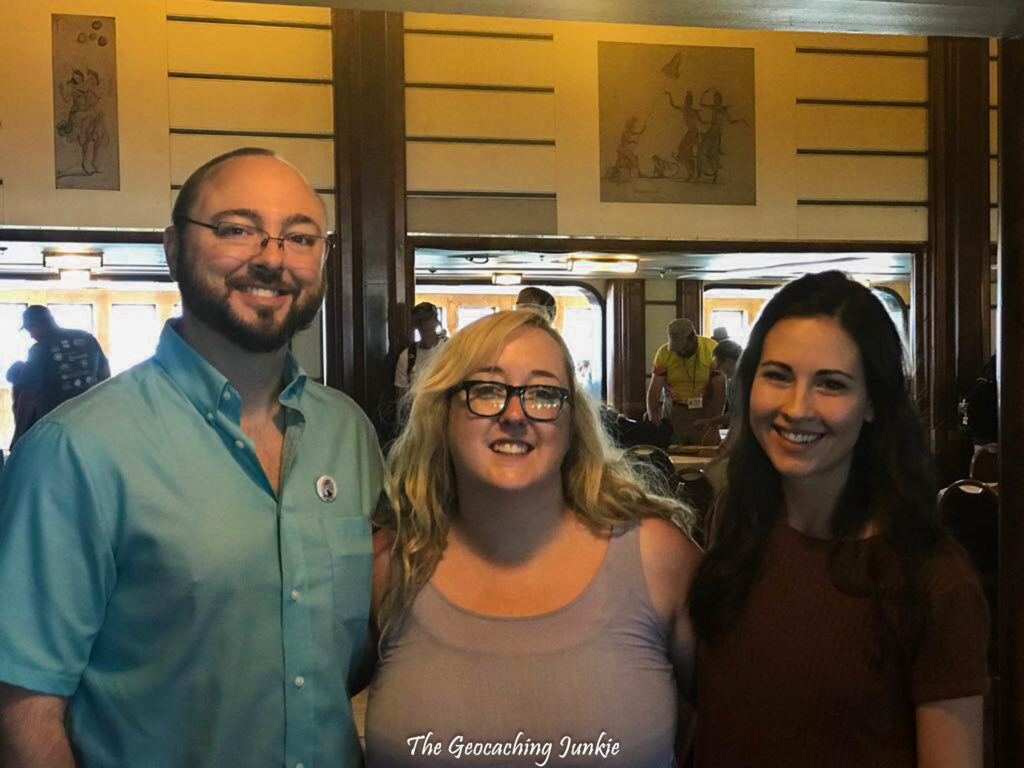 I also met up with Sonny and Sandy from Podcacher and spoke to Sonny for the podcast, which you can listen to here. Sonny and Sandy have produced over 600 shows and Podcacher is without doubt the most widely recognised geocaching podcast out there. I was delighted to chat with Sonny last year about one of my Christmas blog posts and it was great to actually meet them both in person. 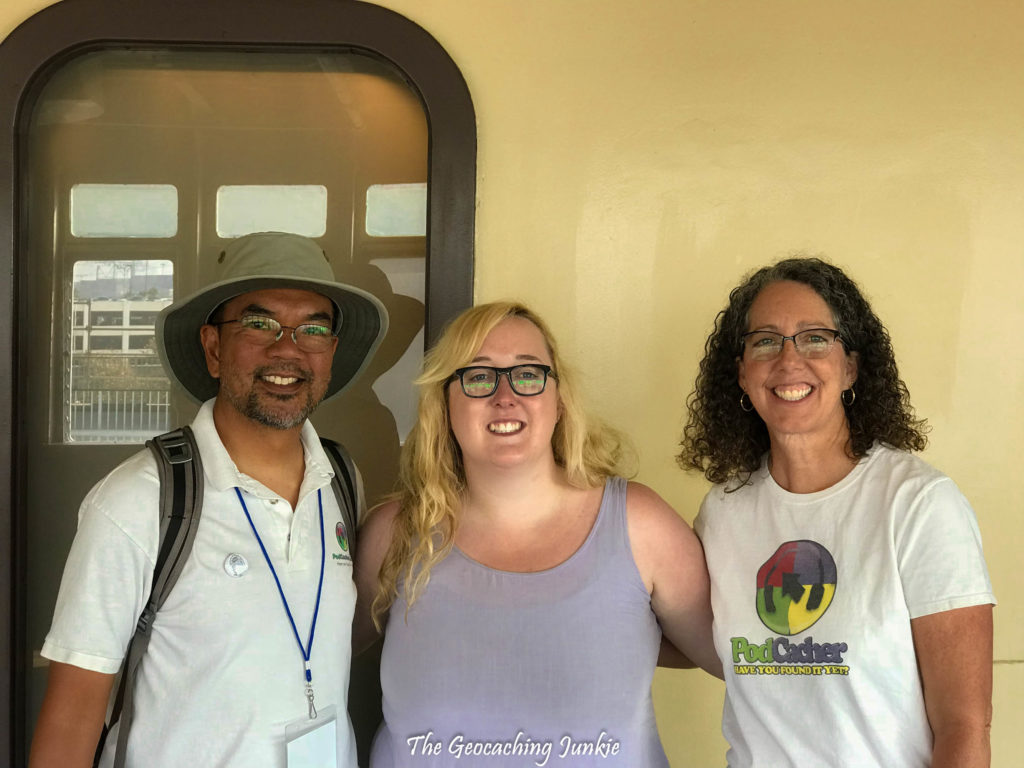 The mega organising committee put on some great seminars for attendees and although we were busy, we managed to attend one, GSAK: The Basics, presented by Scott Miller, who had very kindly paid for our drinks when we got chatting to him in Starbucks and informed him we were on our honeymoon! The seminar taught me that I have a lot still to learn about GSAK if I’m really going to grasp it! 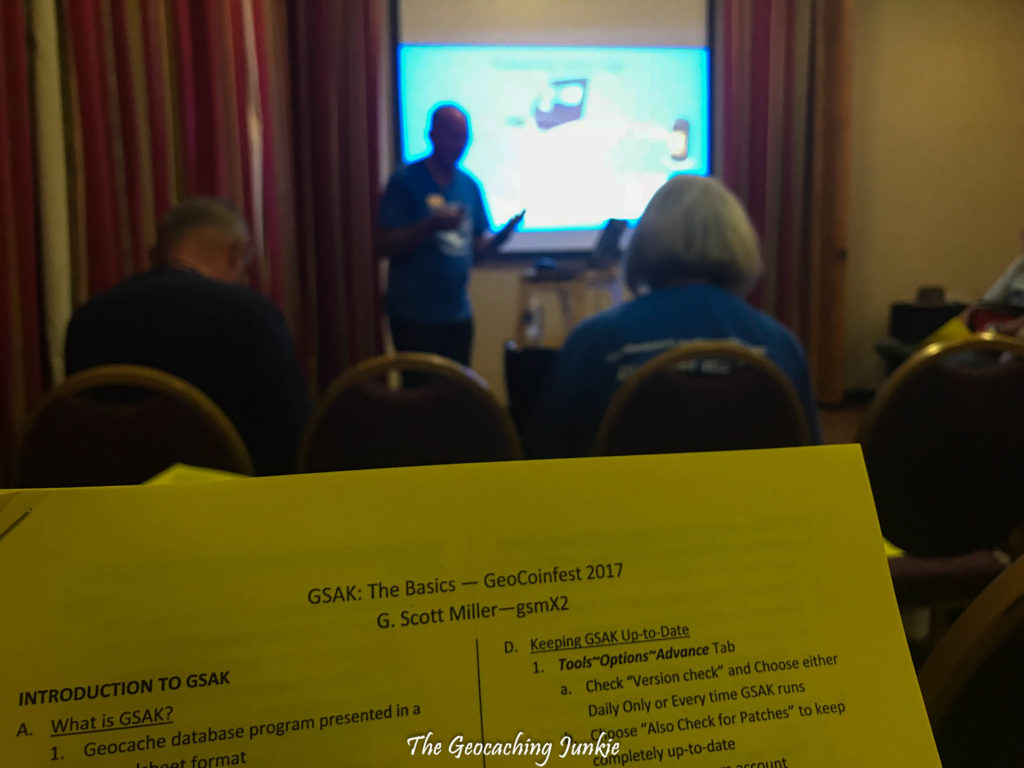 After signing the logbook, browsing (and buying!) some of the wares for sale and chatting with several people I’ve only ever met online before, it was time to get a few finds under my belt, so I ventured out in to the Southern California heat to search for a few geocaches in the area. As always with mega event geocaching, I met some geocachers at almost every GZ. At one point, a junior geocacher whispered to her mom, “she’s from Ireland.” My name badge had given me away 🙂 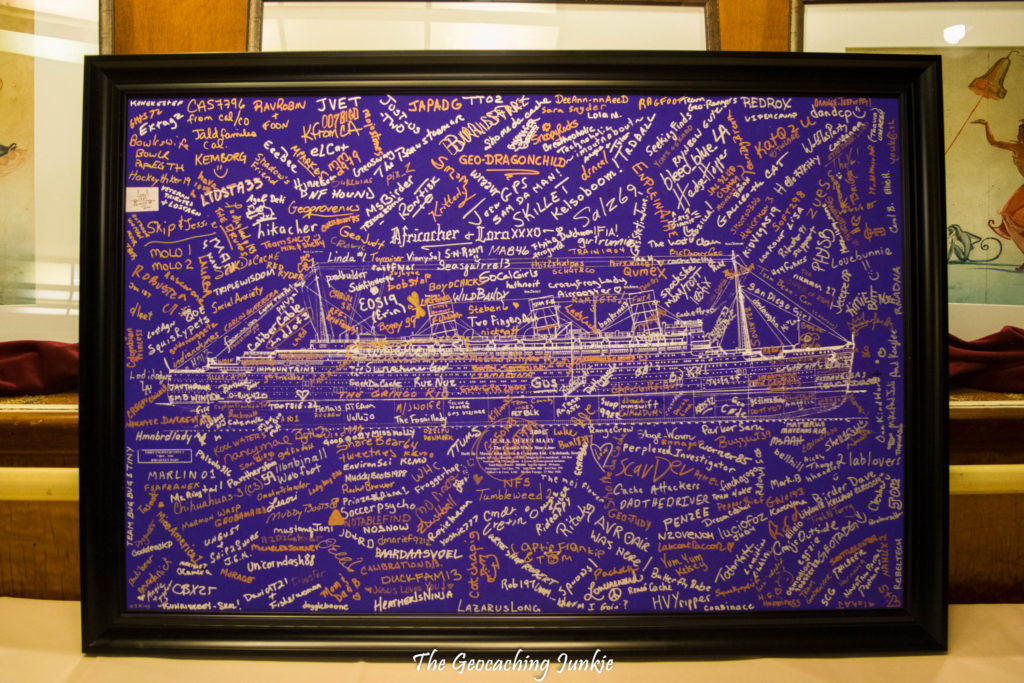 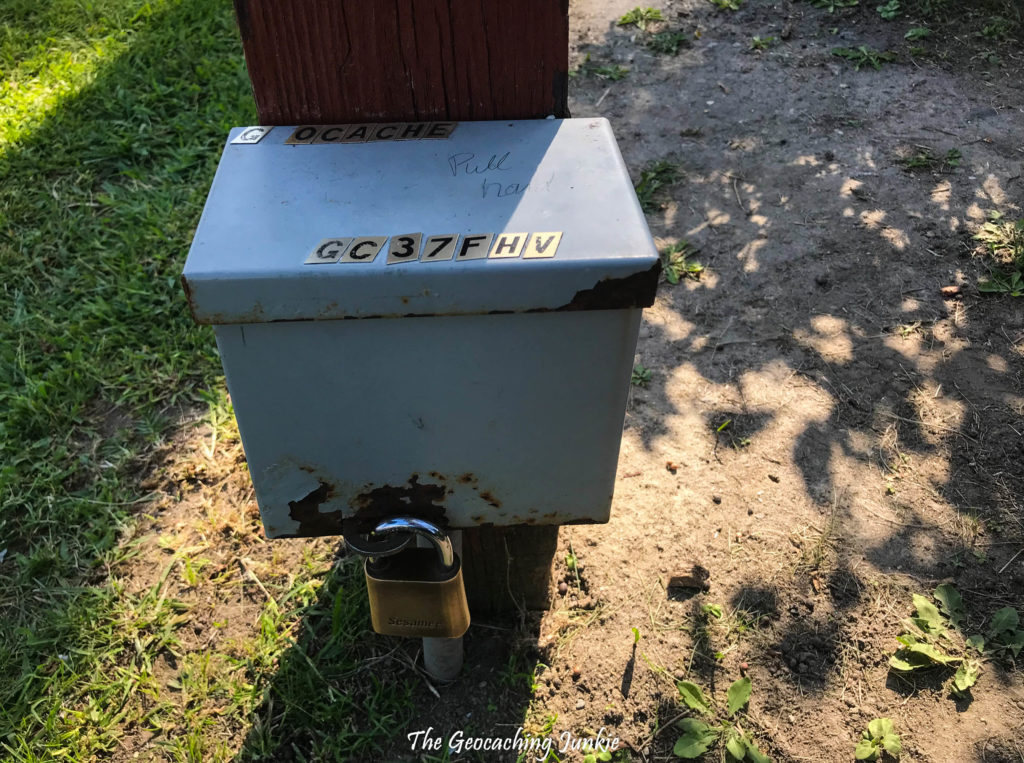 After attending my first mega event in the US, it seems that they are by and large equally enjoyable no matter where you are: geocachers mingling and having fun, lots of great geocaching wares to tempt you, and a great deal of passing logbooks around at GZ! It seems that we are basically the same the world over – we are lucky to have such a great global community. 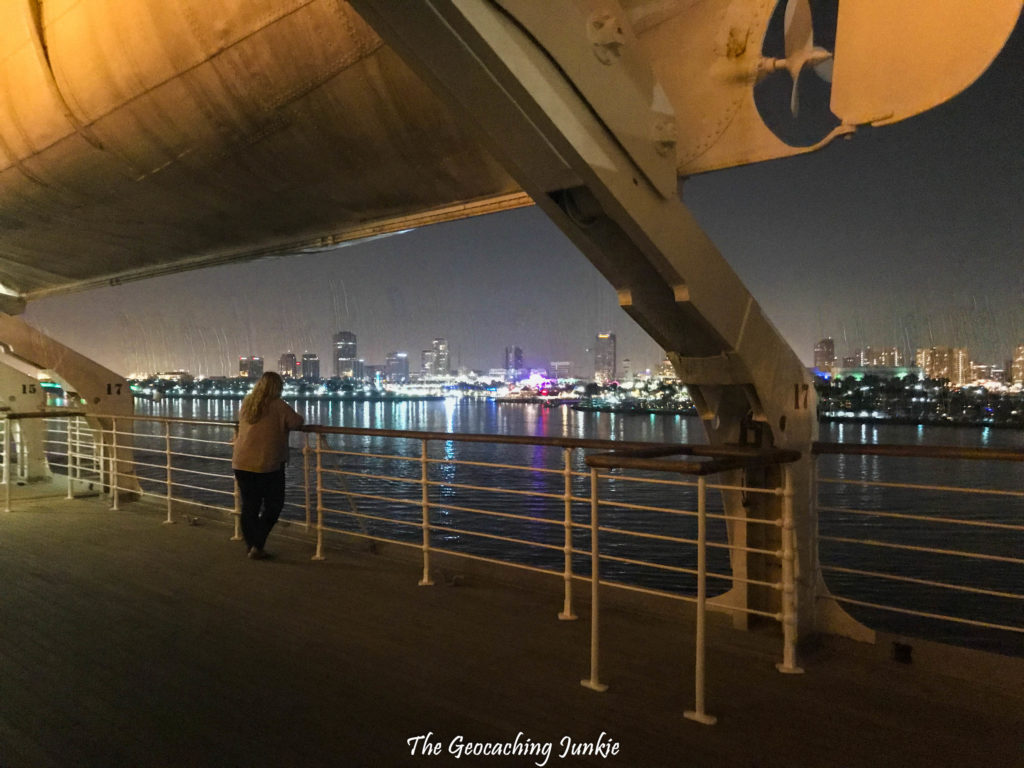 Have you attended many mega events? Which was your favourite? Let me know why in the comments!