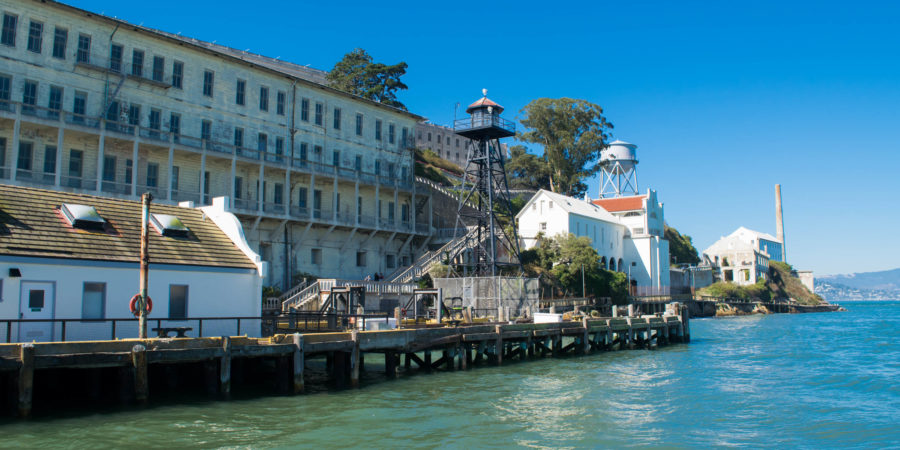 When we decided to add a weekend in San Francisco to our USA trip, there was one thing we both agreed was top of our must-see list: Alcatraz Island. ‘The Rock’, as it’s often called, sits 1.25 miles offshore in San Francisco Bay. The infamous ‘inescapable’ prison is synonymous with the city and is rated the number one ‘thing to do’ on Tripadvisor. 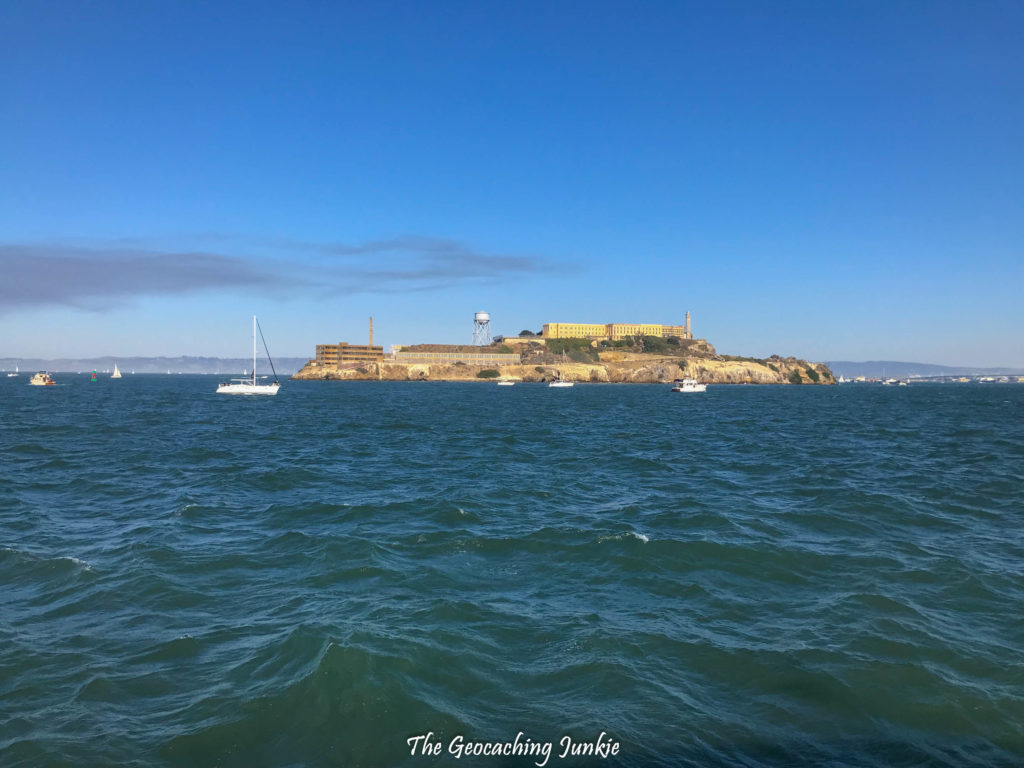 We booked our visit online months before we arrived. It’s definitely a good idea to get your tickets in advance if you’re only visiting the city for a short time, particularly during peak season. The tickets cost $37.25 per adult from Alcatraz Cruises.

Alcatraz Cruises offers a variety of different tours, including a night tour, which I was definitely not going on. I am not a fan of the creepy. We opted for the day tour and were set for an 11am departure from Pier 33. We used our hop-on hop-off bus tickets to get to the pier. However, you can take the F line streetcar from Market Street to get you there. 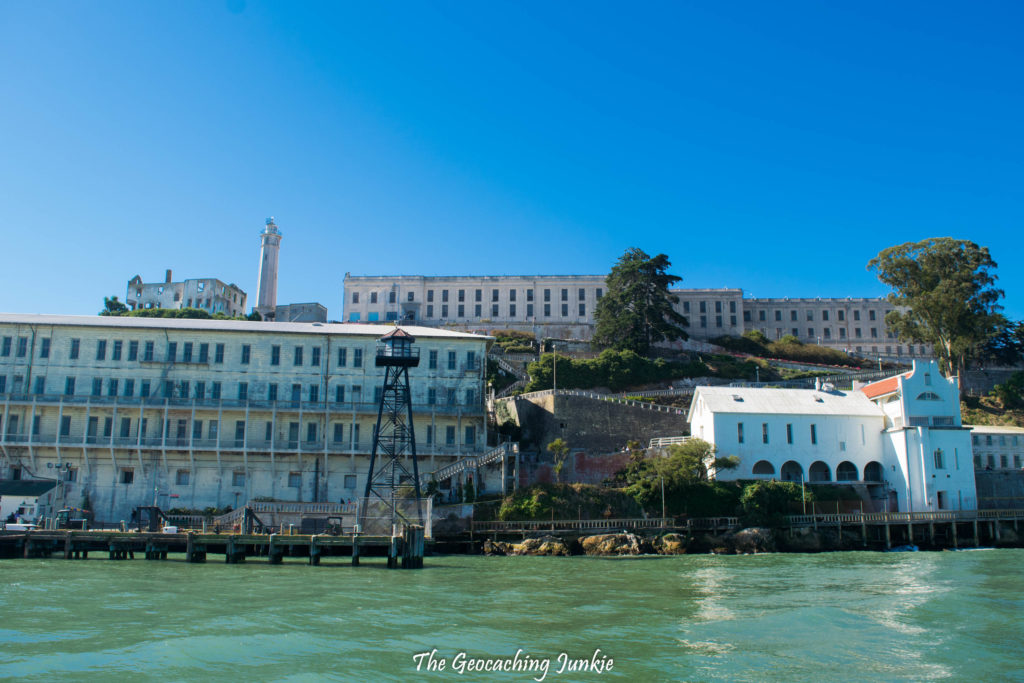 The ferry ride takes approximately 20 – 25 minutes across and there are some great views of the bay to enjoy, from the Bay Bridge all the way to the Golden Gate.

A park ranger greeted us after we disembarked the ferry. He gave us the lowdown on the island, how to pick up our audio tours and, of course, the obligatory health and safety disclaimers. We were then free to explore the island at our own pace. 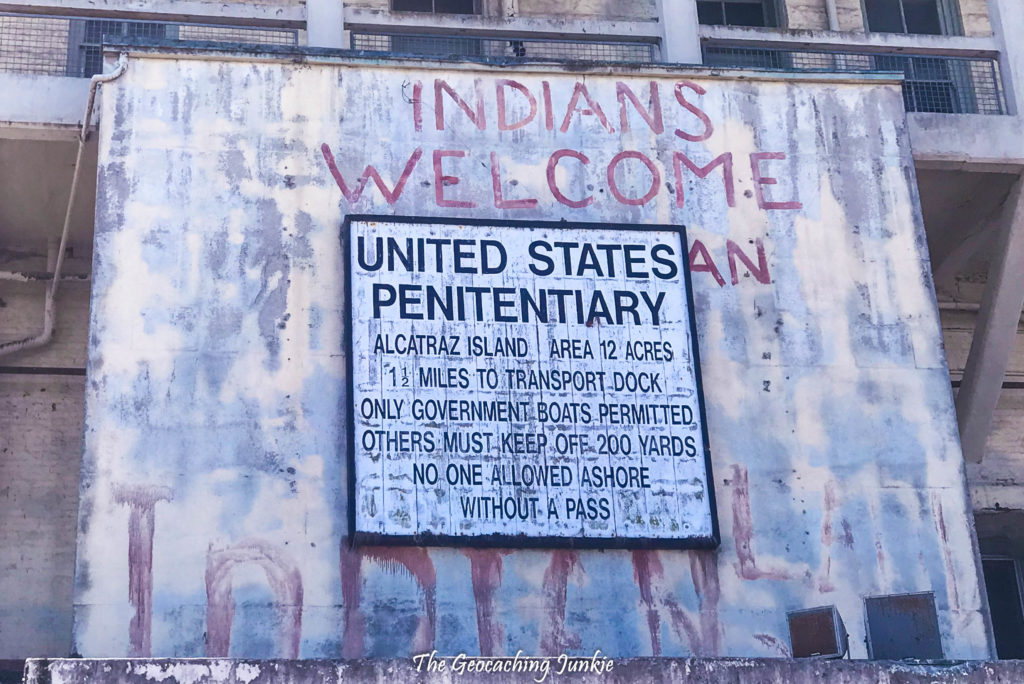 The island was not always a federal prison. It was first recorded in the 18th century by Spanish naval officer, Juan Manuel de Ayala y Aranza, who called it ‘La Isla de los Alcatraces’. The name came from the archaic Spanish word for pelican. The birds were the island’s only inhabitants at that time.

Before it was a United States Penitentiary, Alcatraz was established as a military fortress in the mid 19th century, and was used to house prisoners of war from 1861. In 1934, the island became a federal penitentiary and was intended to house ‘troublemakers’ from other prisons. 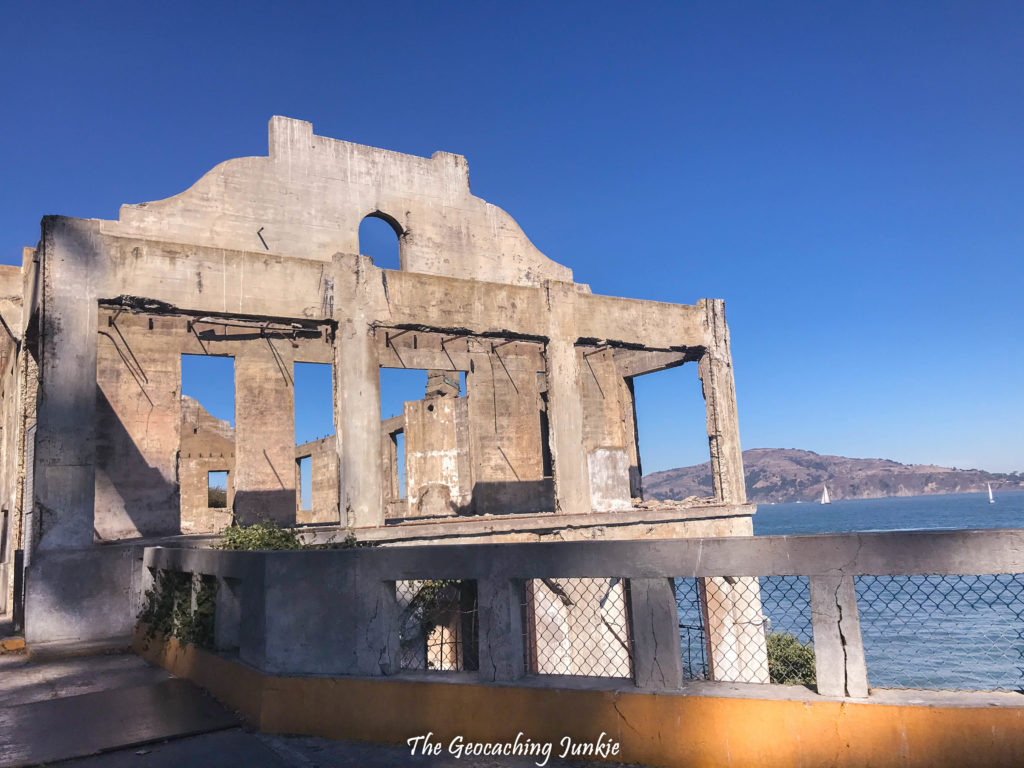 Jailhouse on The Rock

An audio tour called Doing Time: The Alcatraz Cellhouse Tour is included in the ticket price. I’m not the biggest fan of audio tours; I much prefer human tour guides, but they are sadly a dying breed. In saying that, this audio tour is really good. It features the voices of actual correctional officers and prisoners, recounting some of their experiences living and working on Alcatraz. 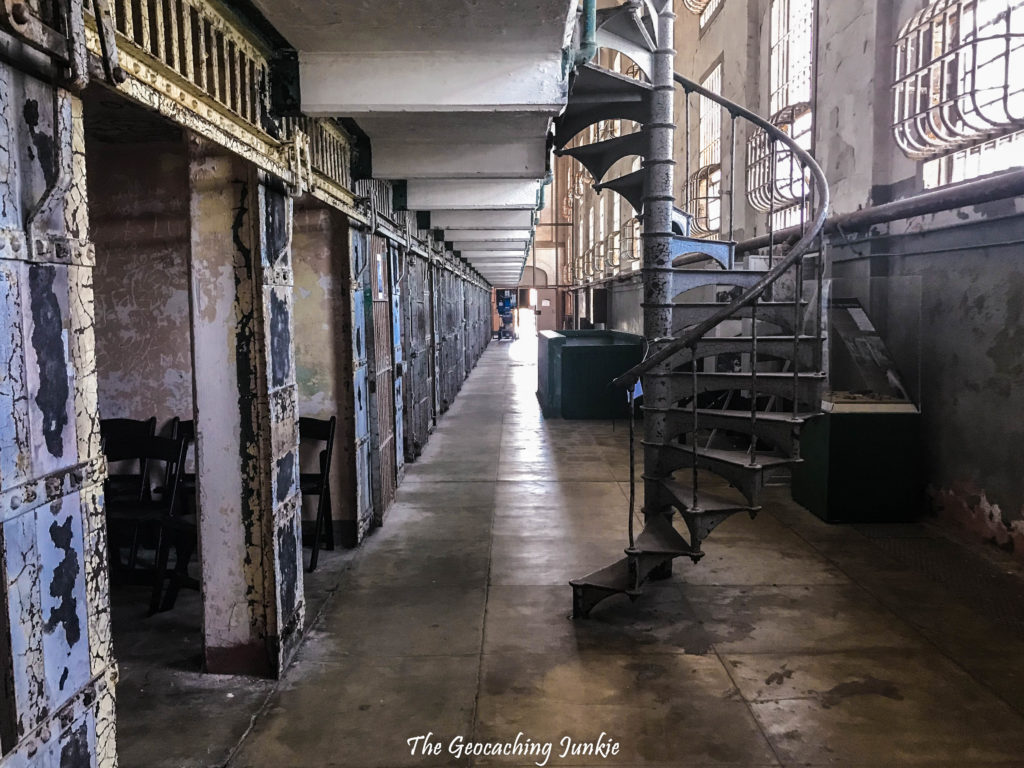 Arguably the most famous of the island’s inmates was Al “Scarface” Capone. The infamous crime boss was transferred to the island soon after it opened. Capone played the system in other prisons, having many of the guards in his pocket and living a life of luxury from his cell. He spent four and a half years on Alcatraz and made several attempts to get the warden, James Johnston, on side. Johnston never relented though, and Capone one day remarked to him: 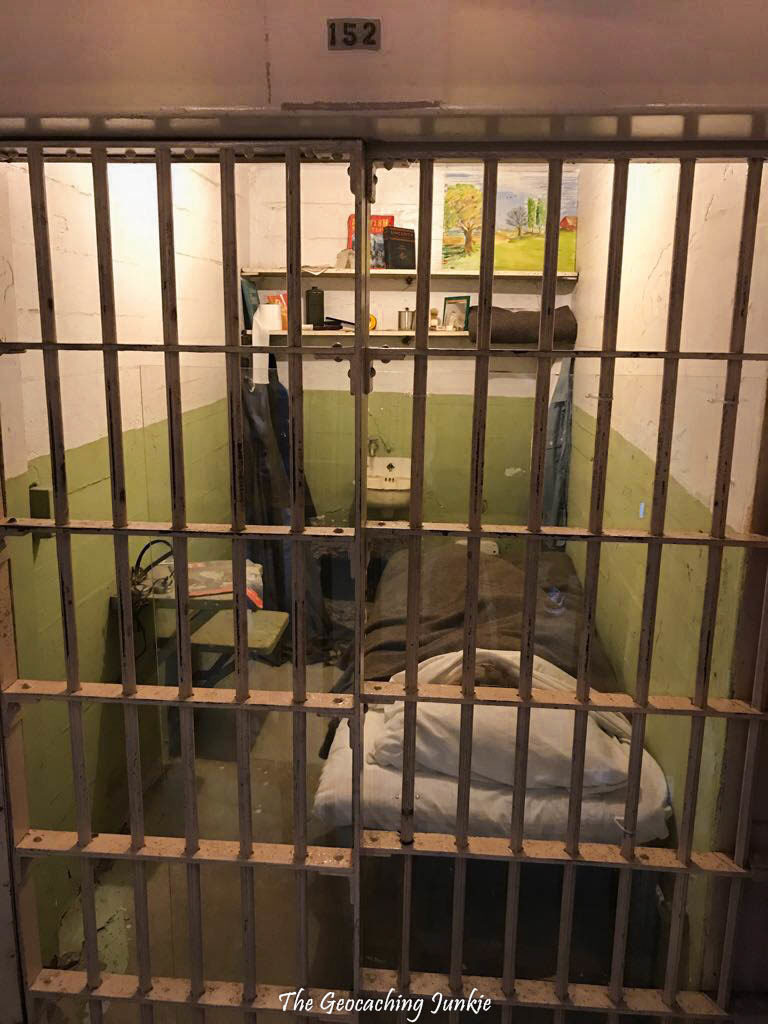 Many attempts were made to flee Alcatraz over the years. Perhaps the most famous was chronicled in the 1979 Clint Eastwood movie, Escape from Alcatraz. It tells the story of three prisoners’ elaborate and meticulously planned escape from the island, which involved papier-mâché dummy heads used as a ruse. The audio tour gives a great account of the escape, with first-hand narrative from one of the guards who was on duty the morning the dummy heads were discovered. 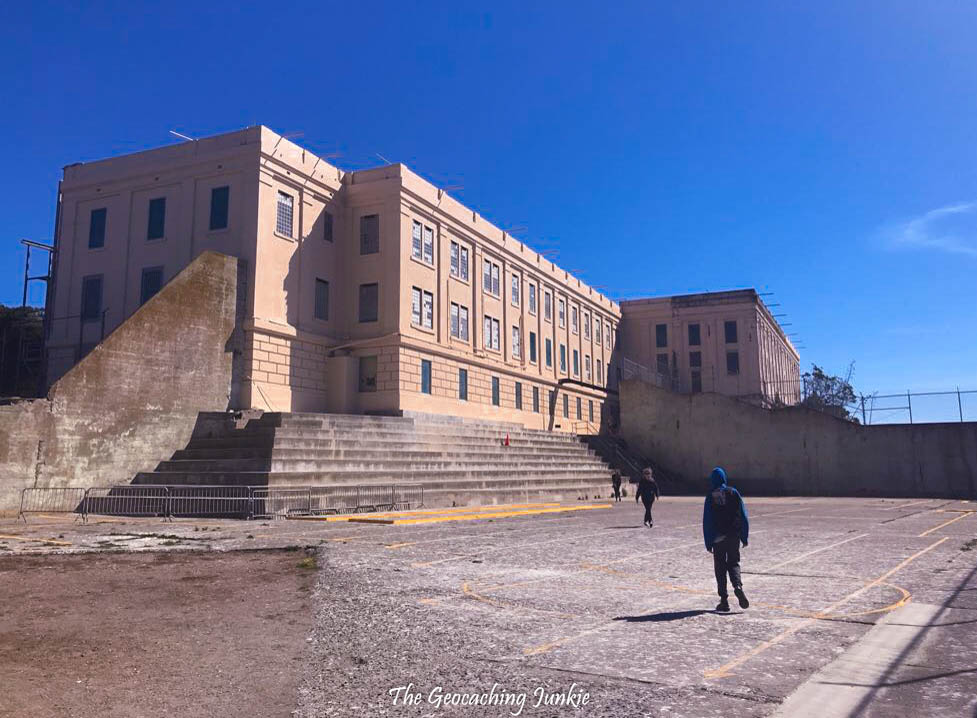 While we were wandering around the cell house, we stumbled upon a volunteer talking to a gathered crowd about the mechanics of the cell doors. The most interesting snippet she shared was that the sound of a row of cell doors closing was used as the sound of Darth Vader’s shuttle door opening and closing in Star Wars: The Empire Strikes Back. 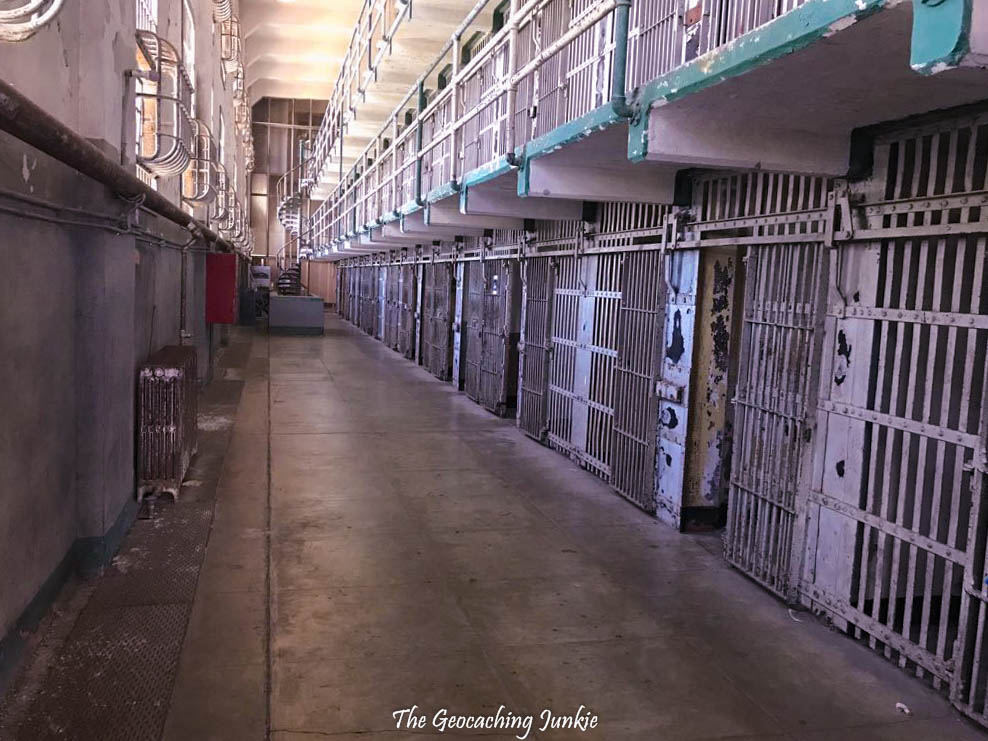 The lighthouse on Alcatraz was the first one on the U.S. West Coast, which is a pretty impressive claim to fame. In 1969, a group of Native Americans “occupied the island to protest federal policies related to American Indians.” The occupation lasted two years and graffiti from this period is still visible in many locations, including on the water tower and on the ‘United States Penitentiary’ sign visible when you first arrive. 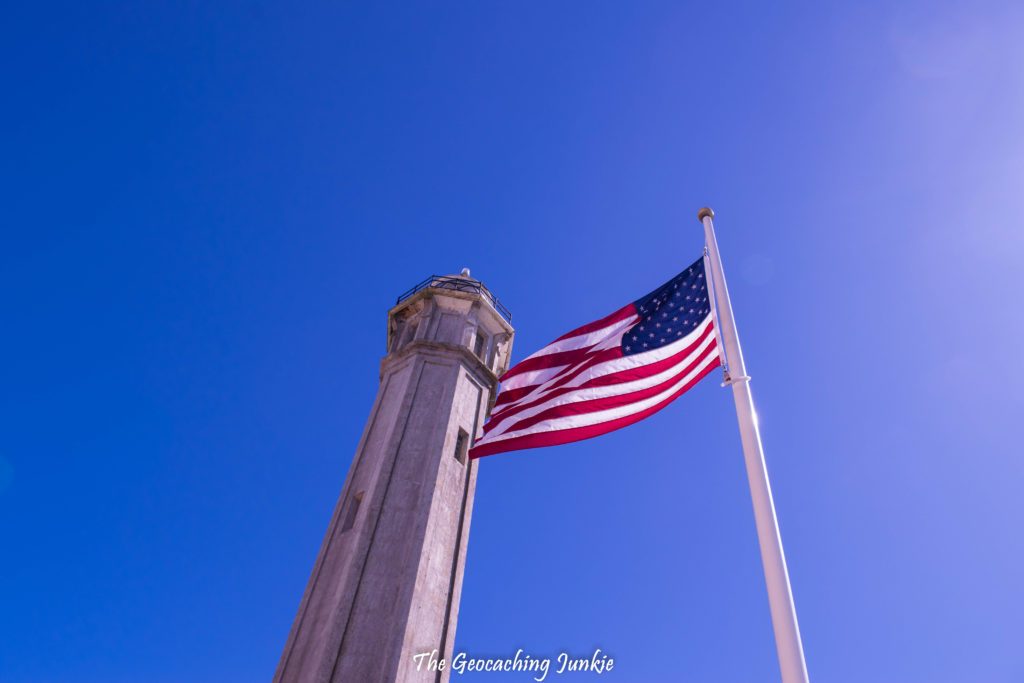 Geocachers get a little extra when they visit Alcatraz: a Virtual and an EarthCache! The Virtual Cache, aptly named Escape from Alcatraz (GCF7A2), is the second most favourited geocache in San Francisco and rightly so. The description states that this is a ‘role-playing cache’: at 12 waypoints, you must meet with various people and complete various ‘tasks’ to help you plot your escape from The Rock.

The cache owner, Jbond, has gone to a lot of trouble with this cache and if you answer all the questions correctly, you even get a certificate to say that you escaped from Alcatraz. Unfortunately, we failed on the very last question, and although the CO graciously gave us permission to log, we were sent back to ‘The Hole‘:

If any of your answers are wrong then your escape will have failed. You will be recaptured and brought back to “The Rock” to spend time in solitary confinement. (And, you will not get the nifty certificate.) 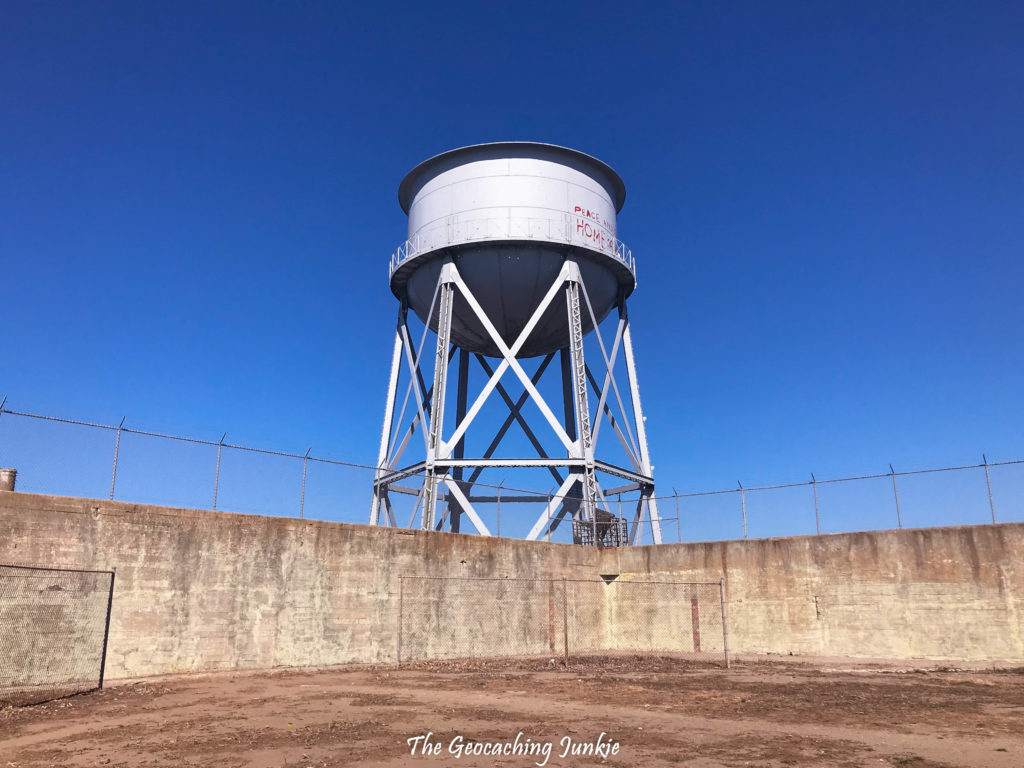 We also did the EarthCache, Alcatraz ‘the rock’ Formation Earthcache (GC238HF), while we walked around the island. Learning about the geology of somewhere as interesting as Alcatraz is always a nice bonus for me, but then I do love EarthCaches!

Is It Worth Visiting?

In short: yes. It’s pretty much an unmissable experience if you’re visiting San Francisco. If you don’t go for the fascinating history, at the very least, go for the excellent views of the entire Bay Area. And if you’re a geocacher, well then, go for the geocaches as well! 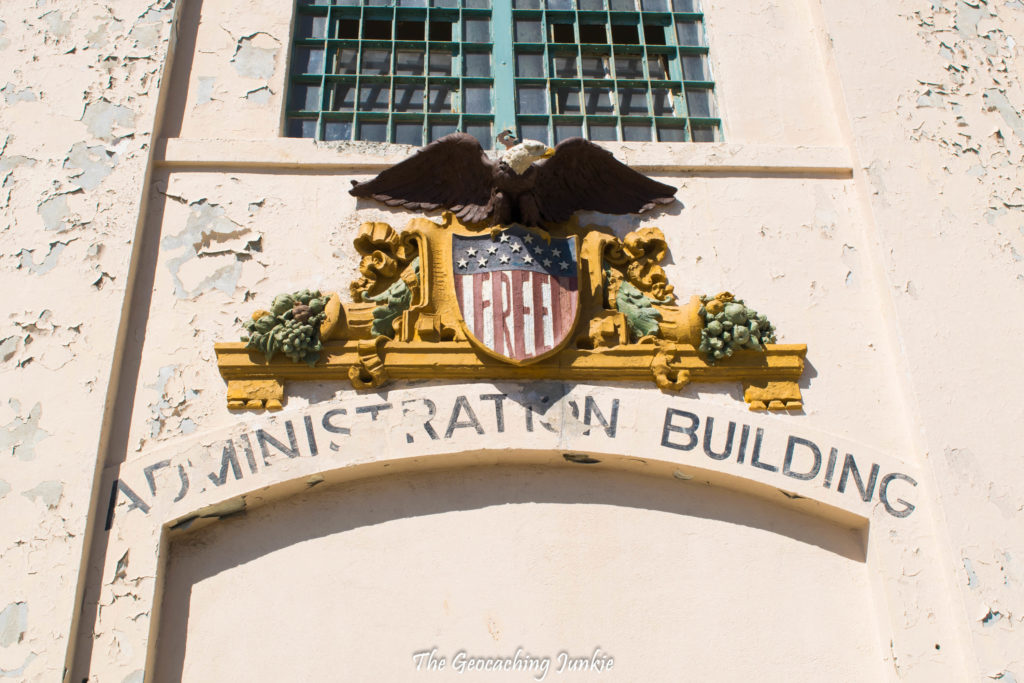 As I mentioned, if you do decide to visit, make sure to book your tickets well in advance. Even outside of peak season, tickets can sell out and you may not get the time slot you want. Also, keep in mind that there is nowhere to buy food on the island, so take along a packed lunch or eat before you go.