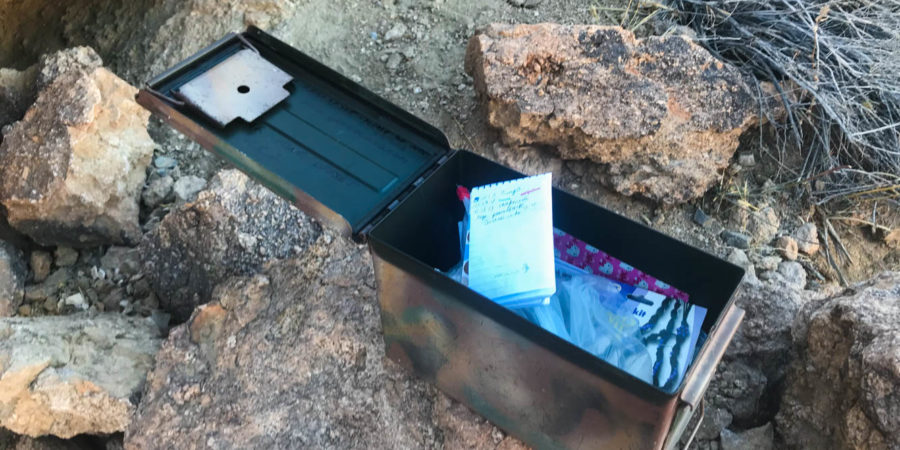 When we travelled to the US in October, I had big plans to collect three specific caches to inch ever closer to completing the elusive Jasmer grid. My research revealed that we would be near three of the four remaining months I needed: January 2001, March 2001 and November 2000. That last one was particularly important, because it doesn’t exist in Europe.

Let’s back up a minute: whenever I mention the Jasmer Challenge on social media, a few people always ask what it is. Here’s a quick explainer. The challenge cache dates back to 2008 when jasmerb placed the first version in Northern California. The idea is to find at least one cache placed in each month since geocaching began. 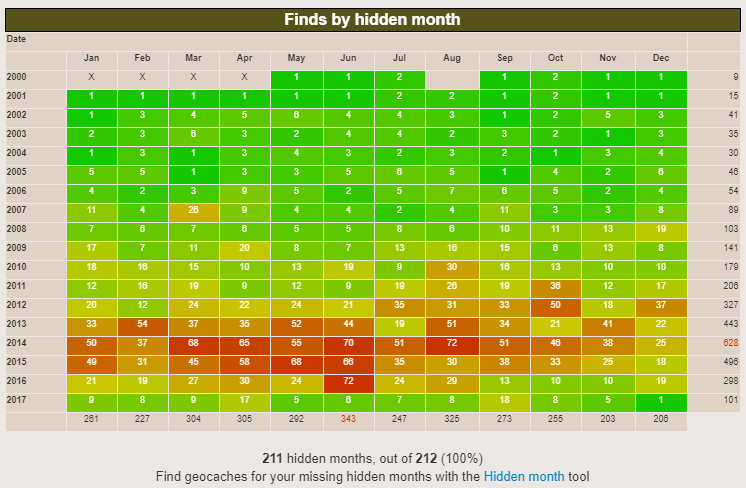 It’s a difficult challenge as it will involve travel. If you live in Europe, it’s impossible to complete it on your own continent. I now only have one month left to fill – August 2000 – and there is a single cache from that month in Europe: Match Stash near Stockholm in Sweden.

Thankfully, I found all three caches I had targeted. I had no intention of writing this blog post until I finished the Jasmer challenge, which I hope to do sometime during 2018 on an a trip to Sweden (which hasn’t even been booked yet!). However, that elusive November 2000 cache – the most important one as it can’t be found in Europe – ended up being one of the most memorable geocaching adventures I’ve ever had. So I figured it’s worth writing about.

Project-GC‘s ‘map hidden month‘ tool is an invaluable resource for planning Jasmer hunts. Since we would be visiting Washington and California, I searched both states. There were quite a few options for both 2001 caches. November 2000 was a little more scarce, with just three options:

Azucar Mine Offset, GCC2, in California

Monte Cristo looked the most enticing – a hike to an old mining town – but with a day of our Seattle itinerary already taken up with the A.P.E. cache, we couldn’t fit it in. Orange County Stash (V3.0) looked like a significant hike that we probably weren’t properly equipped to undertake. So that left Azucar Mine Offset, which unfortunately was a mystery cache that had me scratching my head. As luck would have it – somewhat amazingly – I had a scroll through previous finders and I knew two of them! I got invaluable help from IrishCubsFan and steben6, and the cache maintainers, NF5, confirmed I was on the right track (huge thanks to all these helpful cachers!).

I closely inspected lots of found it logs and photos and despite the cache description saying,

You can get petty (sic) close to the site on the unpaved road, then hike in (about 1 mile)…

… it looked like almost all recent finders had driven to the coordinates. That seemed simple enough, no big deal.

The day after Geocoinfest in Long Beach, we were supposed to be heading to Santa Monica for the last few days of our trip. The muggle was aware of this cache and I mentioned it in passing, but honestly, it was a significant drive in entirely the wrong direction and I wasn’t sure if he’d be game. Being the ever supportive husband that he is and understanding the difficulty of the Jasmer Challenge (not that I talk about it much – ahem), he agreed. I’m not sure that he would have agreed so willingly had I read him the warning on the cache page:

WARNING! DANGER! THERE ARE OPEN, UNMARKED MINE SHAFTS AND THE POSSIBILITY OF SNAKES AND OTHER DANGEROUS ANIMALS AND/OR INSECTS IN THE AREA … WHENEVER YOU GEOCACHE ENSURE THAT SOMEONE KNOWS YOUR ITINERARY AND WHO TO CALL SHOULD YOU NOT RETURN ON TIME.

Moving on … it took over 2 hours to get from Long Beach to the highway exit closest to the cache. A few minutes later, we found ourselves driving along a dirt road. I was a bit apprehensive at this stage but the Dodge Dart we had rented was making light work of the journey. 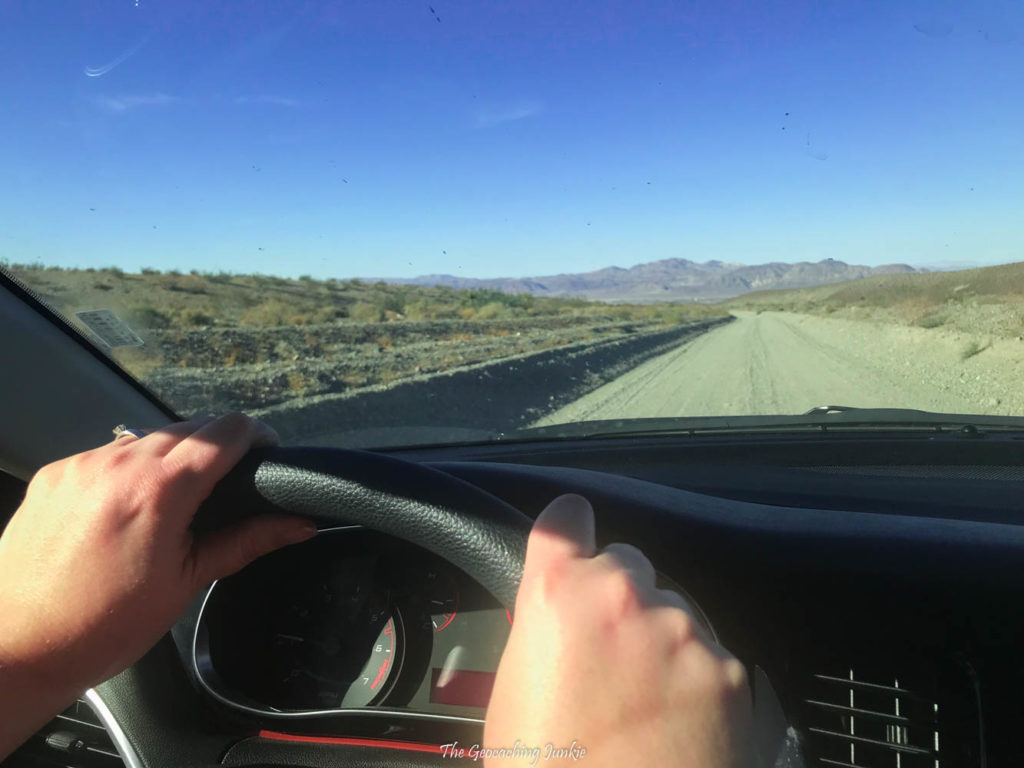 After another few minutes, we needed to turn off the unpaved road. It quickly became clear that the ‘dirt road’ we just left, was a main road compared to what we were now driving on. I guess that’s why the cache page says you should hike in from there. I suddenly developed a knot in my stomach. Our compact rental car getting stuck in the sand in the middle of nowhere – how would we explain that to the car rental company?

For now, it was coping well so we drove very slowly onward, until we heard – and felt – an ear-splitting scrape. What was that?! My knee-jerk reaction was to swiftly reverse. Another gut-wrenching scrape. We both quickly exited the car and saw what had caused the screech: rocks in the middle of the makeshift track. The car seemed to still be working okay – obviously we couldn’t see the underside of it and it was almost certainly scratched, but it was still operating as it should, which was a relief. 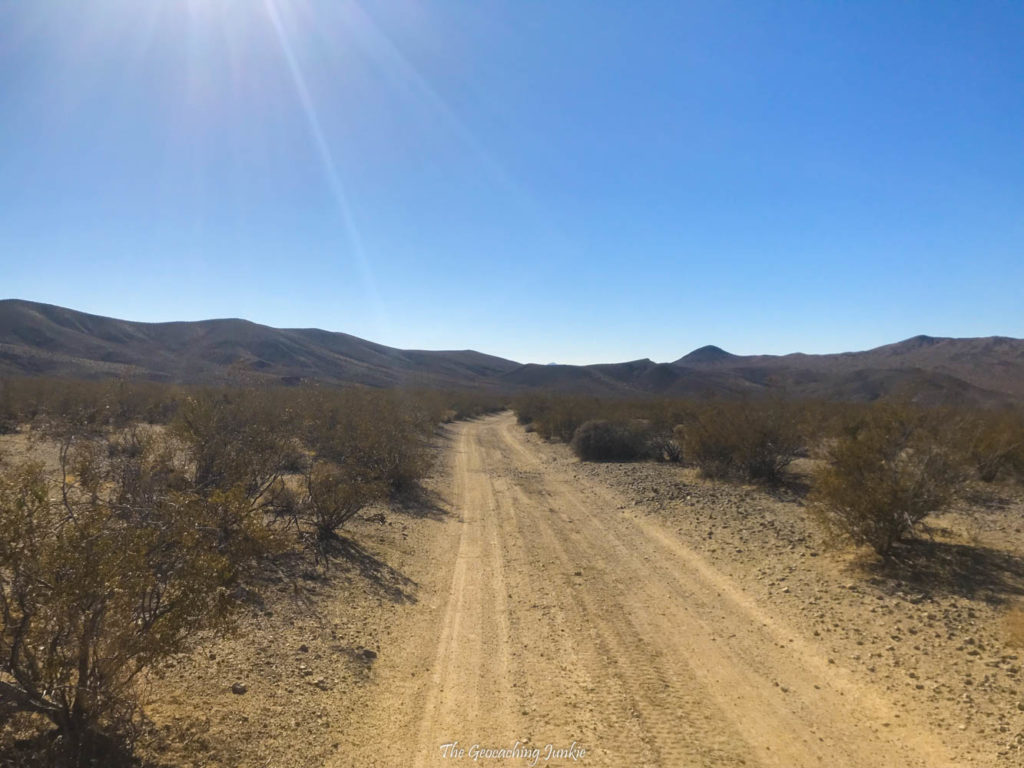 At this point, I expected the muggle to suggest turning around but he was keen to keep going since we’d come this far. I didn’t want to risk damaging the car (further), and since we were about 1.5 kilometres from the cache, I suggested walking. 1.5 km is not a big deal to walk in Ireland, but in the Southern Californian sun it was a different story. We got very hot, very quickly, but that was soon to be the least of our worries.

Did you see that?!

We were about 500 metres in to our brisk walk when I saw something move and whipped my head to the right. Did you see that?! He hadn’t seen anything, but I definitely had. Something four-legged and furry walking quickly away from us. He suggested maybe it was a plant. I replied that I’d never seen a plant that looked quite so canine. He asked what I thought it might be. Only one word jumped in to my mind: Coyote. 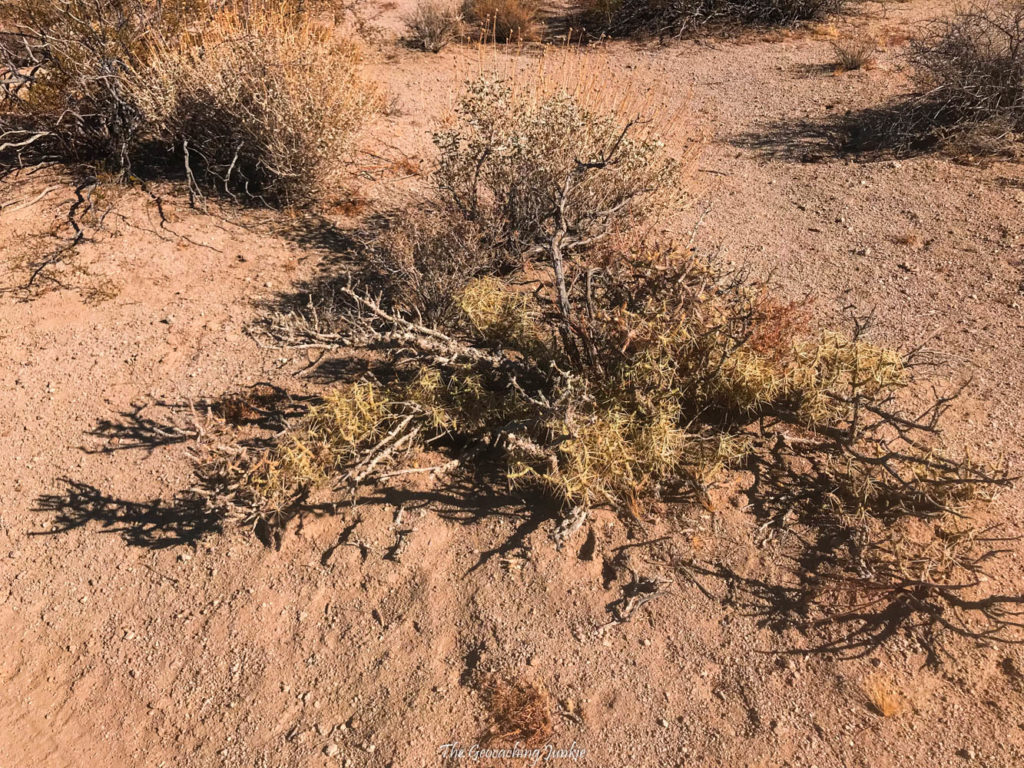 I can’t say for sure if it was. It could have been a large, oddly-coloured fox or someone’s escaped dog for all I know, but needless to say, after I uttered that word, there was no need for further discussion: we were hastily walking (but not running) back to the car. That is probably the fastest I’ve ever walked anywhere. Ever. Once we were safely ensconced in the car, we sat in silence for a few moments. I waited for the suggestion to turn around. It never came.

Instead, the muggle suggested maybe if I position one of the wheels of the car directly over the rocks, I might make it without doing any more damage. I wasn’t convinced, but he seemed to be. The line between crazy geocacher and sensible muggle was becoming ever more blurred. 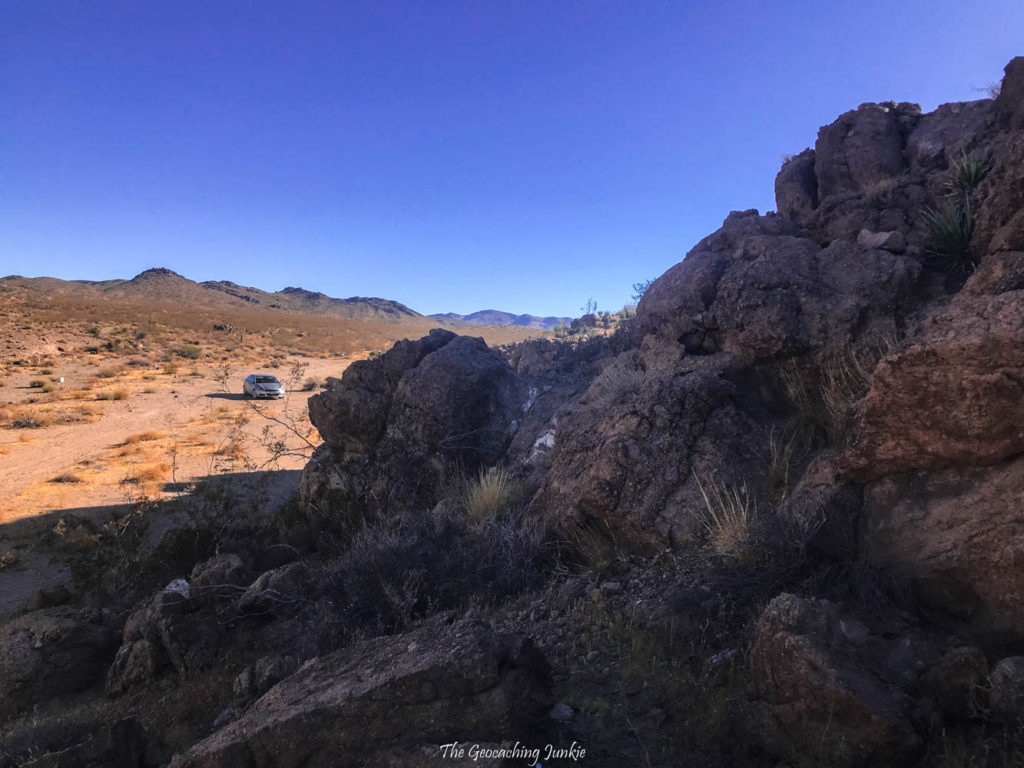 Shaking, I went for it and after a few nerve-racking minutes, we had reached an open area and were as close to the cache as the car could get. A brief climb up to GZ ensued and while I searched in the wrong spot, the muggle found the cache. My hero.

After I signed the log, I hastily took a few photos with my phone and returned the cache. I just wanted to get the heck out of there as soon as possible. 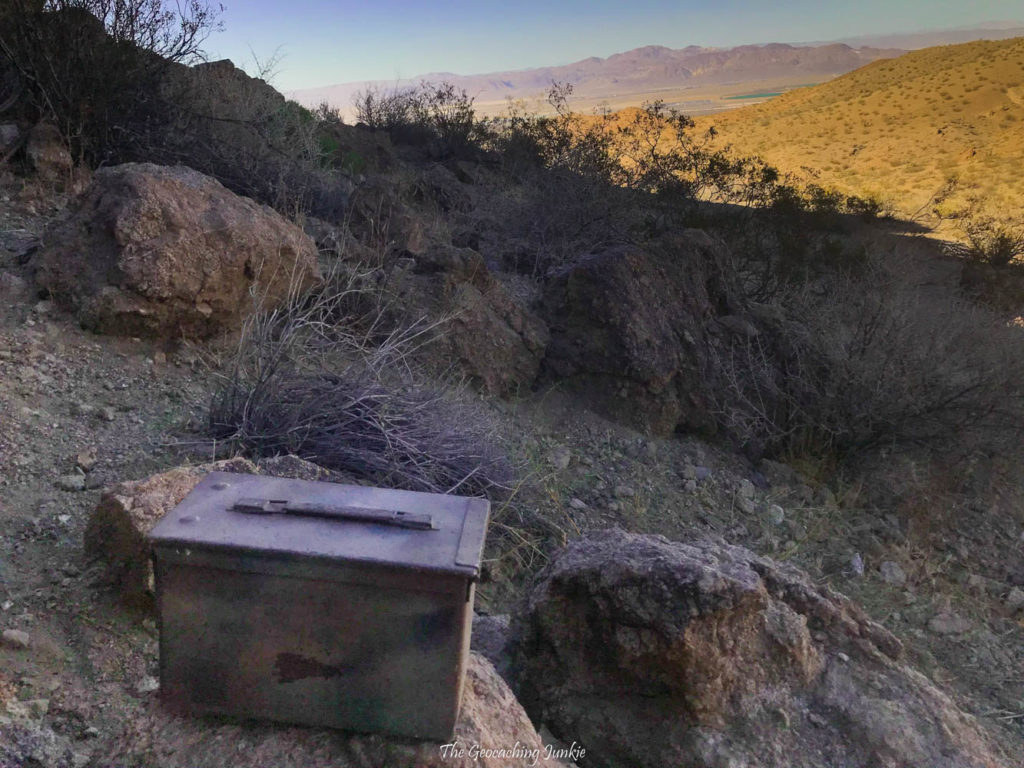 My nerves didn’t really settle down until we were back on the paved road. When I look back on it now, I fully accept how ridiculous it was. I’m sure if we had a 4×4 vehicle, we would have just breezed on down that track without any issue. Despite our brush with the wildlife – whatever it may have been – I am very grateful that we didn’t see any snakes or spiders! 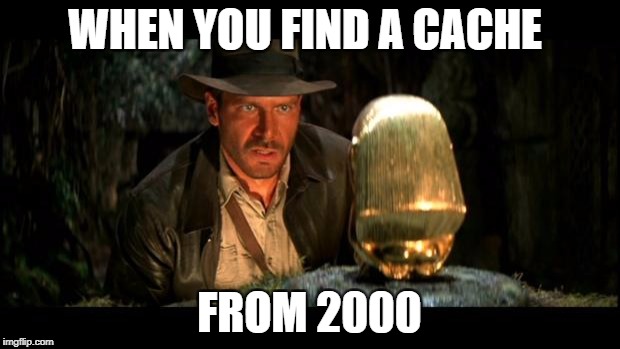 Looking back, I have undoubtedly done some crazy – and arguably quite stupid – things in pursuit of a cache. But I guess those ridiculous things make the best stories!

What’s the craziest geocaching adventure you’ve ever been on?