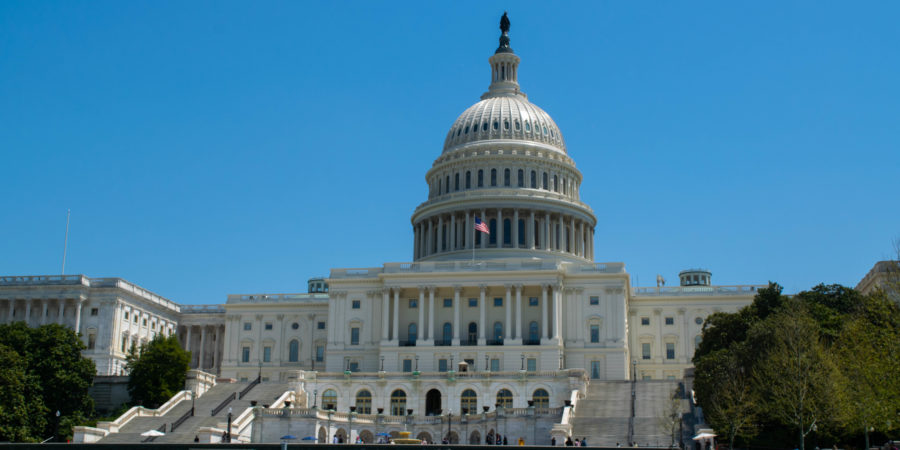 After unexpectedly spending an entire day at the Smithsonian National Zoo, we had one full day remaining in D.C. and lots left to do and see! We had one appointment set for the day and that was a tour of the Capitol Building. We started the day with three great geocaches on our way to the metro station. Scott Circle Webcam (GCN21R) was our first stop and only a few hundred metres from our hotel – a rare webcam cache is never to be passed up when it’s so nearby! The other two finds were clever traditionals and a change from the many virtual caches were were about to find – D.C. is covered in them! 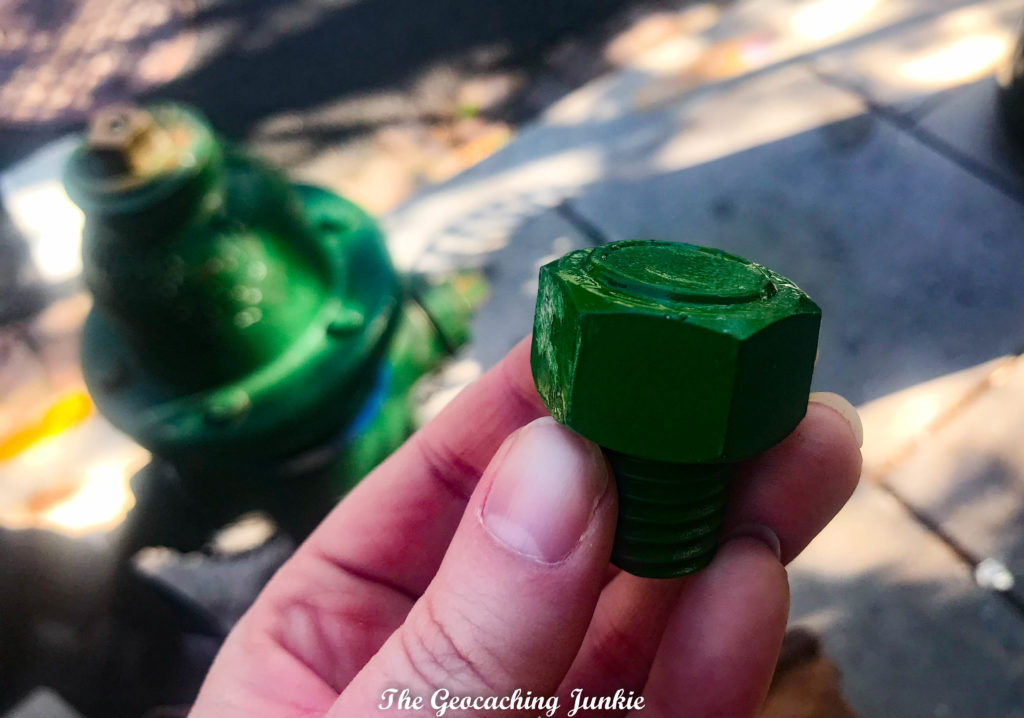 The muggle booked our free tour of the Capitol Building online months before we went. When we arrived, it turned out that we didn’t need to book: we had arrived in advance for our scheduled time slot but were able to move to an earlier tour as it wasn’t full. I would recommend booking in advance to avoid disappointment, but multiple large tours happen at the same time so it’s likely just walking up on the day will do the trick. 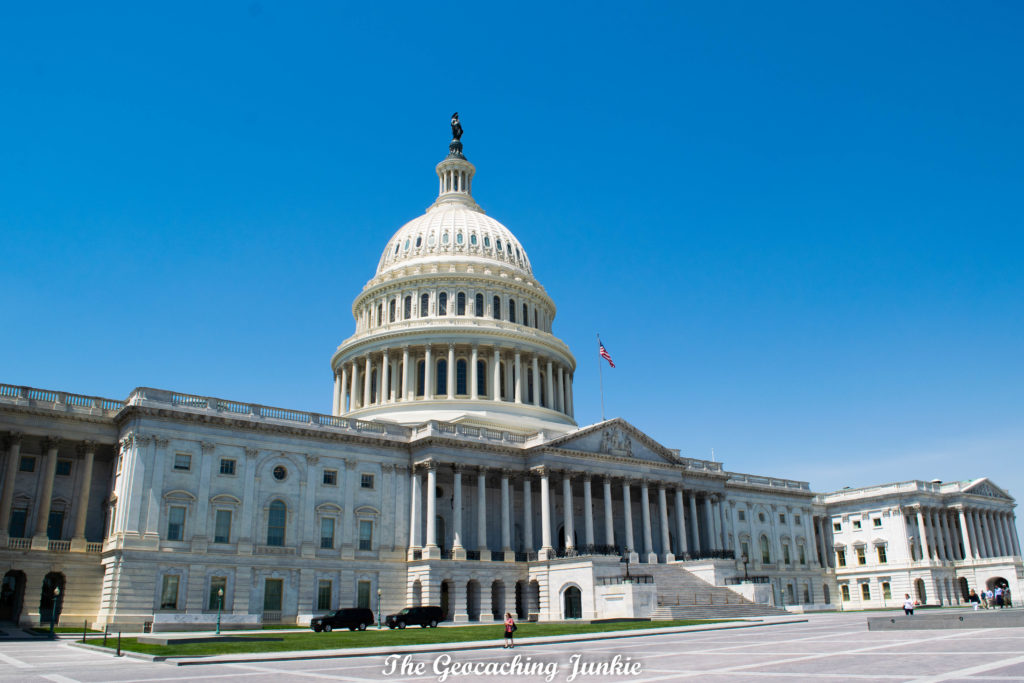 The guided tour lasted 45 minutes and was mostly a few small tourist groups like us, with two large school groups. The tour starts with an orientation film, entitled Out of Many, One. It’s an interesting, albeit brief, look at how the 50 states come together to govern on Capitol Hill. There are only a handful of rooms visited on the tour, including the famous dome, with its impressive sculptures and ceiling artworks. 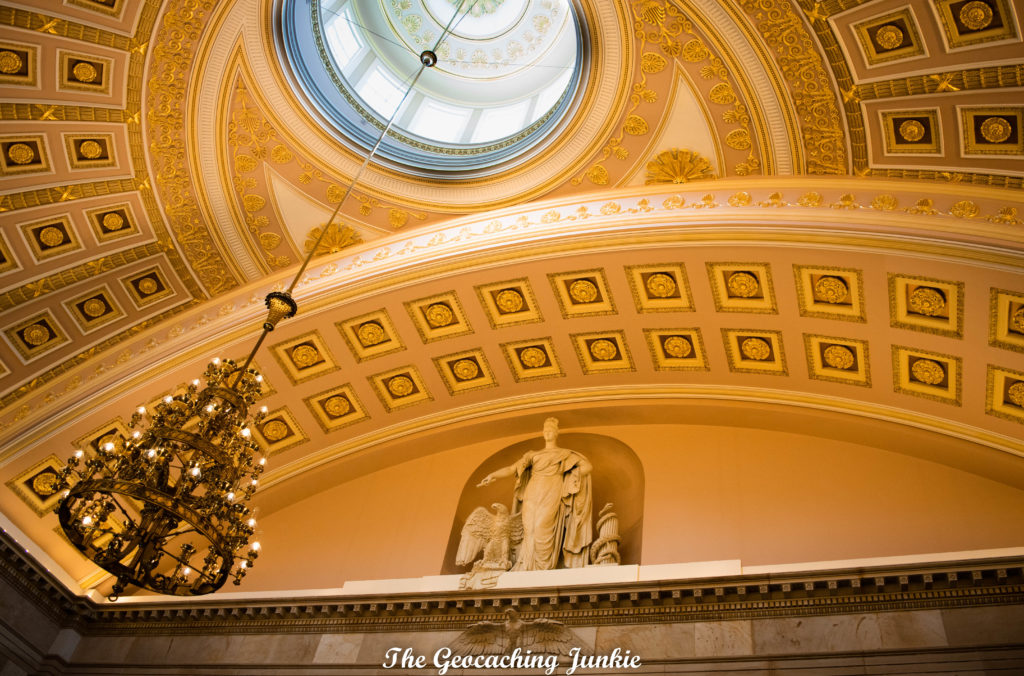 At the end of the tour, our guide informed us that we could request tickets to visit the Senate or the House of Representatives from the House and Senate Appointment Desks*. We couldn’t let the opportunity pass! We chose to see the Senate (although we could have seen both if we had time) and once we provided I.D., we were given tickets to visit the famous room. Congress were not in session at that time but it was fascinating to sit in the room – it’s much smaller than I expected. Unfortunately, we were not allowed to take any photographs inside. 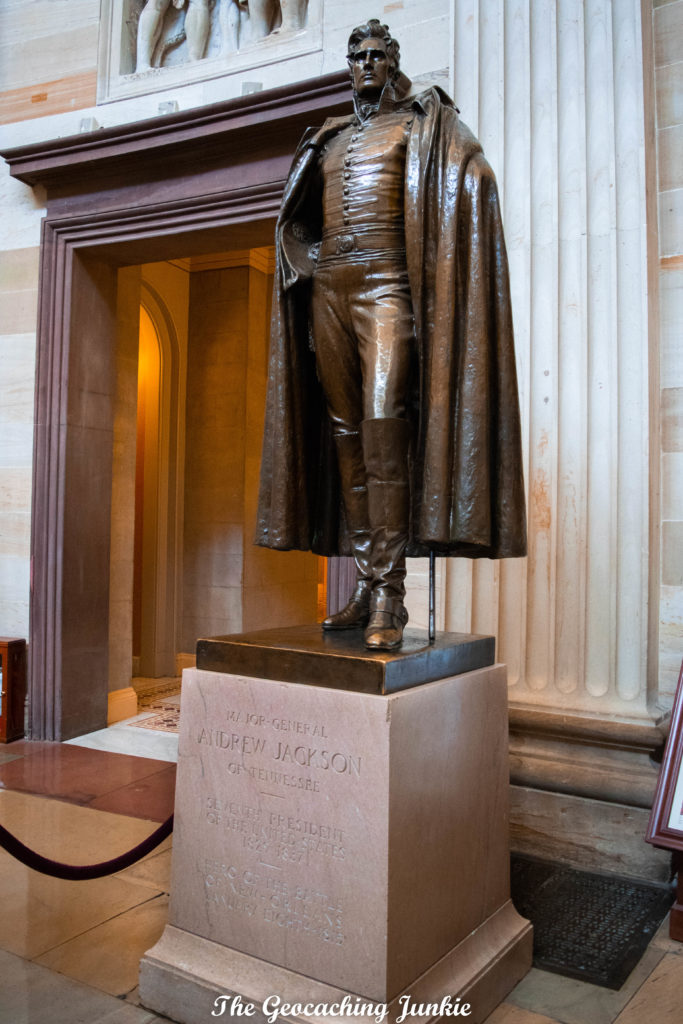 *The House and Senate Appointment Desks provides tickets for international visitors. US visitors must request tickets from the offices of their Senators or Representatives (also located in the Capitol Building). 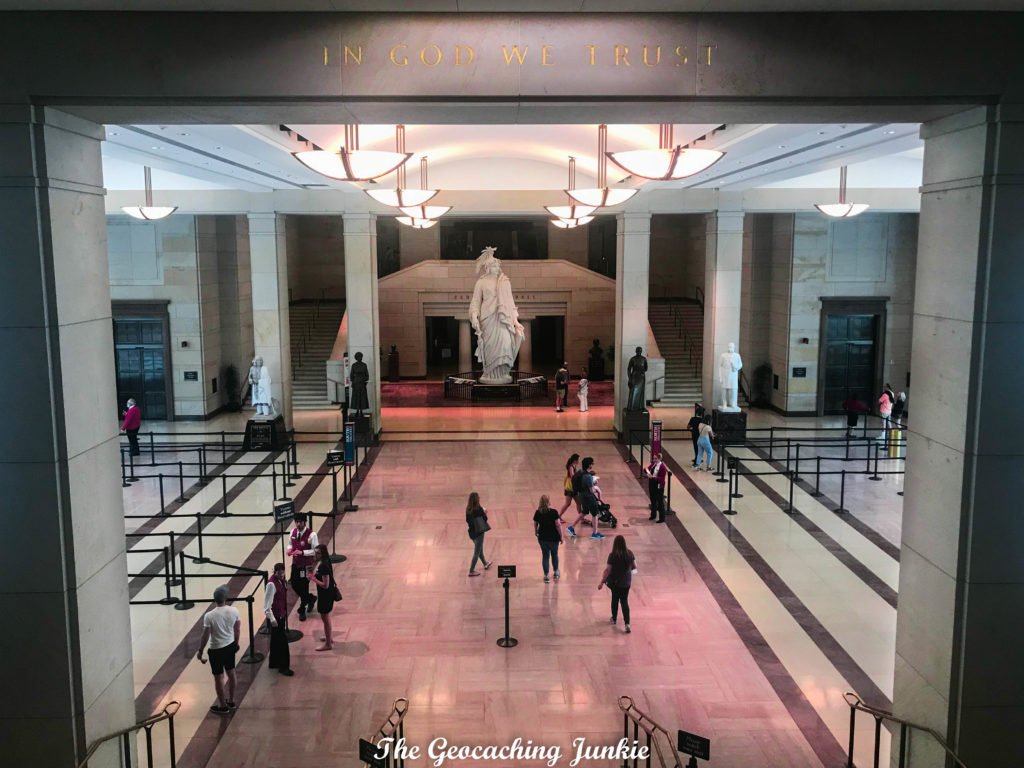 D.C.’s famous National Mall is home to 11 Smithsonian Museums, as well as other free attractions like the National Gallery and the U.S. Botanic Gardens. Since we had spent so much time at the Smithsonian Zoo the day before, we only had time to visit a small fraction of the museums on offer. 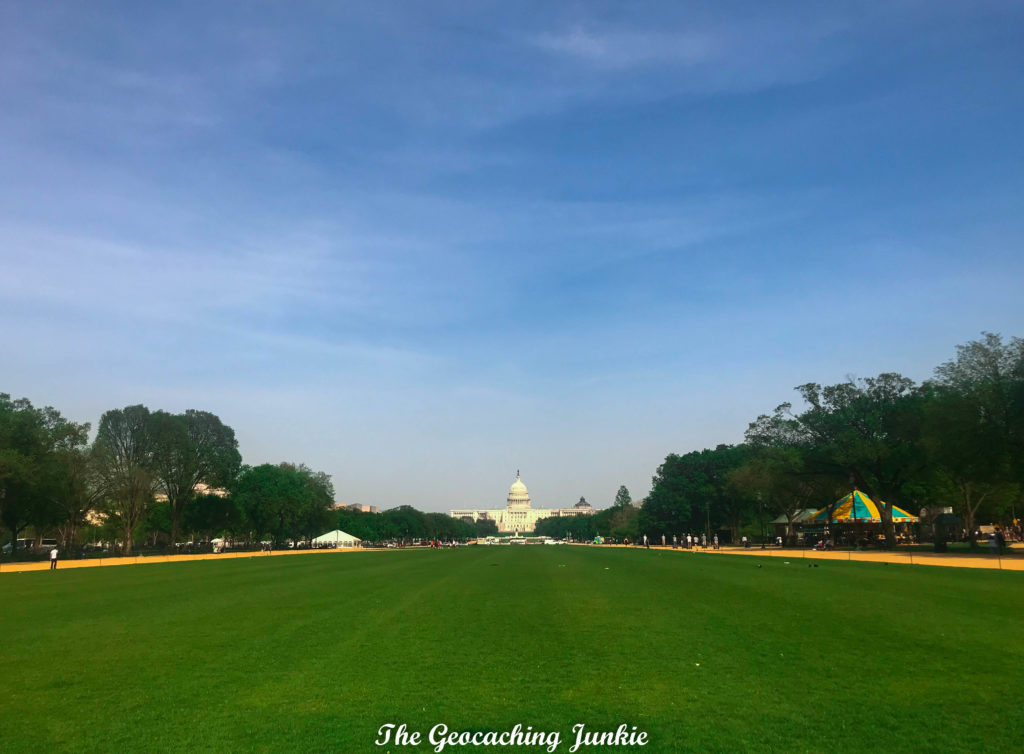 The museum top of our list was the National Air and Space. After a quick stop at the virtual cache, Pointing Skyward (GCBB5C), we made our way through the security checks and in to the vast entry hall, called the Boeing Milestones of Flight Hall. In 2016, the museum was the most visited in the world, with approximately 7.5 million visitors! 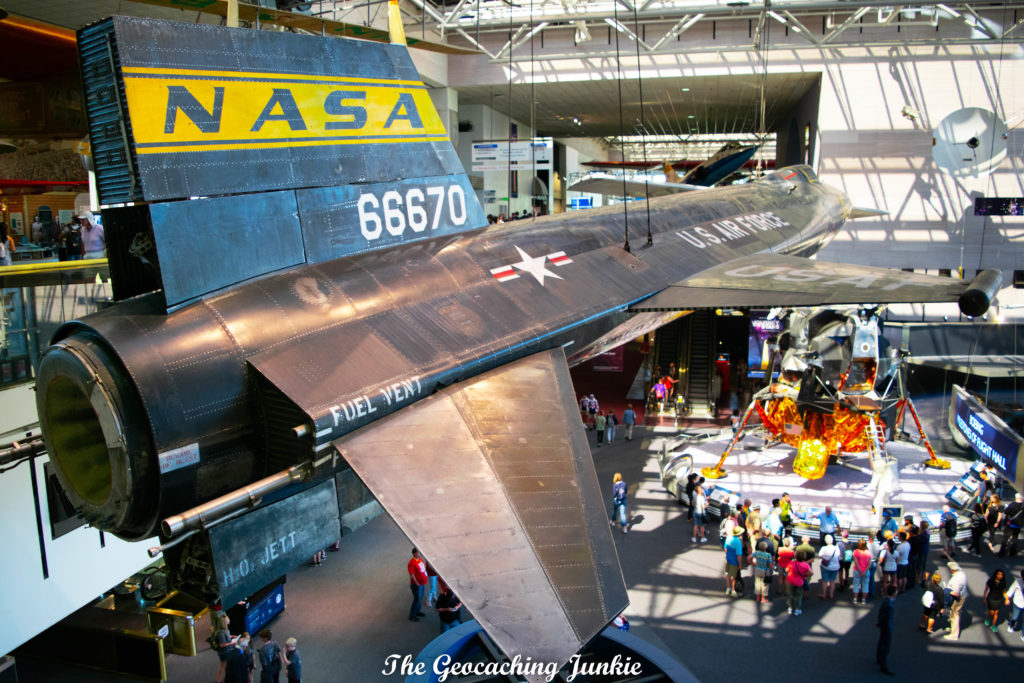 There are lots of amazing artefacts on display, ranging in size from a toothbrush that belonged to Astronaut Michael Collins during his trip to the moon on Apollo 11 in 1969, to a U.S. Air Force X-15 fighter jet (pictured above). 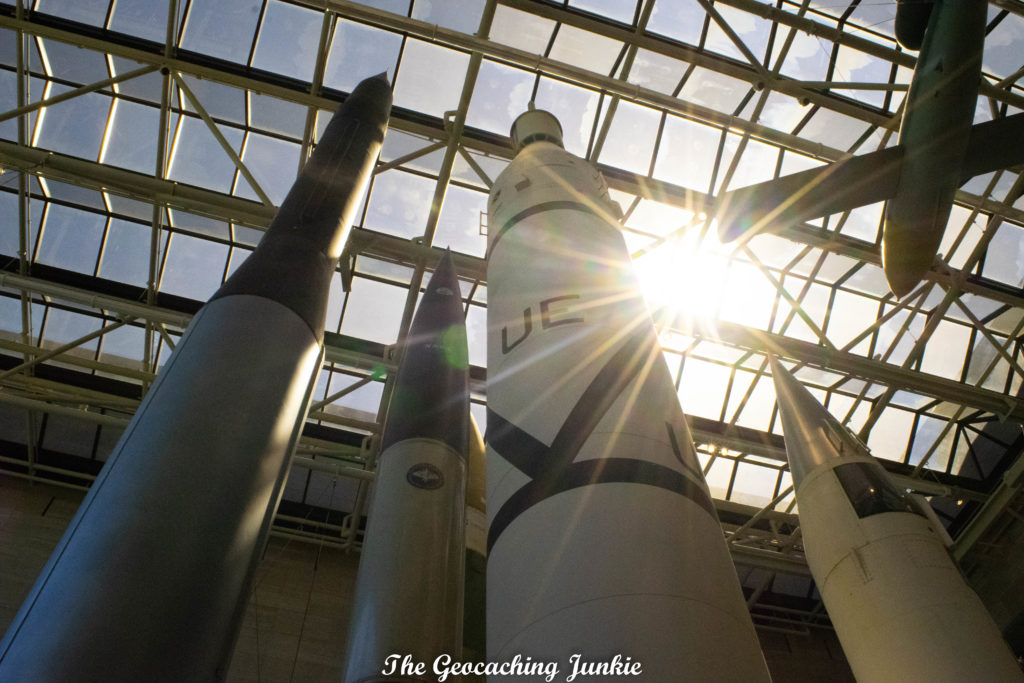 Our next must-visit spot was the National Museum of Natural History, as featured in the Ben Stiller flick Night at the Museum 2 (although a lot of scenes for the movie were actually shot in Canada). The building is Neoclassical in style and its many balconies provide a stunning backdrop to a variety of exhibits including the insect zoo and the hall of bones. 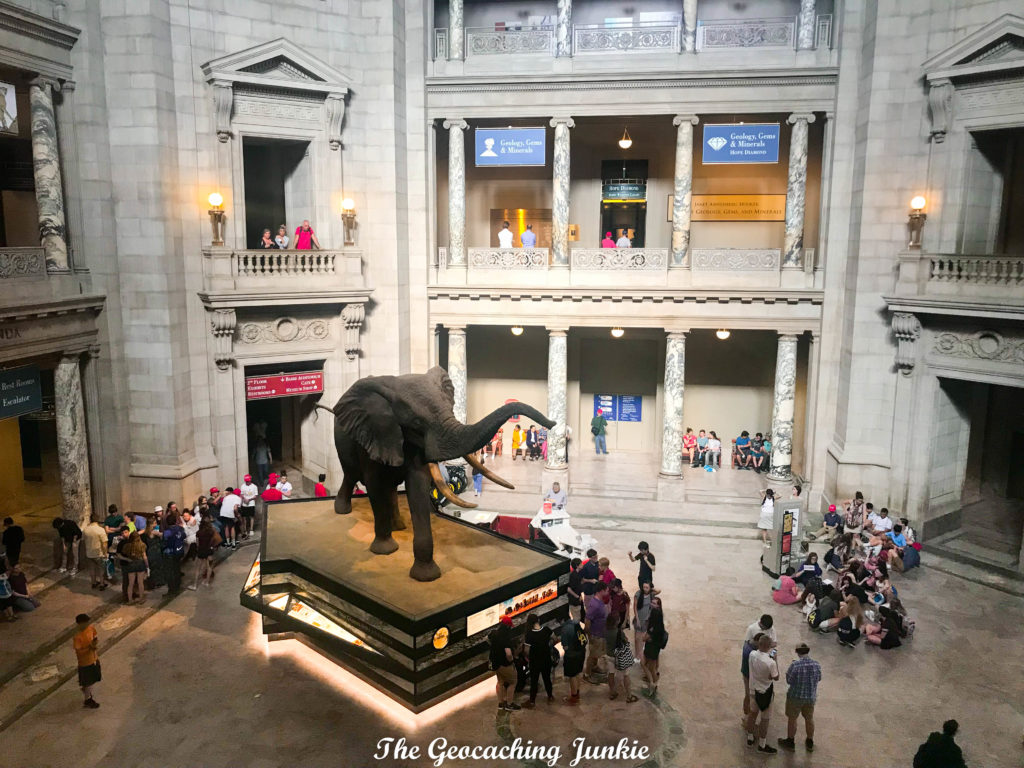 We were unfortunately too late to visit the butterfly dome, but we did get to pet a stick insect in the insect zoo! I had to be careful walking through there – the muggle was sent ahead to inspect all glass cabinets before I did, in case I’d accidentally eyeball a terrifying arachnid! 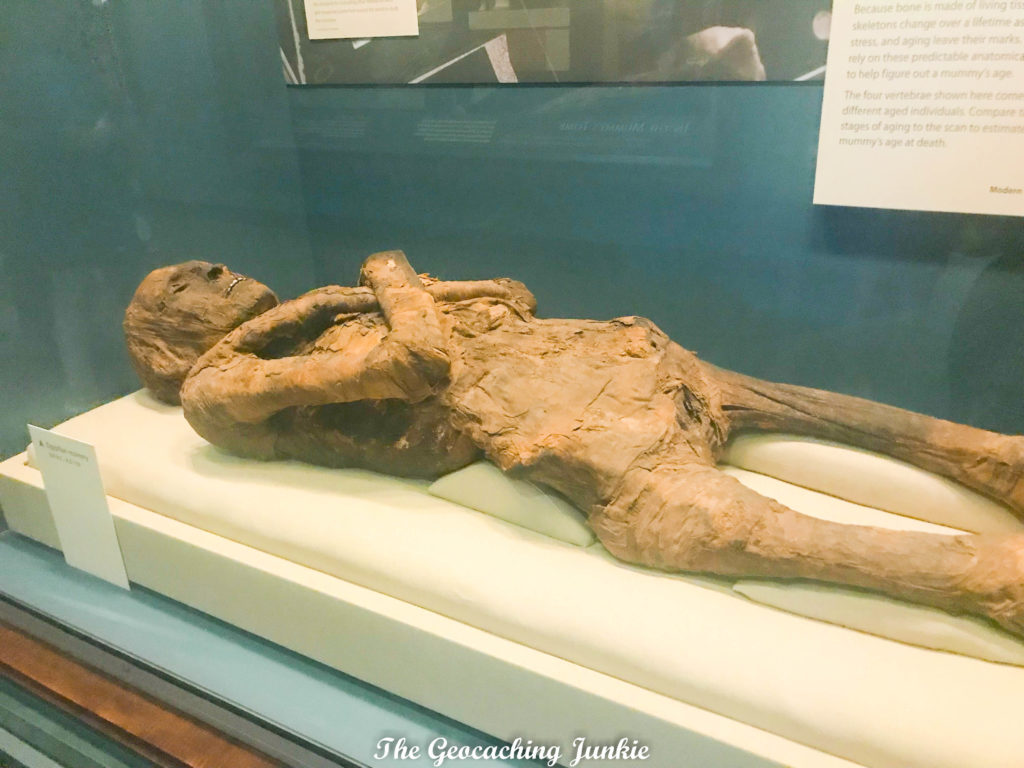 After our visit to the Natural History Museum, I was eager to look for the nearby traditional cache, Elm Tree 1 (GC3QMEP), which at the time of writing has a whopping 616 favourite points. After a few minutes of wandering around GZ, my cacher senses kicked in and I spied the clever container – definitely worthy a visit, and a favourite point! 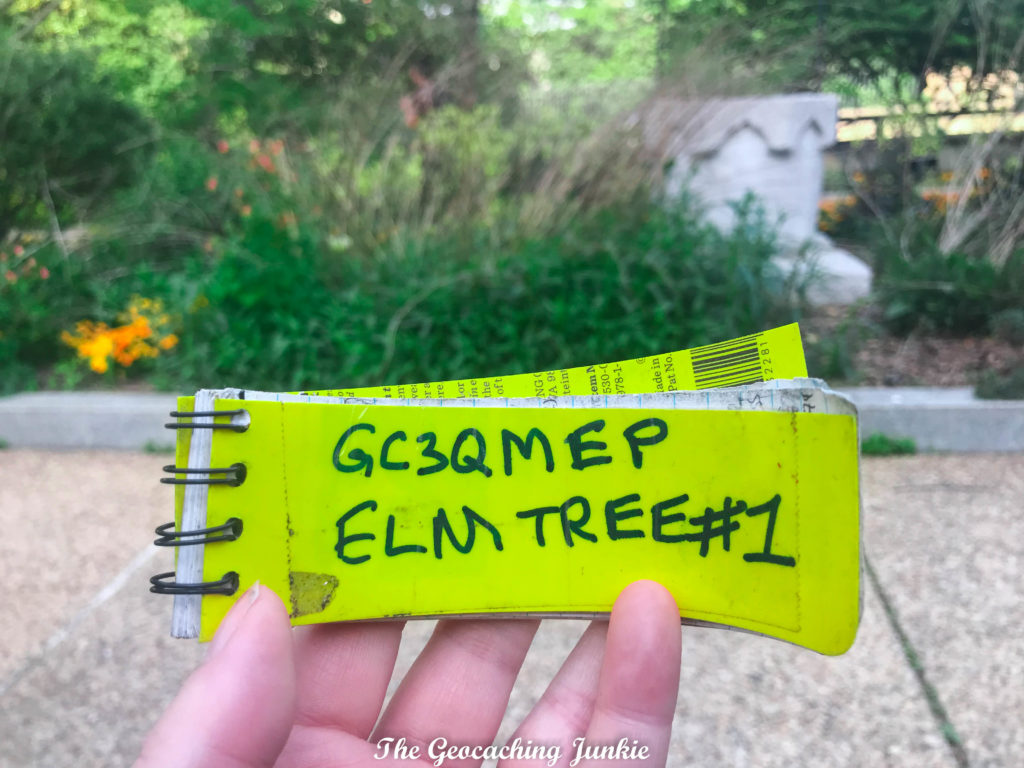 We still had more to see in D.C. before we left – my final blog post will be coming up soon!