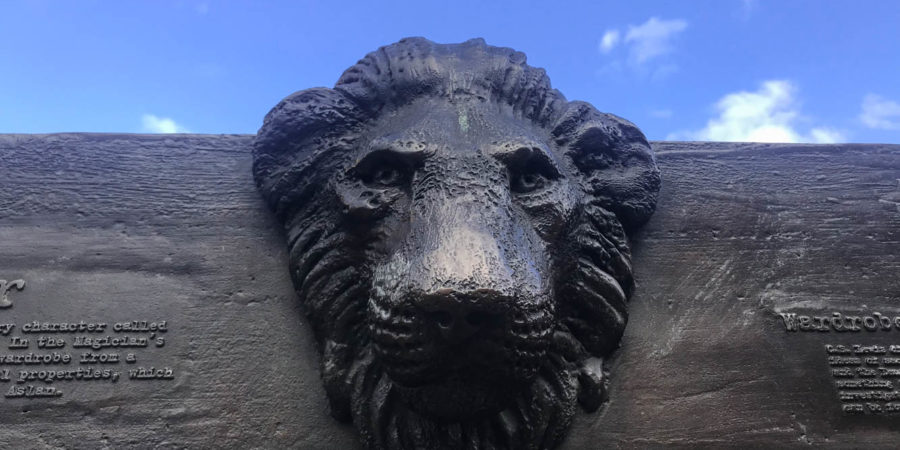 There are few books from my childhood that stick out in my memory. I spent hours getting lost in Enid Blyton’s Faraway Tree series and being equally enthralled and terrified reading Roald Dahl’s The Witches. My favourite stories by far, though, were The Chronicles of Narnia by C.S. Lewis. I must have read The Lion, the Witch and the Wardrobe at least five times, sometimes sneaking a torch under the duvet to carry on reading long after I should have been asleep. 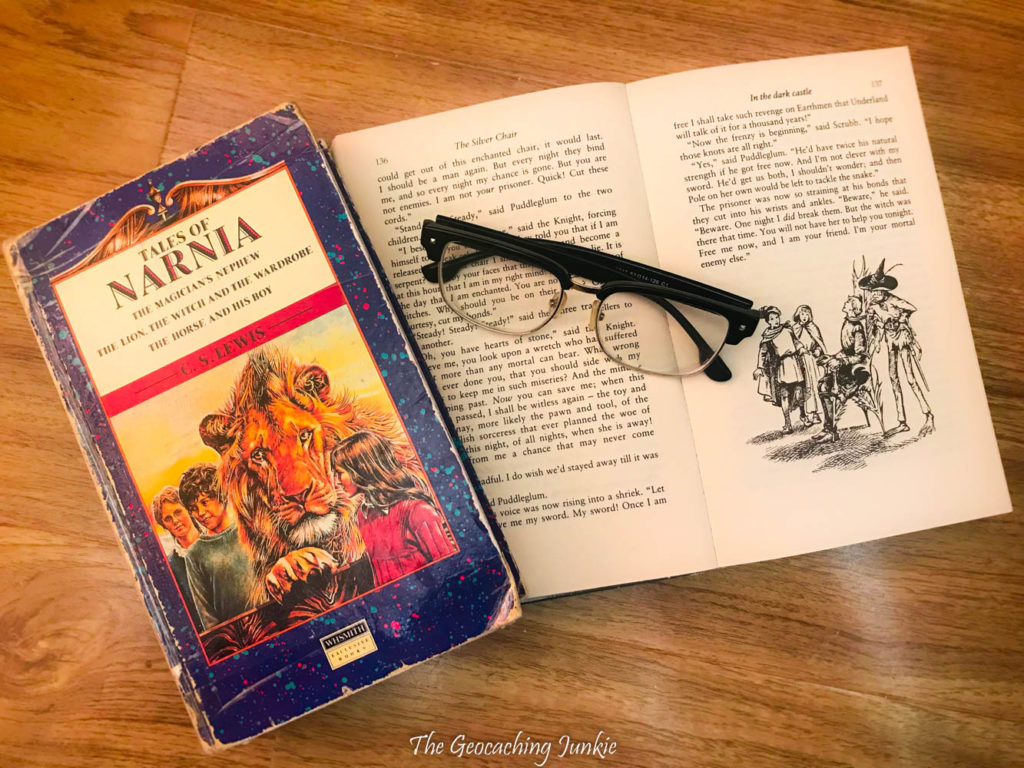 When I moved to Belfast in 2016, I had no idea that the author of those beloved stories from my childhood was born just a few miles away. It was geocaching that led me to this wonderful discovery, when I went to find the traditional cache The Searcher. The cache takes its name from the C.S. Lewis centenary sculpture by Northern Irish artist Ross Wilson. Based on the character Digory Kirke from The Magician’s Nephew, the sculpture features the famous wardrobe with magical properties. 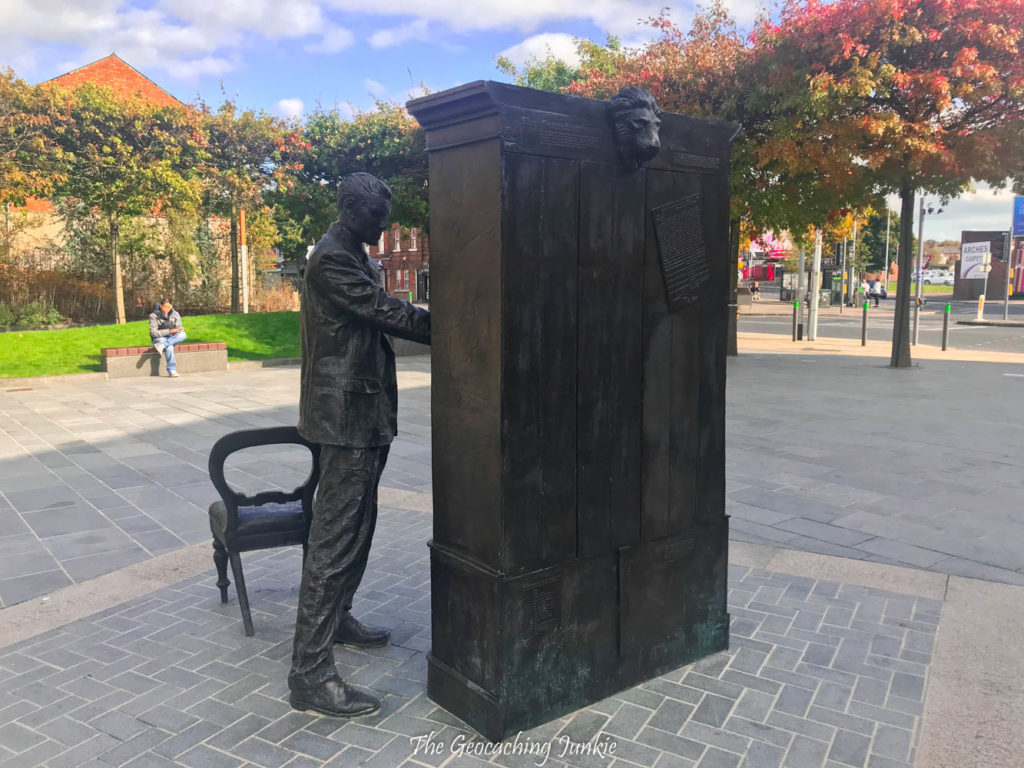 In 2016, The Searcher was joined by seven sculptures of characters from The Chronicles of Narnia. The artworks by Northern Irish sculptor Maurice Harron, are a focal point of C.S. Lewis Square, which is also home to the JACK Coffee Bar (the author was affectionately known as Jack to friends and family). 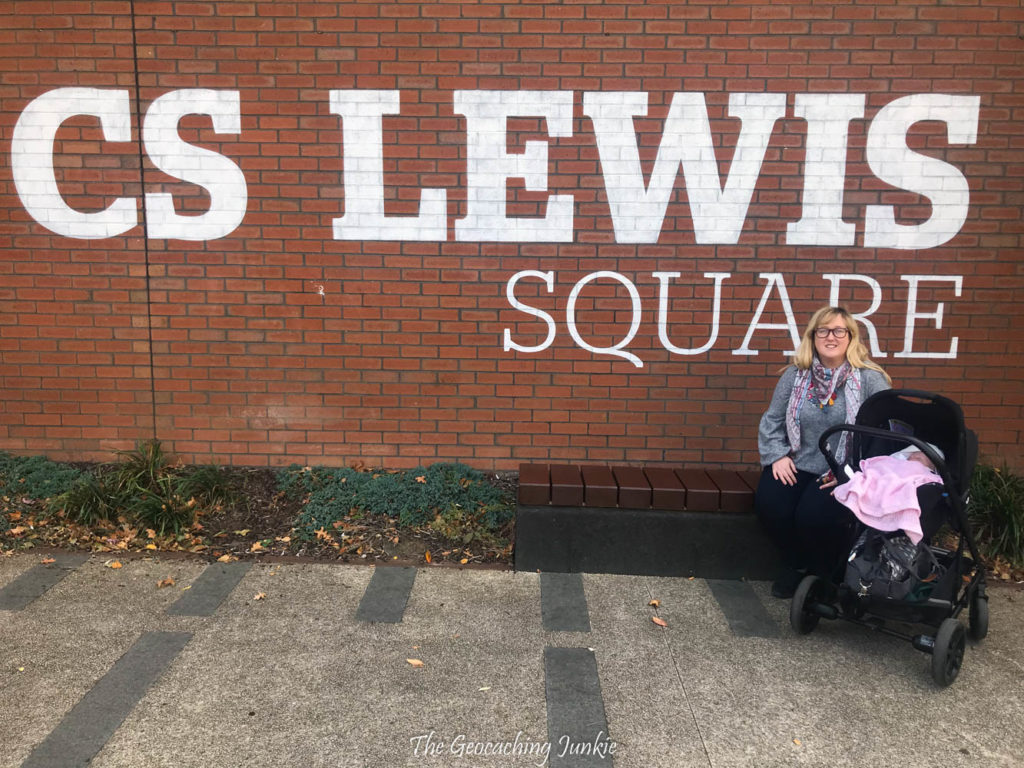 The bronze sculptures include the White Witch, Mr Tumnus and Aslan the Lion, and are illuminated at night (the square is a public space that can be accessed 24/7). We walked around the square on a sunny autumn afternoon, but I imagine seeing the sculptures lit up at night would be an entirely different experience (we’ll get there some evening soon hopefully!) 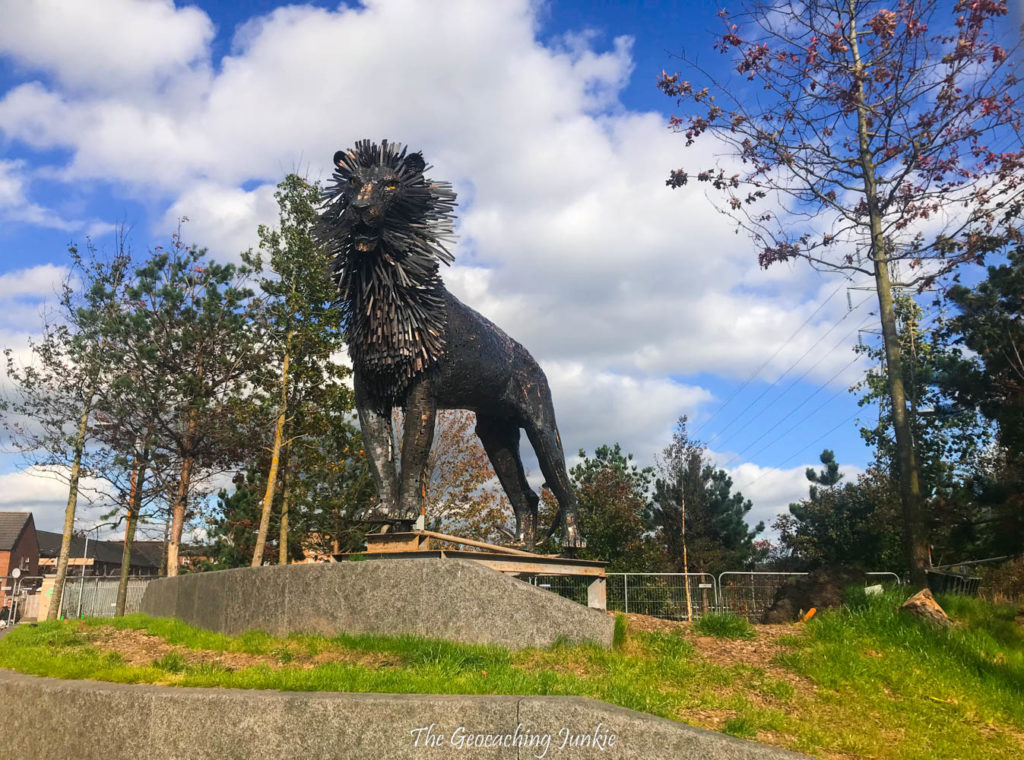 Discovering C.S. Lewis Square piqued my interest in the author and his history with the city, so I did a little research and the following week, went back to East Belfast to explore some more locations associated with the Narnia creator. 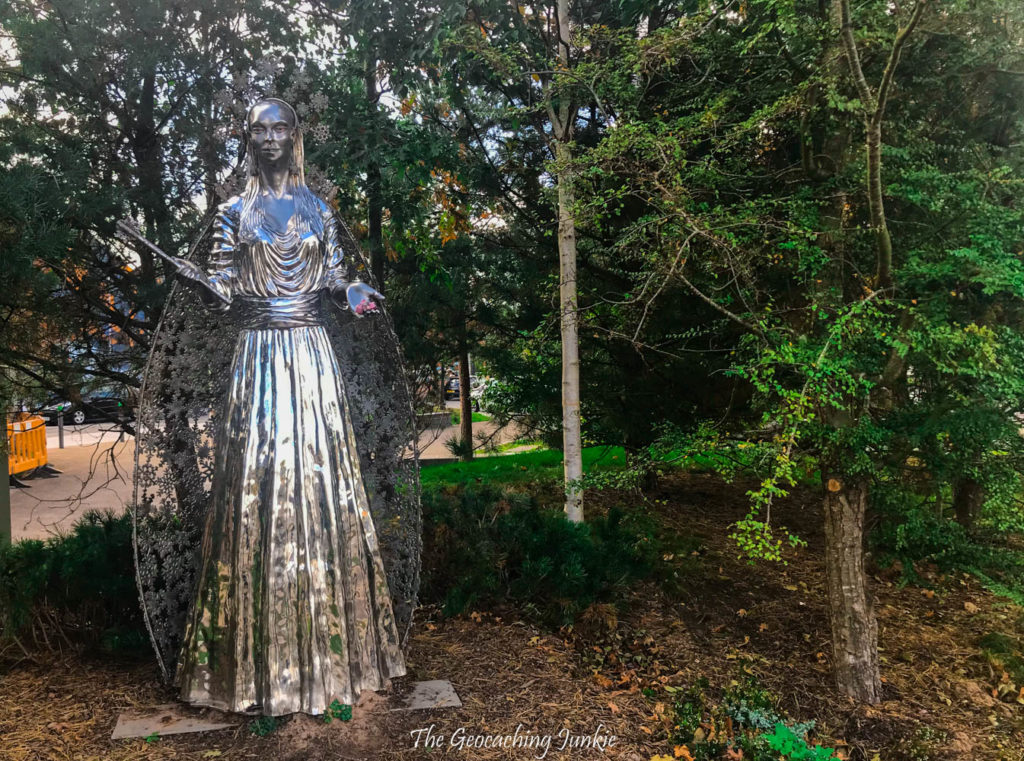 Lewis was born at 47 Dundela Avenue on 29th November 1898. The address was once a semi-detached house, but the land was sold and the two houses that stood there demolished in 1953 to make way for a block of flats, which are still there now. There is a blue plaque on the side of the flats referencing the author’s birthplace. 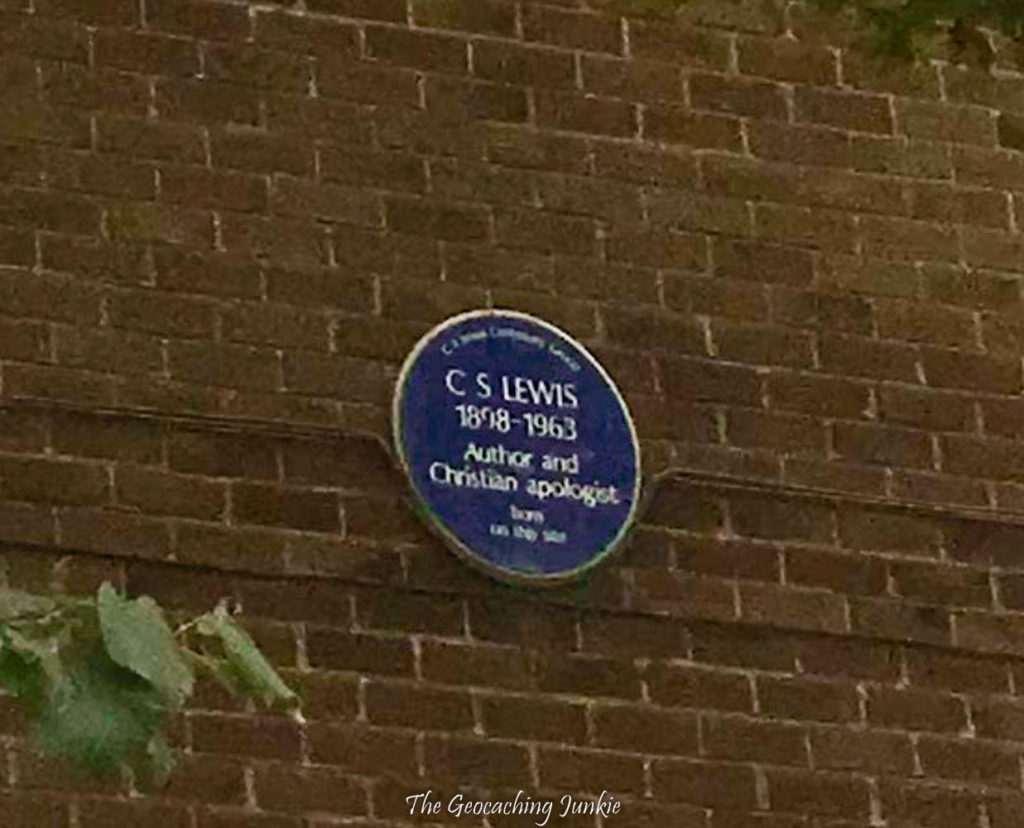 The Lewis family moved to a detached property at 76 Circular Road, which his father called Little Lea. The house remains and is still a private residence, behind wrought iron gates with two signs adorning the pillars: ‘private’ and ‘Little Lea’. Lewis wrote about the house and its influence in his partial autobiography Surprised by Joy:

The New House is almost a major character in my story. I am the product of long corridors, empty sunlit rooms, upstair indoor silences, attics explored in solitude, distant noises of gurgling cisterns and pipes, and the noise of wind under the tiles. Also, of endless books. 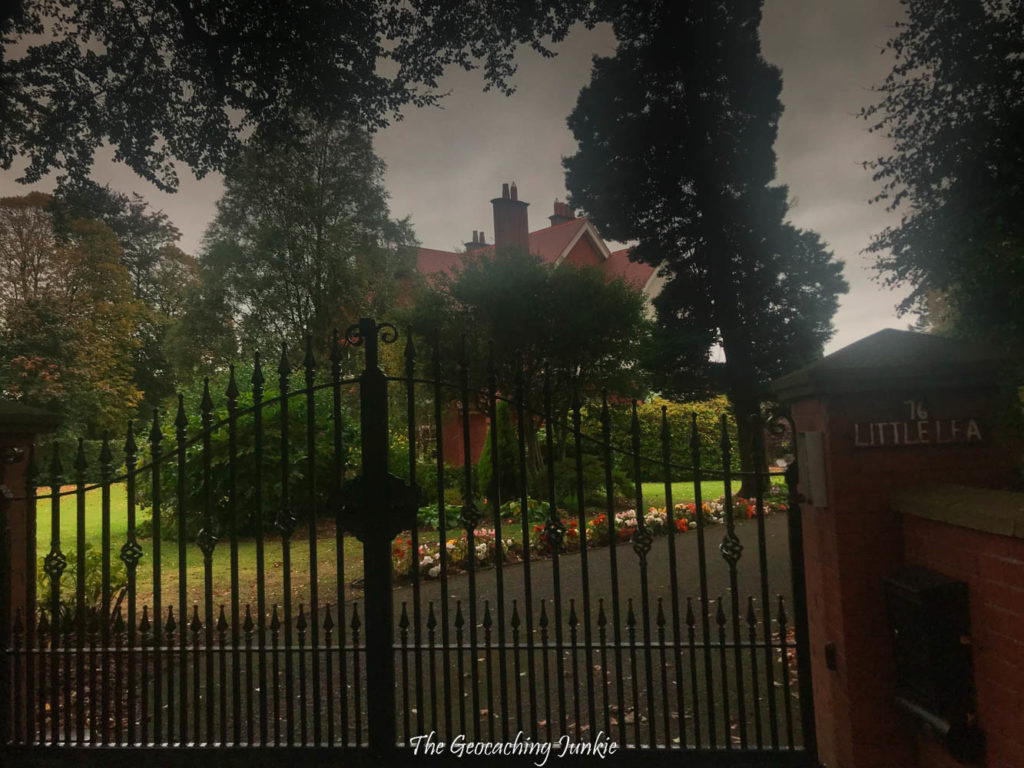 The author was baptised Clive Staples Lewis in St Mark’s Church Dundela on Holywood Road on 29th January 1899. The baptism was performed by Lewis’ grandfather, who was the first rector of the parish. The church wasn’t open when we visited however. It features a stained glass window, which was donated by the Lewis brothers in memory of their parents. The rectory’s front door features a lion’s head – an inspiration perhaps for the all-powerful Aslan? 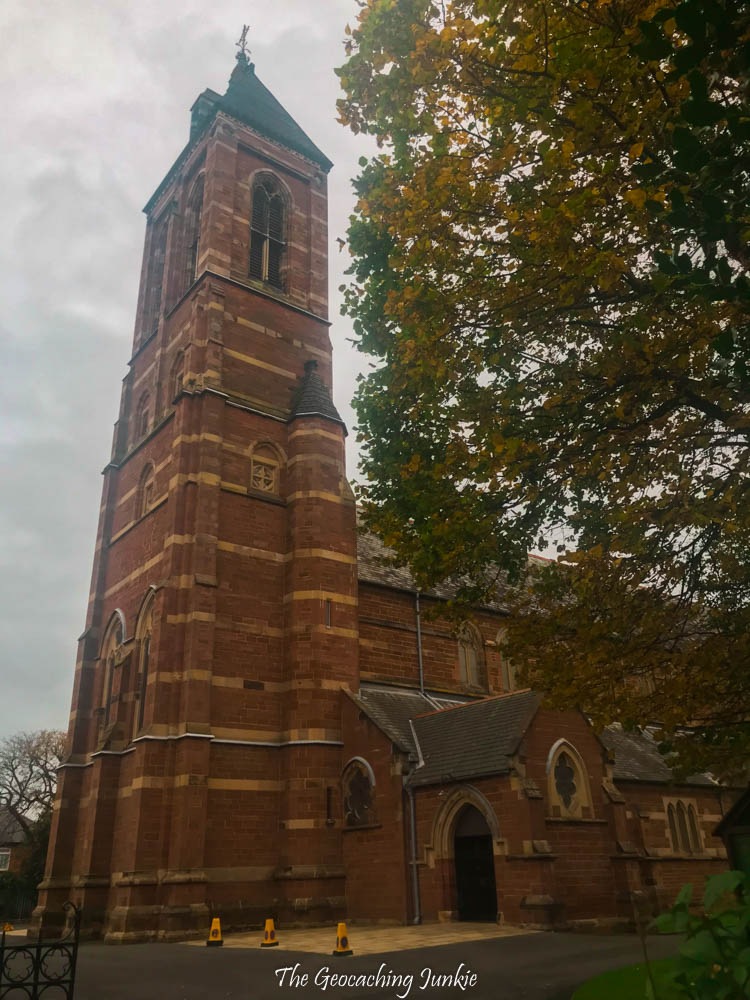 Among the many murals in Belfast, the east of the city is home to two must-see artworks dedicated to C.S. Lewis. Just off the Ballymacarrett Road, on Convention Court, is the fabulous The Lion, the Witch and the Wardrobe mural, which includes a likeness of the author himself, along with the famous wardrobe, the White Witch and Aslan the Lion. 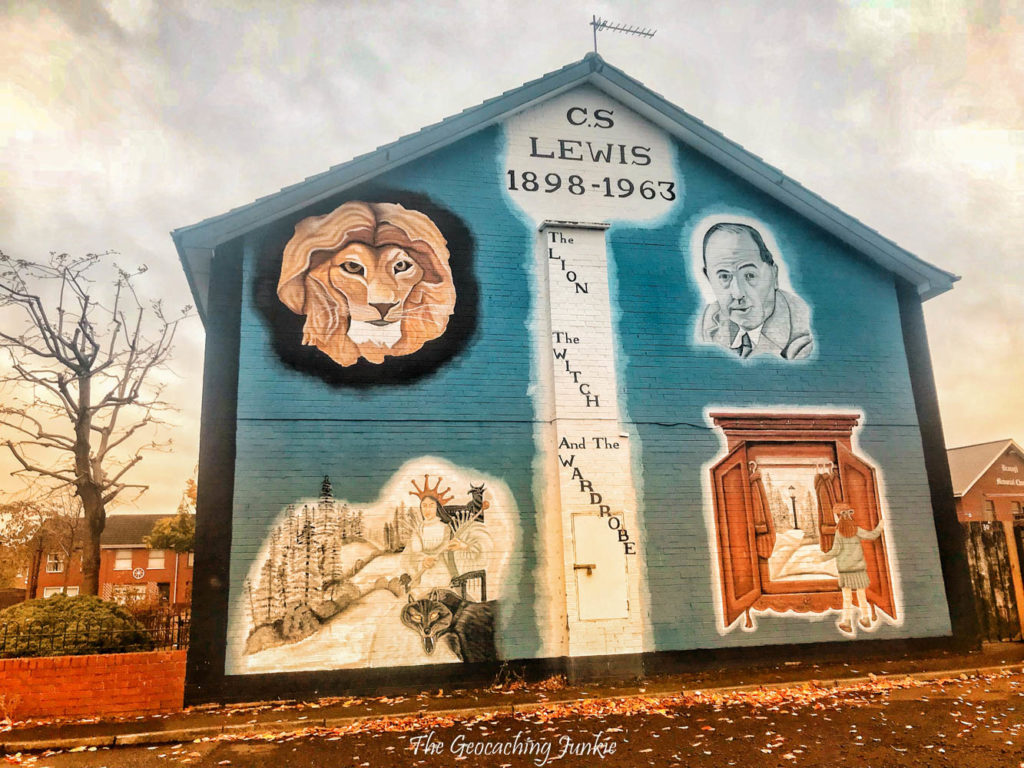 On the corner of Dee Street and Pansy Street, you’ll find a wall adorned with another image of the land of Narnia, along with the image of Lewis. Both murals are impressive and worth visiting, whether you’re a fan of the author or not. 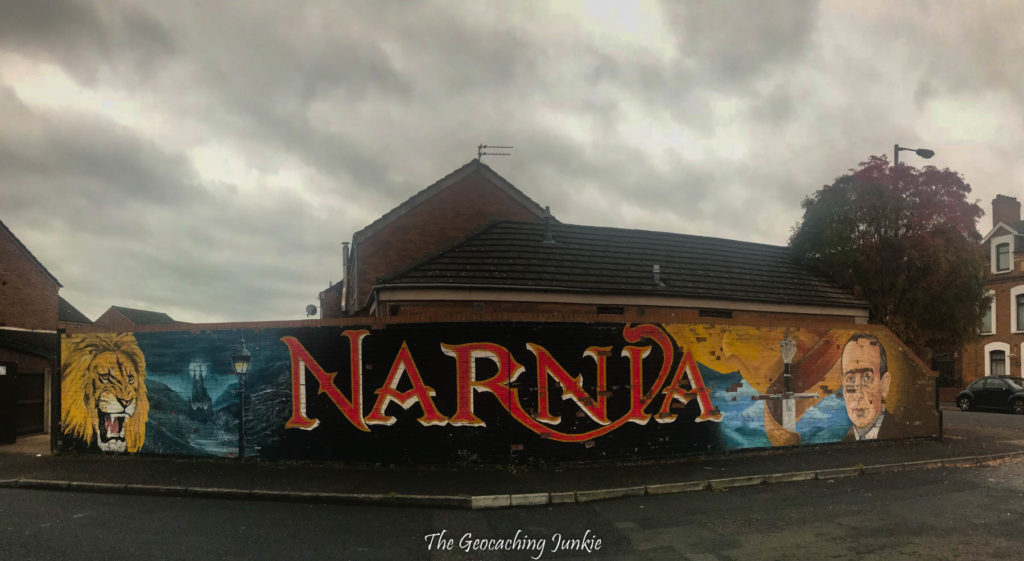 Lewis went to school at Campbell College in East Belfast for two months in 1910 and a lamppost in the school grounds is believed to be part of the inspiration for The Lion, the Witch and the Wardrobe, according to the school’s website. Just off Parkgate Avenue is Ty-Isa (‘the house alone’ in Welsh), which was the home of Lewis’ paternal grandfather, who built a wardrobe for the family.

It was fascinating to find out more about C.S. Lewis and visit some of the places he may have pulled inspiration from when writing his wonderful books. You can download a leaflet detailing the places that inspired Lewis here, and of course, you can let the geocaches mentioned above guide you.